Additional photos of this Norton Manx 30M are available here for your perusal.

Built for a whopping 15 years in long stroke and short stroke variants, the Norton Manx has a long, complicated history that has seen a modern resurgence in popularity for classic motorcycle racing: aftermarket firms specialize in service and parts supply for these classics. If you know the right people, you can even buy a ‘new’ Manx to take racing! But why do that when you can get the real thing?

The Manx started as a Norton International, but then became factory racers in a (successful) effort to dominate the Manx TT on the Isle of Man. As that race was 264 miles long, the bikes were built to last. The Manx was available in 40M (350cc) or 30M (500cc) variants, and we’ve got one of the big boys here.

Norton created small amounts of production bikes that were only made available to select customers to challenge the factory works racers, and they were adorned with some of the best parts England had to offer: the famous Featherbed frame, Amal TT race carb, 21″/19″ flanged alloy wheels, magnesium crankcases, Norton’s Roadholder forks, race-spec fuel/oil tanks with quick-open fillers, and the gorgeous megaphone exhaust.

Pinning down an exact year on this type of machine can be very difficult – it is between 1956-1960, likely between ’56-’59. It was offered up at the 2013 Mid America auction in Las Vegas as a “1950s Norton Manx”, but we are unable to verify if it sold or not as that was the year before Mecum took over and online records are not available. More recently, it was in the possession of Jeff Nash (founder of AMS Ducati), who said it was a 1956 model.

Per Jeff Nash, this is a “1956 Norton Manx R11 500cc”, claimed to be one of 100 ever built and to have been raced by British legend Derek Minter, who passed away in 2015. This bike was on display at the Dallas Progressive International Motorcycle Show in January 2019. 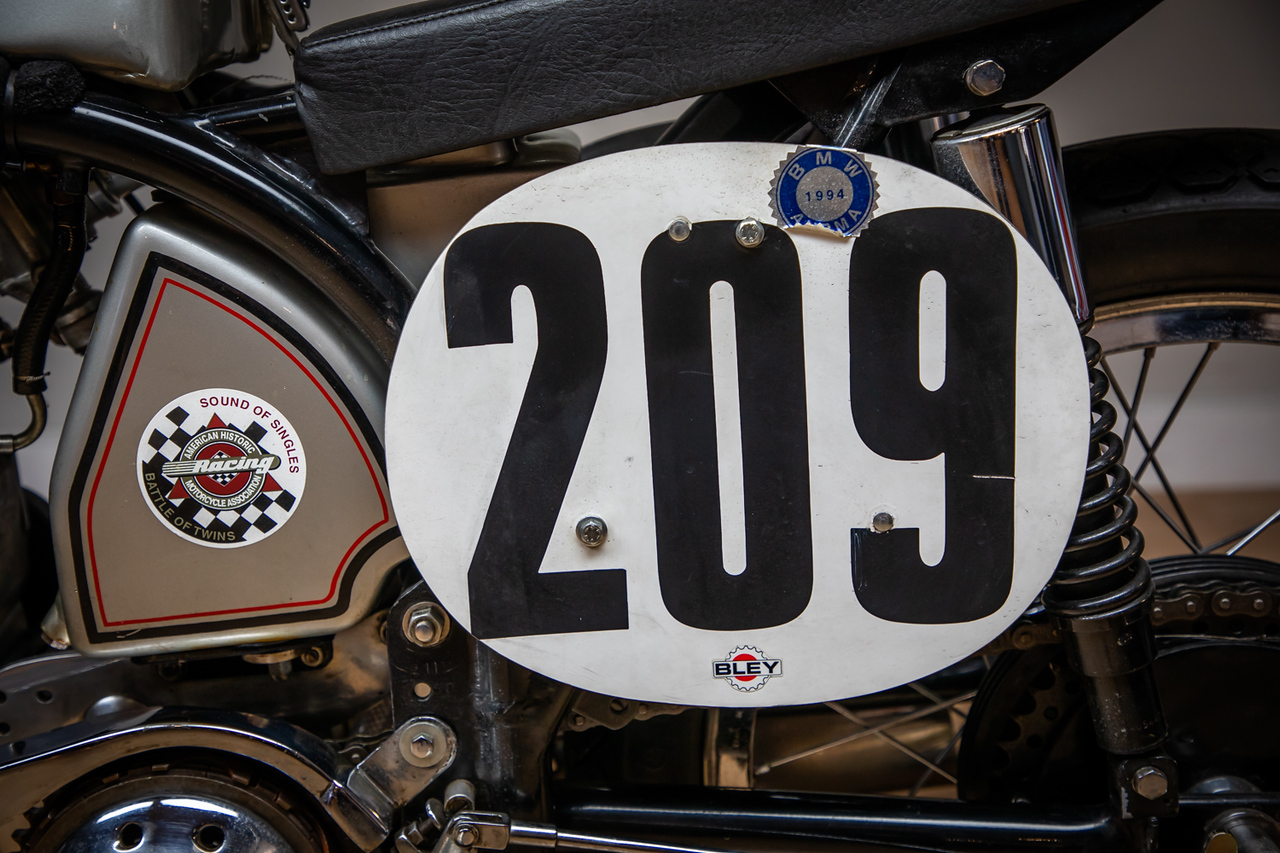 Per Mr. Nash, this “has a completely rebuilt motor and is an excellent example of one of the most successful race bikes ever made.” The current seller adds that it has been checked and started up by Big D Cycle in Dallas, Texas, a well-known shop for old Brit bikes:

He also notes that this machine was previously owned by Bley Racing, who made period correct modifications such as a steeper draft angle on the intake to improve the air/fuel mix and intake flow, and adjustable bracket for the steering damper, and drilling out holes to “add lightness”, as one might say.

Minor cosmetic flaws include a hole in the seat hump, scratches on the right side of the tank, two small paint chips on the edge of the front fender, and some scratches on the exhaust. Photos of all known issues are included in the album above.

This raucous racer would make for a wonderful AHRMA vintage racer or a star in your collection!

This Norton Manx sold for $35,650 on our classifieds. Congratulations!