Additional photos of this Greeves Hawkstone are available here for your perusal. 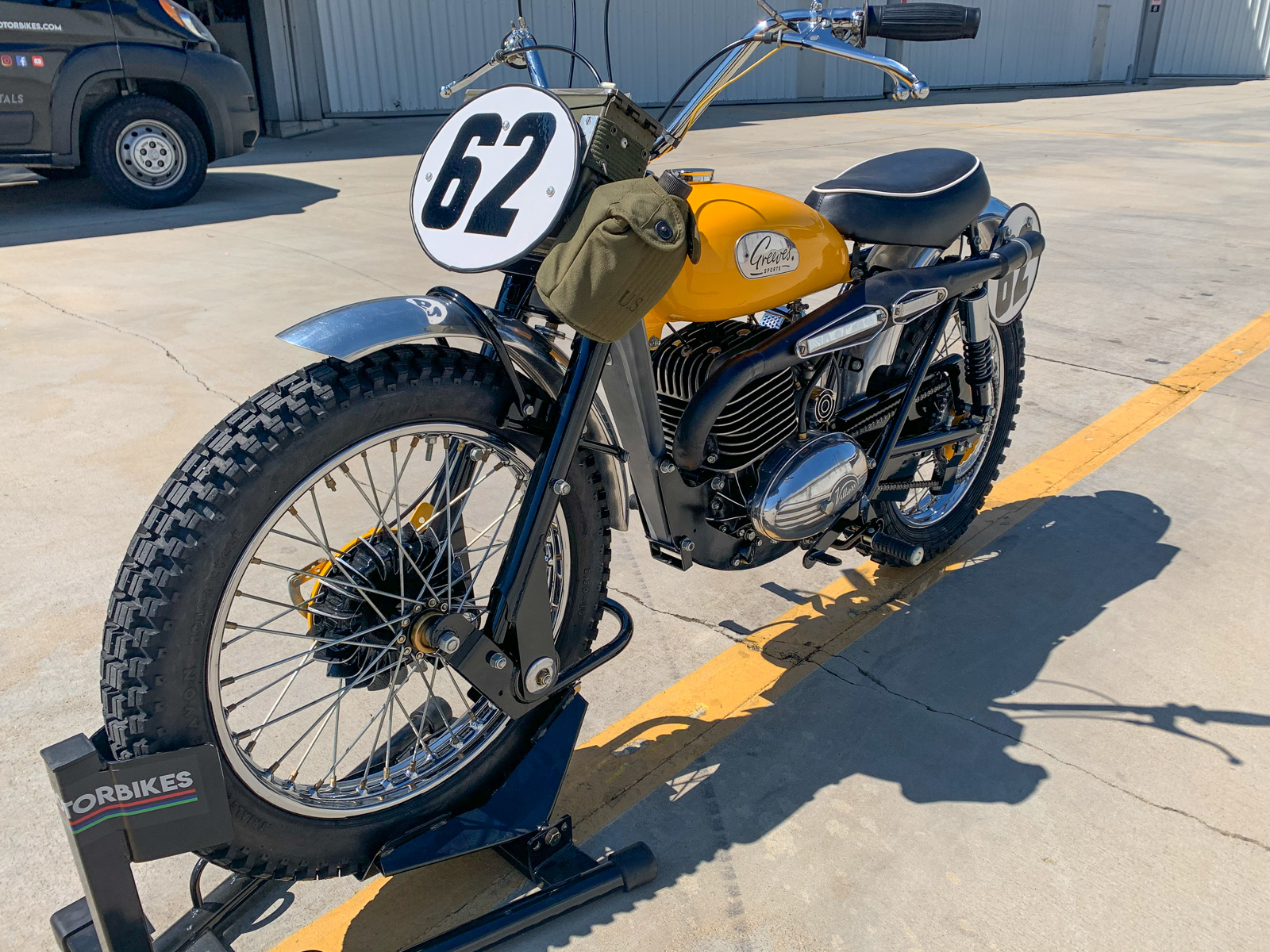 4-4-2020 Update: the seller has provided us with some excellent information from a previous owner – we are presenting it here:

“Lightweight two-stroke motorcycles had been around for a long time. But until the late ’50s, few had the performance and reliability to consistently finish these races- let alone beat the big-bore machines of the day. Greeves got the motorcycling world’s attention at Hawkstone Park in 1957 and started producing this model in ’58 to take advantage of this recognition. 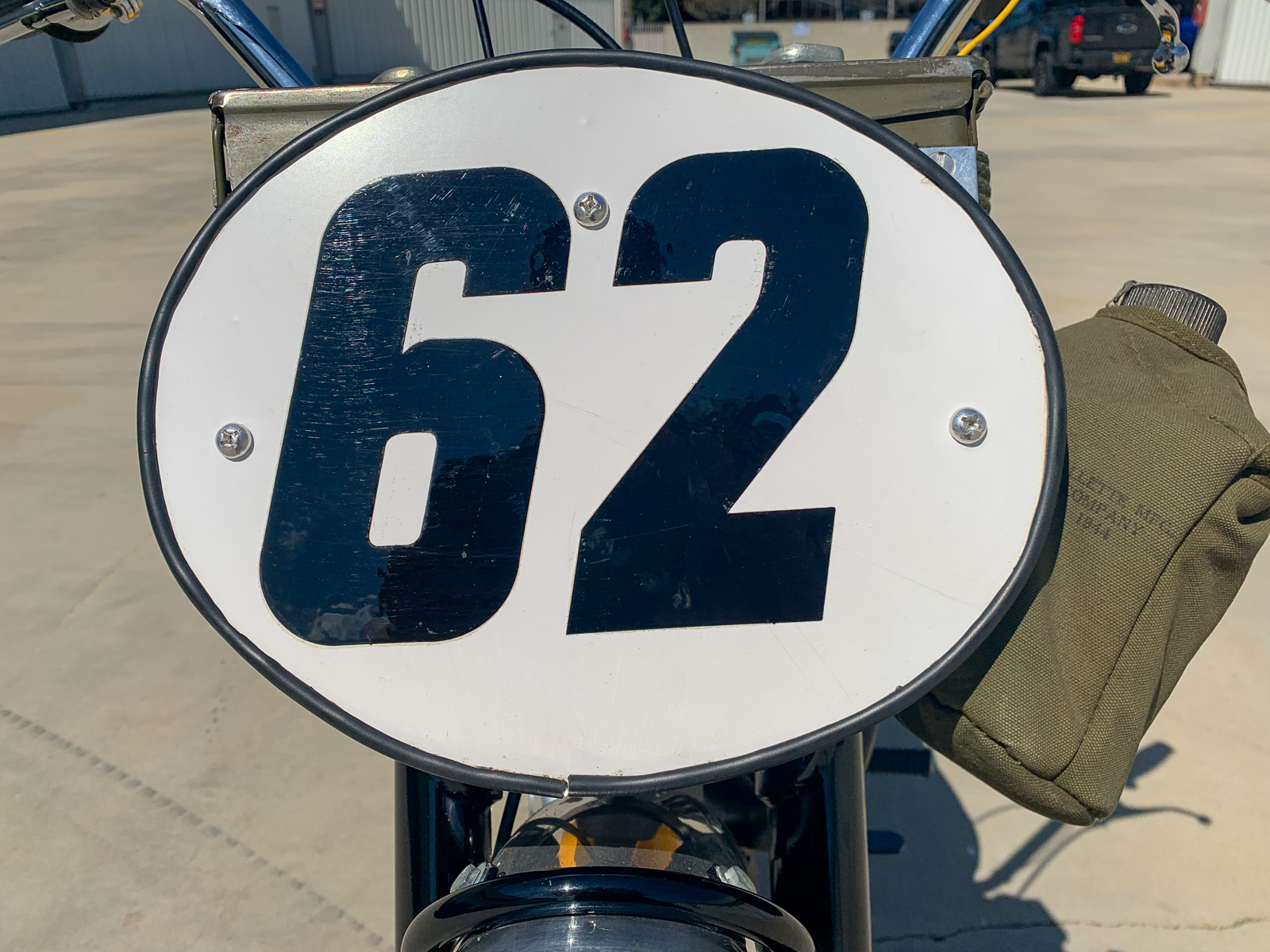 1962 was the last year for the Greeves model called the Hawkstone Scrambler. After all, the 1957 Hawkstone Park victories were fading in peoples memories and the world had decided to call that style of racing by a new name – motocross. The Greeves victories of 1961-62 by Dave Bickers were called “motocross” races. loically, the models that closely replaced the Hawkstone Scrambler were the Motocross Special, the MX1, MX2, etc.

Exact import figures are not available but it is well accepted that a lot of lightweight Greeves motorcycles were brought to the United States in the early ’60s for racing purposes. One popular use was as desert racers in the Southwest. Like the scrambles in England, the sport was dominated by the larger displacement English bikes. The big Brits were powerful and reliable over a long tough race; two traits a desert racing motorcycle needed. But bikes like the Hawkstone were also relatively powerful and very reliable, with the added advantage of being much lighter. 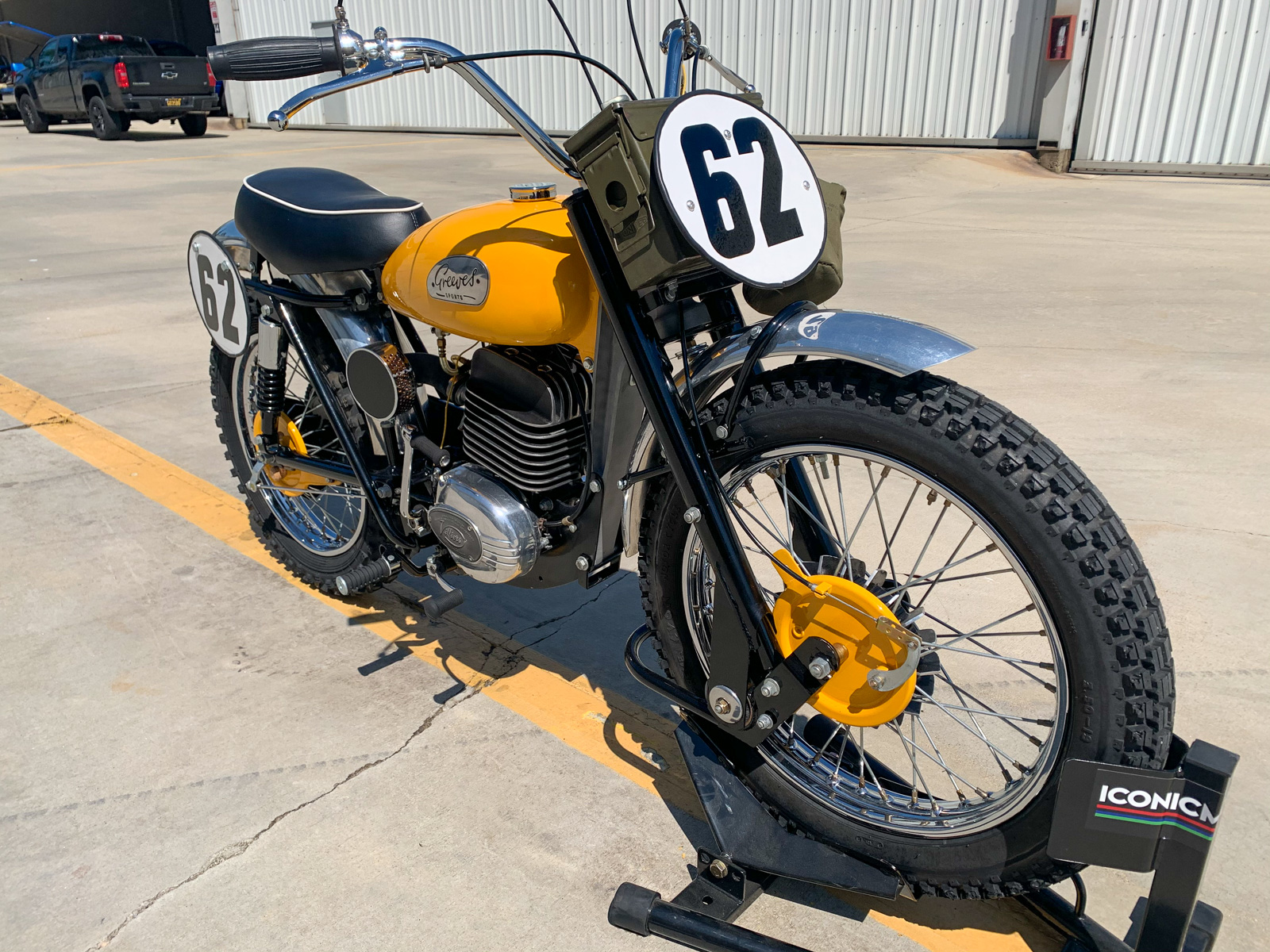 This lighter weight allowed the suspension technology of the day to be much more effective. It also made a huge difference in rider fatigue toward the end of the relatively long desert races. Subject scholars can debate the minutia forever but a fact remains: Greeves and other lightweight motorcycle racers with functioning bikes and functioning bodies started winning and the desert racing scene was forever changed; just like the European scrambles had been a few years earlier.

According to Greeves production records preserved, and based on its vehicle identification number, this Hawkstone (VIN: 24SC105) was the fourth one made of the 1962 model. many old Greeves fans say that 1961 was actually the last year for the Hawkstone. it’s very possible that the Greeves factory just had a lot of parts left over from the 1961 run and only continued producing the Hawkstone model until these parts were gone. Shops like Nicholson Motors in the Los Angeles area were able to sell anything with the Greeves logo on the tank, and it is reported by several riders of the day that many unorthodox Greeves’ were imported and sold.

Originally the bike had a matte, hard-chrome finished tank, alloy fenders, and a frame painted a color named “Moorland” blue. it was a medium blue that looked like it had been mixed with gray. This trim combination was the only one offered for the Hawkstone and several other models Greeves made during the same era.

Americans did to Greeves motorcycles what they had been doing since 1776: take something from England and make it look and work better. Food, machinery, government: they were all modified once they got to this continent. This Greeves was one that got this American makeover- mainly to have it serve in a somewhat new and different function. Racing in the wide-open Mojave Desert is a bit different than track racing the sod hillside scrambles of England. Plus, this is just what we do in this country, we like to change and personalize things for purposes of both form and function.

This Greeves’ full past will probably never be known, unless someone that knows of its past sees the bike and comes forward with the information. The owner that had it from its last racing days until just before I got it, passed away without sharing the bike’s story with family members. When he passed, this Greeves’ history probably also passed. Aside from the obvious new shine and sparkle, I kept this bike virtually identical to the way it looked when it was last running.

I’d also really like to know whose names are engraved on the top fin of the Marcelle cylinder. There is a telephone number engraved in a different location but I’m keeping that to myself for now. I enhanced the engraving with a pencil so it would show in the photograph:

I’d like to think, and maybe know for sure, that the “Nicholson” is referring to Nick Nicholson – a well-known racer of Greeves and other English brands, and the owner of a major Greeves and BSA shop in Los Angeles. Nicholson sponsored and promoted a lot of up and coming racers as the sports gained popularity. A couple of the Nicholson-sponsored riders achieved real fame. “Landy”? Purely a guess, but there was a LA area racer named Bill Landfield who won the Catalina GP on year on a DOT motorcycle. DOT’s used the same Villiers engines as Greeves and it was known that Landfield sported aftermarket road racing parts on his dirt racing machines. I recently met a man that may have known who “Landy” was. He told me that Nicholson’s tuner and porter went by Landy. Positive proof? Decide for yourself but the guy that told me this is married to Nicholson’s daughter…

Greeves purists have already scolded me for how I chose to restore this bike. They squawked, “It’s supposed to be Moorland Blue and have a blooey pipe, not bright yellow with an expansion chamber. And what’s the deal with that military ammo can and canteen on the front? You need to preserve history.” I agree with the last part of that statement, the part about preserving history. I’m just choosing to remember and preserve a slightly different aspect of that history; desert racing in southern California and the spirit and uniqueness of how riders had to make motorcycles of the day work in this specialized application.

The heart of this beast: Villiers innards in Alpha lower-end cases below a Marcelle cylinder and head, being fed by a 389 Amal carb with an adjustable main jet and Webco float-bowl extension. The exhaust is a very early expansion chamber mae by Strader Engineering. This is not a set-up that a casual or weekend dirt rider would have had in Southern California in the ’60s. It would have been a popular and competitive combination for 250cc road racing in Europe, though. The pipe, of course would have been down swept. 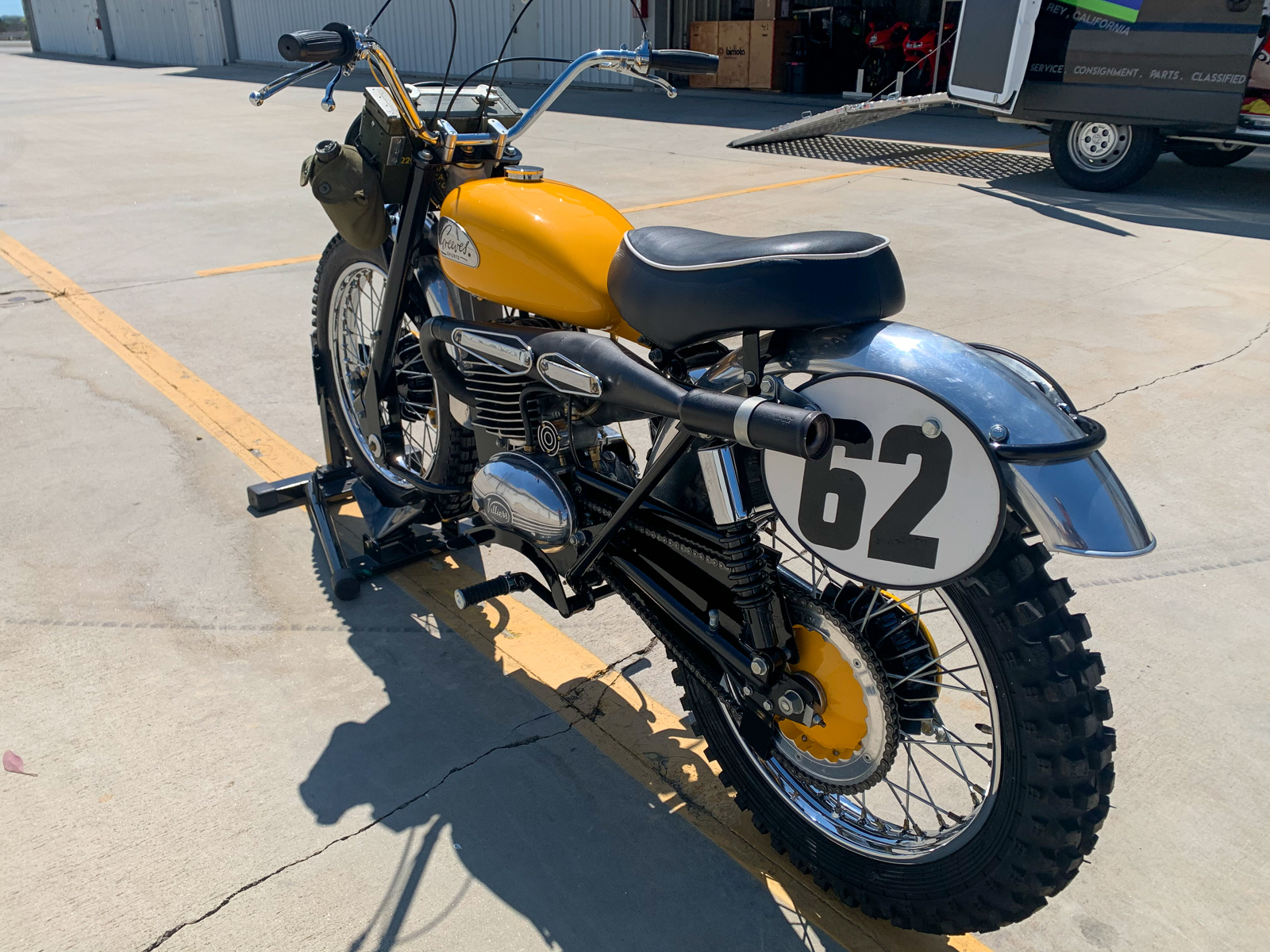 Somebody realized that the engine requirements of an early desert racer were very similar to that of the small displacement European road racers of the day – screw it wide open and hold it there until you see a black and white checkered flag. A wide-ratio four-speed transmission was fitted to this bike, as opposed to the close-ratio model used on road racers. it also has a heavy trials flywheel. 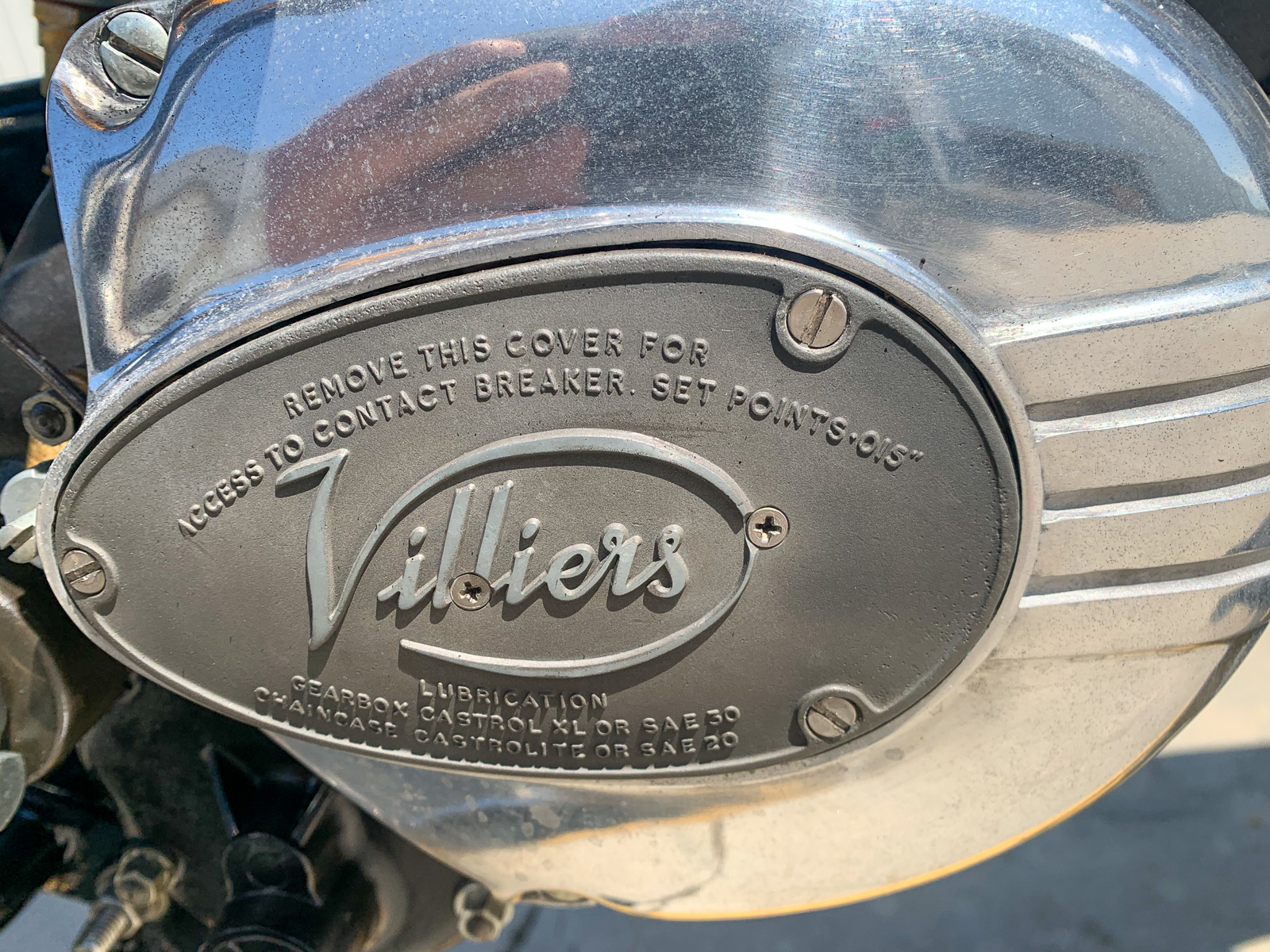 Most recreational dirt bikes and dirt racing machines in the early 1960’s were made at least partially from modified street bikes and street bike parts. High performance and special application parts for dirt racing were nearly non-existent. The gas tank on this bike is a good example. Since most of the different Greeves models of this era had the same main frame segment, the much larger street tank could be bolted right on the Hawkstones for the extended needs of desert racing. originally, it came with a small tank for track racing. the heavy cast aluminum badges I have on the tank are the correct ones for the street tank. They had been sitting on a shelf in an antique store in Scotland for 35 years before the found their way to me through the internet. 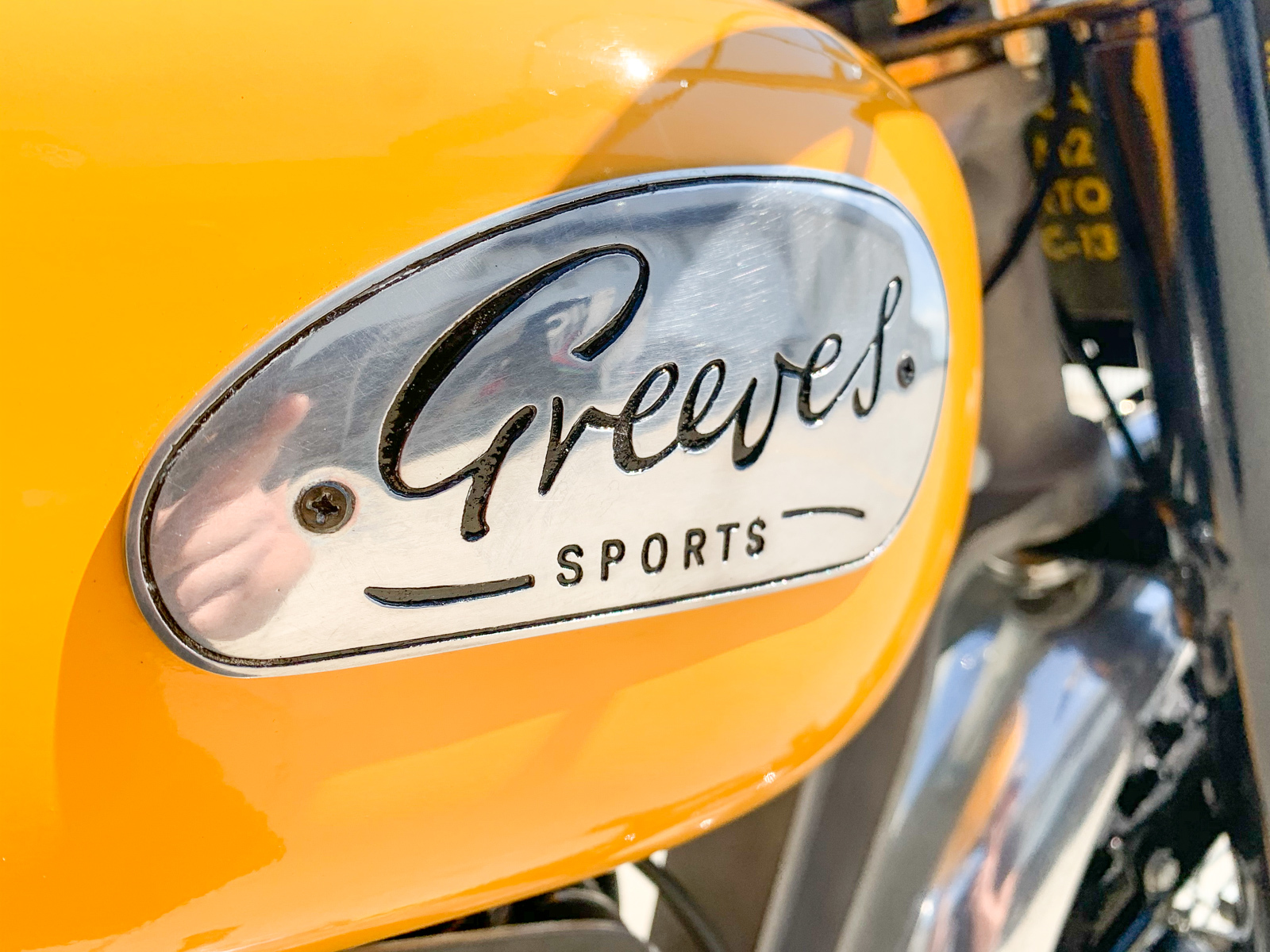 The color? It’s 2008 Toyota FJ yellow. The stock finish on the tank would have been a dull, hard-chrome finish. The tank had been painted yellow and the frame painted black by the previous owner so I honored his taste and kept it that way. Besides, you can’t chrome over bondo, and there was quite a bit of it on this tank. The stock fork stops had been insufficient for the larger street tank and both sides had repaired damage in the front.

I took the Greeves out to Jawbone/Redrock Canyon s in Southern California for a couple of photos. As I used to ride there when I was younger, I couldn’t help but wonder if this bike had screamed past me a time or two; four decades ago. It was fun project and quite the learning experience for me. If I had more time, money, and space I would love to keep it. It’s a unique piece of motorcycling history; and the motorcycle world was forever changed because of those innovative pioneers who made bikes like this and showed the world a new way of doing things.”

If you’re a baseball fan, you may appreciate that the current owner of this machine is Robin Yount, the Hall of Fame shortstop! 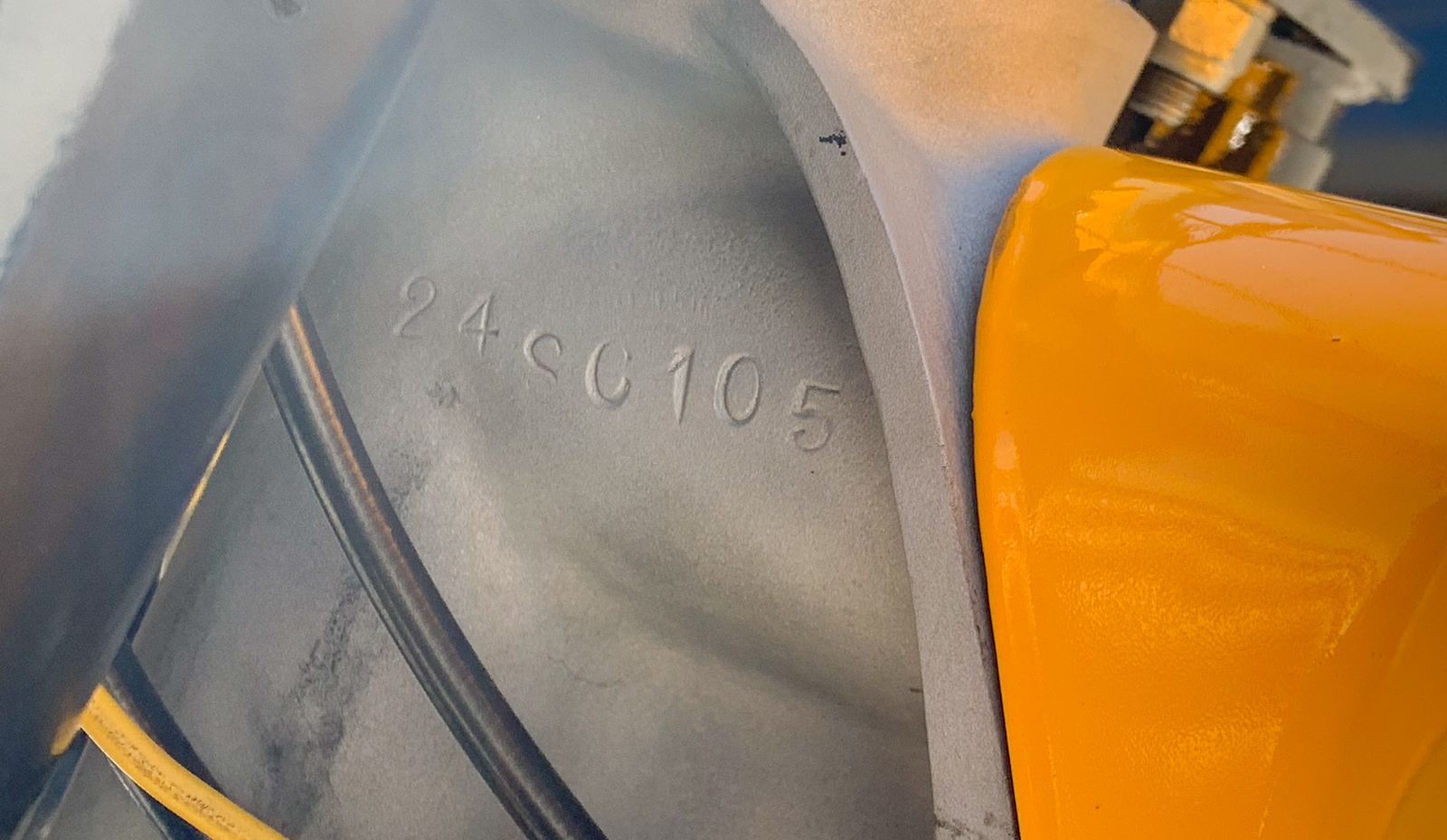 The sale includes a judging score sheet from Classic Cycle Events, where this bike was given maximum points in every category except for tires (9/10 as it had a Barum, OEM was Dunlop) and originality because of the paint, folding pegs, and aftermarket exhaust. 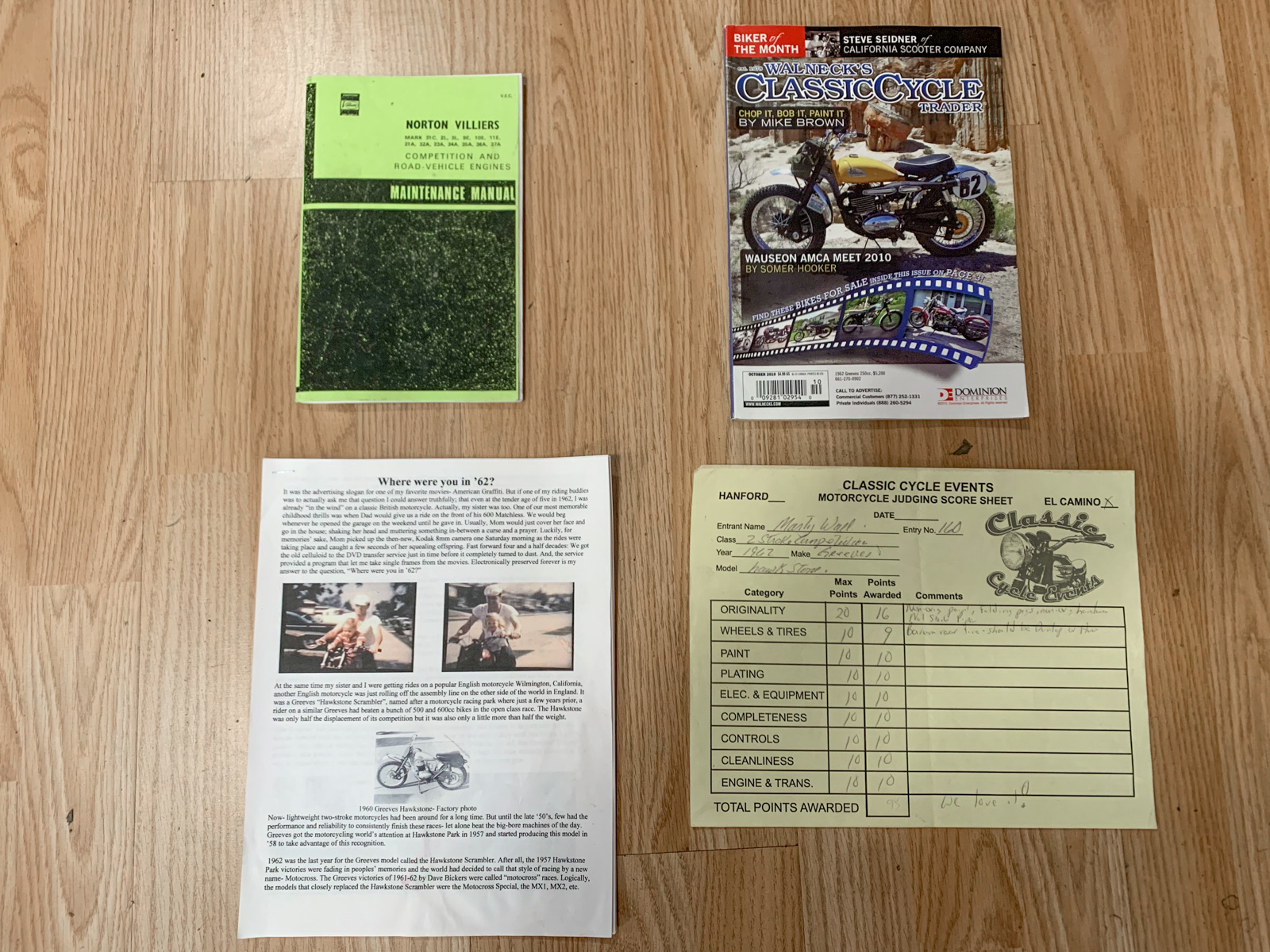 Inside the tool box is a full tool kit and some period Renold spare chain links. 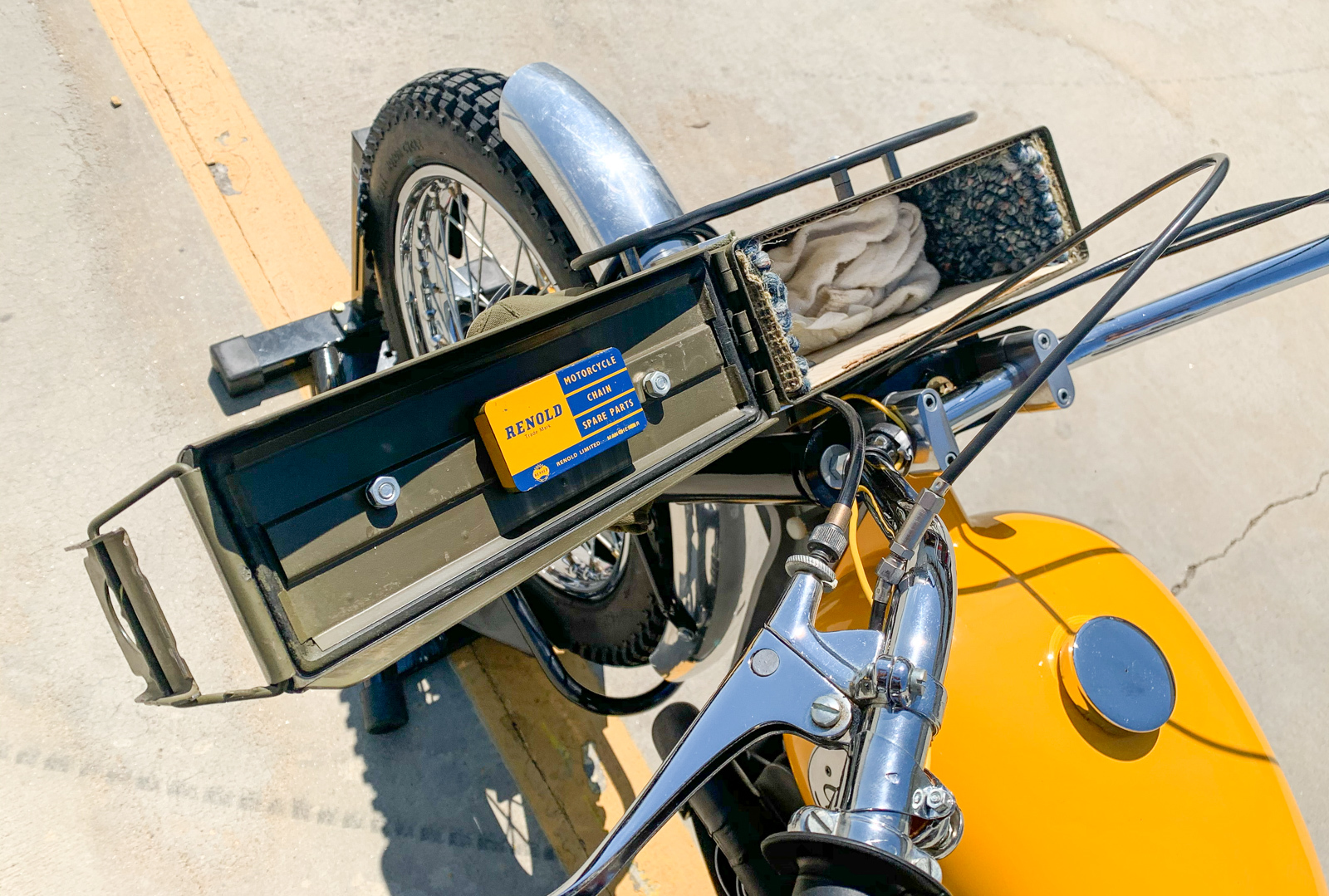 It has been on display for years and is now ready to shine in a new collection – our White Glove service would be glad to make it a runner if you’re interested in getting this beauty dirty again.