Click here for an CycleVIN Motorcycle History Report on this 1965 Honda CB450. Additional photos are available here for your perusal.

The 1969 CB750 takes a lot of credit as being the bike that really placed Honda on the map, and it is very special, but four years earlier the 1965 CB450 was just as revolutionary as its bigger brother would be. Honda had only begun mass producing motorcycles 15 years before the CB450 was designed, just two years earlier they had built their first car and it would be a further five years before they would export any to the United States. The CB450 represents Honda’s big bike foray into the U.S., a market then dominated by Harley-Davidson and a handful of European makes.

Honda was selling a lot of bikes on their way to becoming the worlds largest motorcycle builder but its lineup consisted of mostly smaller offerings until the 1965 CB450. Not only was it a bigger engine in a bigger bike, it packed a lot of technological feats, one of which is being the first mass produced dual-overhead cam motorcycle. The 444 cc twin air cooled engine produced around 43 horsepower which was enough to give it a claimed 110 mph top speed. It sported a 4 speed transmission and both kick and electric starting. It’s “Black Bomber” moniker is derived from the fact that Honda only offered it in one color in 1965. The CB450 was designed to take on the British bikes of the day, and it is credited with not only beating them, but quite literally putting them out of business. It made good power and had Honda reliability, fairly heavy at a bit over 400lbs it had few other other faults and a lot of fans, it would stay in production with continued improvements until 1974.

The seller notes that “true mileage is unknown. The clock was replaced some time back with a NOS clock.”

Modifications: The seller describes the bike as being a very original survivor: “It is in great original condition. This bike is all original and not restored. It is wearing a 1967 seat vs the 1965 due to preference and ride height.” The seller does note that it has an upgraded rectifier.

The seller has owned this bike for about six months and has put about 600 miles on it. He purchased it as part of a lot of several bikes from a collector and is selling this CB450 to focus on other bikes in their collection. The seller claims the prior owner had this bike for 30 years and it has seen a small number of owners over its lifetime.

10-25 Update: As pointed out in the comments, there was a missing stud and nut on the right header. The seller has fixed that with TIME-SERT. “I made the time sert repair today and it came out very nice. Better than new. Looks factory and is much stronger used OEM hardware.” 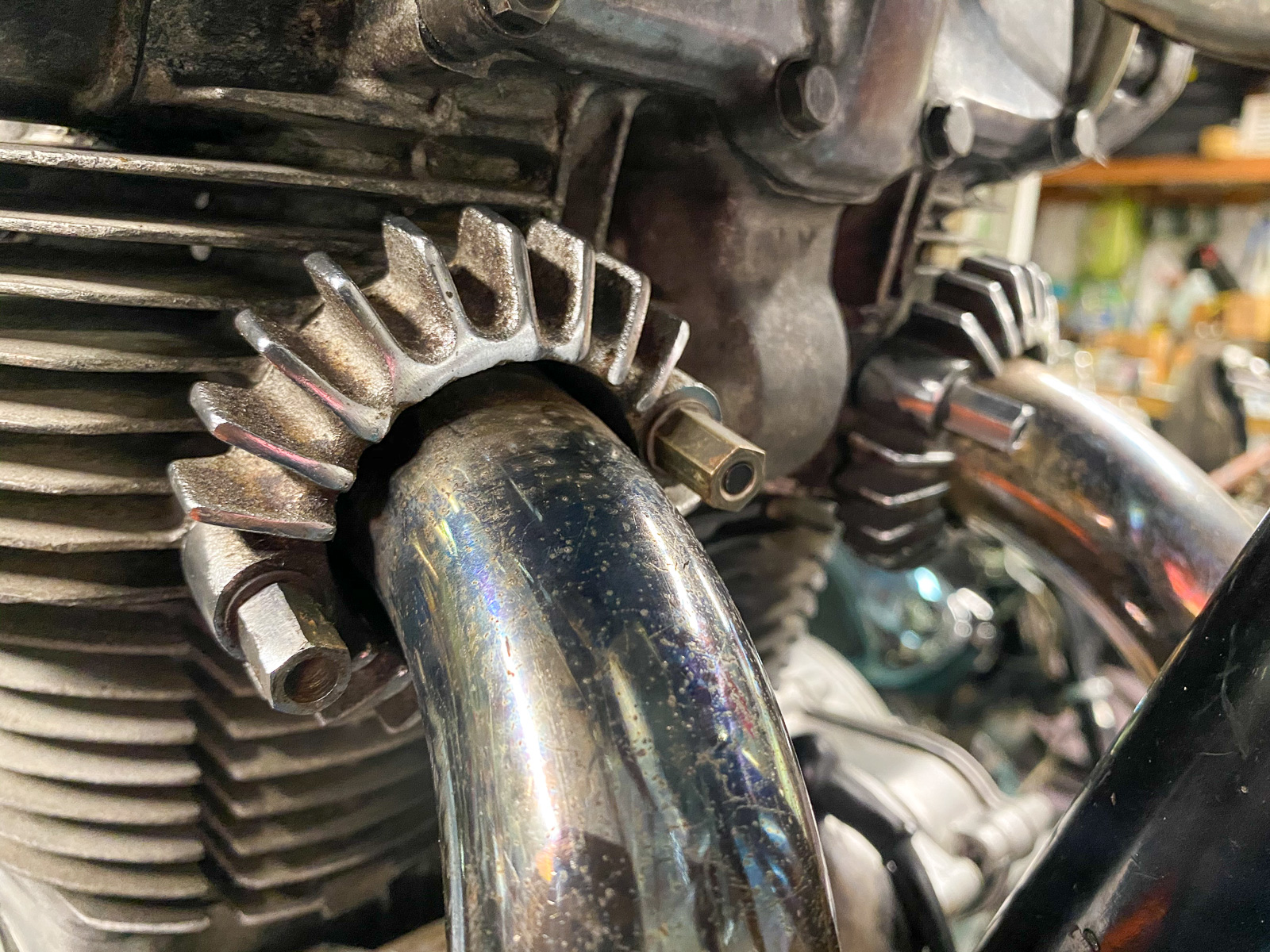 Cosmetic Blemishes: The bike shows some light rash on the foot peg and brake lever.

Small dings and scratches on the right exhaust pipe.

Light corrosion on some engine parts.

Currently located in Oakland, California this Honda is offered on a clean California title. Have any CB450 stories or questions about this listing? Let us know in the “Comments” tab!