Additional photos of this 1978 Kawasaki Z1000S are available here for your perusal. 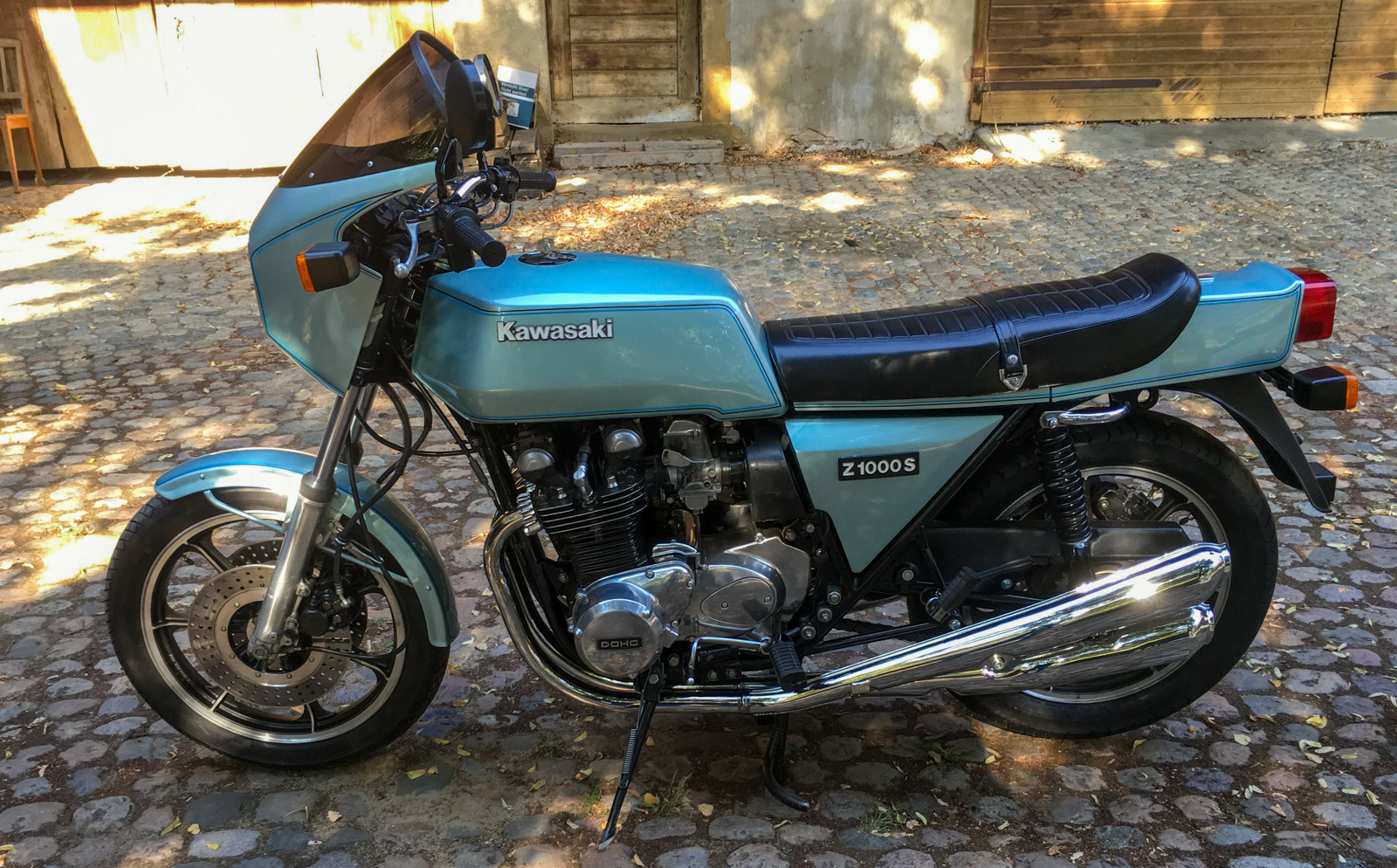 Considered “the father of the Japanese cruiser”, Wayne Moulton had quite a career in the motorcycling industry, including roles as President of Triumph Motorcycles America and Vetter Fairings as well as Vice President of Kawasaki. He was known for a philosophy that “a popular motorcycle can have four different variations – a standard, a limited, a cafe racer and a touring bike.” One of his projects was the Kawasaki Z1-R, a sport-tourer based on the Z1000 with a smaller front wheel, cockpit fairing, and Stardust Silver paint job.

The Z1-R debuted in 1978 with some tweaks that yielded a claimed 90 horsepower at 8,000 rpm and several Kawasaki firsts such as self-canceling turn signals and the chin fairing – the latter was a first for any Japanese motorcycle. For a great recap of the Z1-R, check out this profile on Motorcycle Classics – because today we’re going in a slightly different direction.

As you’ll see on the sidecover of this machine, this Kawasaki is not a Z1-R. It’s a Z1000S, a model name which won’t be familiar to the average American Kawasaki fan. The seller researched the model in-depth after running across one for sale in Europe years ago – here is his account:

The Kawasaki Z1000S was made by Kawasaki Germany in 1979 in an effort to get rid of some of their excess Z1-R inventory, which were stacked up by the hundreds, literally in warehouses, around Germany. They marketed this model to riders who wanted more range in their Z1-R than what was provided by the very small original 13 liter tank. The most noticeable differences between the Z1000S and Z1-R being the four into four exhaust, the 24 liter touring fuel tank, and the Z1000S bespoke badges.

1. The Z1000S fuel tank was made to order for Kawasaki Germany on the original base plate (as provided by Kawasaki Japan) of a stock 13 liter Z1R tank which a German company (a company called Haberman, who was already experienced in building larger capacity tanks for BMW models) extended with all new sheet metal and internal baffles to produce a very good looking 24 liter tank that still resembled the silhouette of the original 13 liter fuel tank (see photographs below for a comparison between the 24 liter tank and the OEM 13 liter item). For ease of design it was fitted with a weld-in bayonet type locking fuel cap ring, taken from a VW Golf of the period, this small pressed sheet metal piece, incorporating the bayonet fuel cap, was inexpensive and readily available in Germany from VW parts suppliers.

OEM 13L tank for reference (not included in sale)

2. In order to properly fit the original four into four exhaust system, designed for the Z1 and KZ900 range, Kawasaki Germany opted to modify the stock Z1-R frame of the German model (different from the international model in certain aspects already) at the footpeg/exhaust-mount triangle to accommodate the pillion foot rests and the exhaust mounting in the same area without inferring with one another. Kawasaki Germany basically just copied the original setup known from the 1975 H2 750 model due to its simplicity. According to Tony Sculpher’s book Z1-R Restorations up to 11 bikes were built by Kawasaki Germany until they discovered that it was too complicated and expensive for the dealers to perform on their existing inventory as it entailed paint removal, welding, sanding and repainting of the area on the frame. It was also questionable if the German TÜV was going to allow this change without further approval as it affected the German version of the frame. In light of these problems Kawasaki Germany opted to offer the Z1000S conversion as a kit to dealers sans frame changes. As a result only ~11 fully modified Z1000S’ were completed by Kawasaki Germany.

3. The emblems for the tank were taken from the 20 liter fuel tank Kawasaki already had in the spare parts list. They are not in italicized font as found on the standard Z1R 13 liter tank emblems.

The Z1000S kit was then offered to German Kawasaki dealers to retrofit onto customer bikes, however out of the 200-250 kits that were distributed, no customer bikes had the previously listed frame modification due to the high cost and the resulting frame repainting requirement. Even the 4-4 exhaust was later dropped as a result of Kawasaki Germany realizing that there was interference with the Z1-R rear brake setup, and an engineering memo was released to all Kawasaki dealers to inform them NOT to install the 4-4 exhaust system on Z1-R’s due to these problems.

The Z1000S story is explained on a few websites as well as in Tony Sculpher’s definitive book about the Z1-R.

This example (VIN: KZT00D-015049) has approximately 12,900 kilometers (8,020 miles) on the odometer, and it presents well. The seller acquired this machine 6 months ago out of a collection in Holland, where it spent the last decade plus in dry storage. It will need fluids before it runs again.

Fans of the Z1-R would find the details fascinating as there are several small changes to ensure that the bike was compliant with German safety regulations – there are two rear foot peg mounts on each side, one to mount the special 4-into-4 exhaust, the other for the actual foot peg. There’s a cutout switch for the sidestand on the left handlebar. The gear change lever has a different shape. All of these things come together to make a collectable Kawasaki.