Additional photos of this 1985 Suzuki GSX-R750F are available here for your perusal.

In 1982, Suzuki began development of what would become a total game-changer of a sportbike and the first bonafide Japanese race-replica. Dubbed the GSX-R750, the new road-legal track weapon was unlike anything that had come before it. It was crazy lightweight, brimming with componentry previously only seen on race machines, yet it sold for a shockingly affordable price. But the tale of the Suzuki’s race-bred bikes and the first Gixxer began in the 1950s.

The manufacturer actually started out as Suzuki Loom Works, but in 1954 officially they incorporated as Suzuki Motor Co., Ltd. After WWII, motorcycles were becoming increasingly big business in Japan, but with more than 200 motorcycle companies on the island in the late 1950s, distinguishing yourself from the completion was a must. So Suzuki did what all great marques have done to prove their worth; they went racing. In 1955, the brand debuted its first true motorcycle, the 125cc two-stroke Colleda. It then set its sights on the famous Mt. Asama Volcano Race, a grueling 14-lap 80-mile event, and at the time the biggest race in Japan. In preparation for the 1959 race, Suzuki had eleven mechanics and four test riders spend 12 weeks living in a small wooden shack on the mountain. Suzuki didn’t win the race – only one of the five bikes it entered even finished. Suzuki did, however, manage to set the fastest lap time of the entire race, proving the Hamamatsu firm had serious potential.

The following year in 1960 Suzuki entered the Isle of Man TT for the very first time with its new 13 hp RT60 racer. Suzuki spent ’60, ’61, and ’62 ironing out the kinks, and in ’63 won its first TT (50cc Class) with Mitsuo Itoh — the first Japanese rider to win a TT – at the helm. There was no doubt about it, Suzuki had become a legitimate contender on the world stage. Fast-forward another two decades and Suzuki had continued to refine its machines, both for the street and the track. Suzuki was looking to develop a winning four-stroke model, and as per usual turned to its race program for the answers. Using lessons learned from experience in TT-F1 and Endurance efforts, the blueprints for a new 750 began to emerge.

The Gixxer’s engine was another major highlight, having taken lessons from the Suzuka-winning GS1000R (aka XR69) works racer. The 747cc, 16V, DOHC, inline-four featured flat slide carbs, Suzuki’s new TSCC (Twin-Swirl Combustion Chamber) cylinder head, DAIS (Direct Air Intake System), and magnesium rocker covers. One major area that set the 750 apart and allowed it to be so lightweight was its cooling system. Designed by Suzuki engineer, Etsuo Yokouchi and known as SACS (Suzuki Advanced Cooling System), the setup used the engine’s oil injection to cool the cylinder head and pistons and air to cool the cylinders. SACS could achieve the efficiency of a water-cooled system without the considerable weight.

Paired with a six-speed gearbox with hydraulic clutch, the three-quarter-liter mill generated 106hp at 10,500 rpm and around 50 ft-lbs of torque at 8,000 rpm – good for a top speed of 160 mph.. In race trim (when equipped with the factory tuning kit), the GSX-R750 put down a whopping 130 hp. Weighing in at just 388 lbs, the GSX-R750 was around 70 lbs lighter than its three-quarter-liter competitors like Yamaha’s FZ750 and Kawasaki’s Ninja 750. With the power of a liter-bike that tipped the scales at less than your average 600, the Gixxer was incredibly nimble and flickable, with its 5.5-inch ground clearance and narrow construction affording a cool 55-degrees of lean angle. 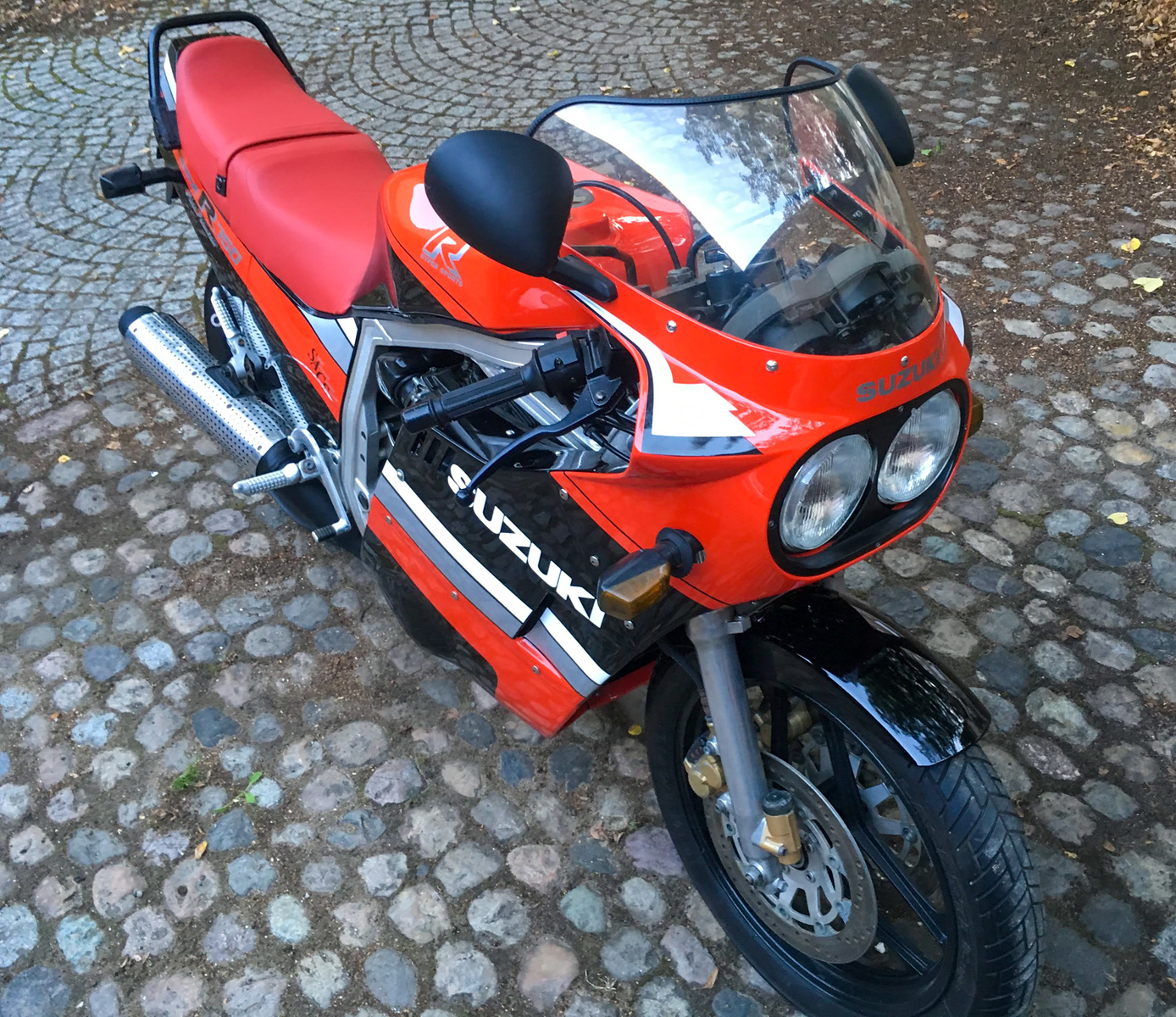 On top of its stellar performance, the ‘Zook also looked the business. Its bodywork was incredibly aerodynamic, having taken inspiration from the company’s factory endurance machines with its twin headlights, four-into-one race exhaust, and boxy tail section. Even the livery stems from Suzuki endurance racers of the era.

Suzuki pulled the cover off the first-year GSX-R750 (model code: F) at the 1984 Cologne Motor Show, before its official launch in March of 1985. Upon its release the Gixxer was unquestionably king, setting a new benchmark in the industry. And unsurprisingly, it didn’t take long for the GSX-R to start winning on the race track. The new model won the 1985 TT with rider Mick Grant, while a young Kevin Schwantz straight up dominated the Transatlantic series. Today, Suzuki continues producing its GSX-R750 line, but the original Gixxers now enjoy legendary status. Regarded as a tried and true classic of a sportbike, the first GSX-R is a must-have on practically every collector’s list. While all early GSX-R750s are coveted, the inaugural 1985 models are easily the most highly sought after, and for good reason.

Not only are they the very first in a long and iconic line of motorcycles, but the first-year version boasted a few unique features. For starters, it featured a two-piece seat, unlike every year that followed. In 1986, Suzuki also slightly toned down the potent engine, making ’85 specimens the one you want. This is especially the case in America, as the “F” model was never officially sold in the US.

This particular example is not only a first-year eighty-fiver, but it’s also an original Japanese domestic market version. That means that unlike the US models, this bike sports Japanese running lights and a fuel-gauge, as well as blacked out mirrors, signals, and belly-pan. Sold with the original factory keys and owner’s manual, this example is 100% bone stock and is exactly as it was when it left the factory more than a quarter-of-a-century-ago — with the exception of MPH stickers on the speedometer and the period-correct Metzeler Lasertec tires.

All of the paint and bodywork is completely original and in fantastic condition. With just 18,215 original miles, this bike goes as strong as it looks. Aside from zero-mile examples (which there are very, very few of) first-year JDM GSX-R750’s really don’t get any sweeter — or rarer — than this F-model. This specimen is being offered with a clear Arizona title, though our White Glove service is happy to help with DMV transfer paperwork.

What is the hp of an 85 “F” model from the Japanese market? Japan had hp restrictions, right?

@ShelbyPhoenix – Correct, they did. Per this site (an excellent resource for Suzukis), the Japanese model produced 77 horsepower.

Should read “wherever distributed”