Additional photos of this Honda NSR250 MC18 are available here for your perusal. 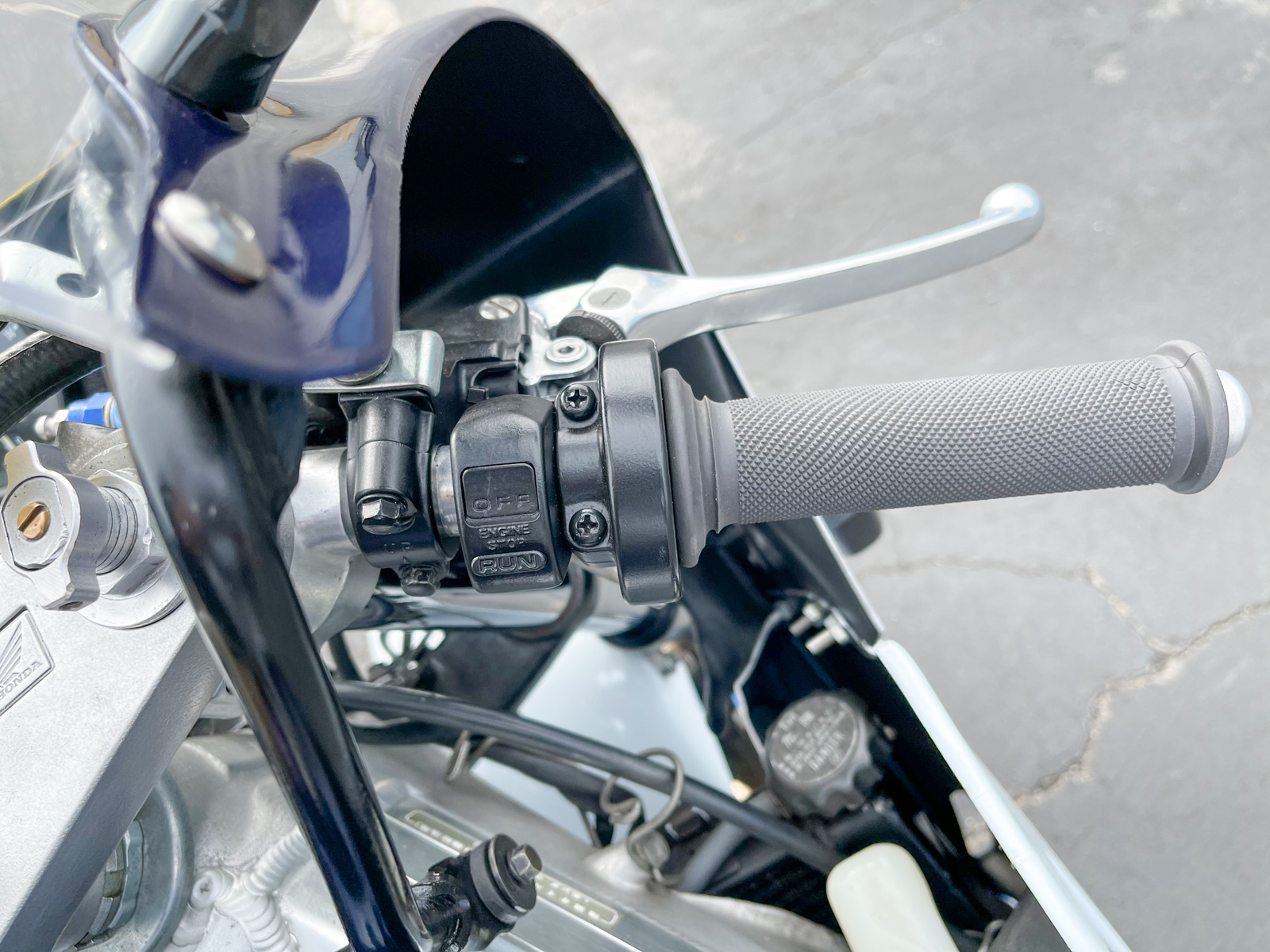 The NS was well-received, but it was up against some fierce competition. So Honda quickly went back to the drawing board and released the MC16 in 1986, then the MC18 a year later. The first MC18 (aka the PGM-1) used a redesigned two-stroke 90-degree V-Twin, though it boasted the first digitally-controlled two-stroke carb setup on a production road bike — a feature only bolstered by the RC valve system.

The MC18 also got a revised pentagonal section aluminum alloy frame with a removable subframe, dual drilled floating 276mm discs bit by cast aluminum four-piston Nissin calipers (and a single 220mm disc in back), telescopic forks with preload adjustment, Pro-Link rear suspension, and six-arm aluminum alloy Enkei wheels. The MC18’s bodywork also received a minor facelift based on the 1988 season’s NSR500 GP bike. Japanese restrictions meant horsepower was still capped at 45 out of the box, though the MC18’s potential was a lot easier to unlock. With a few simple modifications, 60 hp could easily be achieved.

Three months after the initial release of the PGM-1, Honda released the up-spec’d SP edition. Short for “Sport Production”, the SP was available in a works racer-style Rothmans livery and came from the factory with gold Magtek magnesium rims. The seller acquired this bike from a Japanese importer three years ago and restored it as a “SP Tribute” with replica bodywork and genuine Magtek wheels.

“All the typical corrosion was dealt with by either painting/polishing/clear coating.”

The following parts were purchased:
New aftermarket Rothmans bodywork. The tank is a cover. 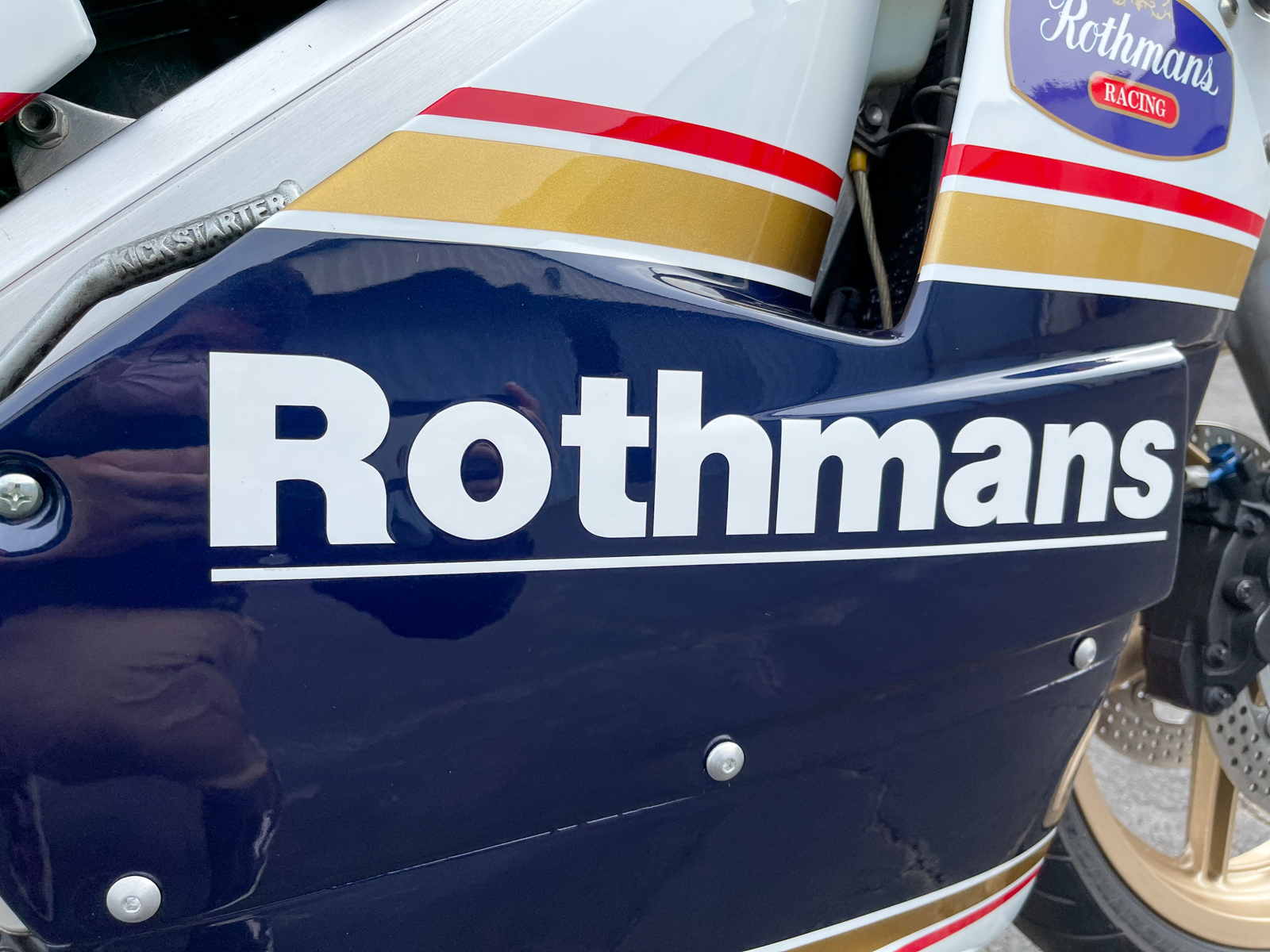 In addition, the rear brake master cylinder and the carbs were rebuilt, and the rear seat was re-upholstered. 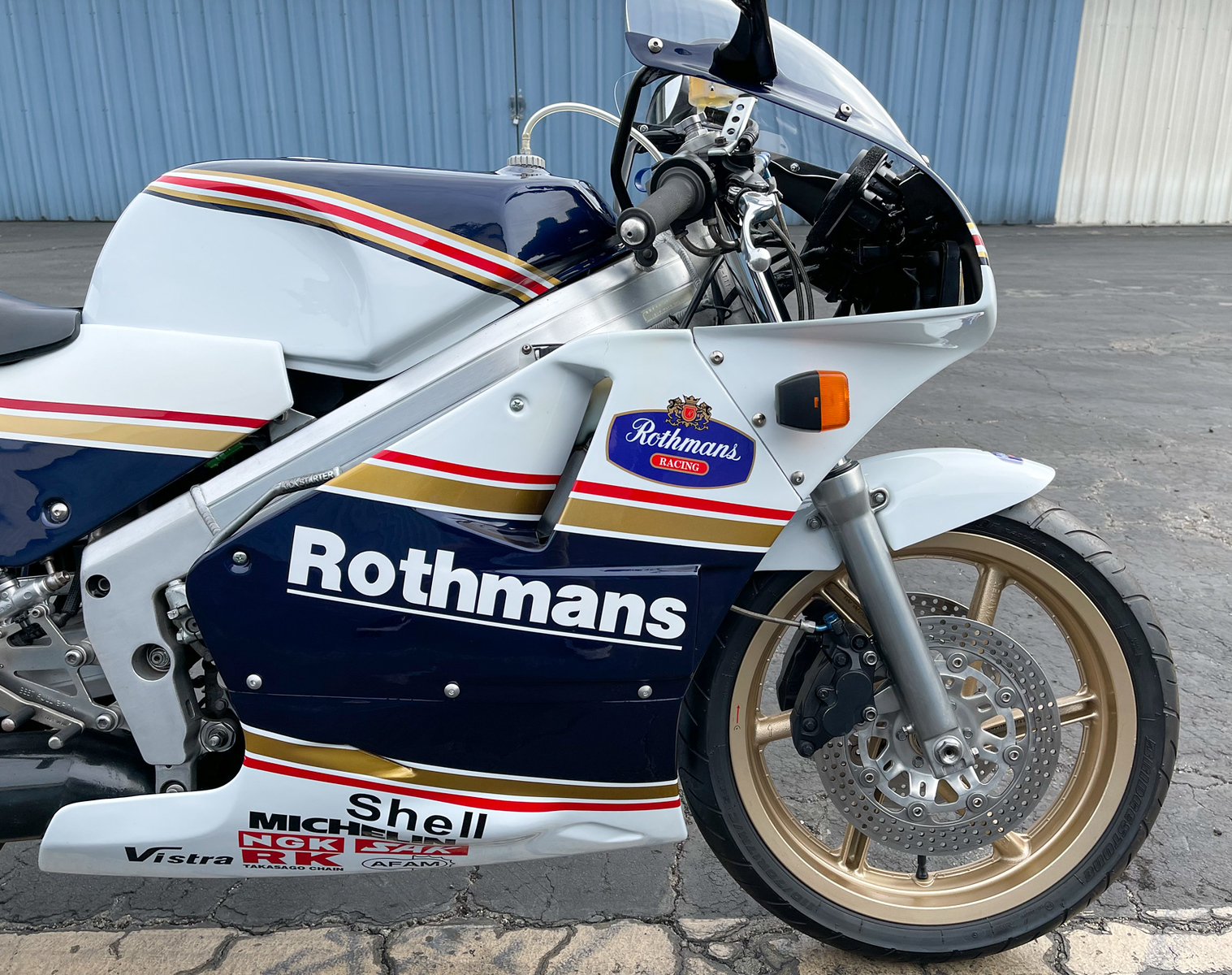 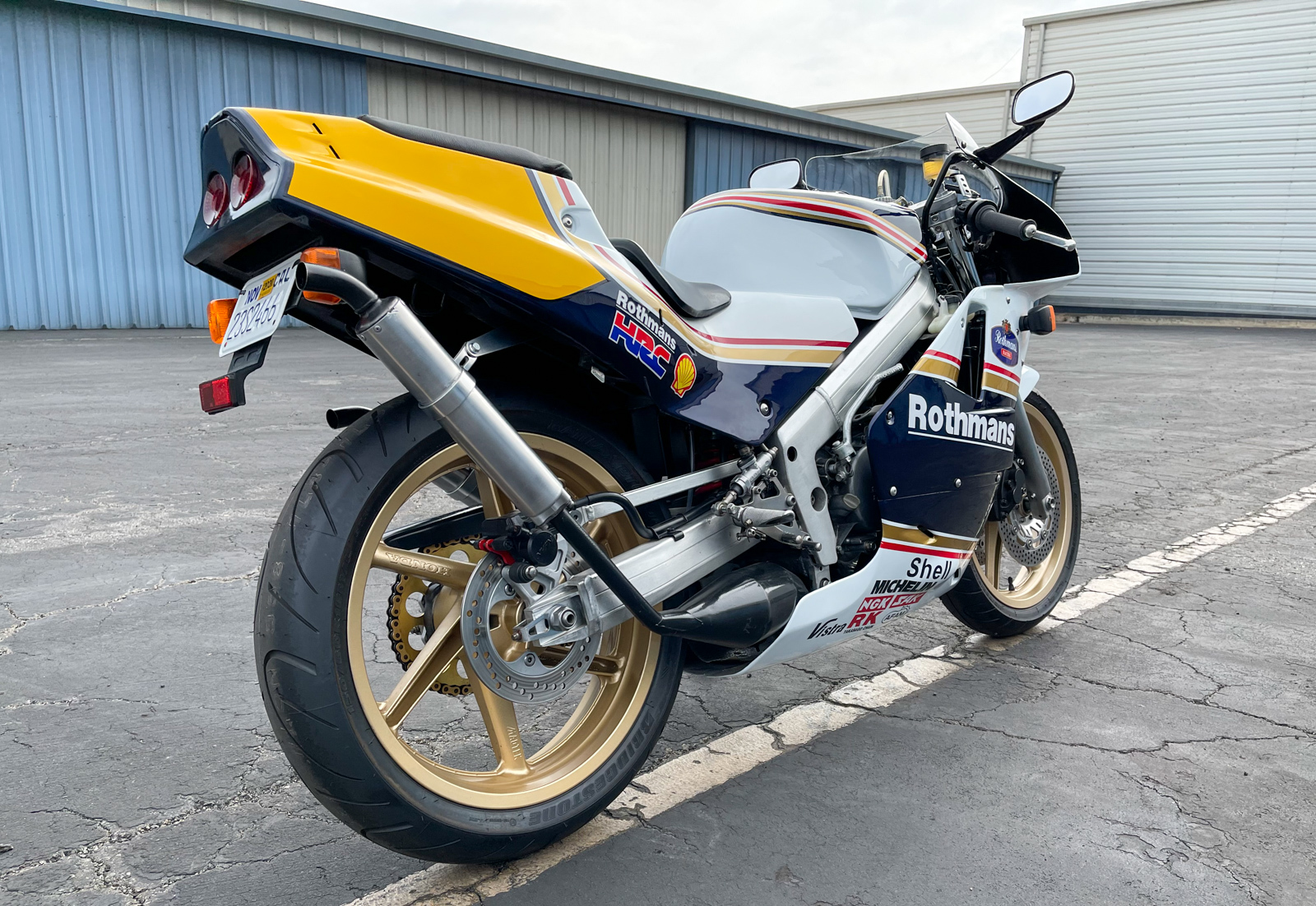 Before listing it on the auction site, the seller had us go through the bike and perform the following: replace the fork seals, clean and sync the carbs, clear a carb vent line, adjust the pipes to clear the bodywork and rear turn signals, install a front brake lever, and install a battery.

Currently located at our facility in Santa Monica, California (please make an appointment for an inspection), this NSR250 is offered on a clean California title with registration current through November 2021 (the seller is mailing us the current tag sticker). 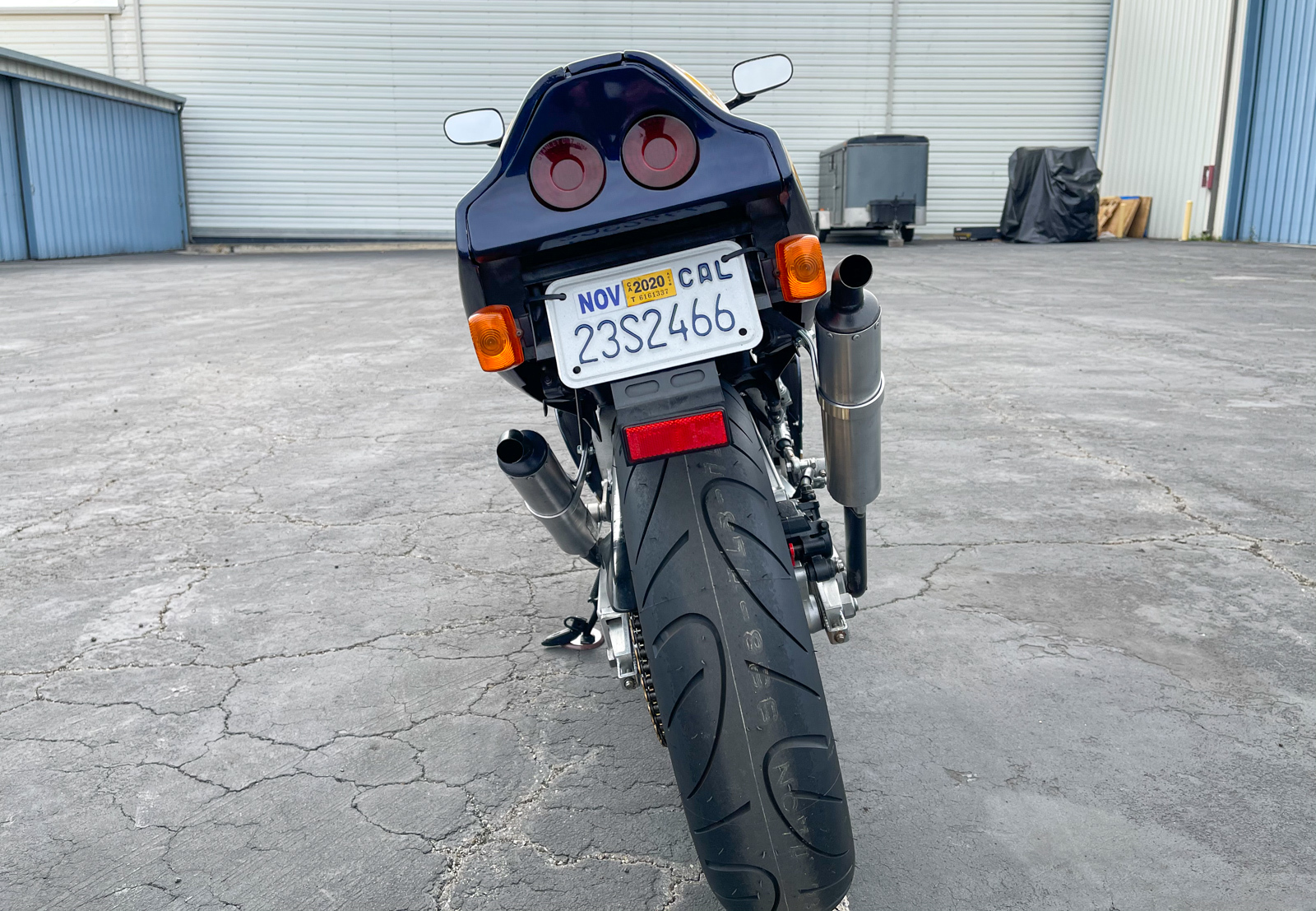 Have any NSR250 stories or questions about this listing? Let us know in the comments!