Essentially a scaled-down version of Honda’s legendary RC30, the VFR400R, or NC30, was a race-bred 400cc superbike introduced in the late 1980s. A smaller and cheaper alternative to the VFR750R, the 400 still possessed the same bodywork and livery as the 750, as well as its stellar reliability and fit and finish which had become Honda hallmarks.

The VFR400R was created for the Japanese domestic market, though it was officially sold in parts of Europe for a time in limited numbers. Produced until being phased out in ’94, the NC30 wasn’t ever sold in the US, though grey market examples have found their way to our shores. 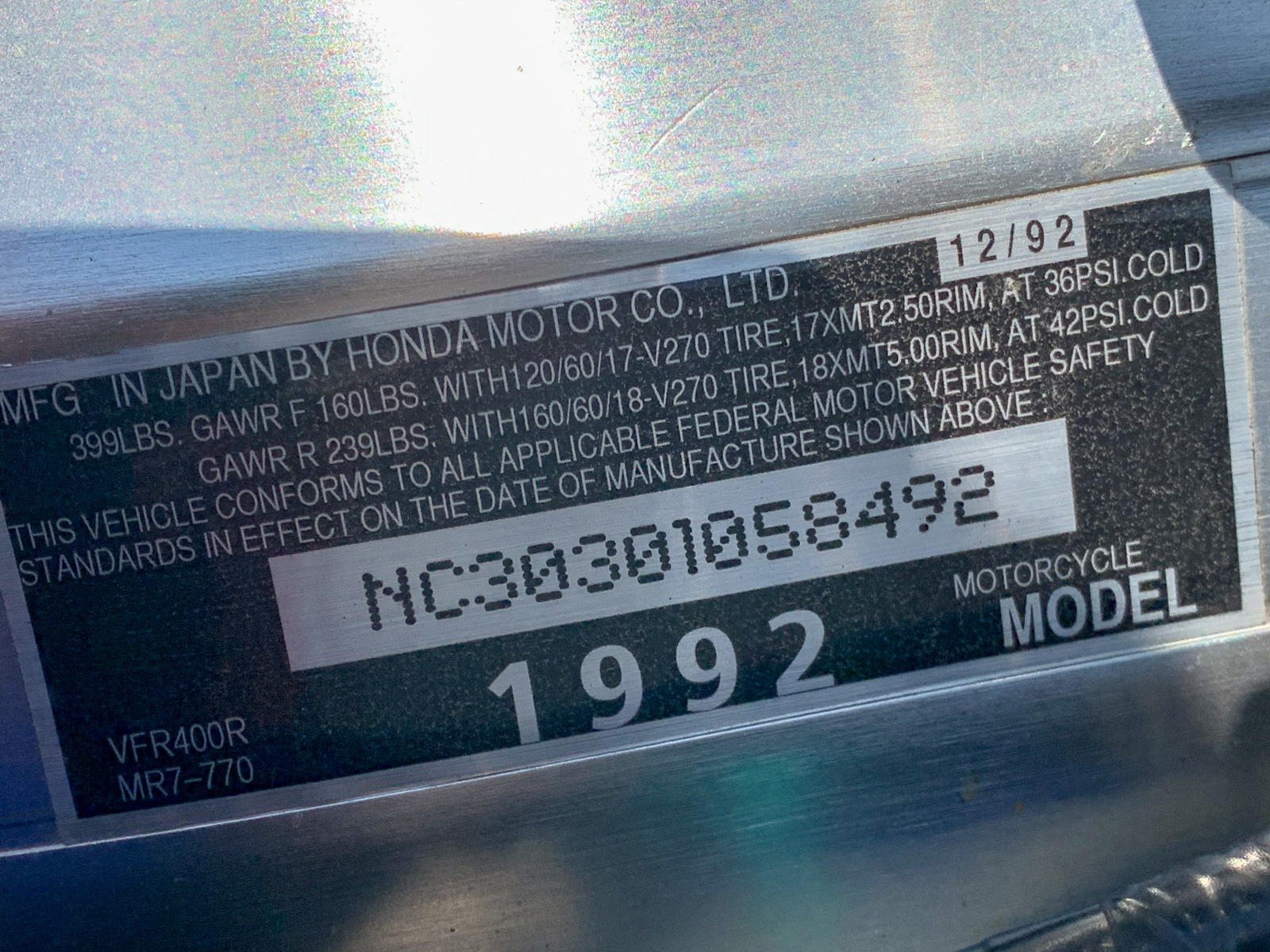 While the stock rims are white, the gold rims look pretty spot-on on this machine, too.

The previous owner of this machine had Jim Grainger perform some work, including a valve adjustment, and then had us perform a $2,493.24 service which included body work repairs (no paint), full carb service and syncing, full hydraulic flush, a coolant flush and the installation of upgraded, aftermarket aluminum radiators (upper and lower), new valve cover gasket, oil and filter change, new spark plugs, and fresh rubber. Click here for a copy of that invoice.

There are a handful of minor cosmetic imperfections (all viewable in the photo album), but if you’re actually looking to put some miles on a JDM 400, this is a great opportunity. It’s offered with a clean California title.

The current owner purchased it from us approximately 8 months ago, however he just snagged a wonderful RC30 from us and he needs to make some room so he just sold a KLR with us and now this bike has to go, too.

After he bought this bike, the seller then had us perform another service to the tune of $4,355 which included:
– stainless steel brake lines
– new front brake reservoir
– new chain/sprocket
– carb rejet
– new Bridgestone tires (about 750 miles on them now)
– lockable license plate stashbox
– some paint touchups
– new Tyga oval stainless full exhaust

Within the last month, the seller had us take care of a few more things for $954:
– chain slider
– clean and sync the carbs
– fix a wiring connection
– cut a NOS Honda key
– new front brake rotors

The sale includes the original header and exhaust, passenger pegs, and a Haynes VFR service manual.

With its RC30-inspired appearance, this VFR400R would make for a wonderful motorcycle to ride or to display.

A couple quick questions: 1. Carbs re-jetted 8 months ago when you added the full Tyga system but had to be cleaned/resynced last month? 2. Are the front fender mounts cracked? 3. Is that just brake dust/dirt on the wheel pics? 4. In the tach pic is that a paint chip where the white is showing on the blue paint? 5. Same pic, is that rash on the clutch cable fitting that has been touched up? 6. IS the original 2-up seat available with the bike as well? 7. If I place multiple bids am I charged % deposit fee… Read more »

I hope you don’t mind me speaking on behalf of the seller as I know the bike well and I happen to be standing by it as we speak. 1. The pilot jets on NC30’s and 35’s are incredibly small, just the slightest spec can clog one and CA gas is horrible. We strongly suggest ethanol free gas or at least, an additive 2. Sorry to say they are. The are brittle and can break easily. They are discontinued but more and more people are offering 3D printed parts so I suspect we could source those. 3. We put brand… Read more »

Thanks for the response Adam.

Last condition question, is that a scar/scuff on the left side of the swing-arm?

Is the bodywork OEM or aftermarket?