Additional photos of Ducati 996 SPS #1647 are available here for your perusal.

Designed to be the ultimate 996 at the time, the SPS (Sport Production Special) is an incredible combination of performance and beauty.

The limited edition SPS was an uprated version that featured a modified engine and chassis. Nearly all the specifications were improved such as the lighter 5-spoke wheels…

In 2000, Ducati upgraded the Showa forks to Ohlins units, as well.

Engine work included titanium connecting rods, upgraded cams, and a lightened crankshaft. The SPS also got a bigger generator and included a set of non-street-legal Termignoni pipes. All this was good for an additional 12 horsepower, and the modified chassis made the whole package that much sweeter. 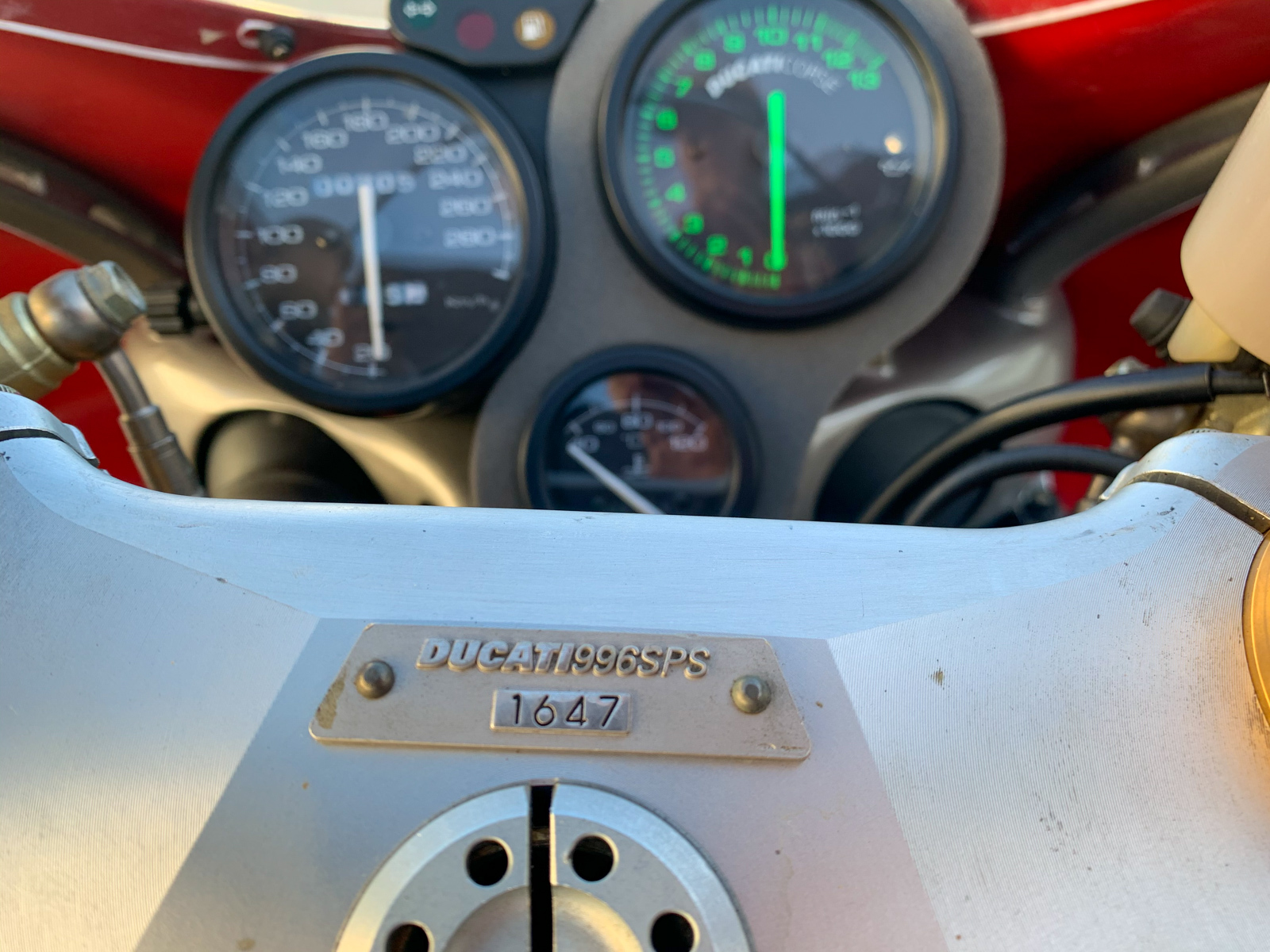 We were set to list it on 4/15 but we didn’t feel confident about the history so we opted to put it on the lift for some more research before posting it up. Our usual VIN check does not show anything this bike has never been titled. 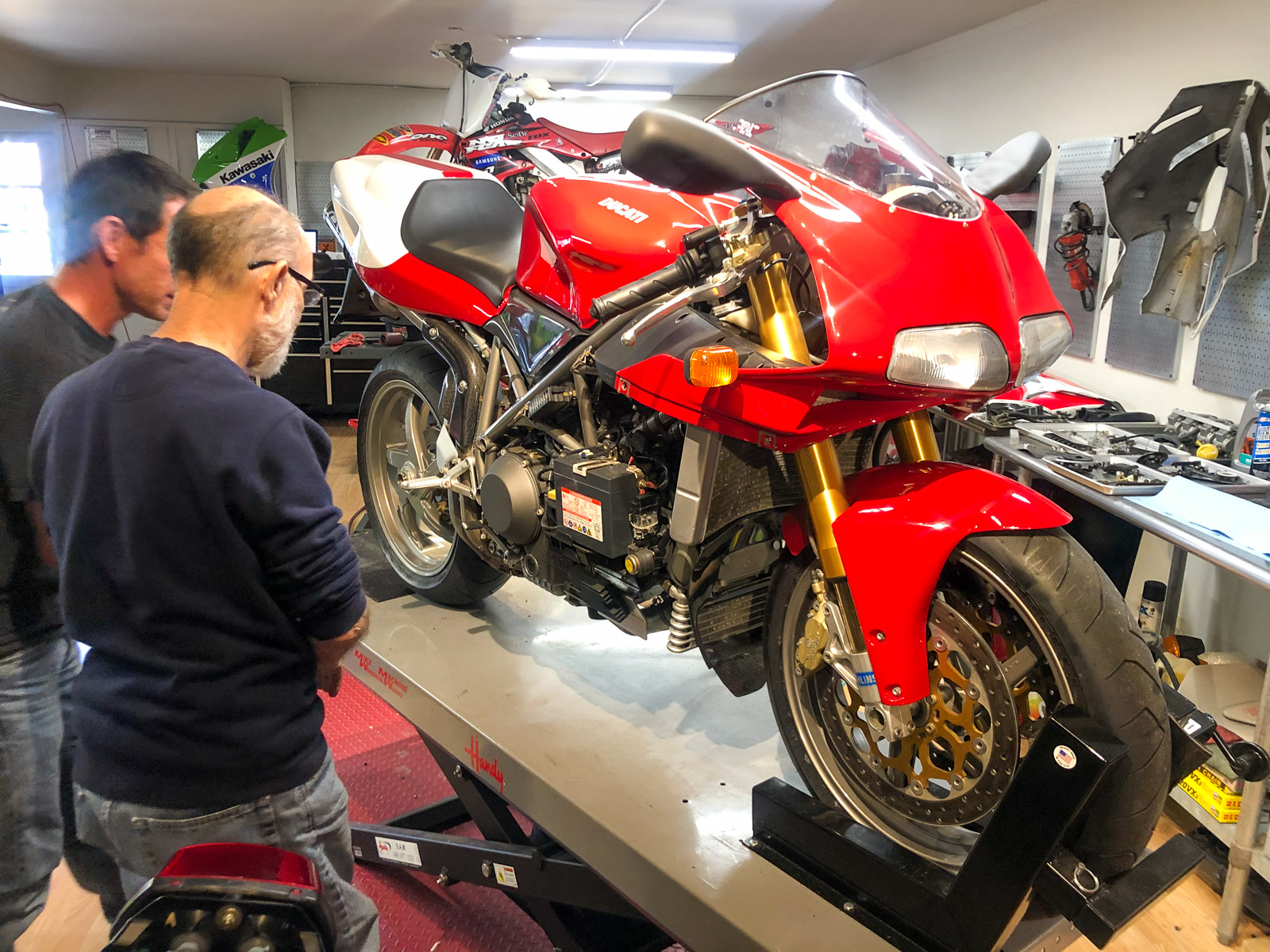 As per this sticker on the frame, this machine did not originally come with a title for road use. However, the seller is able to source a title if the new owner wishes and will cover the costs – expect that process to take 4-6 weeks and a fee would apply.

He sourced his collection from multiple sources and has no recollection of the “story” of this one. Pay VERY special attention to the photos. It’s questionable. The wheels show as new, the tires have 2002 dates on them, the bolts are a little corroded but you’ll note in the photos that we’ve had Ollie pulling them off and cleaning them up. The motor stayed dry and looks nice, as did the body, frame, swingarm, and wheels.

Why the corrosion? The collection was all put in new crates in a warehouse in Pennsylvania but they weren’t fully sealed so it’s highly likely they saw some humidity.

What throws us for a loop on the low mileage is the discoloring of the rotors, the fin bends in the radiator, the slight ding in the pipe, and some other small flaws we call out in the photo album.

Seeing how nice the overall condition is, perhaps it was used for some track days as that would beat on the radiator fins a bit.

Perhaps the owner ran aftermarket rear sets and that’s why these show so “near new”. That’s our guess but we’re not 100% so the reserve will reflect a lower-than-market amount. This SPS sure shows WELL and would take minimal money to make show quality…or you can take it as a sign that you should ride it!

We confirmed that this bike runs this morning but we don’t want to run her too long without a recommission service. Rare and beautiful, this SPS is ready to display. Expect recommission costs if you’re going to ride – we’ve already flushed the hydraulics but it will need tires, a battery, and possibly an injector clean. Also, the belts look to be in good shape but they should be changed due to age if you’re going to ride. As always, our White Glove service is available to make it a runner if the next owner desires.

How much can one expect to pay for:

Clearly tires are a must with this many years on em, we only charge $30 over cost but with labor that will add a bit. Fluids are already done so ideally just a little spray of oil in the cylinders to make sure nothing sticks, check the plugs, new battery, and of course a belt replacement. I’d say $1,500 all in including tires but perhaps less. Our title service is around 5-600 to get a title but just super slow right now as many DMV’s are on limited schedules so it can take 2 months or so 🙁

Does this model (996SPS) benefit from the single injector mod? If so, has it been performed and is the ECU congruent with this mod.

Very aware this is a common thread and idea passed around on forums. The premise of unplugging one injector and changing the chip. You’ll likely see some say it was a great mod where as others will say the contrary. I personally can’t vouch for either tact mate. This bike is pretty OEM and doesn’t appear to be modded much so I’m going to assume it wasn’t messed with but the owner isn’t sure as it’s just how he first bought it and that was quite some time ago. Wish I could be of more help