Additional photos of this Ducati 996R are available here for your perusal.

1990 marked the beginning of Ducati’s supremacy in the World Superbike Championship, with the Bologna firm taking home the title in ’90, ’91, ’92, ’94, ’95, ’96, ’98, and ’99. Ducati’s superbikes from this era cemented the brand’s reputation as a purveyor of world-class race machinery with a series of ever-evolving models. But in 2000, with Colin Edwards at the helm, (Castrol) Honda managed to unseat the Italian manufacturer. 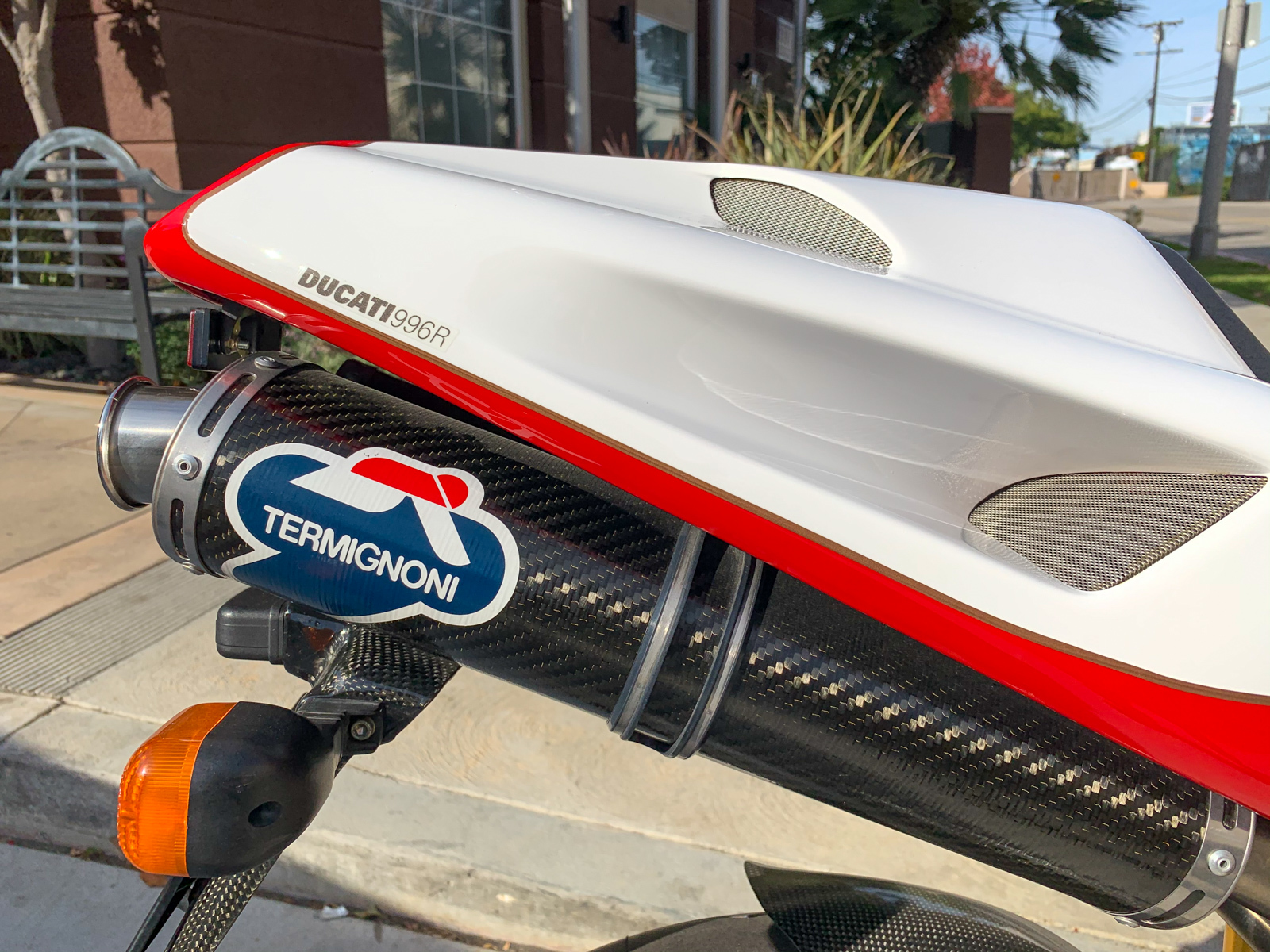 In a bid to regain their stranglehold on the series, Ducati went back to the drawing board to design a new and improved iteration of the 996. To help improve the Bordi-designed engine, Ducati brought on Angiolino Marchetti, an ex-Ferrari engineer who helped design the V-12 Formula One desmo engine prototype in the late ‘80s. Marchetti came through for the company, ultimately designing the firm’s first Testastretta (narrow) head, which allowed bore to be increased by 2mm to 100mm while the stroke was shortened to 63.5mm, yielding more power.

The result was a liquid-cooled, 998cc, four-stroke, 8V, DOHC, 90-degree desmo L-Twin with titanium rods and specially-designed cams, Weber Marelli injection, six-speed transmission with a hydraulically-activated dry clutch, and sand-cast crankcases just like on the factory race bikes. The 998cc Testastretta motor generated 135 hp at 10,200 rpm and 77.5 ft-lbs of torque at 8,000 rpm. With a dry weight just north of 400 lbs, those figures translated to a top speed of approximately 175 mph, and a standing quarter-mile time of 10.1 seconds.

With its eyes on recapturing the WSBK crown, Ducati released a new homologation special version of its flagship superbike, known as the 996R. In order to campaign the Testastretta-engined model in the World Superbike Championship, Ducati was required to turn out 500 units of the up-specced two-wheeler. Ducati made 350 of the specimens available to private customers at a price of 26,000 euros, while the remaining 150 units were earmarked for “special allocation” – niche markets, privateers, and factory-backed race efforts. Despite the significant MSRP, every example was spoken for within six hours of its release.

The successor to the 996SPS, the 996R was only produced for a single year: 2001. The R-spec differed from the base model in a number of key areas. The 996R featured 43mm inverted TiN-treated Ohlins forks and a mono-shock, both adjustable for compression and rebound damping. Ohlins also supplied an adjustable steering damper. 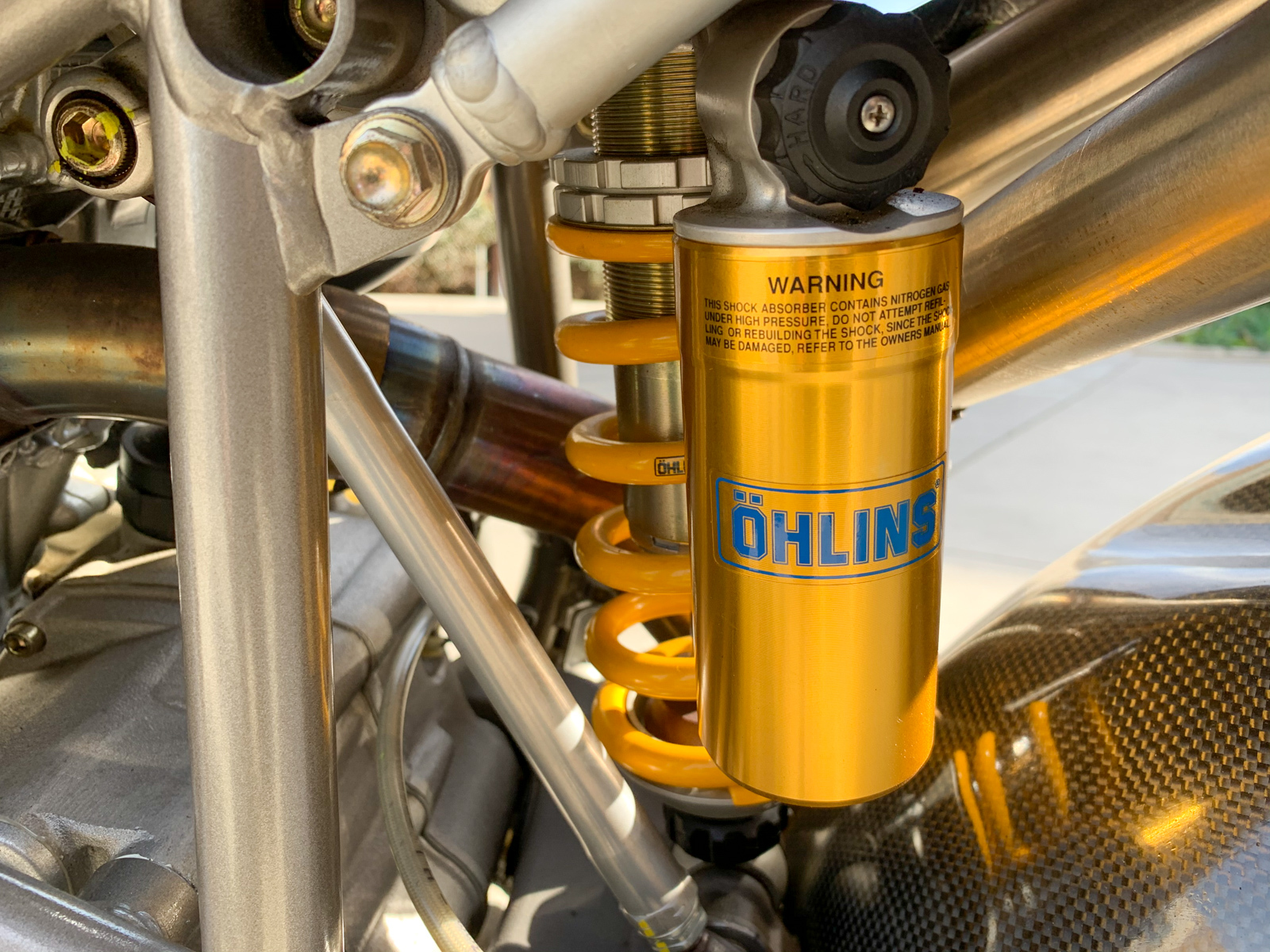 Stopping duties went to Brembo hardware; dual 320mm discs clamped down on by quad-piston calipers, supplemented by a single 220mm disc bit by a dual-piston caliper in back.

The 17-inch five-arm lightweight alloy wheels came courtesy of Marchesini, and were the exact units used on Ducati’s WSBK racers.

Other changes found on the upgraded model consisted of a lightweight race battery, thicker 12mm engine mounts and thicker frame tubes for overall increased rigidity, and a dual-can GP-style under-seat carbon fiber muffler setup from Termignoni as standard. The base model’s injection-molded plastics were also replaced by full carbon fiber bodywork throughout, including unpainted carbon fenders.

All of Ducati’s efforts quickly paid off, and in the 996R’s inaugural season in 2001, Troy Bayliss would pilot the R-spec to a WSBK Championship title. The 996R was the closest thing to a genuine factory Ducati racer that money could buy. Brimming with race-grade componentry and adorned in Massimo Tamburini’s legendary bodywork design (in carbon fiber!), the 996R is a prime example of the type of machine that gave Ducati its reputation for exotic and exclusive race-bred machinery.

This 996R is offered by the second owner – he acquired it on June 7th, 2019 from a seller in Miami, Florida. It is not currently registered and the odometer shows just 225 miles.

6 months ago, this Ducati was given a ~$3,900 service by Chris Boy at Moto Corse Performance in Fort Lauderdale, Florida. Interested bidders may request a digital copy of the invoice, which shows that this bike has fresh belts, plugs, battery, tires, oil, coolant, filters, lines, and more.

The owner has misplaced the title but we have a photocopy of the front so a replacement has been ordered. A Bill of Sale will be issued at the conclusion of the auction, however a title is forthcoming – expect that it may take up to two months for you to receive it. 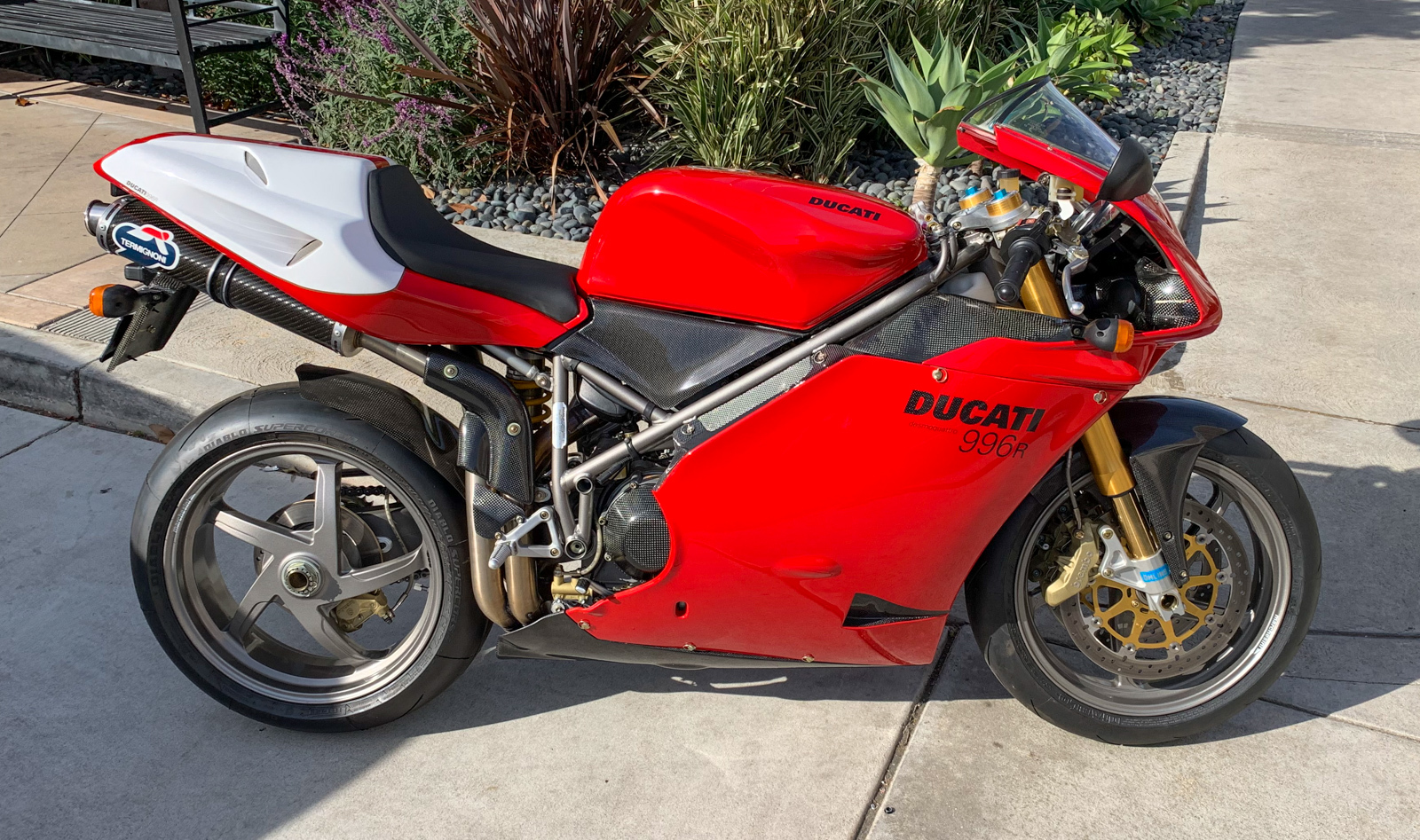