In 1952, FB Mondial started producing racers for privateers with the release of the 125 Monoalbero. Over the next half-decade, Mondial continued to prosper, selling a lot of bikes and winning a lot of races. Though its product line had expanded a great deal, Mondial was still making utilitarian three-wheelers, until the demand for its high-performance bikes reached a point where it pulled the plug on the trikes in favor of building more two-wheelers.

Despite having a wonderfully successful year in 1957, Mondial announced the following year it would end its factory race program. Though the factory-backed effort had ended, many privateers continued to campaign Mondials, as they were still very competent and competitive machines. So much so in fact, that Soichiro Honda reached out to Boselli, asking if he could buy one of FB’s old DOHC 125cc GP racers in an effort to kickstart Honda’s own race program. The Count obliged and sold Honda a 1956 Bialbero. The Bialbero was crated up and shipped to Japan, where Honda’s crack team began reverse-engineering the four-stroke single. Honda proceeded to develop a series of engines based on the Mondial mill under the direction of Kiyoshi Kawashima, leading to the bevel-driven DOHC parallel twin-powered Honda RC141, and then the RC142. By 1959, Honda was competing at the TT, and the rest is history. 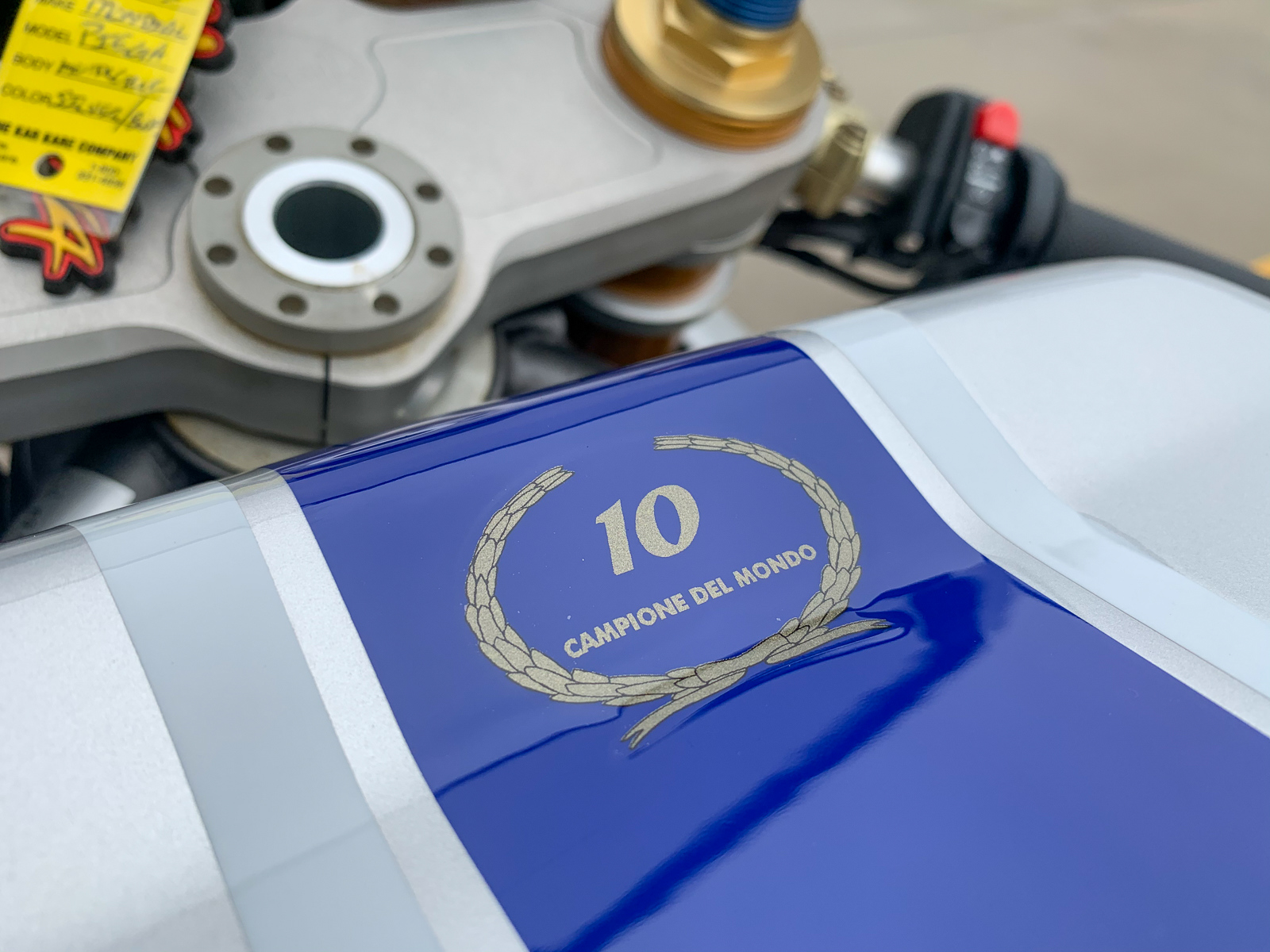 Today, Big Red still has a 1956 Mondial 125 on display at the Honda Collection Hall in Motegi, representing the pivotal role the now-defunct boutique Italian marque played in the history of the history of the Japanese powerhouse. Management and personnel came and went at Honda over the years, though the company never forgot about the help its race department received from Mondial. By the dawn of the 1960s, Mondial stopped producing engines, though they continued producing motorcycles with other engines stuffed into their frames. In ’79 the company attempted to ramp production back up, but things didn’t really pan out. Another attempt was made to revive the name in the late 1980s, though ultimately to no avail. Just before the turn of the millennium, Pierluigi Boinini Boselli, son of Count Giuseppe Boselli, was approached by one Roberto Ziletti, who headed up the Lastra Group (a massive printing plate manufacturer) with the idea for once again reviving FB Mondial, this time with a cutting-edge sport bike that would compete in the World Superbike Championship. Boselli signed on, and the two began work on a new machine.

The operation was well-funded, however developing a new engine from scratch was still out of the question. Boselli and Ziletti eventually landed on using a liter-sized V-Twin, as that particular configuration had been dominating in WSBK around this time. The two worked out an informal deal with Suzuki for the Japanese brand to provide 250 of its 996cc TL1000 engines, which was the number of machines the new Mondial planned on initially building. Ex-Aprilia engineer Nicolo Bragagnolo was brought on to design the new model, while Sandro Mor was tasked with penning the bodywork. The project began with the development of a new chassis. The V-Twin would be wrapped in a tubular chrome-moly vanadium structure comprised of a pair of spars made of two beams joined via trellis-style cross-sections. The unique shape allowed the chassis to utilize thinner framework to deliver a lightweight yet rigid unit. TIG-welded entirely by hand, the trick frame was complimented by a carbon-fiber subframe that was integrated into the (also carbon fiber) tail section, and a trellis swing-arm wrapped and reinforced in carbon fiber.

Mondial also worked with several companies to co-develop the running gear on the new model — which was dubbed the “Piega”, Italian for “bend” or “fold”, a name that Ziletti’s then four-year-old son came up with. Mondial marketed the new model under the slogan; “la corsa della vostra vita” (Italian for “the race of your life”).

The lighting on the Mondial was also of the top-shelf variety. Out front there was a pair of stacked projector beam LED headlights laid in a carbon fiber housing. The front turn signals are LED units tucked into the back of the mirrors.

This Piega (VIN: ZA9SP102PG7100074) was acquired by the seller on September 14th, 2005 from a dealership in Denmark called Jento (no longer in business). The odometer shows just 1 kilometer.

The sale includes an invoice from purchase, two keys, and a cover. It is offered on a Bill of Sale.

The only cosmetic flaw we can see is a small group of scratches on the right side of the tank. [12-28-19 UPDATE]: Thanks to EvoluzioneCorse for pointing out some additional issues that can be noted in the photo album – the rear left turn signal is bent and there’s a scratch on the rear wheel.

We love the Piega and its combination of Japanese drivetrain + Italian styling. Just finding a Piega by itself is hard enough, but this one stands out with the lowest mileage (or should we say kilometerage) that we’ve seen.

Iconic, the following are either imperfections or something is wrong; please clarify?
1) Rear left-side turn signal as shown in pictures 8, 28, 29, 31 and 32… why is it bent?
2) Upper right-side fairing bolt/washer is visible in picture 33, whereas it is missing in pictures 24 and 27… why?
3) Rear wheel – is that a scratch or crack located in the inside of the upper right-side spoke… picture 7?
4) Rider Seat – right-side and picture 5, what are the ripples or waves on the bottom of the seat?

EvoluzioneCorse – thanks for the questions! 1.) We do not know why it is bent, our best guess at this point is that someone bumped into it. 2.) This was our fault – the bolt was removed to take the fairing off so we could hook up a battery box to take a photo of the mileage. It has been re-installed. 3.) We missed this, thanks for pointing it out. It is a scratch, not a crack. 4.) This is hard to tell – when one of our techs investigated it just now, he said that you can feel something… Read more »