Additional photos of this Norton Commando 750 are available here for your perusal.

Introduced at the 1967 Earls Court show, the Commando was an instant classic – Motor Cycle News named it Motorcycle of the Year in 1968…and the next four years in a row as well.

1971 was the last year of production before the infamous Combat motor debuted, and the 746cc parallel-twin motor produced 58 horsepower.

The seller acquired it six months ago from a private party who had to move out of the state. “He had owned and cherished the bike for 25 years with a full frame-off restoration and enjoyed the bike locally. It is well-known within the SoCal Norton Community.”

During the last six months, the seller has covered approximately 1,000 miles. The odometer now shows 36,847 miles.

The seller is letting it go as “I have three other bikes, all BMWs, each more well-suited to my chosen riding type which is exploring, adventure, and travel. I bought this Norton as a bit of nostalgia on a whim, and I’m glad I did. I thoroughly enjoy it, but it’s not going to get ridden much and will just take up garage space. It belongs with somebody who will enjoy it and ride and tinker in equal amounts and that’s not me yet.” 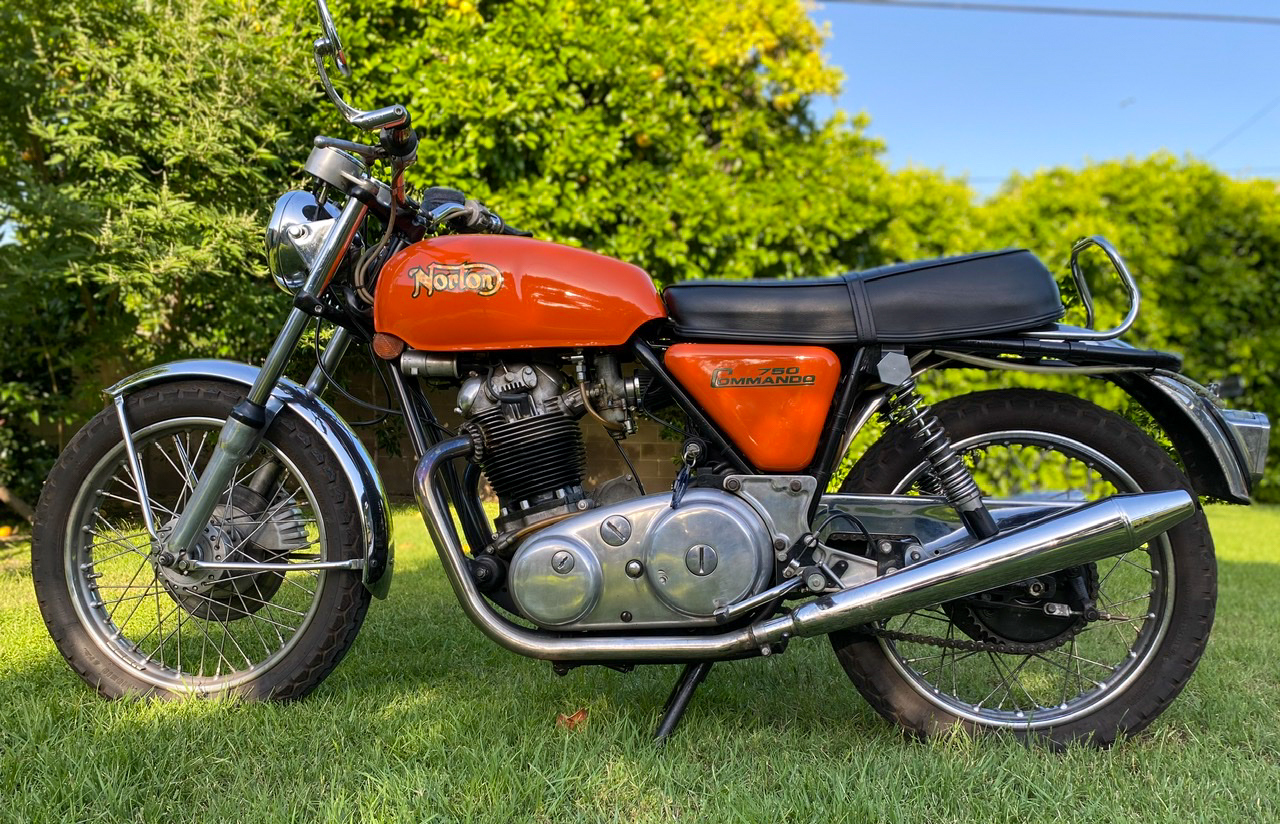 During his ownership, the seller cleaned and re-jetted the carbs: “I raised the needle (dropped the clip one notch) for the hot summer months to richen it up, so right now I’d recommend raising the clip to drop the needle to lean it out just a bit so it’s a little more crisp.” 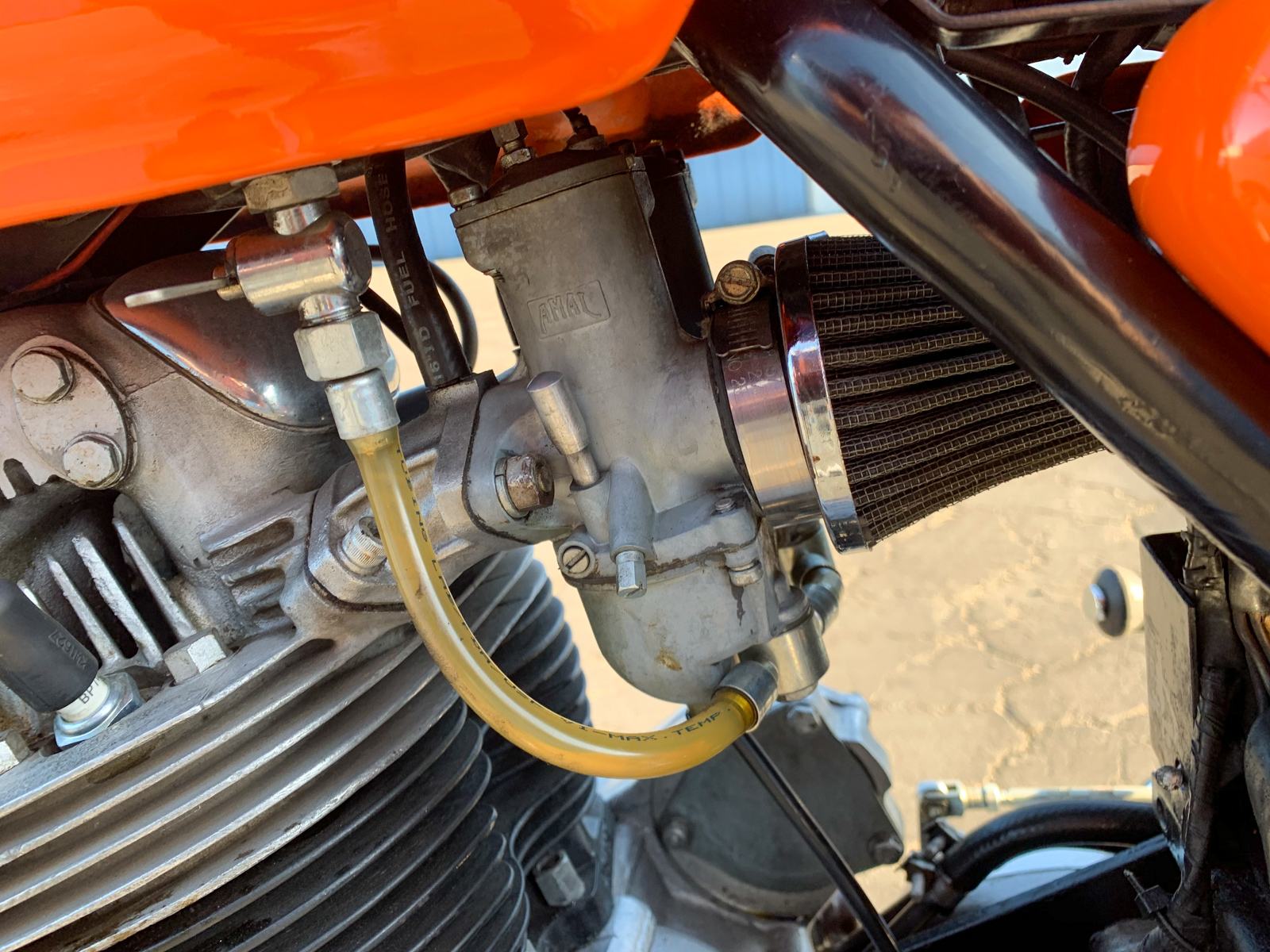 The custom orange and gold leaf paint was done in North Hollywood, California. 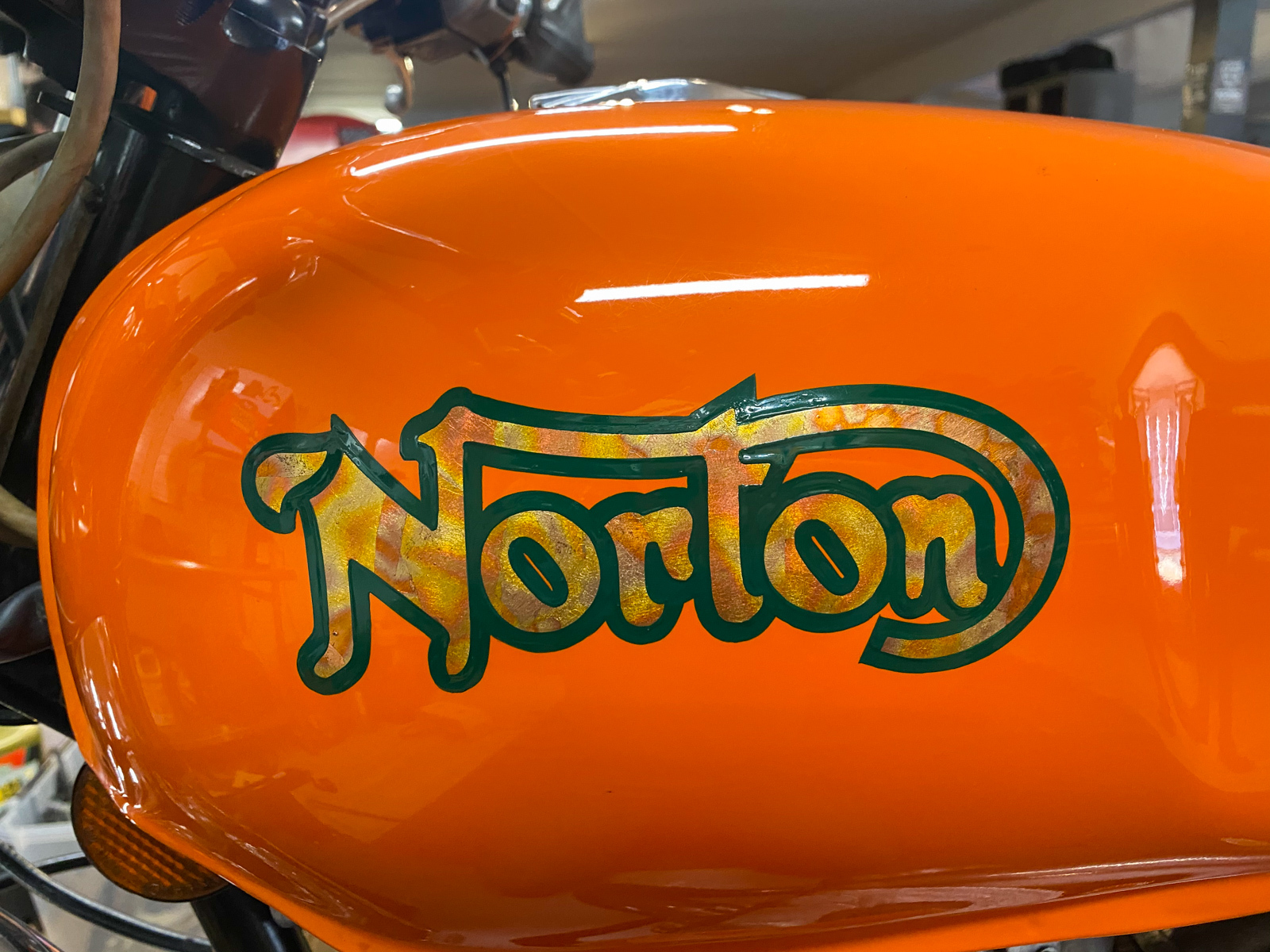 The stock ’71 Commando had a 8″ twin leading shoe drum front brake, however this example has a disc brake conversion.

In addition, it has a tombstone taillight.

The sale includes some spare parts and a series of receipts from Chatten Cycle for plenty of restoration work.

There are also some historical photos.

Cosmetically, the seller says that it “could use a serious detailing, but nothing that can’t be resolved without time and elbow grease.”

Mechanically, the seller states that this is “an absolute strong runner,” noting that it could use an oil change, some tightening of the wheel spokes, and new spark plugs. He highly recommends utilizing the same NGK spark plugs as this Commando is “sensitive to plugs.”

Currently located at our facility in Santa Monica, California (please make an appointment if you’d like to inspect it), this Commando is offered on a clean California title with registration current through May 2021.

Have any Commando stories or questions about this listing? Let us know in the comments below!

Does this Commando have the original dual points setup or has it been converted to electronic igntion, such as Trispark, Pazon, or Boyer? It’s kind of hard to see the receipts, they look to date from 1997…is there a way to list what was done for the rebuild? Was everything built back to stock specs, or were some common upgrades put in place, mechanical of electrical that aren’t mentioned here? How is the battery and how often is the bike run? Would you consider it ready to ride in good shape up to Sacramento? Thanks.

RichieBlue, this is my bike so I thought I’d respond directly and for everybody’s benefit. It has the original points setup which have never been an issue for me or the previous owner (of 20-plus years). Everything on this bike has always been kept well within spec and has never had issues. Battery is good, kept on a good charger that peak/drop/peak instead of average “trickle” charger. I rode the bike at least every other weekend from Burbank out to the Rock Store and Malibu and into the city, or up the ‘Crest to Newcombs, never any issues, always a… Read more »

Thanks very much for the reply, I was just looking to get a wider report of it’s conditon. I bought my first Commando new in 74 in upstate NY and rode the NE and Canada while learning to wrench on it. I had to maintain those dual points, and the rest til 79…hit by car. Later after moving to CA in 92 I bought a 75 Commando which I still have and is now at Fair Spares being rebuilt after a trailer fire. What I ride now is a 75 cNw modified Commando, so I’m at least familiar with them.… Read more »

I’m not sure if the master has had anything done to it. I was told that AP has some pads which work far better than whatever is in it now but as far as mechanical alterations I simply don’t know. And 49 is my magic highway, has been for many years since practically growing up at the BMW 49’er Rally in Mariposa for many years!

Thanks again for the reply…I’ll see how the wallet holds. 🙂

Sorry, could not find more cash for today, it would have had a good home. Best wishes on a successful sale. Rich