Additional photos of this 1972 Suzuki GT750 are available here for your perusal.

With its dry weight of 507 lbs, the bike could reach about 110mph. It had a double-sided, twin-leading shoe, 200 mm drum front brake with 180 mm drum rear. The Exhaust Coupler Tube System (ECTS) that connected the left and right side exhausts together was designed to boost low-end torque. Carburetors were 32 mm Mikunis and power output was 67 bhp at 6,500 rpm. The two-stroke engine had a strong flat torque curve producing useful drive from as little as 2000 rpm and provided a more sophisticated ride than its peakier H2 rival. Also included was Suzuki’s SRIS (Suzuki Recycle Injection System), a method minimizing smoke by burning oil/gas lying in the bottom of the crank chambers – a first for any two-stroke from any manufacturer.

The cylinder block was alloy with cast iron liners. It had a five-speed gearbox and three into four exhaust. The ride was most impressive when the GT was used in a touring function, being able to cruise at high speed in relative comfort. Enthusiasts yearly gather at events to show off their pride and joy, and also to celebrate Suzuki’s first big 750cc success, this bike was the beginning of Suzuki’s love affair with the 750 class. 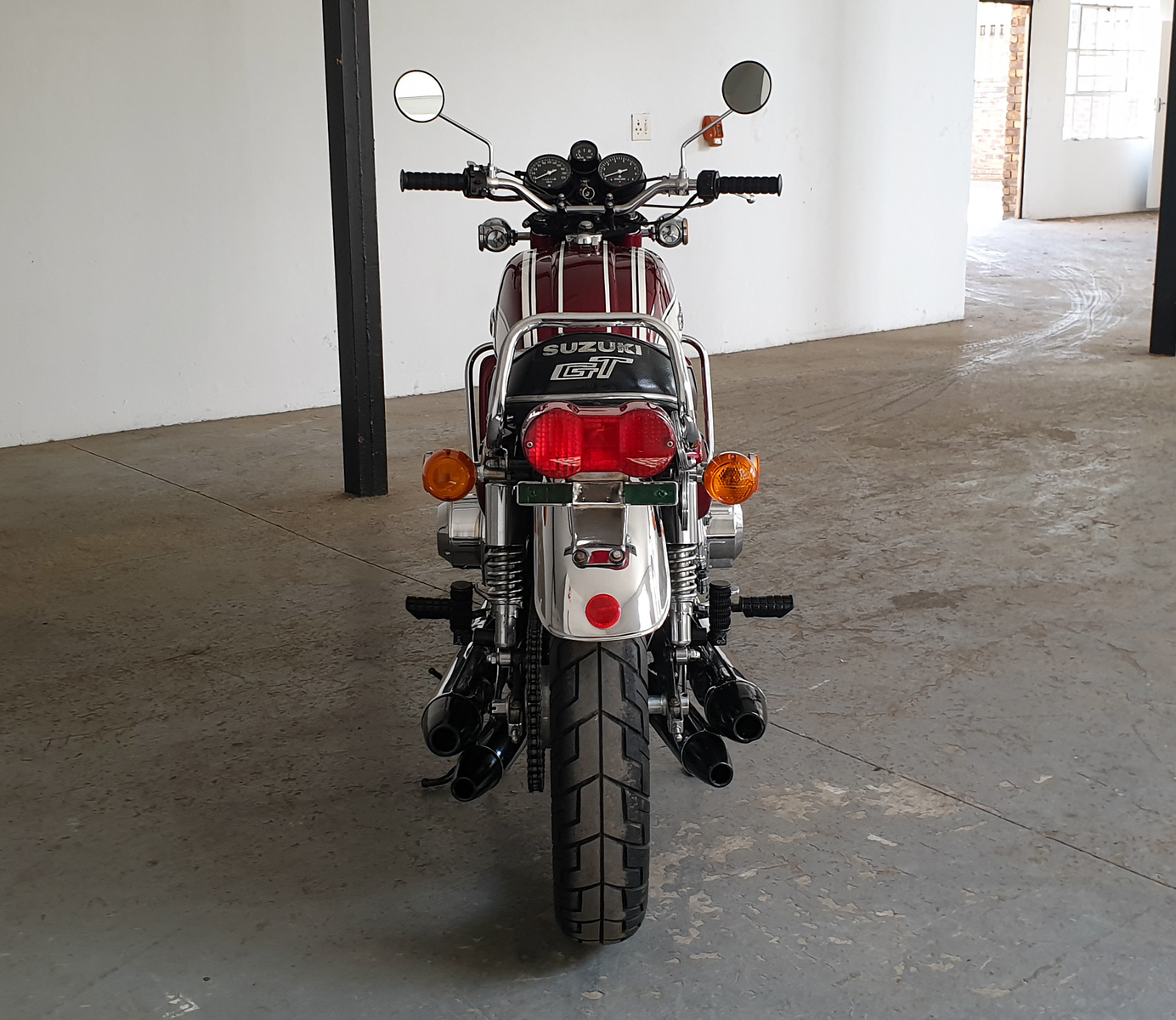 First year models stand out due to the front drum brake and painted radiator side covers – both of which are rare as those features would be modified in 1973.

The seller of this example (VIN: GT750-18464, Engine #: GT750-18495) acquired it five years ago from a fellow collector. During that time it’s only ridden it twice – once “for a few kilometers around the block by my brother” and again recently to verify that it would run before listing it here on Iconic (video above).

The seller states that this Suzuki “presents as an immaculate bike for its age and could easily stand on show with no problem. Albeit said it is a great display bike, when I took it out and fueled it up, the bike started up with relative ease.”

“This bike has resided in collections most of its life. It has seldom seen the sun and it is incredibly original.”

“The bike has its original exhausts, it has a tool kit. I can’t think off hand anything that is fitted to the bike that’s not original, even down to the original handle grips.”

The seller states that there are no mechanical issues, and sums it up by saying it is “a great example that can be ridden or stored as a show piece.”

Got any “Water Buffalo” stories or questions about this listing? Let us know in the comments below!