Additional photos of this Kawasaki H1 Mach III are available here for your perusal.

Kawasaki’s Aircraft Company began the development of a motorcycle engine in 1949. The development was completed in 1952 and mass production started in 1953. The engine was an air-cooled, 148 cc, OHV, four-stroke single cylinder with a maximum power of 3.9 hp at 4,000 rpm. In 1954, the first complete Kawasaki Motorcycle was produced under the name of Meihatsu, a subsidiary of Kawasaki Aircraft. In 1960, Kawasaki completed construction of a factory dedicated exclusively to motorcycle production.

By the mid-1960s, the US had become the largest motorcycle market. American riders were demanding bikes with more horsepower and higher maximum speeds. Kawasaki already had the largest-displacement Japanese machine with their 650 cc four-stroke W series, but it did not fit the niche Kawasaki was aiming for. Honda had introduced its Honda CB450 in 1965 and in 1969, the Suzuki T500 Titan/Cobra appeared. Also in development was the Yamaha XS 650. Already familiar with the Honda CB450, Kawasaki development began work on the top secret N100 Plan in 1967.

The goal was to produce a motorcycle with 500 cc displacement that was able to develop 60 hp and have 13-second quarter-mile times, then considered over the achievable limit for a road bike. When announced in 1969, the H1 was factory quoted in the UK motorcycling press as “the fastest and best accelerating road machine ever produced, being capable of 124 mph and 12.4 sec. for the standing start quarter mile“. 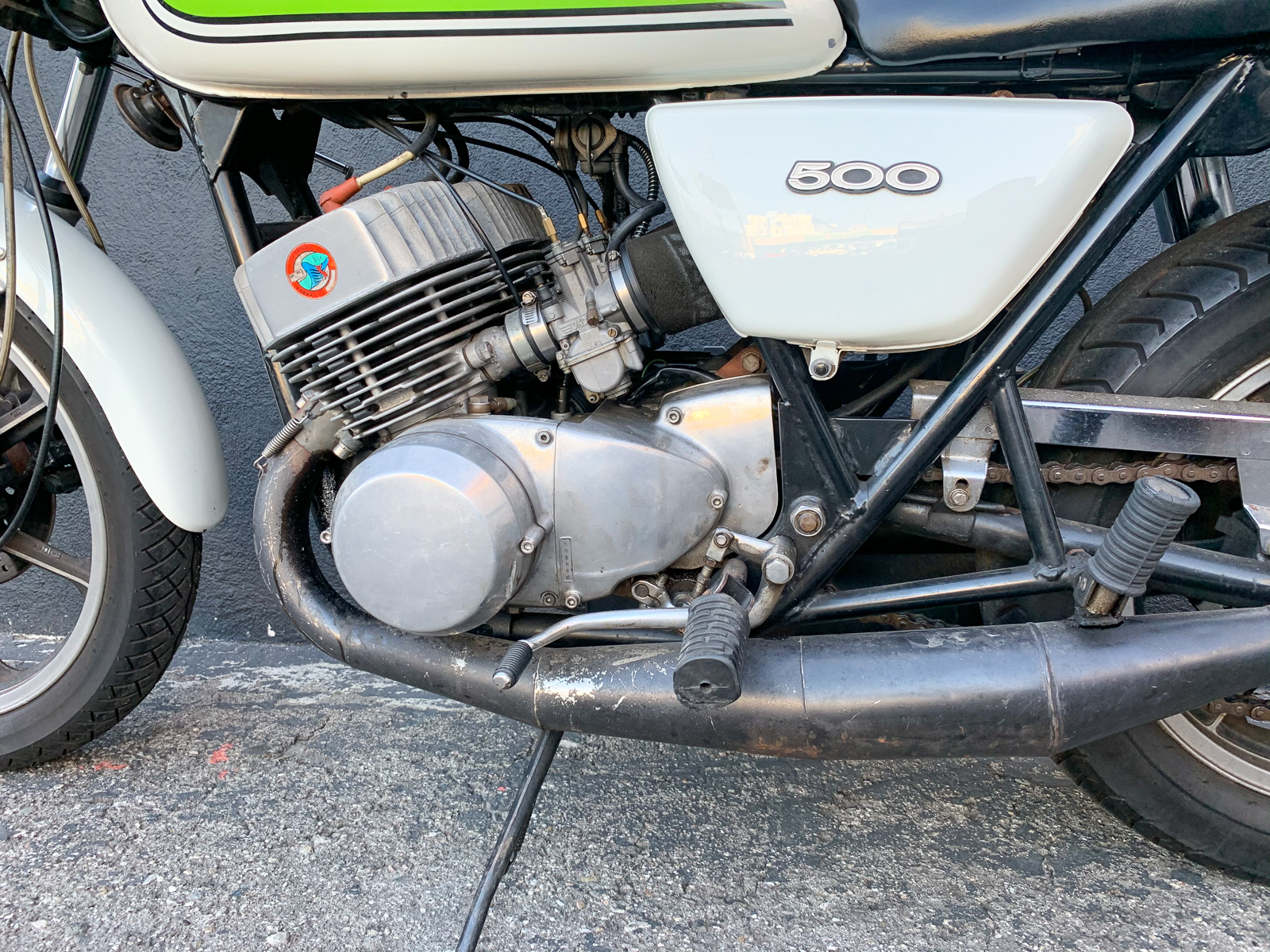 This well-preserved 1974 triple has a piston-ported two-stroke engine in a steel-tube cradle frame weighing in at 414lbs wet. The engine is an air-cooled 60hp three-cylinder with a displacement of 499cc, generating 42lbs torque. It also has Mikuni VM 28 mm carburetors, and thyristor-based capacitor discharge. The transmission is a chain driven 5-speed manual. The suspension setup is an Inner spring telescopic front fork, three-position spring preloaded adjustable shock absorber and swing arm on the rear. Front brakes were 296mm disc, with 180mm drum on the rear. In the US, the Mach III proved to be very popular. Motorcyclist magazine said the Mach’s power-to-weight ratio was the “best ever produced in a motorcycle meant to sell to anyone who has the money to purchase it.” 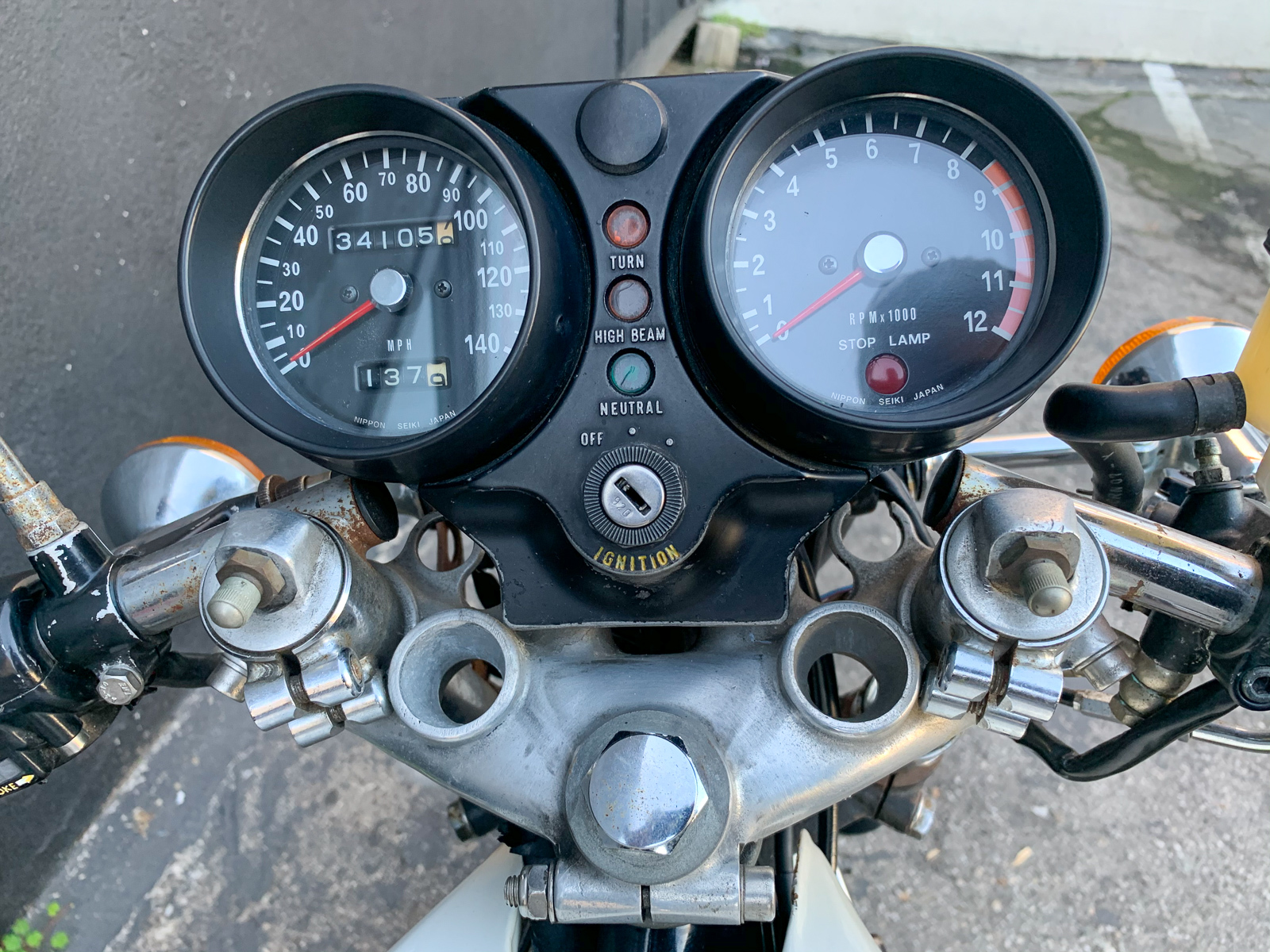 From a chassis standpoint, this H1 has borrowed from another Kawasaki with the wheels, brakes, and suspension from a KZ1000 LTD.

The engine has also been upgraded with Denco expansion chambers, an OKO carb, and a Denco Cobra Kit – though we are unable to verify if it is a 90hp or 80hp street kit. The engine was rebuilt by Yoshi from Garage Company in 2016.

The seller acquired this bike in 2012 from Michael Woolaway (you may know him as “Woolie” from Deus Ex Machina), and he’s put approximately 3,000 miles on this Kawi since. 1,000 of those miles came after the engine rebuild in 2016. Regular maintenance has been handled by Metrik Moto in Culver City, California. The seller is letting this bike go as he’s moving to Europe.

Currently plated in California, this Kawasaki H1 offers up an interesting opportunity for a classic machine with some extra oomph.