Additional photos of this Yamaha SR500 race bike are available here for your perusal.

The seller of this bike has provided a wonderful history that we are sharing below:

“This document is based on my history with the bike, conversations with some of those who knew David Goldstein and who helped him build and maintain the bike. I also have an extensive photo album that came with the bike that chronicles the development of it over the years. Some dates may not be perfectly accurate as I depended on the photo sequence, dates on photos and interviews. If this history includes areas where I have speculated or don’t have backup I have so indicated.

We purchased the bike at Mid-Ohio’s Vintage Days from Rob Iannucci in 2007. Rob is a Brooklyn attorney who owns Team Obsolete. Rob was a friend of David Goldstein’s and was selling David’s three bikes for his girlfriend. David was a New Jersey furniture broker. He died of cancer in 2006 in New Jersey.

Friends took delivery at the Mid-Ohio vintage races and we picked up the load of parts from Rob’s shop later that year. I believe I have the hand-written document from Rob transferring the bike to us. We are the second owners.

David (along with friends) developed the bike as described below. The bike’s basis was a 1976 Yamaha SR500. I was told David actually had three SR’s – this one, which he bought new, a second bike that he purchased and the third was purchased from a female student from Germany. I have a large batch of parts that came with the bike and some, like instrument clusters, swing arms, etc. support the three bike thought. We have the original title, however it is non-transferable as it was not signed by David prior to his death.

Photos show David racing at Roebling Road, Daytona, Talledega, and Road America. Stickers on the fairings indicate he raced both AMA and AHRMA. We assume David raced the bike from the late 1970’s through the late 1990’s. The original yellow number plates may mean he raced in “vintage super bike” as lights were required. I tried, unsuccessfully, to find records through AHRMA of race entries or finishes. We raced several times in AHRMA with Brad Phillips as the rider from 2008 through 2012.

It was ridden as a street bike, but early photos show it with number plates [71] and an exhaust megaphone. [Note: the early pictures show a rear disc brake. I bought a new SR500 in 1989 and believed that was the first year with rear discs].

Soon thereafter it was converted to wire wheels and a drum rear brake. The front disc was changed from a factory disc to what I was told was an AP disc and caliper from Freddie Spencer’s Honda super bike. Much of the fabrication on this bike: rear sets, front fender and brace, tank, oil catch tank, adaptation of the forks, fairing brackets, was done by the late Todd Schuster. Todd worked for Butler and Smith-early importers of BMW motorcycles-on Reg Pridmore’s BMW championship winning super bike in 1976 and was connected with Freddie Spencer’s team. The rear shocks appear to have been upgraded around the same time. The yellow rear stand shown in some photos has fallen by the wayside as we received a different one with the purchase.

The exhaust was switched to a Supertrapp on what appears to be a stock header, The seat was switched to a Matchless and an aluminum tank [formerly from a BSA, purchased by David at a flea market for $25 and reconfigured by Schuster] was fitted, although the bike had a headlight and taillight. I speculate those may have been required for the class David was in at the time. Shocks appear to have been changed again. Race number was changed to 227. It is not clear when the engine displacement was increased to 596 cc’s.

A front fairing and clip-ons were next. I can’t tell accurately when the Ceriani endurance forks were installed as some pictures appear to be out of sequence. Best guess is 1997. David had owned them for about ten years. Folklore has it that they were stolen by a reputed drug addict and sold to David. The second version is that someone David knew imported 10 sets of the forks and could not sell them, making David a good deal. The panels on the tank were painted and one photo appears to show the dent on the lower right side.

Taillight was removed and replaced by an aluminum plate [still on the bike but powder coated black]. White Brothers aluminum boxed swing arm installed. Todd build a new front fender modeled after one David had seen on Freddie’s Honda super bike and incorporated a fork brace. A new exhaust was built (probably using the old Supertrapp) that runs through the belly pan and it is still on the bike. I believe the pan was fabricated by Todd and/or Bill Anthony, as he is shown in one picture with Todd.

David purchased two “long course” fairings from AirTech apparently through Rob Iannucci. Those are part of the sale, have original decals and hand painted signs.

I contacted FS Speer Yamaha about the bike as it is shown on at least one set of the fairings and received some photos from their files. I believe the AMOL on the oil tank refers to a BMW dealer.

Arman Armirian did much of the engine work. He found a way to reinforce the cases to prevent cracking and studs from pulling out. Arman did some development work on a two spark plug head, that, after consulting with others, I decided not to buy. Rob Iannucci has/had the prototype head.

I have pictures provided to me of the spares I obtained. They are poor quality but I would attempt to scan and send them to potential buyers. I can also take photos of specific parts or groups of parts in that would be helpful.

Since we have owned the bike some modest changes have been made:
We had some clean up done on the frame, brackets, etc., installed a “neater” air cleaner, redesigned some hoses, changed the tach, [original Scitsu tack is on the bike but probably needs a factory rebuild] added an improved kill-switch, relocated the pins for the rear stand, and powder coated a few parts.

It had a set of starter rollers that we used when the bike raced. If I can find them they are part of the package, however, if I were to continue to race the bike, I’d adapt it to a MotoGP-type electric starter.

The engine was refreshed in 2019 by Barry Crowe of Trophy Moto in Greenville, SC. The bike was tested for a few laps by Brad Phillips who had been the rider for the few races we ran. It was dynoed at 46 HP on 91 octane pump gas. The tires were replaced with Continental Attacks at that time.”

The seller also provides a partial list of the spares that go with the bike. “Most came from the Goldstein purchase but some are mine. I make no representations on the conditions of the spares. There is no warranty on the bike or any parts listed below, you are buying as-is.” Please Note: as a reminder, buyers are always responsible for shipping costs of spare parts on Iconic Motorbike Auctions.

Racing Parts:
Three complete race engines [one in the bike]
One “roller frame” [wheels and front forks and swing arm included-one engine installed]
One frame – no suspension
One XR500 frame – no suspension – sub frame chopped off, but have a sub frame
Stock gas tank, with key. One dented stock tank – primed, possibly have key for it
Four stock swing arms
Set of front forks
Two sets of engine cases
Three wire wheels and three Yamaha aluminum wheels [two on roller bike]
One cylinder barrel and piston
Two [or more] sets of clip on handlebars
Five carburetors
Several sprockets, both front and rear
Several dies and templates for parts making
box of valve train parts
box of transmission parts
Several oil filters and boxes of spark plugs
Starting rollers – if I can locate them!

Please note: I have some organized boxes of parts: nuts, bolts, seals, washers, etc. I also have several generic boxes: transmission parts, valve train parts, cables etc. that are not carefully organized and I’m not sure what they contain. The above list is accurate, but does not include everything.

“I had it rebuilt/restored just prior to COVID with the thought of keeping it as is. I personally would not race it and probably wouldn’t let anyone else race it. We need to downsize our stuff prior to relocating to a smaller home.” He notes that it ran when parked and it is currently on display and drained of fuel.

Cosmetic Blemishes:
The seller notes “a dent in the right side of the tank as though the bike had been dropped and a clip-on handlebar hit it. It has three sets of fairings, none of which is in perfect condition, but all are in good shape.” 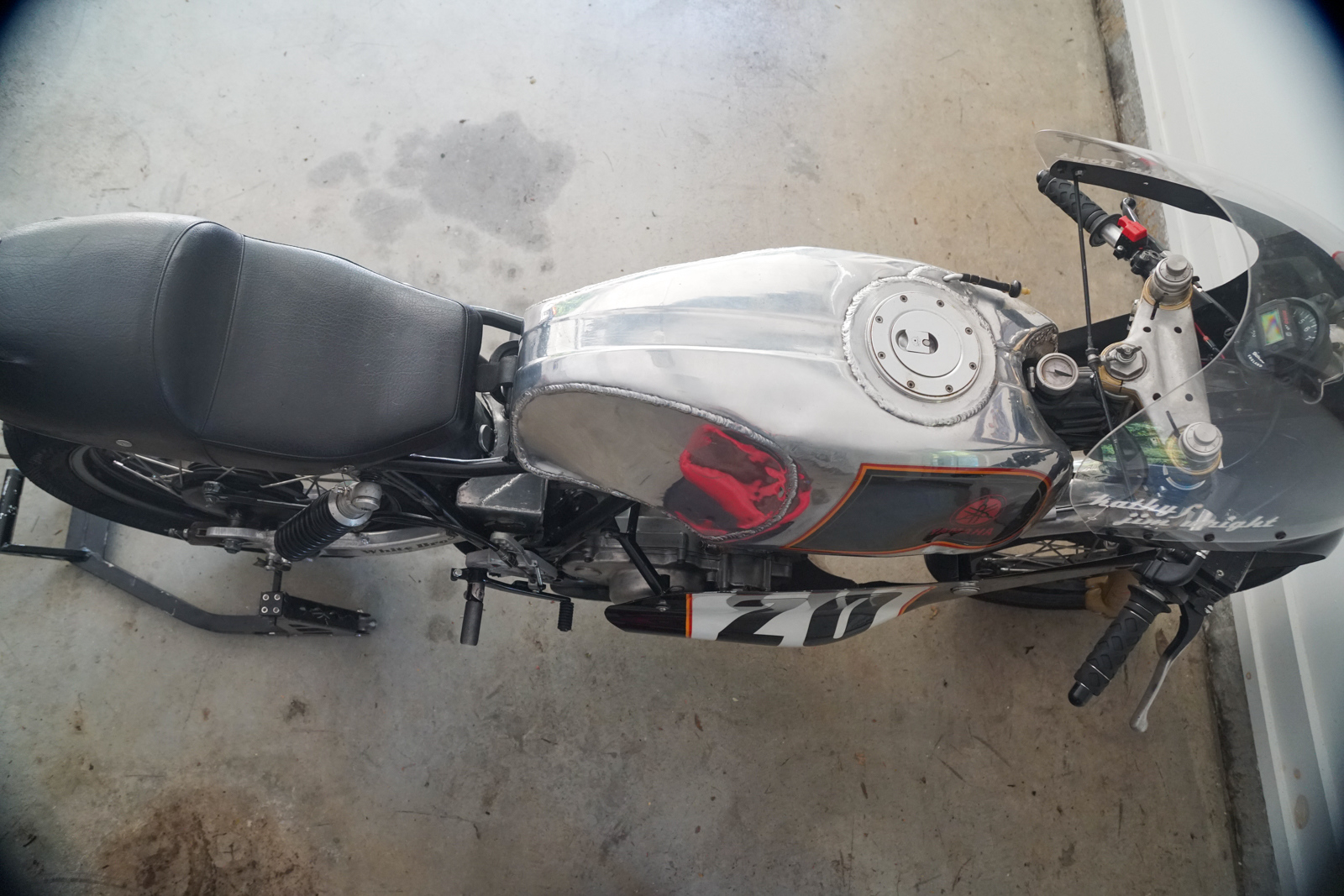 He adds that there are no known mechanical issues. “Consideration should be given by a buyer who plans to race it to rebuilding or replacing the muffler.”

Currently located in Tryon, North Carolina, this Yamaha is offered on a bill of sale only. Please note that the seller does have the original New Jersey title, however “it was not signed by the previous owner who died before the bike was sold to me.” Have any SR500 stories or questions about this listing? Let us know in the “Comments” tab!