Additional photos of this Honda CBX are available here for your perusal.

In the late 70s, the big four Japanese companies kicked off a horsepower war that by stuffing increasingly larger engines into their usual frames. When it came to Big Red’s turn, Honda decided to push boundaries and utilize their first 6-cylinder engine in a production motorcycle. Benelli actually beat Honda to the punch in terms of 6-cylinder bikes, but the Honda CBX1000 was easily the most technologically advanced bike of its day – and with a 1/4 mile trap speed of 117.95 @ 11.36 seconds, it was the fastest, too.

In a 1978 review, Cycle Guide said “The CBX is the Vincent Black Shadow of 1979.” The Honda CBX1000 only lasted for five years, but just like the Vincent, it led to a new wave of sports-oriented motorcycles. A 6.1 gallon tank was necessary as the 6 individual carbs and monster power led to mpg figures in the 20s.

But miles per gallon is a metric that we don’t care about with this CBX (VIN: CB1-2016863), as it’s been modified to go fast and be thrilling in the process. 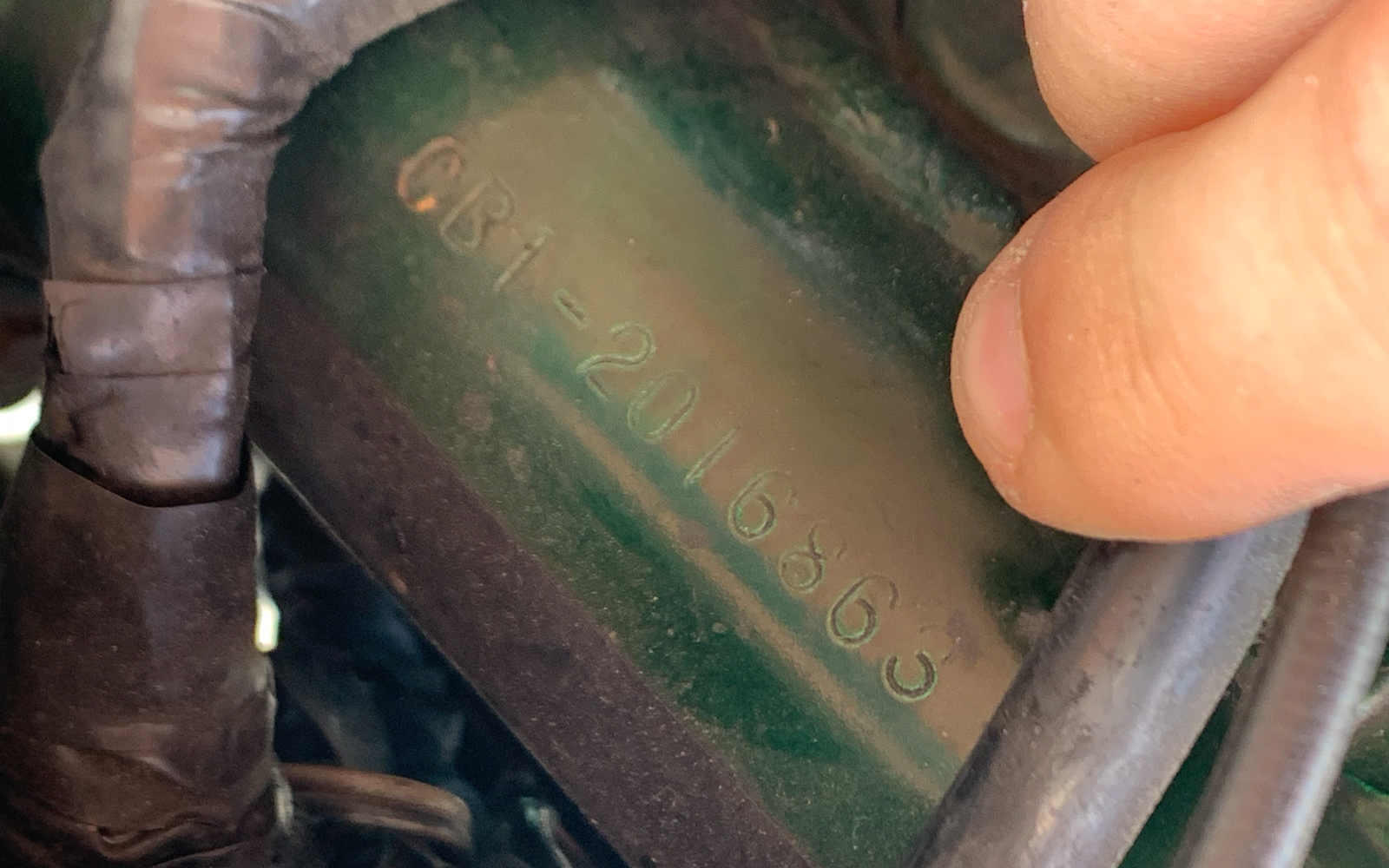 It’s a well-known bike in the CBX community and has been featured featured on the catalog of Tim’s International Motorcycle Supply as well as the Fall 1993 issue of the CBXpress. It was built in 1992 and 1993 with at a cost of over $16,000.

Once owned by our buddy Phil Taber (there’s a good chance you’ll see him if you stop by our shop), this became known as the “E Ticket Ride” – a reference to the early days of Disneyland in which the E Ticket got you on the best and fastest rides.

PSI is displayed on a Mr. Turbo boost pressure gauge. 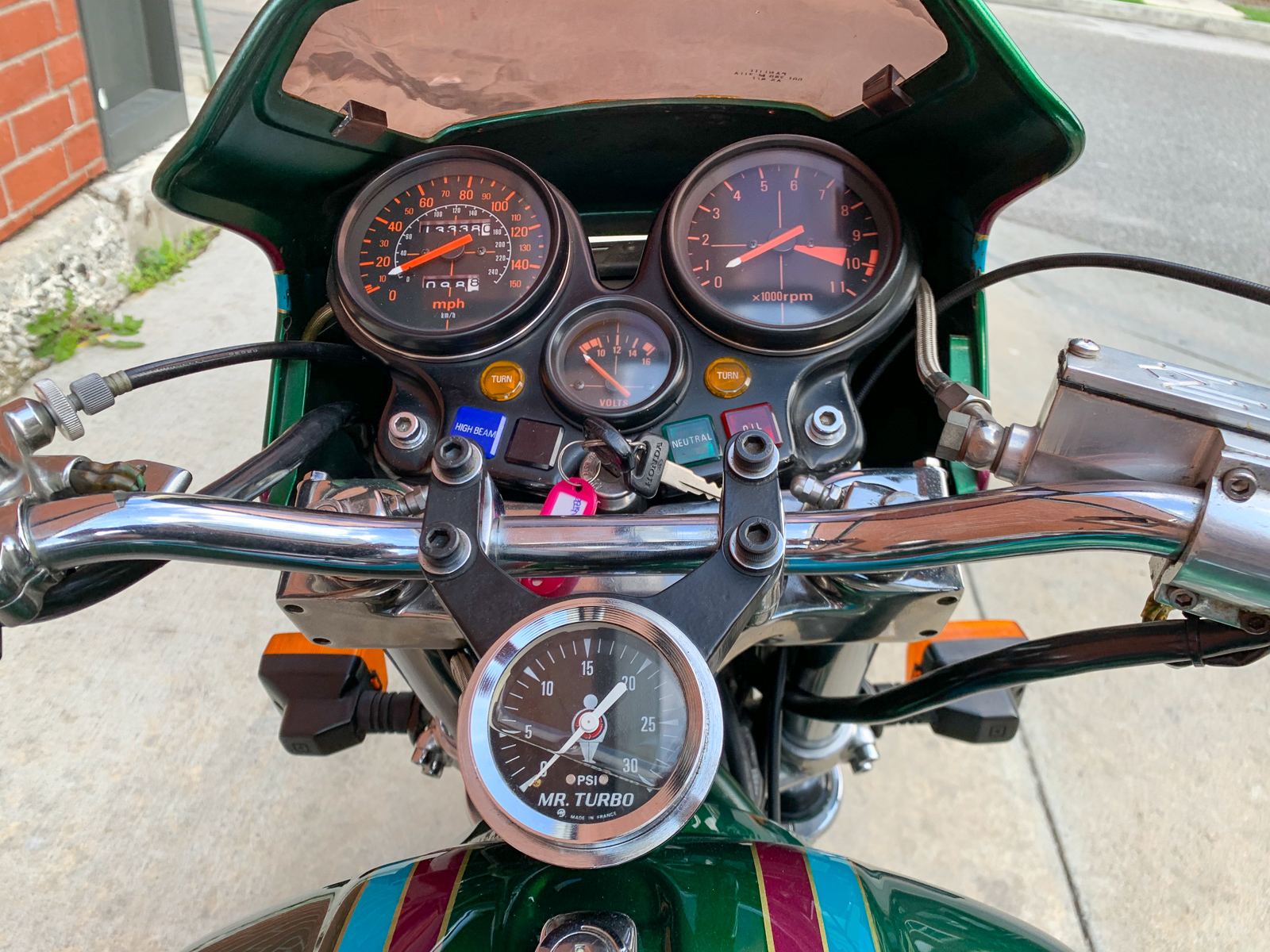 Keeping everything in control is a set of Ohlins shocks. 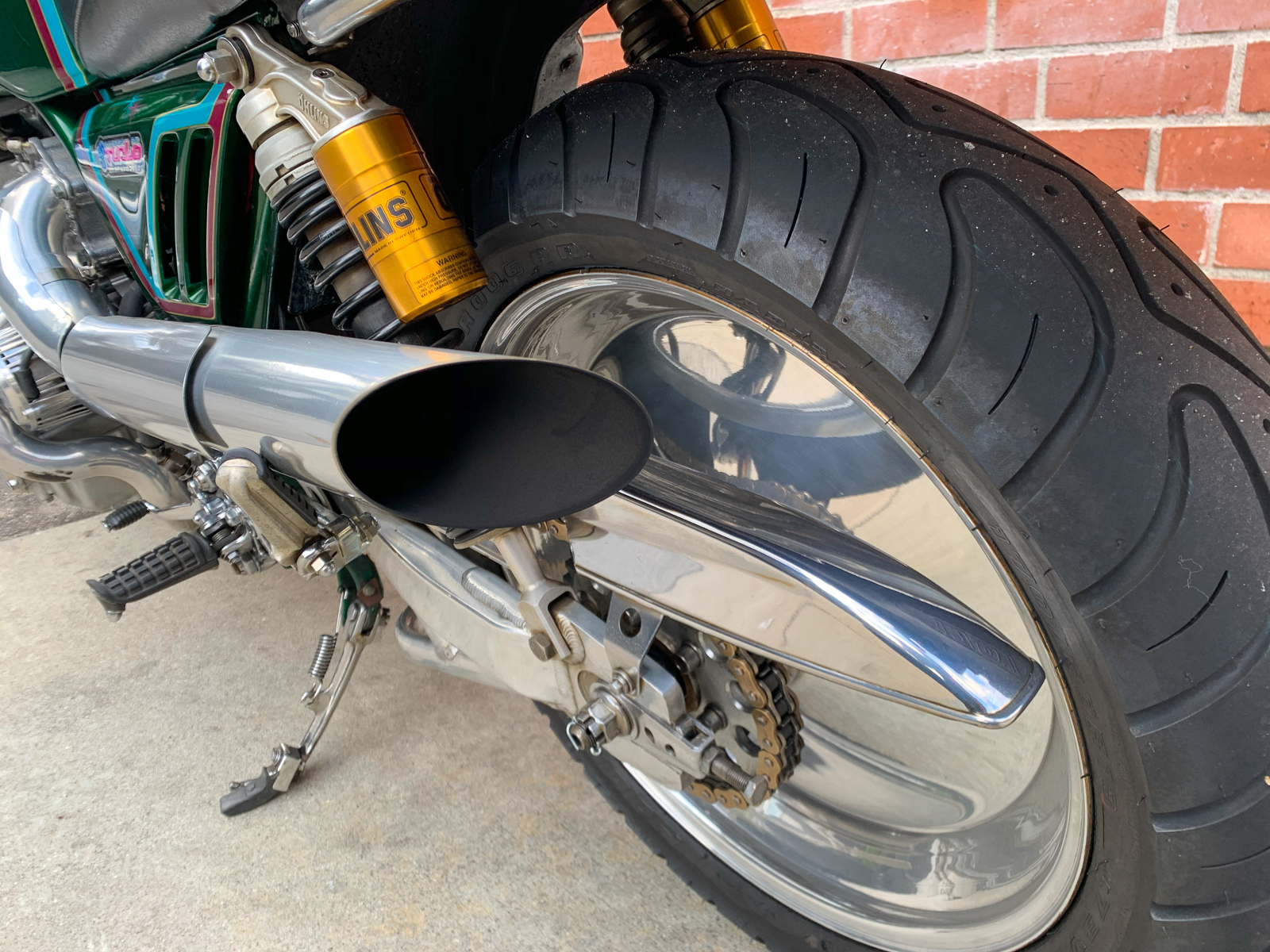 There’s a leather Corbin Gunfighter seat with a custom CBX logo on the passenger portion.

As if all that forced induction wasn’t enough, the sale also includes a nitrous system (that we removed as it was a bit overkill). It comes with 2 polished bottles and two color-matched bottles. The sale also includes a more streetable carb as well as a bank of OEM carbs if the next owner wants to pull the turbo off. We recently gave it a $800 service that included new tires, a new battery, new fork oil/dust seals, and a detail. The current carb is best suited for flat out running so she doesn’t like idling when the motor is cold – Phil Taber says that it will be much more street friendly if you swap to the additional carb that is supplied. Our White Glove service can handle this for the new owner before pickup/delivery if desired. 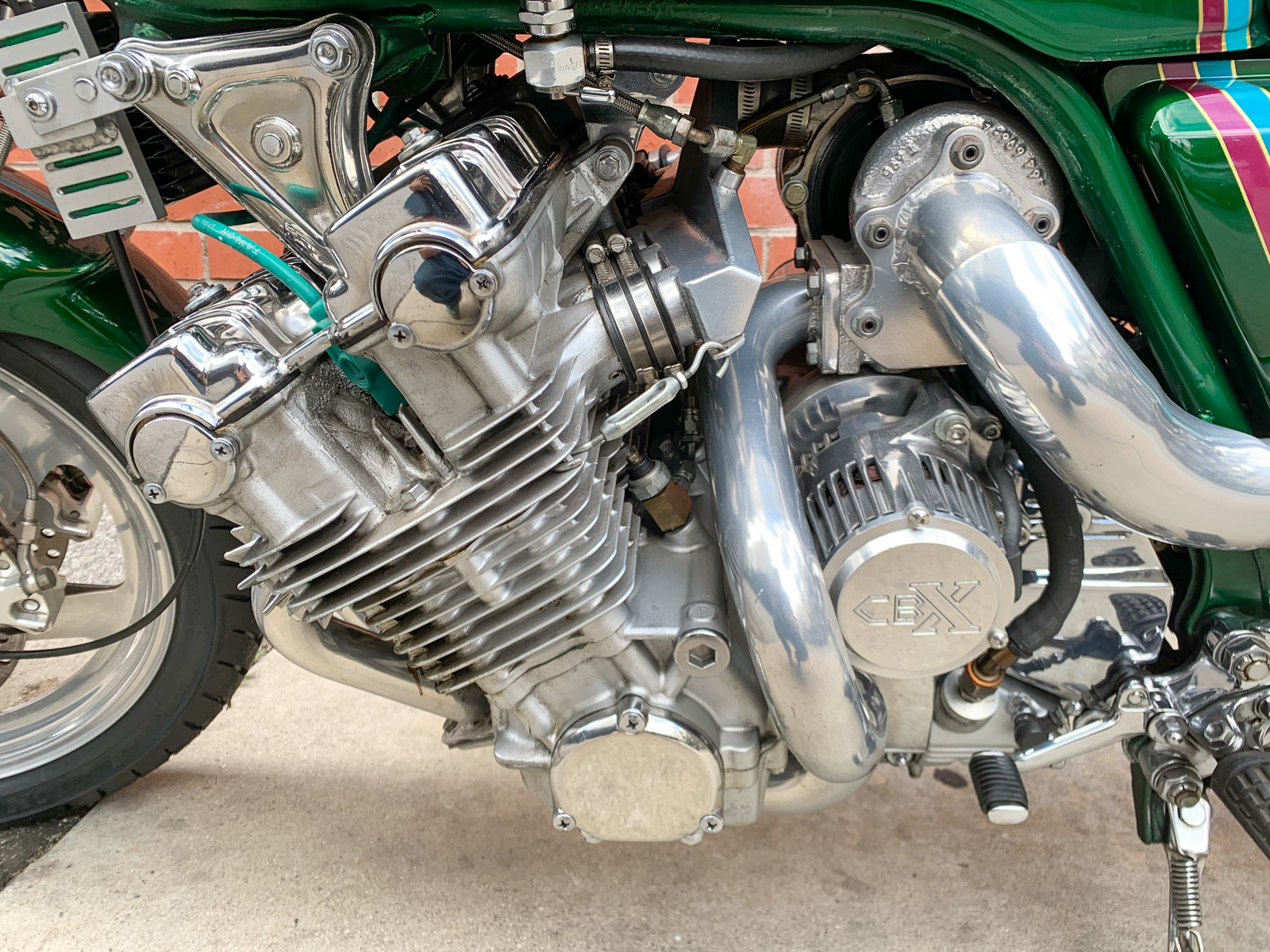 Adam took this out a couple of weeks for a quick ride up PCH and couldn’t say enough good things about it…but he also wants it gone so he doesn’t get a speeding ticket! 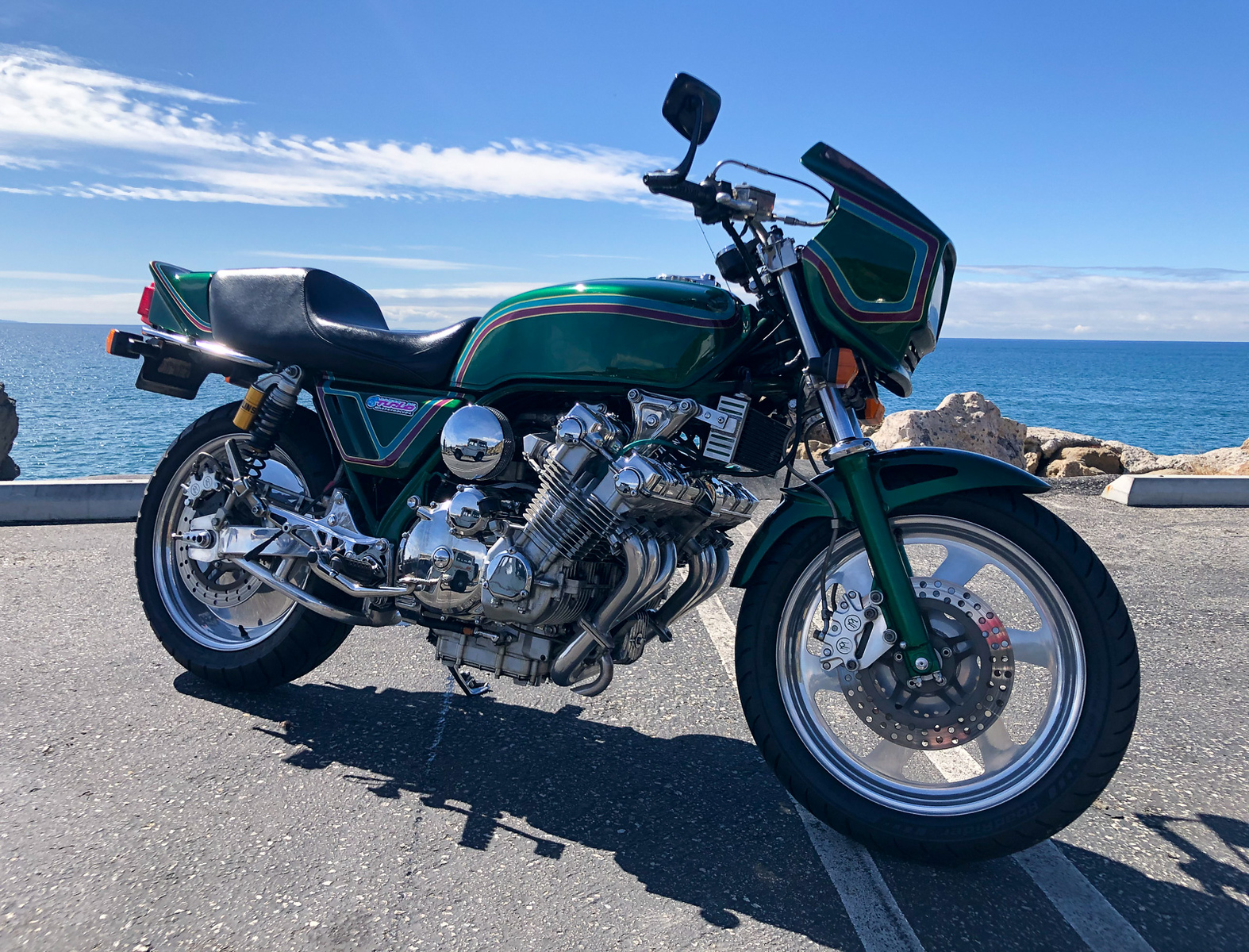 Cosmetically, this CBX has a CB1100F chin fairing and a wild custom paint job.

It’s hard to describe a bike like this CBX as it truly has to be ridden to be believed. Who’s going to step up…and will they put the nitrous kit back on?

How many miles are on the build? What carb is on it now and what is the “street friendly” one?

Currently a Bendix/Zenith adjustable mainjet. Other carb is an HSR 42

Can we hear this on the dyno, please? 😀

I’d do that except we just put new tires on her and don’t want to burn them up. I’ve gotta think there’s one out there of this bike considering how well known it is. HMMMMMM