A full photo gallery for this Interceptor is available here for your perusal. Please let us know if you require any additional photographs!

The original CB750 made Honda a serious force to be reckoned with, but a decade or so after its release, its fellow Japanese manufacturers had caught up and Honda’s dominance in the market was waning. Big Red’s answer unexpectedly came in the form of a new V4 platform. A year after the Sabre and Magna models were released in the US in 1982, Honda replaced the shaft-driven V4’s with the much sportier VF750F Interceptor. The new V4 was born out of new AMA regulations in 1983. That year, the American Motorcycle Association’s Superbike class announced it’d be limiting the displacement of four-cylinder bikes from 1000cc’s down to 750, and requiring all entries to be production models using the stock chassis.

Despite being based on the (V45) Sabre, the Interceptor was a race replica through and through. The bike was built around its own competition-derived twin-spar alloy frame equipped with a cross-braced front-end and cast alloy swing-arm. The thing also sported ComCast aluminum alloy wheels — with a 16-inch unit in front — and dual-piston calipers biting floating discs.

Suspension was comprised of pieces developed by Showa and Honda with air-assist forks using Honda’s TRAC (Torque Reactive Anti-dive Circuit) system and its Pro-Link setup paired with one of Showa’s air-assist shocks. Fully adjustable at both ends, the Interceptor’s suspenders could be dialed in to suit a particular rider and/or track.

Powering the Interceptor was a tweaked version of the Sabre’s power plant: a liquid-cooled, 748cc, 16V, DOHC, 90-degree V4 engine with gear-driven cams, four valve-heads, and 10.5:1 compression. Fed through four 30mm Keihin carbs, the V4 made a claimed 86hp at 10,000rpm and 52 ft-lbs of torque at 7,500rpm, weighed around 550lbs wet, and had a top speed of almost 135mph. The VF’s engine was mounted directly onto the chassis, unlike its predecessor’s rubber-mounted setup. 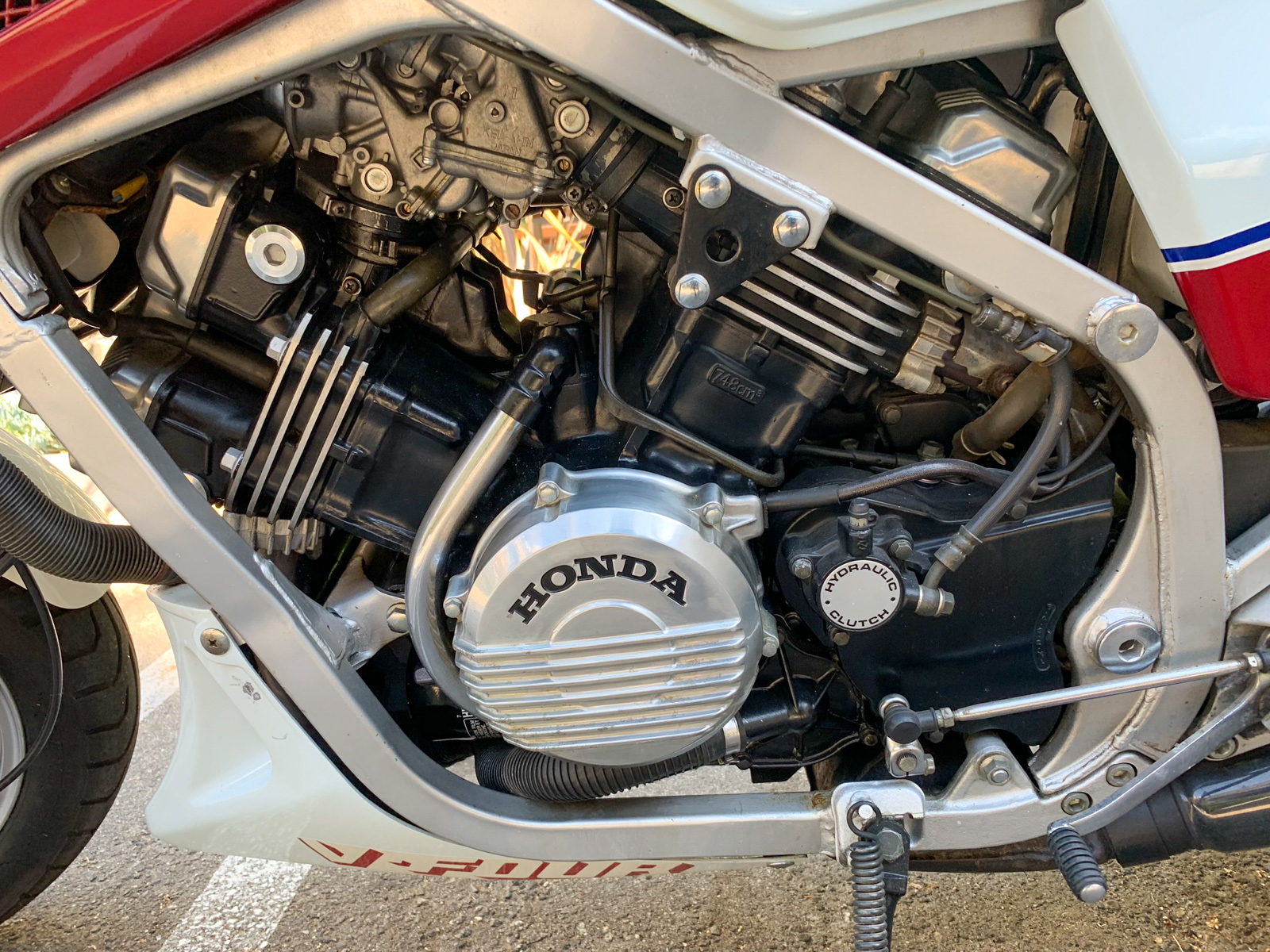 Revised combustion chambers and cam timing afforded the V4 a few extra ponies over the Sabre, and how that power got to the rear wheel was a whole other story as well. The VF used a five-speed gearbox instead of the Sabre’s six-speed, supposedly done to make adapting a chain final drive setup easier. The model’s transmission also featured a trick new slipper clutch.

Adhering to the 1983 AMA regulations ultimately prompted Honda to produce its first-ever road-legal race-replica production model, — a type of motorcycle Honda still produces to this day. The VFs in showrooms were also extremely similar to the machines being campaigned by Honda’s factory racers. That was a major selling point for the bike, as it started dominating the competition right out of the gate. In its debut season in 1983, eight of the fourteen Nationals were won on the VF750F. 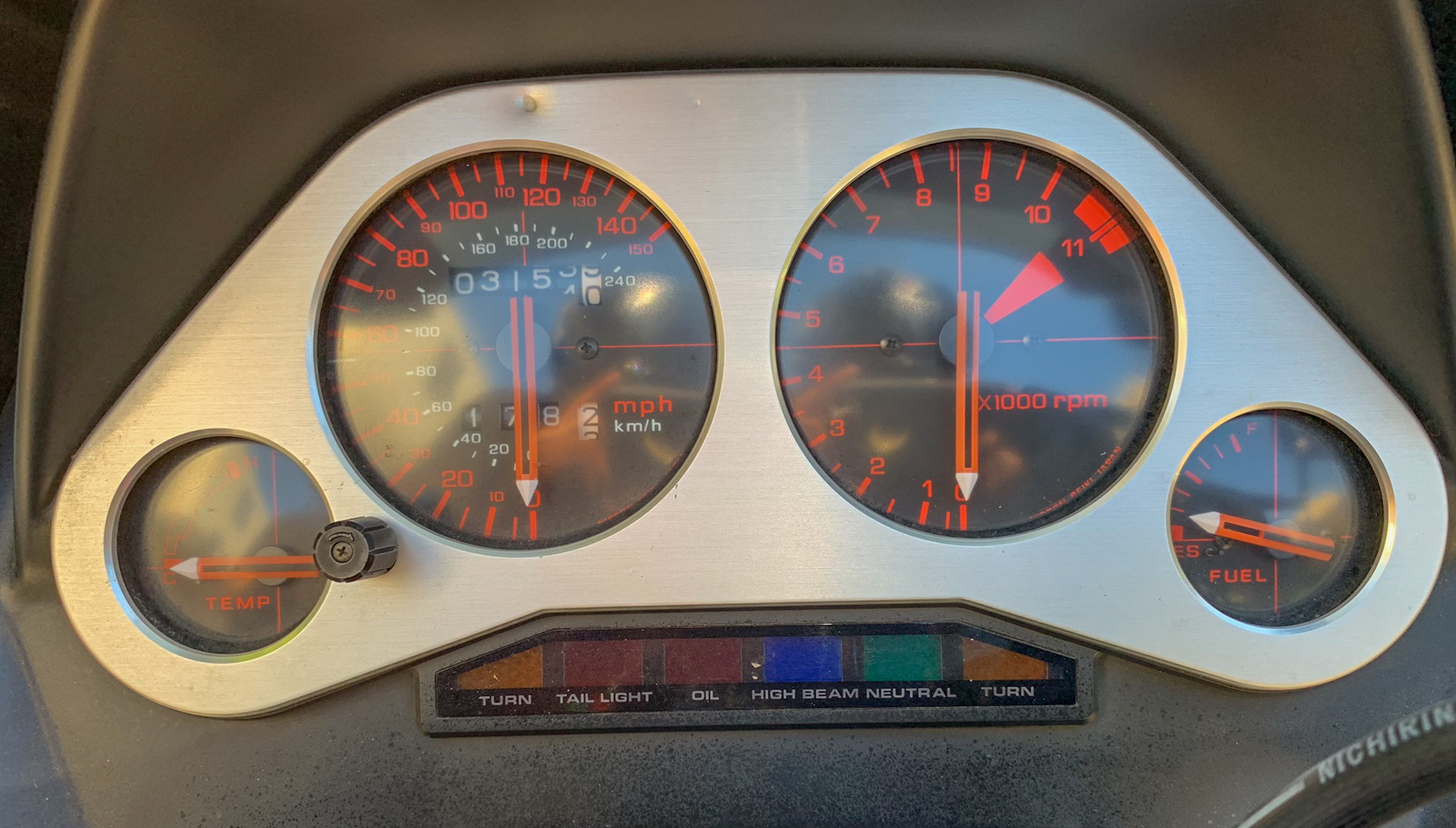 This particular 1984 Honda VF750F (VIN: JH2RC1508EM101890) has only 3,152 original miles. It is titled in Wisconsin with non-op registration. Bone stock and adorned in the classic red, white, and blue HRC livery, it does appear that the bike has a repaint where the red is slightly off, and there is a small chip in the front of the tank.

Mechanically things are in good shape — as one would expect with so few miles — though the horn does not work. Our white glove service is available to help you address that should you decide to purchase the bike. Otherwise it’s an incredibly clean, low-mile example of the first modern race-replica sport bike to come out of Japan.

A true race bike for the streets, the Interceptor was well received by both the public and the media. In the December 1982 issue of Cycle World, one writer stated, “The handling is a treat, the power more than adequate and the appearance, the Interceptor’s primary thrust, spells out its job: To boldly go where only racebikes have gone before.”