Click here for an instaVIN Motorcycle History Report on this 1985 Honda NS400R. Additional photos are available here for your perusal.

In 1983, Freddie Spencer became the world’s youngest 500cc World Champion, and he did it on a Honda V3. Honda responded by releasing a 250cc production bike to commemorate the win, but it took them until 1985 to build something closer to the actual size of Freddie’s champion. That was the NS400R, and even though it gave up 100cc and plenty of power to the race bike, Honda called it a “race replica”.

The two-stroke V-3 displaced 387cc and it was good for 72 horsepower and 37 pound feet of torque, both at nearly 10,000 rpm. Oh – and the whole thing weighed less than 360 pounds. For more information on the NS400R, check out this article from Classic-Motorbikes.net. Depending on who you talked to, the NS400R wasn’t as fast or aggressive as the 500cc race reps from Yamaha and Suzuki – but the tradeoff was that this was a confident handling bike. A review rehosted on Motorcycle Specs says “the NS is exciting and pretty near faultless.”

This example (VIN: NC191001411) came out of the David Silver collection and is offered with a clean Pennsylvania title.

We acquired it out of the Mecum auction do not have any history on this machine, though we got it up on the lift here and Steve the Professor went through it so it’s now a runner:

We discovered a leaking petcock, so we rebuilt that and replaced a couple of hoses. Steve also installed a new RK chain and new Bridgestone Battlax tires. 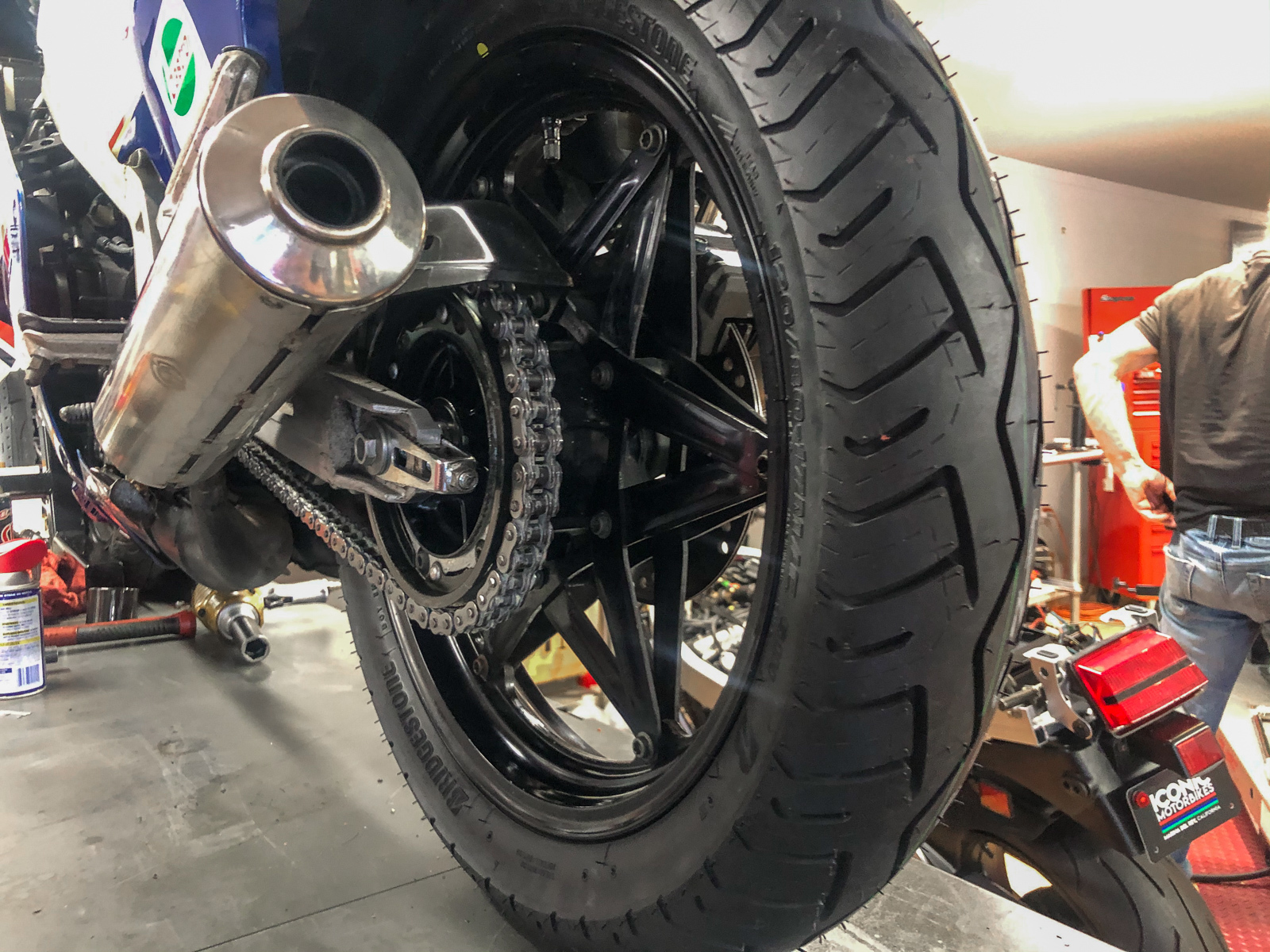 It now starts right up and the next owner will be able to ride it as is. With that said, we did not want to put too much money into it to keep the price down for the next owner so if you plan on riding it regularly, we’d recommend that you install new spark plugs and flush the fluids – our White Glove service is glad to handle that for you if desired. We’re also glad to address the paintwork if you’re looking to make it look like new again as well.

It’s mostly stock and we see a little bit of rust on the kickstand.

You’ll note by the photo of the top of the motor (under the tank), she does show some aging/patina.

NS400R’s went for silly money last year and we get more and more requests to source them. Here’s your chance to get one that would make for a great rider – fix it up or a bit or ride it as is. As always, you can lean on us for paint work or anything else that you desire!