Additional photos of this Gamma are available here for your perusal.

To capitalize on the brand’s reputation for building high-performance race bikes, Suzuki decided to develop a slightly-tamed production version of its competition square-four machine. The production model’s engine was based on the XR45’s race-bred 130 hp unit. 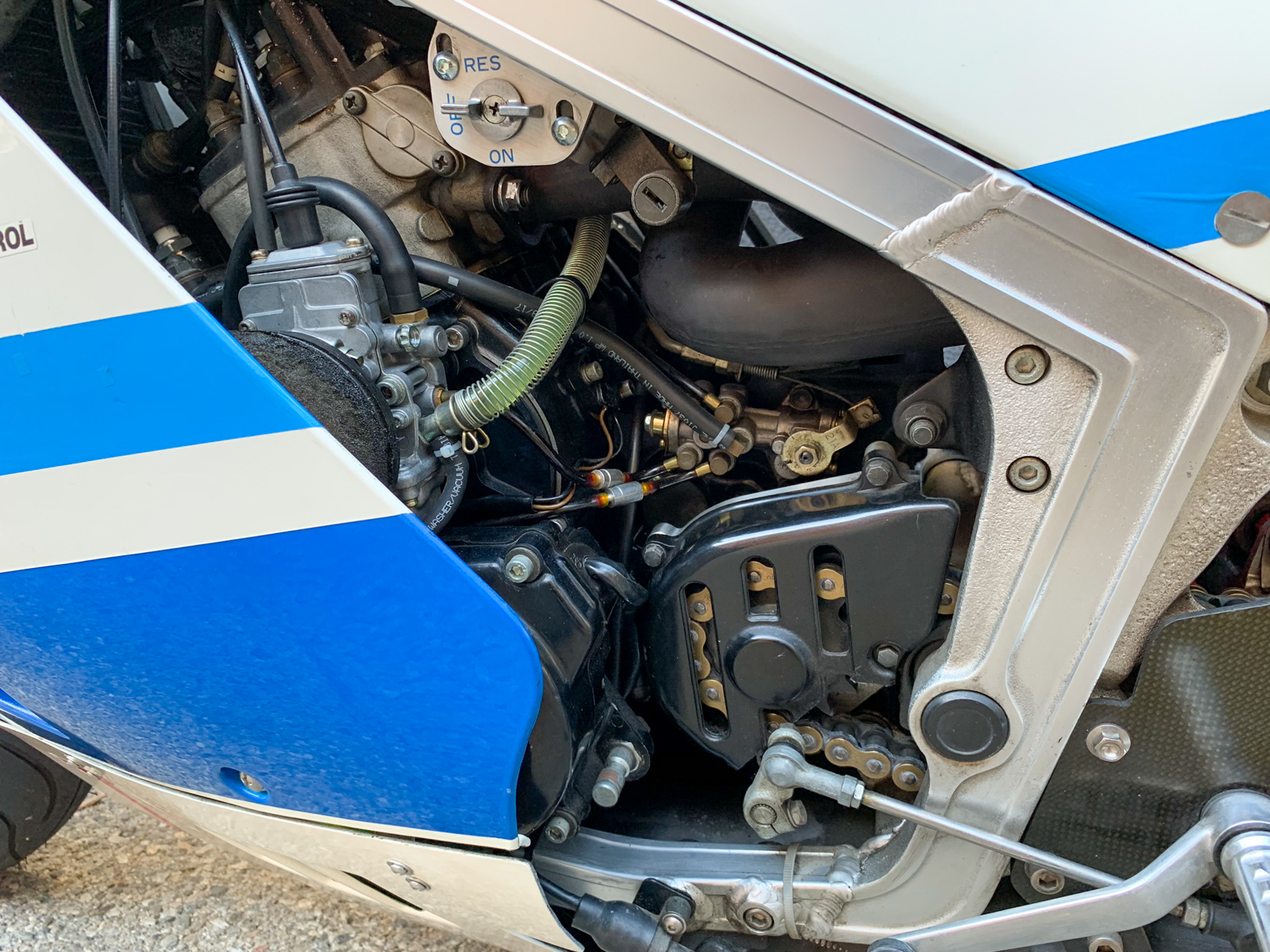 The 498cc, rotary valve, twin-crank, two-stroke, square-four featured Mikuni 28mm flat-side carbs, an exhaust utilizing SAEC (Suzuki Automatic Exhaust Control), a six-speed cassette-style gearbox, and thermostatically controlled liquid-cooling. Elements such as the barrels and crankcases on the RG500 were virtually identical to those on the XR45, though a few changes were obviously made for the sake of the road-going model’s longevity.

The race-derived motor put down as much as 95 hp at 9,500rpm and 53ft-lbs of torque at 8,000rpm. Weighing in at just 340lbs dry, the RG offered a top speed of over 130mph and could fire off quarter-mile runs in 11-seconds flat. The Suzuki’s 16-inch front-wheel held a set of twin 260 mm discs and quad-piston calipers while the 17-inch rear hoop sported a single 210 mm disc with a dual-pot caliper.

Like the powertrain, the RG500’s frame was also borrowed straight off the race bike; a lightweight box-section aluminum alloy perimeter frame with a cast steering head that funneled air toward the carbs. Tacked onto the front was a set of 38mm forks with preload adjustment and Suzuki’s “POSI DAMP” anti-dive system, while out back the square-section double-sided alloy swing-arm was hooked up to a full-floating mono-shock.

In its first year in ’85, some 7,340 examples were produced, while another 1,412 units were built in ’86, followed by a final 532 specimens in ’87, making for a total of only 9,284 in its entire three-year run. Due to emissions regulations (among other reasons), Suzuki never officially sold the RG500 Gamma in America, though it was offered in Canada so a few grey market examples have found their way across the border. The company also produced a 59hp 400cc variant — the RG400 — for its native Japanese market, as well as limited-edition versions of the RG. 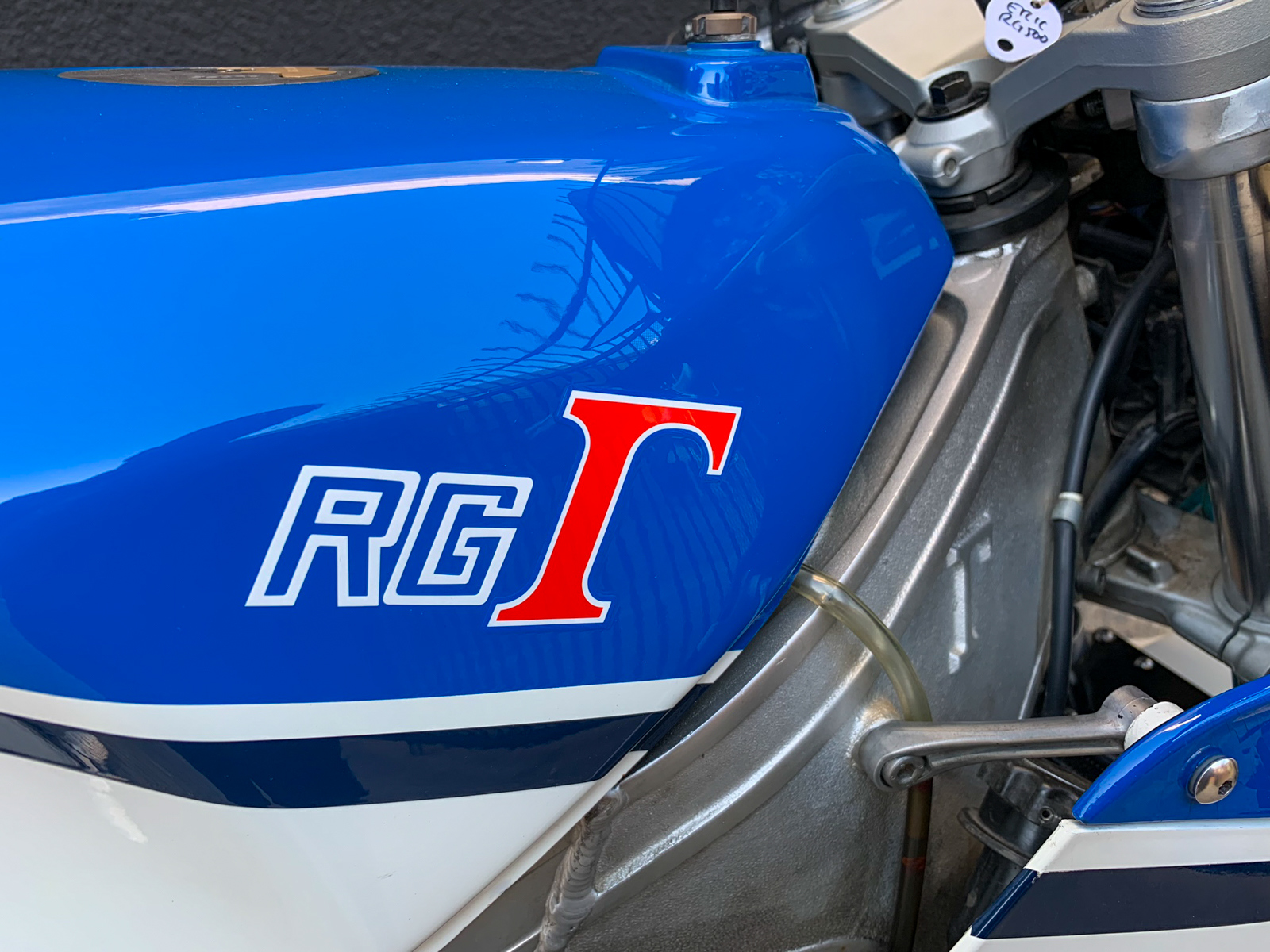 The original gauge cluster (kph) was replaced with a mph unit, so the indicated mileage is higher than actual mileage – we’d estimate the latter to be approximately 5,000 miles. In its current state, this example has been dyno’d at 100 hp at the crank! It also received a complete servicing at the end of 2018 from us – the work included a fork rebuilt, fluid flush (brakes/coolant/transmission, carb rebuild, new tires, and several small parts.

Despite its grey market nature, this specimen comes with a California certificate of title, which can be a real hassle to get (that is if you can even get it at all). Overall the bike is in remarkable shape both inside and out, though it does have a few minor imperfections in the form of a couple small scratches on the upper fairing and lower cowl (viewable in the photos).