Click here for an CycleVIN Motorcycle History Report on this 1986 Yamaha FZ750. Additional photos are available here for your perusal. 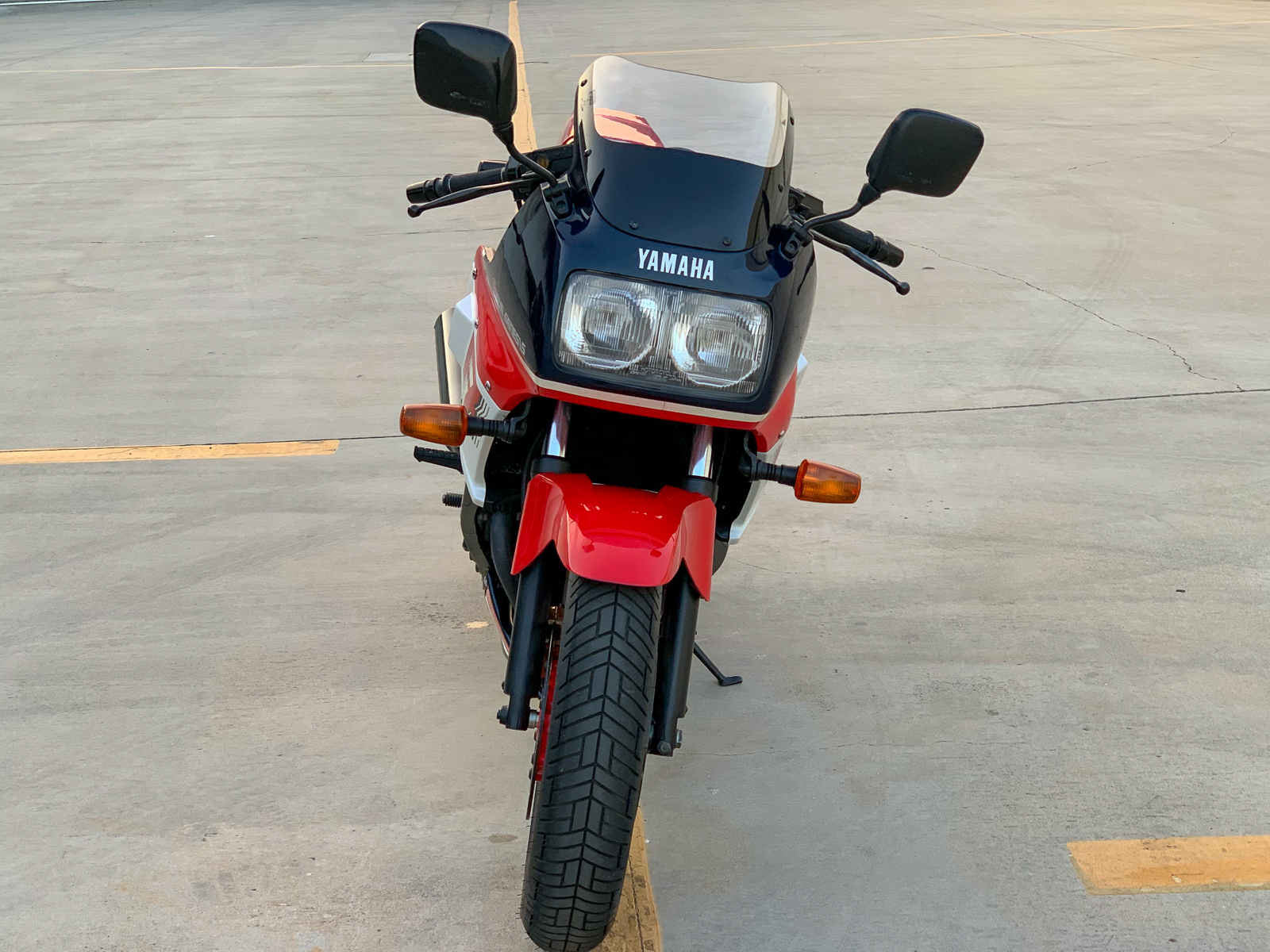 Upon its introduction in 1986, Yamaha’s FZ immediately took the 750cc sportbike crown – MCN says it was “as fast as a Kawasaki GPZ900R” and called it “a wonderful piece of engineering.” 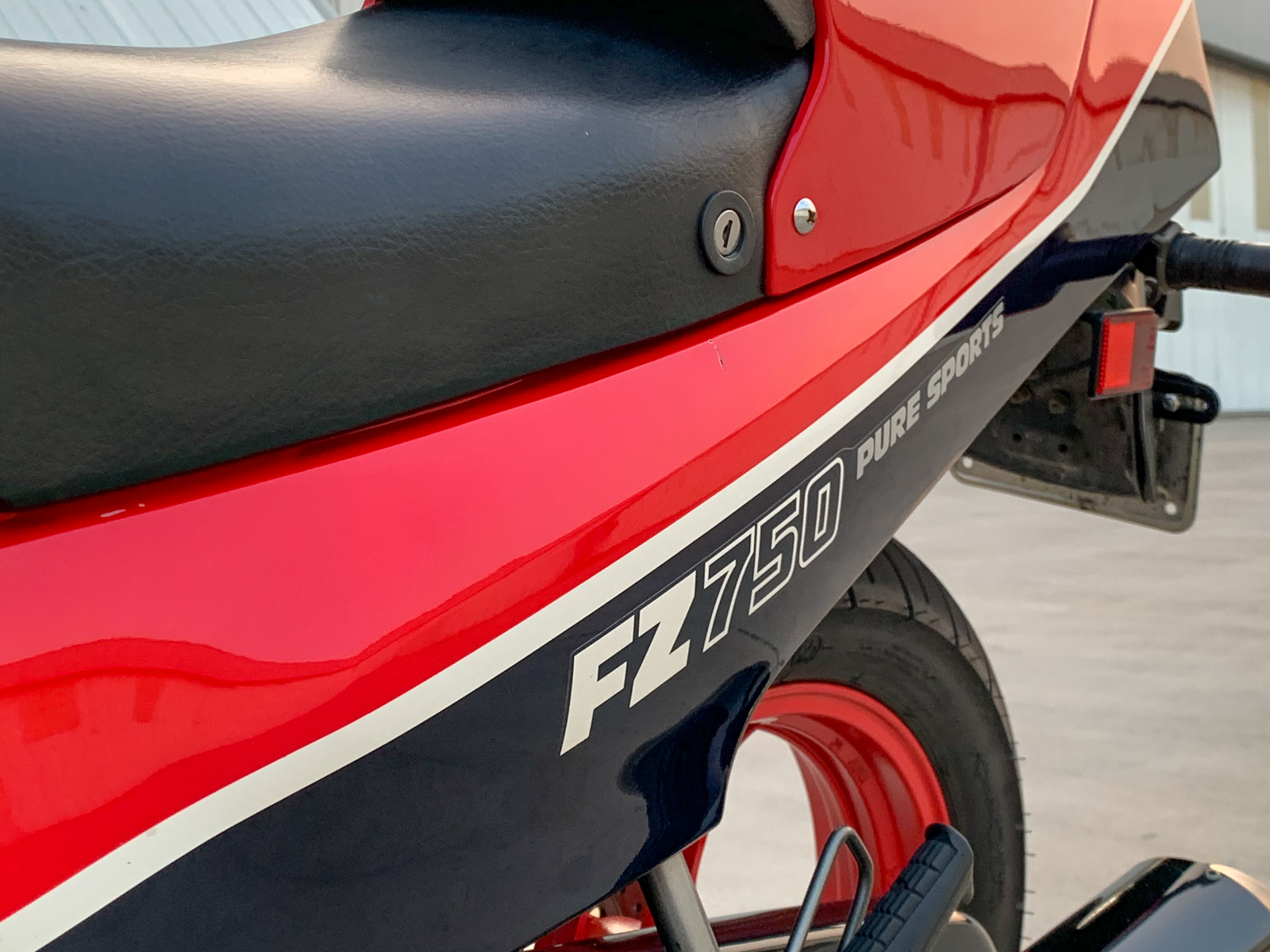 The main advancements were found in the Genesis engine, which featured 5 valves per cylinder and wowed just about everyone. Cycle magazine said “It’s hard to conceive of this level of power from an over-the-counter 750 engine…yet the FZ delivers the goods so eagerly it makes other 750s seem as if they belong in a race for freight elevators.” The motor was rated at 106 horsepower at 10,500 rpm, enough to get a top speed near 150 miles per hour.

This example (VIN: JYA1LJ006GA000540) is offered by the third owner, who has owned it for approximately five years. The original owner was a Yamaha employee that the current seller used to work with at Yamaha USA’s corporate office in Cypress, California 25 years ago. 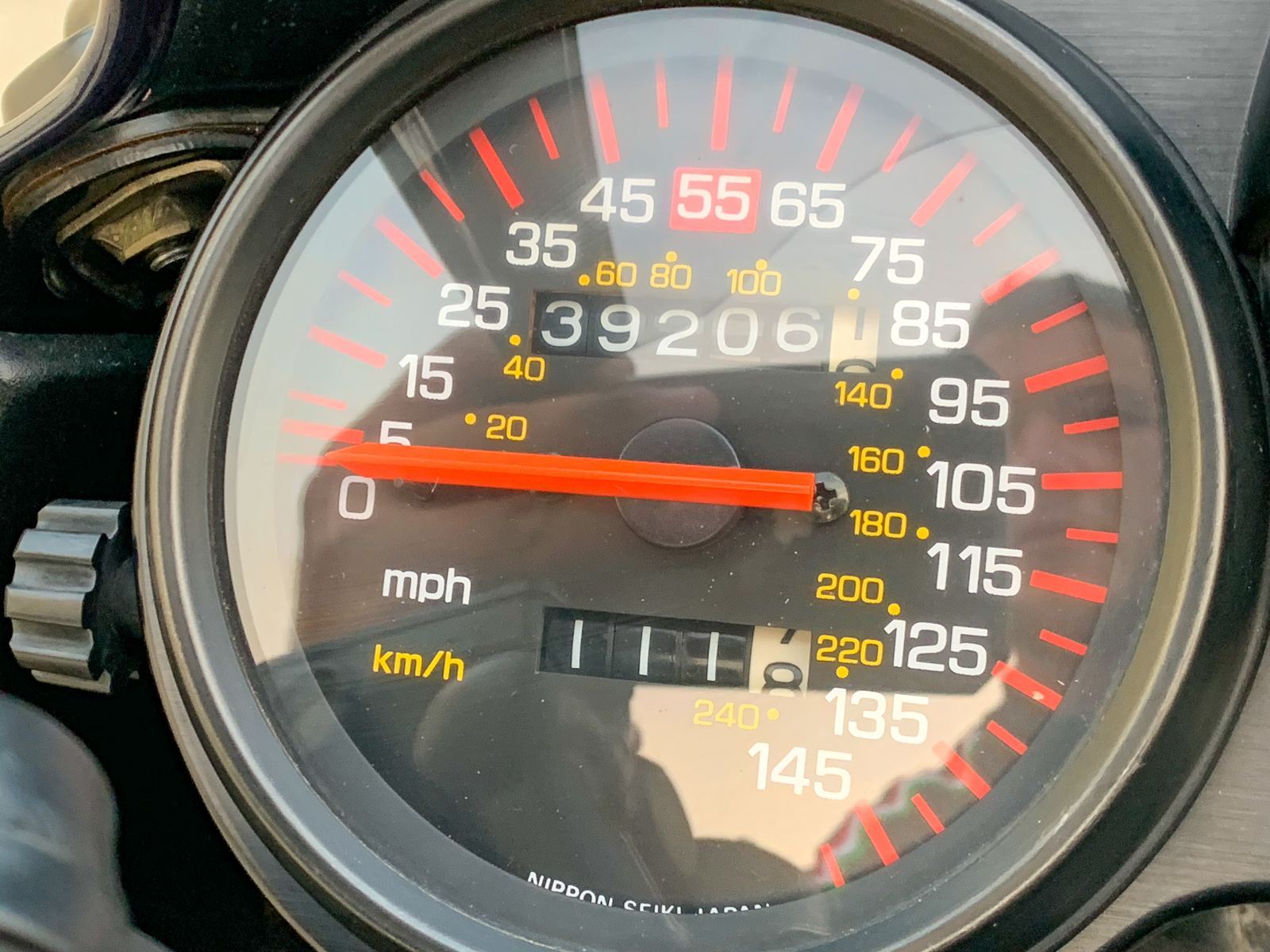 The bike has spent its entire life in Southern California and was always garaged while in the current owner’s possession. 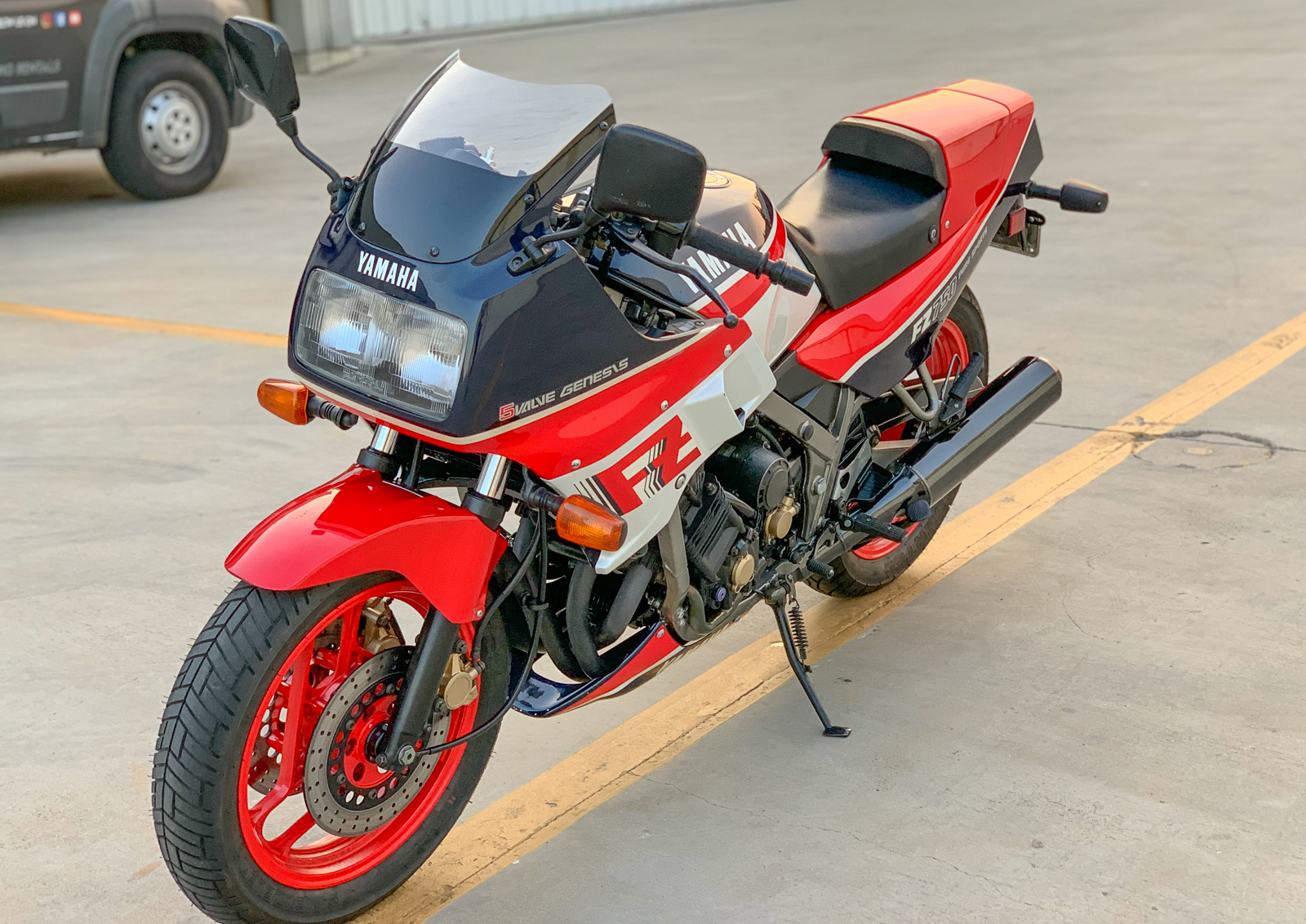 The rare rear cowl is an OEM unit that the seller sourced from the UK. The rear OEM seat strap is included in the sale. 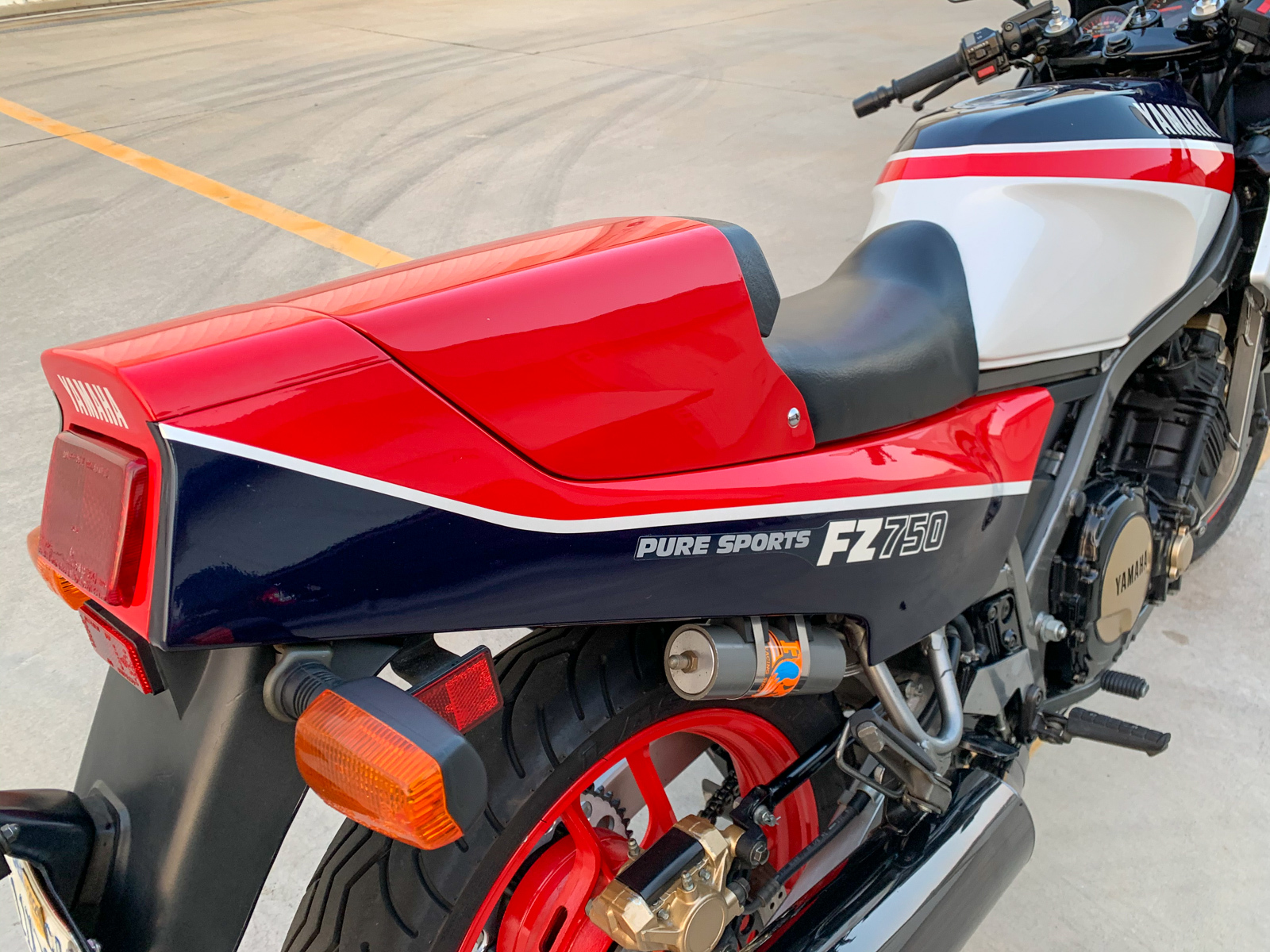 With the exception of the seat cowl and chin fairing (a fiberglass reproduction from the UK), the paint is original. It is equipped with a Fox shock (original is included).

The grips are from a Yamaha TZ250.

The wheels are from a later model FZ. 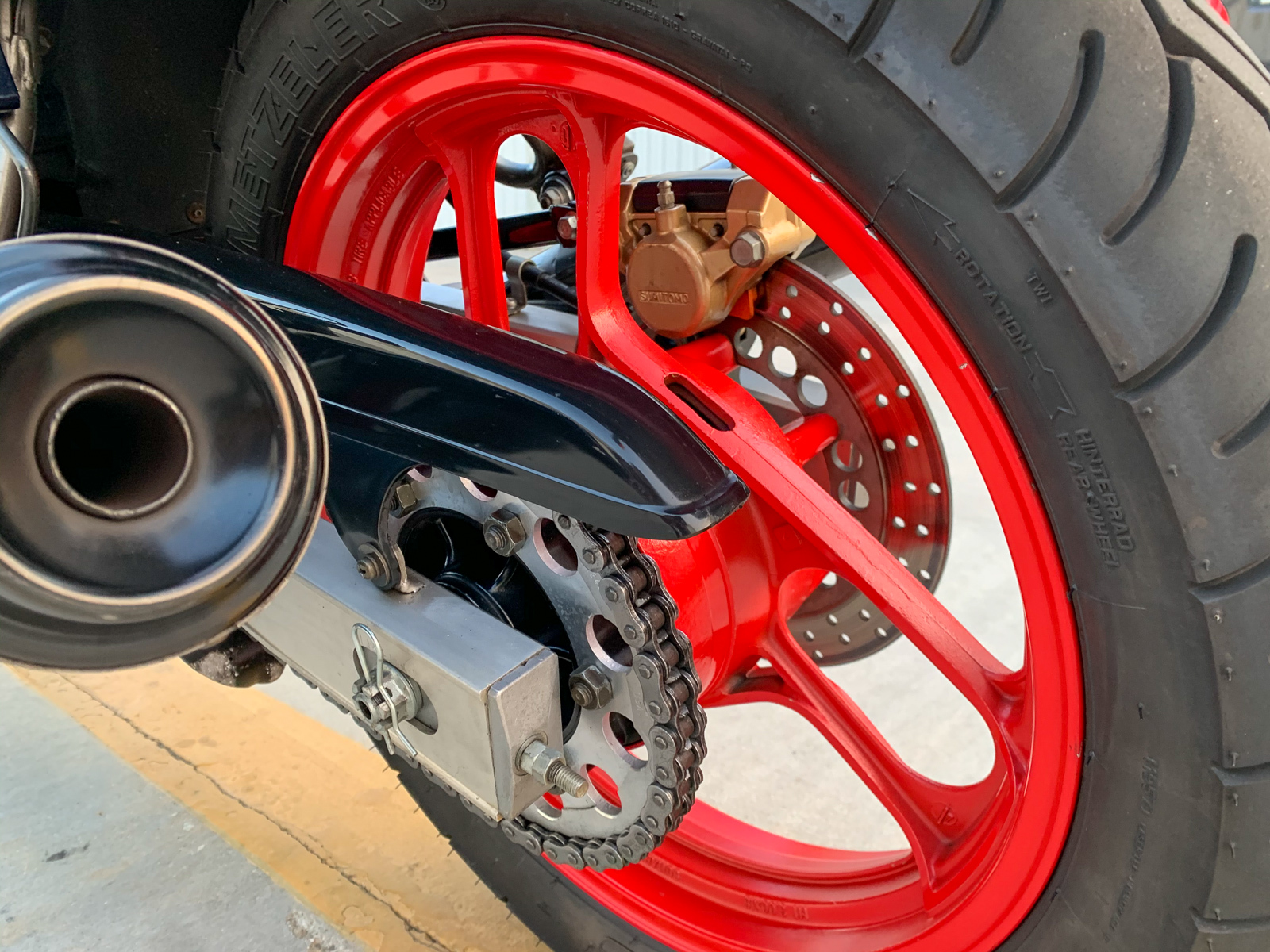 In addition to the paint wear shown above on the tank, we note a crack in the right fairing from a mounting hole and wear on the rear seat pad mounted to the cowl. 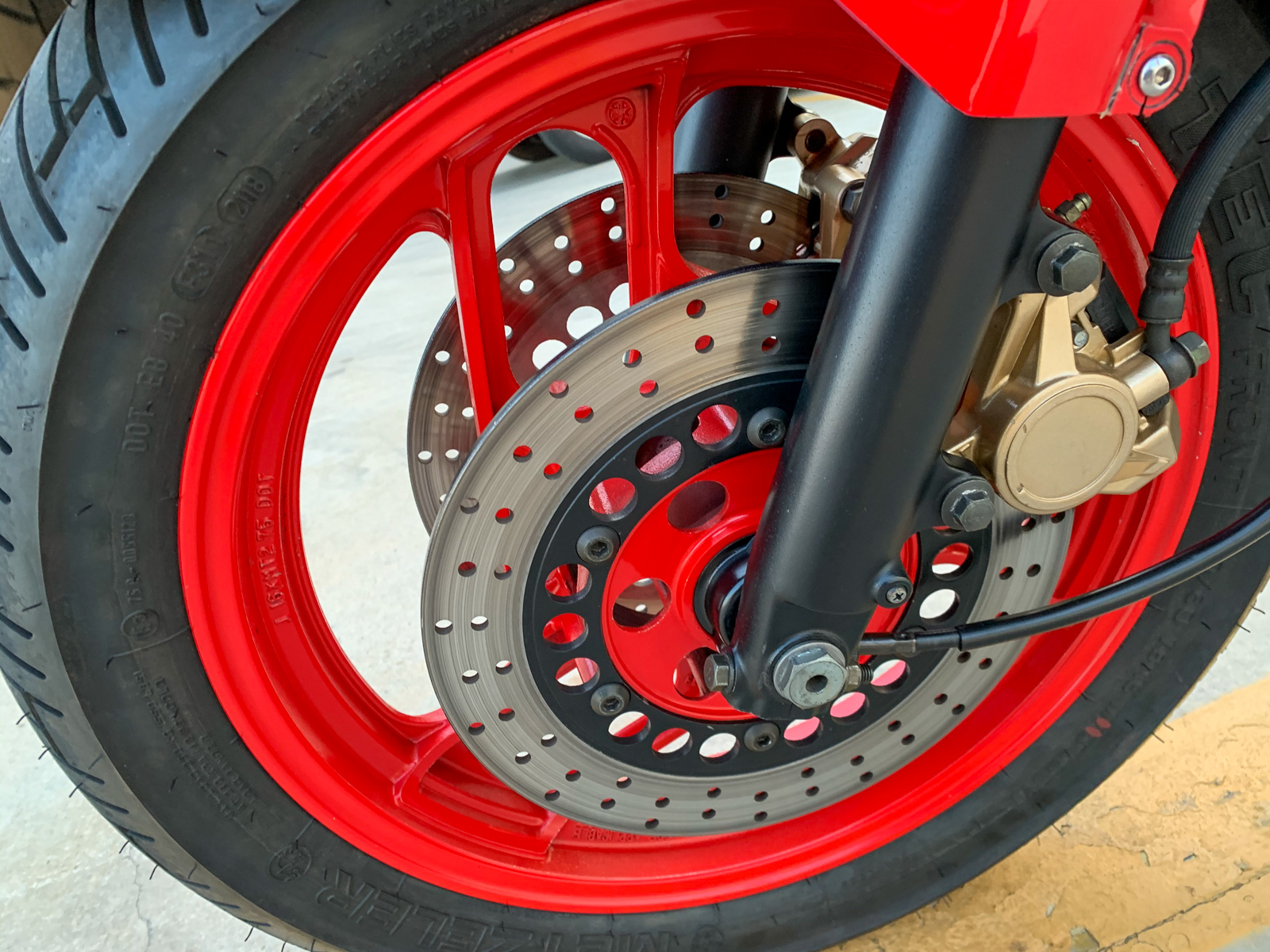 He also notes that the speedometer is noisy at freeway speeds.

Currently located at our facility in Santa Monica, California for inspection (please schedule an appointment), this FZ is offered on a clean California title with registration current through December 2020.

The owner is a former Willow Springs regular who has spent countless hours cleaning this bike up. He’s very close to it, however he’s selling it as he has two – the other is a racebike that he wants to focus his FZ-time-and-efforts into. Have any FZ750 stories or questions about this listing? Let us know in the comments below!

Not true Roadracer….all 3 750’s you mention are actually very evenly matched at least in stock trim.

I’m a Yamaha fan but you’d better look at your 750 production class club results of the era… I was there, trying to draft… ABSOLUTELY dominated by Suzuki. I’ll guess.. 10 to 1? They may have been close on paper, they weren’t on the track. Doug Polen and many others made their their Pro names with GSXR’s – 750’s & 1100’s. Stock trim Suzuki 750: 100 hp & 396 dry weight. Only Yamaha’s and Honda’s that were winning were full Factory Yamaha & HRC bikes. Nothing a mere mortal could attain or afford. I’m a bidder btw so not trying… Read more »

DUDE, You called Me out, just keeping it real – Production 750 is BASED on stock bikes, with a pipe and jet kit only allowed… I said 750 Production, sorry to trigger you. You’re still incorrect. The ONLY place Yamaha’s and Honda’s won or placed in numbers when this bike AND my bike were produced was AMA Superbike, SBK or BSB with full factory riders and support. When the green flag drops, the BS stops and 100 pounds difference on the race track might as well be 50 hp. Have a fantastic day!

P.S. I said i LOVE this bike, and I do! Sold too many and should have kept a few at the shop.

Didn’t trigger anything….just a healthy discussion. By the way I saw the tail piece on “your” FZ so i found one and I am going to have it painted ….just love the look. Good Luck on the auction.

Outstanding example of an FZ750…. I own one and this one is just awesome. Hard to find them basically unmolested with a STOCK EXHAUST!!!!!