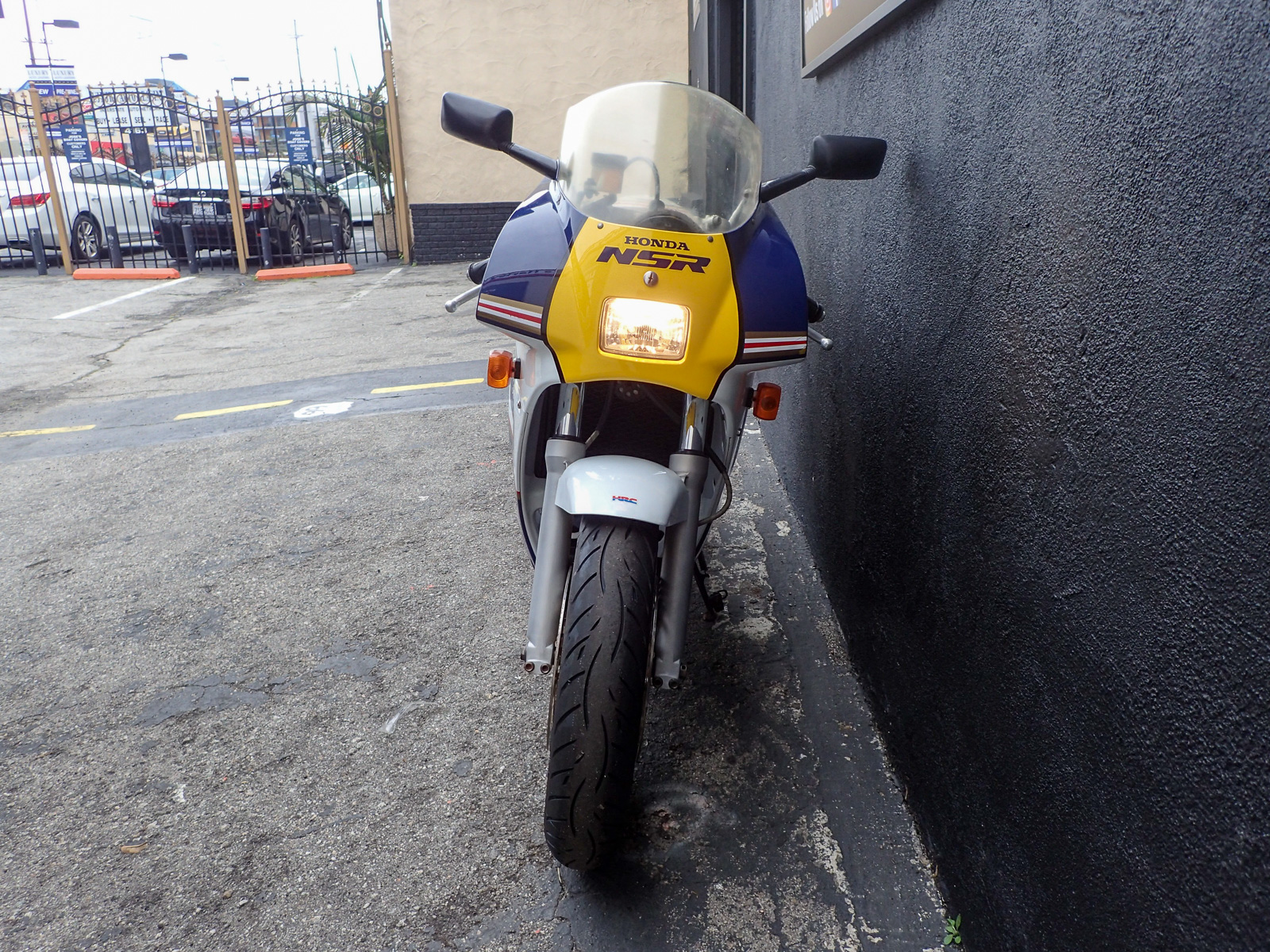 The NS was well-received, but it was up against some fierce competition. So Honda quickly went back to the drawing board, calling on its 500 and 250cc GP championship-winning race division to help deliver a major step forward from the MC11. In late 1986, Honda unveiled an all-new model; the NSR250R MC16. Aside from using its predecessor’s “Nikasil” (nickel-silicone carbide) coated cylinders, the MC16 was an entirely new model, not sharing any components with the outgoing model. At the heart of the NSR MC16 was a new-from-the-ground-up, liquid cooled, two-stroke, 249cc, 90-degree V-Twin — which could be traced back to the MVX250 — with a new extremely compact patented intake system. The engine cases were modeled after those on the 1987 RS250R works racer with a new race-style cassette-type transition with an integrated oil pump and “claw type” shifter mechanism, and the old ATAC system was replaced with aluminum cylinders with Honda’s new electronically-controlled RC valves. 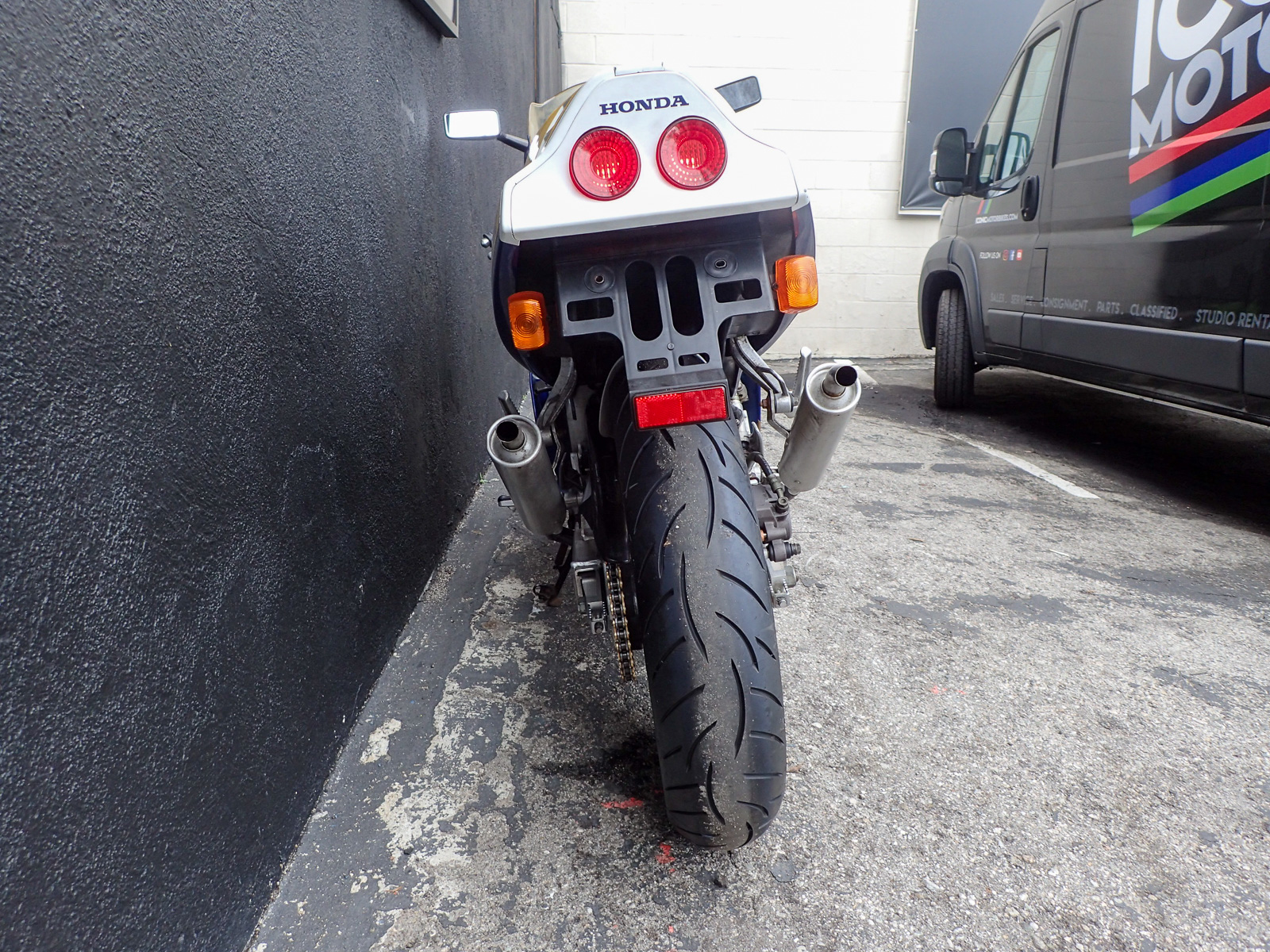 The NSR250R was constructed around a race-bred twin-spar aluminum alloy frame – with matching swing-arm — and looked even more race-ready than the NS, with a fairing and tail section inspired by Honda’s GP250 and GP500. The cockpit had plenty of convenient amenities for the street, while still giving off a track-inspired feel thanks to a predominant round tachometer front and center. Due to Japan’s laws and restrictions, the MC16 boasted the same power figures as the MC11, however the newer model tipped the scales at some 40 lbs (19kgs) less. In unrestricted form, the MC16 was good for as much as 55 hp. In full race trim it put down nearly 70. Not wanting its model to grow long in the tooth, Honda once again set out to overhaul the NSR250R, ordering yet another ground-up redesign for an even sharper, more potent 250. Dubbed the MC18, the new generation NSR debuted in late ’87, continuing to push the envelope and blur the line between road and race machine. The first MC1 (aka the PGM-1) used a redesigned two-stroke 90-degree V-Twin, though it boasted the first digitally-controlled two-stroke carb setup on a production road bike — a feature only bolstered by the RC valve system.

The MC18 also got a revised pentagonal section aluminum alloy frame with a removable subframe, dual drilled floating 276mm discs bit by cast aluminum four-piston Nissin calipers (and a single 220mm disc in back), twin circular taillights, telescopic forks with preload adjustment, Pro-Link rear suspension, and six-arm aluminum alloy Enkei wheels. The MC18’s bodywork also received a minor facelift based on the 1988 season’s NSR500 GP bike. Japanese restrictions meant horsepower was still capped at 45 out of the box, though the MC18’s potential was a lot less hard to unlock. With a few simple modifications, 60hp could easily be achieved. Three months after the initial release of the PGM-1, Honda released the up-specced SP edition NSR. Short for “Sport Production”, the SP was available in a works racer-style Rothmans livery and came from the factory with gold Magtek magnesium rims. 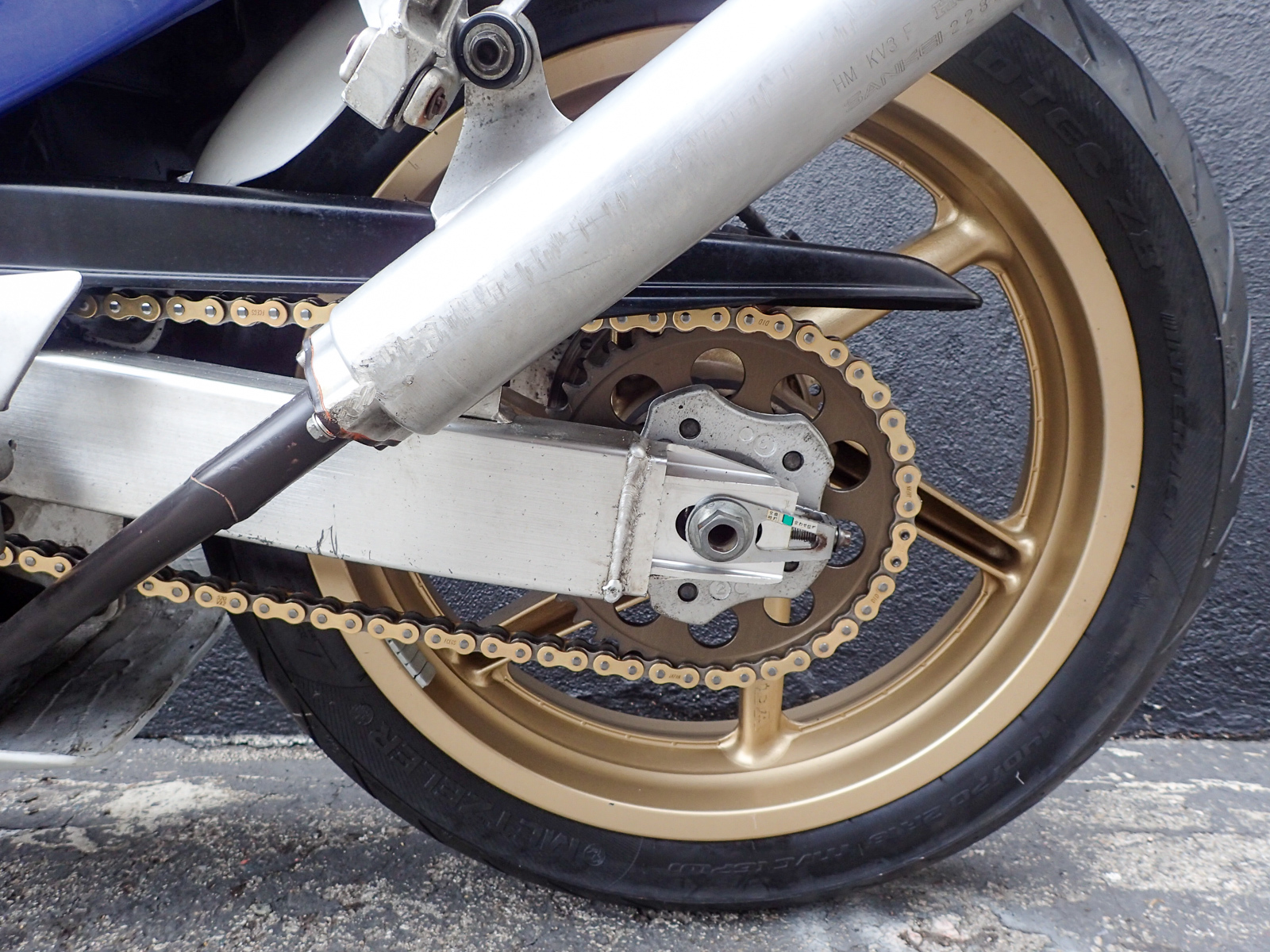 This Rothmans NSR (VIN: MC181009675) shows 24,615 kilometers (15,384 miles) on the odometer, and there are some cosmetic issues noted in the photo album – specifically with scratches on the bodywork and the minor corrosion found on nearly every JDM import – that are to be expected from a machine with such use. We would assume that it has been dropped on both sides at some point in the past, so please take a look at the images.

The owner had us give the bike a $3,344.66 service last year which included a rebuild of both brake master cylinders, carb rebuild, oil change, coolant flush, oil injection tank cleaning, fuel tank cleaning, and plenty of new parts: fork seals, DID 520 chain, EBC sintered pads, battery, tires, spark plugs, speedometer gear drive, and more. A copy of the invoice can be provided to the new owner if desired. 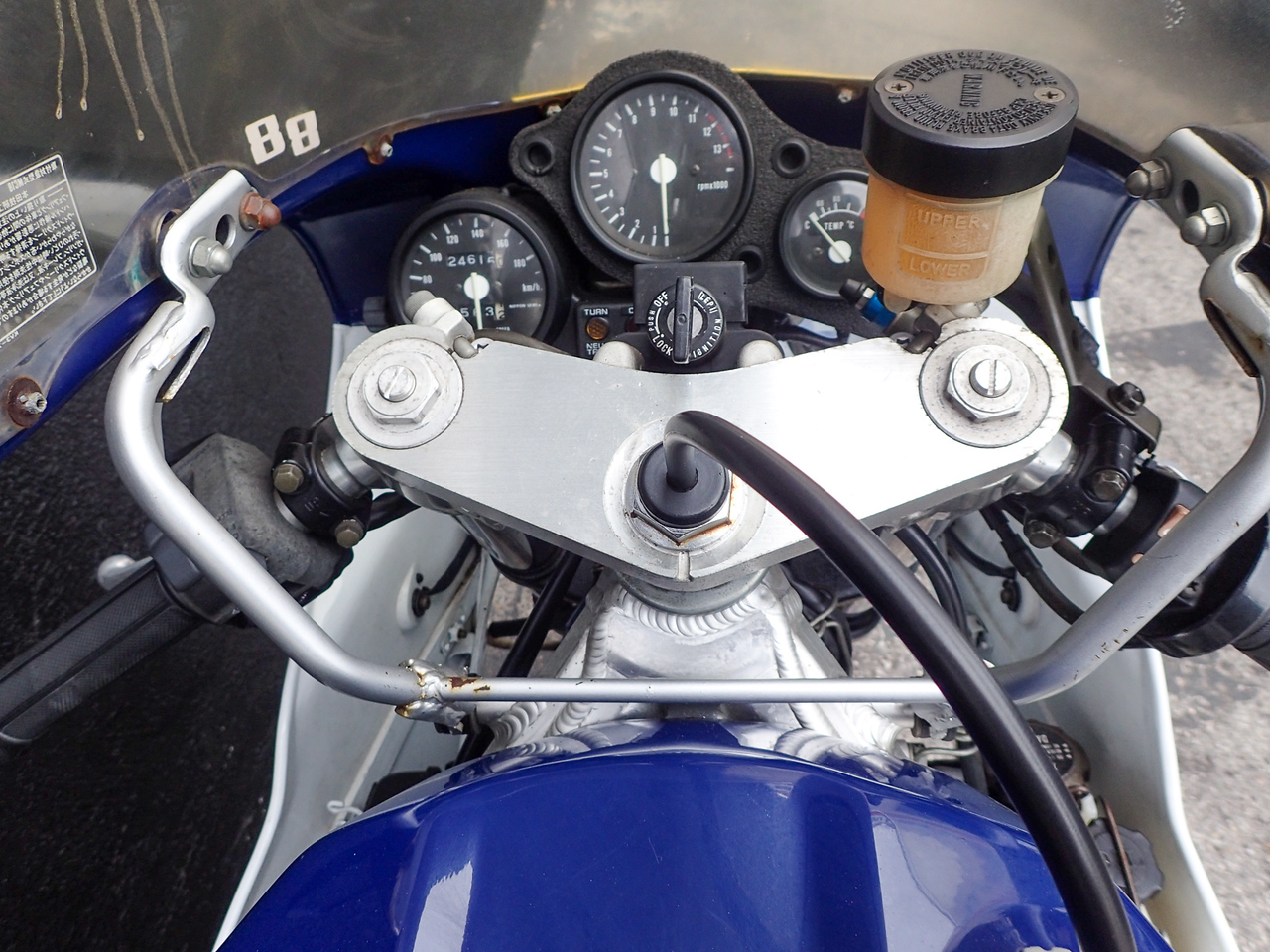 We recently concluded a sold auction for a MC18 in the Terra Racing livery by noting that it “may not be as iconic as the Rothmans Edition SP.” Well, here’s your chance! It is currently located at our Santa Monica location, so please make an appointment if you’d like to come see it in person. 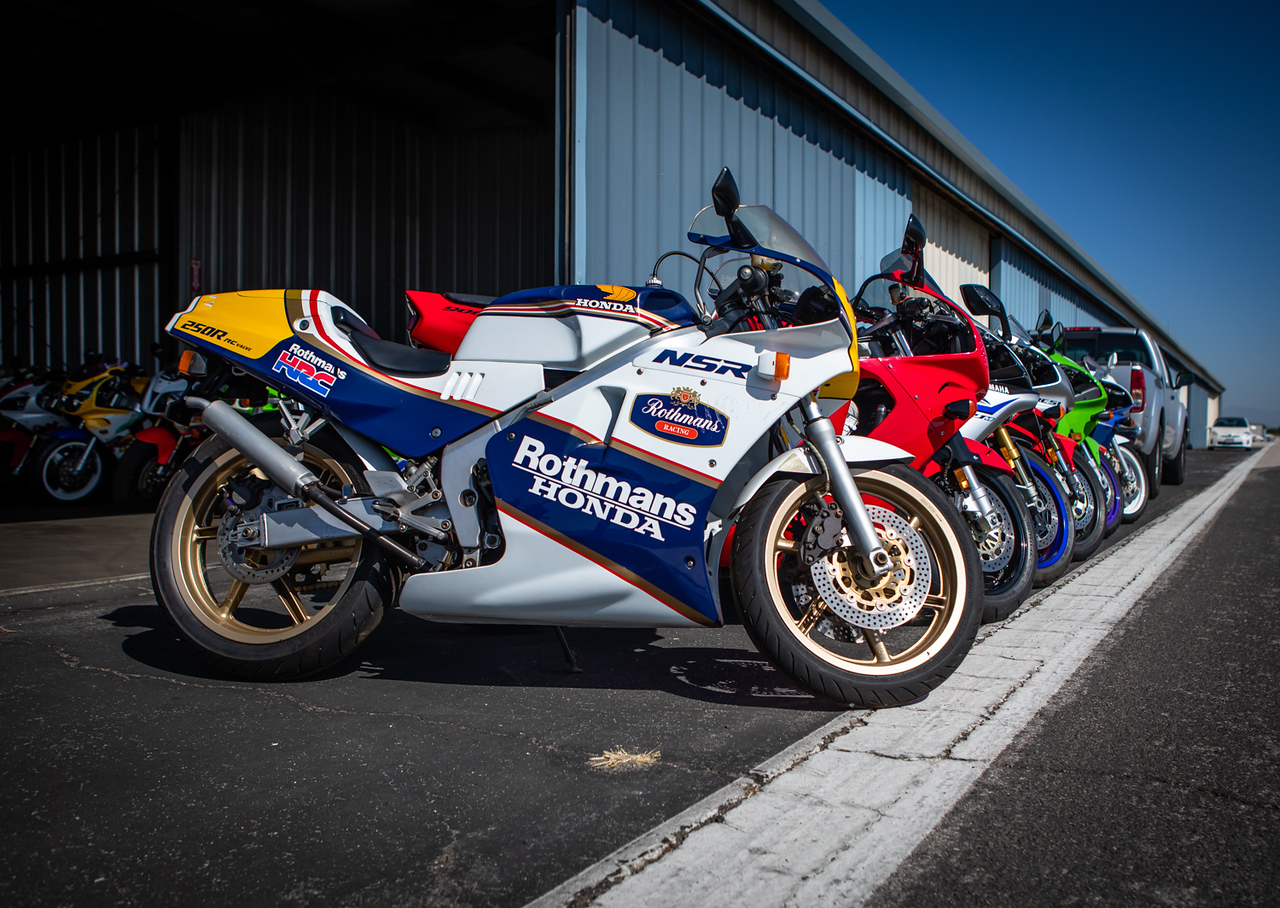