UPDATE: This Honda NSR250SP MC18 Terra Racing was originally listed with a Bill of Sale, which is incorrect. We apologize for the inconvenience. It is currently titled in Arizona.

Additional photos of this NSR250SP are available here for your perusal.

In the mid-to-late 1980s, the small-displacement race replica market in Japan was booming. Legions of bright-eyed young riders were lining up to fork over their hard-earned yen for competition-derived road-legal runners like Yamaha’s TZR250, Kawasaki’s KR-1, and Suzuki’s RGV250. Manufacturers on the island were battling it out on the race track and in showrooms in an ongoing arms race to produce the most trick race bike for the streets.

Despite their relatively small displacement, these models increasingly featured cutting edge components and technologies previously reserved for Grand Prix machines and the like. As each company sought to gain an edge, these quarter-liter models evolved at a rapid pace, with new generations being introduced every couple of years.

In 1985, Honda launched the NS250R MC11, laying the foundation for its line of quarter-liter oil-burners that followed. The NS featured a box-section aluminum frame and swingarm, disc brakes, full GP-style bodywork inspired by Honda’s RS250R factory race bike, Honda’s Astralight rims, and a liquid-cooled, 249cc, 90-degree V-Twin engine, two-stroke engine that made 45 hp (at 9,500rpm) and utilized the ATAC (automatically-controlled torque amplification chamber) power-valve system, one of the few successful aspects from a rare Honda failure, the MVX250F.

The NS was well-received, but it was up against some fierce competition. So Honda quickly went back to the drawing board, calling on its 500 and 250cc GP championship-winning race division to help deliver a major step forward from the MC11. In late 1986, Honda unveiled an all-new model; the NSR250R MC16. Aside from using its predecessor’s “Nikasil” (nickel-silicone carbide) coated cylinders, the MC16 was an entirely new model, not sharing any components with the outgoing model. 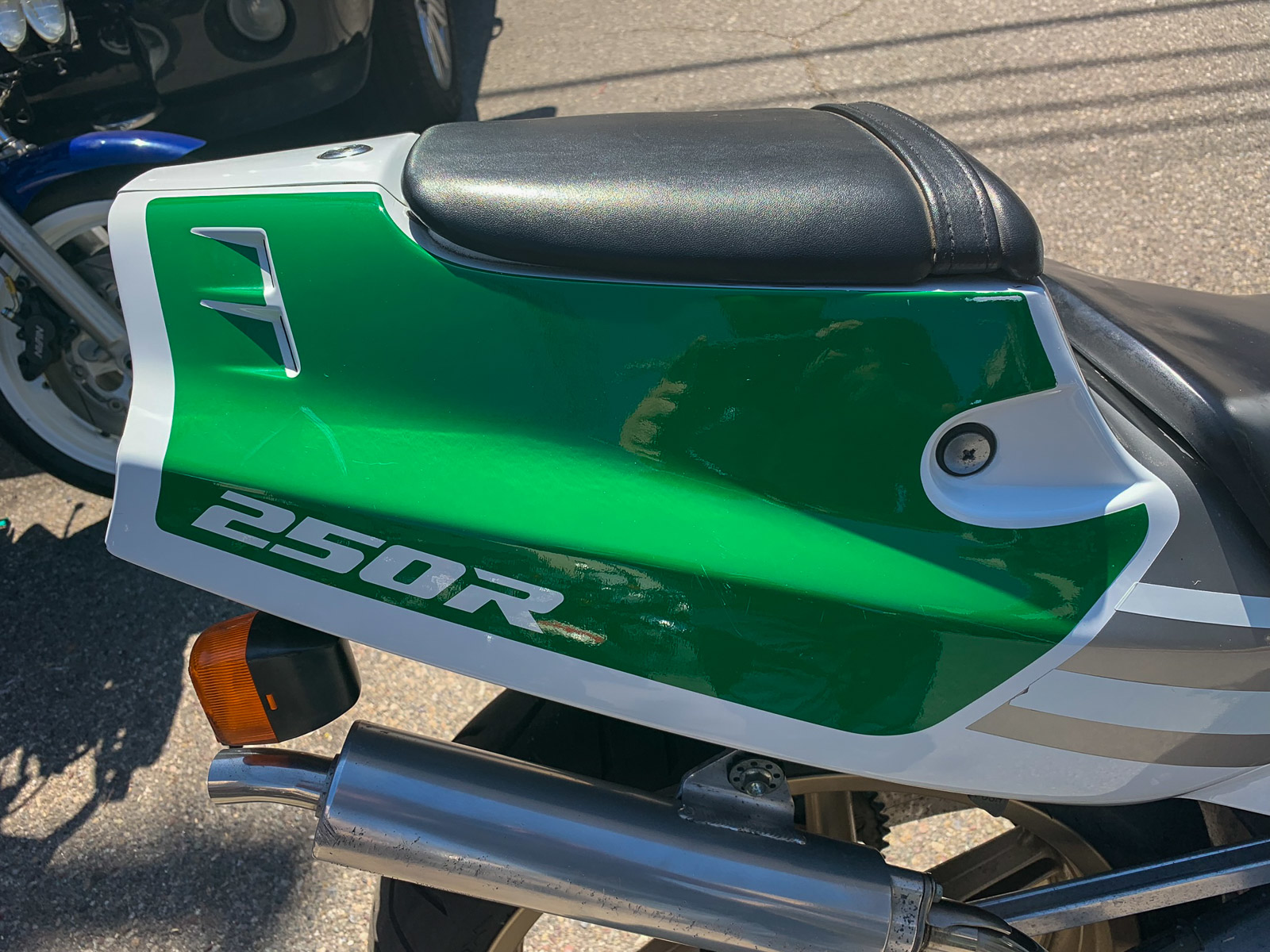 At the heart of the NSR MC16 was a new-from-the-ground-up, liquid cooled, two-stroke, 249cc, 90-degree V-Twin — which could be traced back to the MVX250 — with a new extremely compact patented intake system. The engine cases were modeled after those on the 1987 RS250R works racer with a new race-style cassette-type transition with an integrated oil pump and “claw type” shifter mechanism, and the old ATAC system was replaced with aluminum cylinders with Honda’s new electronically-controlled RC (revolutionary controlled) valves.

The NSR250R was constructed around a race-bred twin-spar aluminum alloy frame – with matching swing-arm — and looked even more race-ready than the NS, with a fairing and tail section inspired by Honda’s GP250 and GP500. The cockpit had plenty of convenient amenities for the street, while still giving off a track-inspired feel thanks to a predominant round tachometer front and center. 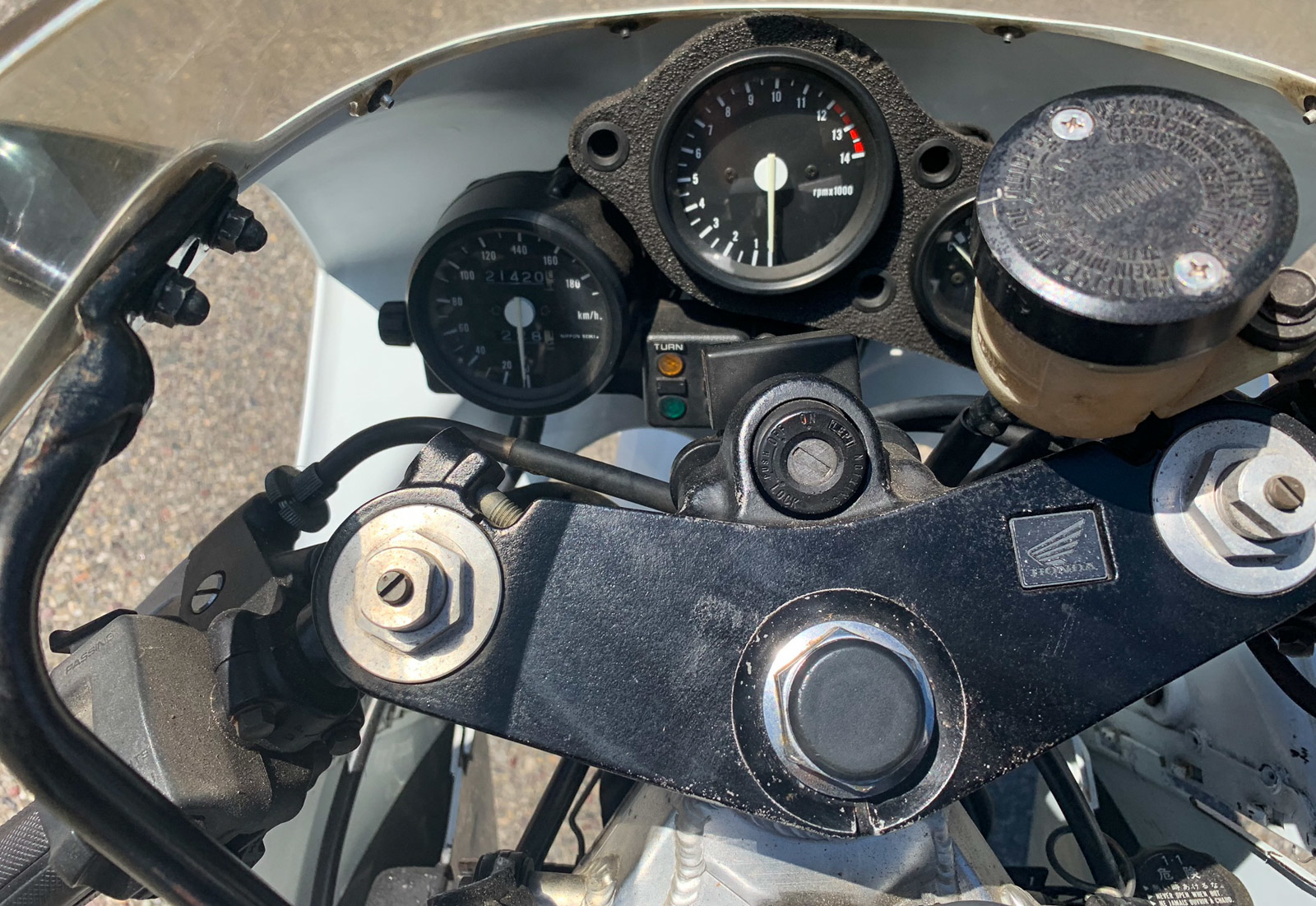 Due to Japan’s laws and restrictions, the MC16 boasted the same power figures as the MC11, however the newer model tipped the scales at some 40 lbs (19kgs) less. In unrestricted form, the MC16 was good for as much as 55 hp. In full race trim it put down nearly 70. Not wanting its model to grow long in the tooth, Honda once again set out to overhaul the NSR250R, ordering yet another ground-up redesign for an even sharper, more potent 250. Dubbed the MC18, the new generation NSR debuted in late ’87, continuing to push the envelope and blur the line between road and race machine. The first MC1 (aka the PGM-1) used a redesigned two-stroke 90-degree V-Twin, though it boasted the first digitally-controlled two-stroke carbsetup on a production road bike — a feature only bolstered by the RC valve system. 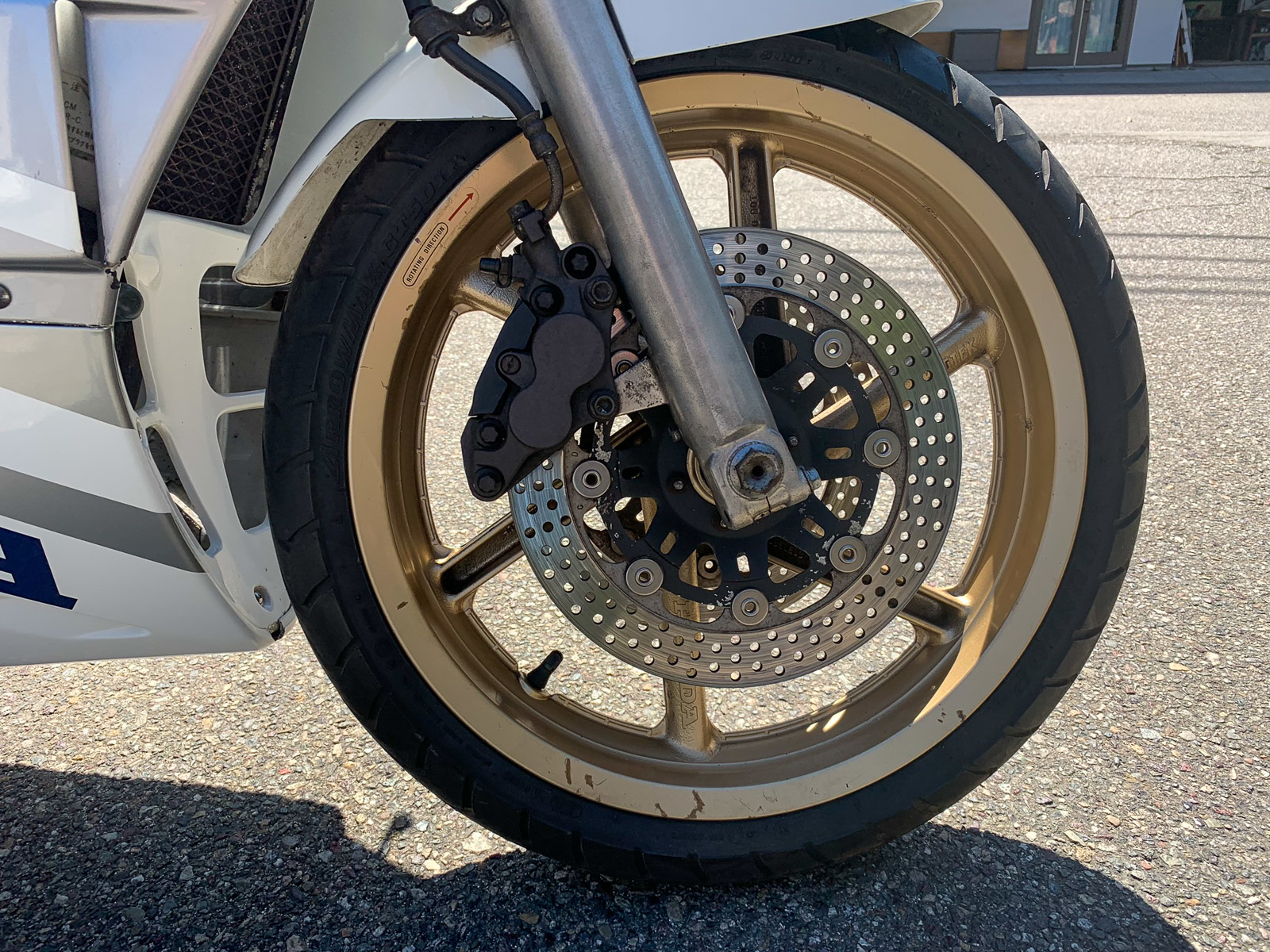 Japanese restrictions meant horsepower was still capped at 45 out of the box, though the MC18’s potential was a lot less hard to unlock. With a few simple modifications, 60hp could easily be achieved. Three months after the initial release of the PGM-1, Honda released the up-specced SP edition NSR. Short for “Sport Production”, the SP was available in a 500cc works racer-style Rothmans livery and came from the factory with gold Magtek magnesium rims. Other than that, the first SP-spec was identical to the base model.

In late 1988, Honda revamped the NSR250R, debuting the MC18 (PGM-II). The second MC18 hugely benefited from the RS250’s exact same PGM-II ignition unit (albeit the NSR’s was mapped to be a more reliable road-goer). The RC Valve timing also underwent a rework in conjunction with the “new generation” ignition, the swing-arm was updated, a new stainless exhaust was added, and even sleeker bodywork with a reworked tail section and new belly-pan was introduced, offering an even better drag coefficient. 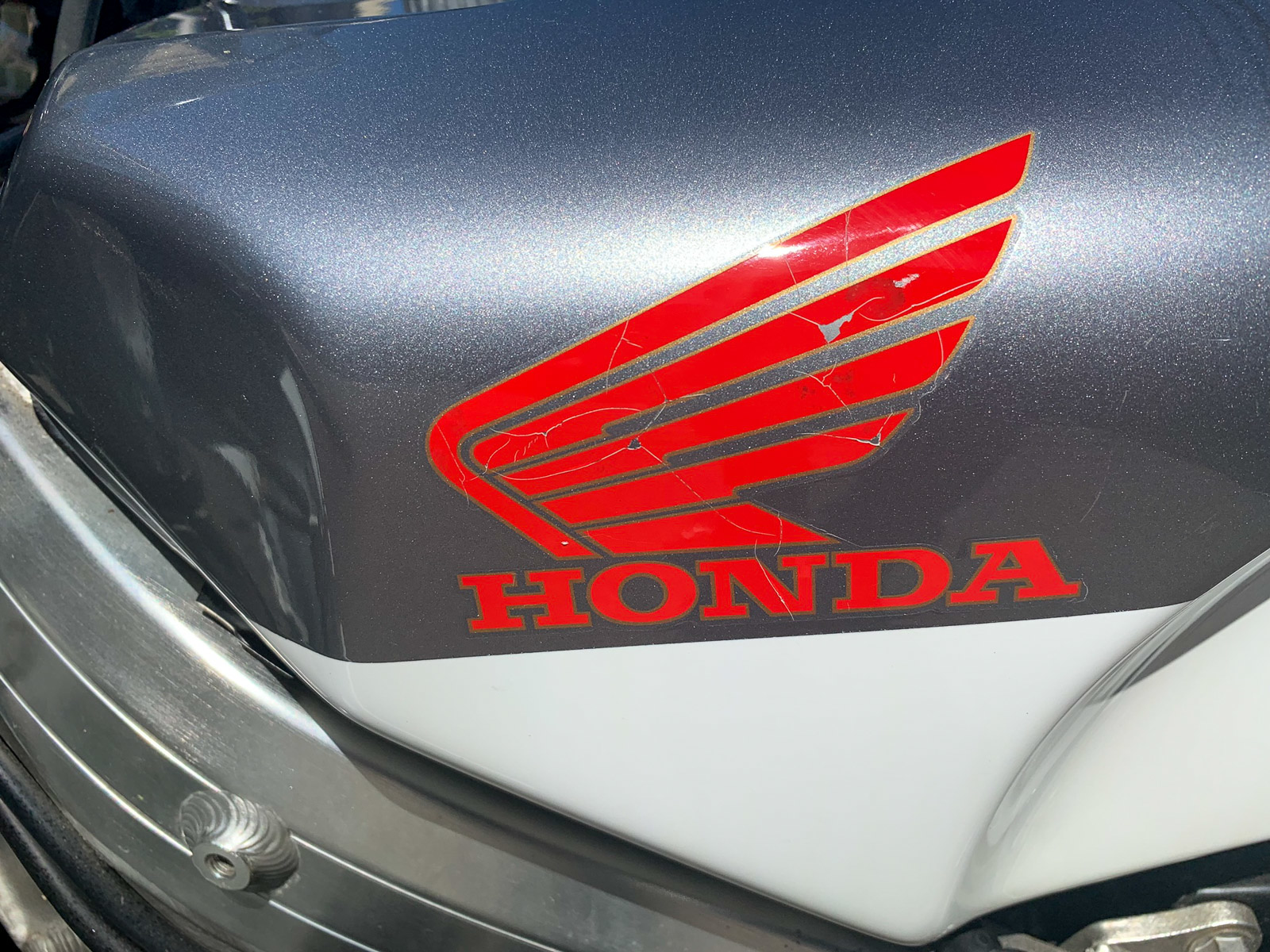 A few months later, Honda delivered what is widely considered to be the first “true SP” model with the R6K. Like the original SP, the second version got Magtek magnesium wheels and a race-replica livery, though this time based on the Terra Racing bikes (the only livery the limited edition R6K was offered in). Unlike the first SP, the R6K was truly worthy of the “Sport Production” moniker, offering far more suspension adjustability, and a slipper clutch derived from Honda’s 250cc GP racers. In race trim, the R6K could generate a cool 70 hp. With a weight of only 286 lbs, these two-stroke twins were rockets on wheels. 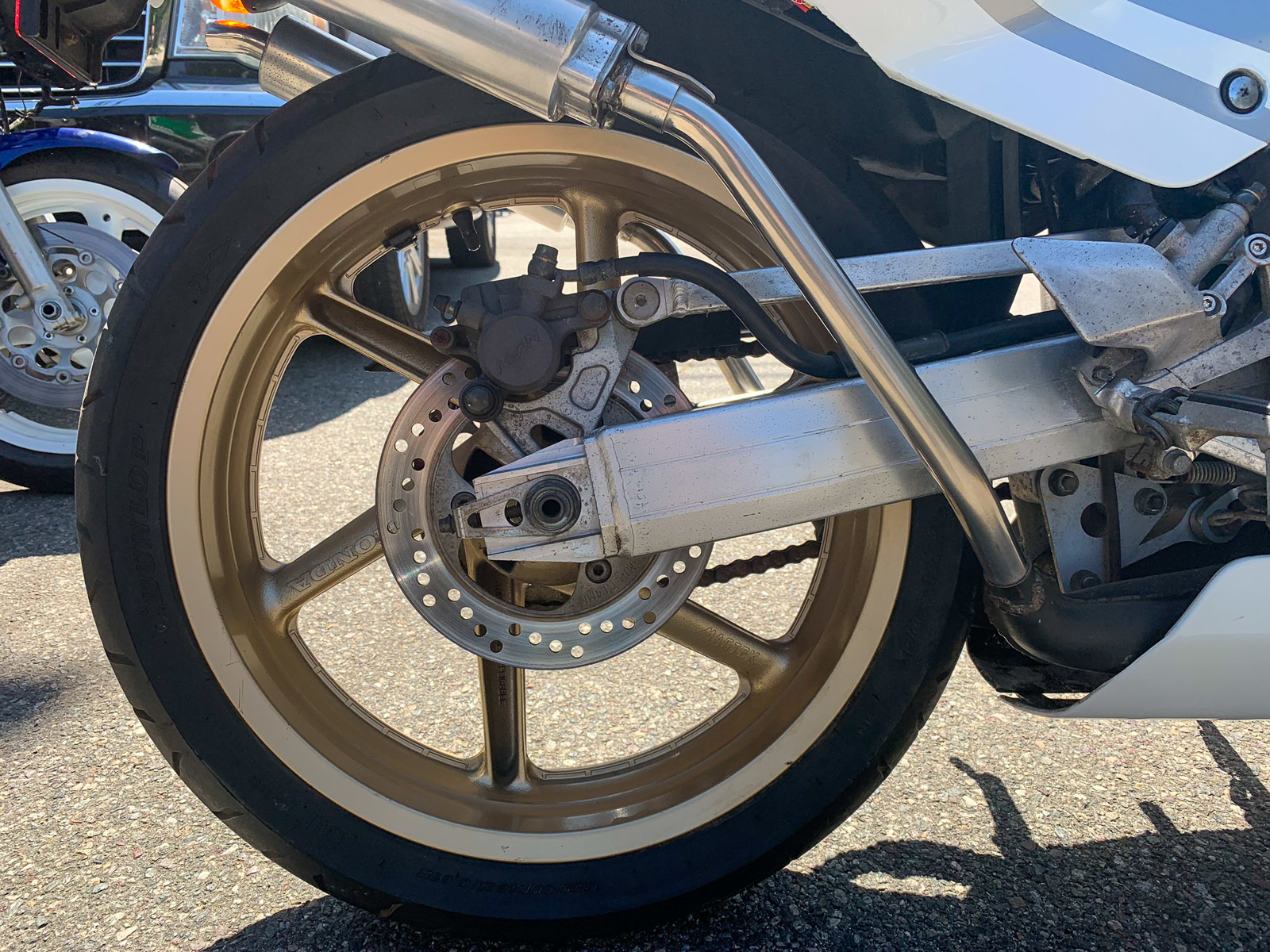 The NSR250R did well in showrooms, at least partially thanks to Honda’s streak of successes in 1980’s GP racing. From ’83 through ’89, Honda won more than half of the 500cc world titles and four 250cc titles in ’85, ’87, ’88, and ’89. And while the NSR250 was incredibly successful, very few R6K units were ever produced, making them exceedingly rare — a fact that’s amplified tenfold in the US. If you feel like going back in time a few decades, you can check out this footage from a 1987 250CC Grand Prix race featuring a pair of Terra Racing Hondas:

This particular bone stock 1988 Terra Racing Edition NSR250SP MC18 has never been restored and has a little over 13,000 original miles on the clock. This rare specimen isn’t without its flaws, which include some damage to the fairing (some of the tabs are broken on the right side), a few nicks on the tank, a scuffed muffler, and a bit of corrosion on the fork legs – they don’t leak and the sliders are a-okay. The paint is in pretty great shape too, especially the fairing, nose, and tail, where it really matters the most.

We currently has a set of original Hello Kitty race bodywork in stock that fits this SP model (available at additional price to the auction winner), which would allow you to track the bike worry-free. These are incredibly seldom seen bikes in the states, and surprisingly this example can be registered for road use (not in California though). If you do live in the Golden State, this NSR still makes a stellar track day toy or display piece. 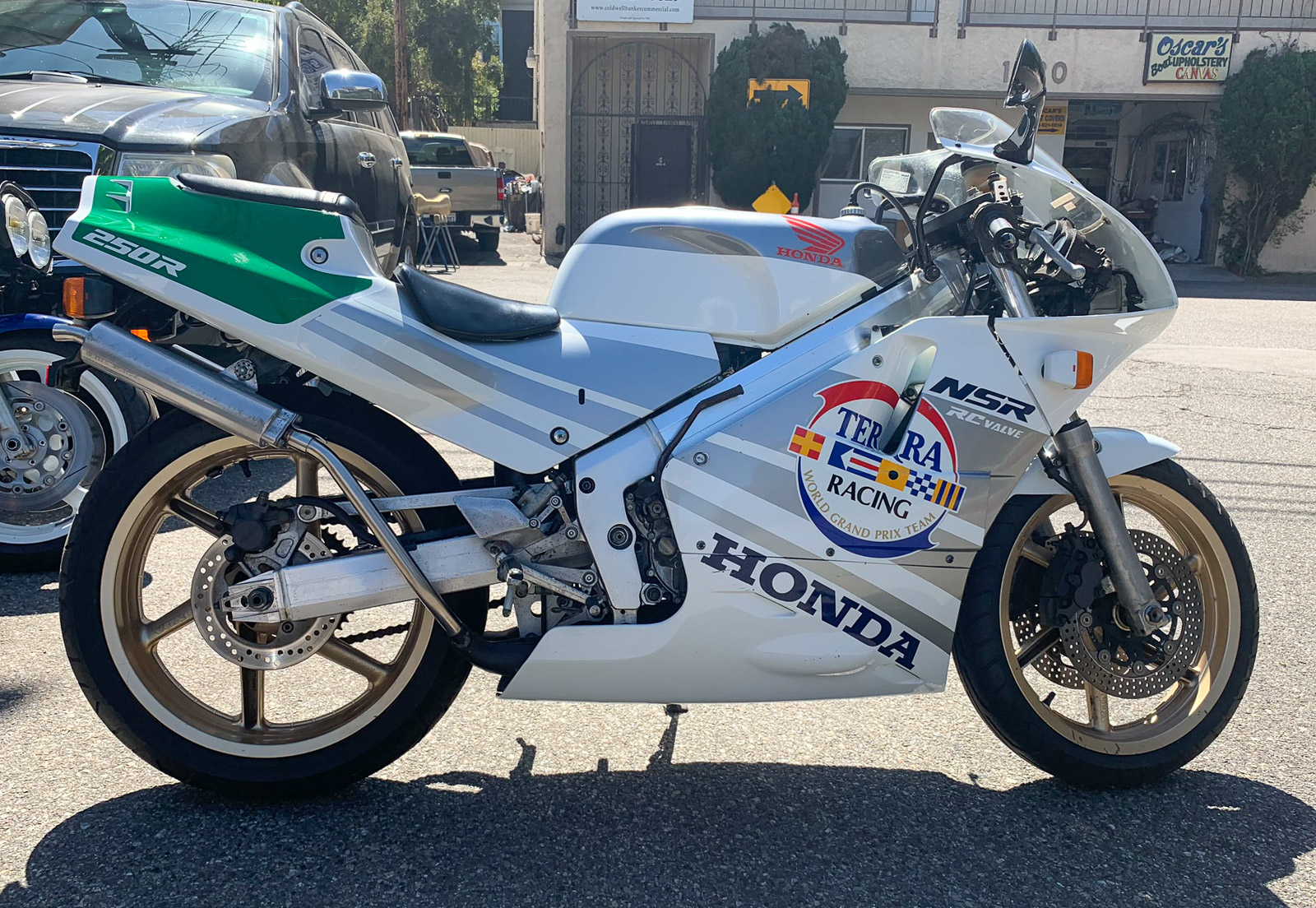 It may not be as iconic as the Rothman’s Edition SP, however with fully adjustable suspension fore and aft, a factory slipper clutch, PGM-II ignition, and magnesium rims, all dressed up in that wonderful white, silver, and green Terra Racing livery, the NSR250SP MC18 R6K is undoubtedly the one to have.