Click here for an CycleVIN Motorcycle History Report on this 1988 Suzuki GSX-R1100. Additional photos are available here for your perusal.

It was an instant classic – an aluminum box frame housed a 128 horsepower oil-cooled engine, and it looked the part thanks to the full bodywork. The dry weight was 433 pounds, an impressively low number for the time. 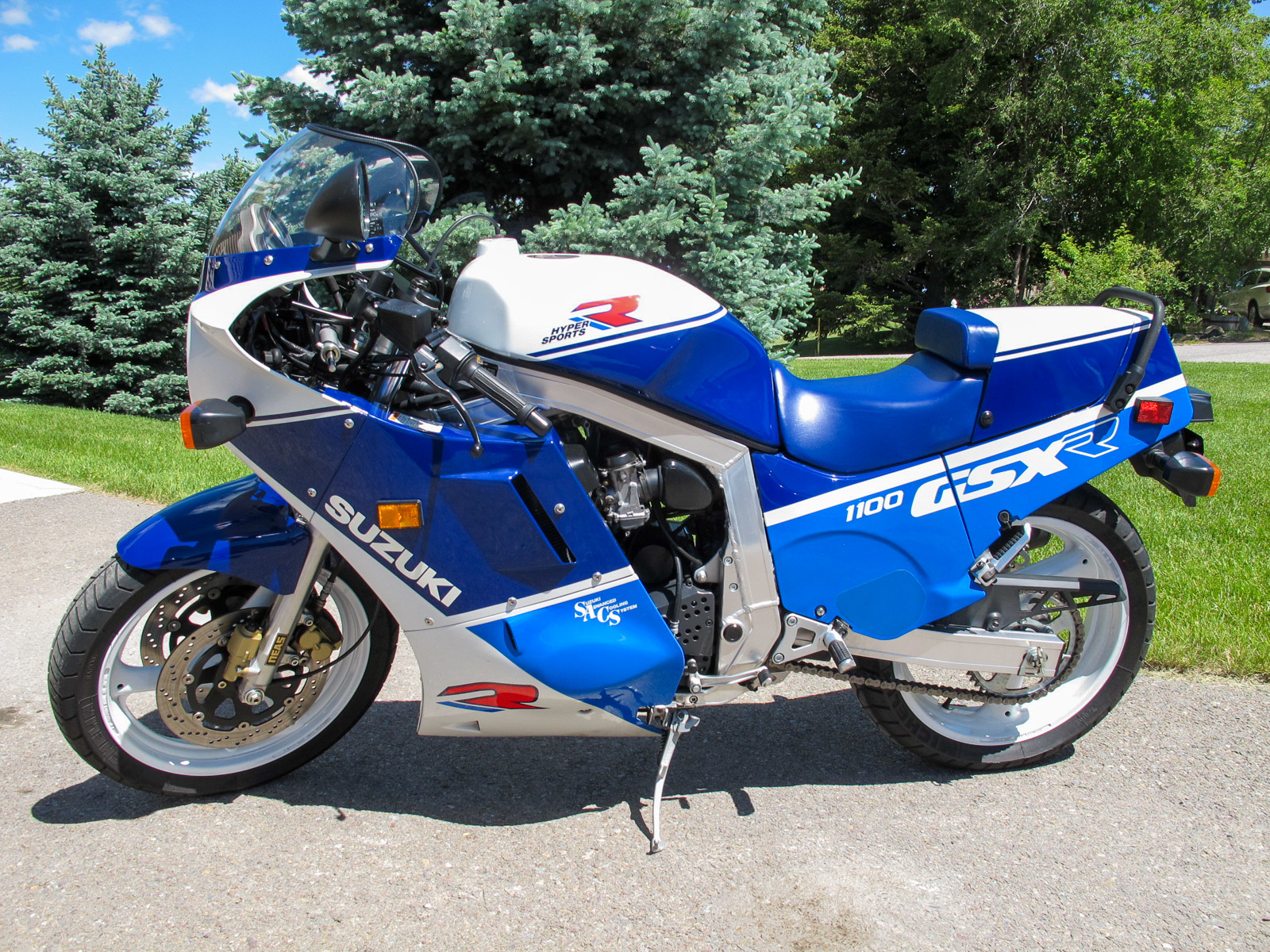 The seller is the original owner – he purchased it new from Yamaha Suzuki Motorsports in Loveland, Colorado. “I was at the dealership when they rolled it out on the showroom floor and I put a deposit down on it right then. I’m the original owner. The bike was in Greeley, Colorado all of it’s life until 1996, at which time it moved with me to Richland, Washington. In 2012, it moved with me once again to Kalispell, Montana where it is presently located. The motorcycle has always been garaged and/or covered when parked outside.”

“I’ve put on all 11,671 miles with the exception of my father and brother each taking it for a short ride after it was broken in. The bike was ridden regularly back and forth to work while in Colorado in the summer time. It also made several trips into the Colorado Rocky Mountains. Very few miles were put on it after 1996 due to a personal injury. But it has always been started regularly and allowed to warm up and ridden a few miles each year just to keep the seals lubricated and prevent leaks.”

“I’m selling it mostly because I’m no longer able to ride it due to a neck injury. I’m 6’3″ and the riding position is not good for me since the injury. It’s time for it to go to someone who will either ride it and enjoy it or to a collector or dealer who appreciates it and maybe wants to display it. I’ve had several people want to buy it over the years, but I’ve never considered selling it until now. I’ve owned numerous other motorcycles and have ridden all of my life. I presently have two other bikes in addition to the GSX-R.”

Cosmetic Blemishes:
“The motorcycle has never been wrecked, however it was blown over in a bad wind storm in Colorado while it was at my job location. It was covered and the cover came partially off but hung up on a handlebar. The cover acted like a sail and pulled the bike over. A co-worker was nearby and saw it happen and immediately picked the bike up. It did suffer some minor damage to stainless steel muffler heat guard and also a small scuff on the front lower fairing. I thought about placing a decal of some type over the scuff, but opted to keep it as is.

There are also a couple small cracks in the right rear side panel. I’m assuming this is due to age and vibration. I removed the panel and placed clear Gorilla tape on the back side to prevent the crack from expanding.” 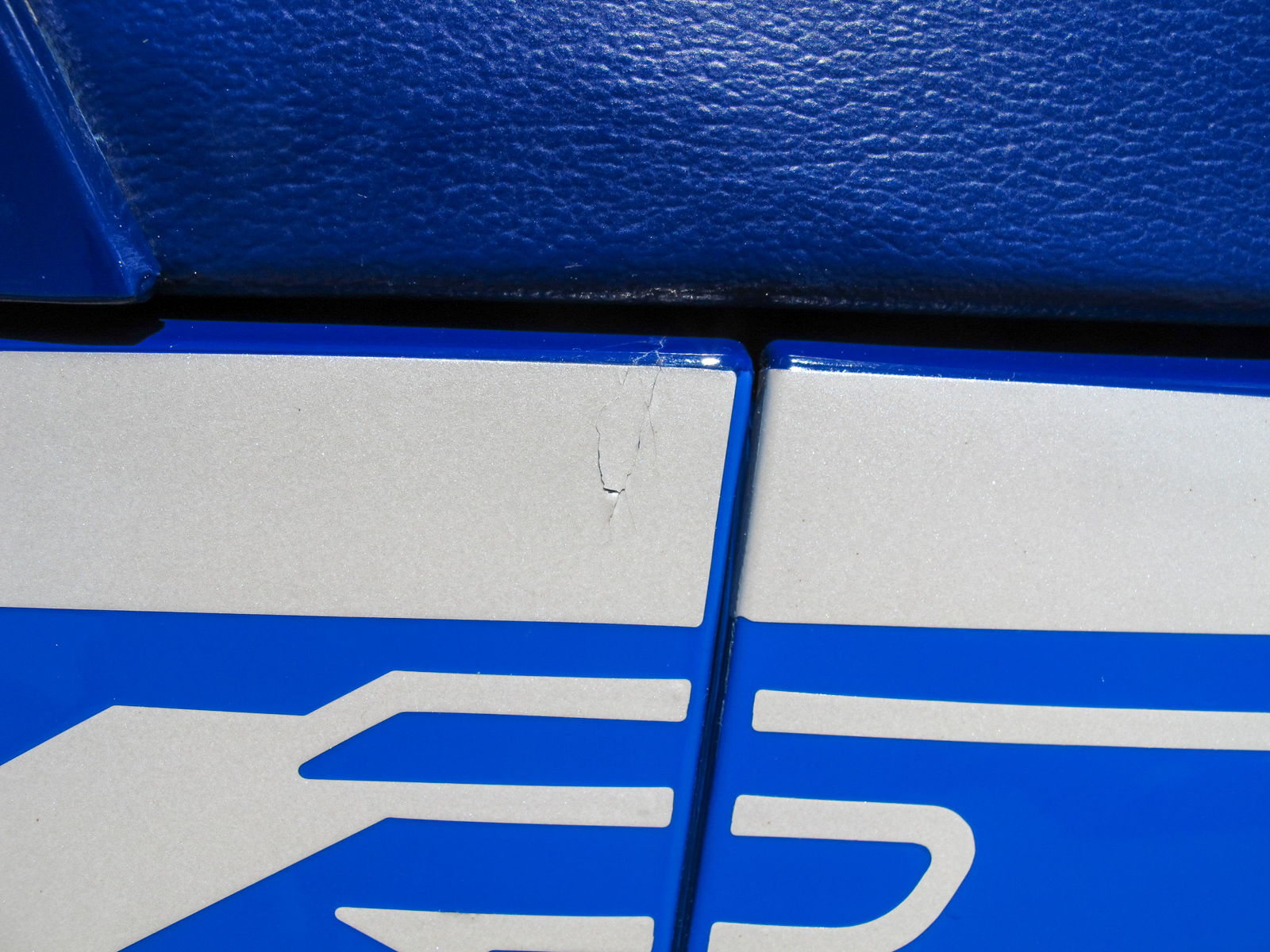 Maintenance History:
“The bike was taken back to the dealership where it was purchased for the initial 600 mile oil/filter change, valve adjustment, and check. Then routine oil/filter changes every year. It never had enough miles put on it in a single year to require more than one oil change per year. I don’t remember what oil was put in it during the 600 mile check, but I ran Bel-Ray 20-50W in it until 1996 at which time it wasn’t ridden often. I then started using Honda HP4 20-50W synthetic blend. The motorcycle has had at least 5 times the number of oil changes that would have been required for the mileage that’s on it. It’s been changed at least every two years even when it’s only ridden 20 miles a year since about 1997. I worked as a mechanic for many years.”

“The original oil cooler developed a pin-hole leak in 1995. Further investigation revealed this was due to a small casting flaw in the cooler. I purchased a new Suzuki OEM cooler from a Suzuki dealership and installed it. I have the receipt for the new cooler. I did adjust the valve clearances one other time, don’t recall the exact mileage.”

“At some point, one of the passenger grab-rail bolts came loose and fell out. Not sure when it happened, I didn’t notice it missing until the bike was in Montana. I ordered a new bolt from my local Suzuki dealer but when it arrived, it was too short. The dealership informed me it was the only bolt listed. I purchased a bolt from a local fastener shop and replaced it. The new bolt was not black so, I colored the head with a Sharpie.”

“I also had to replace one of the side panel bracket bolts located under the seat. The original bolt was a phillips-head machine screw with a pan-head. It would not come out, even when using an impact screwdriver. The bolt head had to be cut off to remove the side panel and I replaced it with an allen-head machine screw and flat washer. The original bolt was not available from the Suzuki dealer. Other than one set of tires and a new battery, the bike is 100% stock with the exception of the two bolts. I’m sure the bolts cold be easily obtained should a collector wish to make the bike 100% stock again.”

“NOTE: I knew the mechanic at the local Suzuki dealership where the bike was purchased and the initial 600 mile check was performed. After performing the 600 mile oil change, valve adjustment, and checks, the mechanic called me and asked if he could take it for a short ride. I said yes, he also raced for the dealership. When I picked it up he told me it was the strongest running 1100 he’d ever ridden and that I did a good job breaking it in.”

“The bike is started regularly, at least every couple of months. Only a small amount of gasoline is ever in it and fresh added when it’s stared. I allow the engine to warm up and then ride it around the neighborhood a little before parking it again. NOTE: The Michelin tires that are on the bike have a lot of tread left, but I wouldn’t do any hard cornering or high speed riding on them as they are several years old. I’m sure they are getting harder.” 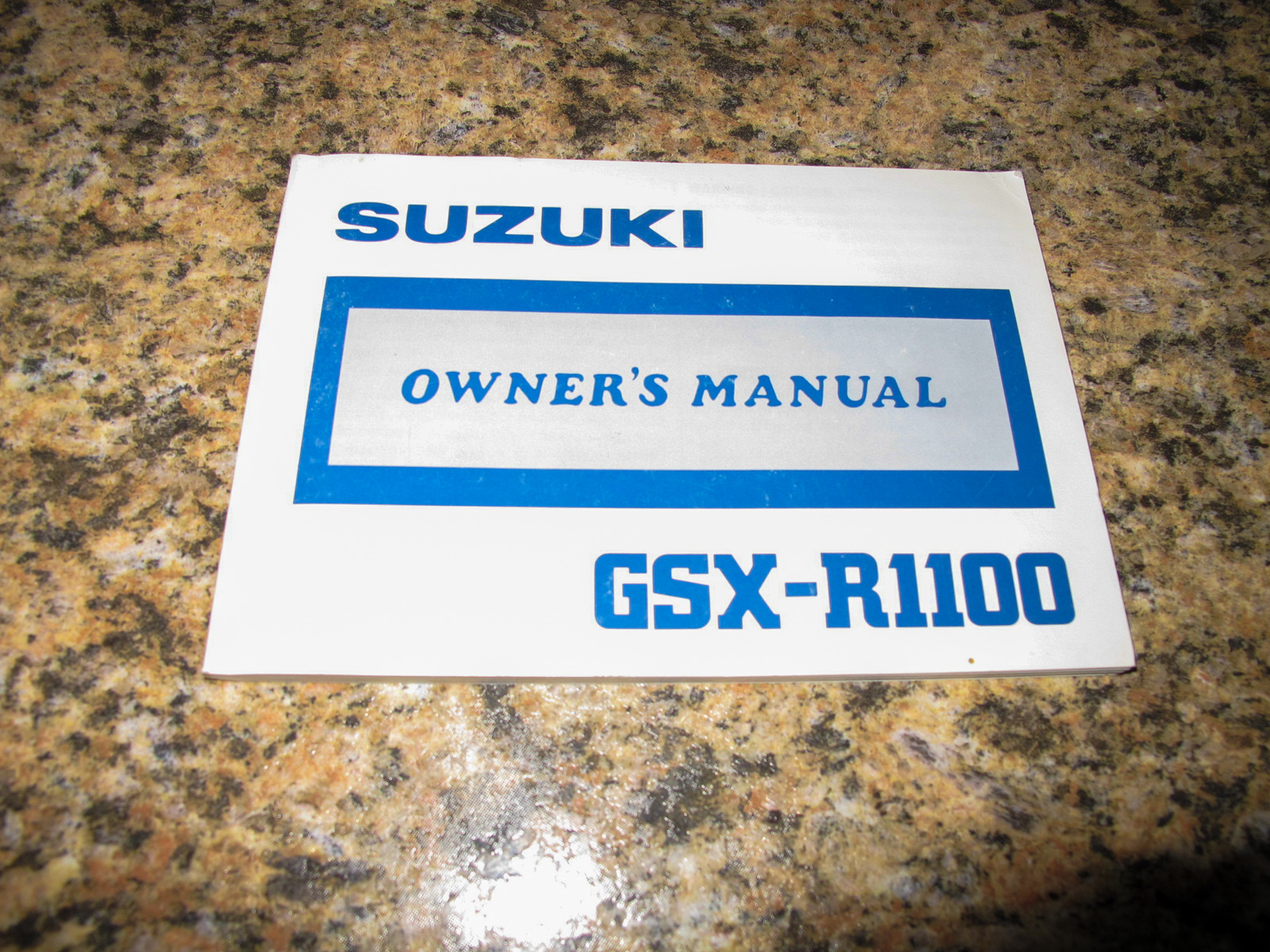 Currently located in Kalispell, Montana, this Suzuki is offered on a clean Montana title. Have any GSX-R1100 stories or questions about this listing? Let us know in the comments!