Click here for an CycleVIN Motorcycle History Report on this 1990 Honda RC30. Additional photos are available here for your perusal.

When the new World Superbike Championship was introduced in 1988, Honda had an issue as its highly successful custom-built RVF750 factory endurance racer (not the RC45) wouldn’t be eligible to compete. So they set out to create a new top-shelf, street-legal, limited edition race bike, producing the minimum number of units required to satisfy homologation rules. Knowing it would only have to turn out a relatively small batch of machines, Soichiro Honda wanted to use the new model to demonstrate what its factory race department was capable of. The result was a no-expense-spared race-grade legend brimming with features previously reserved for track-only machinery. Japan called it the VFR750R, but the bike we fell in love with in America was named the RC30.

At the heart of the RC30 was a liquid-cooled, 748cc, 90-degree V4 engine with four valves per cylinder, gear-driven double-overhead cams, titanium connecting rods, forged two-ring pistons, an 11.0:1 compression ratio, and a “big bang” firing order. Paired with a six-speed transmission with a trick slipper clutch, the sophisticated V4 made 118 hp at 11,000 rpm and 55 ft-lbs of torque at 9,800rpm (unrestricted). The VFR750R had a best-in-class dry weight of 396 lbs and a wet weight of 488 lbs, which was almost 10 lbs less than the game-changing Suzuki GSX-R750. The VFR had a top speed of over 150mph, and thanks to an incredibly high gear ratio, could break 80 mph in first gear. The RC30 got fully-adjustable Showa suspension fore and aft — 43mm telescopic forks up front and a mono-shock out back. 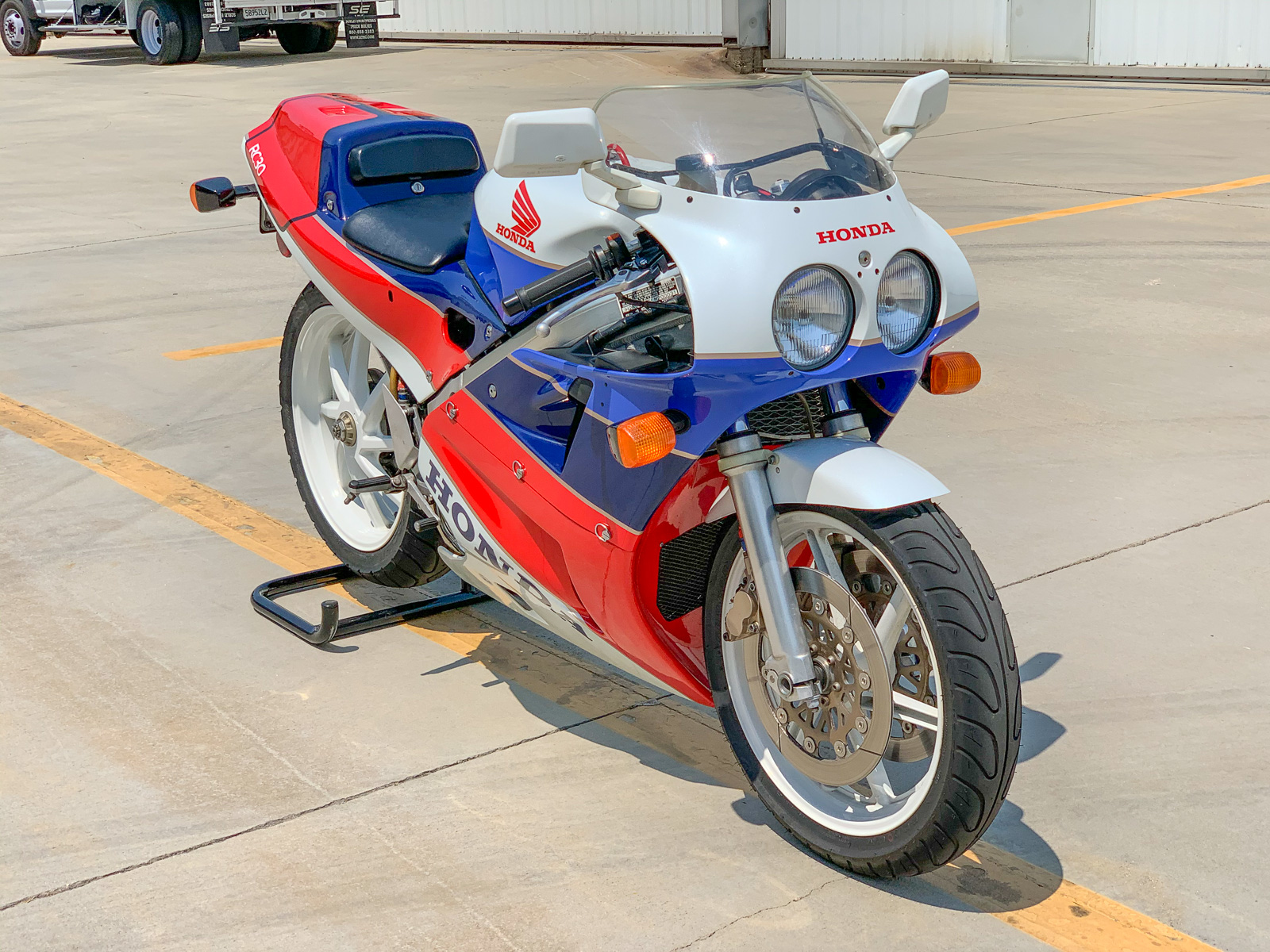 In total, only 316 RC30s were sold in the US. The VFR750R (the name given to this bike in other markets) was first released in 1987, though only in Honda’s native Japanese market. The model wouldn’t be offered in America until 1990 — the only year it was officially sold on US shores — despite it being released to Europe and most of the other global markets in ’88. Different markets received different spec RC30s, with some versions getting a little less power. One way in which the American model differed was a red Honda wing in the tank, as opposed to the yellow found in other markets. 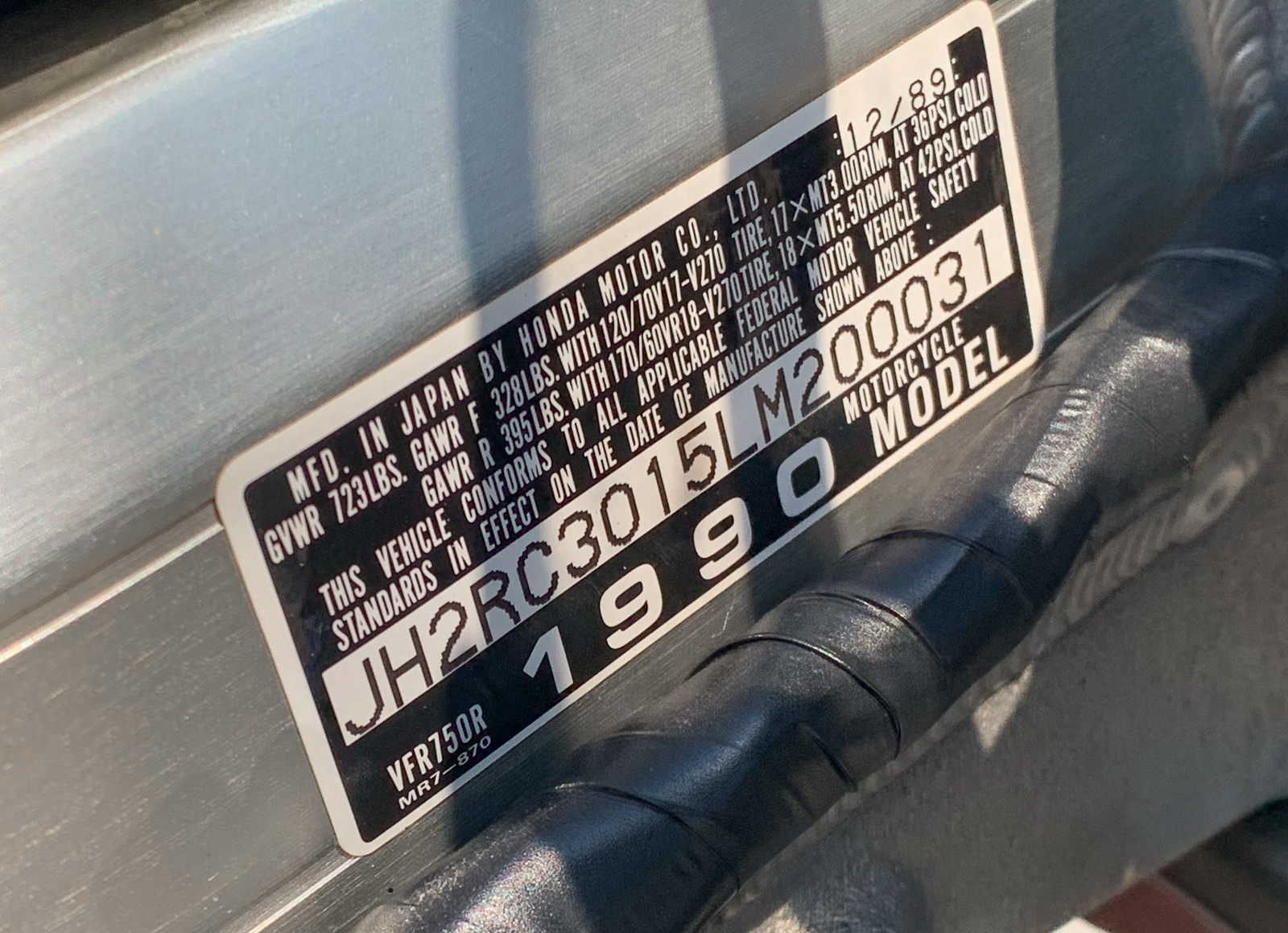 It was purchased new in March of 1990 at Champion Motorcycles in Costa Mesa, California. The original out the door sales price was $17,732.06.

Per the CycleVIN report up top, it appears to have been with the original owner until 2009 and with the second owner until January of 2020, when it was sold to the current owner, an executive at Audi USA. It has always been registered in California. The owner has opted to sell as he needs something a little more comfortable and is using the funds to help cover a vacation home that he just picked up.

As soon as the owner acquired the bike in early 2020, he turned it over to Jim Grainger, a well-known RC30 tuner/painter and overall great guy. Jim went through the entire bike: jetted it correctly, adjusted the valves, and flushed the fluids/tank. Steve the Professor (our head wrench) rode it on a ride to the Rock Store, Adam took it for a spin, and Abhi’s tried it as well. Each one of us marvel over how well it runs. The seller briefly spoke with Jim as to why that’s the case, and he said that the ‘California model makes for a better rider than the 49-state model once you pull the smog equipment off as go with the larger jets as the milder valve springs and cam duration is a better fit for road use.’ We have to agree, as it runs better than any RC30 we’ve ever tried – we’ve sold 20 of these and tried several more, including some with HRC parts. This RC30 has no flat spots, it’s great off the line, and it pulls the entire time. Jim did great work with this bike!

We note that there is a slight bit of seepage on the fork seals, so we’re servicing the forks as we speak and they will be ready to go before the auction ends.

This RC30 also features a Ladybird titanium exhaust – you can watch the video up top to hear it idle and rev a few times or check out this video where we have a quick “sound off” with the Ladybird, a HRC exhaust, and a custom Titanium exhaust. Let us know which was your favorite in the comments below! 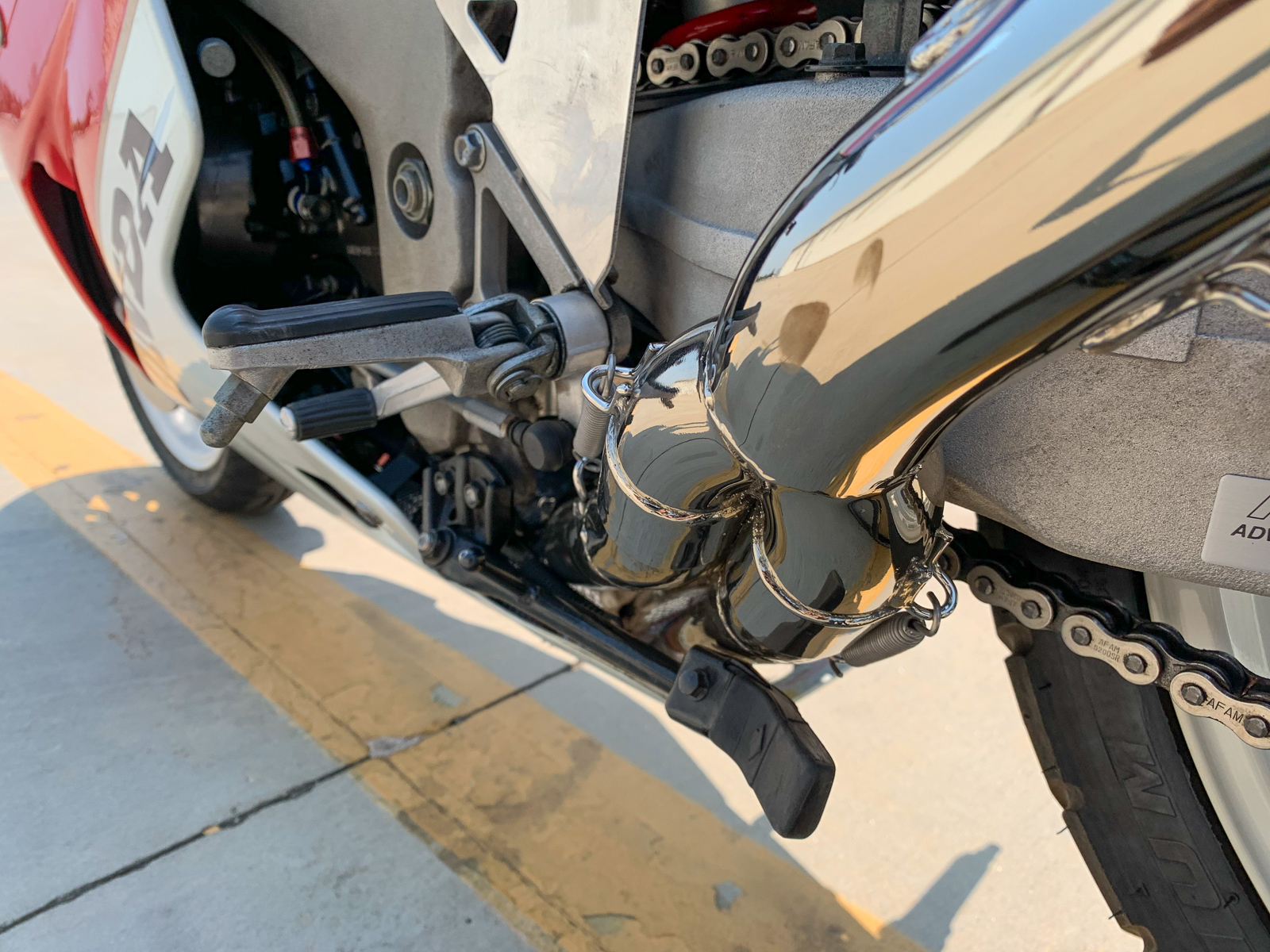 The headers hang low to clear a deep sump oil pan, and the bellypan has been trimmed slightly to make room for the exhaust.

We note one cosmetic issue – some discoloration on the top of the fuel tank. 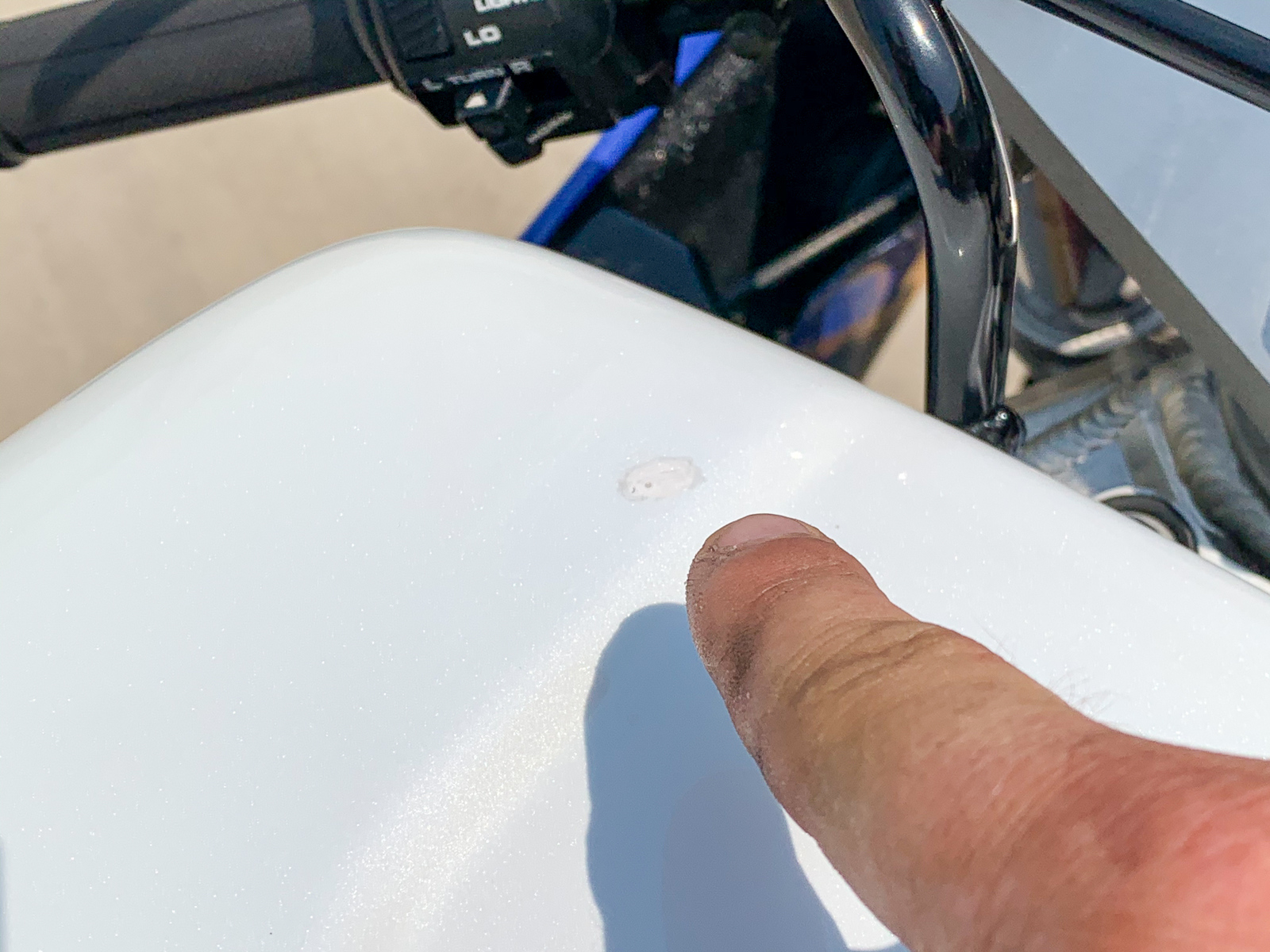 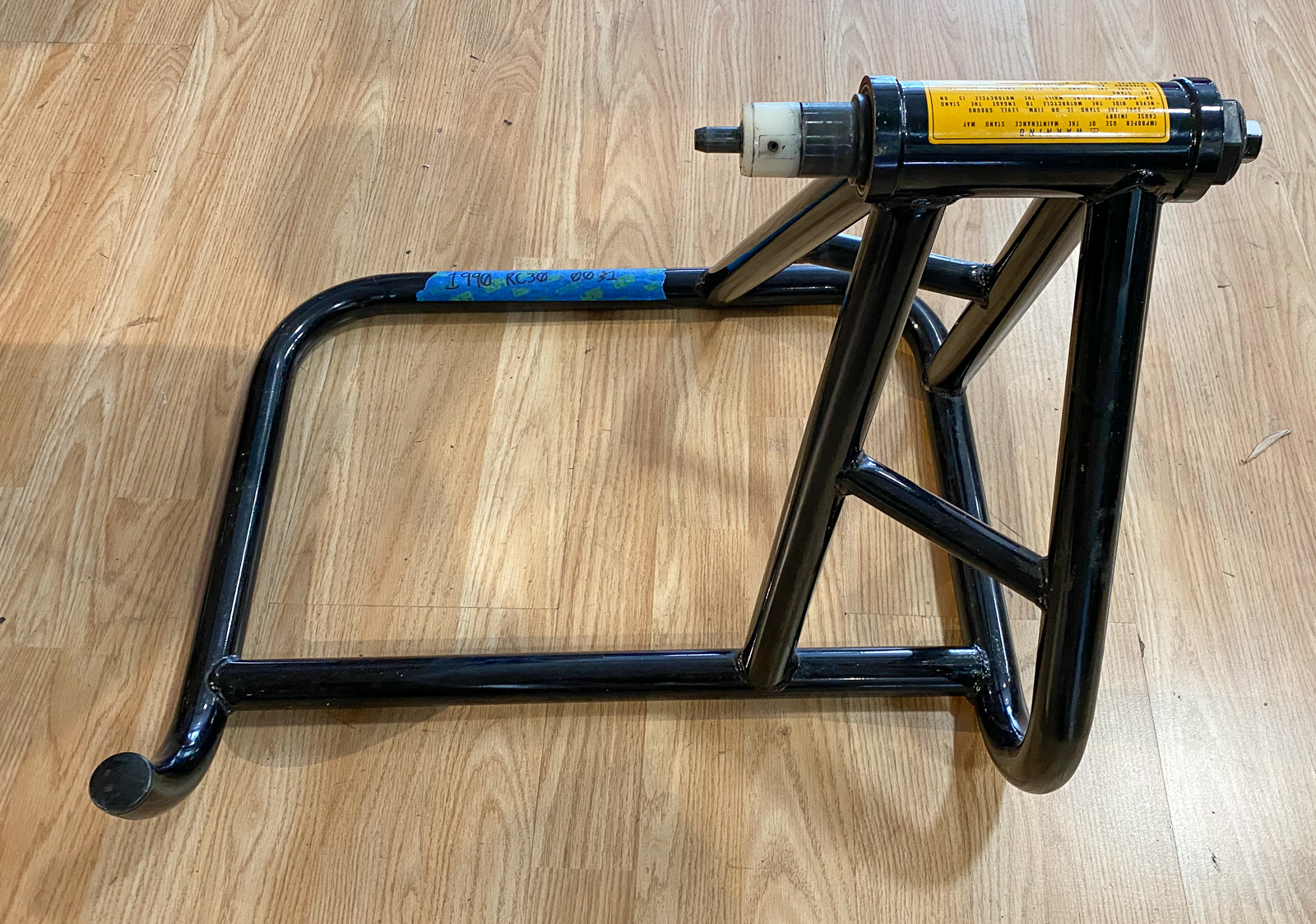 This is a really nice RC30 that’s been well kept, runs perfect, and is ready to ride and enjoy. Have any RC30 stories or questions about this listing? Let us know in the comments! 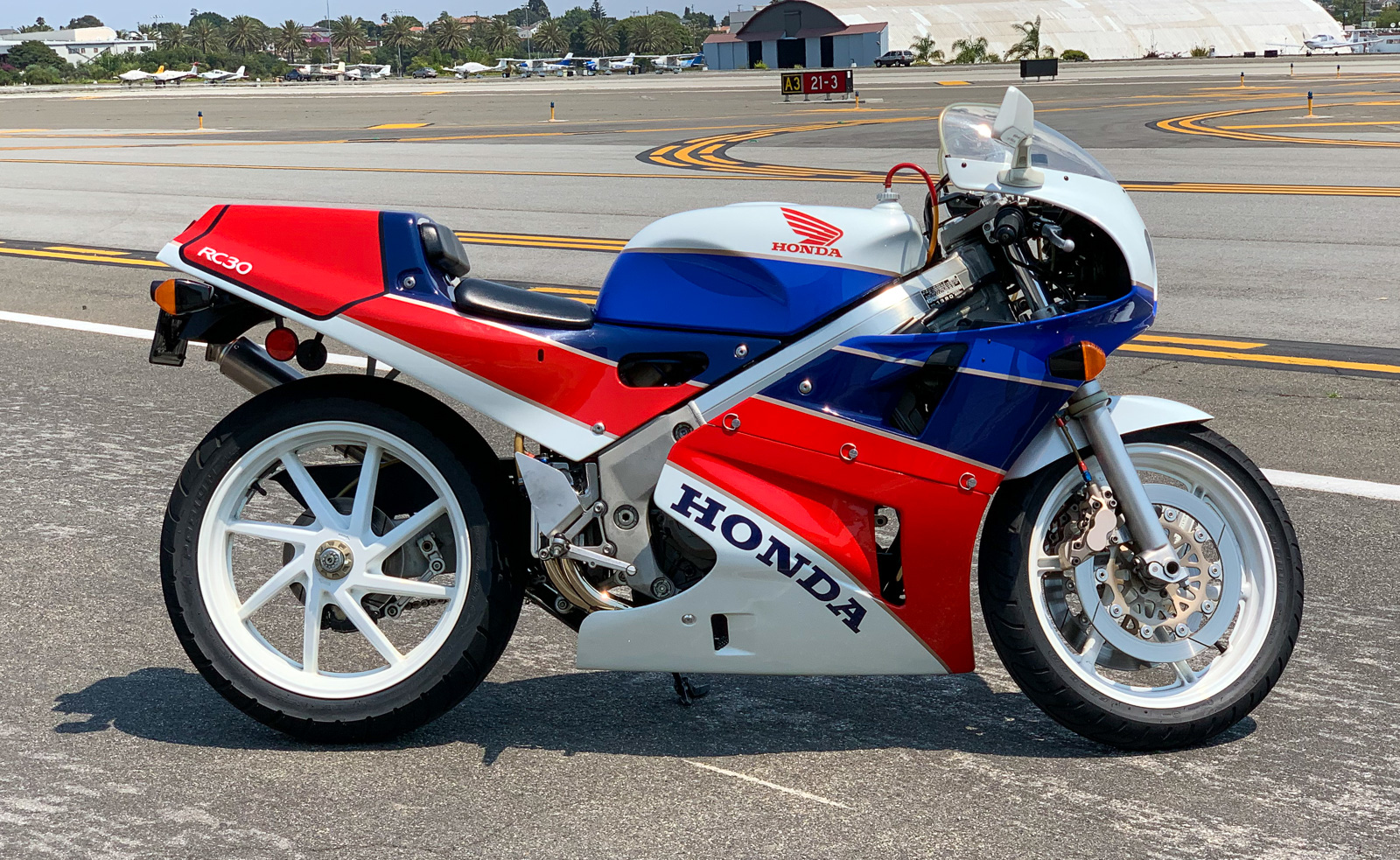