Additional photos of this 1990 Honda RC30 are available here for your perusal. We’ve included photos from this week (outside and on the lift) as well as from a couple of months ago when it was up in the museum “vault” at our headquarters.

When the new World Superbike Championship was introduced in 1988, Honda had an issue as its highly successful custom-built RVF750 factory endurance racer (not the RC45) wouldn’t be eligible to compete. So they set out to create a new top-shelf, street-legal, limited edition race bike, producing the minimum number of units required to satisfy homologation rules. Knowing it would only have to turn out a relatively small batch of machines, Sochiro Honda wanted to use the new model to demonstrate what its factory race department was capable of. The result was a no-expense-spared race-grade legend brimming with features previously reserved for track-only machinery. Japan called it the VFR750R, but the bike we fell in love with in America was named the RC30. 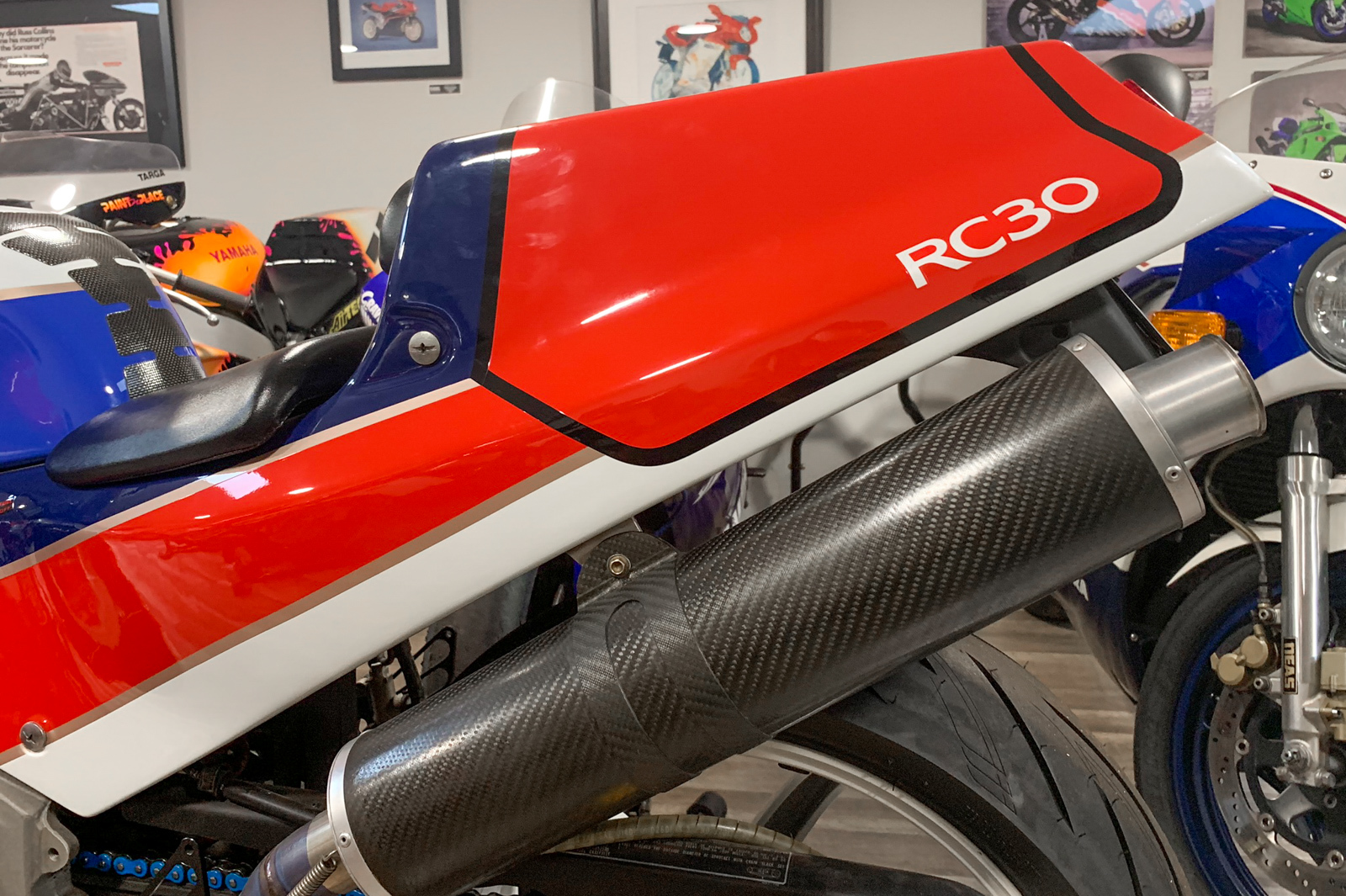 At the heart of the RC30 was a liquid-cooled, 748cc, 90-degree V4 engine with four valves per cylinder, gear-driven double-overhead cams, titanium connecting rods, forged two-ring pistons, an 11.0:1 compression ratio, and a “big bang” firing order. Paired with a six-speed transmission with a trick slipper clutch, the sophisticated V4 made 118 hp at 11,000 rpm and 55 ft-lbs of torque at 9,800rpm (unrestricted).

The VFR750R had a best-in-class dry weight of 396 lbs and a wet weight of 488 lbs, which was almost 10 lbs less than the game-changing Suzuki GSX-R750. The VFR had a top speed of over 150mph, and thanks to an incredibly high gear ratio, could break 80 mph in first gear. Like its engine, the RC30’s chassis was also heavily derived from the firm’s race bikes, including the NSR500 GP racer. The state-of-the-art lightweight aluminum twin-spar frame delivered sharp riding characteristics which were further improved by the racer-for-the-street’s top-notch suspension. The RC30 got fully-adjustable Showa suspension fore and aft — 43mm telescopic forks up front and a mono-shock out back. On top of its performance, the RC30 was lauded for its appearance. While it produced rock-solid, highly competent two-wheelers, Honda at this point wasn’t exactly known for its breathtaking aesthetics, though perceptions changed after the release of the weapons-grade V4. The model boasted Suzuka-style bodywork with a sleek fairing housing twin headlights, a boxy GP-inspired monoposto tail section, and an endurance style quick-change single-sided swingarm holding the eight-arm wheel originally used on Honda France’s 750 endurance racer.

Each of the exotic machines was made by hand, built by Honda’s racing division in the same facility where the factory competition bikes were born. To unlock the full potential of the RC30, HRC sold a race kit for the V4 that included upgraded pistons, camshafts, and crankshafts, as well as a full race exhaust. In total, less than 5,000 RC30 units were produced across its entire run – 4,782 to be exact — and only 316 of those were originally sold in the US. The VFR750R was first released in 1987, though only in Honda’s native Japanese market. The model wouldn’t be offered in America until 1990 — the only year it was officially sold on US shores — despite it being released to Europe and most of the other global markets in ’88. Different markets received different spec RC30s, with some versions getting a little less power. There were also two variants produced for the US; a 49-state model; and a California-version.

Designed by HRC, the RC30 was built to win races, and that’s exactly what it did. American rider Fred Merkel won the inaugural World Superbike Championship in 1988, before claiming the title again in ’89. Carl Fogarty also won back-to-back TT Formula One World Championships in ’88 and ’89. That same year Robert Dunlop won the Macau Grand Prix aboard an RC30, a feat Steve Hislop would repeat the following year in 1990. The RC30 also racked up countless wins in domestic series across the world and was piloted to a trio of major endurance race victories. The RC30 was also responsible for a ridiculous number of noteworthy feats at the Isle of Man TT. Joey Dunlop won the 1988 Formula One TT on an early example of the V4, while the same year Steve Hislop destroyed the existing Production Class TT lap record by a full 15-seconds from a standing start. In 1990 — by which time 15 of the 25 F1 TT finishers were riding RC30’s — Hislop set a new 124.4mph lap record which stood until 1999! (when it was beaten by the RC30’s successor, the RC45). 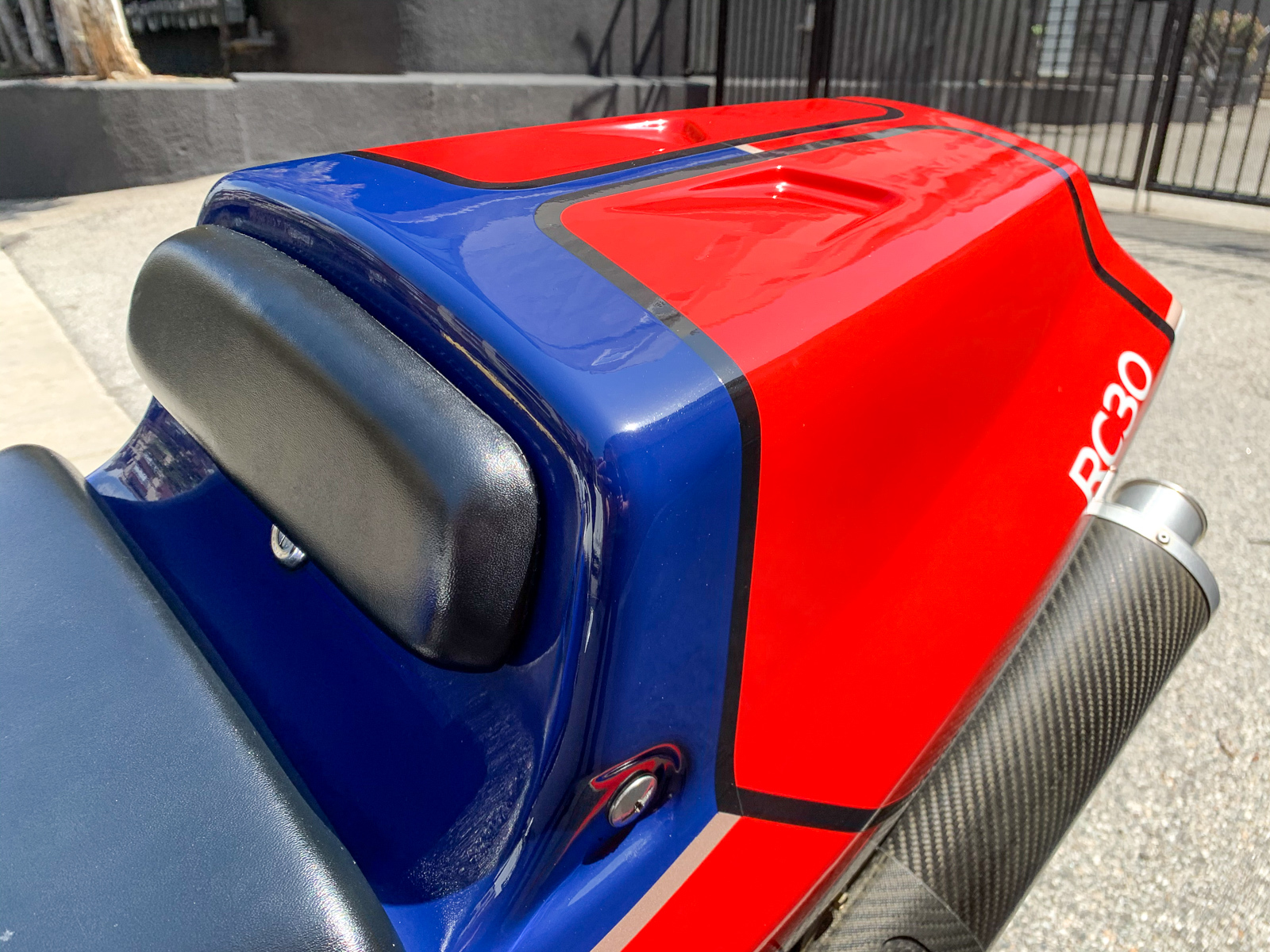 This particular 1990 US-spec (49 State) example (VIN: JH2RC3006LM200109) is in remarkable condition with a bevy of tasteful upgrades and only 15,722 original miles. It’s privately owned but has been in our special “vault” at our headquarters in Marina del Rey, California on display. The specimen boasts an Ohlins steering damper, a Zero Gravity double-bubble windscreen, Vortex anodized aluminum quick-release fuel-cap, and Sato Racing fully-adjustable black anodized aluminum rear-sets. 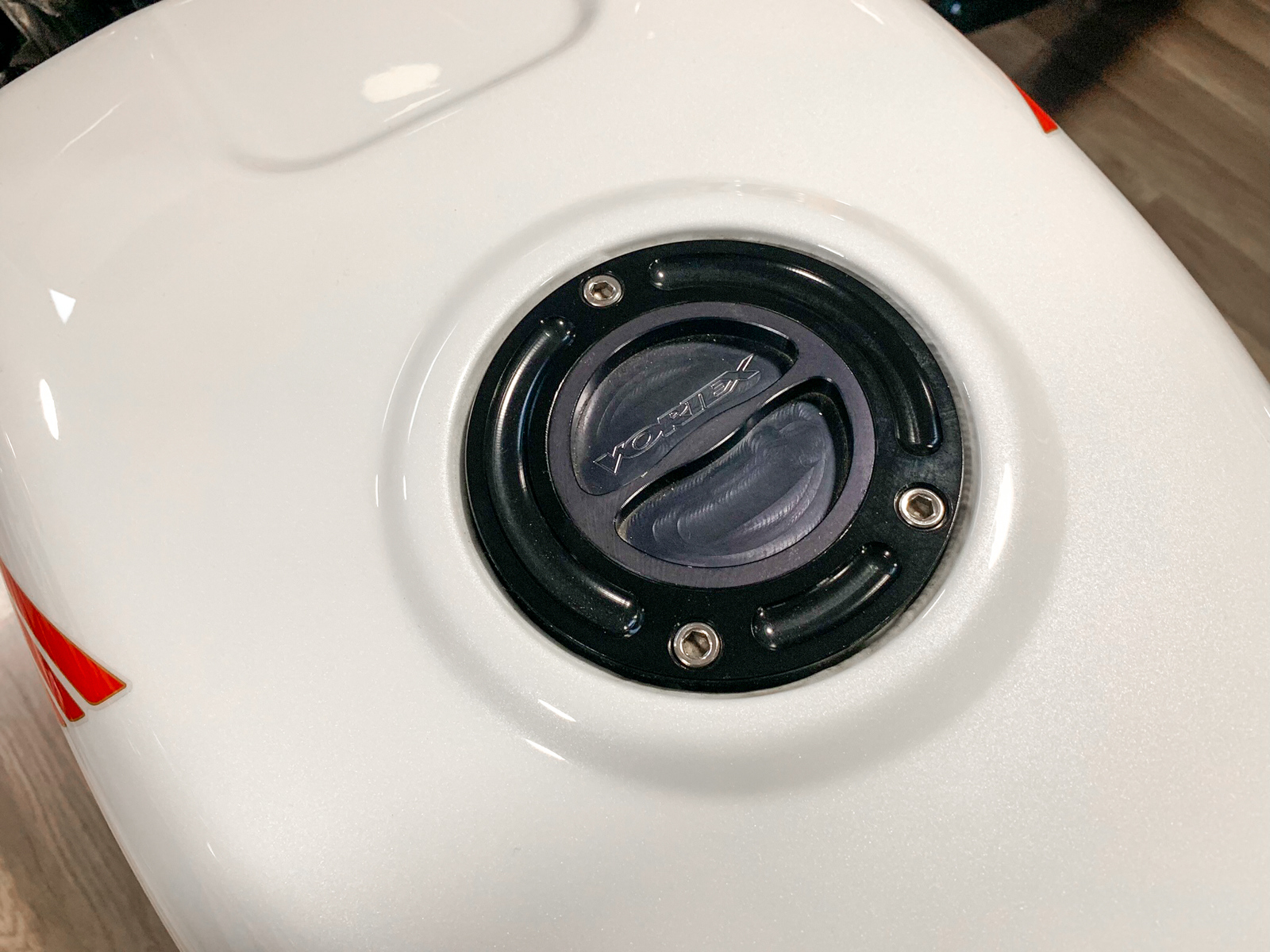 The brakes have been also upgraded with kevlar lines and cast Brembo rotors held via titanium hardware (stock included), and the example now rides on a pair of magnesium Marchesini rims. The front fender has also been signed by legendary racer and multi-time 500cc world champion, Freddie Spencer. 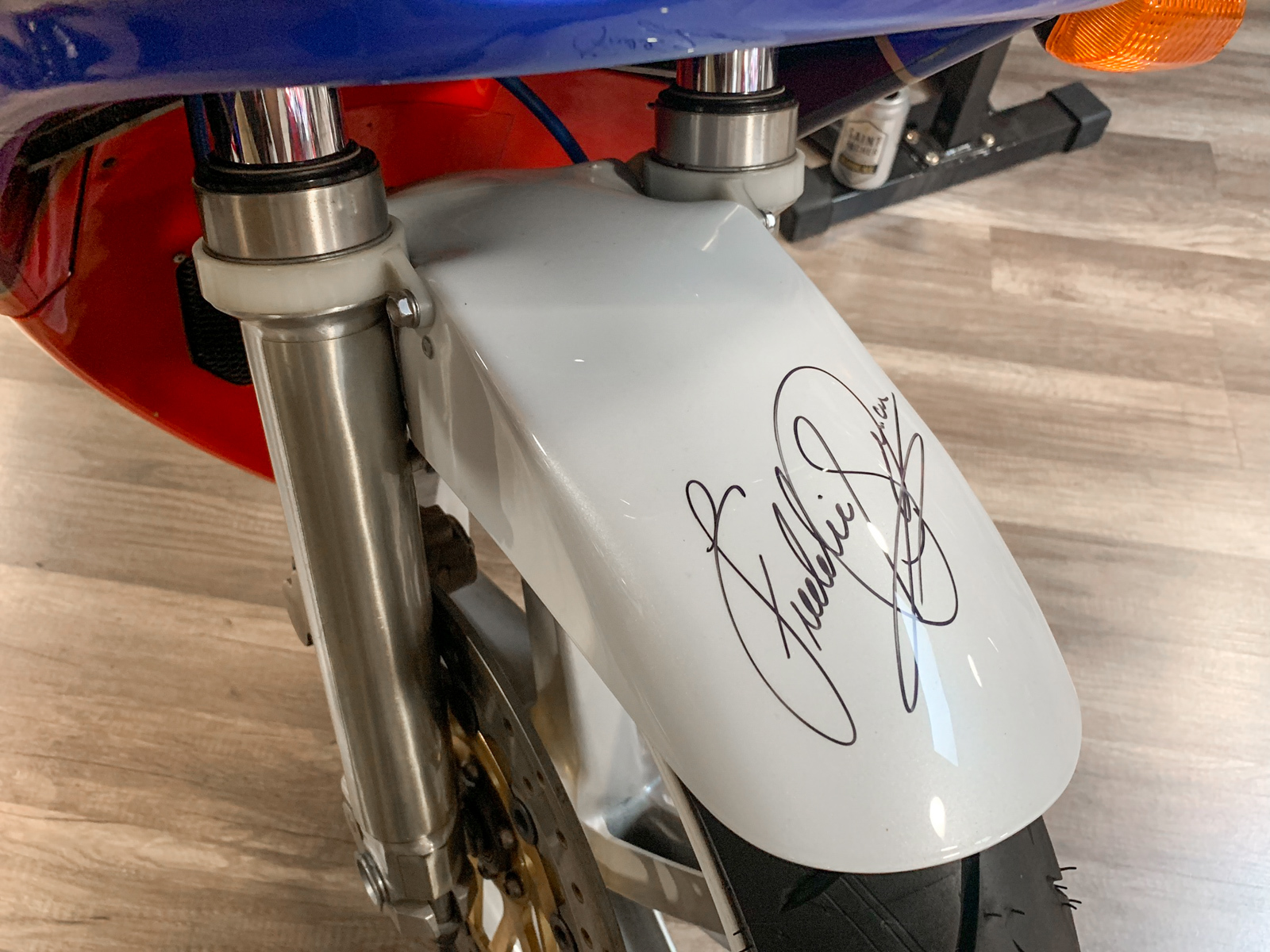 In place of the stock exhaust is a one-of-a-kind Durbahn-made full titanium exhaust system with carbon fiber muffler. The subframe has also been modified to accommodate the one-off exhaust’s high-mount position. This 1990 example also features a handful of top-shelf HRC components, including top and bottom race radiators, ride-height adjuster, deep-sump oil-pan, ductwork, and fuel-tap modification.

The sale also includes the factory tool roll, original owners manual, service manual, and HRC manual, as well as some of the stock pieces that have been replaced (stock unalterred subframe, stock wheels in excellent condition with stock rotors attached, OEM rear brake linkage, extra gearing and chain, oil panstock radiators – the large one has a small hole from poor storage). We’ll install new Honda grips before the bike is picked up by the next owner. 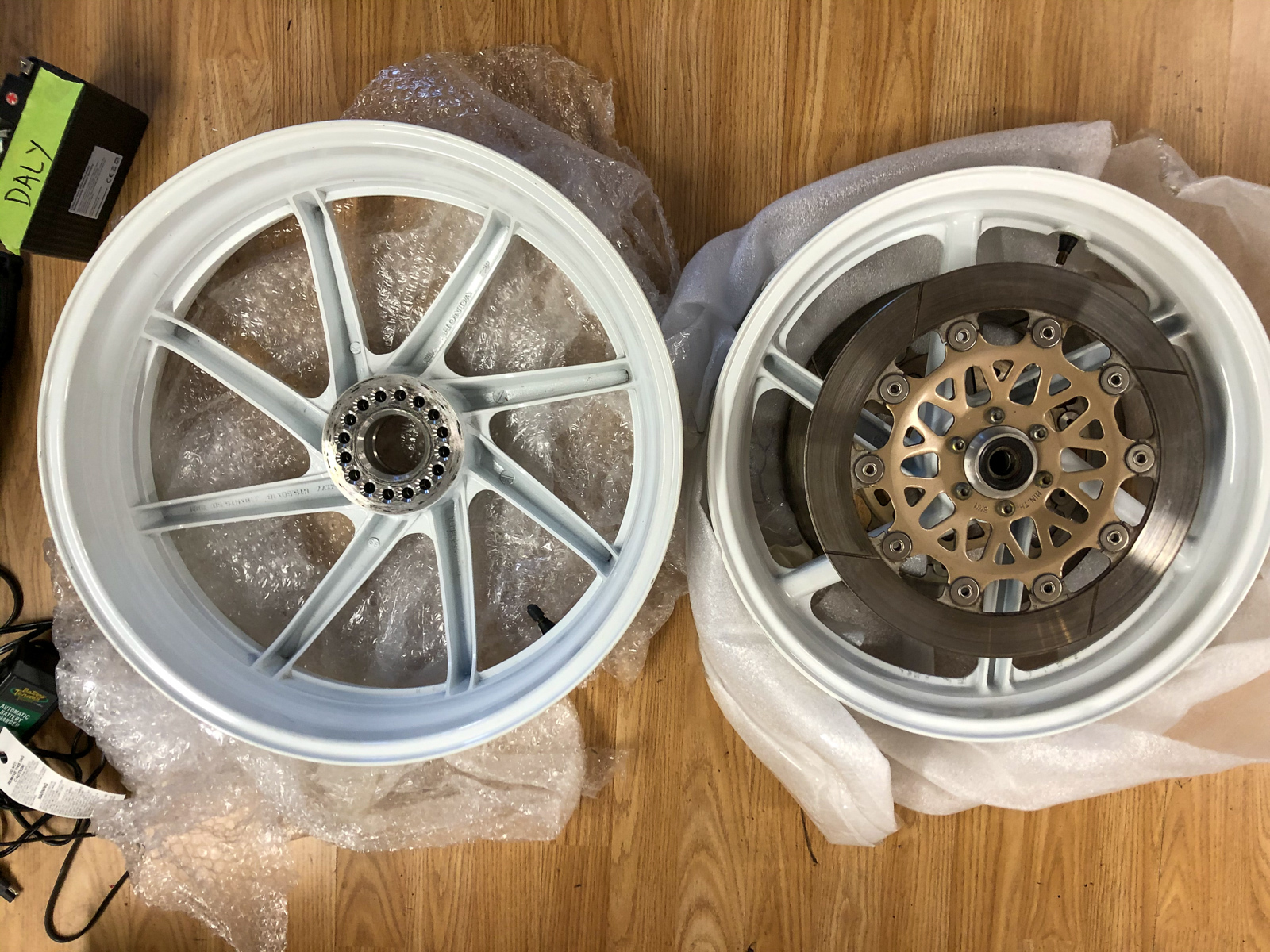 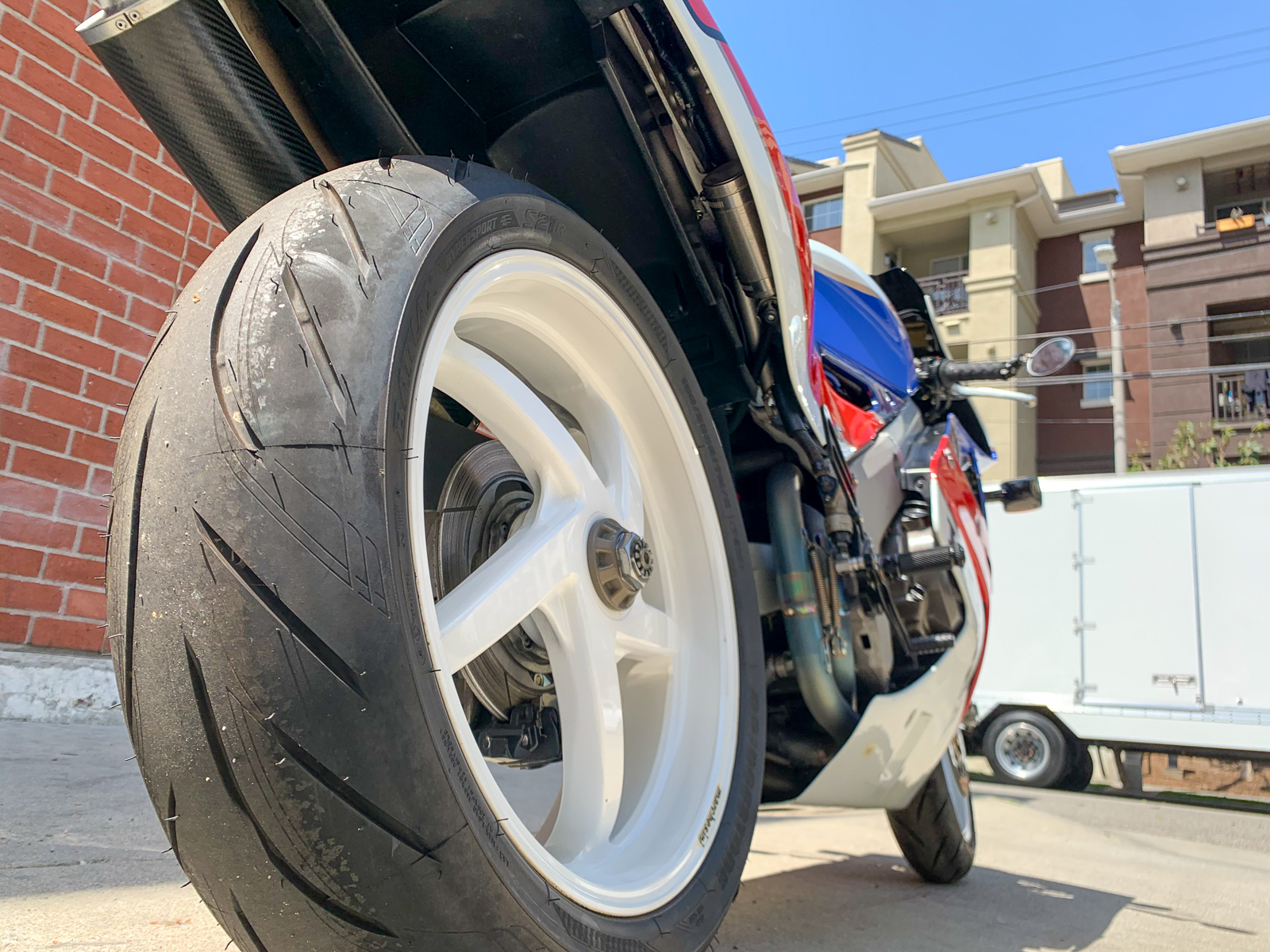 Our tech Ollie just serviced the carbs with new o-rings on the junction tubes, installed a new Yuasa battery, and did a light detail. It’s ready to ride or show! 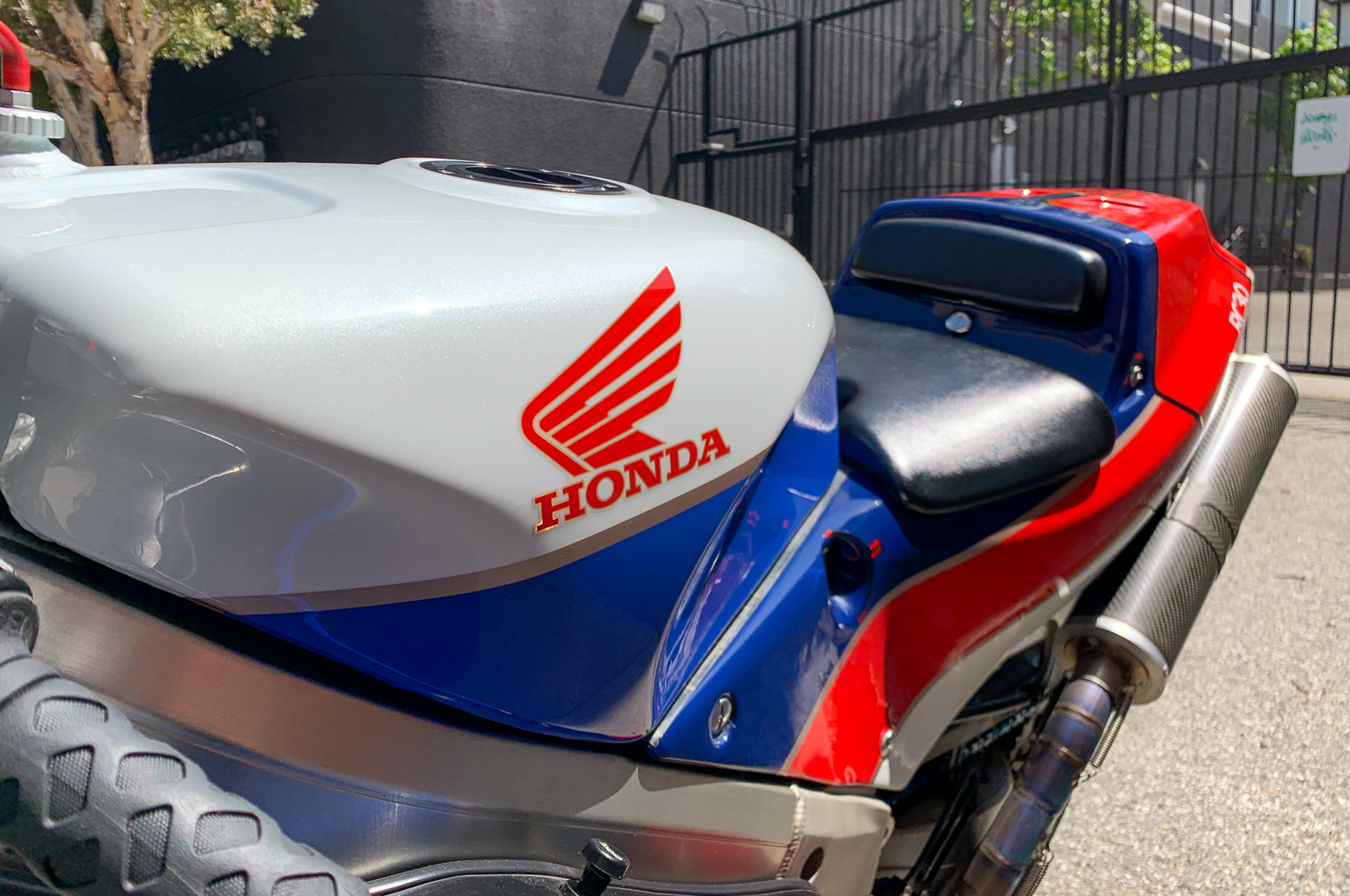 We note just one minor cosmetic issue – a paint chip on the right edge of the front fender.

Adam took the bike for a short ride prior to it going into our museum and remembers quite well that it felt much quicker then the other RC30’s he’s ridden, specifically off a light. He thinks it may have cams or something else inside the engine, which explains the deep HRC parts but unfortunately the owner suffered a head injury and doesn’t recall the history. Ben Branch, founder and senior editor of Silodrome, summed up the RC30 nicely: “the Honda VFR750R Type RC30, often just referred to as the RC30, is a unicorn motorcycle on par with the likes of Paul Smart’s Ducati 750 Imola Desmo, the Vincent Black Shadow, the Norton Manx, and the Brough Superior SS100.” Now it’s time to put this unicorn in your collection.