Click here for a CycleVIN report on this 1991 BMW K1. Additional photos are available here for your perusal. Please let us know if you require any other images. 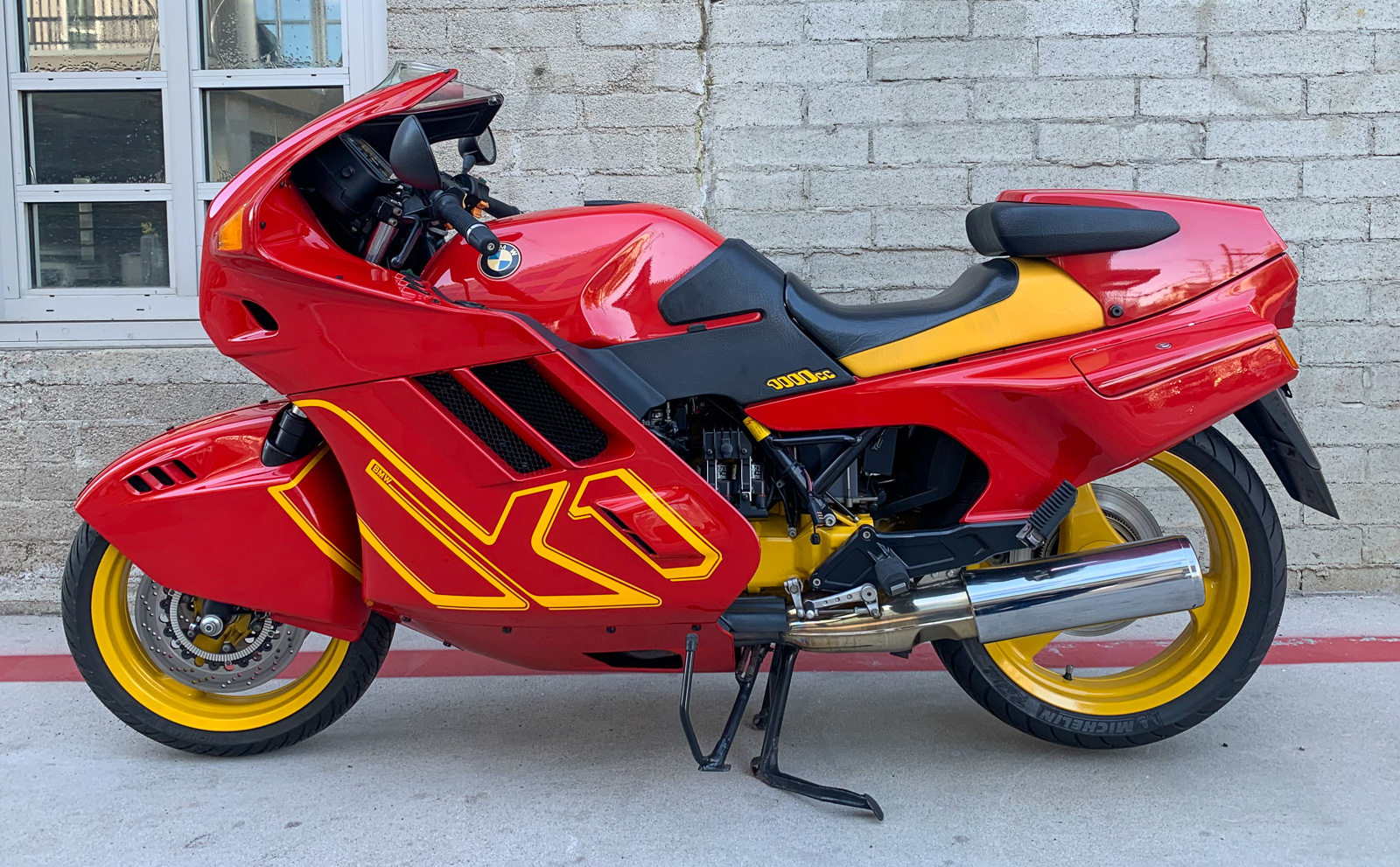 Introduced at the 1988 Cologne Motor Show, the K1 was BMW’s first attempt at producing modern sportbike. The Bavarian brand was best known for its boxer-powered tourers, and it hoped the futuristic K1 would change the pubic’s perception of what the company was capable of while also attracting a younger demographic.

Powering the K1 was a heavily revised engine based on the K100’s power plant with a lighter crank, higher compression pistons, four valves per cylinder, and an advanced “Motronic” fuel-injection system that “retuned” the engine 300 times every second. The liquid-cooled, 987cc, DOHC, inline-four — which was mounted longitudinally on its side rather than the traverse-mounted setup used on Japanese i4’s —pumped out a claimed 74 ft-lbs of torque at 6,750rpm and 100hp at 8,000rpm — 500 revolutions shy of the K1’s redline.

The K1’s sub-four-second 0-60mph time and 150mph top-speed were possible thanks to its radical bodywork. Born out of extensive wind-tunnel testing, the bulbous seven-piece fiberglass fairing and a two-piece front-fender that draped over half the wheel gave the K1 a drag coefficient of 0.38, making it the most slippery production model in existence upon its release. Taking the K1’s utterly unique appearance one step further was its bright, in-your-face paint schemes; this deep red livery with bold yellow graphics combined with the black accents emulates the three colors on the German flag. 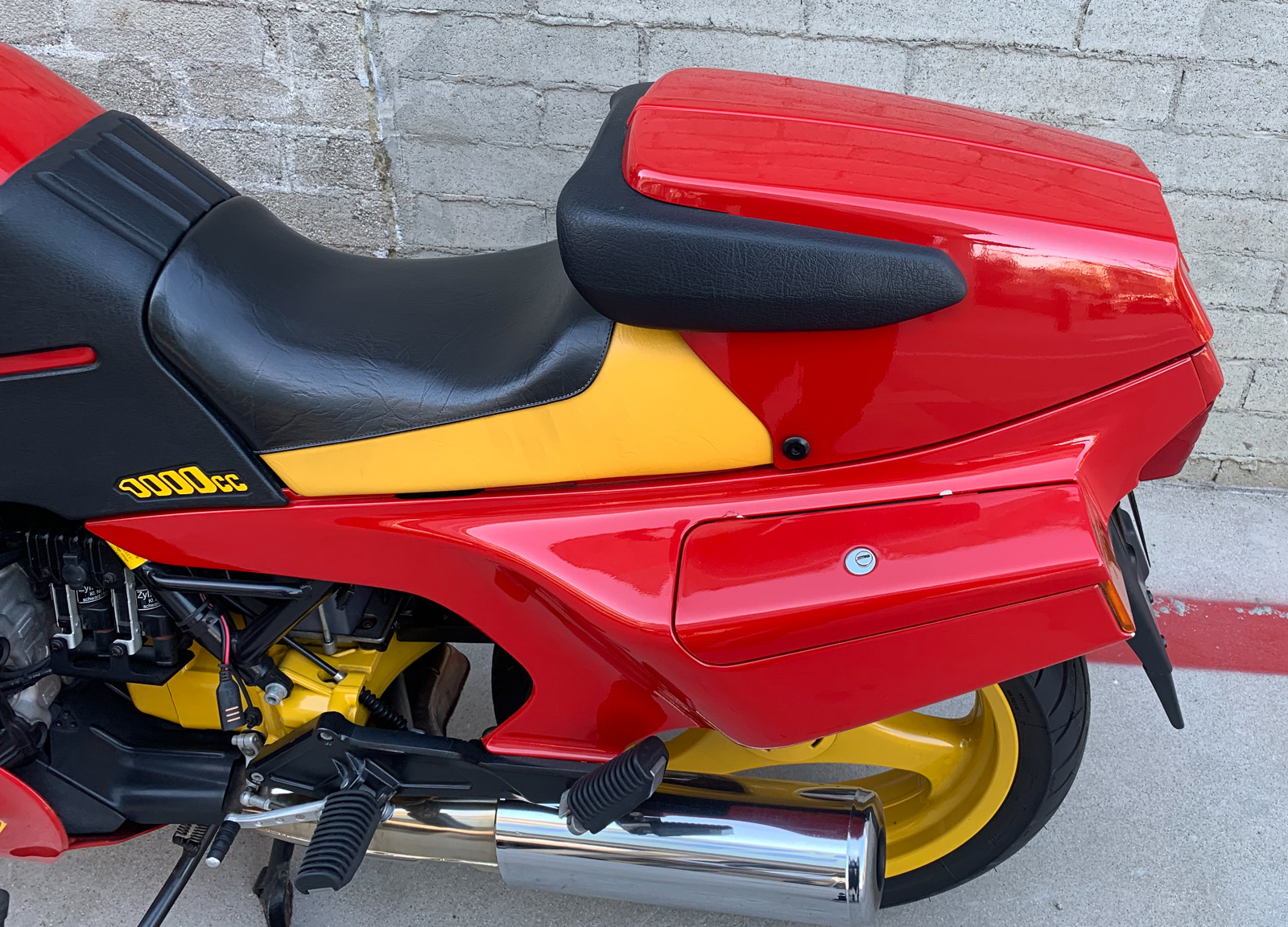 The K1’s bodywork — which was originally designed back in 1984 — also gave it impressive mileage, with a single tank being good for up to 400-miles. And when combined with the K1’s more than 600lb wet weight and 61.6-inch wheelbase (four-inches longer than any of its sport-touring competitors), the futuristic model was incredibly stable at high-speeds. The cockpit also got heated grips, and an easy-to-read main display supplemented by round analog gauges sunken into the fairing inlays on either side of the tank.

Another major highlight on the K1 was its suspension. Up front, there was a 41.62mm Marzocchi fork, while in back the bike featured BMW’s Paralever, a single-sided swing-arm, and driveshaft which helped to mitigate the shaftie’s “jacking effect” under hard braking or acceleration. This system had previously been implemented on the firm’s rugged G/S model, though the K1 marked its first use on a K-series machine. Hidden beneath its fiberglass bodywork was also a steering damper. 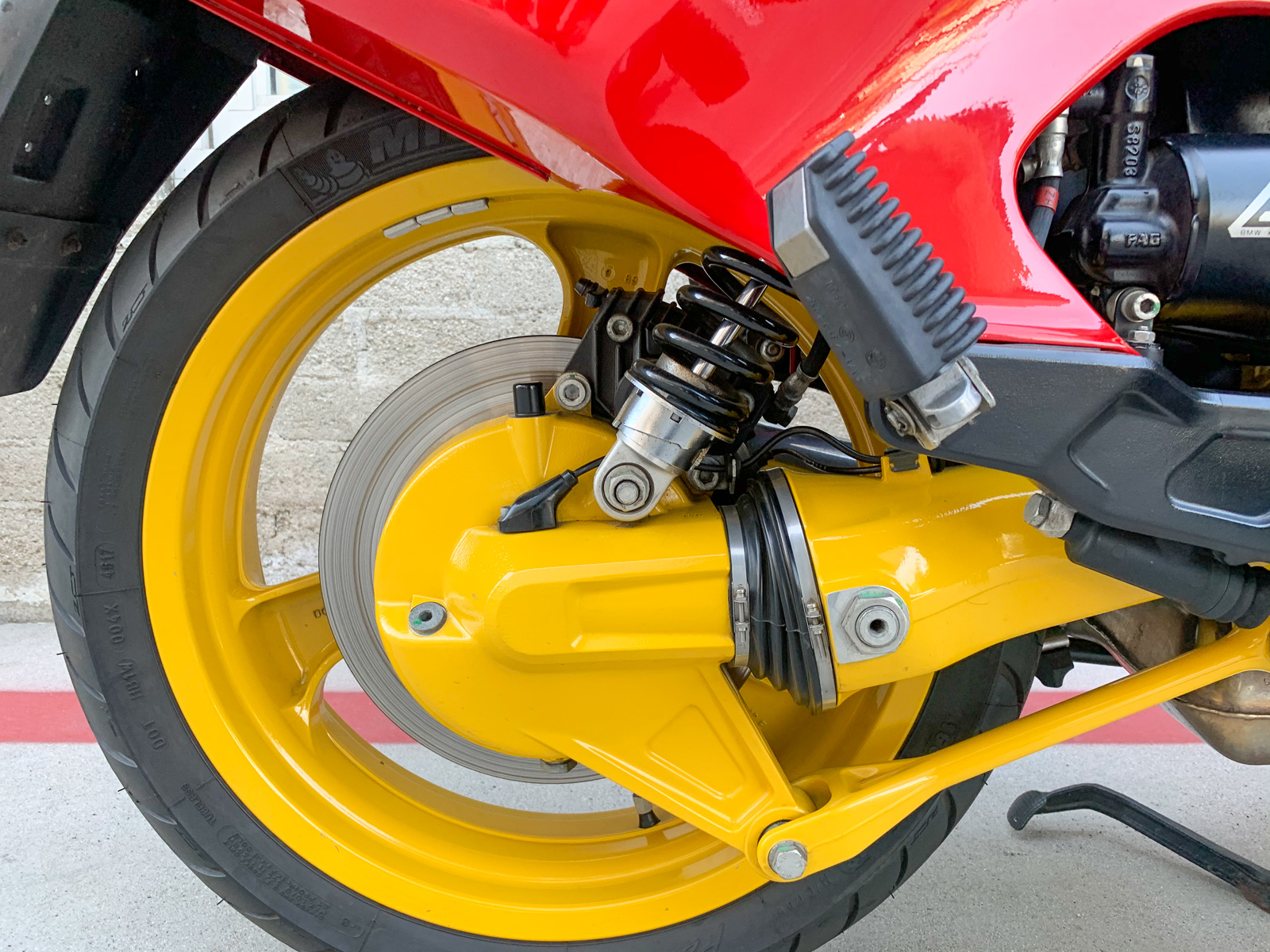 Stopping power came from dual front floating 305mm discs with “double-action” four-pot Brembo calipers and a “single action” 285mm disc in the rear, all courtesy of Brembo. Of course, the forks and brakes weren’t the only Italian hardware found on the K1, with its stock three-arm aluminum wheels — an unorthodox set up with a 17-inch front and 18-inch rear — being provided by FPS.

The K1’s Brembo units were aided by ABS systems (with toothed ABS rings), making it one of, if not the first production motorcycles to boast the now-ubiquitous safety feature. While the K1’s ABS was an optional add-on, it was a standard feature on all K1’s sold in the US market (where a 95hp version was sold instead of the 100hp-spec other markets received). The K1 was also reportedly the first production motorcycle to sport a three-way catalytic converter.

After four years of production BMW pulled the plug on the K1 in 1993, the same year the manufacturer introduced the K1100RS. A bit of a commercial flop, in total BMW, sold less than 7,000 K1 units, however, the company ultimately succeeded in reshaping its image. The K1 marked the first step in an evolution of BMW sportbikes that continues to this day with models like the mighty S1000RR. 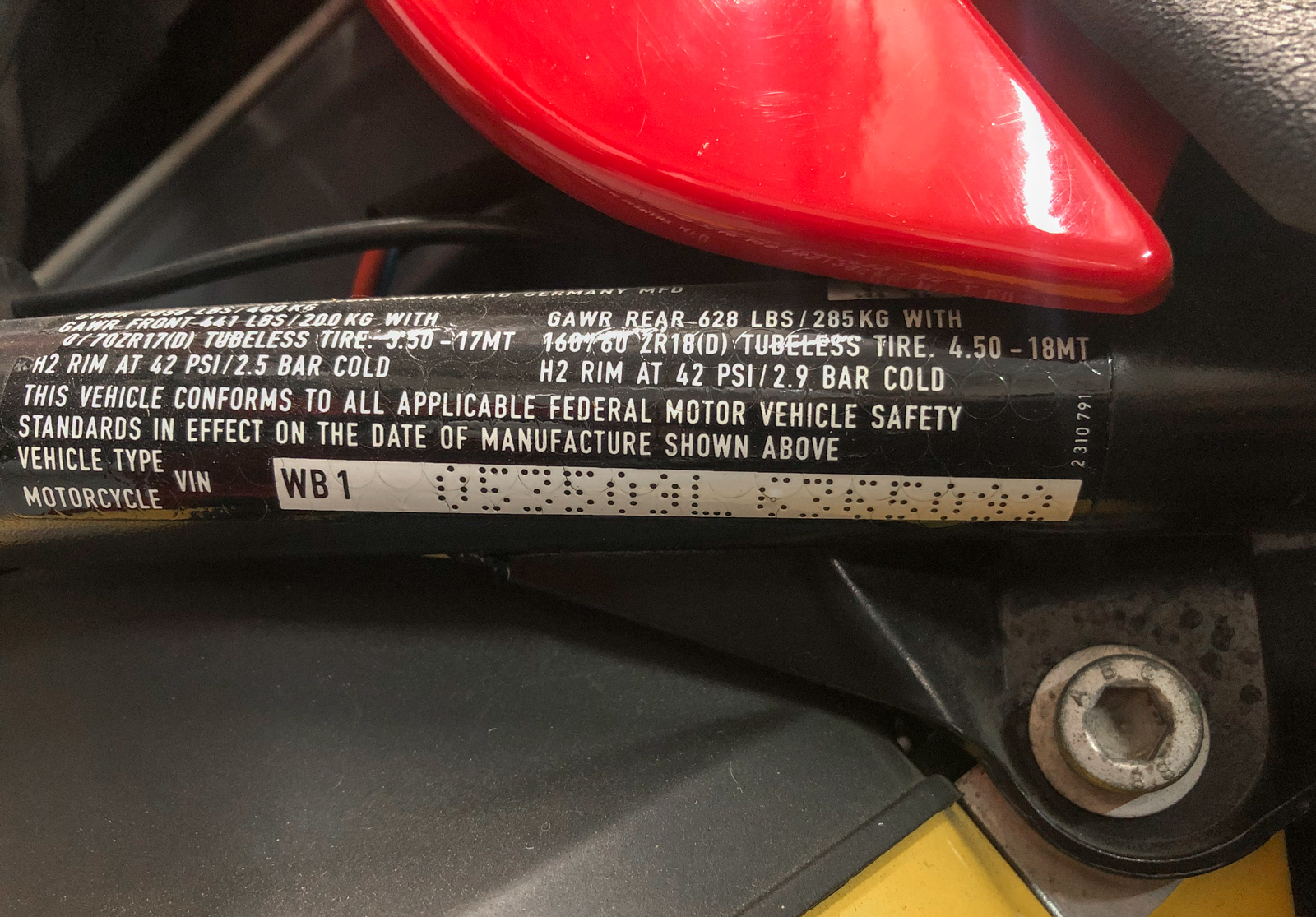 At 13,000 miles, the bike got a new battery, fresh tires, engine/transmission oil flush, and miscellaneous gaskets/seals. At 11,000 miles, it received a $2,300 service that included new spark plugs, battery, hoses, fuel filter, coolant flush, and more. It was originally bought at BMW of Hollywood on July 3rd, 1990. En route to us the shipper did some damage to the right side of the front fender but we had that fixed.

There are some minor scratches and chips in the bodywork, but this K1 presents well for a bike that is going to turn 30 quite soon. 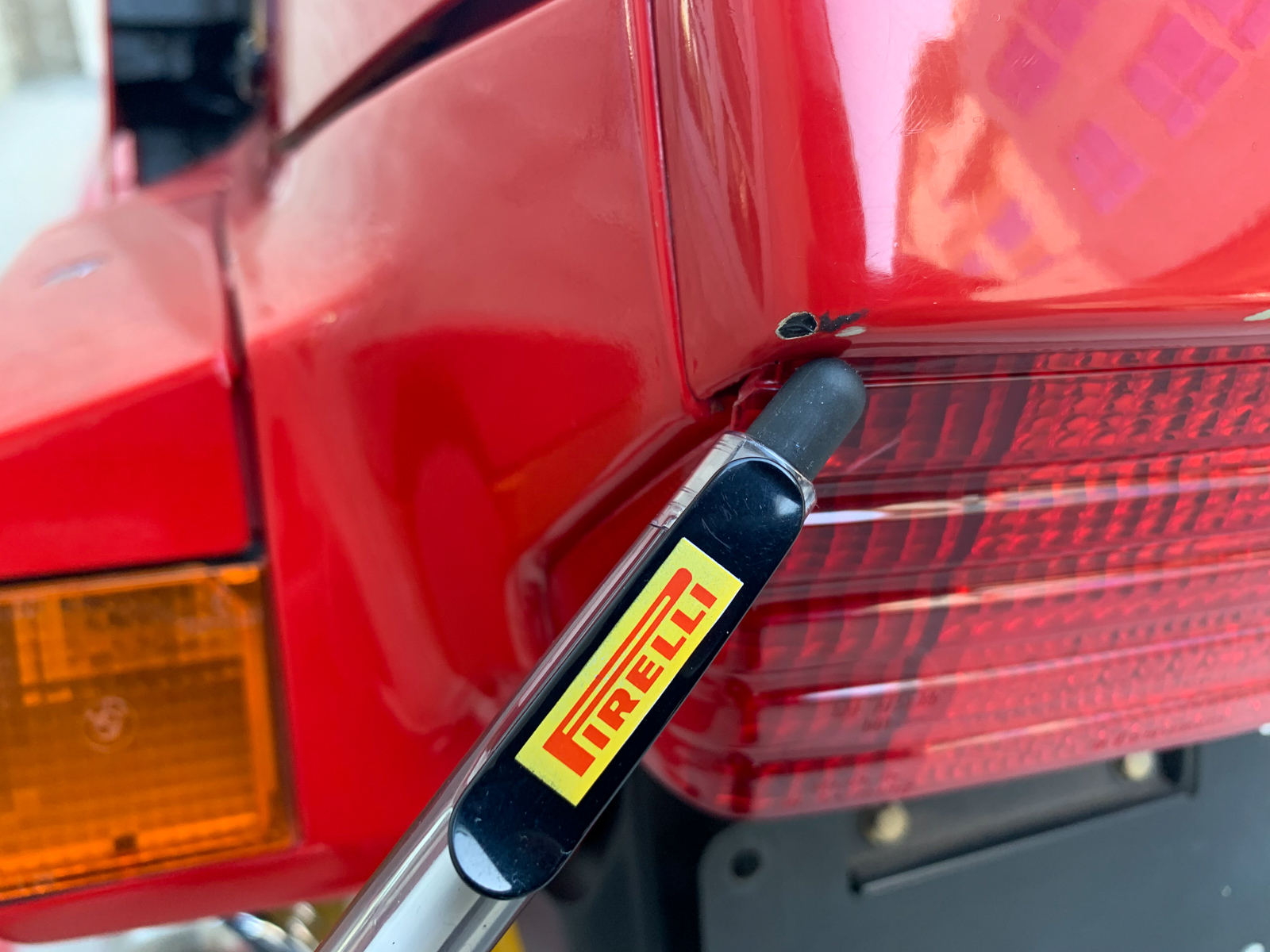 With its wild design, an exorbitant sticker price, and a bevy of trick features, the K1 was an instant collector’s piece. Considered by many to be the motorcycle that truly modernized the BMW Motorrad brand, the K1 is undoubtedly one of the most unique and iconic models ever to roll out of the factory in Berlin. 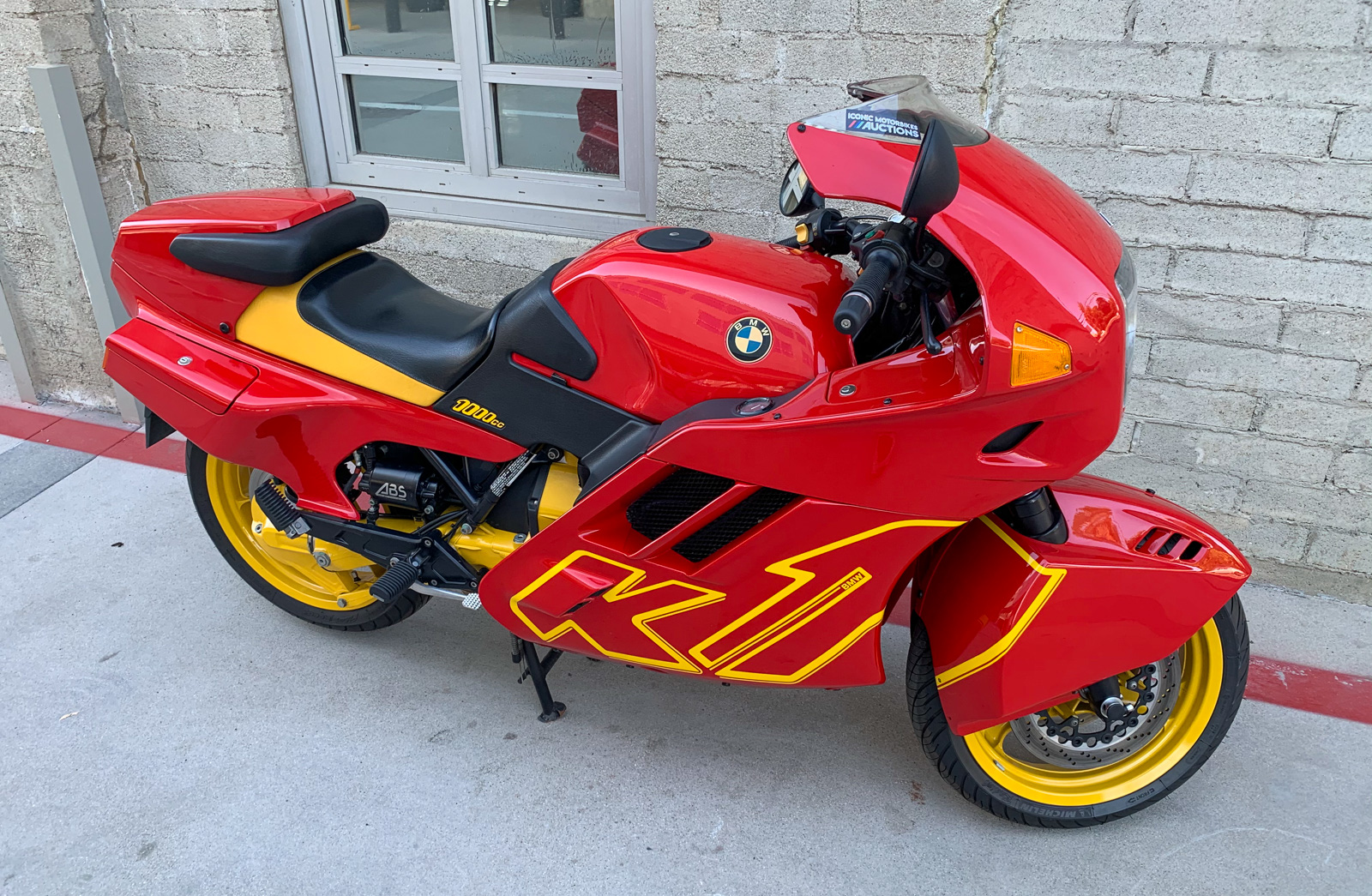 After the auction ended, the seller accepted an offer of $11,975 including buyer fees.