Additional photos of this Honda NR750 are available here for your perusal. 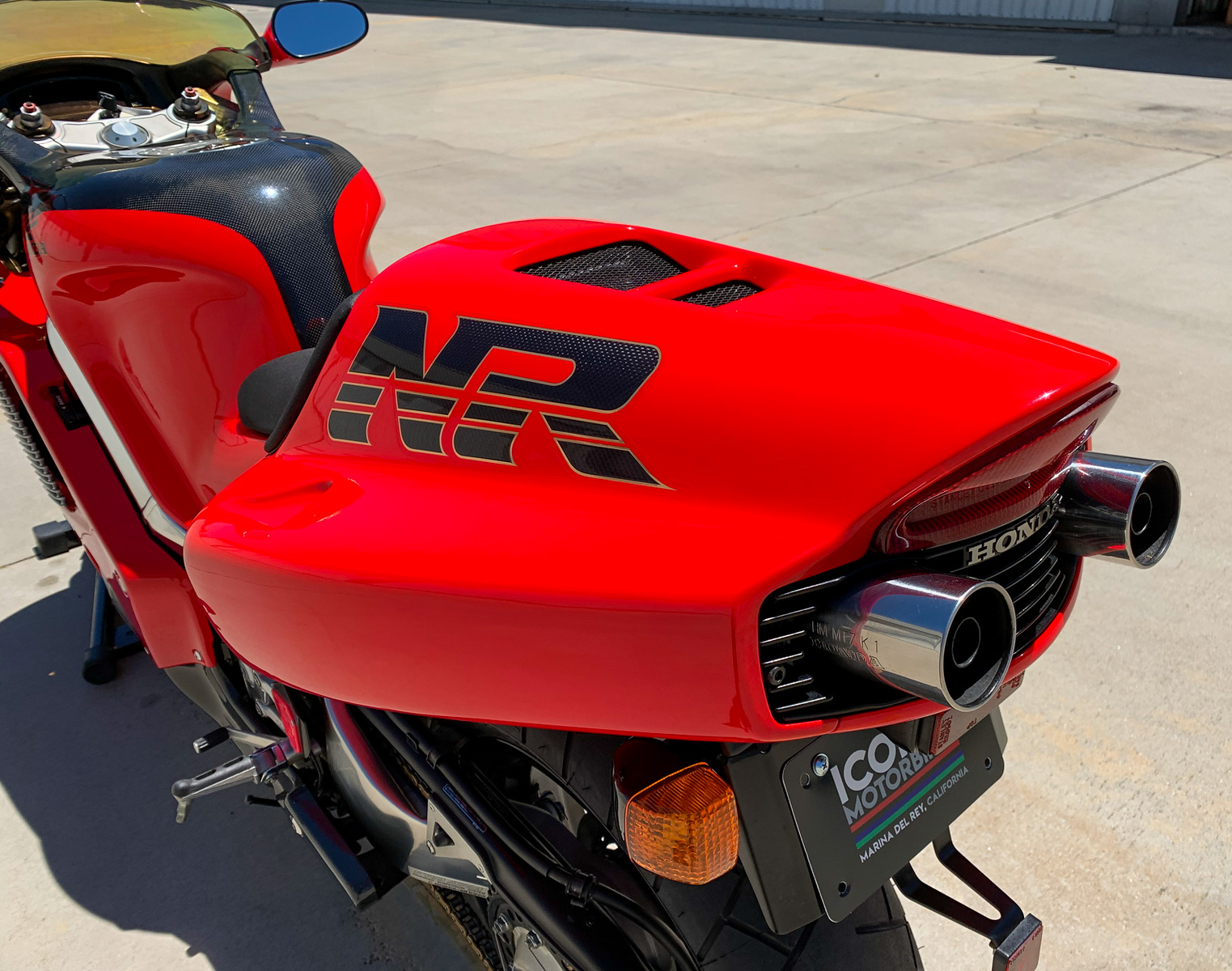 The easiest way to summarize the NR is to simply say that when it was released, it was the most expensive production motorcycle the world had ever seen. But the NR is much, much more than a hefty price tag – it’s a symbol of what can happen when one of the world’s best manufacturers goes all out. Engraved on the gas cap and displayed on the rear wheel is a simple message but bold message: “THE RESULT OF A DECADE’S PERFECTION”. 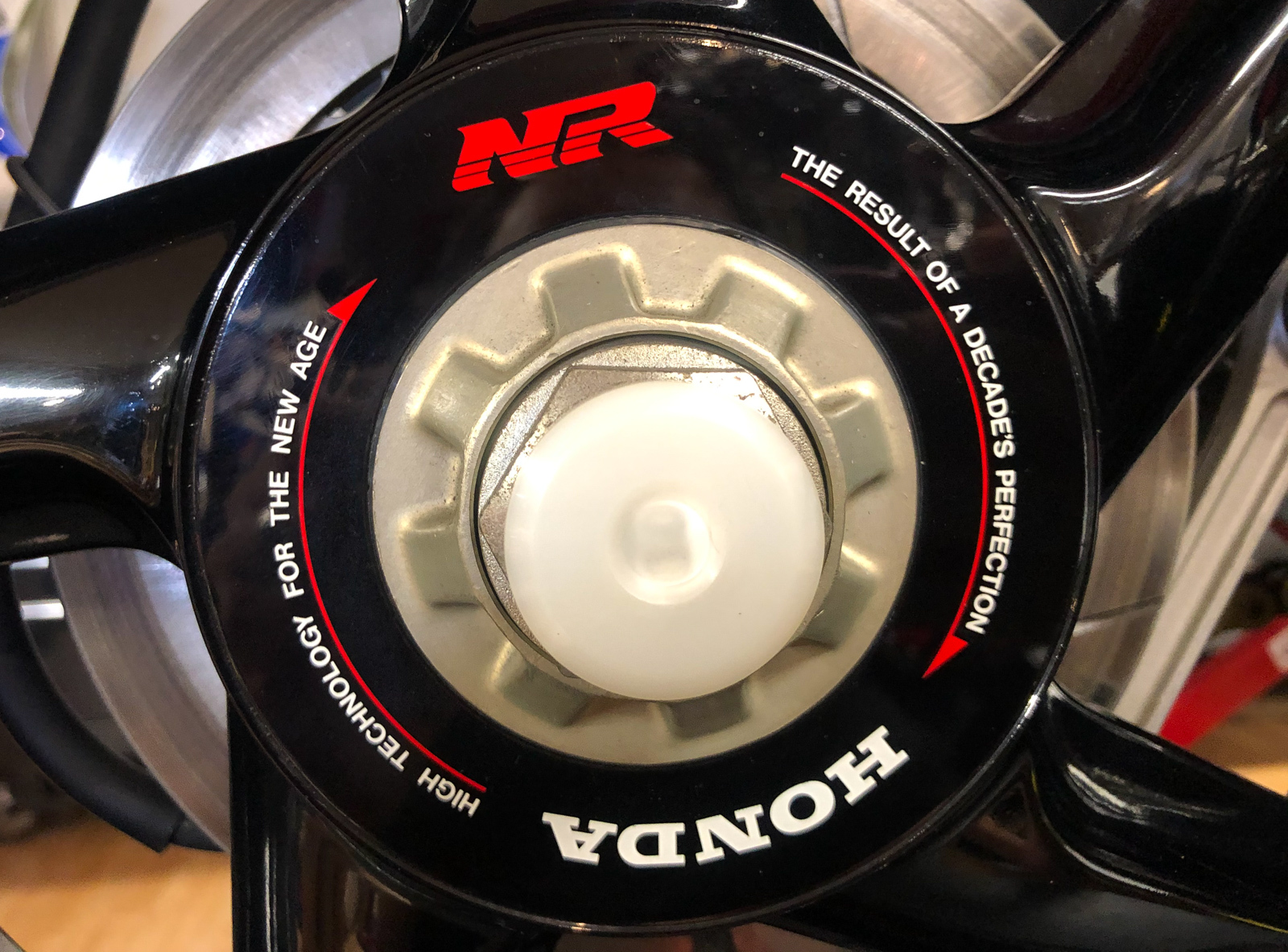 Just 307 examples were built, and with a price tag of approximately $50,000 when it was released, the NR has only been available to a select few. The bike owes its existence to Honda’s NR (New Racing) program, which started with the NR500 Grand Prix racebike of 1979. It was Honda’s attempt to fight off two-stroke dominance while being boxed in by GP rules that limited the number of combustion chambers in an engine to four. Honda got around it by essentially creating a V-8 as each piston was oval-shaped with two connecting rods. It was insanely complicated, but the 500cc race motor was capable of putting out 130 horsepower at 20,000 rpm!

The street bike was also known as the RC40 and while it’s informally called the NR750 the correct name is simply “NR”. The street motor produces 120 horsepower at 14,000 rpm, and it was full of features that were either incredibly rare or completely novel to a production street bike: eight valves per cylinder, twin connecting rods, partial carbon fiber bodywork, digital speedometer, titanium-coated windshield, underseat exhaust, single-sided swingarm…the list goes on and on. Many of the styling cues were unobtanium to the public until Ducati came out with the gorgeous 916 a couple of years later.

People are still in awe about what Honda was able to bring together in a production road bike. For more examples of what made the NR ahead of its time, check out this profile on Visor Down. 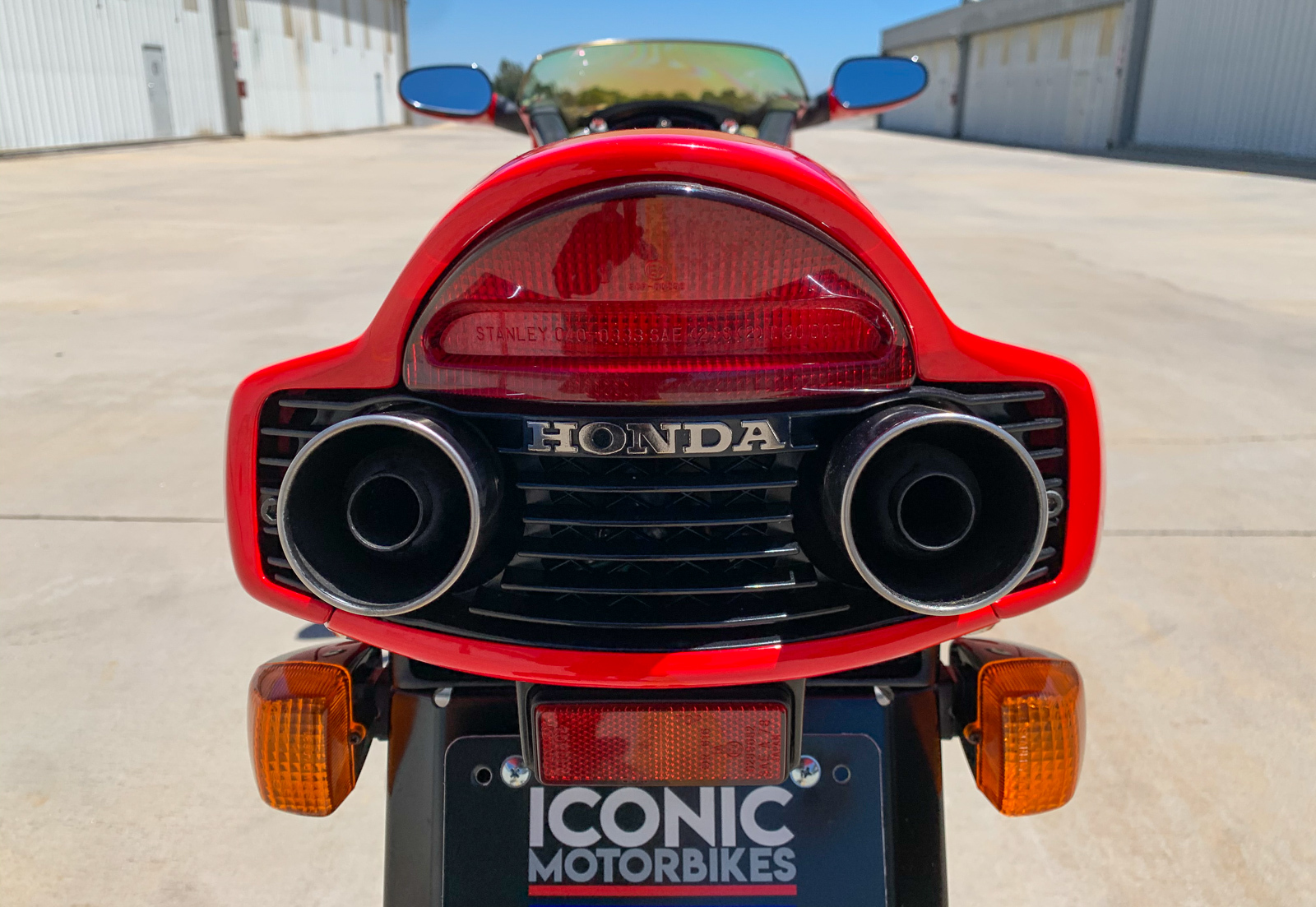 This example (VIN: RC40-1000104) came to us out of the large zero mile collection that we’ve been auctioning off for the last several months. 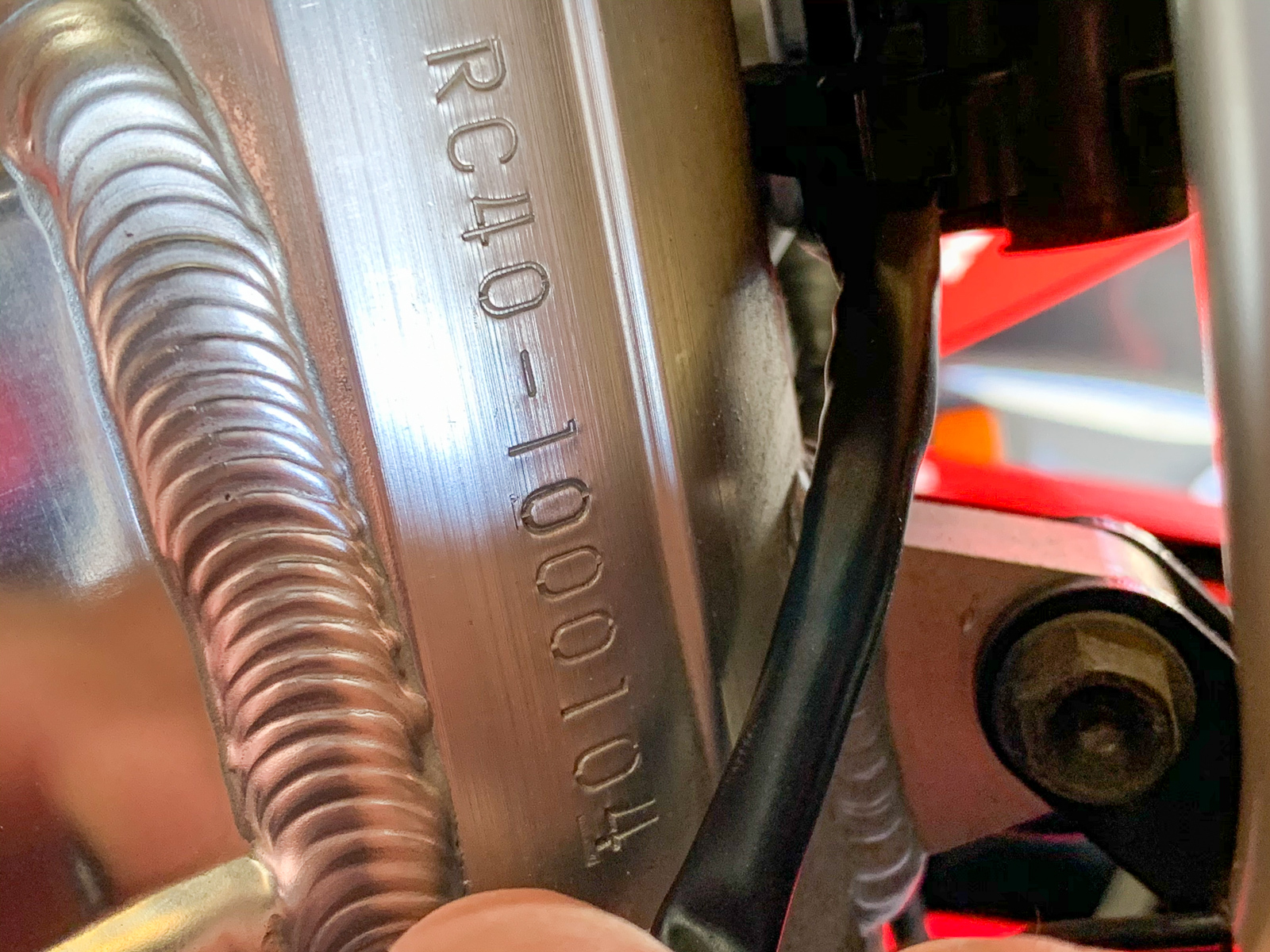 When the owner originally acquired it decades ago he was using three or four bike brokers and he no longer recalls exactly where this was sourced from. As this was not officially sold in the US, it was imported with the bill of sale and a MSO, however the MSO was misplaced. We have filed for an Oregon title on this machine (California won’t title it as it is under the 7,500 mile exemption). 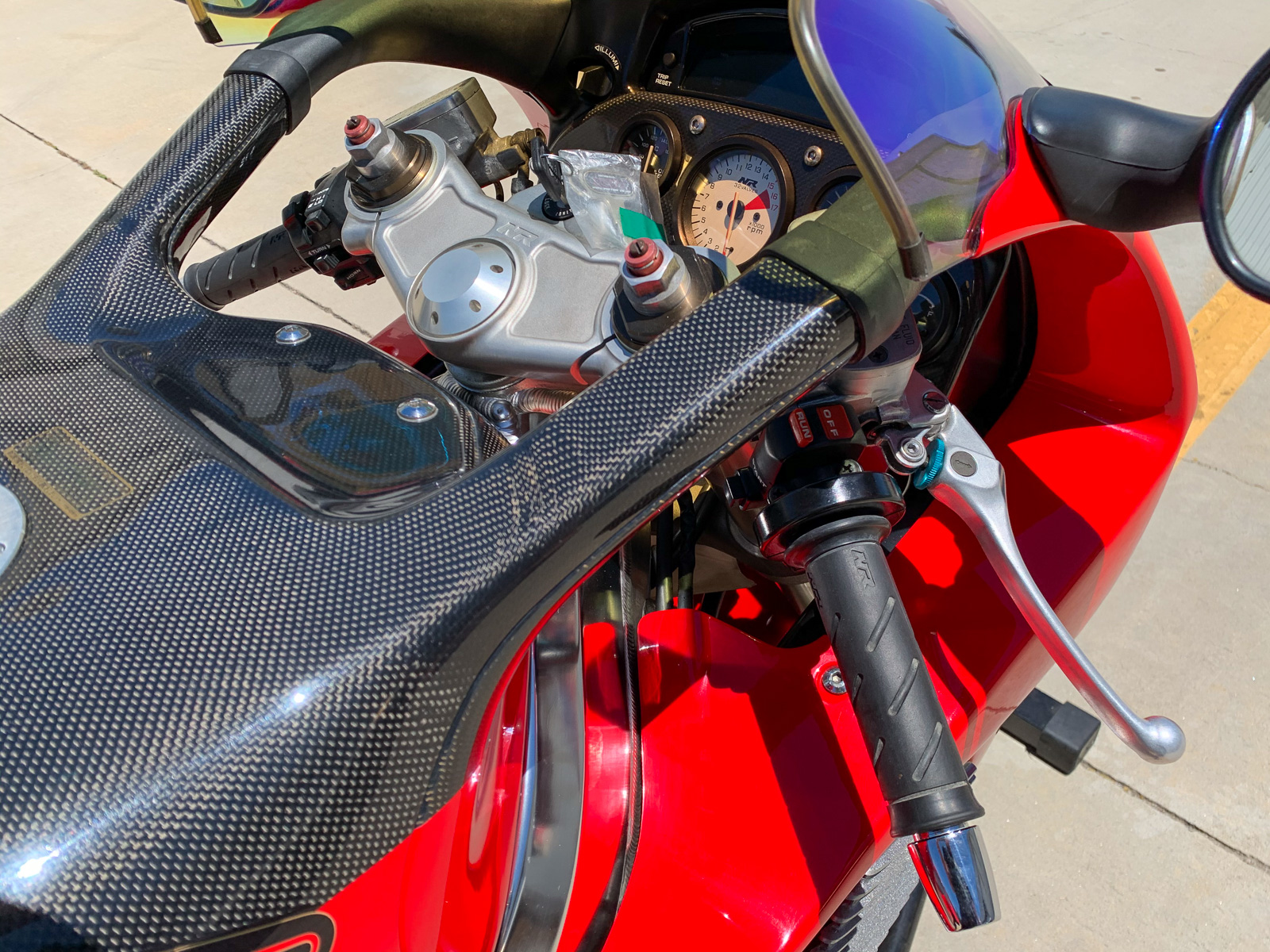 In fact, it’s well under – the odometer shows just 3 kilometers! When the owner acquired it, he immediately had a custom crate built for it – he was stacking motorcycles 3 bikes high in his warehouse and the factory crates would not be suited for that application. Unfortunately, one of the boards in the crate popped inwards and put a small hole in the left front middle fairing. We sent it out to have it repaired, though the color match on the panel isn’t perfect. It took us 7 months and 4 painters and this is the closest we could get as the original paint (neon base/red) is incredibly difficult to match. The clear coat slightly changed the hue when it hardened and cured. 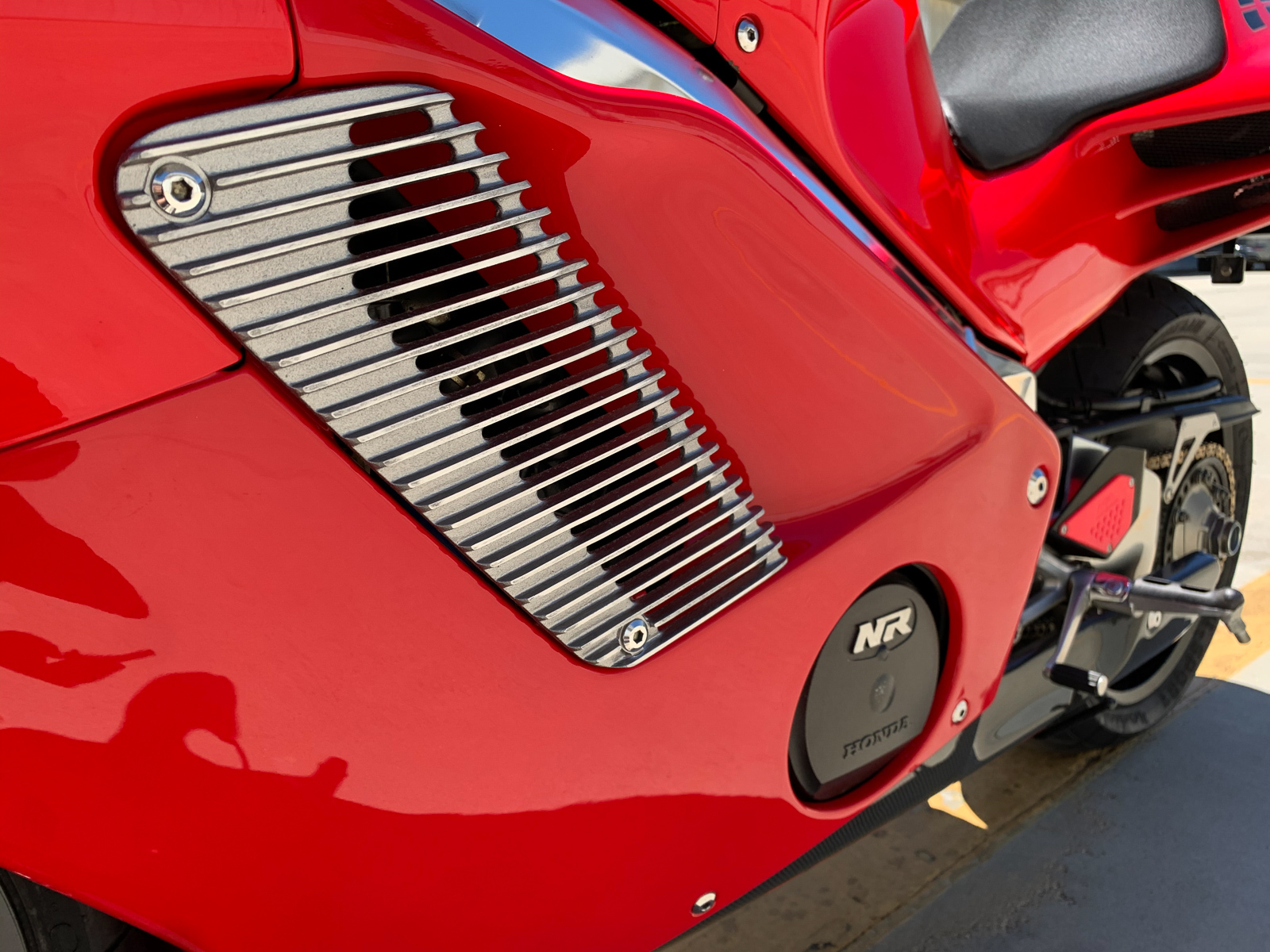 Steve the Professor spent some time with this NR, performing a fluid flush, oil change, and detail to clean up some hardware that had a minute amount of oxidization. It now starts and runs, though we obviously didn’t test ride it considering the mileage!

We see two minor cosmetic issues – a small group of scratches on the left engine cover and tiny marks on the frame. 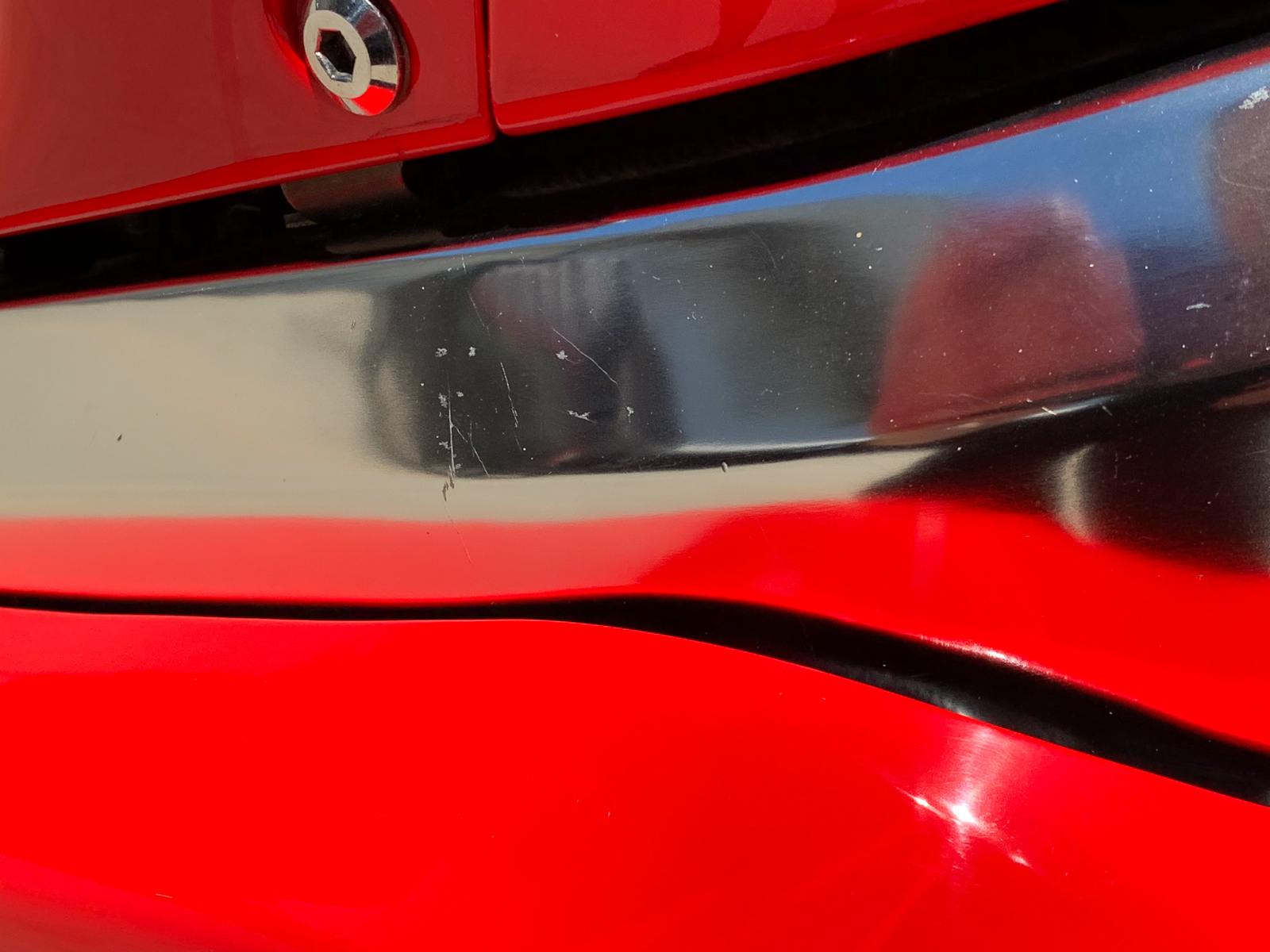 The sale includes some tools, a “Safety Points” manga, owner’s manual, dealer tag and a few things that we can’t identify because we don’t speak Japanese. If you do, we’d love an assist! 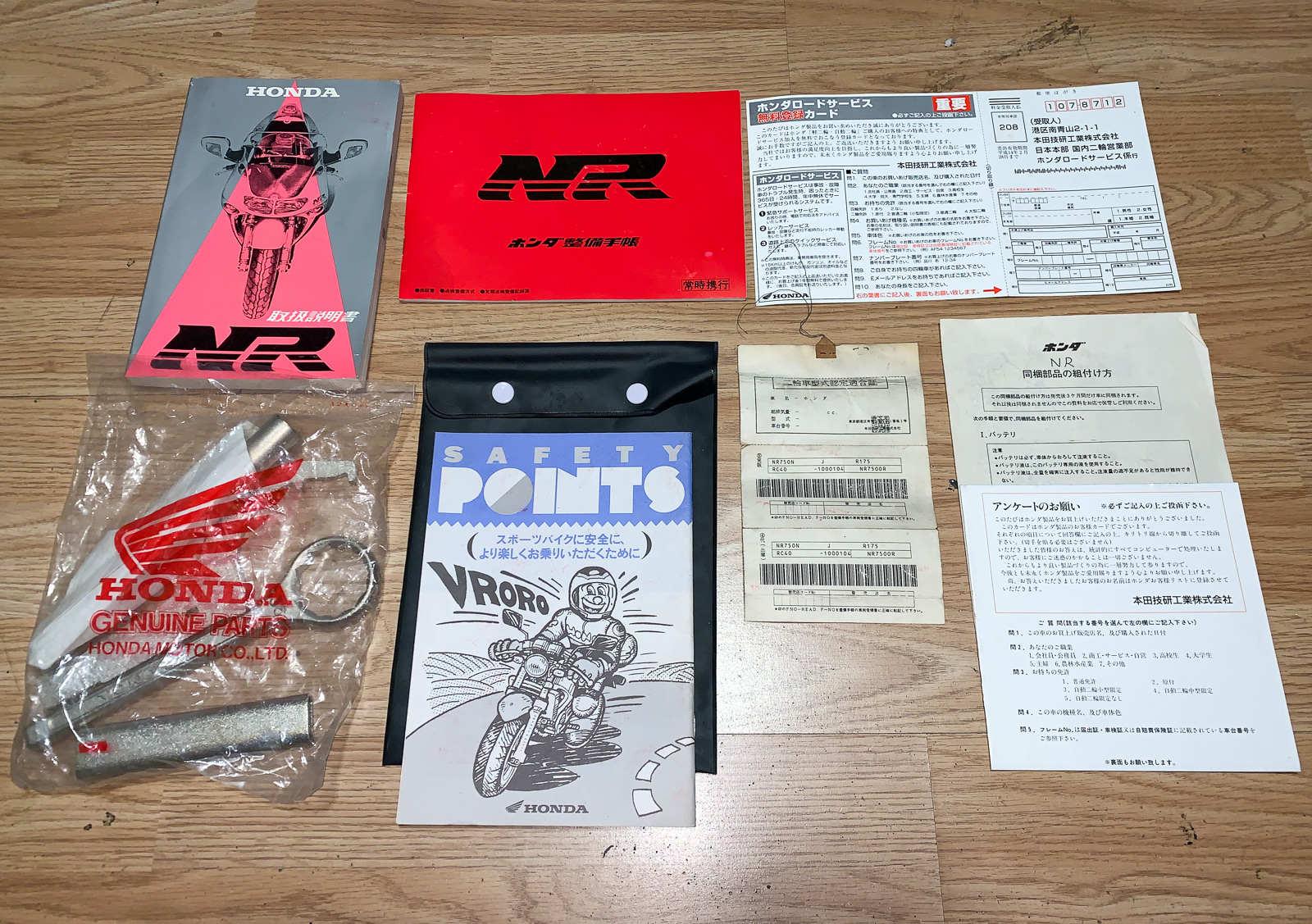 It also includes the nickel-silver key with carbon fiber insert. 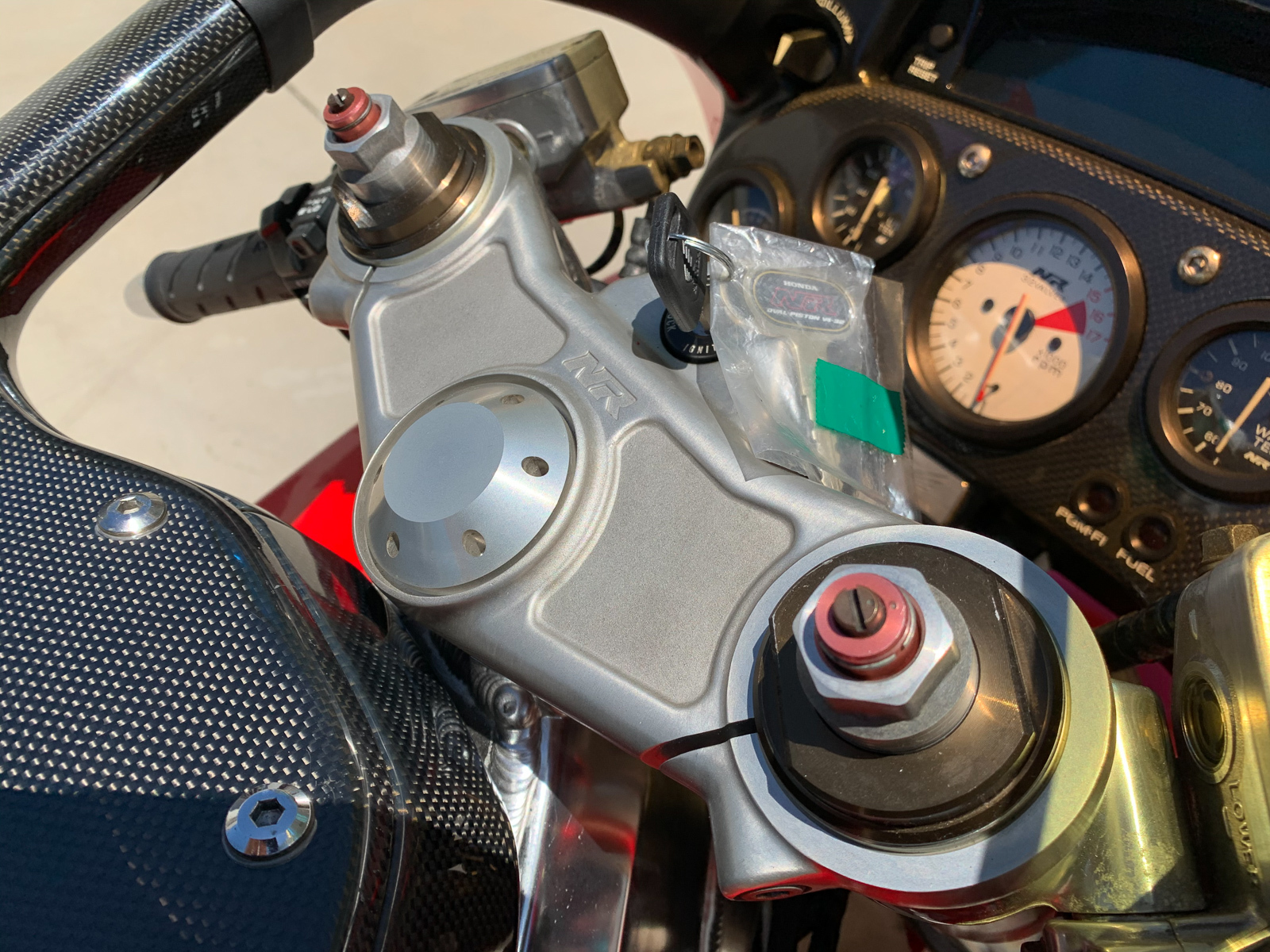 This is truly one of the most Iconic Motorbikes of all time, and we’re honored to find it a new caretaker. Got any NR750 stories or questions? Let us know in the comments below!