Additional photos of this Honda CBR600F2 are available here for your perusal.

Honda was founded in the late 1940s as Japan struggled to rebuild following the second World War. Company founder Soichiro Honda first began manufacturing piston rings before turning his attention to inexpensive motorcycles. In 1946, Soichiro Honda sold his piston-ring business and realized the need for affordable transportation, grafting war-surplus two-stroke motors onto bicycles. In 1949, the company produces its first real motorcycle, powered by a 98cc a two-stroke motor. When an employee sees the first one assembled and it is ridden outside the factory, he says, “it’s like a dream.” The name “Dream” was adopted for the bike, officially known as Model D. In 1953 the Benly J (4-stroke, 90cc) is released. At least some of these were sold with “Benly” tank-badges, and carried the Honda name on engine cases only. The Benly series lasted a long time, and ushered in an era of improved performance and were immediately popular with Japan’s amateur racers. 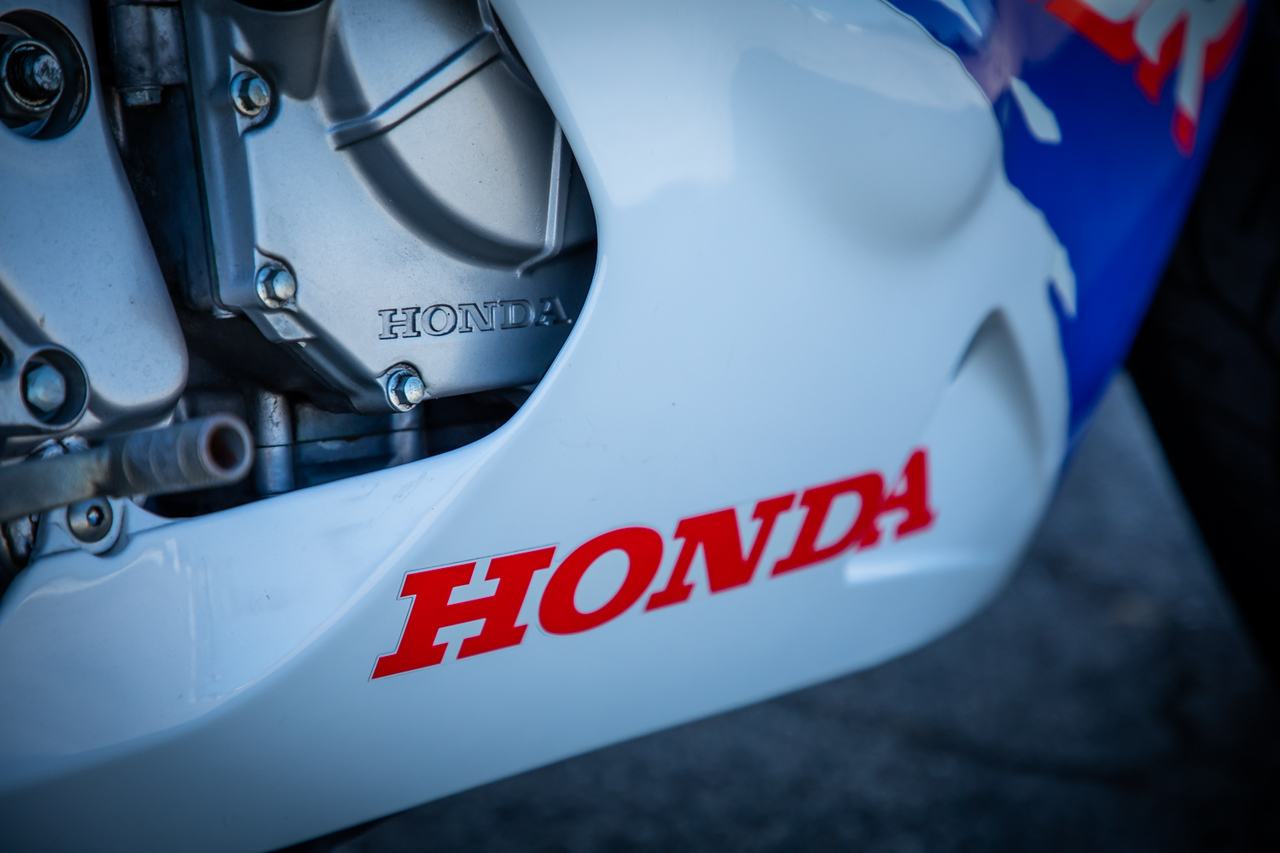 Honda has his own dream – success in Grand Prix motorcycle racing. In 1957, Honda buys one of the last Mondial race bikes. The Japanese company doesn’t copy the Italian bike, but it does use it as a source of inspiration and an example of the standard they need to reach. Honda enters the famed Isle of Man TT races for the first time in 1959. The company fields five machines in the 125cc “ultra-lightweight” class. The bikes are 125cc twins, of the type raced the previous year in Japanese national competition. Fast forward to 1987: the CBR600F “Hurricane” is introduced as Honda’s first fully-faired, four-cylinder street bike to take on the world.

Which brings us to the 1993 Honda CBR600F2, which promised to be a worthy follow-up to the original Honda Hurricane that debuted in 1987. The CBR600F2 had a liquid-cooled DOHC engine with a 65mm x 45.2mm bore and stroke that was even more over-square than the original at 63 x 48mm. The cam chain was moved to the right end of the crank to eliminate one crank journal, and compression was bumped up from 11.3:1 to 11.6:1.

The bike also featured 34mm flat-slide CV carbs vs. the older model’s 32mm round-slide units. With lighter pistons, crank and con rods, it was able to achieve a 500-rpm bump in the rev-limit to 13,000 rpm. The engine was known for making good top-end power without sacrificing the midrange, which is one of the things that made it so special. The cams were designed with midrange power and excellent cylinder head flow, which was the secret to that top end power. The forks were upsized from 37mm to 41mm and featured preload adjustments, while a single rear shock sported preload and rebound adjustments, in addition to a box-section swing arm.

Six-spoke RC30-style wheels were 3.5 x 17 inches in front and 4.5 x 17 inches out back. The chassis was a twin-spar design made from steel. Front rotors were 275mm-diameter units squeezed by twin-piston slide-pin calipers.

When fully tanked up, the F2 weighed a lean 455 pounds, making it the lightest bike in its class. The dyno charts show the CBR-F2 made 85 horsepower and turned in quarter-mile times of 11.3 seconds at 120 mph. Owners reported that the F2 was impeccably balanced and could easily be street-ridden or raced on the track. It was a generation defining motorcycle – in a November 2009 article, Cycle World summed up the time by saying, “during the years of 1991-1998, it was almost an anomaly to see anything other than the Honda CBR600F2 and F3 on top of a 600cc magazine shootout or in the winner’s circle.”

If you’re more of a visual learner, check out this Retro Review from MotorWeek, in one of their rare looks at a motorcycle!

This CBR (VIN: JH2PC2509PM200461) has been on display in a collection for quite some time – expect the usual recommissioning of a carb clean/new battery if you’d like to make it a rider again. Our White Glove service would be glad to arrange that for you. In addition, the current tires are over 10 years old so you should expect to replace them as well.

Cosmetic flaws include scratches on the exhaust, body panels, and engine – photos of all are included in the usual album up top.

A monument to Honda’s dominance in the 90s, this CBR is a minor service away from serving as a beautiful classic rider that’s fun and relatively comfortable.

This Honda CBR600F2 sold for $3,900 including buyer’s fee on our classifieds. Congratulations!