Click here for an instaVIN Motorcycle History Report on this 1993 Honda CBR900RR. Additional photos are available here for your perusal. 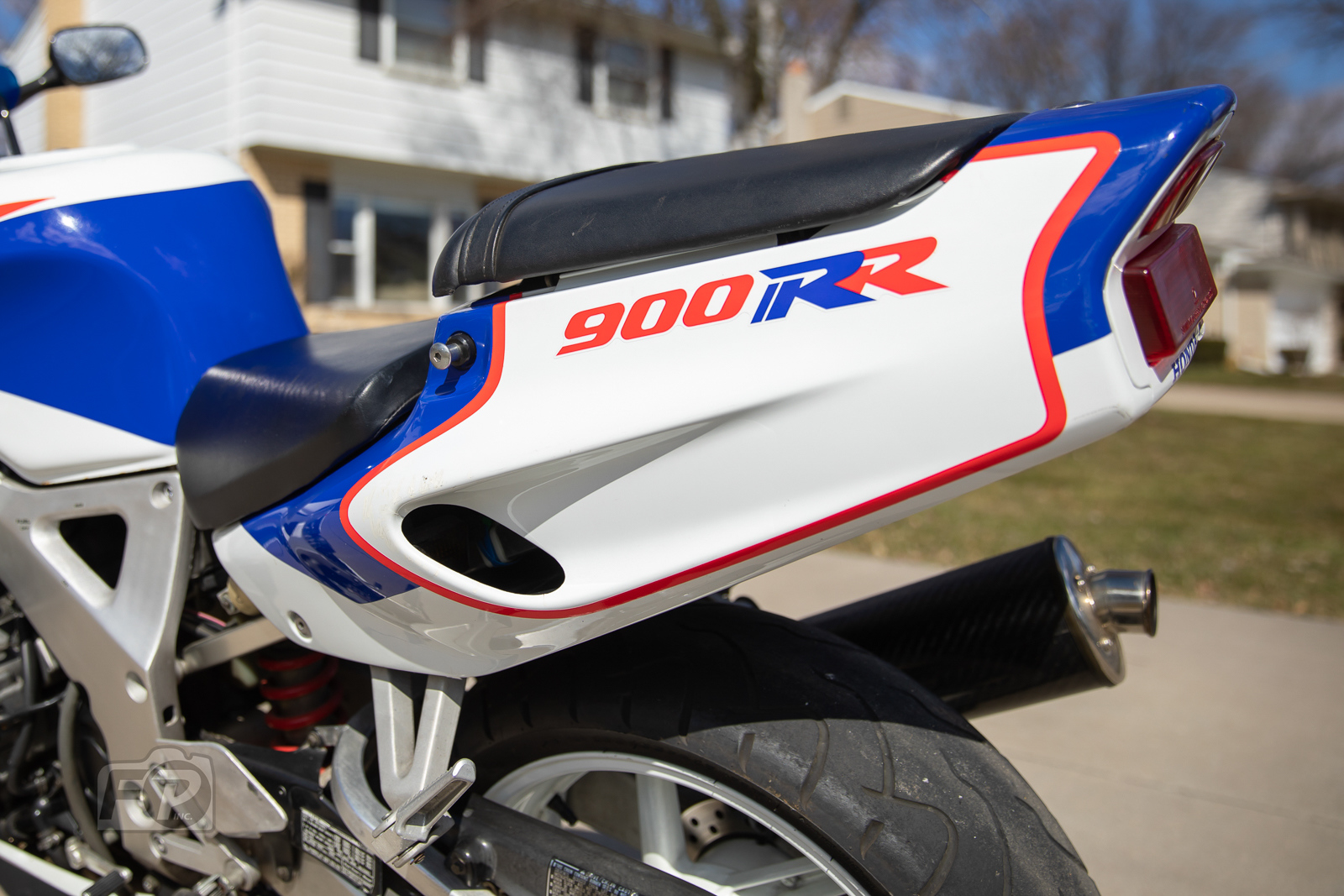 At the heart of the original Fireblade — which didn’t come to US shores until ’93 — was a 893cc in-line four which was essentially a stroked three-quarter liter mill with a 70mm bore. Though it wasn’t the most powerful engine of its day, the RR’s 124 hp, 65 ft-lbs of torque, and 160 mph top speed were nothing to scoff at, especially with its svelte weight.

A number of measures were taken by Baba and his team to ensure the Fireblade would hit its target weight. 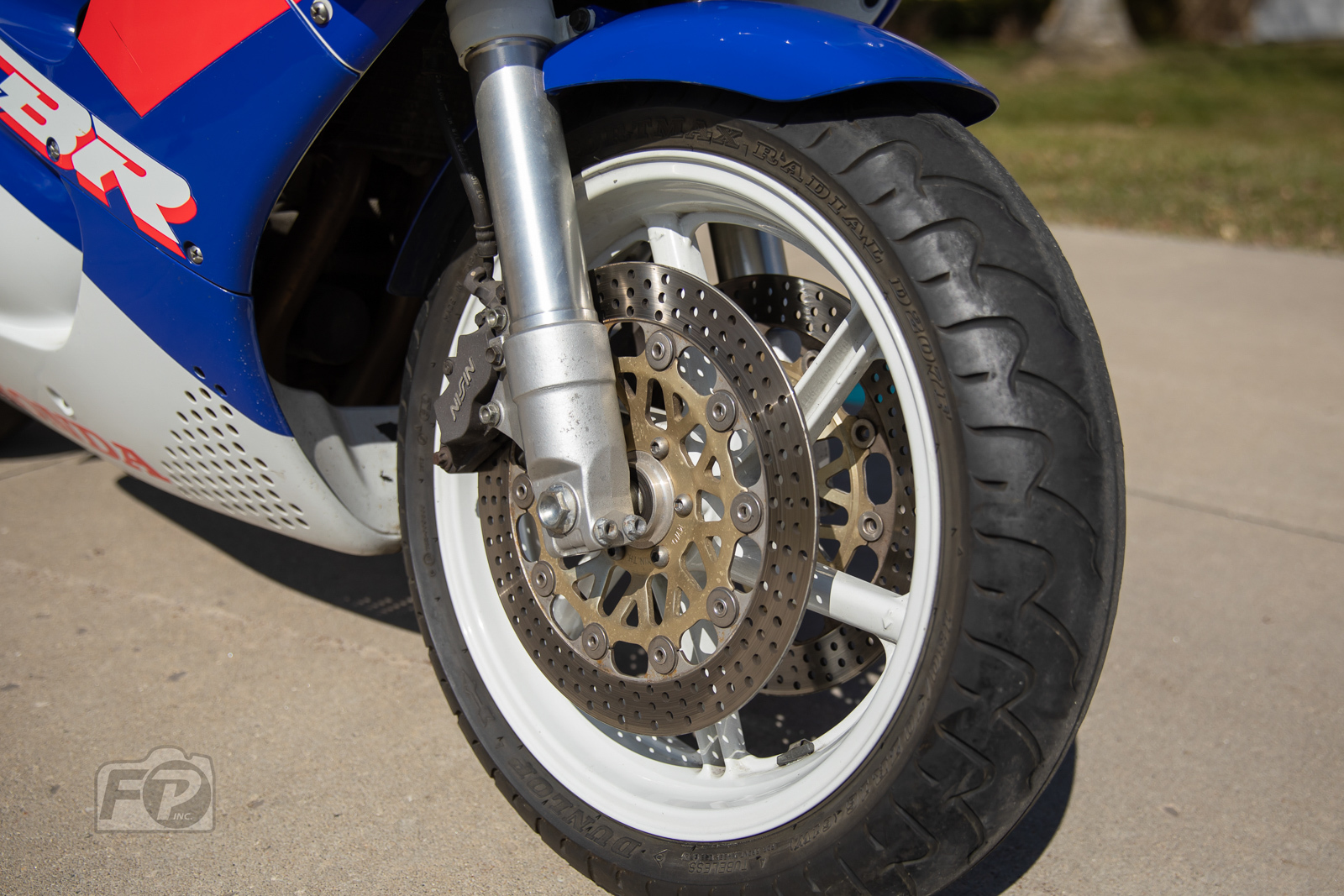 This included using a highly-developed lightweight frame, 16” front wheel, conventional forks instead of heavier inverted units (though the 900RR’s front-end was designed to look like an upside down fork) and even the Swiss cheesed-nose.

In the end, Baba-san came through, delivering a 900 that tipped the scales at around 450lbs wet. It was less than 10 lbs heavier than the CBR600, and a whopping 100lbs lighter than most of the open-class competition of the day! 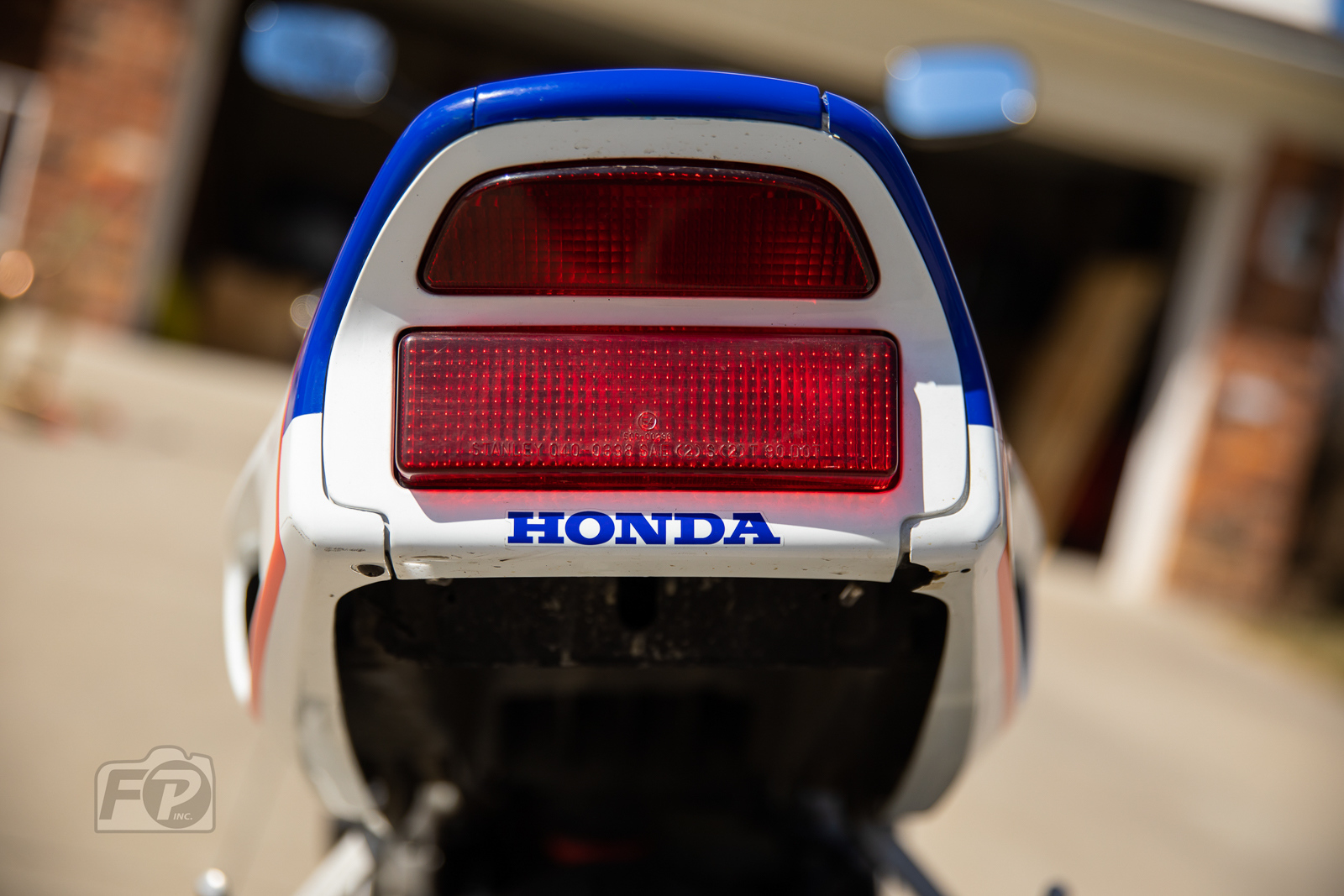 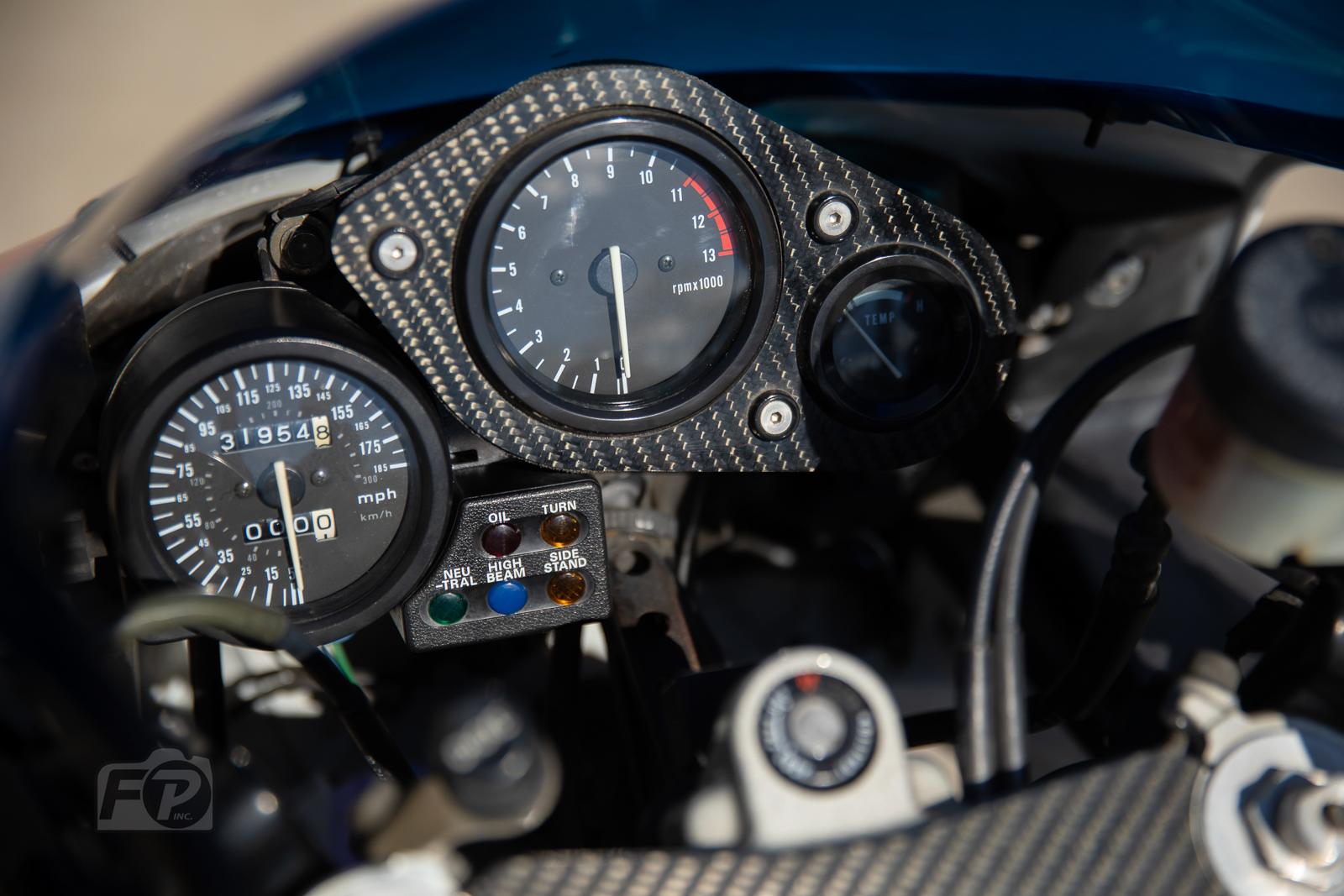 He acquired it recently for his son to move up to, but his son is in love with his current bike, so he’s going to let this one go.

Modifications include flush mount front turn signals, Woody Woodpecker stickers on the front fairings, removal of the license plate mount, carbon fiber covers on the dash and top triple, and a Micron 4-2-1 exhaust.

The gas tank is free of dents, though the clear coat has peeled a bit right around the gas filler opening. The tank has also had a tank liner applied by the previous owner.

The front of the rear seat has some wear. Photos of all known cosmetic issues are included in the album up top.

This first-year CBR900RR is ready to go right now as a rider, or it would make a great base for a restoration – whether you want to tackle that yourself or have our White Glove service do the work for you! 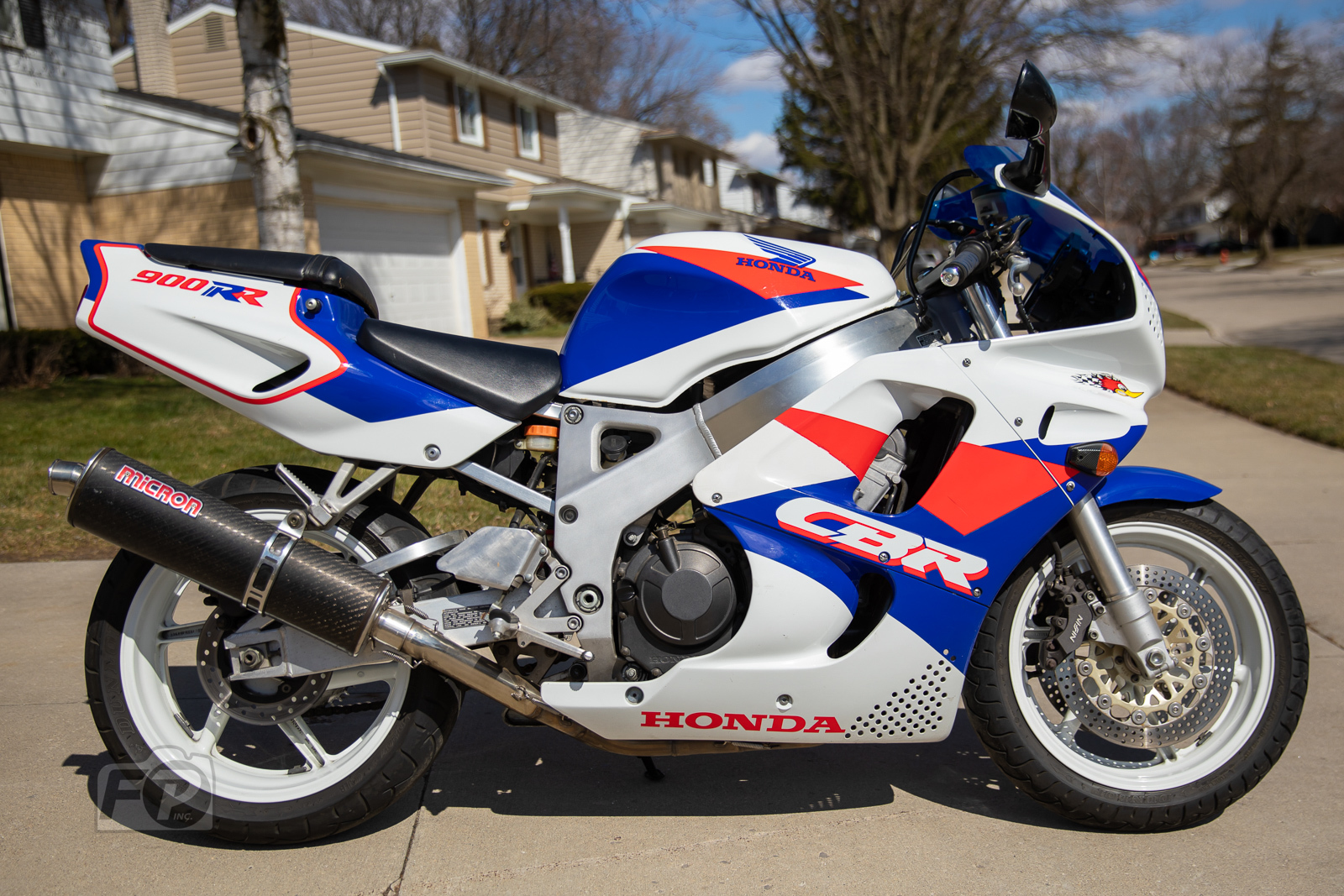 Got top dollar damn near for this piece, hope its as nice in person

I hope so too brother.

Does the owner have a buy it now price in mind! Can email me at jhndsmth1@yahoo.com with any details!