Click here for an CycleVIN Motorcycle History Report on this 1993 Honda CBR900RR. The seller notes that there’s a mileage discrepancy with the 11-09-2010 entry and that “someone at the DMV obviously made a mistake.” Additional photos are available here for your perusal.

At the heart of the original Fireblade — which didn’t come to US shores until ’93 — was a 893cc in-line four which was essentially a stroked three-quarter liter mill with a 70mm bore. Though it wasn’t the most powerful engine of its day, the RR’s 124 hp, 65 ft-lbs of torque, and 160 mph top speed were nothing to scoff at, especially with its svelte weight. A number of measures were taken by Baba and his team to ensure the Fireblade would hit its target weight. This included using a highly-developed lightweight frame, 16” front wheel, conventional forks instead of heavier inverted units (though the 900RR’s front-end was designed to look like an upside down fork) and even the Swiss cheesed-nose.

In the end, Baba-san came through, delivering a 900 that tipped the scales at around 450lbs wet. It was less than 10 lbs heavier than the CBR600, and a whopping 100lbs lighter than most of the open-class competition of the day! In ’94, the groundbreaking model had its steel upper cowl stay replaced with an aluminum piece, while a magnesium cylinder head cover took the place of the outgoing model’s aluminum unit. 1994 also saw a slight bump in engine efficiency, amongst other changes.

The seller acquired it one year ago and put approximately 1,000 miles on it in that time. The odometer now shows 15,284 miles.

During his time with the bike, he performed a restoration that combined NOS parts and period-correct modifications. The work included:

Every piece of plastic on the motorcycle was restored and repainted to original. The rear swingarm was serviced, with the bearings regreased. All the paint work was done by Marc Whitney (someone Iconic has used for several projects with great results). “The fuel tank was clean inside, but per Mark‘s instructions I sealed it anyway.”

Both wheels were sandblasted and powdercoated, given new wheel bearings, tires, valve stems, and were then balanced. There’s also stainless steel braided brake lines, as well as the front master cylinder and brake calipers from a CBR954RR. The front forks were completely disassembled, cleaned, fully rebuilt, and reassembled. The radiator was replaced with a NOS unit. 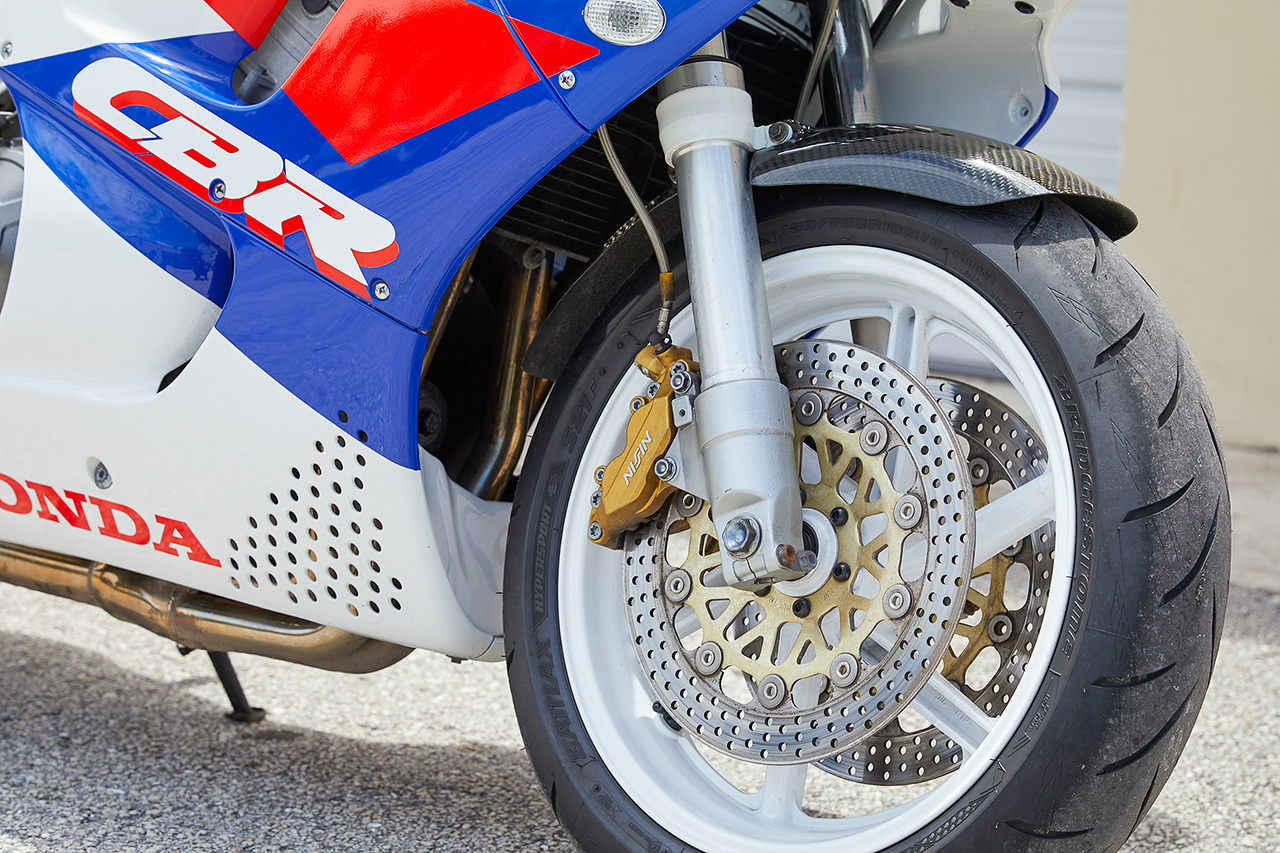 Polished frame. The rear shock was rebuilt. NOS petcock and fuel shut off. The coolant was flushed and oil was changed. 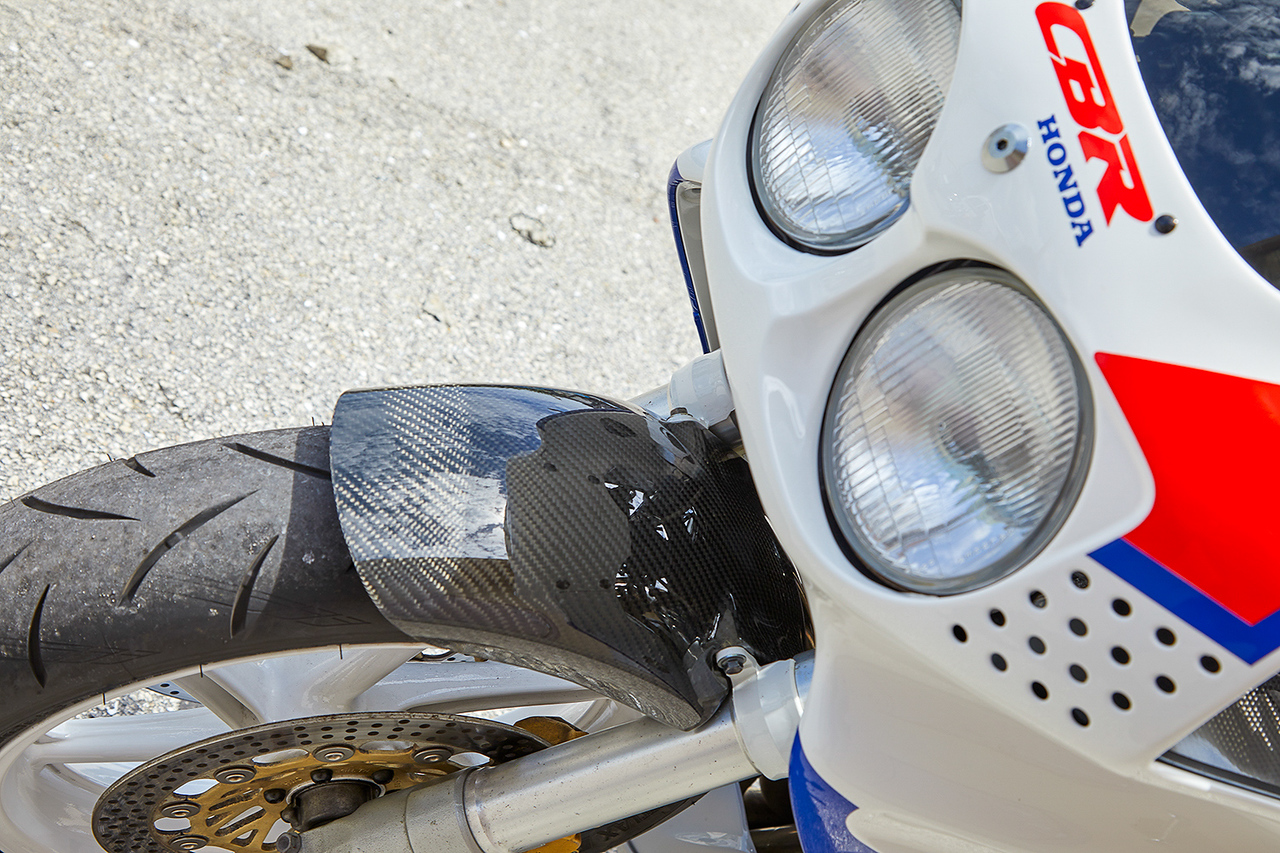 The main harness and other harnesses were all tested, cleaned, wrapped if necessary, and replaced in the factory location. The factory fuel pump was removed and bypassed. All of the brake master cylinders were rebuilt. New temperature sensor and wiring harness installed.

530 chain conversion. Supersprox sprockets – the front was replaced with a -1 “for a little more pick up.”

Per the seller, this bike “has been maintained and fully serviced amd in a private collection.” It was recently given a carb service – it’s ready to ride or show. The seller states that there are no cosmetic or mechanical issues, and this CBR is ready to go.

Classic, hard to find one in mint condition. I have the 93 black & red with 6k miles. it gets tons of looks and inquires when I’m out and about.

In what universe is this bike worth $8500?? And reserve is still not met of course. SMH

Be careful, Murph might want you to call him next.

So for everyone else, I WISH there was an IM option. But since there ain’t…

johnwebbmd, thanks for the kudos, but dammit man, me and you gonna go face to face on a 92 ZX-7!

Best of days my man!

If I find a good one, we can figure out a fractional share..lol

Alright, Johnwebbmd. Thanks for manning up and standing for what you believe!

Much respect! You (and everyone else) are still welcome to call!

Appreciate the kind words. I hope you get it, because it is one of the best looking (and riding) bikes out there. I have every other bike I’ve wanted in my garage, but I am still trying to get one of these and an early 90’s ZX-7 to add to the collection (prefer original). I had the CBR 900RR in 1993, bought another one in 2003, but sold both like an idiot..lol

does it make you feel any beter now I’ve bid like 4 times and still haven’t met the reserve?

What do I need to do to prove it?

Honestly, after I thought about it more.. I said.. well, maybe he is trying to see where the reserve is. So, I will admit I jumped the gun with a bad assumption. Please accept my apology.

And by the way johnwebbmd, you say I’m associated with the seller.

But, yet a bidder with your username has yet to appear!

Your invitation to call me personally still exists!

Any bidder is welcome to call!

This is my dream bike!

It looks like to me that this “Murph” is associated with the seller. The first person to bid, and starts at $4,500 on the day it was listed (suspicious activity #1). Then, tonight, the night before it goes off tomorrow, comes in and bids back-to-back with no other bids, $7,000, $7,500, and then $8,000. I think the site should pull this auction off. This is clearly not a real bid.

I want this bike!