Additional photos of this Ducati 926 (888) are available here for your perusal.

The seller of this fascinating Ducati shared a wonderful history on this bike in his submission, here’s what he had to say!

“This is a full factory Corse 926 that was built late 1993/early 1994 and rolled out of the Corse department in February 1994. The bike was bought by Joe Meakin in the UK, sponsor of Matt Llewellyn, via UK dealer Husky Sport. The bike was entered by sponsor Meakin Building Supplies in the 1994 British Superbike Supercup championship with Matt Lewellyn riding it. I recently spoke to the dealer who supplied the bike and he recalled Joe Meakin buying it through them. The original fax order is in the bike’s history file confirming the frame number and original engine case number.”

“Late in the 1994 season, Matt raced in the Donington Park UK World Superbike race and picked up his only 2 points in WSB that year. Matt finished an excellent 4th place in the British Supercup championship. At the end of the 1994 season the bike was sold and bought by Rory Mac, owner of Peachurst Bathrooms and sponsor to up and coming North West road racer, Simon Beck. Simon took the bike to the 1995 TT, achieving a 3rd place in the Formula 1 race at 116.67mph – the only Ducati 888 race bike to achieve a podium finish at the TT, and the quickest recorded race time for a factory 888. The race is captured on the 1995 Duke video, which will come with the bike, with some spectacular wheelies and action from Simon Beck, particularly at Ballacrye! (There has been a faster ‘888’ racer recently in the classic TT but this is one of the silhouette bikes and runs a modern 996 engine with 749R and other much later engine parts).”

“After the F1 race, the engine was taken out of the bike to be serviced ready for the Senior TT a week later. Simon was certain on that performance that he could win the Senior and was in determined mood. His father took the engine on a flight to the mainland UK and was given special dispensation to have it in the plane cabin with him as ‘hand luggage’. Once landed, John Hackett of JHP (now JHP Ducati Coventry) rebuilt the engine in full. At this time, John was working almost as an extension to Ducati Corse’s own workshop, building factory race engines. Taking no chances after the 226 punishing race miles inflicted on it, John changed the engine cases, original number ZDM888W4/002428 for brand new ones so they were not going to be a crack risk for the Senior TT race. As was the case with race engine case swaps, the new ones are not numbered. Simon thanked John for his swift work to get it back to the Island in time for the Senior by sending him a signed photo of the bike in action. I have a copy of that in the information file also.”

“Senior race day came and after a promising start, the clutch started to slip and Simon finished in 9th place overall. The bike then went off to the Ulster GP to race in early August, a few weeks after the TT. While Simon was entered in the race as evidenced by the Superbike race programme page copy I have, I can find no evidence of him actually taking part and after the UGP Bike Week was over, the 926 Corse was retired from racing. The bike still wears the race tyres from that last race.”

“The bike was taken back to the sponsor’s showroom and spent the next part of its life on display among the bathrooms for sale. It stayed here for quite a few years until Peachurst Bathrooms stopped trading. At this point the bike was bought by one of Simon’s old mechanics who set about getting it running again. While the bike still looked as it did after the UGP, the seals, pipes and other perishable items all needed replacing and while this was being done, the frame was shot-blasted and re-painted. The masking of the VIN during this shotblast/repaint process was not very good but the original VIN of ZDM888S*002195* is still visible and photos of that have recently been verified by the Ducati Museum in Bologna.”

“Once the bike was running, I managed to buy it, the bike that introduced me to Ducatis nearly 20 years previously when I first saw Simon round Quarterbridge in the Isle of Man on it and the noise and sight blew me away! With a Ducati, particularly a race Ducati, I was not going to run the bike until it had a thorough assessment and service by John Hackett, so the bike went off the JHP to be fully checked over and if necessary recommissioned in full. JHP stripped the engine and found the first recommissioning had not been a deep one as there was sludge in the coolant channels in the heads and this was pressurising the system and causing coolant to be lost. The heads were completely stripped fully vapour blasted and restored – I have the before and after pictures of work in progress. After that a full service was done, belts, fluids you name it and the bike brought back to 100% running order. Even though it had done no race miles since John last rebuilt it 20 years previously, it was kind of fitting that he got to rebuild it again all these years later.” 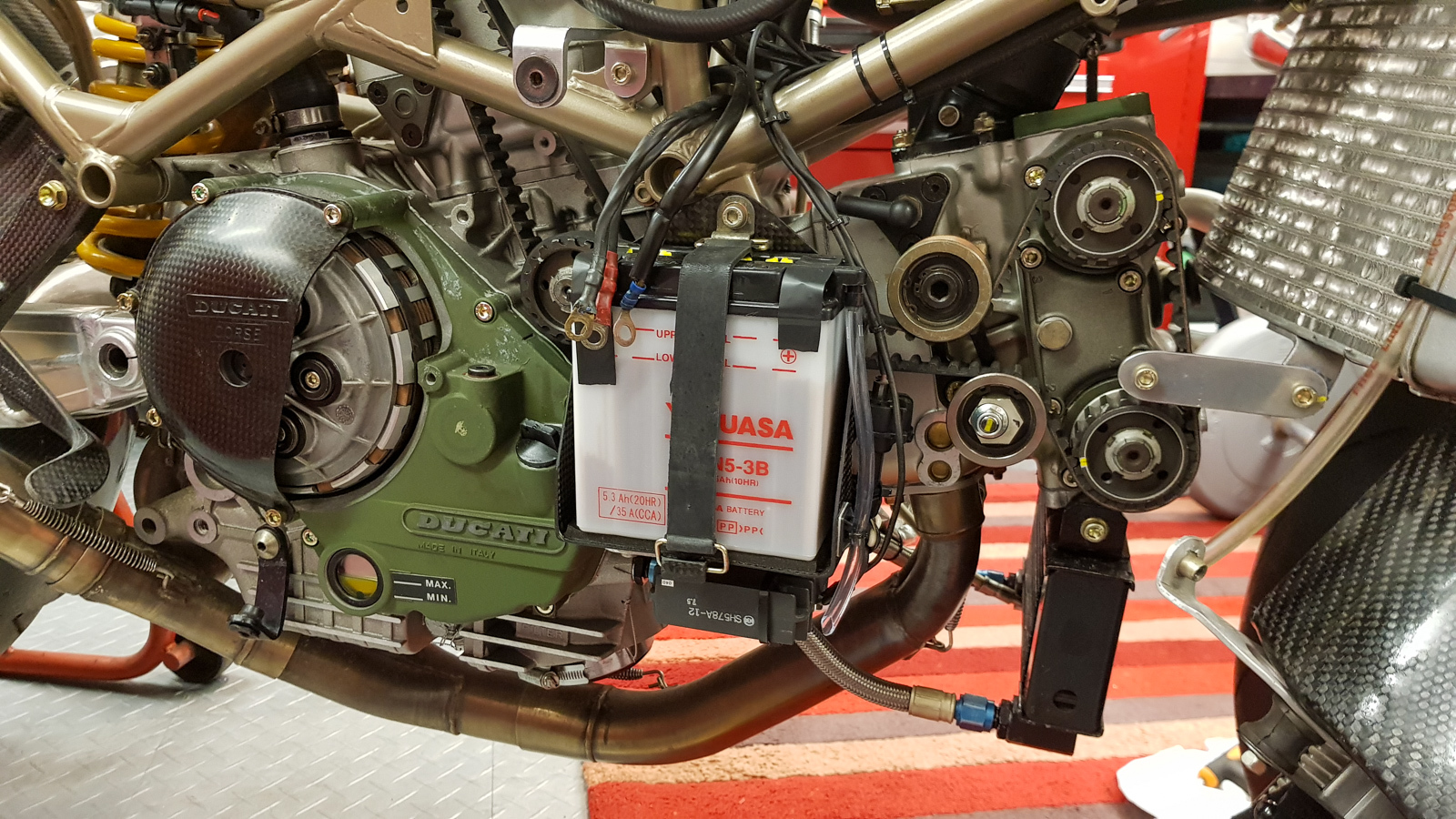 “The bike’s history is traceable from the day it rolled out of the factory to today and I have confirmation from the factory that it is correct and as it should be. The factory also warned me not to do a full nut and bolt restoration as I was thinking about as it would remove all of the provenance of the bike, which is essentially the same bike that left the 1995 UGP, excepting the repainted frame. The factory told me “Leave it as it was in 1995; start it sometimes, check the engine, check the ignition”.” The seller has shown us conversations about this bike he’s had with Livio Lodi, the curator of Ducati’s factory museum.

“Over the course of my ownership I’ve been told that the bike has the “wrong coloured rear suspension hoop”, it “has the wrong airbox parts” or even that it “has an SP5 frame”. To be clear this is a 1994 926 Corse, the last evolution of the racing 888s and it IS different to 1993 models and earlier. The airbox design is unique to these 32 bikes, the rear suspension hoop was the same colour as the frame out of the box, which can be evidenced in period race photos and other reference pictures like those taken by experts like Phil Aynsley. Also, the frame is 100% 1994 926 Corse. The frame number is intact despite the shot blasting and repaint, the frame modifications and extra gusseting are all as the 1994 Corse should be including the removable central spar and this has been verified by the factory themselves. The evidence of this I can also provide.”

“When the bike was run at the TT, minor changes had to be made to cope with the TT course. Early in the campaign the Micron carbon exhausts used in BSB blew apart due to the pressure of the exhaust pulses over long flat-out periods of riding. These were replaced with alloy silencers as can be seen in the TT photos and new carbon ones replaced those after racing was completed. Similarly, the small carbon fibre exhaust straps and radiator mount plates were replaced with alloy items, more certain to survive the punishment of 550+ racing miles on the Island. The radiator plates are still in place, part of the provenance of the race machine and although I have the alloy exhaust straps I replaced them with original carbon ones as they are on show, but the rest of the bike is as it left the TT in 1995 with the advice from the factory to leave everything alone and as it was when raced at the TT.”

“The bike comes with the history all referenced above, tracking its story from February 1994 to now, plus its original 1994 rear paddock stand, and the TT alloy silencer sleeves seen in the TT photos and a few other bits and pieces including the Ducati Owners Club GB 2020 calendar where it features as the November bike. Note that as this is a full factory racing machine, not built on the production line but in Ducati’s Corse racing department, it has no road registration documents or titles. This is a thoroughbred factory racer and a rare piece of TT and Ducati race history.”

Cosmetic Blemishes:
The seller notes that”it is as it left its last race of 226 miles” so there are minor issues “but is otherwise remarkably good.” 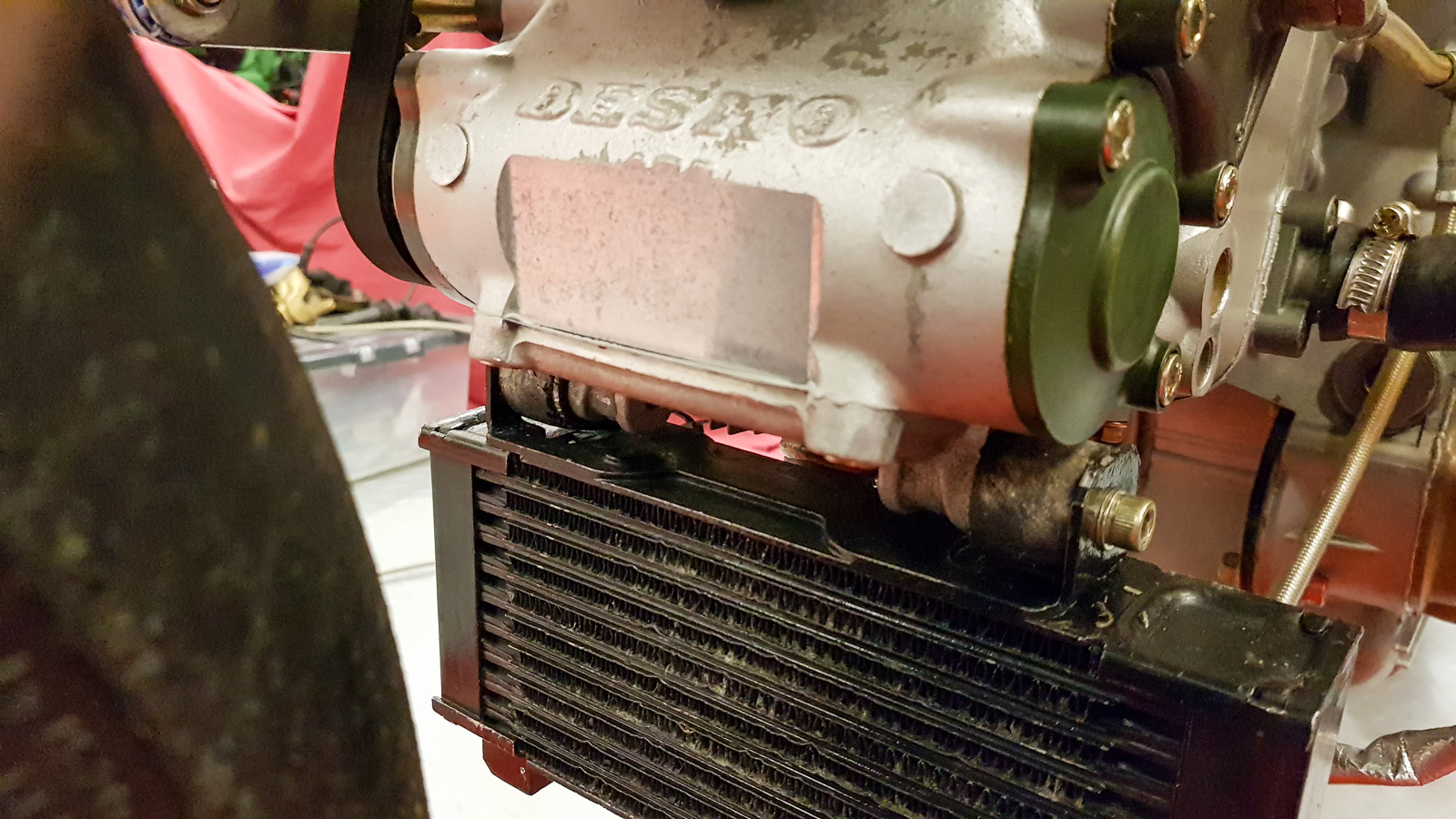 Specifically, he points out:
Minor corrosion to the clutch case (green).

Marks to the generator housing from racing (sand coloured).

A small mark on the “Campione del Mondo” seat sticker under the word “Superbike”.

The seller states that there are no known mechanical issues and it is “in perfect running order” with regular services by JHP. He’s letting it go as “race injuries mean it is too much for me to handle and it deserves to be paraded and shown to the public, not hidden away in my house.” 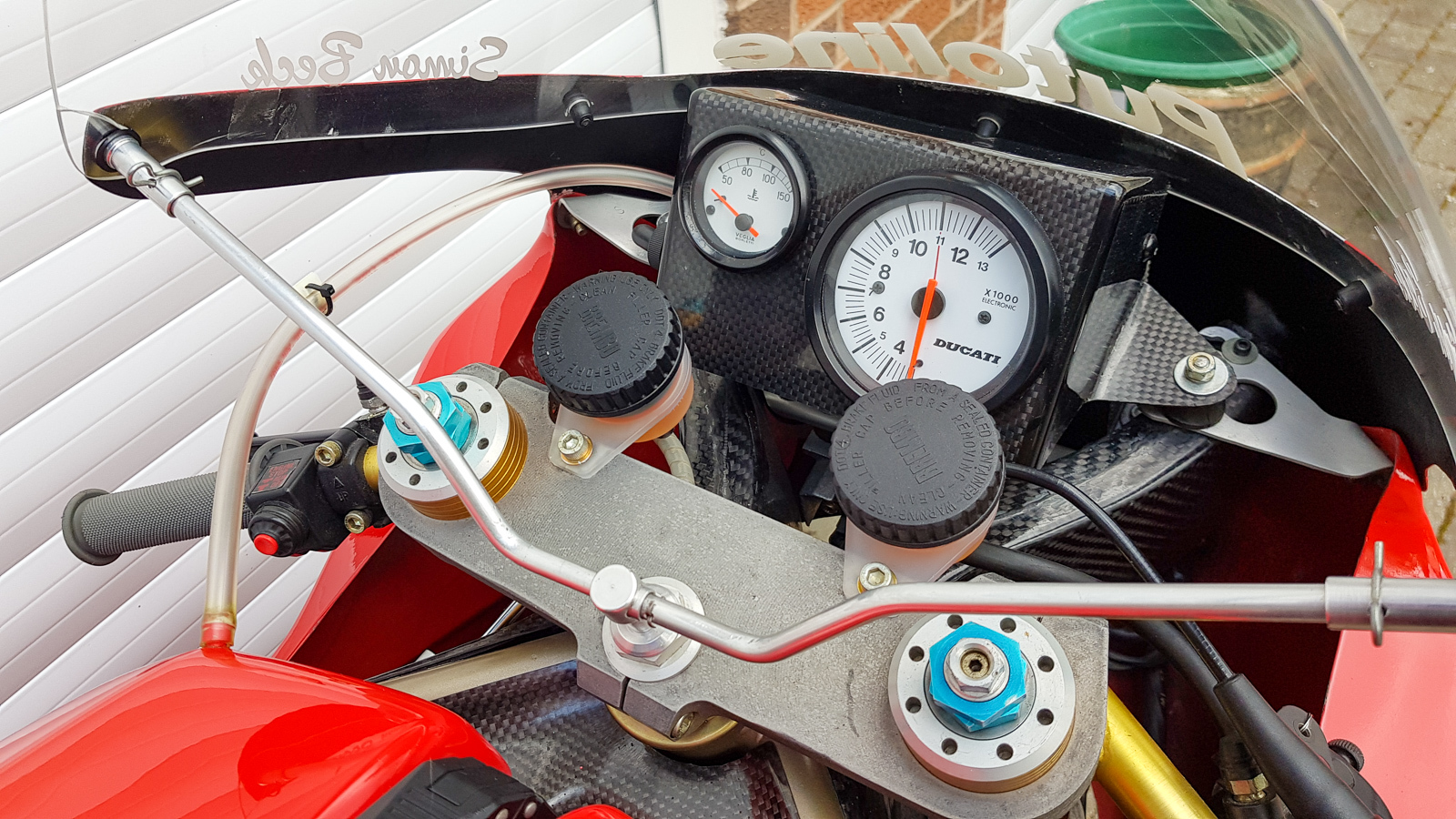 Currently located in South Cheshire, England, UK, this Ducati is offered on a Bill of Sale only. Have any questions about this listing? Let us know in the comments!