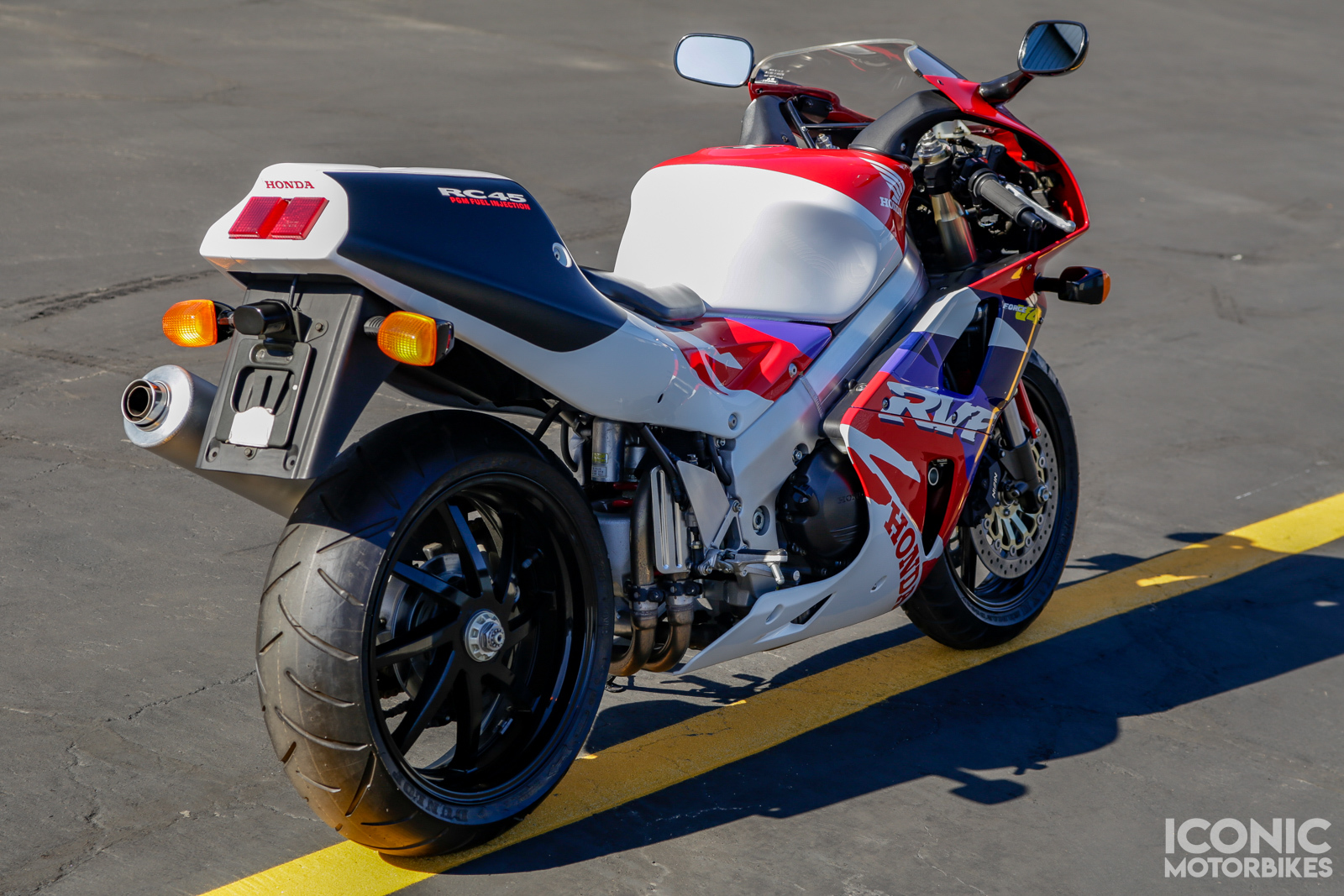 Like the RC30, the RC45 was powered by a liquid-cooled, 749cc, DOHC, 16V, four-stroke, 90-degree V4, though unlike its carbureted predecessor, the RC45 was bestowed with tunable electronic fuel-injection borrowed from the development of the NR750. The bike also benefited from knowledge and experience gained in Honda’s RVF factory endurance race program. The RVF’s V4 boasted low-friction pistons, ceramic and graphite impregnated cylinder liners, titanium conrods, and close-ratio six-speed gearboxes with undercut shift dogs. 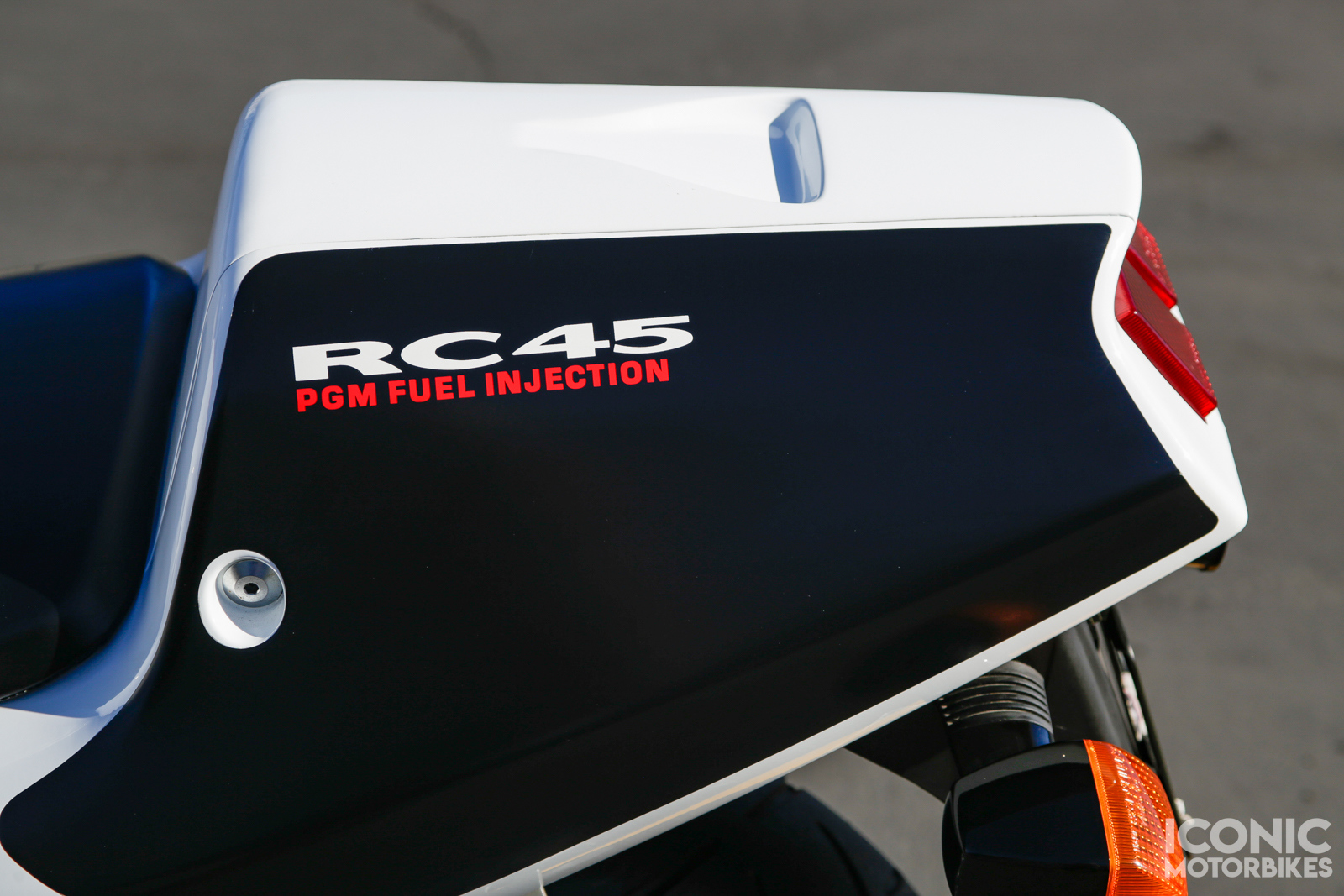 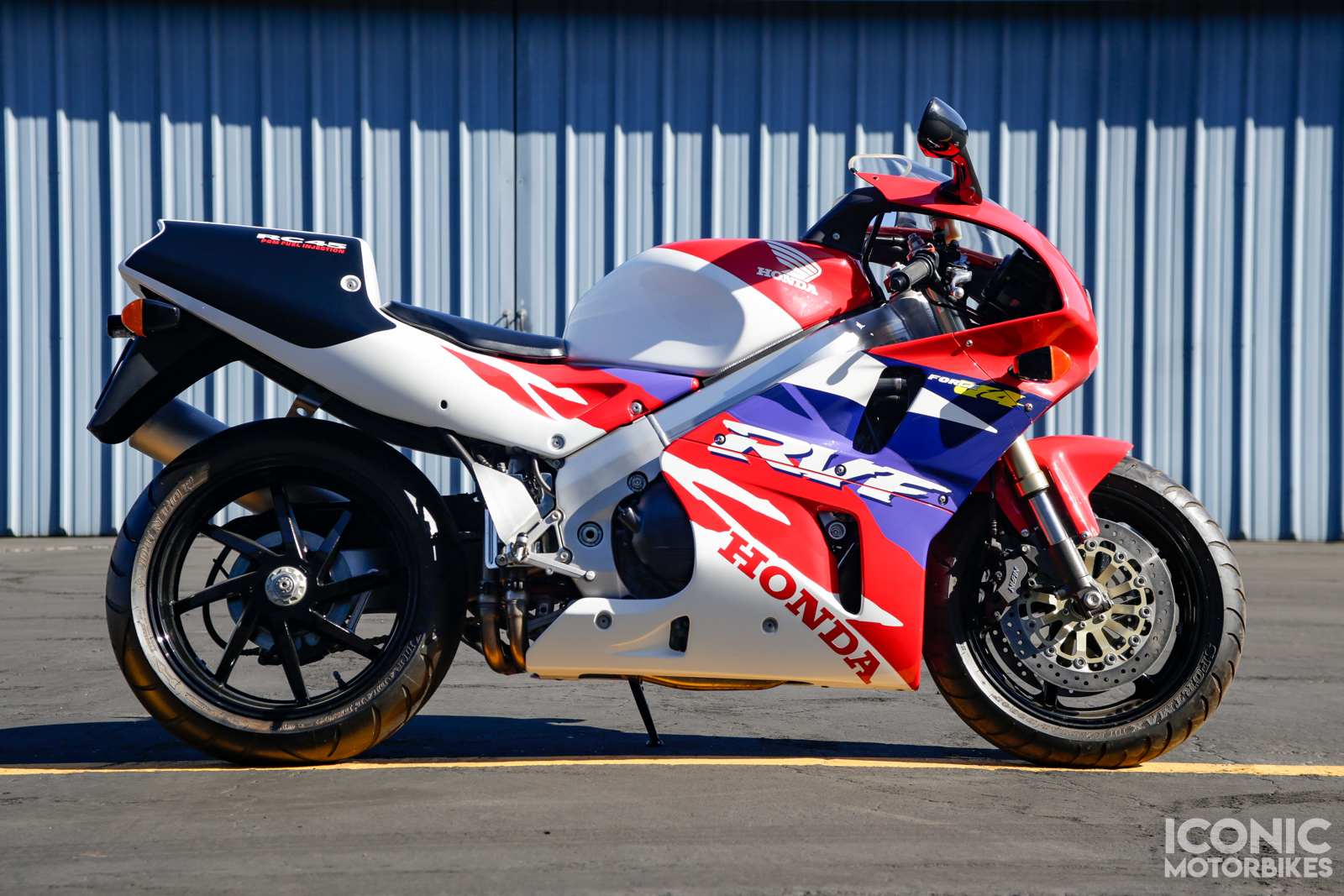 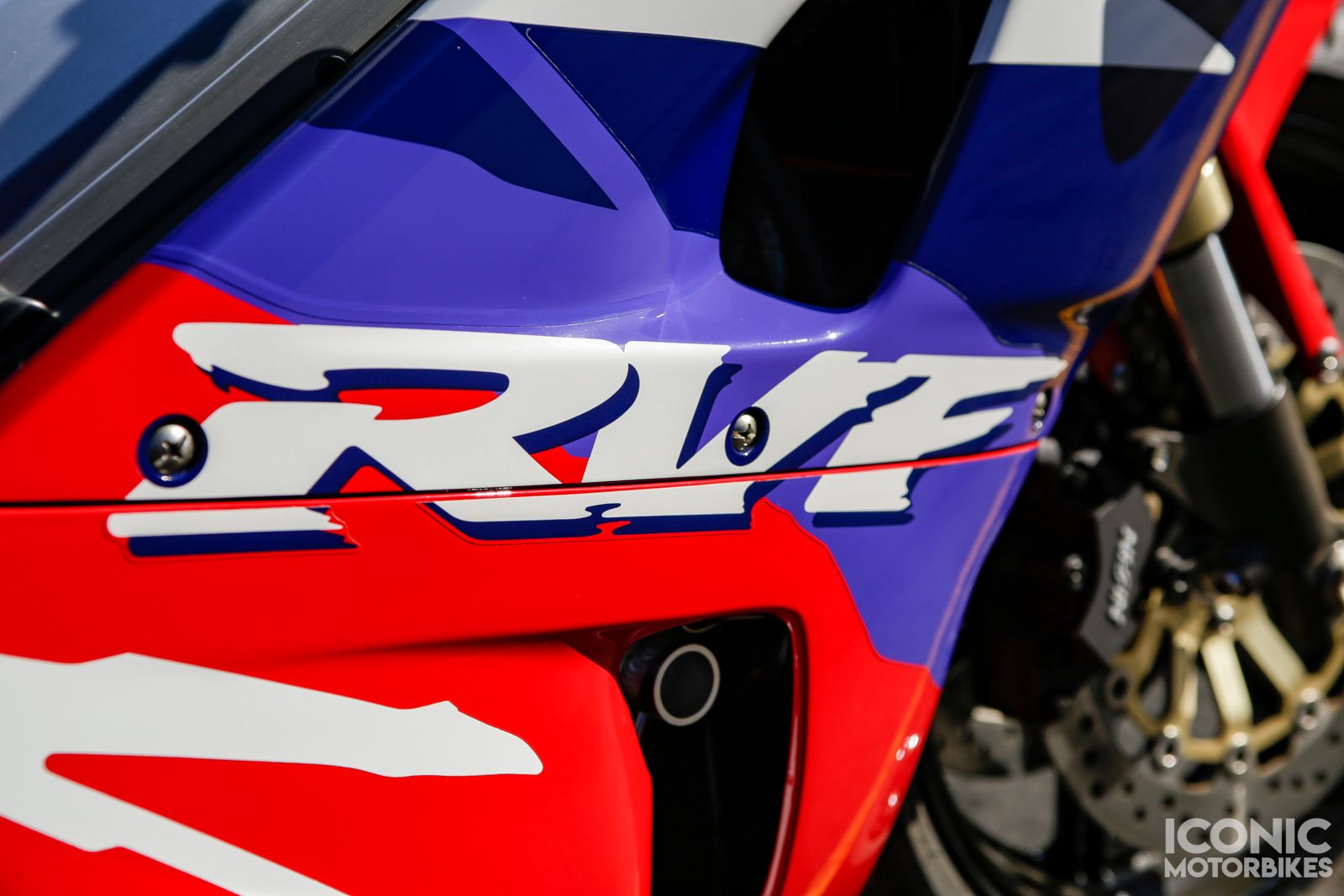 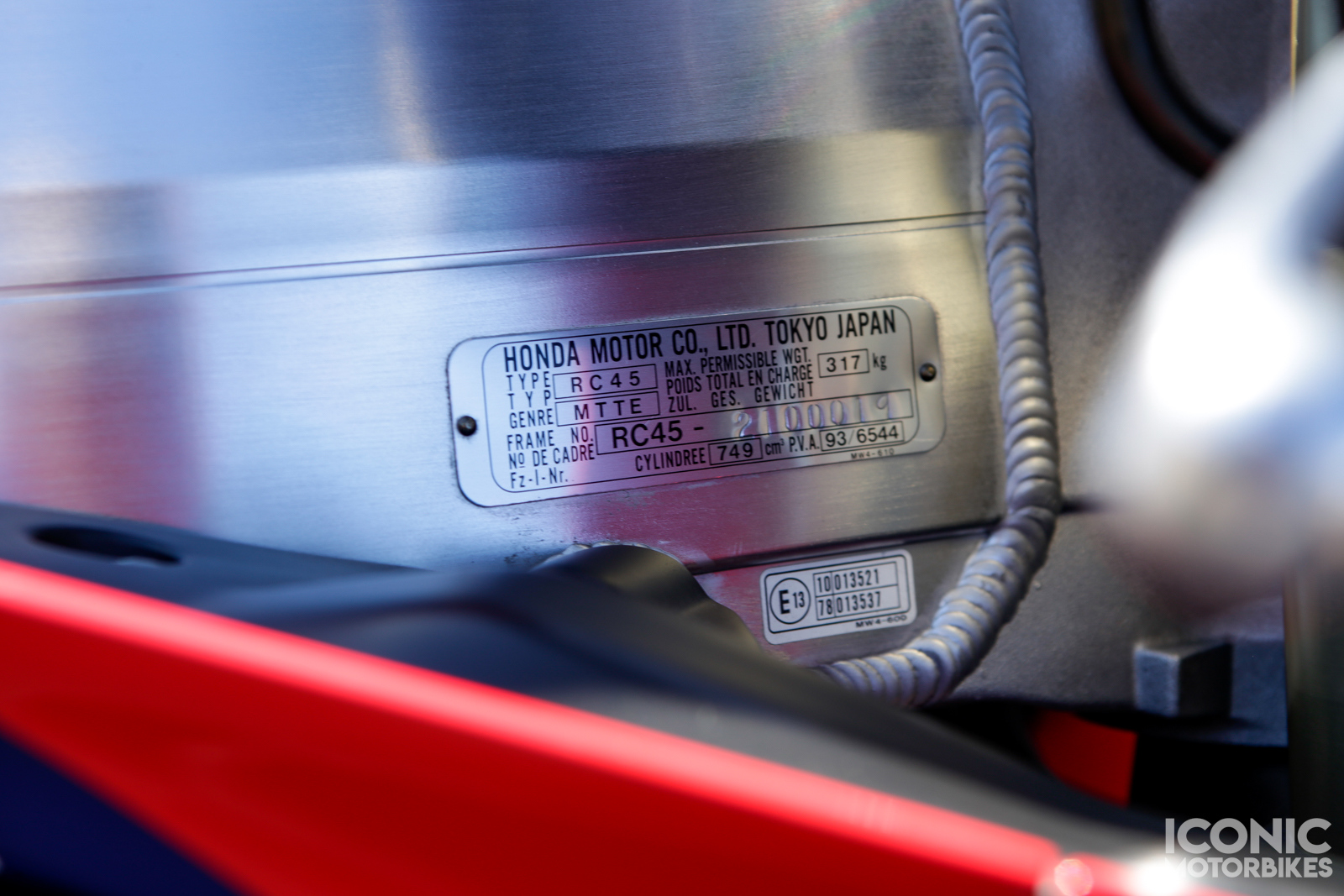 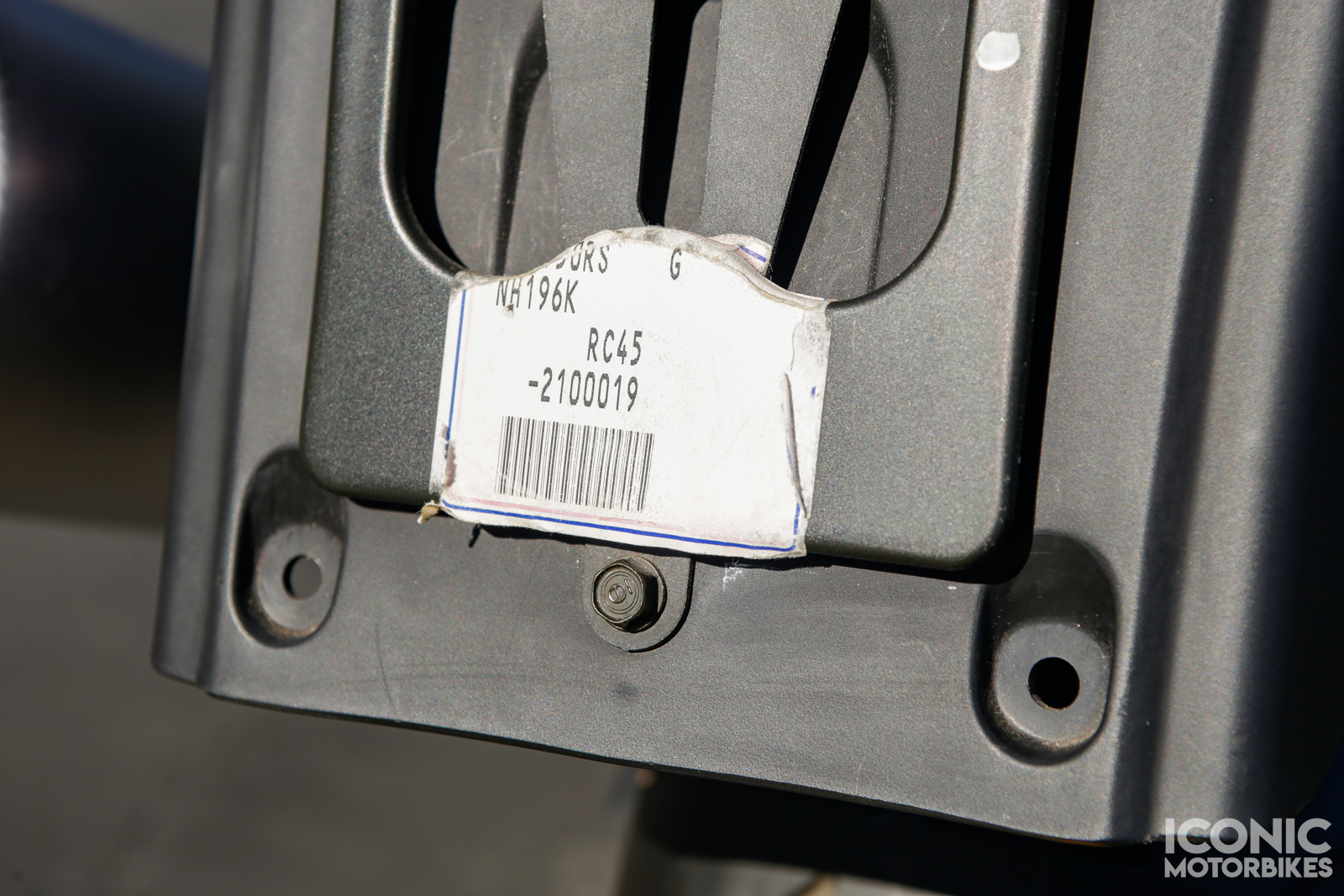 The bike comes with impressive documentation of the bike’ history, some of which we will summarize here: ‘This particular bike was produced for the German market specifically. This is shown on the “Frhzeugbrief” as the bike was governed to 155 mph and 100 bhp, as per German law at the time. 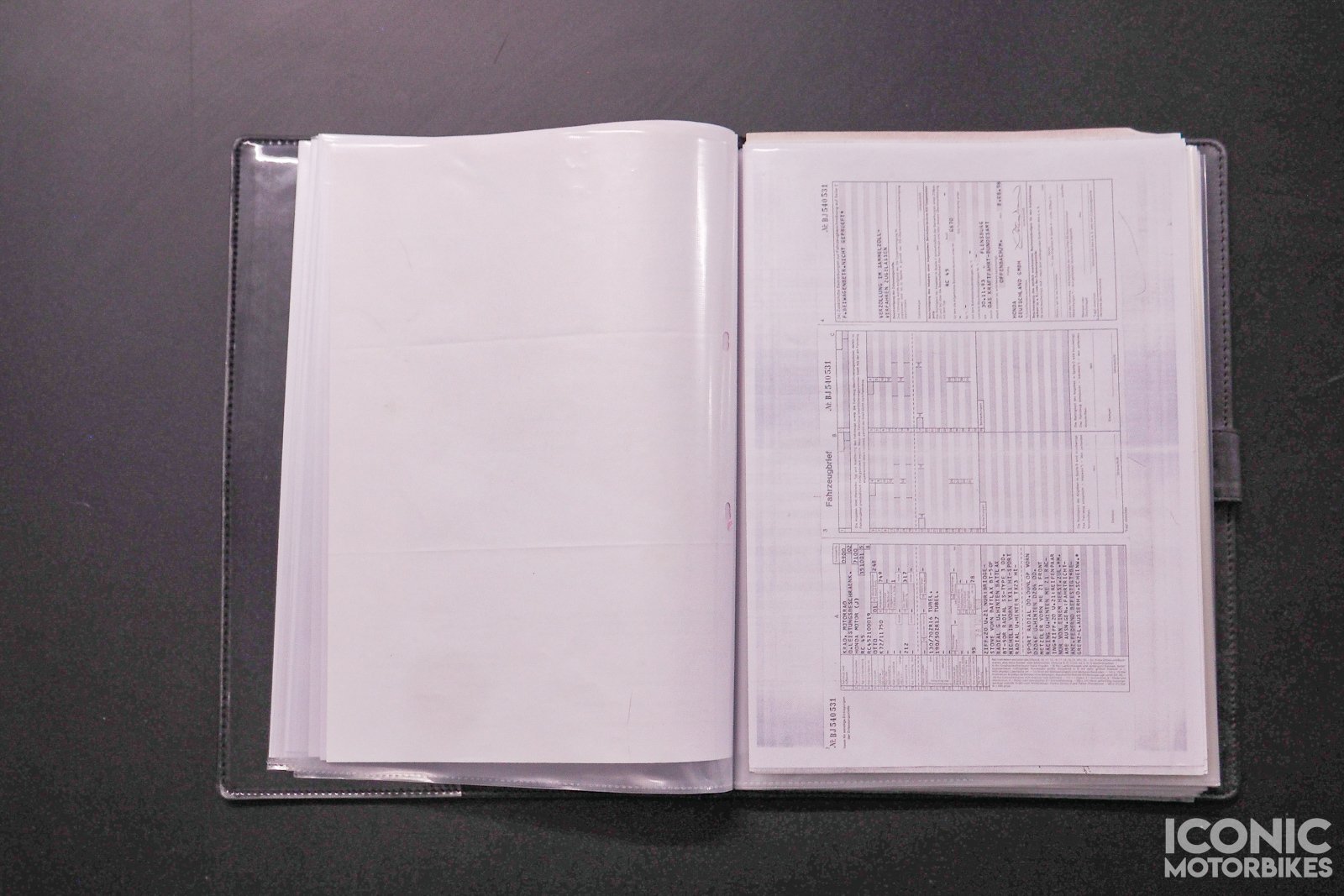 It seems that the bike’s build dates to November 30th, 1993, making it a 1994 model. As limited numbers of RC45s were made for Germany, it took until August 8th, 1996 to gain German type approval. This type approval was granted to Honda Germany at Offenbach. It appears that Honda Germany retained the bike…it is clear via the Abmeldebescheiniggung document that in March 3rd, 1999 Honda Germany chose to register the bike. This may have been an enforced action due to German laws at the time. The bike was PDI’d just a day before Honda registered by Reinhold Dippold (the supplying dealer) on March 29th, 1999 as per the Service Book. Interestingly, the “customer” for the bike was Honda Germany at Offenbach. 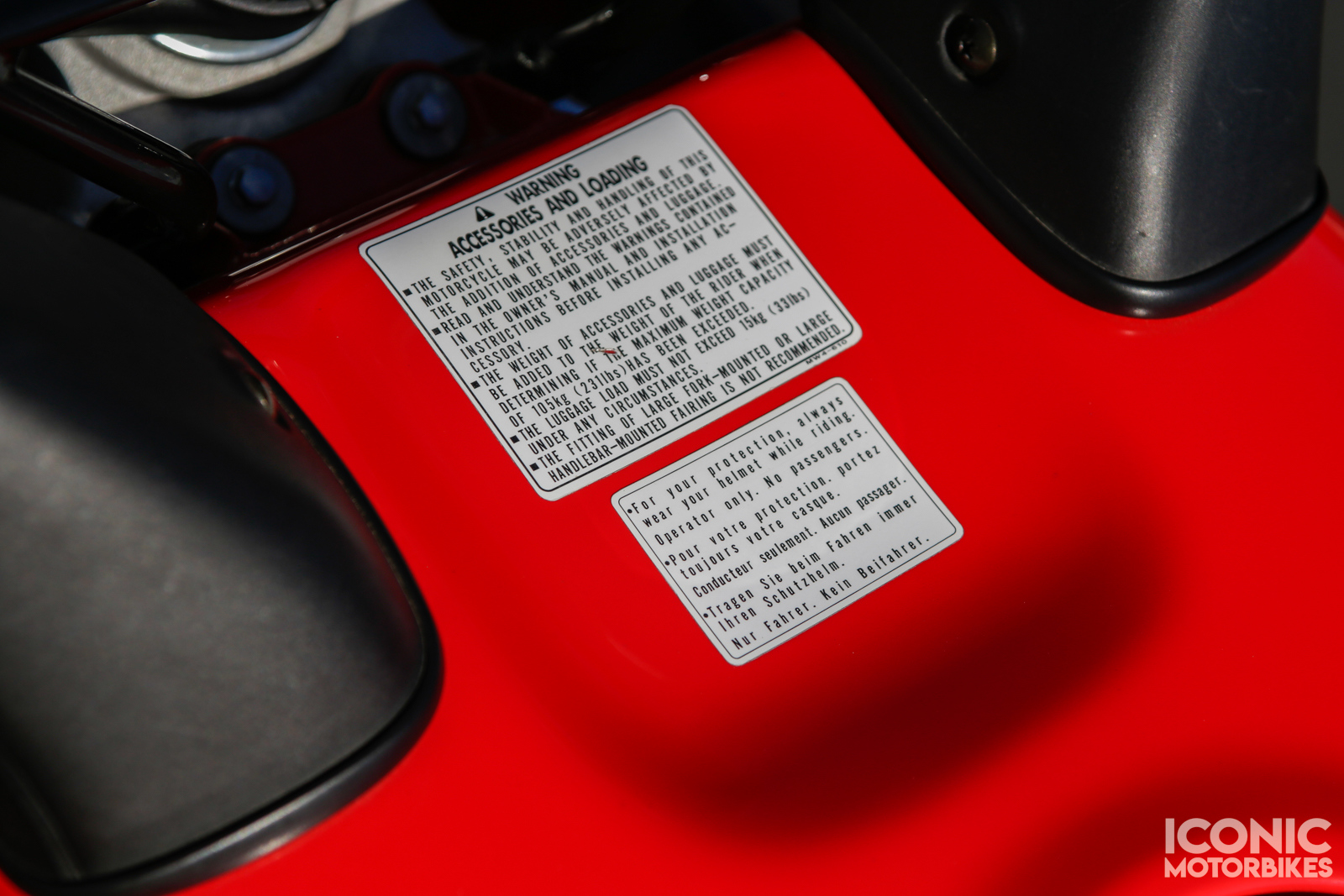 It appears that Honda Germany retained the bike until asking Reinhold Dippold to sell it for them in 2002, which coincided with their move to Frankfurt. The old site was then used by Honda Research and Development. Reinhold Dippold advertised the bike as “New” as per the ad copy. 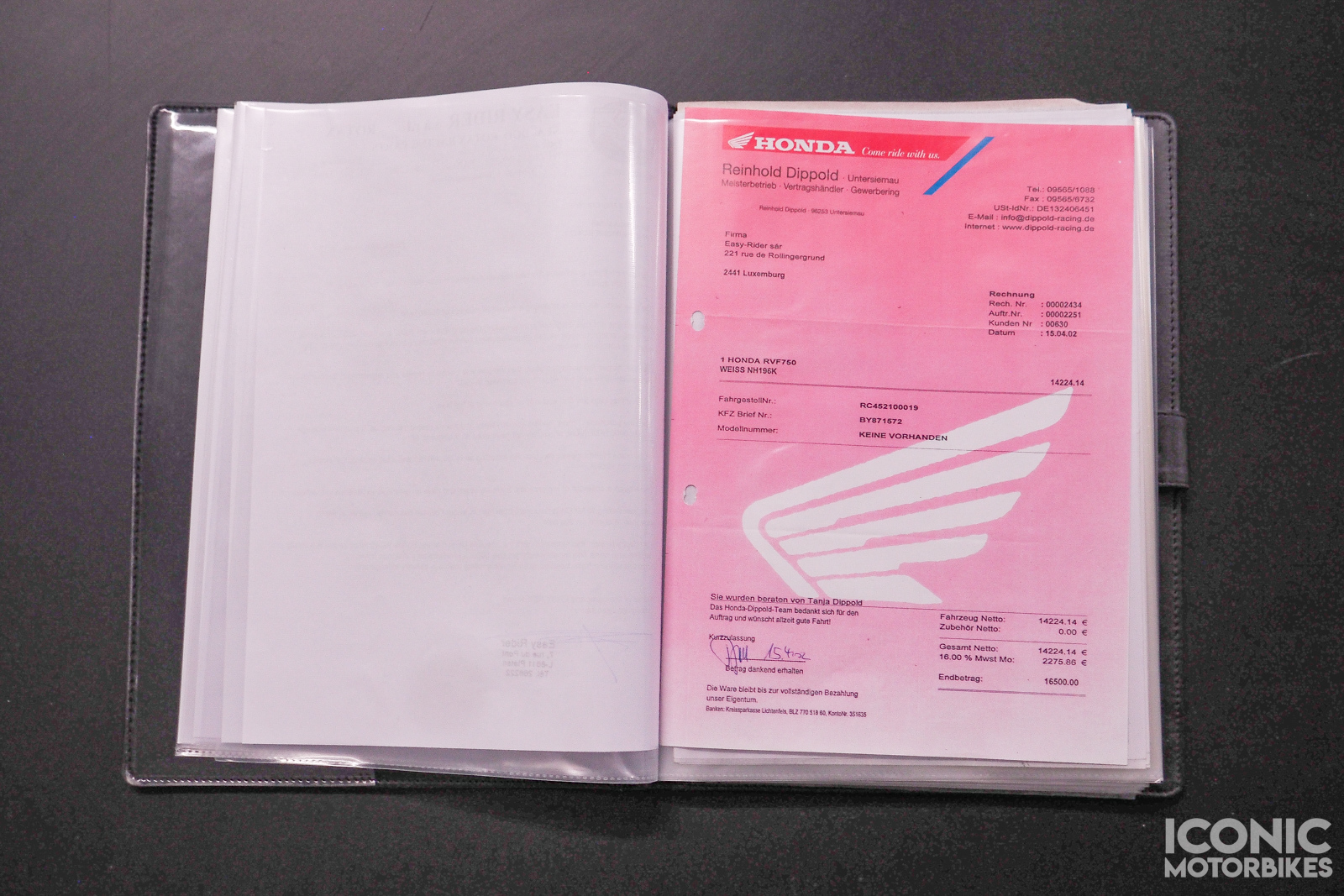 On April 15th, 2002, Jean-Marc Souvignier of Easy Rider in Luxembourg (himself an owner of several collectible Hondas such as a RC30, NR750, and RS500 GP) acquired this bike from Honda Germany through Reinhold Dippold. Jean-Marc registered the bike in Luxembourg and the bike went through a MOT inspection on January 10th, 2006 with a recorded mileage of 1km.

Jean-Marc sold the bike to a Chris Saunders of the UK on January 27th, 2017. The bike then ended up with the Bike Specialists in Sheffield, UK, and Iconic sourced the bike for its current owner in April 2022. The current owner’s intent was to have us make it a runner so that he could ride it.

With that in mind, we sourced a used set of RC45 wheels so that he could keep the pristine wheels and original OEM tires for display purposes. We also sourced a used Honda CBR600F2 17″ wheel as the original front wheel is 16″ for better tire choices, then had the F2 wheel powdercoated to match. The sale includes all three wheels. 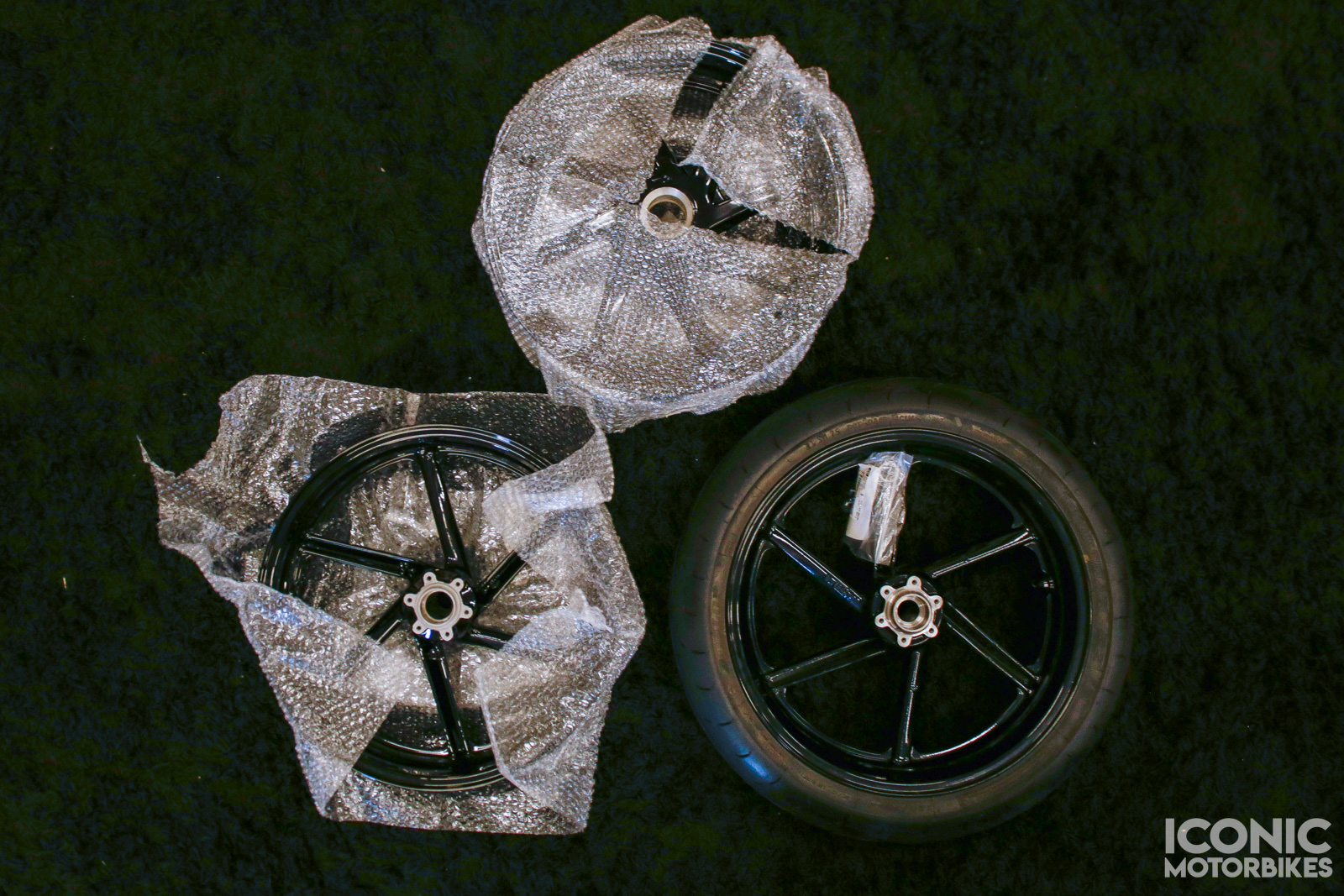 He has decided to sell it and focus his collection on race bikes with history instead.

Modifications:
This RC45 is completely stock. 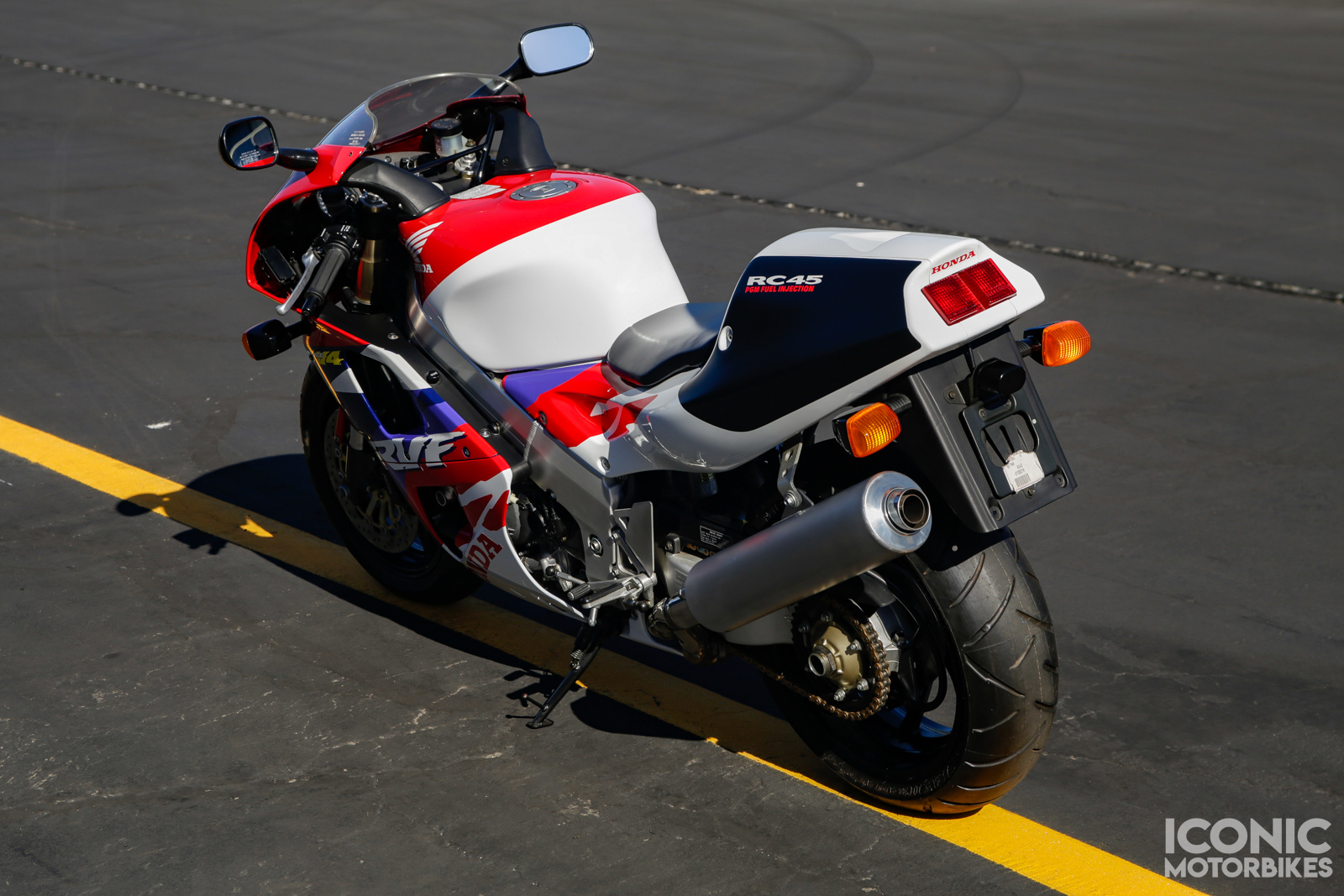 The sale includes the original stand. 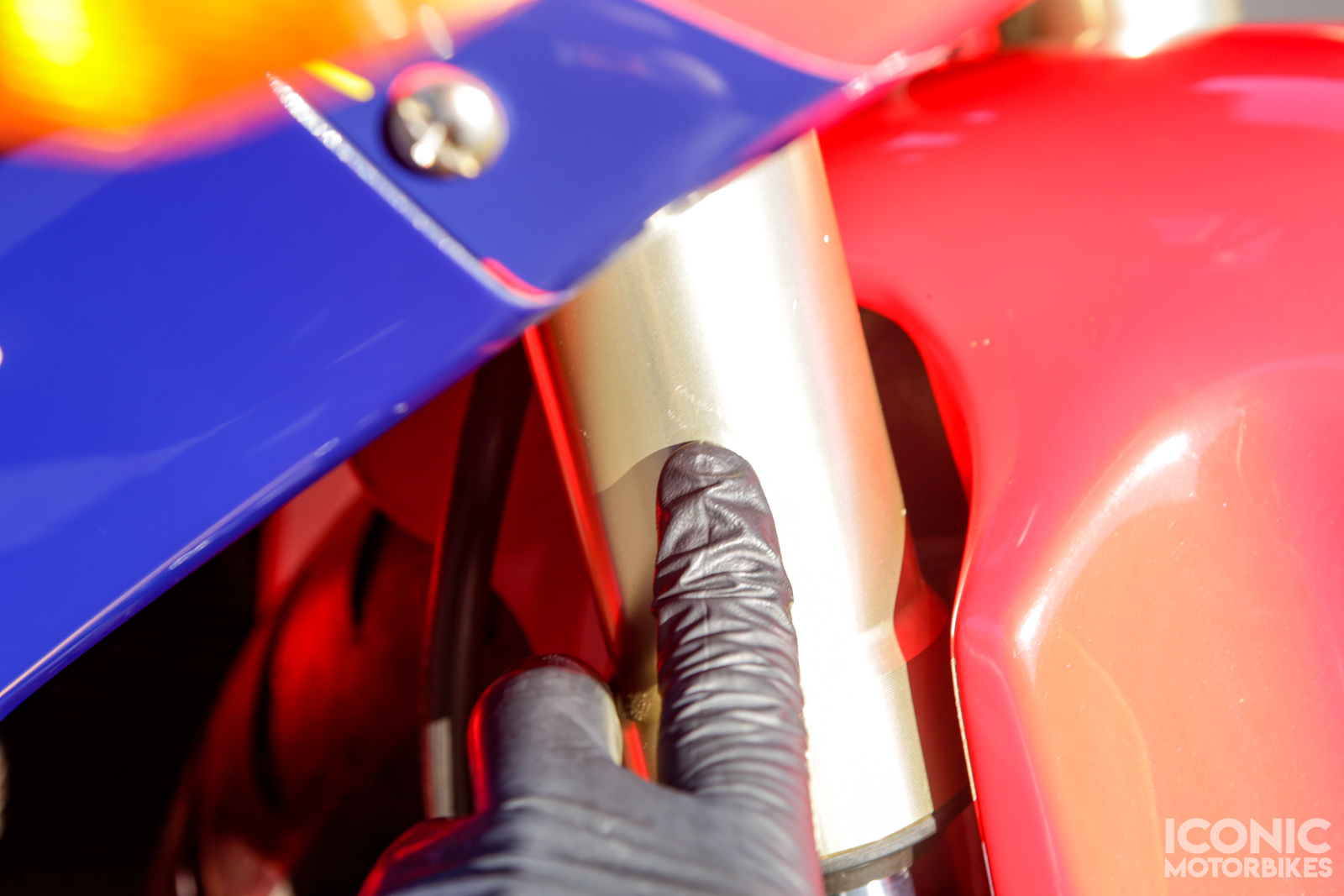 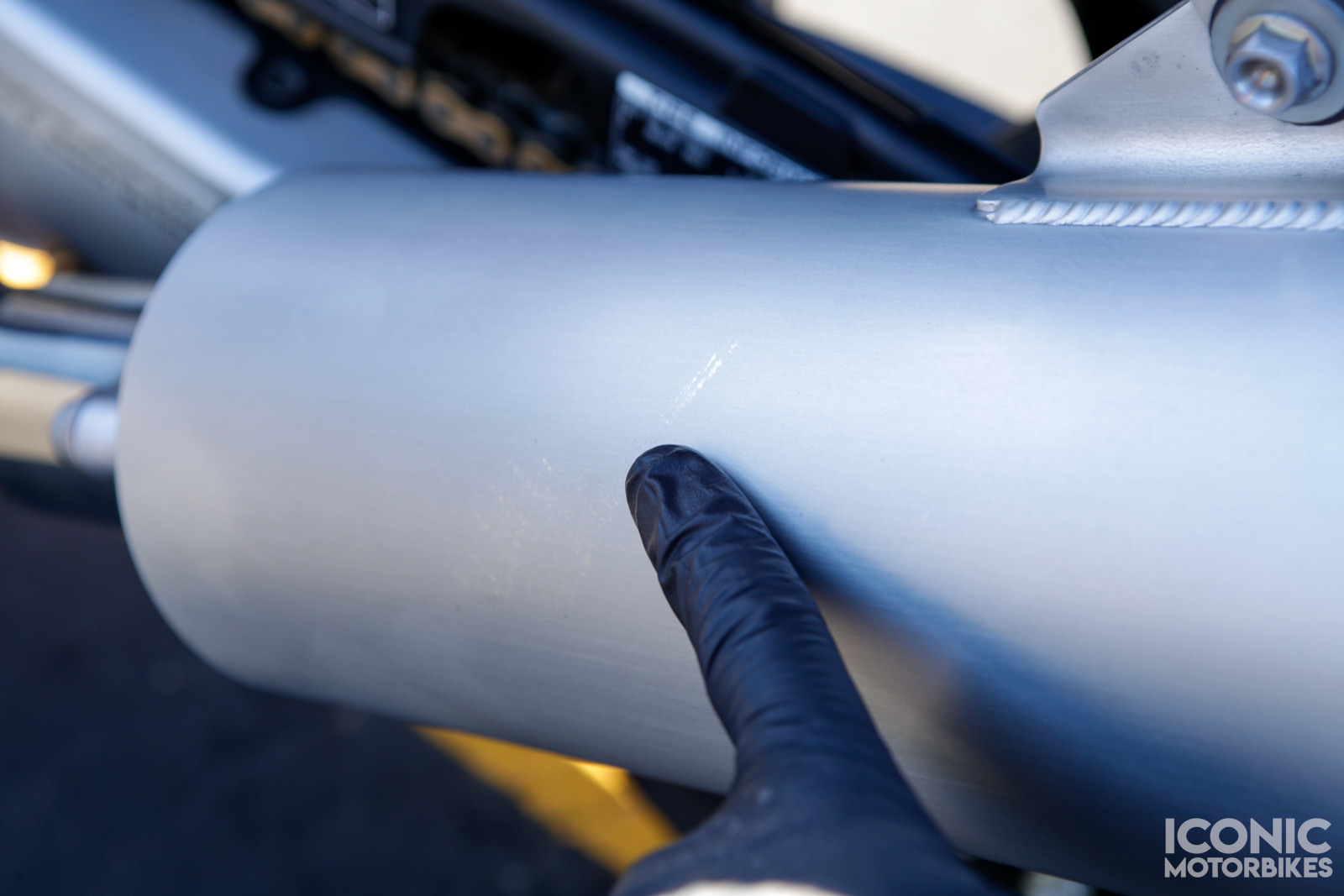 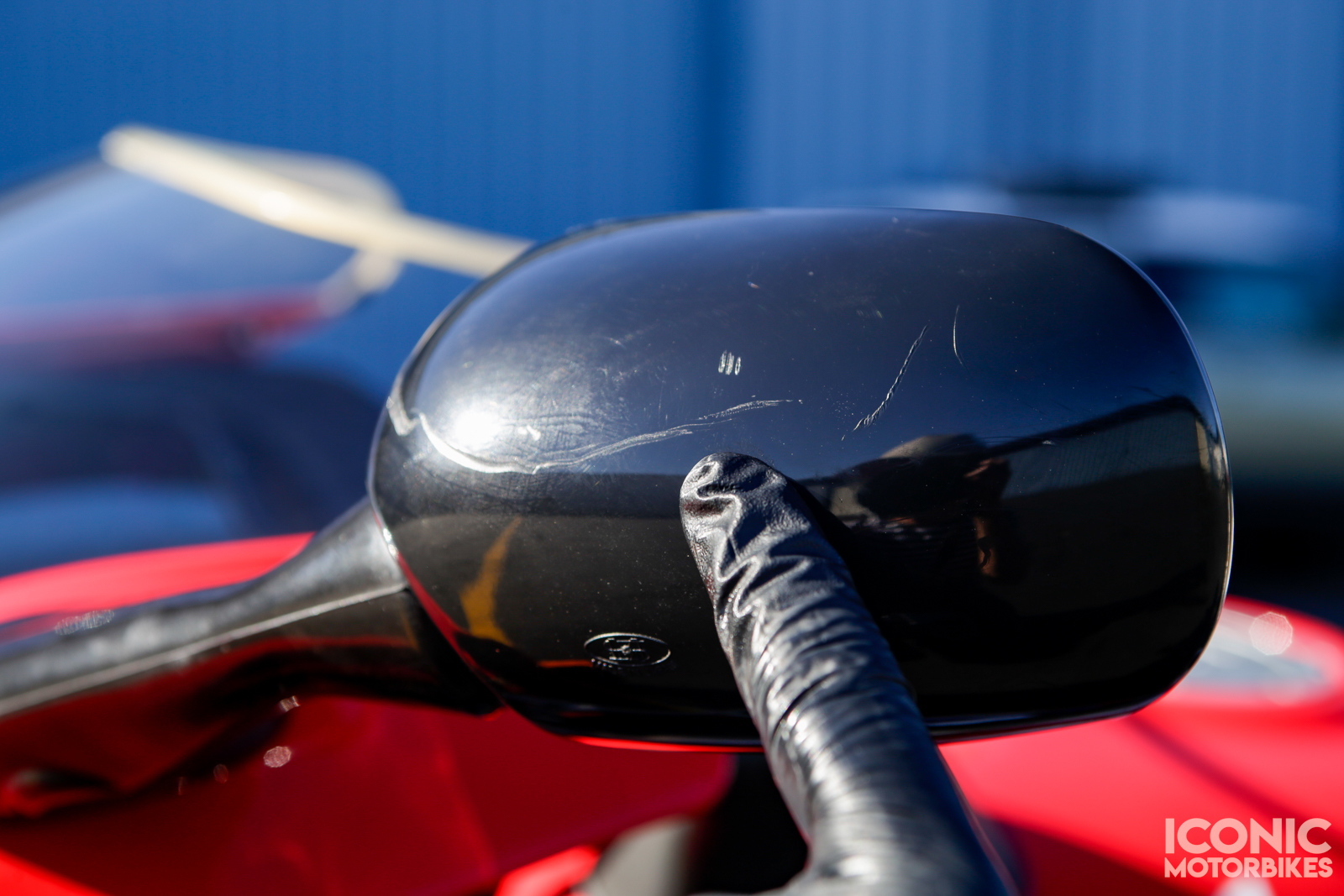 It is riding on the original tires.

Currently located at our facility in Santa Monica, California (please make an appointment for an inspection), this Honda is offered on a clean Oregon title. Please note that it is titled as a 1995 model. Have any RC45 stories or questions about this listing? Let us know in the “Comments” tab! 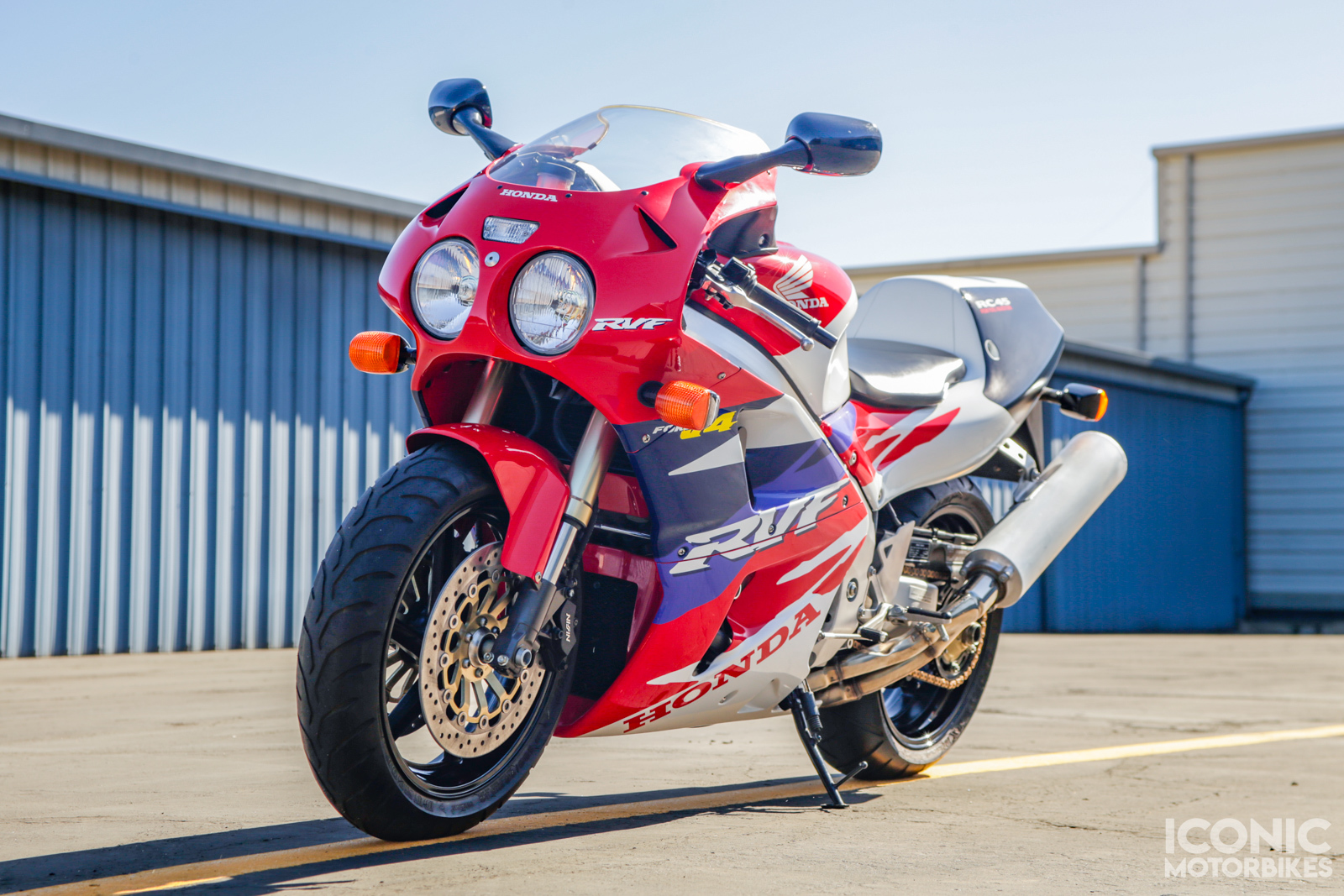