This video is from before our techs went through it:

This video is after we made it a runner: 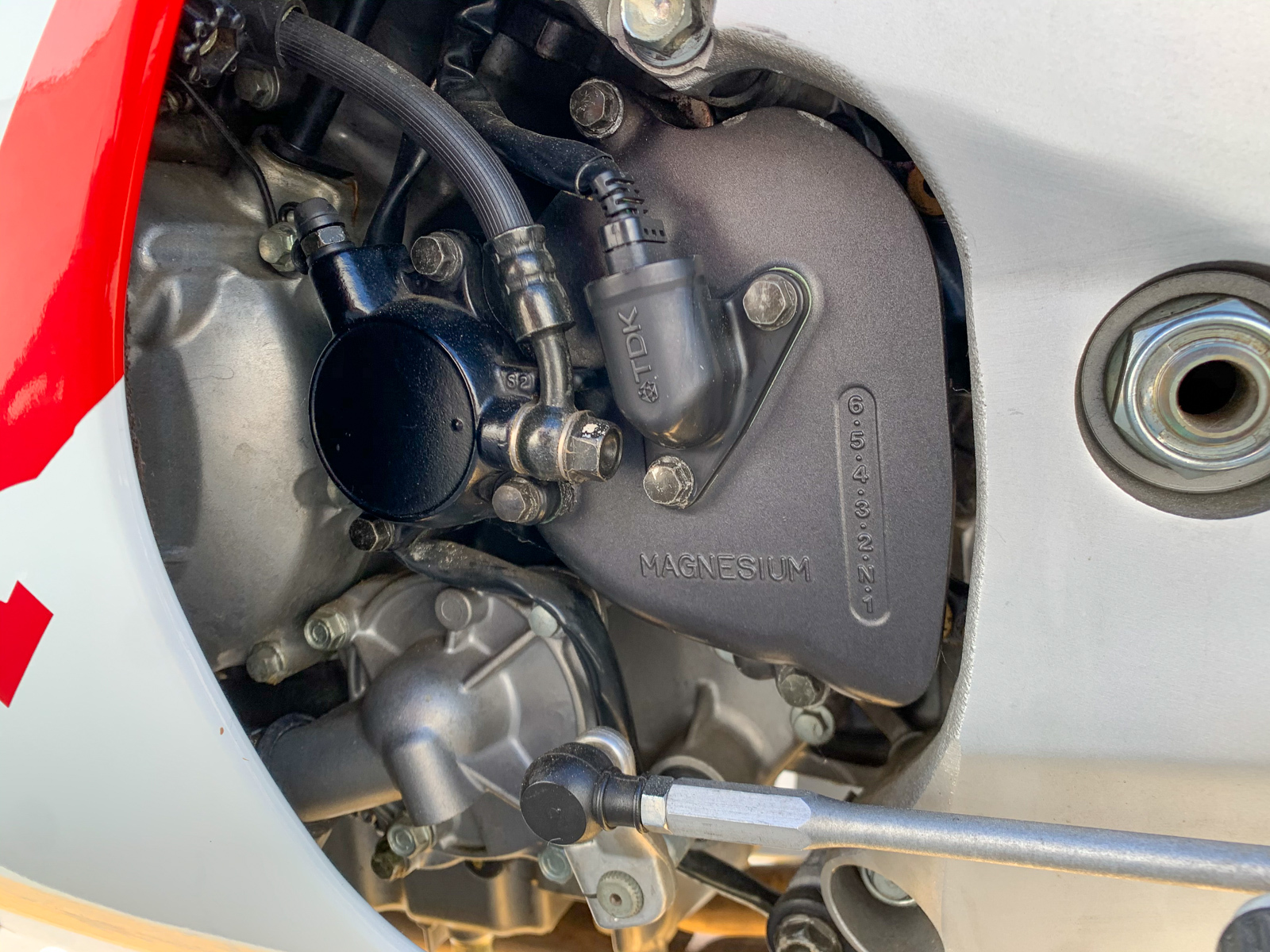 The Euro and Japanese-spec RC45s made 118 hp at 12,000 rpm and 56 ft-lbs of torque at 10,000 rpm while the American model only generated 101 hp — though the US version could be brought up to the Euro’s 118 via a simple tweak of the PGM-FI box. From day one Honda offered a supplementary race kit for the RC45 – for a very steep price – which was capable of bringing output up to an insane 190 hp.

Until the RC45, all of Honda’s V4 machines used a consistent bore and stroke of 70mm x 48.6mm, but the RC45 ended that tradition instead using a 72mm x 46mm setup. The RC45 also used gear-driven cams like the RC30, however, the drive was relocated to the side of the engine to allow for a narrower package. Wrapped around the V4 was a twin-spar aluminum chassis that had been slightly reworked with tweaked dimensions and slightly thinner walls. Suspension on the RC45 consisted of upside-down 41mm forks and a gas-charged shock absorber out back paired with Elf’s single-sided swing-arm which was slightly longer than the unit on the RC30. Both ends were adjustable for rebound, preload, and compression. The RVF’s riding position was still sporty but not nearly as hunched over as its predecessor’s, with a 50mm lower seat height.

Honda was able to achieve a good deal of success with the RVF750R, with Miguel Duhamel winning the 1995 AMA Superbike Championship and the 1996 Daytona 200, Ben Bostrom nabbing the 1998 AMA Superbike title, in addition to Aaron Slight, Kocinski, Carl Fogarty, and Colin Edwards all securing WSBK wins on the RC45, plus a trio of Suzuka 8 Hour wins in ’97, ’98, and ’99. While Honda’s current flagship supersport is powered by an inline-four, the firm still uses V4 engines in its current crop of MotoGP missiles that can trace than development back to bikes like the RC30 and RC45. 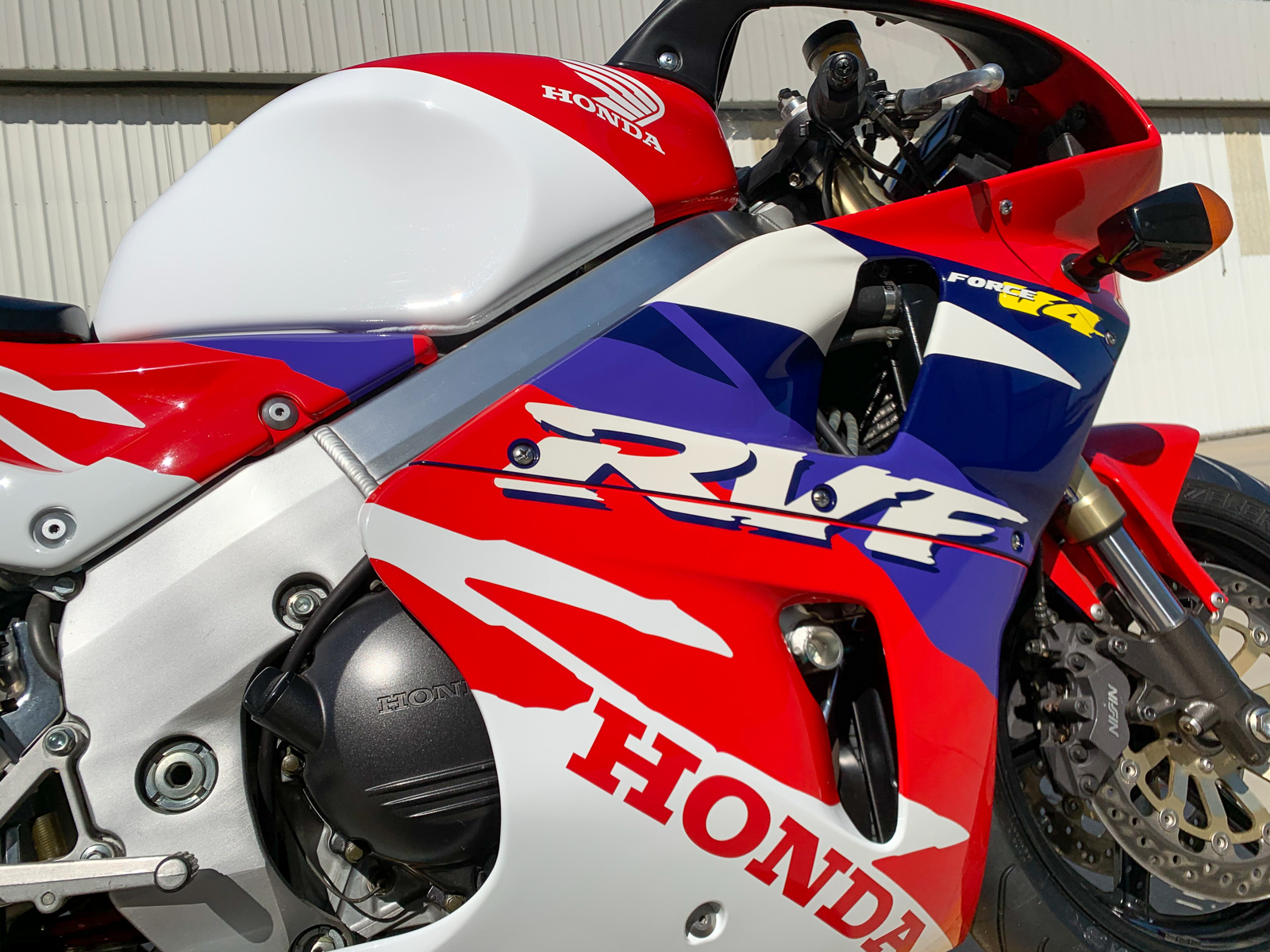 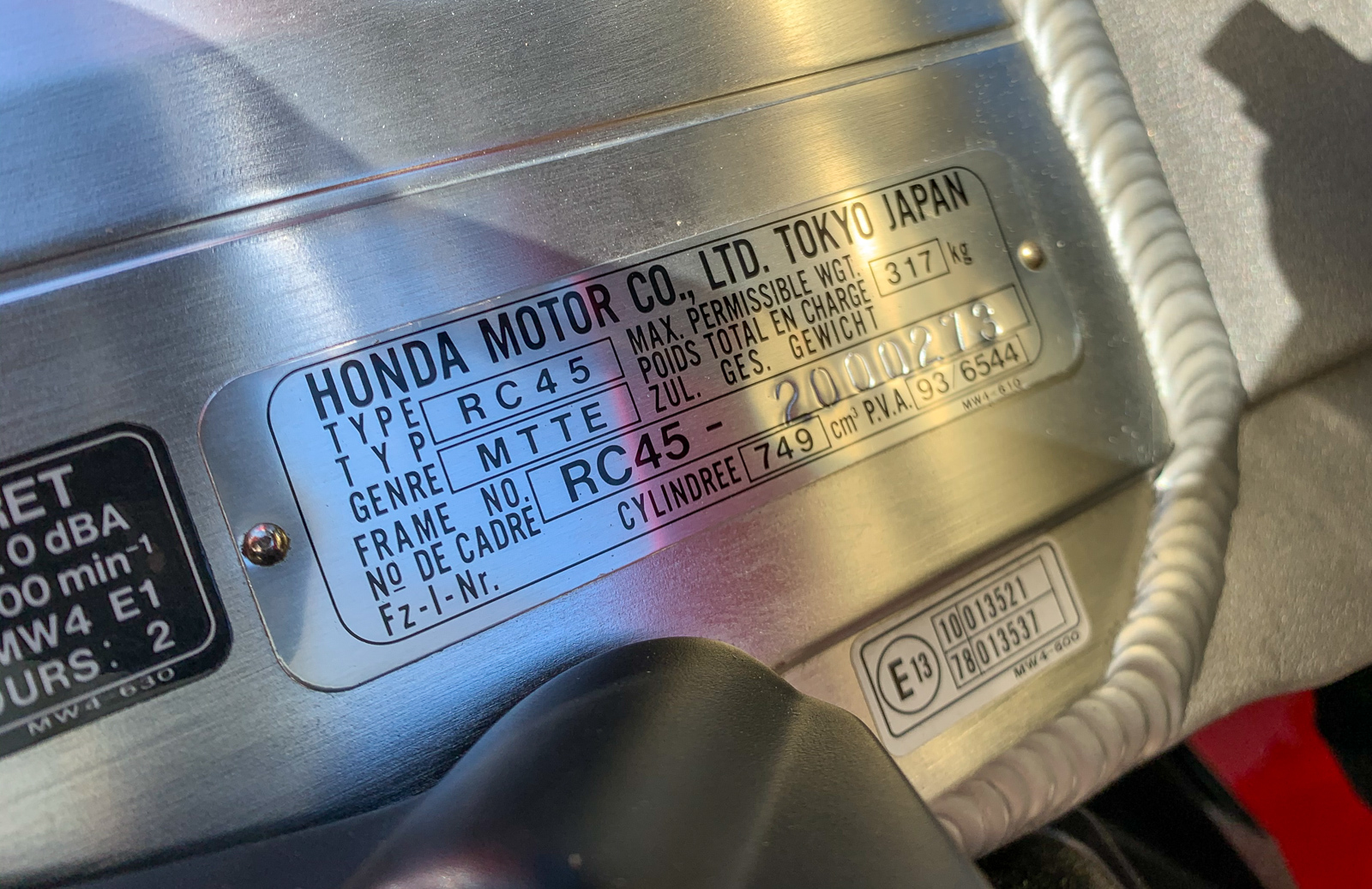 It came to us with no history, but it’s in impressive cosmetic condition and a clean VIN. We checked with our friends at American Honda and they confirmed that it was originally allocated to South America.

The owner bought it sometime between 2000-2002, stuck it in a crate, and then forgot about it!

It had beat up wheels, mismatched tires, and the wrong wheel spacers in the front. After our research, our best guess is that this was a “back room bike” where the dealer stole parts off of it for warranty work. When the dealership went out of business, they slapped together whatever parts they could find to make it whole and sold it. It’s common for dealers to use inventory for hard to find parts and a RC45 would have been a good candidate for slow warranty replacements.

The owner brought it to us to make things right before putting it up for sale, so we stripped it down (the valves were spotless), powdercoated the wheels, and installed new tires, new bearings, and a new battery – she started right up! We looked at the fuel injection as well as wear and tear on hardware, there are no signs that the engine bolts or suspension were ever tampered with from new.

There is also no evidence of paint work, a tip over, or a speedometer swap. Our buddies at Arch Motorcycles were kind enough to make us new wheel spacers and now she looks amazing. Thank you, Arch!

Please note that some photos show a missing bar end on the left side – that part is coming in to us today and will be installed before the auction ends.

It basically shows as new now, which isn’t too surprising as the odometer shows just 35 kilometers.

We spent a lot of time trying to verify if this reading is correct. The bike shows minimal use throughout but the wheels were beat up and the front rotors look like they’ve gone through some heat cycles. Our White Glove service can likely source some NOS rotors for the next owner if desired. 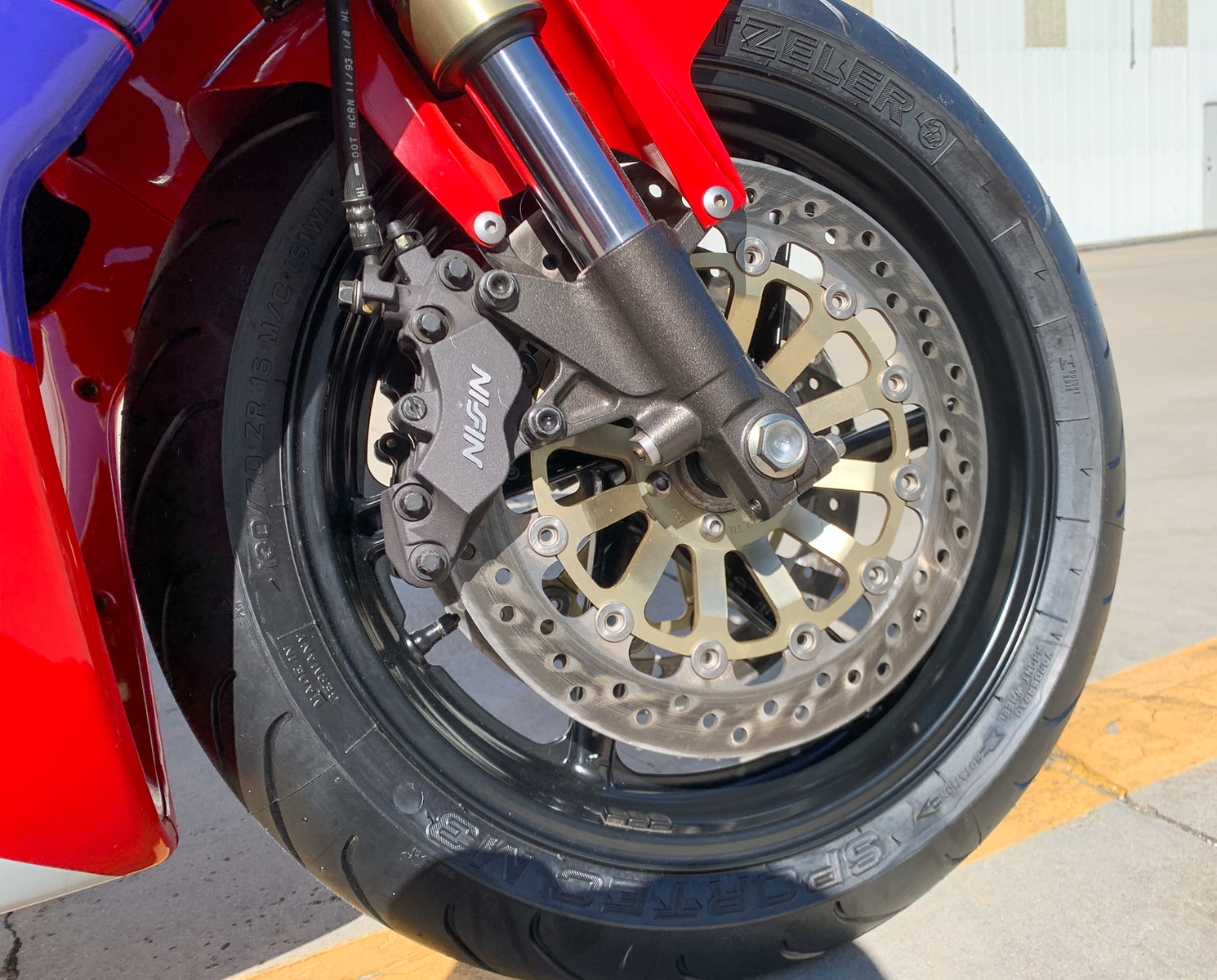 We have NOT test ridden the bike as the new owner may want the odometer reading to stay as low as possible, but we would be happy to and will stand by its mechanical condition prior to full payoff of the auction winner if the buyer wants us to test it first. We’ve gone with a lower-than-usual reserve because there’s no provenance but it’s a strong runner and it looks good.

The one cosmetic issue is a small chip in the left side of the tail.

Nothing else comes with the bike other than what you see here in photos. This RC45 arrived with no paperwork but a VIN check has been completed by a California official. As CA requires a 17 digit VIN and 7,500 miles on the odometer, we had to source an Oregon title for the owner, which is currently on its way. Please note that you will not be able to title this bike in California or Hawaii.

It doesn’t have the usual history of the motorcycles that we usually feature, but this RC45 has negligible mileage and it looks fantastic. Whether you want to ride it or display it, this Honda is ready for you! 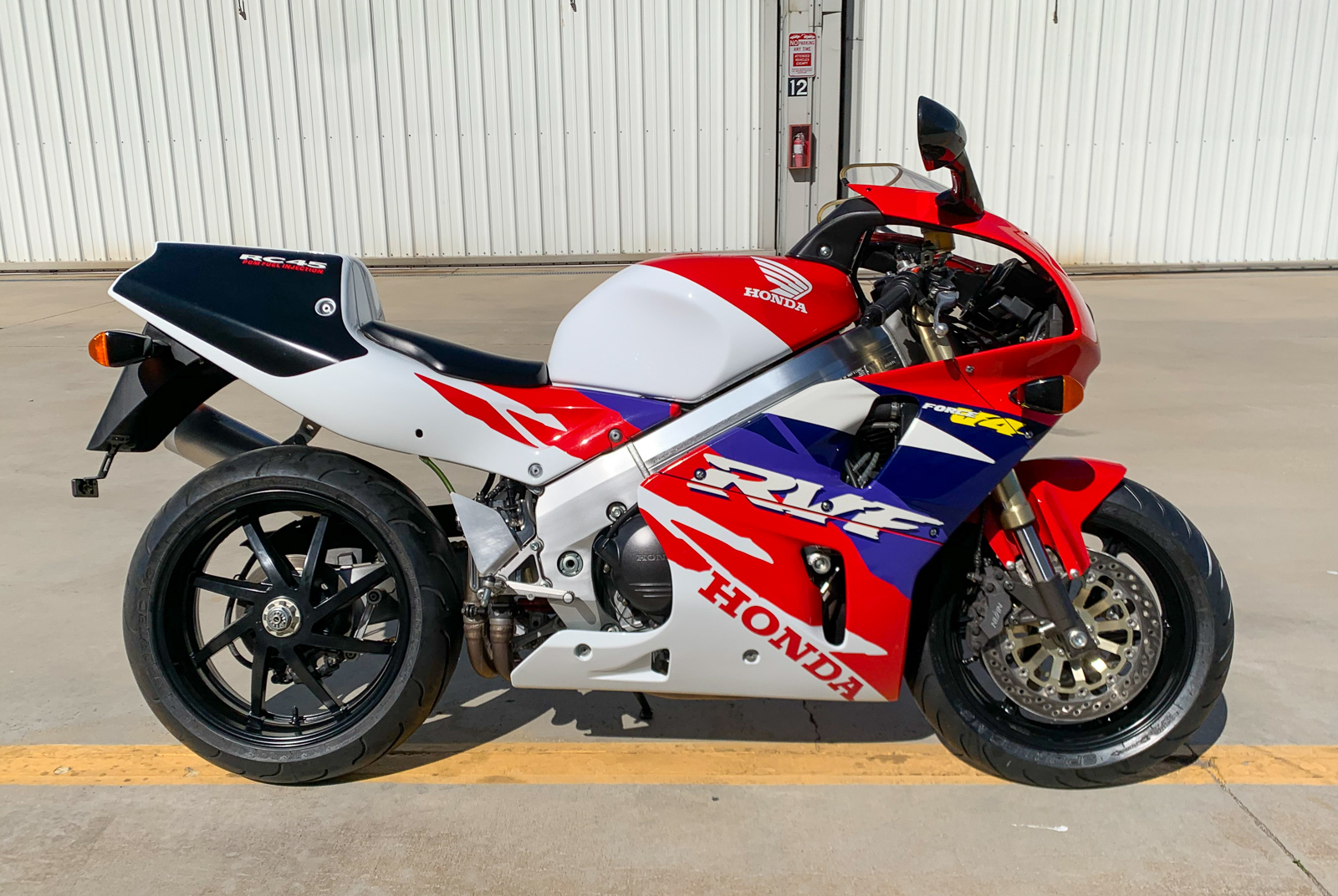