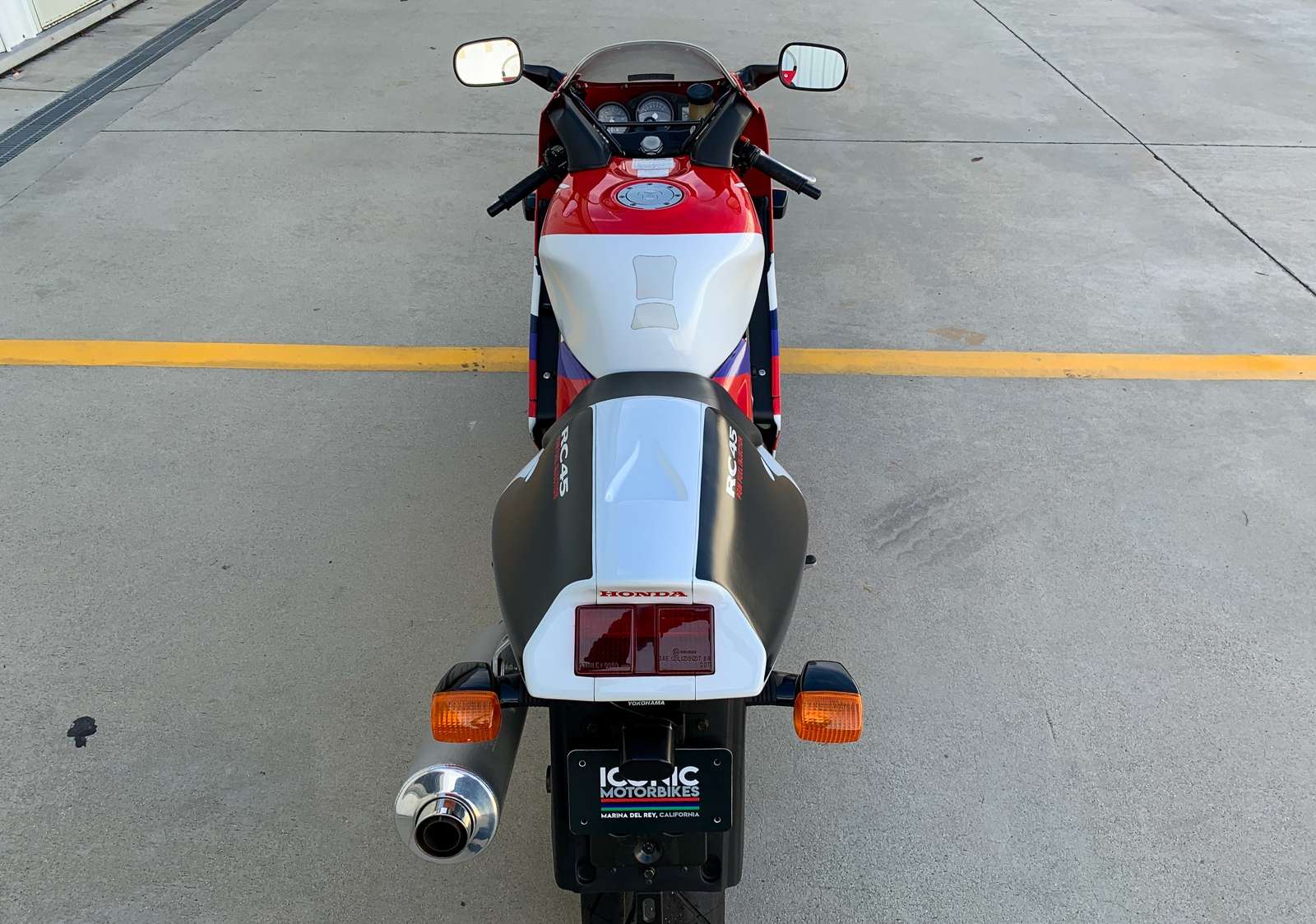 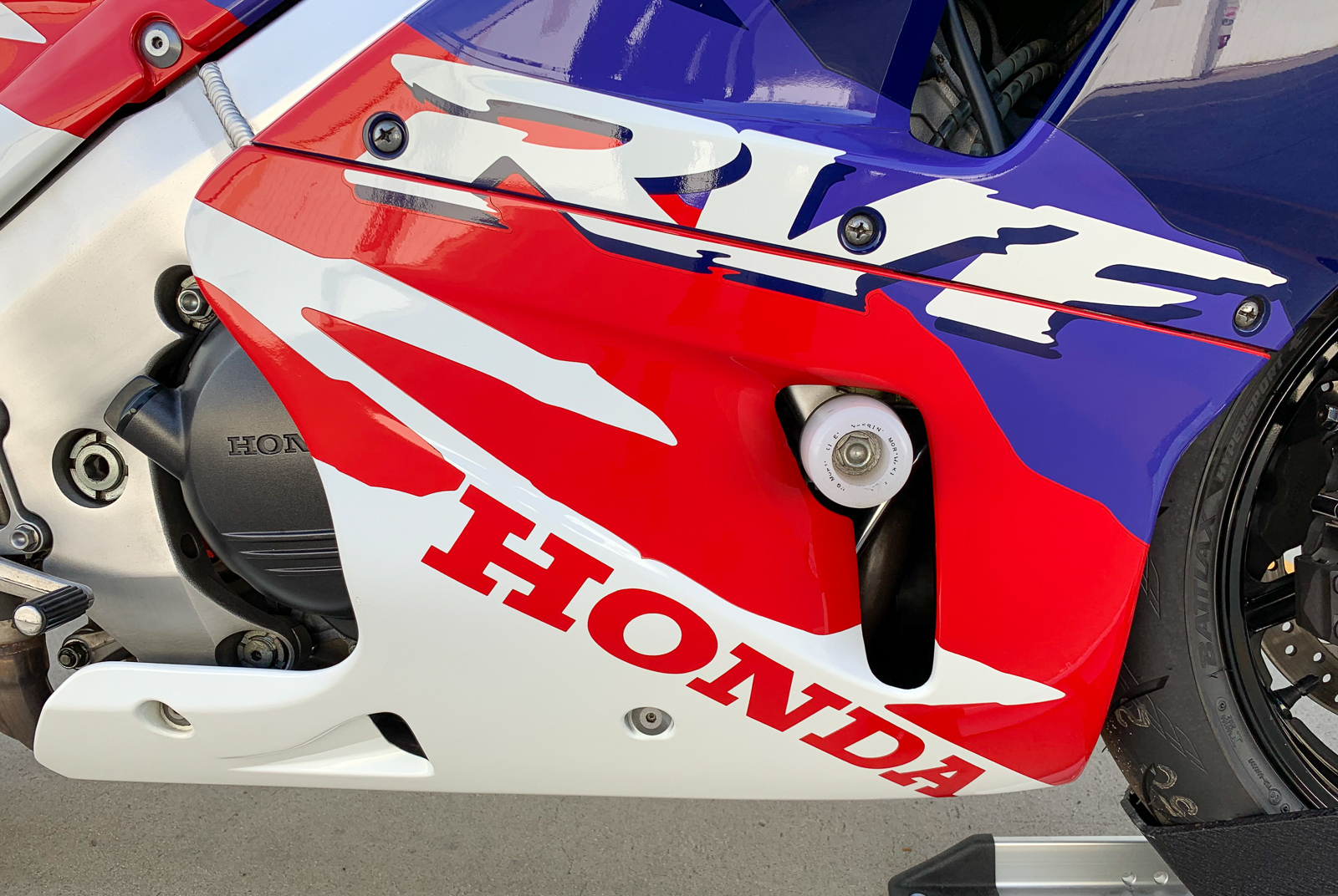 The Euro and Japanese-spec RC45s made 118 hp at 12,000 rpm and 56 ft-lbs of torque at 10,000 rpm while the American model only generated 101 hp — though the US version could be brought up to the Euro’s 118 via a simple tweak of the PGM-FI box. From day one Honda offered a supplementary race kit for the RC45 – for a very steep price – which was capable of bringing output up to an insane 190 hp. 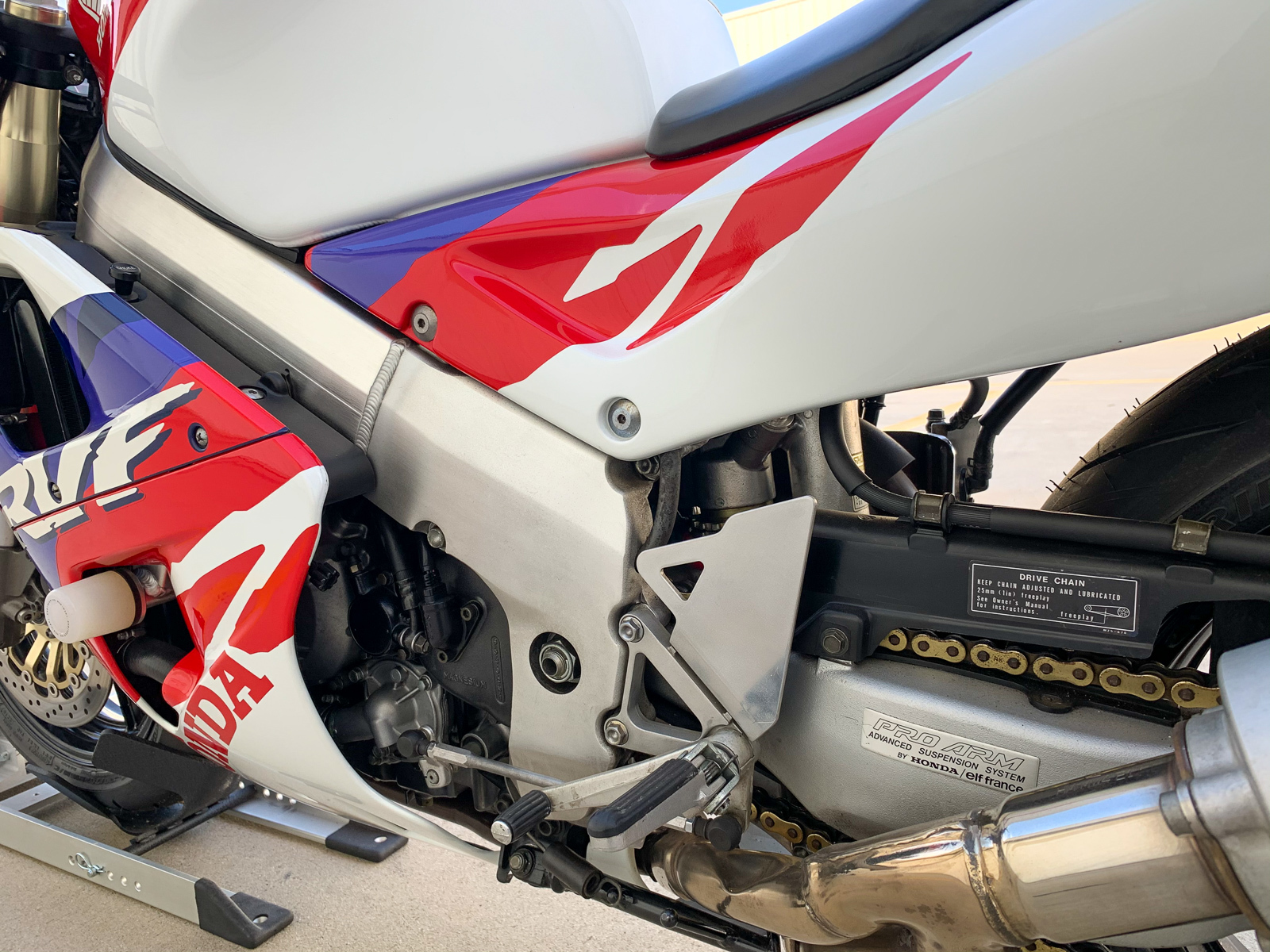 Until the RC45, all of Honda’s V4 machines used a consistent bore and stroke of 70mm x 48.6mm, but the RC45 ended that tradition instead using a 72mm x 46mm setup. The RC45 also used gear-driven cams like the RC30, however, the drive was relocated to the side of the engine to allow for a narrower package. Wrapped around the V4 was a twin-spar aluminum chassis that had been slightly reworked with tweaked dimensions and slightly thinner walls. Suspension on the RC45 consisted of upside-down 41mm forks and a gas-charged shock absorber out back paired with Elf’s single-sided swing-arm which was slightly longer than the unit on the RC30. Both ends were adjustable for rebound, preload, and compression. The RVF’s riding position was still sporty but not nearly as hunched over as its predecessor’s, with a 50mm lower seat height.

Even though the RC45 was built from 1994 to 1999, it was only officially sold in the US for its first year of production. In order to comply with WSBK homologation rules, 200 examples were produced the first year in ’94, followed by another 500 units made for the Japanese market. In total, only 50 units were ever made available in the US.

Honda was able to achieve a good deal of success with the RVF750R, with Miguel Duhamel winning the 1995 AMA Superbike Championship and the 1996 Daytona 200, Ben Bostrom nabbing the 1998 AMA Superbike title, in addition to Aaron Slight, Kocinski, Carl Fogarty, and Colin Edwards all securing WSBK wins on the RC45, plus a trio of Suzuka 8 Hour wins in ’97, ’98, and ’99. While Honda’s current flagship supersport is powered by an inline-four, the firm still uses V4 engines in its current crop of MotoGP missiles that can trace than development back to bikes like the RC30 and RC45. 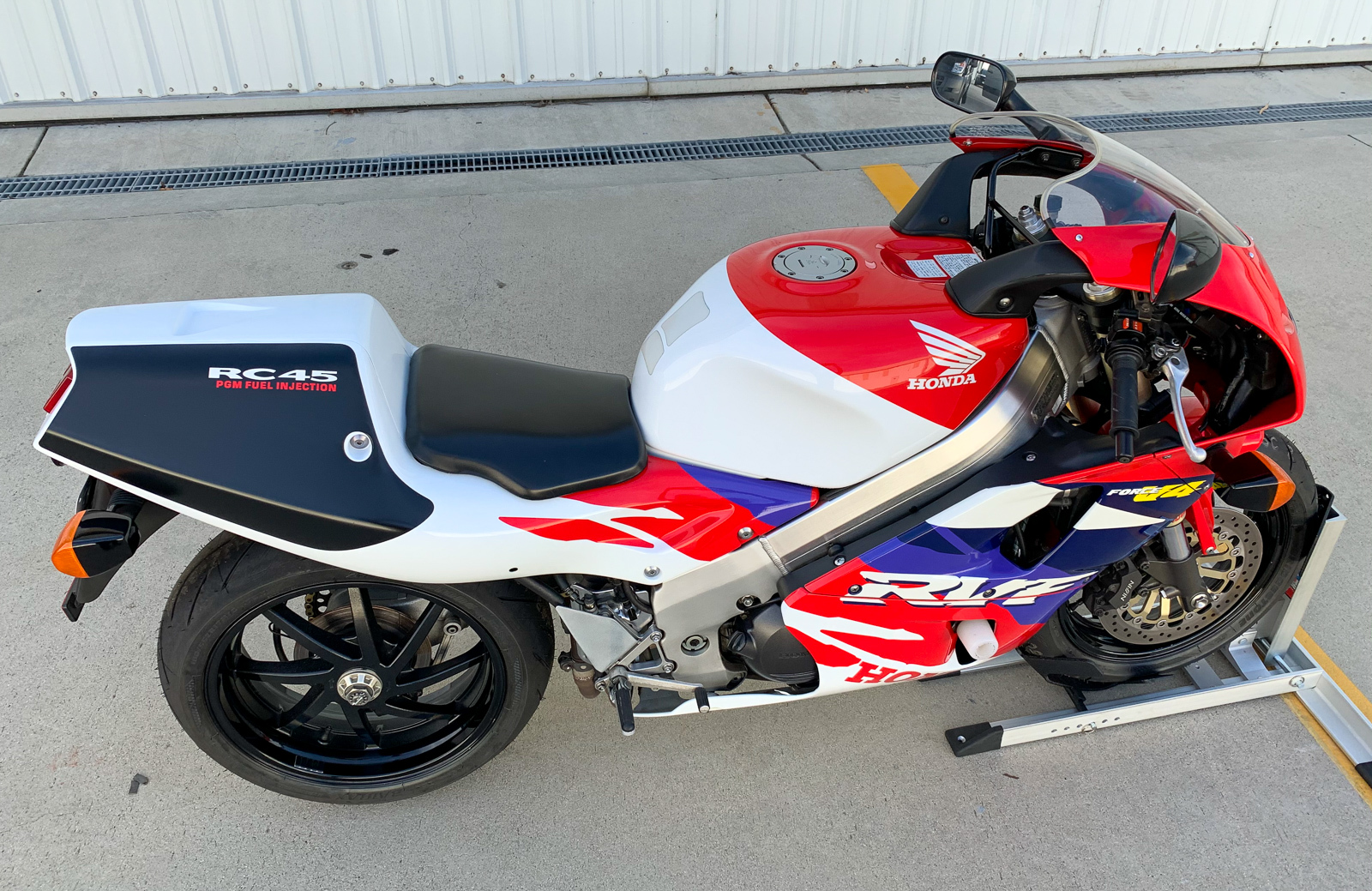 It can sometimes be difficult to track down the history of bikes like this that have visited multiple countries, but we believe that this 1995 RC45 (VIN: JH2RC452100066) was originally sold in Europe, as it has a European VIN tag on it and the gauge is in miles per hour. With that said, we know that it also spent time in Japan, as that’s where the previous owner imported it from.

Said owner imported it to the US, and it currently shows 10,400 miles on the odometer. The sale includes two keys and an aftermarket stand.

The example’s OEM fairings are in excellent shape, and it looks as though this RC45 has never been on its side – it is equipped with frame sliders to minimize such an issue if it were to come up in the future. Bikes imported from Japan often have a bit of corrosion, though we don’t see any of the usual trouble spots on this machine. With that said, there is a minor chip on the edge of the middle fairing where it meets the lower fairing on the right side, as well as paint damage on the tail near a bolt hole.

This RC45 will come with an Utah state title and it is titled as a street bike for road use. It runs well – we’ll offer the buyer the choice of having the bike delivered ready to ride or prepped for storage for free. 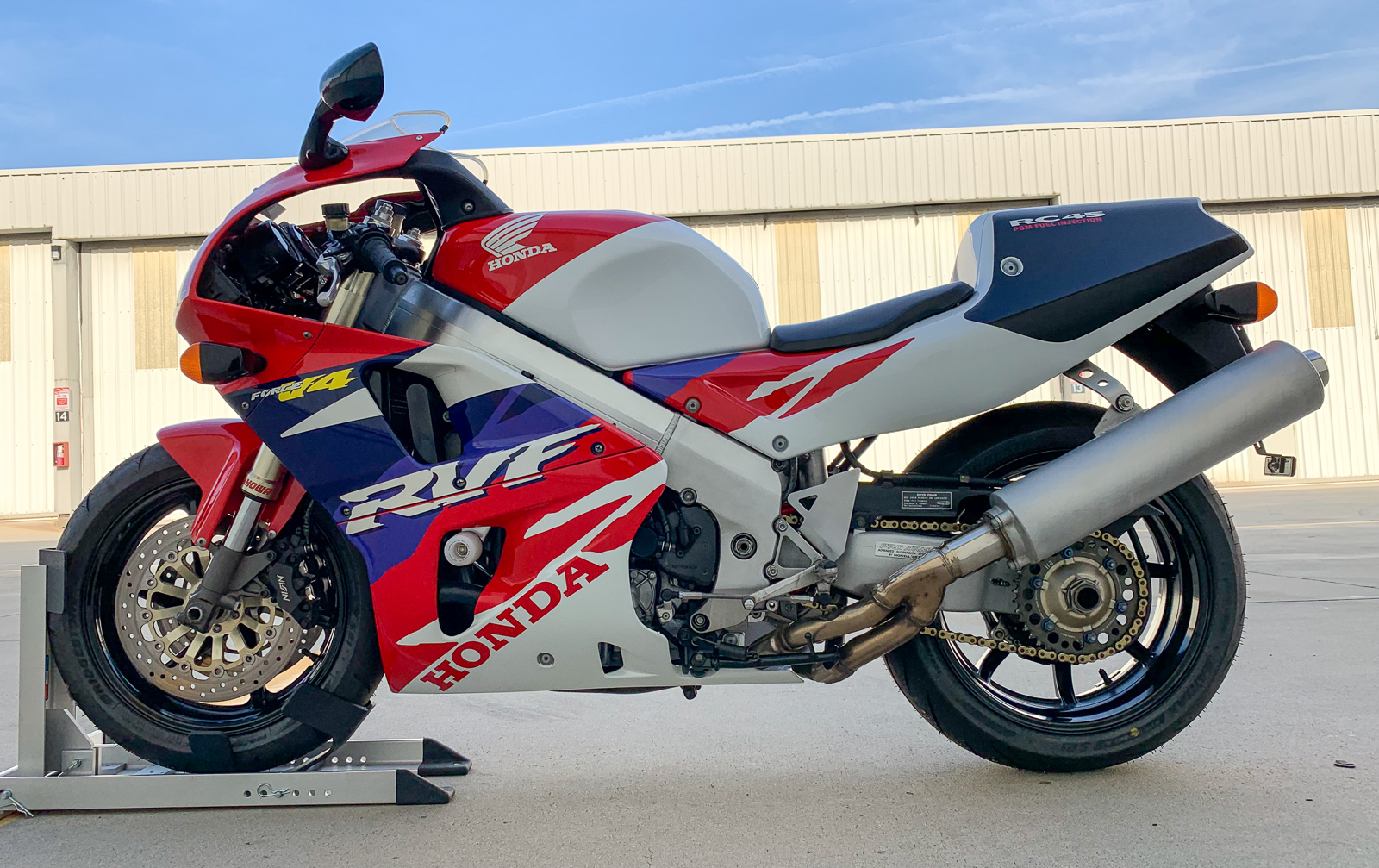