Click here for an instaVIN Motorcycle History Report on this 1996 Aprilia RS250.

Additional photos for this RS250 are available here for your perusal. Please let us know if you require any additional photographs! 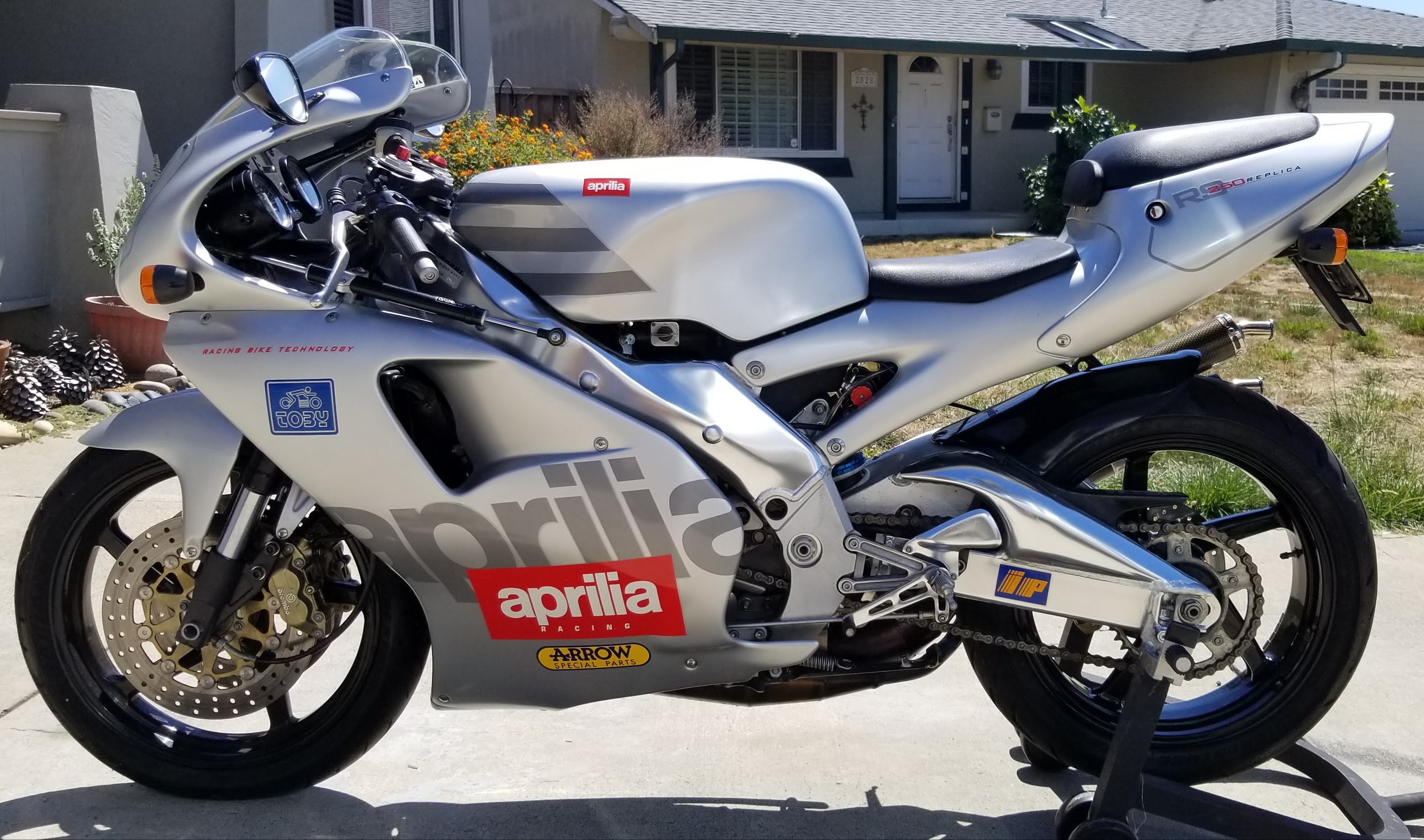 Founded by Ivano Beggio in post-World War II Italy, Aprilia started out as a bicycle manufacturer before eventually releasing its first motorcycles in the late ‘60s/early ‘70s. The Noale-based firm found some success producing mopeds, scooters, and other small-displacement runners, but a trio of Grand Prix world championships in the early ‘90s would forever alter the fate of the once-boutique outfit.

Riding Aprilia’s quarter-liter GP mount, the RSV250, Max Biaggi secured back-to-back-to-back world titles in ’94, ’95, and ’96 (plus another title in ’97 with Honda). Like Paul Smart’s Desmo racer had done for Ducati two-decades-or-so prior, the success achieved on Biaggi’s 250cc GP racer put Aprilia on the map and helped to establish the small Italian firm as a true contender on the world stage.

Taking advantage of the factory race effort’s triumphs, in 1994 Aprilia released a road-legal replica version of the RSV250 known as the RS250. Powering the RS was a modified version of the liquid-cooled, 249cc, two-stroke, 90-degree V-Twin from Suzuki’s RGV250. The RS’s engine utilized the Suzuki’s 34mm Mikuni flat slide carbs, though it featured its own Aprilia-designed expansion chambers, barrels, air-box, and exhaust system, a revised ignition and ECU, and a higher compression ratio. Building on the already well-designed single-crank V-Twin developed by Suzuki, the changes made in Noale afforded the RS more mid-range power. Married to a six-speed transmission, the RS250’s engine was similar to the motor found in Aprilia’s GP mount, albeit with a bore and stroke of 56mm X 50mm versus the race bike’s square 54mm X 54mm setup. The RS generated 29.5ft-lbs of torque at 10,750rpm and around 70hp at 11,900rpm — just shy of its 12,000rpm redline. 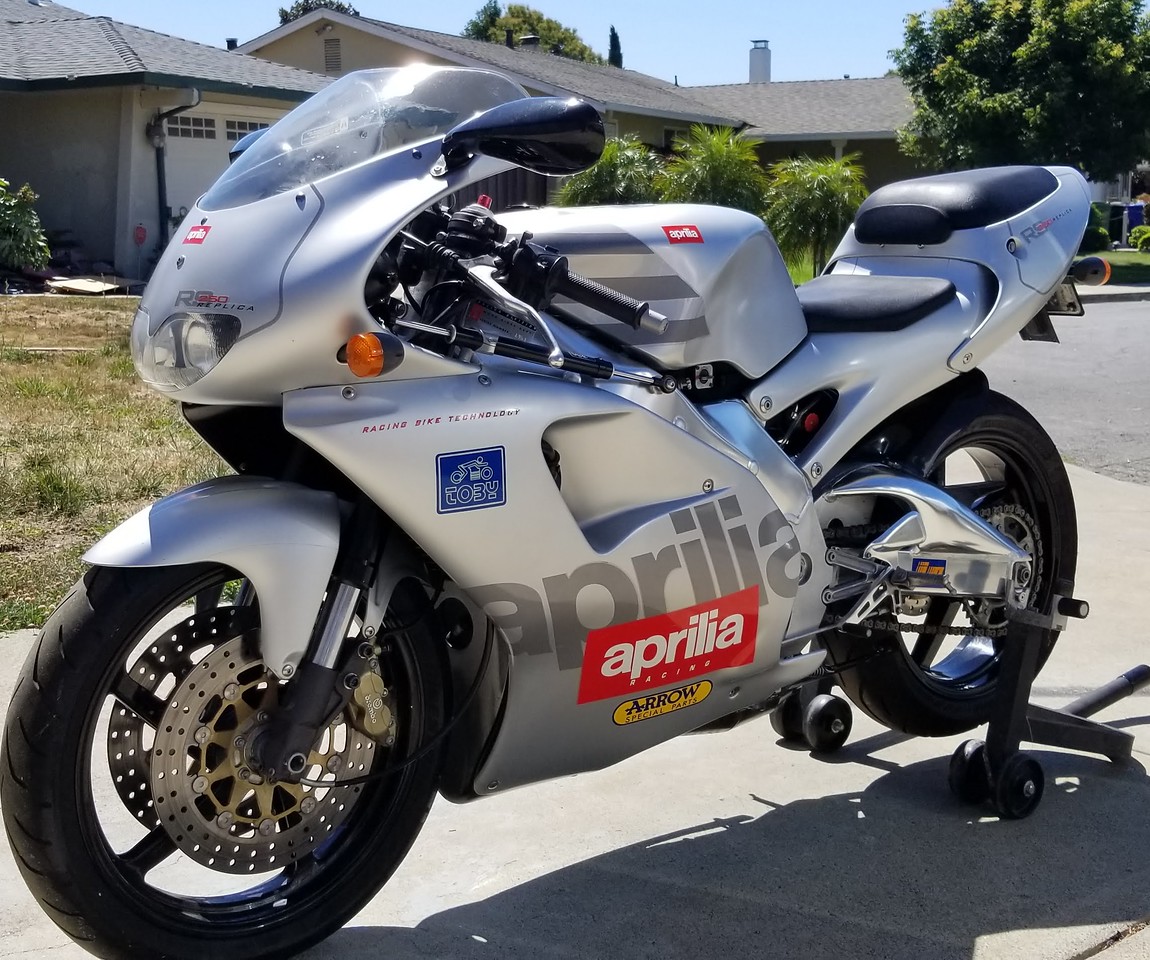 What really made the RS250 special, however, was its chassis design. Derived from the bikes built by Aprilia’s factory race program, the RS250 used a polished alloy twin-spar frame paired with an adjustable magnesium alloy banana swing-arm. The trick alloy frame was fitted with 41mm inverted Marzocchi fork and a mono-shock in back — both adjustable for preload and rebound damping.

Rolling on 17-inch, five-arm, cast aluminum rims, the RS250 and its race-bred chassis afforded its rider incredibly sharp handling. Slowing the V-Twin was a set of dual 298mm discs pinched by four-piston Brembo Serie Oro calipers out front and a single 220mm unit bit by a dual-pot caliper in the rear. Its GP-inspired bodywork not only looked the business but gave the RS one very slippery drag coefficient. Tipping the scales at just 310 lbs dry, the RS boasted a top speed of over 130 mph, and a standing quarter-mile time of 12.5-seconds flat. That’s faster than an eight liter V10 Dodge Viper, Porsche 911 GT3 RS 996, Mercedes SL Class 65 AMG, Aston Martin DB11 V8 Twin Turbo, and countless other six-figure supercars. 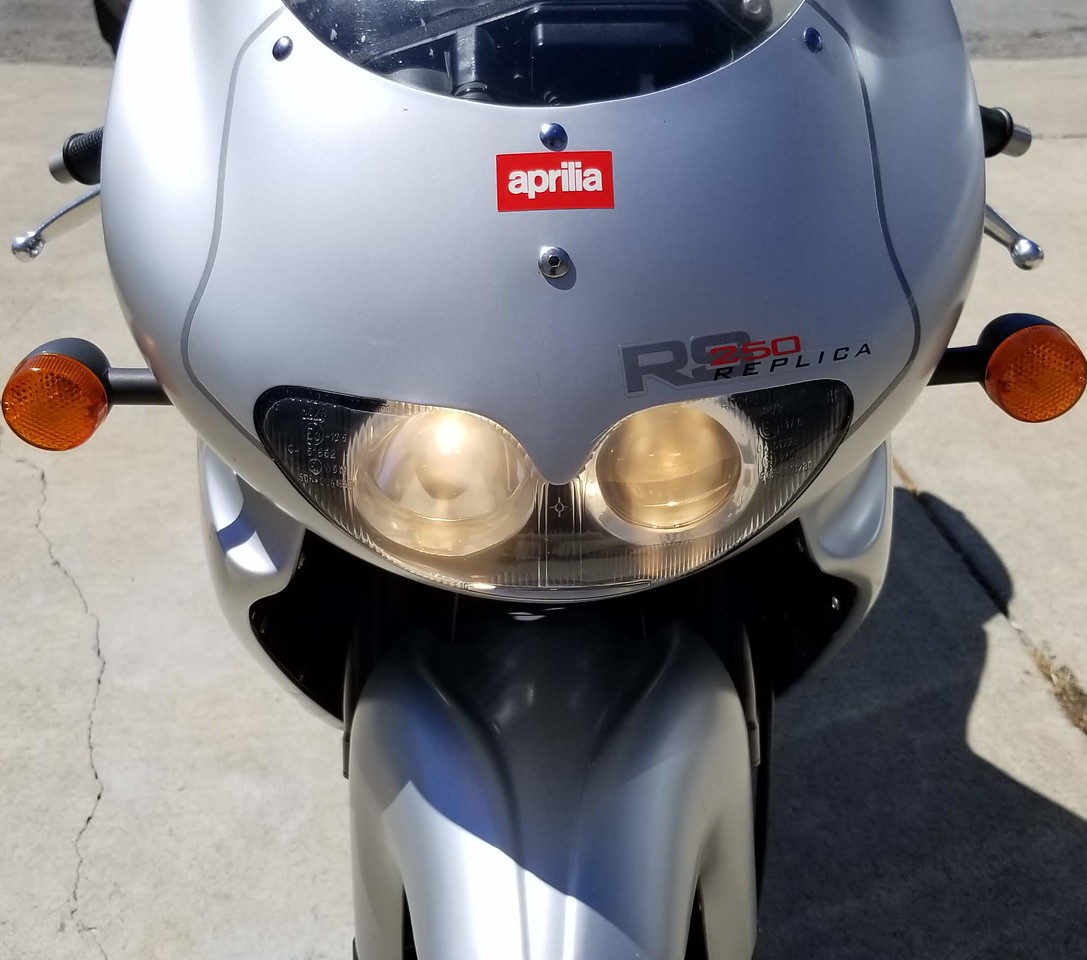 Though over two decades have passed since this machine left the factory, the track-oriented V-Twins are regarded incredibly highly today. MCN went as far as to call the RS250, “Simply one of the very best, least-compromised sports motorcycles money can buy”, and Visor Down more recently stated, “The real problem with the RS250 is that if you want one, a good one, you’re too late.”

While we agree with both publications, we do have a one-time solution to Visor Down’s aforementioned problem in the form of a beautiful 1996 Aprilia RS250 (VIN: ZD4LD0100TN050915). The seller is recuperating from shoulder surgery and cannot ride for 6 months, so he’s letting go of this silver fox. Despite the 2017 sticker on the license plate, this bike is currently registered and insured. The bike has been on display since 2017, though it was given fresh coolant and brake fluid before it was taken off the road. Upgrades include an Arrow exhaust and stainless steel brake lines. There are some minor scratches on the right side from previous shipping experiences (photos in the album), but this bike has fresh brake fluid and gasoline and it’s ready to ride.