Additional photos of this 1996 Ducati 916 SPA are available here for your perusal. 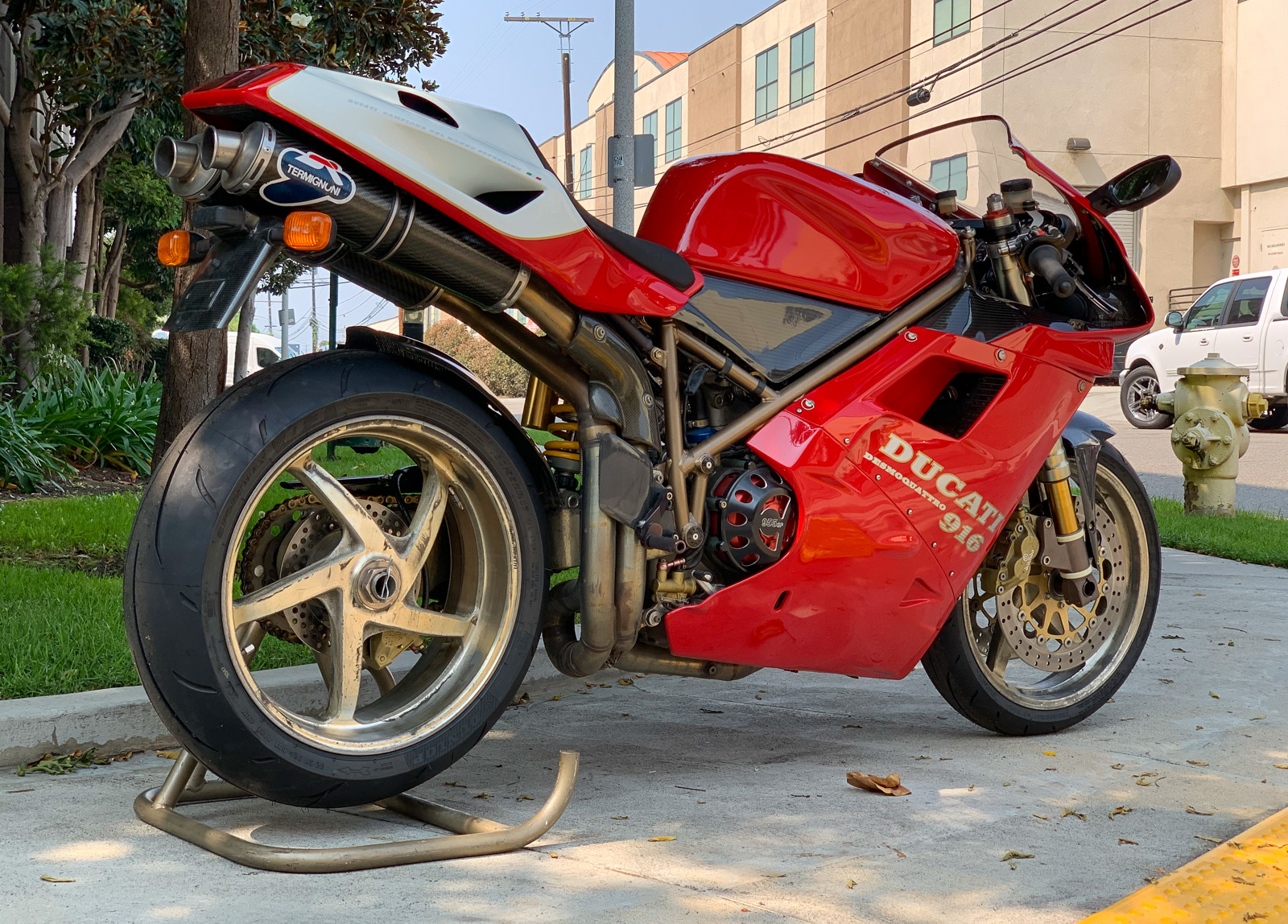 One of the rarest motorcycles that Ducati of the 1990s (and beyond), the 916 SPA is also known as the 955SP – and that’s your first hint as to why it’s special. With such a hard-to-find machine, specific information can be tough to pin down – but our favorite source when it comes to motorcycles like these is Jason Cormier at OddBike. In his story about the 916 Sport Production series, he notes that SPA stands for Sport Production America, and just 54 examples were built (50 of which were sold to the public). All still said 916 on the side, so it wasn’t immediately clear what was lurking underneath the fairings…

Ducati created this limited run to homologate a 2mm overbore (96mm pistons/barrels) for AMA Superbike. Sources say that the engine also benefited from titanium Pankl connecting rods, and “some sources quote a modified crankshaft and crankcases as well, but details are scarce.” We should note that we see a post from a SPA rebuild which states that the rods are actually steel. 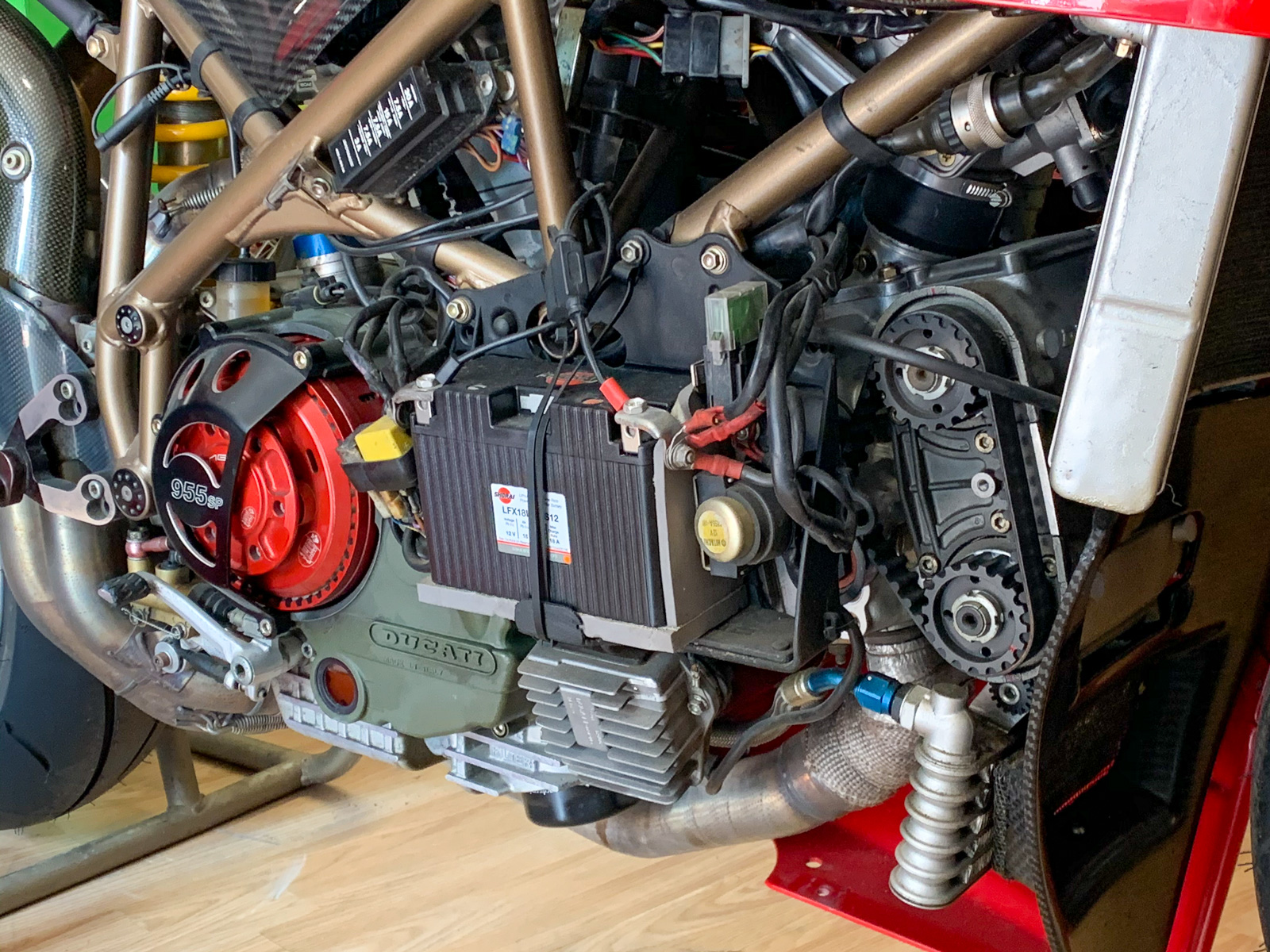 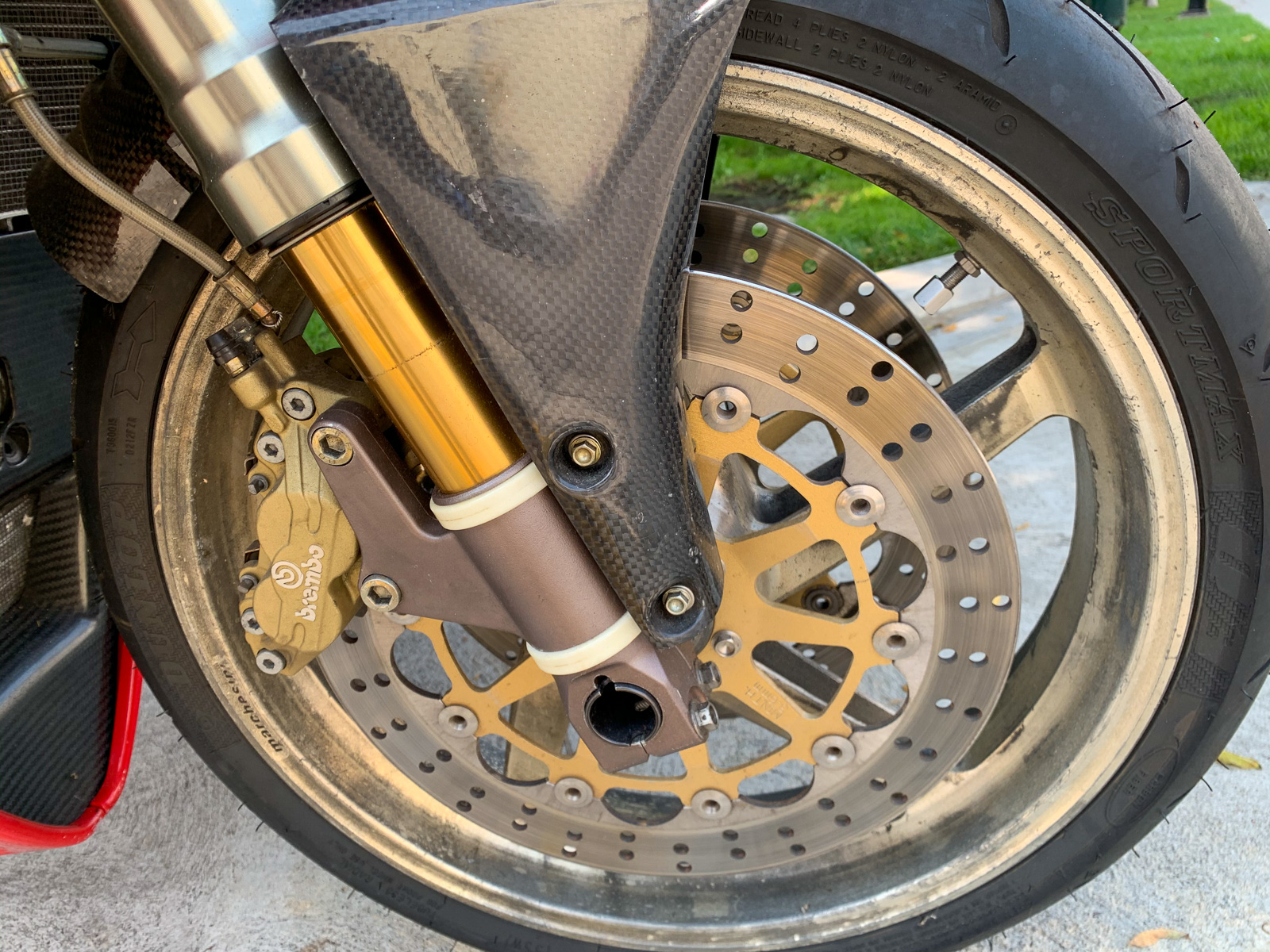 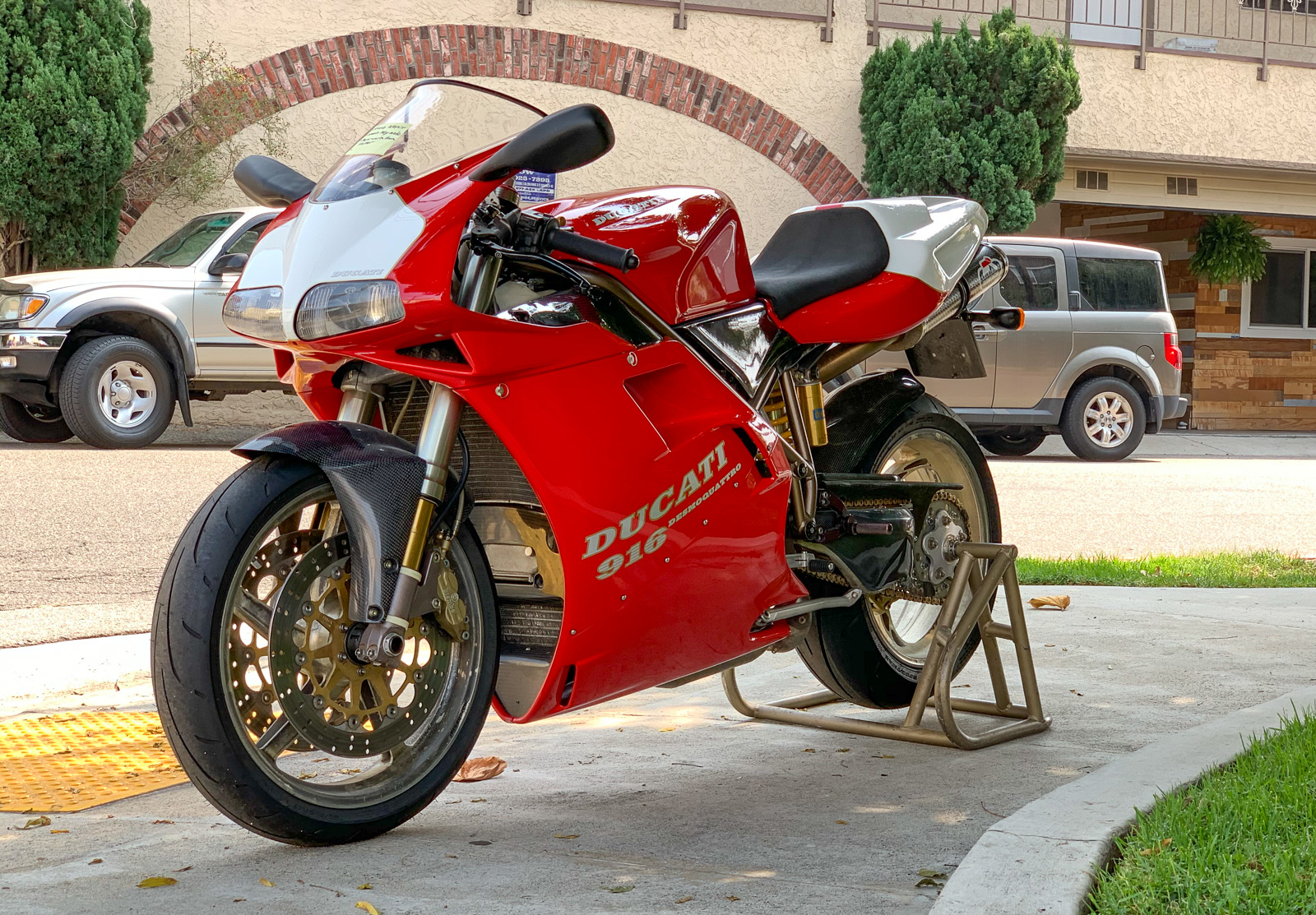 Several riders have simply bored their 916s out to create aftermarket 955s, but a true SPA will have a ZDM955 engine code.

The owner of this machine resides in South Africa, however it has been in a Southern California collection for several years. The current caretaker told us that this 955 was raced in AMA by Fred Eiker, who accumulated an impressive amount of spares. We spoke with Fred, who confirmed that he was the original owner (bought new from Ferracci) and that he raced it for a season.

*This paragraph has been updated to correct previously incorrect information* He then converted it for street use and unfortunately t-boned a car, damaging the frame and totaling the bike. He was able to source a replacement frame (#7068 as shown above) from Bruce C Meyers of BCM Motorsports (no longer in business). It comes up as a SPA frame in the Ducati database, though it has been repainted. 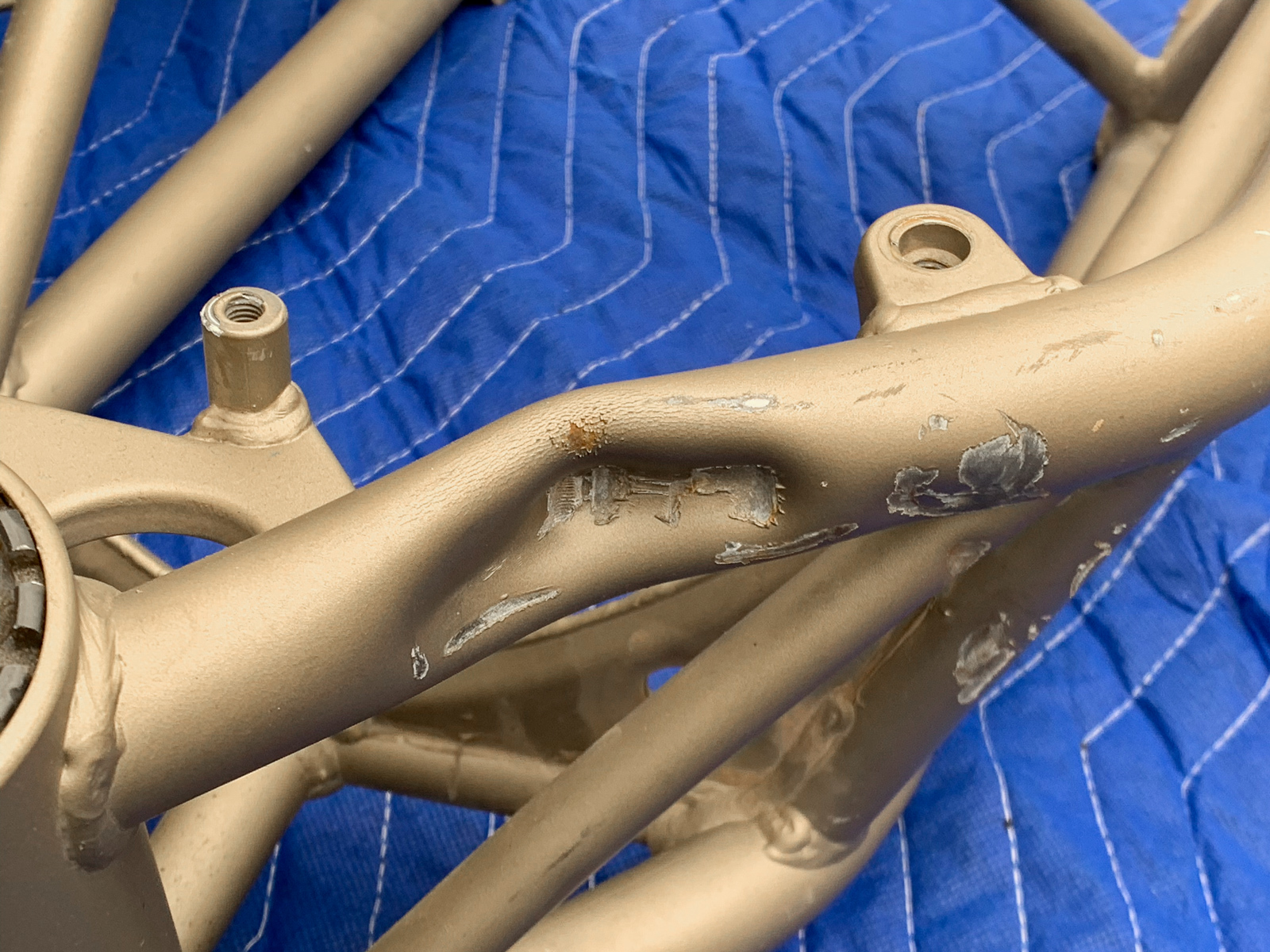 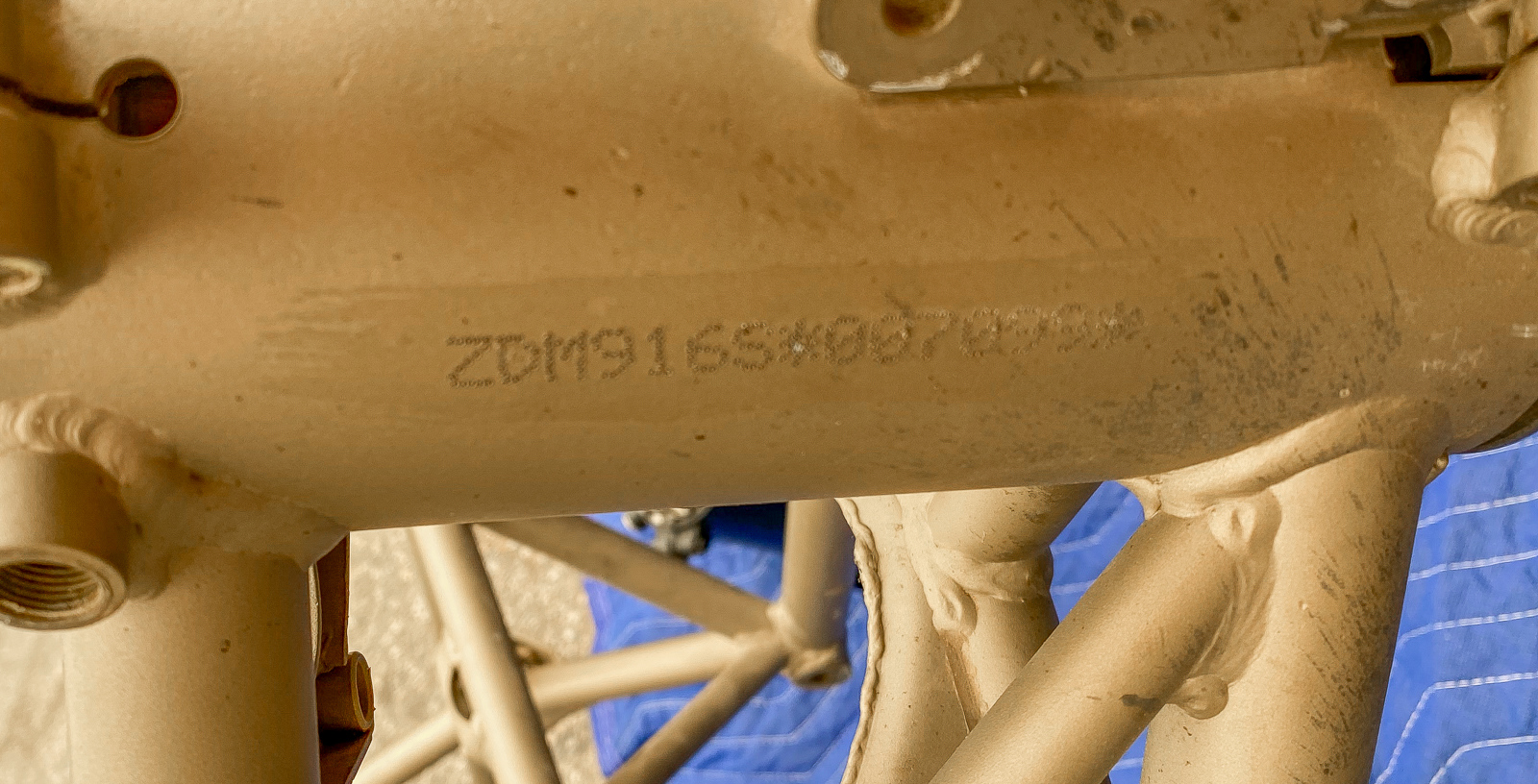 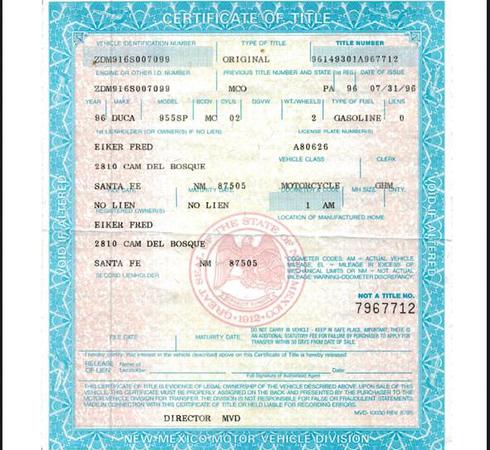 Fred sold it to the current owner in 2016. A different friend of Iconic knew the owner at the time and corroborates the above, adding the following details:
“A proper restoration would need to include an engine rebuild and fixing the frame as the frame/frame number is the soul of the bike. Pierobon is really the only one that could fix that frame as it needs to be repaired as well as straightened.”

“The forks he used have 65mm caliper spacing along with the 65mm calipers; the original spec is 40 mm spacing for the forks/calipers. It has replacement decals with the bright gold outline. The original early 916 decals had a darker bronze-ish outline and are not available anymore. When Ducati transitioned to the new graphics in 1998 they also changed to a new supplier for the decals so the replacement decals they made ended up having different colors. Small detail, but if someone is serious about restoring it properly they will spot that. In addition, the speedometer should be in km/h and the temp gauge in Celsius. So, the best candidate for a buyer would be someone who isn’t a collector and isn’t looking to try and get it back to original spec.”

“Falloon says there were 54 of these bikes made. Other sources say 50 and some say 51. The Ducati database shows 51 frame numbers assigned to the 916 SPA/955 SP ranging from VIN’s ending in 7068 to 7118. I think the proper number is 51, based on the database. Ferracci was the one that made the SPA happen (and who sold this specific bike). He was getting the prior year’s WSBK stuff to use in AMA and when 1996 came along he had access to the 955, but couldn’t race it in AMA unless Ducati homologated the engine. So they essentially took the 1996 916 SP3 and created a 955 version with the 955 engine. These were brought to the US with MSO’s that noted they were for race purposes only, like they did with the early SPS’s. Ferracci couldn’t sell 50+ of them so they took orders from other dealers as well. The AMA homologation rules required the bikes to be in the US for a specific amount of time, and once that time lapsed the bikes that were unspoken for shipped back out of the US and were sold in other regions where they had pending orders. There were only about a dozen that got spoken for by dealers in the US. Per an article in Fast Bikes magazine back in October 1996, there were 20 of them that left the US and were imported “new” via HT Automotive who had pending orders for all that they could get their hands on. So even though this was an “SP America” meant to homologate the engine in the US, only a small portion of the bikes got sold here in the US new.” We have confirmed with Ducati of Newport Beach that this was one of the SPA’s that was sold new in the US.

“HT Automotive was a dealer in the UK, they sold the 20 in the UK. HT wasn’t an official Ducati dealer, but somehow got involved in deals like this. Cagiva North America sold the 20 bikes to HT. There must have been someone at HT with a strong relationship with Ducati. The article noted that the official Ducati dealers in the UK were really unhappy with this as they were never told these bikes would be sold new in the UK.”

“These were particularly popular outside of the US because in 1996 the US base model 916’s were monoposto, but outside the US all of the 916’s were biposto in 1996. So people outside the US were highly interested in the monoposto as those looked more like race bike…and their only option to do that in 1996 was the 916 SP3, which sold out quickly and I think there was still a lot of demand and those that couldn’t get an SP3 jumped at the chance to get the SPA. So maybe these didn’t sell as well in the US as the US already had the monoposto and other than the white tail the US base model monoposto looked the same as the SPA.”

“On the bike you have, the big sticker on the ECU is the production sticker that Ducati put on the headlight when they made it. Typically those got thrown away, so it’s cool to have that. The number written on it is just a random number to track the bikes they made. Ducati typically didn’t build the bikes in the order of the frame number sequence and probably not in the order of that number handwritten on the production sticker. I think that handwritten number was probably just a tracking number that they used for quickly referencing which bike was which.” 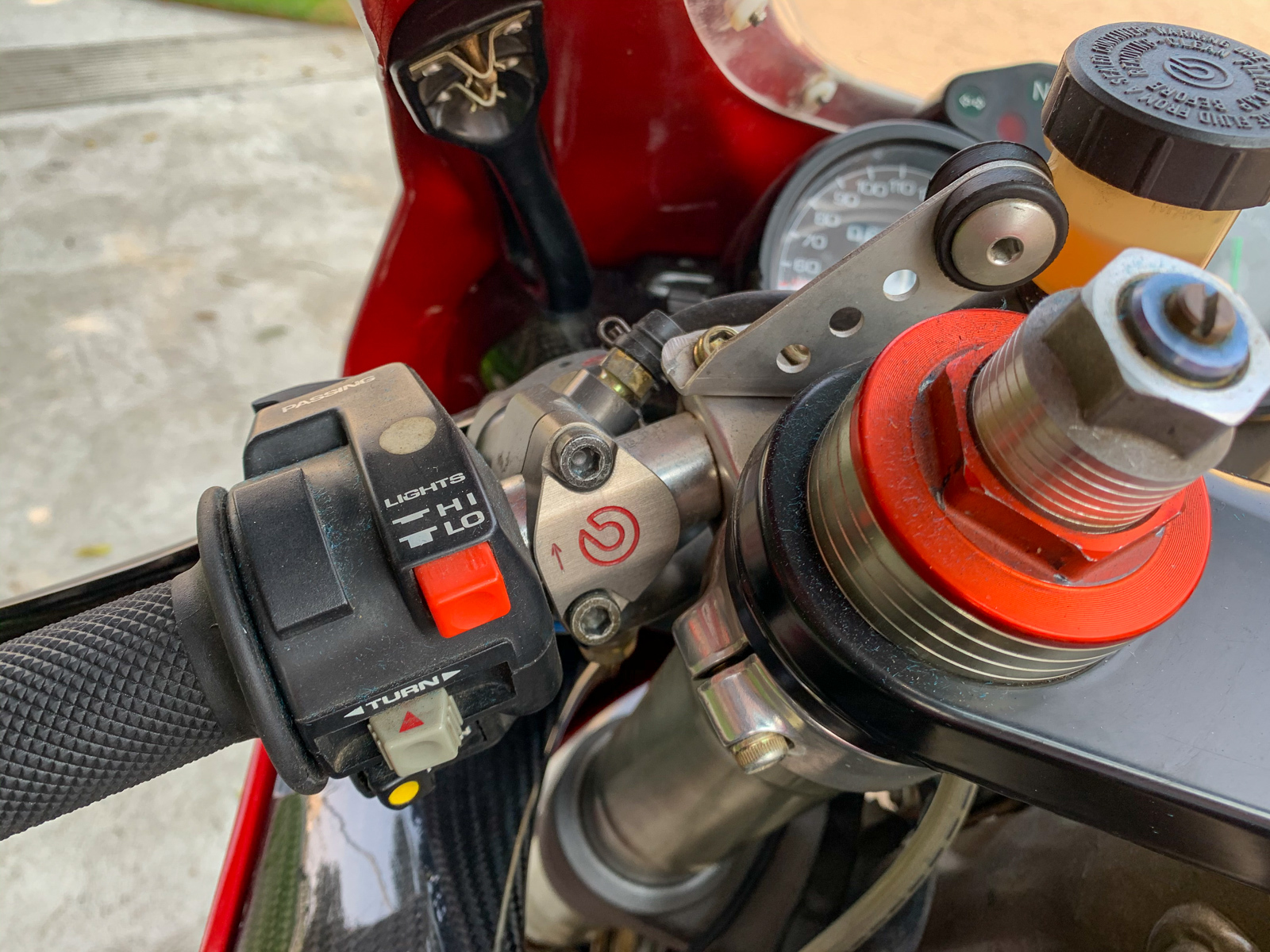 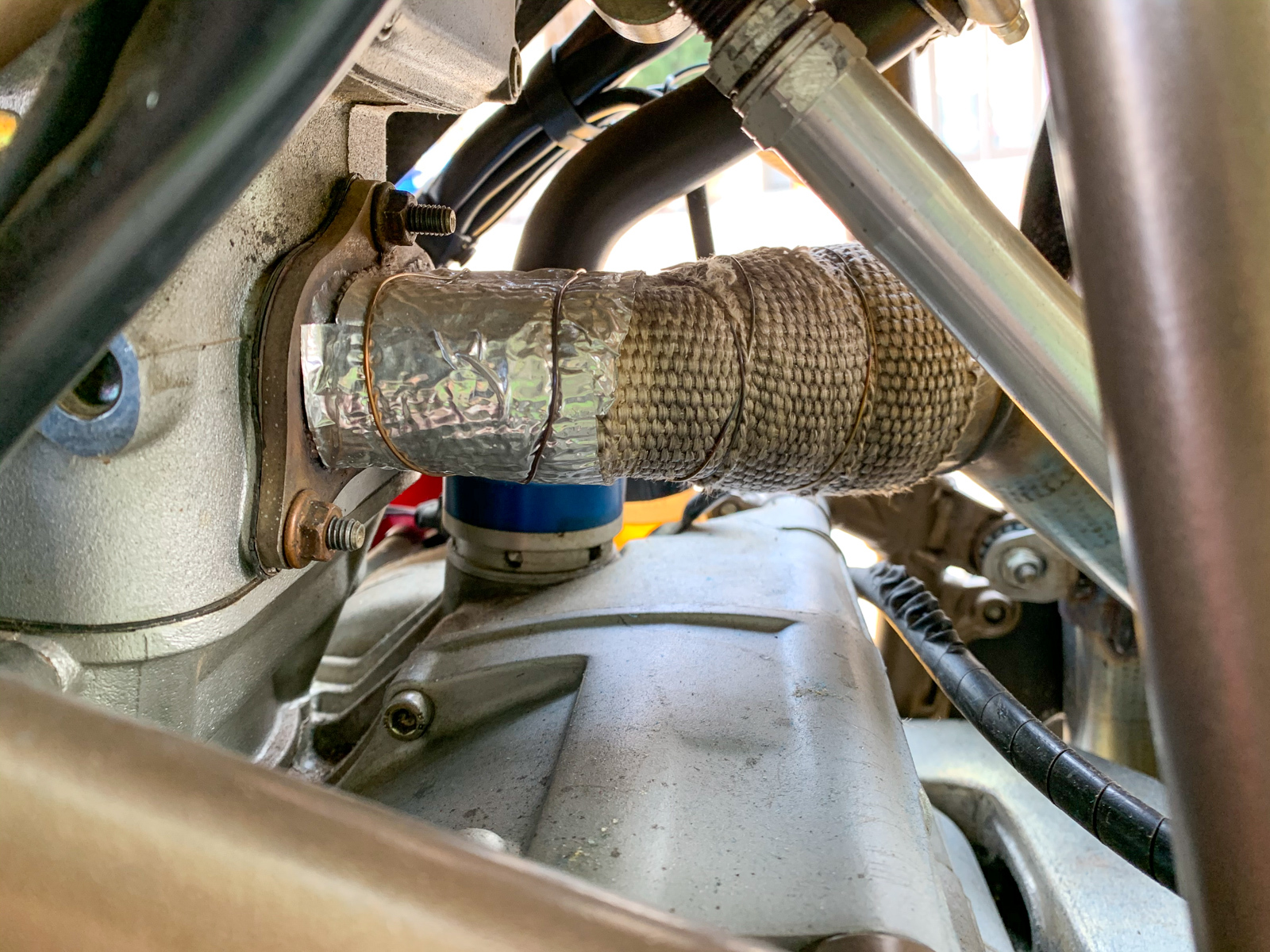 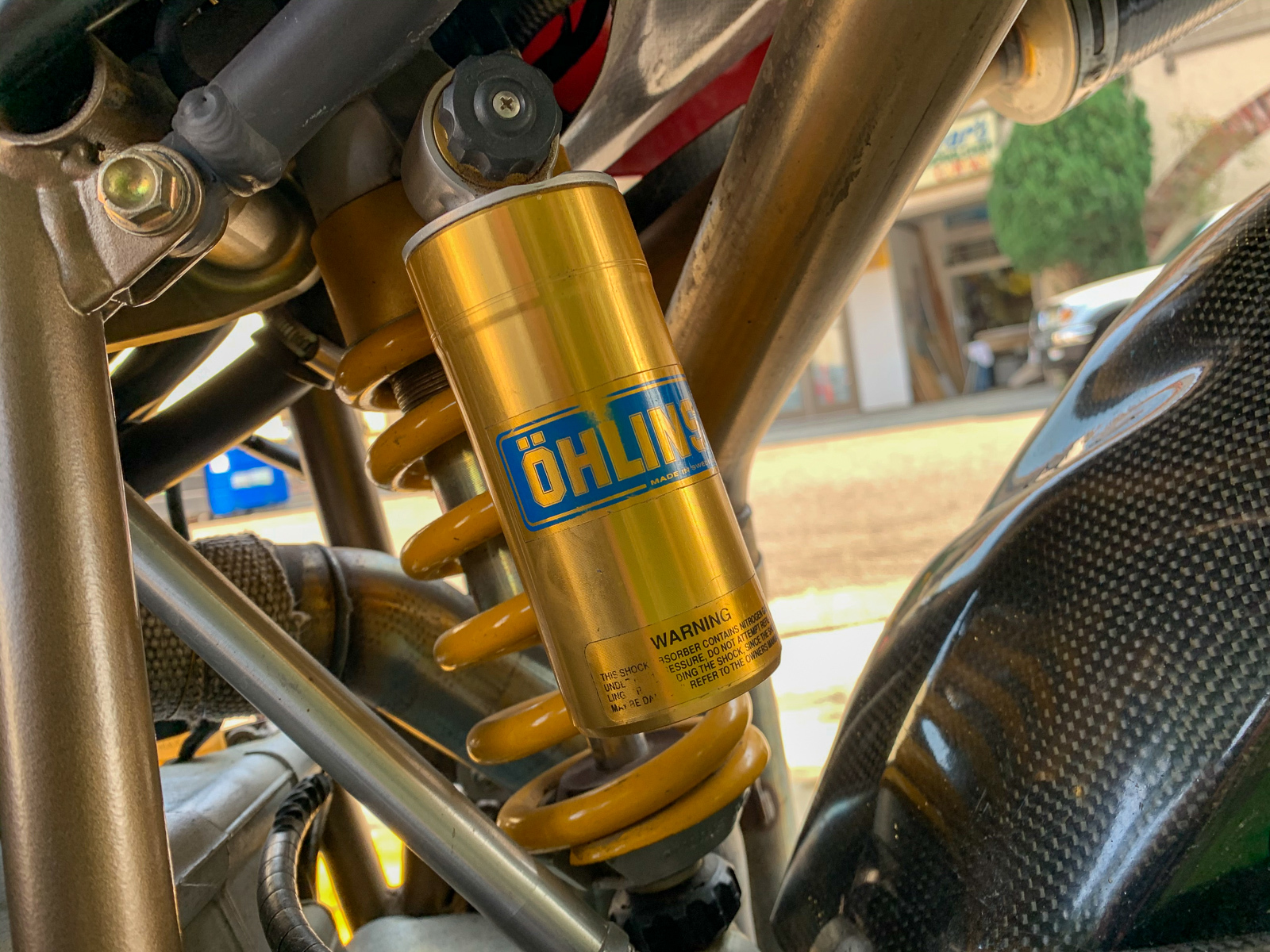 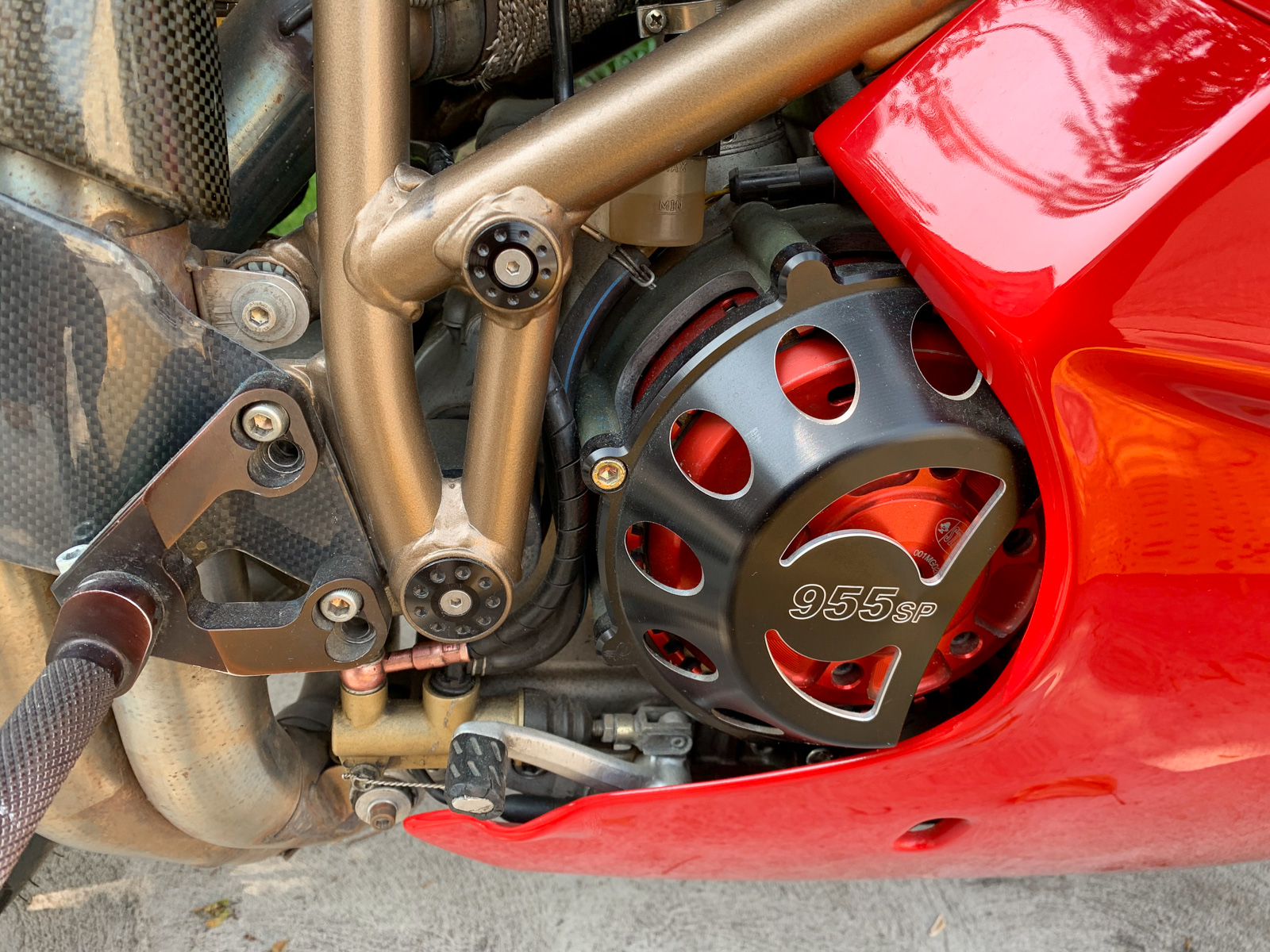 Cosmetic Blemishes: photos of all known cosmetic issues are included in the album up top.
The chromate finish on the aftermarket Marchesini wheels is significantly marred. The sale includes three spare wheels, one of which looks to be the stock rear.

There is a hole in the carbon fiber rear fender.

This is a very rare machine with some stories. We had keys made for it today and were able to confirm that the engine turns over. While it is offered on a Bill of Sale, we can help source a title with some patience as the DMV is currently behind. We hope to find this a new home, and our White Glove service would be glad to assist if the next owner would like to bring it back to life. We have a good relationship with Boulder Motorsports in Colorado (the US importer for Pierobon) so we’d be happy to work with them and try to get Pierobon of Italy to get this very desirable frame sorted for the restoration!