Additional photos of this Ducati 748 are available here for your perusal.

In 1994, the Ducati 916 was born as a fully faired sport bike, featuring a 916cc fuel injected, 4-valve, desmo, liquid-cooled, 90° V-twin engine wrapped in a trellis frame with a single-sided swing arm and USD forks. It is frequently cited as one of the most beautiful motorcycles ever. The 916’s water-cooled engine was a revision of that of its predecessor, the 888. The 916 was a smaller motorcycle than the 888, with a chrome-moly trellis frame which was shared with the Ducati 748 in 1995 and beyond.

To the joy of American riders in 1997, Ducati finally decided to import the 748. Considered a baby brother to the 916, Ducati’s 748 has been the darling of the European motorcycling press since its introduction. The 1984 Ducati 748 is identical in almost every way to the 916, both creations of Ducati in-house designer Massimo Tamburini, and both sharing some design elements with the Ducati Supermono. The only differences were rear tire size (180/55/17 as opposed to the 916’s 190/50/17) and engine capacity (88 mm bore and 61.5 mm stroke) of 748. The engine’s shorter piston stroke also gives a higher rev ceiling of 11,500 RPM, and the smaller pistons and lightened flywheel help the L-twin engine build revs quicker up to a peak horsepower output of 95.

One available color for the 748 was “I can’t believe it’s not butter” yellow (1997 was the final year for this striking yellow/white livery) with the single-seater’s white pseudo-number plate tail section. The wheels, like the frame, are a bronze/gold color. Not only do they look great in combination with the yellow paint, but also more importantly, they hide brake dust and road grime. The weight of Ducati’s 748 is just over 400 pounds, but it feels much lighter. Sporting hollow 3-spoke light alloy wheels, Showa suspension components and Brembos all around, the 748 was a striking and capable 750-class sportbike.

Ducati had the Japanese manufacturers beat in a couple of design tricks with the 748. For instance, the positive terminal of the battery is easily accessible through the right body panel air vent, so you can hook up a trickle charger for storage season without removing any bodywork. And when you do remove the bodywork, it comes off with Dzus fasteners. Additionally, Ducati chose to make the vast majority of other fasteners one of three allen wrenches for fairly major servicing.

While the stock wheels are included, this 748 has some beautiful period-correct Dymags.

The other only non-stock part is the Remus exhaust. 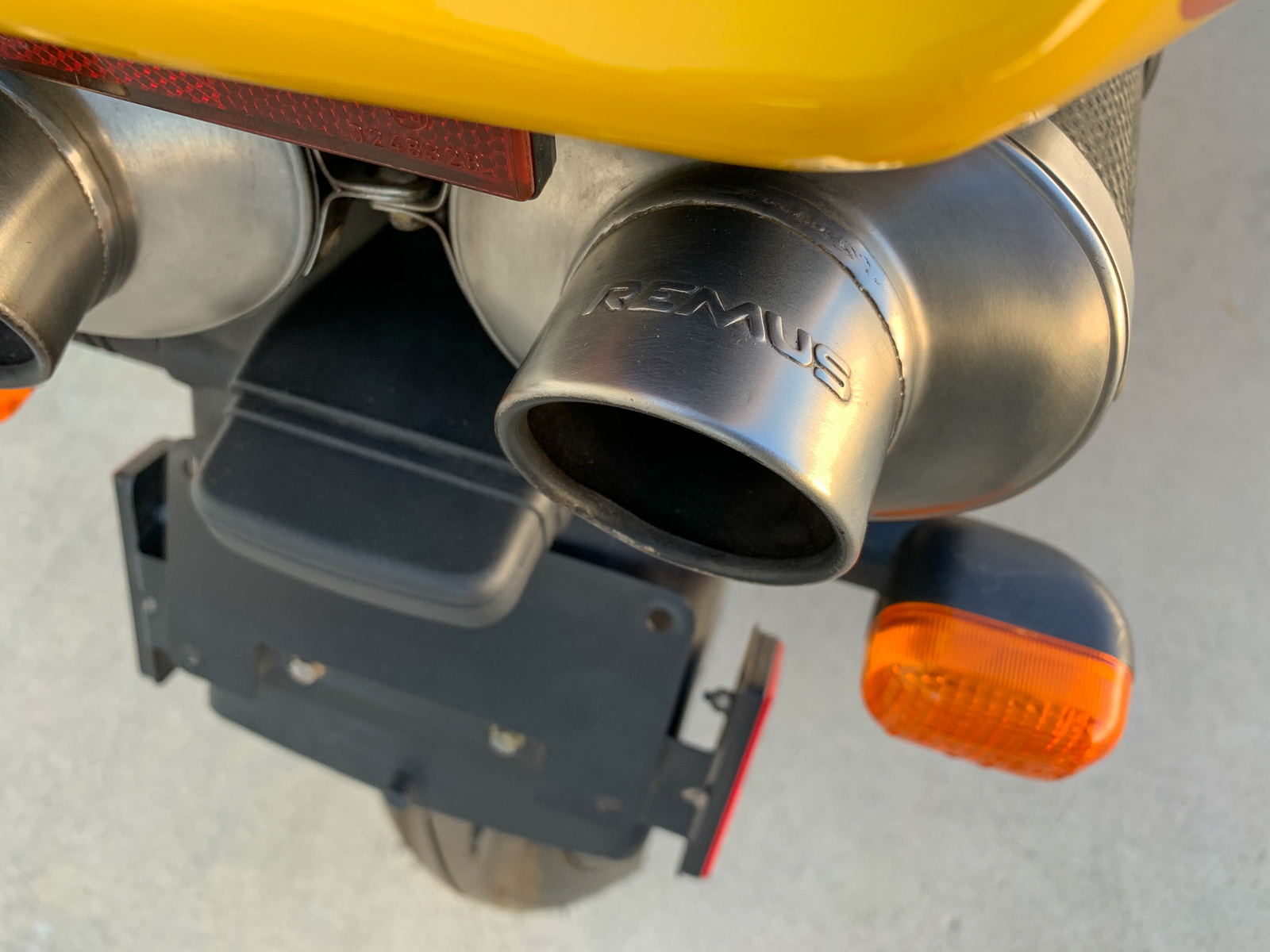 Otherwise, this is highly original – finding a 748 with the OEM signals, reflectors, and an intact rear fender can be difficult. This has all of those parts and t’s in excellent cosmetic condition. Adam rates it a 9 out of 10 as there are just a few cosmetic issues that belie this Ducati’s 20+ years of use. The most noticeable issue is a series of small scratches on the tail, though there are also small chips in the tank, fairing, and rear wheel. Photos of everything we could find are included in the album up top.

The only paperwork we have is this California title from 2011 from when the bike was with Ace Motorsports of Concord, California.