Click here for an instaVIN Motorcycle History Report on this 1997 Ducati 916.

Additional photos for this 916 are available here for your perusal. Please let us know if you require any more photographs!

Ducati’s 916 was quite possibly the most important model ever produced by the Bologna firm. First released in 1994, the motorcycle set a new standard in the sportbike realm and ushered in the modern superbike design era. Penned by the “Michelangelo of Motorcycles”, Massimo Tamburini, the sheer performance prowess of the Italian two-wheeler, combined with its breathtaking aesthetics, made it more than just a wildly popular model. The 916 is truly iconic.

The story of the 916 essentially started in 1985, when the VM Group sold Ducati to Cagiva. The head of Ducati’s new parent company, Claudio Castiglioni, green-lit the development of a more modern sportbike with four-valve heads and liquid-cooling. The assignment was given to the firm’s then technical director, Massimo Bordi. For his thesis project, while studying engineering at the University of Bologna, Bordi had designed his own four-valve head engine using desmodromic valves and a Cosworth chamber.

More than a decade later in 1986, Bordi led an official project at Ducati, implementing the design from his thesis on to a race bike by stacking a custom three-quarter-liter, liquid-cooled, quad-valve top-end on Pantah cases. This ultimately gave way to the Desmoquattro engine, before eventually resulting in the creation of the 851 superbike. One of the first production models bestowed with electronic fuel injection, the 851 was soon followed by the even more advanced 888 model.

The 888 was a solid performer and was an early adopter of many features that later became the status quo on production bikes. Unfortunately, sales were less-than-satisfactory, and Cagiva chalked this up to the 851/888’s appearance not strongly resonating with customers. So, brothers Claudio and Gianfranco Castiglioni tasked Massimo Tamburini (who at the time worked for the Cagiva Research Center) with restyling the triple eight and transforming it into a decidedly more attractive offering — something Tamburini did in spades. 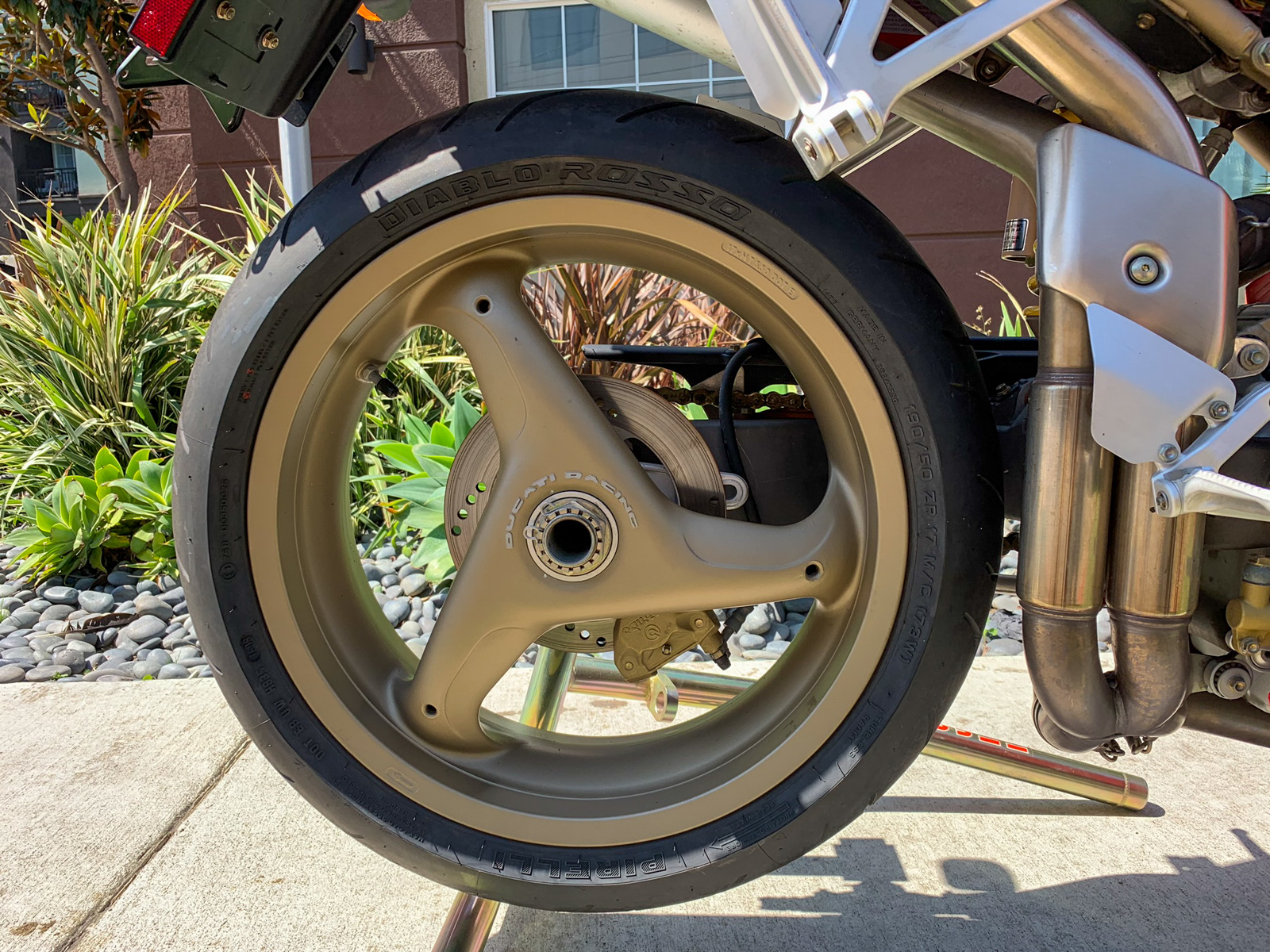 Building off of the 888’s chassis design, Tamburini modified the trellis structure, utilizing the L-Twin engine as a stressed member and bolstering cornering by shortening the wheelbase. Tamburini then proceeded to pen the 916’s epochal bodywork. The bike featured a sleek full fairing with a pair of dual-projector headlights, while out back a racy suspended tail section rested above the superbike’s dual underseat exhausts. 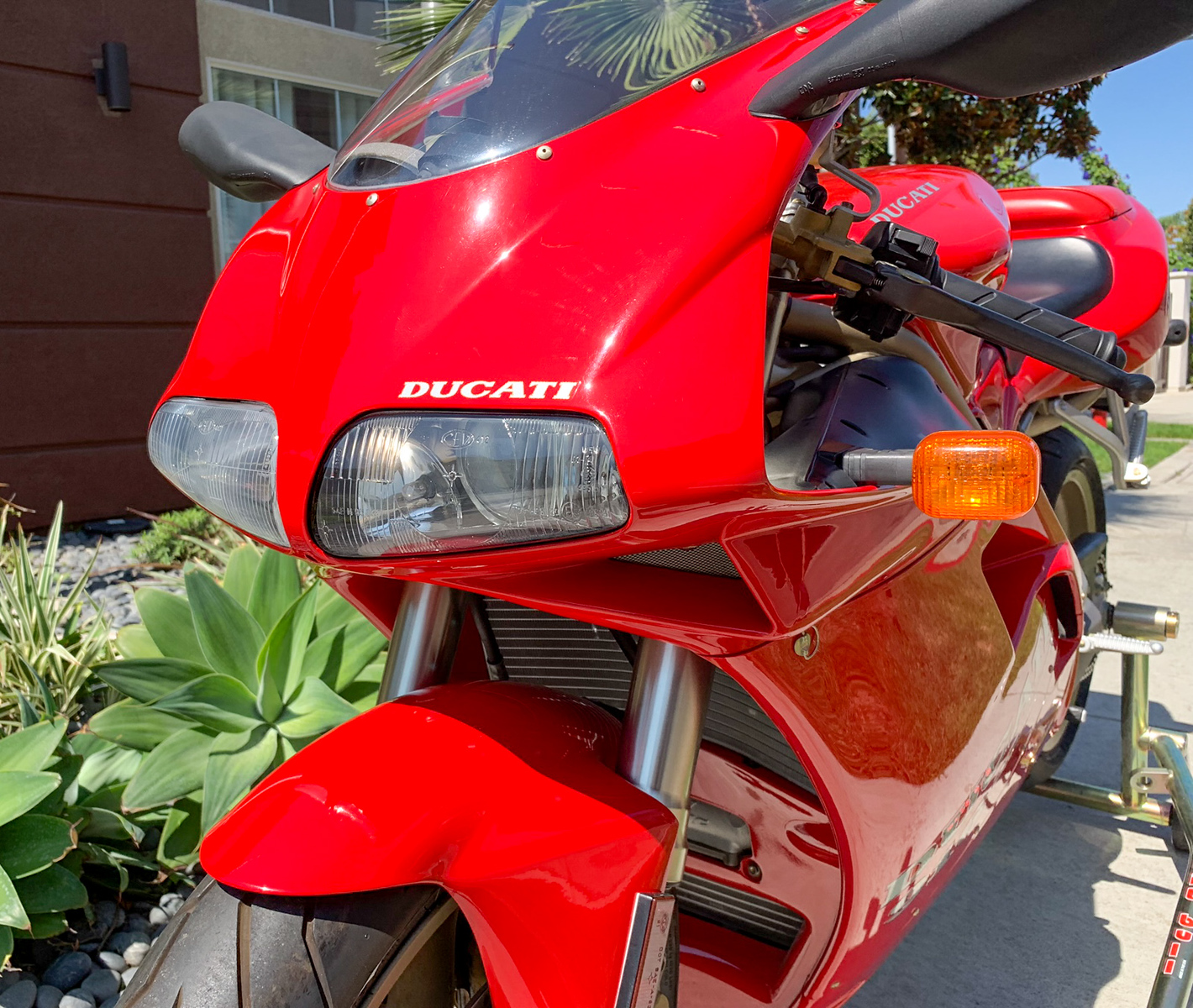 The 916 was a radical departure from the more boxy sport bikes coming out of Japan at the time. When observed from a bird’s-eye view, the 916’s outline is reminiscent of a woman with an hourglass figure – or as a wise man once said:

While the 916 undeniably boasts an original design, Tamburini never denied the fact he borrowed certain visual traits from the Honda NR750, such as the tail section, under-seat exhaust, and single-sided swing-arm. Speaking of the swing-arm, the 916’s unit was clearly derived from Elf’s patented Pro-Arm design (which Honda owned) though Ducati managed to rework it just enough to legally skate by.

While Tamburini handled the general design, Bordi was responsible for the development of the 916’s engine. Bordi delivered an evolved version of the 888’s L-Twin, with a longer stroke (66mm), resulting in its successor’s 916cc, fuel-injected, four-stroke, 90-degree, L-Twin with liquid cooling, Desmo valves, four-valves-per-cylinder, and a six-speed transmission with a dry multi-plate clutch. Bordi’s engine generated 114hp at 9,000rpm and 66ft-lbs of torque at 7,000rpm. Tipping the scales at only 450 lbs wet, the potent L-Twin was capable of firing off standing quarter-mile runs in 10.6-seconds and reaching speeds of around 160 mph.

Paired with Ducati’s trademark steel trellis frame were a pair of 43mm inverted Showa forks and a mono-shock in the rear. Dual front Brembo four-pot calipers and 320mm discs (and a single 220mm disc bit by a twin-piston caliper in back) constituted the braking hardware. Brembo also supplied the 916’s three-arm alloy rims. With all the trick hardware, the 916 performed as good as it looked. Despite being a quarter-century-old, the iconic Italian superbike still holds its own surprisingly well against modern sports machinery.

To say the 916 was dominant in high-level racing would be a serious understatement. In its first year, Ducati was able to steal the crown from the reigning champ, Kawasaki, and from ’94 through ’99, five WorldSBK championship titles were achieved on a 916, not to mention countless other wins in regional events in Europe, Australia, and the US. Troy Bayliss also secured an additional world championship in 2001 riding the 916’s successor, the 996.

When they first rolled into showrooms, the 916 carried an MSRP of $14,995 which translates to just shy of $26K today when accounted for inflation. According to Ducati’s official records, less than 2,600 916 units were sent to US shores between ’94 and ’99 — more than 1,000 of which were earmarked for California. If you include the special edition versions — SP, Senna, SPS, etc — than the total production volume jumps by another few hundred.

This particular 1997 916 example (VIN: ZDM1SB8S8VB009156) is in remarkably clean condition with less than 300 original miles on the clock. Dressed in the Bologna brand’s deep red livery, this specimen is plated for use in California and comes with its original factory tool kit.

The debut of the 916 hugely altered the public’s perception of the Cagiva-owned outfit. After the 916 was released, you started hearing Ducati referred to as “The Ferrari of motorcycles”. A timeless and iconic model, the 916 had all the makings of an instant classic, and despite only being a few years old at the time, was invited to be displayed at the Guggenheim’s “Art of the Motorcycle” exhibit in 1998. It really is hard to overstate the significance of Tamburini’s design and the overall impact it’s had on motorcycling.

Visor Down summed up the 916 nicely by stating, “never had a motorcycle provoked such feelings of pure lust or been so coveted. Here was sex made metal, a Sophia Loren in cro-mo steel and alloy. Slim and curvy, the 916 took the breath away from any angle and redefined how a motorcycle could, and should, look.” Here’s your chance to get one of the lowest mile examples of “sex made metal” around.