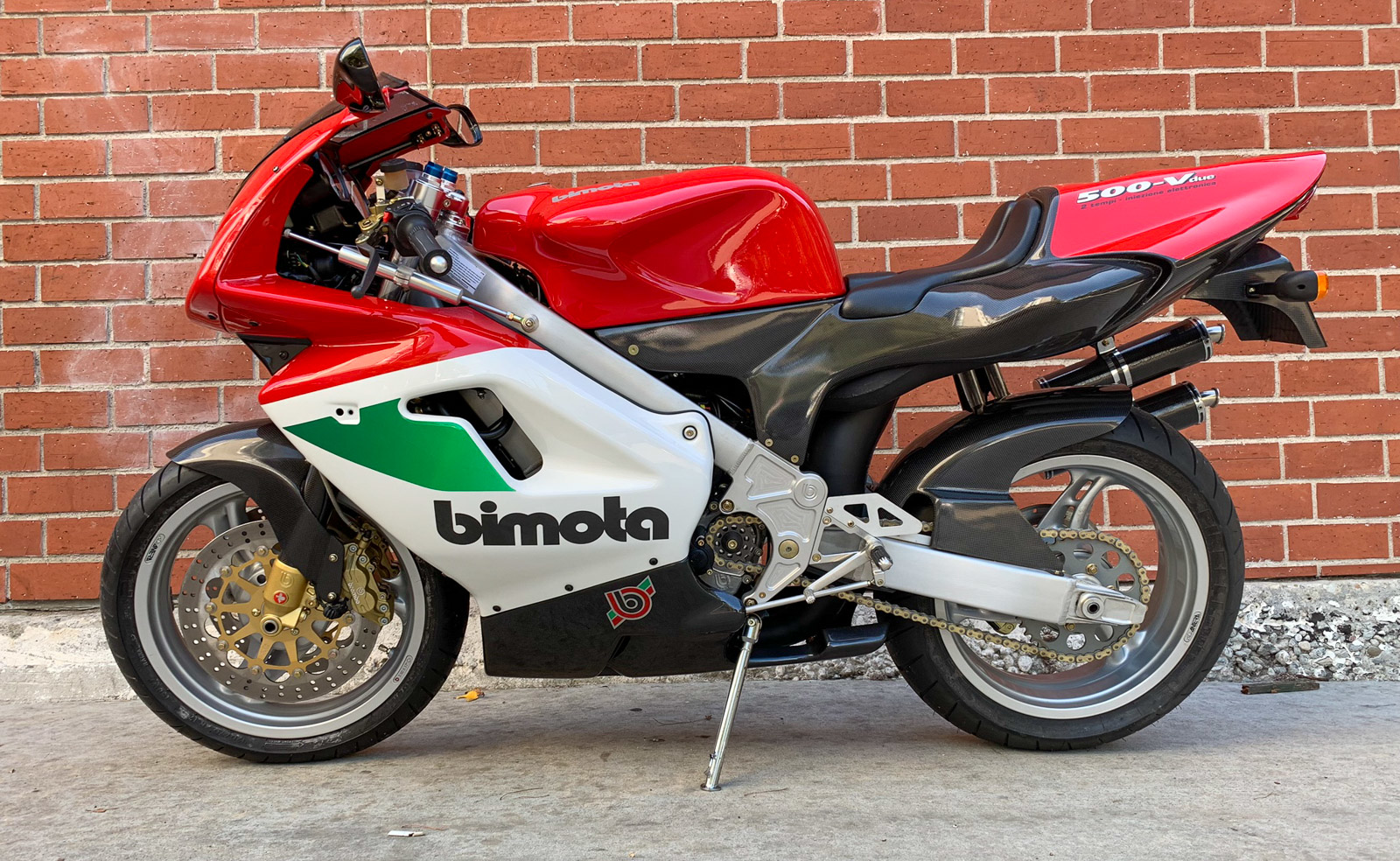 A full photo gallery for this Bimota is available here for your perusal. Please let us know if you require any additional photographs!

By the early ‘90s, Bimota had been in operation for around two decades, and while it had certainly built some incredible bikes in that time, the boutique marque had typically depended on existing powertrains from other manufacturers. So Bimota brought on two-stroke specialist Aroldo Trivelli of TAU Motor to design a two-stroke V-Twin.

Originally, the Trivelli-designed power plant was to be housed in a frame similar to the Tesi with hub-center steering, though the idea was later scrapped. Instead, Bimota tasked its engineering chief Pierluigi Marconi with developing a more conventional chassis for the half-liter twin. Marconi delivered an incredibly light trick oval-tubed aluminum twin-beam frame that utilized the engine as a stressed member.

Around this same time, Bimota abandoned its prior plans for a GP racer and decided the new two-stroke V-Twin would be a road-legal production model. Obviously getting a two-stroke race engine to meet the necessary emissions standards to be released as a road-going production model was a wildly tall order, but Bimota felt the solution was in fuel injection.

Instead of simply swapping the carbs out for throttle bodies, Bimota designed a sophisticated direct electronic fuel injection system, allowing for an even lighter overall package. It was close and it surely wasn’t easy, but the Italian company managed to squeak by and get the green light for production. After eight years of development, Bimota finally unveiled the highly anticipated new model in 1996. Dubbed the “V-Due” — Italian for “V-Twin” — the bike was glorious. A half-liter two-stroke GP bikes for the street, brimming with race-grade hardware and amenities. After generating an enormous amount of hype, the V-Due entered production and dealerships the next year in 1997 as the first-ever production two-stroke motorcycle with electronically controlled direct fuel injection.

Powering the road-legal track weapon was a liquid-cooled, 499cc, two-stroke, 90-degree V-Twin good for 110 hp and 64 ft-lbs of torque. Bimota’s first engine produced in house, the Italian twin afforded the V-Due a 155 mph top speed and a 10.5-second standing quarter-mile time. Tipping the scales at only 320 lbs, the V-Due boasted a phenomenal power-to-weight ratio. The powertrain also got a dry clutch and racey six-speed cassette-style transmission. 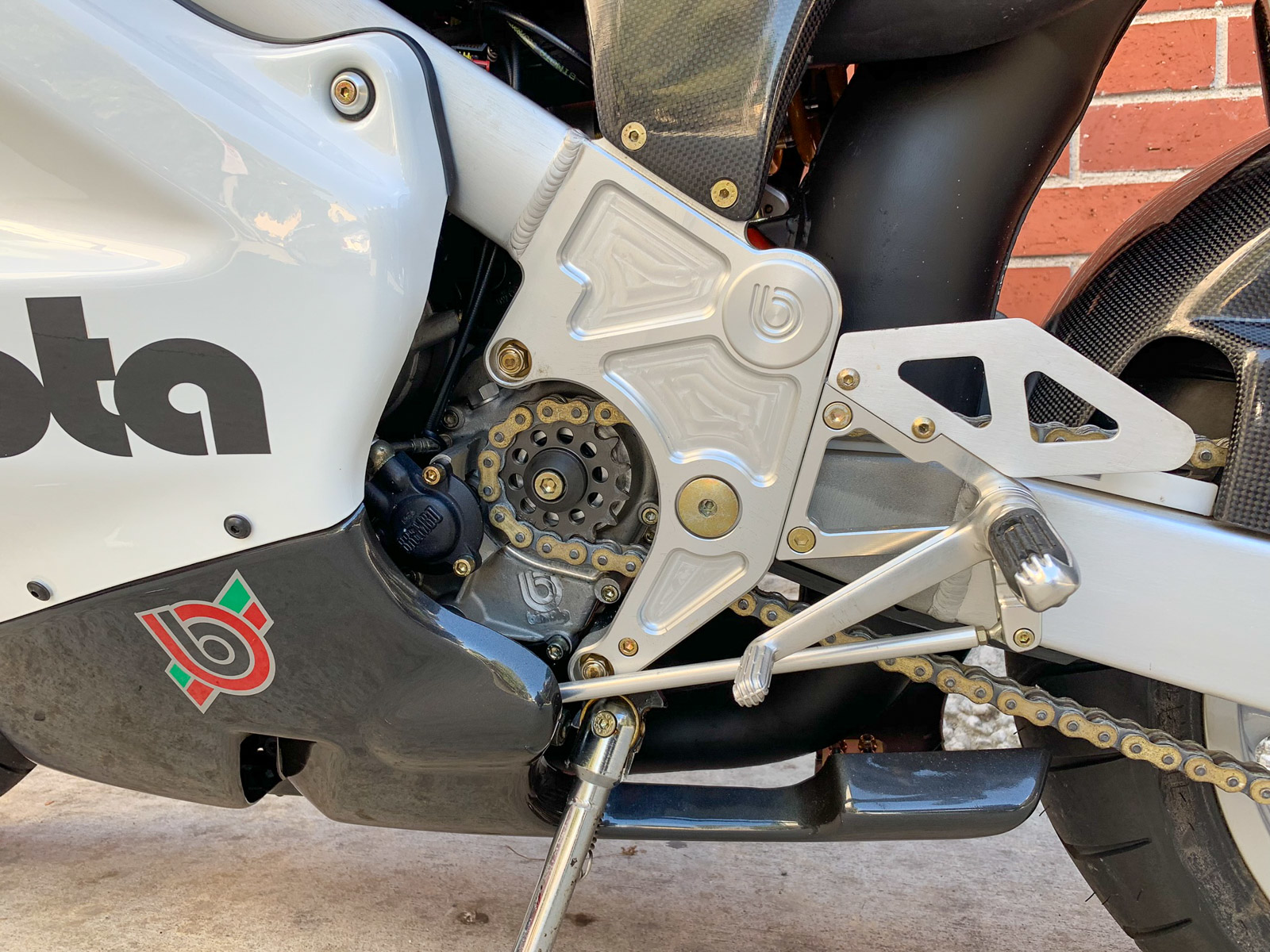 Braking hardware was comprised of Brembo Goldline calipers and dual 320mm front discs with a single 230mm unit in the back. Suspension components consisted of fully adjustable 46mm Paioli fork with carbon fiber fork tubes and an Ohlins mono-shock. The wheels were lightweight alloy units from Antera, that came from the factory wrapped in Pirelli rubber.

Exotic and exclusive, the V-Due also featured a slew of swanky carbon fiber and billet parts. Elements like the rear-sets and triple clamps were all CNC’d, and the shock cover, license plate board, from covers, front and rear fenders, and exhaust hanger are all carbon pieces.

Even the V-Due’s bodywork — which was inspired by GP bikes of the era and designed by Sergio Robbiano, protege of the great Massimo Tamburini was made of carbon fiber. Other noteworthy aspects include Domino grips and throttle, a beautiful aluminum swing-arm stamped with the Bimota name, and a race-style dual carbon fiber two-stroke exhaust system.

Unfortunately for Bimota — which had invested untold amounts of money in the near-decade-long development of the V-Due — its new two-stroke didn’t pan out as it’d hoped. The direct fuel-injection system that was the model’s savior ended up being its demise. The first 150 units produced were seriously finicky. Customers regularly reported misfires, spark plug issues, oil leaks, seized pistons, and unpredictable power deliver (especially below 5,000 rpm). For an excellent recap of the V-Due’s history, check out this story on OddBike by Jason Cormier.

With such an exorbitant MSRP and all the mechanical problems, it wasn’t long before customers started returning their V-Dues. Bimota’s projections called for some 500 units to be built, though less than 200 of the original fuel-injected models ever left the factory. Bimota would later change to a 39mm Dell’Orto carb setup, though by that time the damage had been done.

Bimota’s financial problems were only exacerbated by offering to replace customer’s defective V-Dues with other models from its lineup like the SB6R and SB8R. When all was said and done, fewer than 500 examples were created. What was meant to be the dawn of a new era for the Rimini brand wound up forcing them to file bankruptcy.

Today, V-Due examples are incredibly rare finds and with so few produced, the majority of specimens are in the hands of collectors. The faulty powertrains resulted in most surviving examples having very few miles, but today we have something even better on offer; a V-Due with 0 miles. It has never been registered or titled and is sold on bill of sale only. 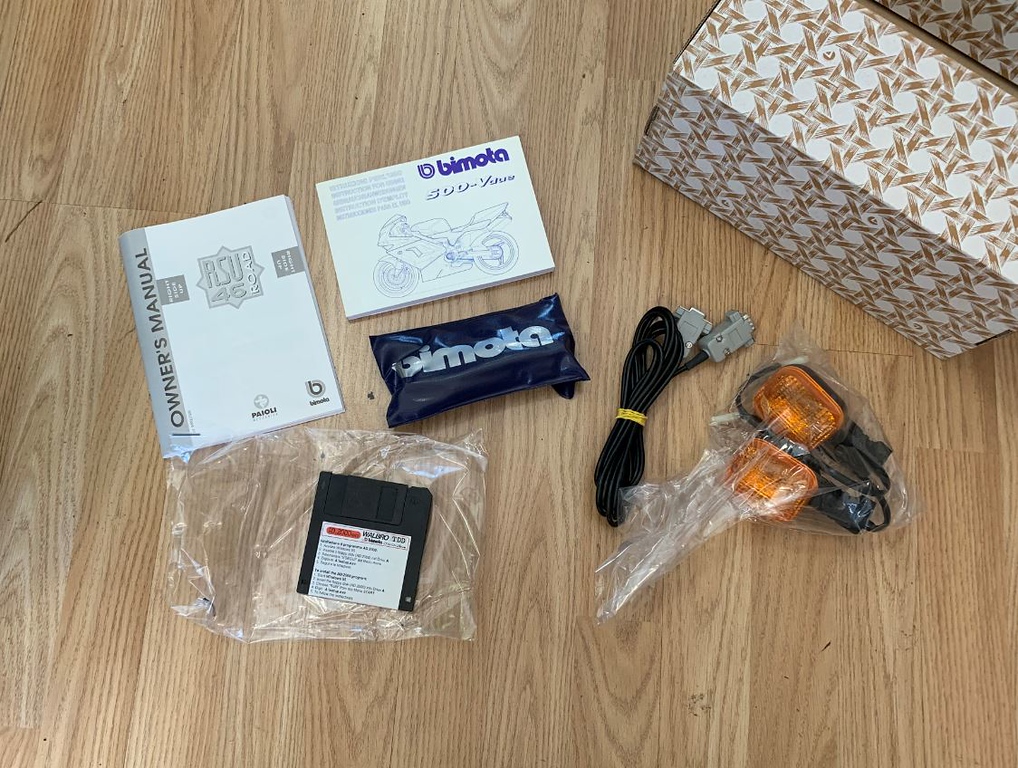 This 1998 example (VIN: ZESVT5000WR000224) at our headquarters in Marina del Rey, California is nearly pristine as no fluids have ever been introduced. As shown in the photo above, the front turn signals are included. We can mount them for you before you pick it up or simply include them in the sale, your choice.There are a few very minor imperfections (which can be seen in the photos) though this is still certainly one of the cleanest V-Dues in existence.