Additional photos of this Muzzy Raptor are available here for your perusal. Please let us know if you require any additional photographs!

Rob Muzzy is something of a legend in the motorcycle world. The AMA Hall of Famer started drag racing in the ‘50s before trying his hand at dirt track competition – all the while prepping and tuning his own machines. After a few decades of racing, Muzzy accepted a job as a mechanic in October of 1980, building and tuning engines for Kawasaki’s race teams. Not long after Muzzy became the lead wrench for Team Green, Kawasaki started winning. A lot. The Japanese marque bagged AMA Superbike Championship titles in ’81, ’82, and ’83, before Muzzy jumped ship to go work for Honda in ’84, who then won that year’s AMA Grand National Motocross Championship.

In the years that followed, Muzzy’s reputation as a crack wrench grew, leading to more opportunities and eventually prompting him to start his race shop in ’88 where he offered his WSBK-grade skills and services to the racing public. In 1990, Muzzy was contracted by Kawasaki once again, this time to form and lead the new Muzzy Kawasaki race team. The newly-formed team’s success further solidified Muzzy and Kawa’s already close relationship. 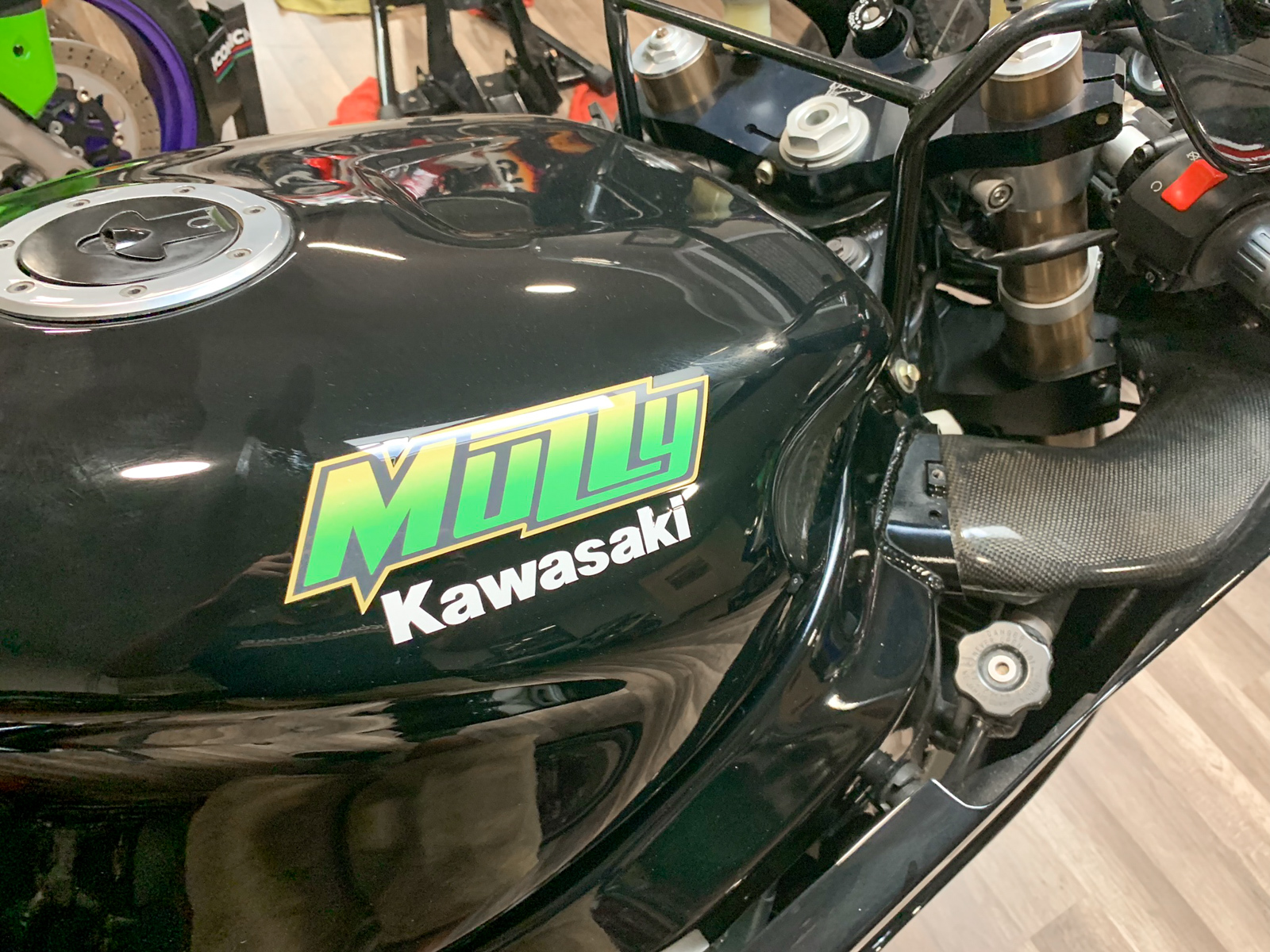 Muzzy then went on to become “the most successful engine builder and tuner in racing history” with some 21 AMA National Championships, four Daytona 200 wins, and a World Superbike Championship title, among quite a few other noteworthy exploits. Eventually, Rob had the idea of selling small-batch turn-key, professional race-spec bikes based on his WSBK machines. In 1997, Muzzy debuted the “Raptor”, which was essentially his highly tuned, super tricked out version of Kawasaki’s Ninja ZX-7R of the day that campaigned in Formula USA with the aim of dethroning Yamaha and its YZR500s.

Muzzy announced he’d be turning out 50 made-to-order units to privateers and the general public — though it’s rumored only 35 were ever made – with an $18,000 MSRP (which translates to almost $30K today). The 750cc machines put down more than 150 hp while weighing in at just 407 lbs. Not only was the Raptor more powerful than the 7R stocker, but it also handled markedly better, and tipped the scales at a full 65 lbs less than the ZX-7R (425 lbs dry versus the 7R’s 490).

Rob Muzzy himself explained the concept for the hopped-up model, saying, “The Raptor brings the ‘tuner-car’ concept to the motorcycle enthusiast. In the tradition of the Shelby Cobra, the Callaway Camaro, and the Saleen Mustang; the Muzzy Raptor takes a stock Kawasaki ZX-7R and refines it to meet the desires of the most sophisticated street rider, collector, or racer.” Rob actually went and toured Saleen to get a better sense of how to model his business. 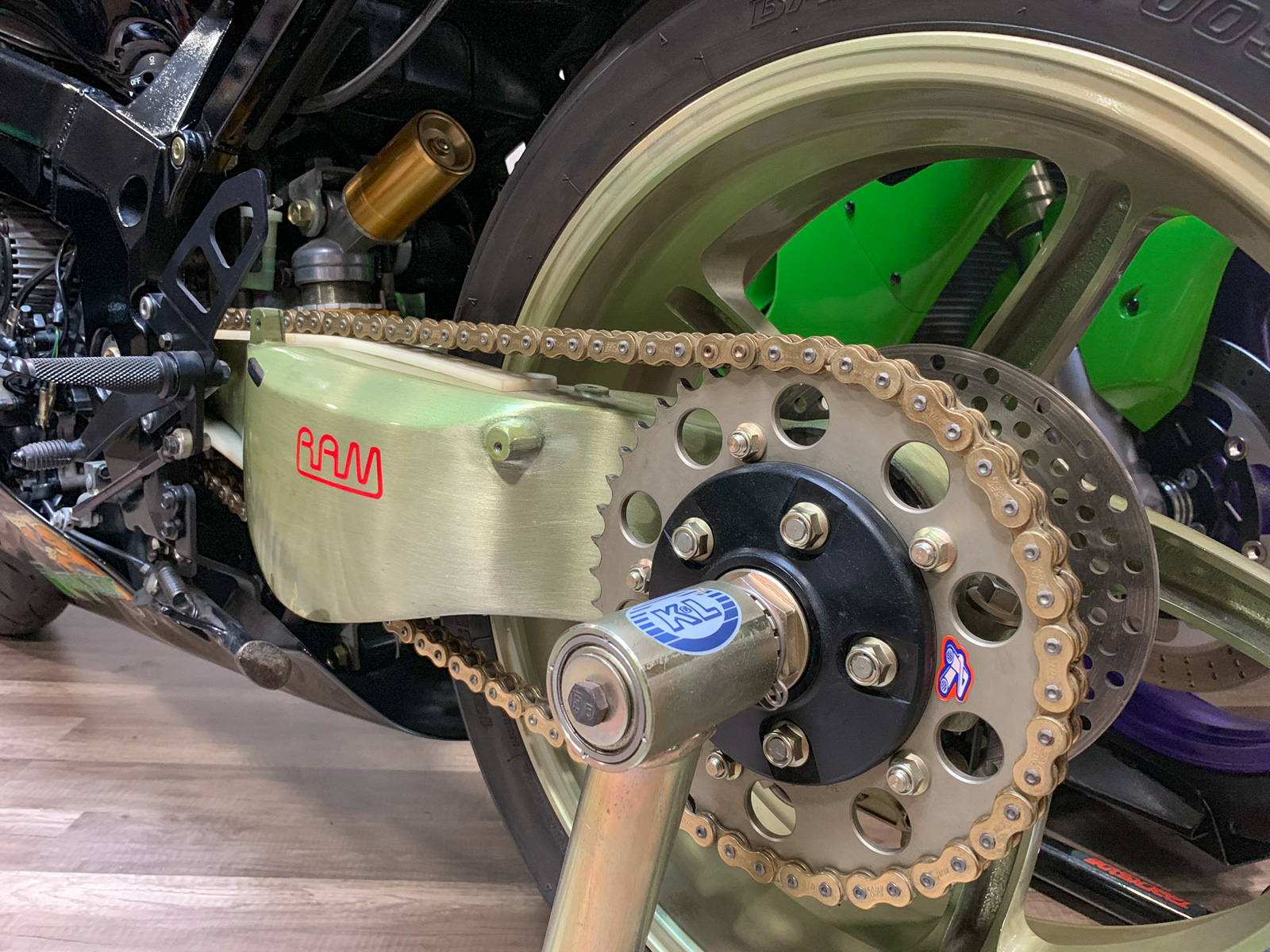 Though it was based on ZX-7R track bodywork, the Raptor also came suited up in its own specially-designed bodywork penned by Rob Muzzy himself and made in-house from carbon/carbon fiberglass. The Raptor’s front fairing boasted a pair of Suzuka-style fox-eye headlights positioned above a horizontal “catfish-style” ram air inlet. The Raptor also came with a trick full carbon fiber ram air-box and even a nifty little laser-cut carbon fiber key fob.

The Raptor was much more than just a special kit fitted to the bike at the dealership. The company didn’t offer the Raptor as a DIY kit either. If a customer wanted to get their hands on a Raptor, they would first have to purchase a new ZX-7R from a Kawasaki dealership, which would then ship the newly-purchased bike to Muzzy HQ in Bend, Oregon. From there the Kawa was taken apart and built back up using a plethora of highly-advanced, finely-tuned race parts by a special team whose only job was to make Raptors.

Another major highlight on the Raptor was its wide range of adjustability, a la Muzzy’s pro race machines. This included the rake/trail, wheelbase, seat height, swing-arm pivot, and wheelbase. Making the Raptor that much crazier was the fact it was fully street legal (at least in 49 of 50 states).

Doug Chandler, who won the 1990 AMA Superbike title on a Muzzy Kawasaki, described the “production” Raptor by stating that it was, “as close to riding a (AMA) Superbike that the average guy will ever be able to get.”

Today we’re offering up a museum quality 1998 Muzzy Raptor example straight from our personal vault. The seller acquired it approximately 5 years ago from a passionate Kawasaki collector out of Nebraska who unfortunately passed away in a motorcycle accident. The collector had two Muzzy Raptors but this was the better example as he had it recommissioned. Due to the previous owner’s passing we don’t have much information about the history of this Raptor, though it’s offered with a clean Nebraska title. If you have any questions, don’t hesitate to ask us in the comments and we’ll try to get answers from the current owner.

In the April 1998 issue of Sport Rider Magazine, the publication aptly summed up the Muzzy Raptor saying, “Once in a while, a bike will come along that not only stands out from the crowd by virtue of its remarkable performance, but also due to its sheer visceral appeal. A bike that, upon start-up, not only causes the rider’s pulse to quicken, but those around him as well. A motorcycle that basically grabs you by the throat, slaps you in the face a few times, and stamps the words ‘ABSOLUTE HIGH-PERFORMANCE: CAN YOU HANDLE IT?’ indelibly across your forehead when you twist the throttle. This machine is one of those bikes.”