Additional photos of this Ducati 996RS are available here for your perusal.

We take a lot of pride in being able to offer some special motorcycles, but this one is on another level. This is one of the two bikes that John Reynolds campaigned to win the 2001 British Superbike Championship with!

In 1999, Ducati built 12 996RS racebikes and sold them to customers for approximately $240,000 a pop. They were based on the 916 SPS Fogarty Replica (not offered in the US), which Ducati sold to homologate a frame with a lowered cross brace frame tube to allow a larger airbox. 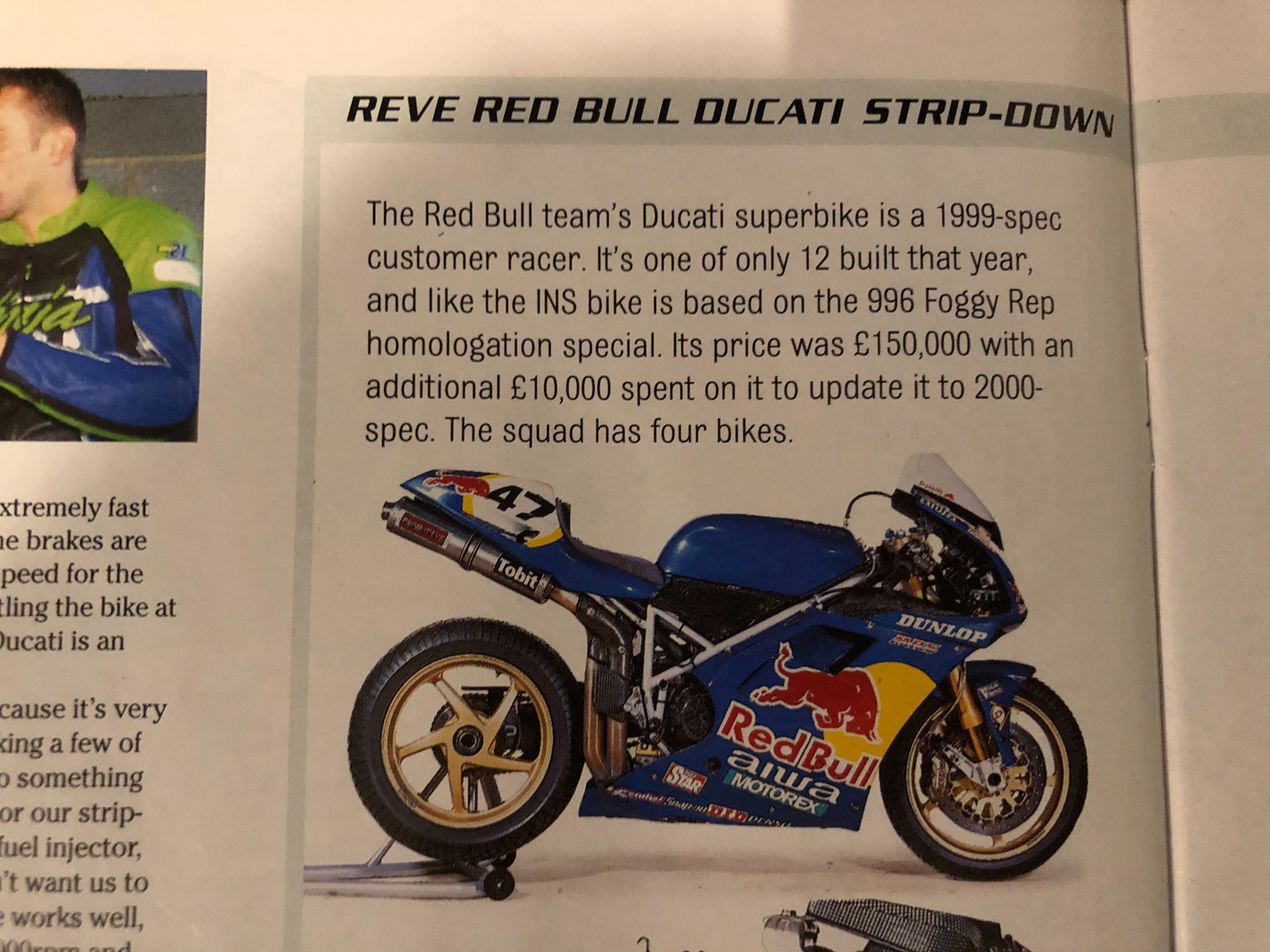 This was one of four machines that Ducati Corse sold to the Revé Racing UK – Red Bull Ducati Team on March 23rd of 1999. We have a copy of a letter attesting to this, signed by Paolo Ciabatti – 20+ years later, he’s still the Sporting Director of Ducati Corse. 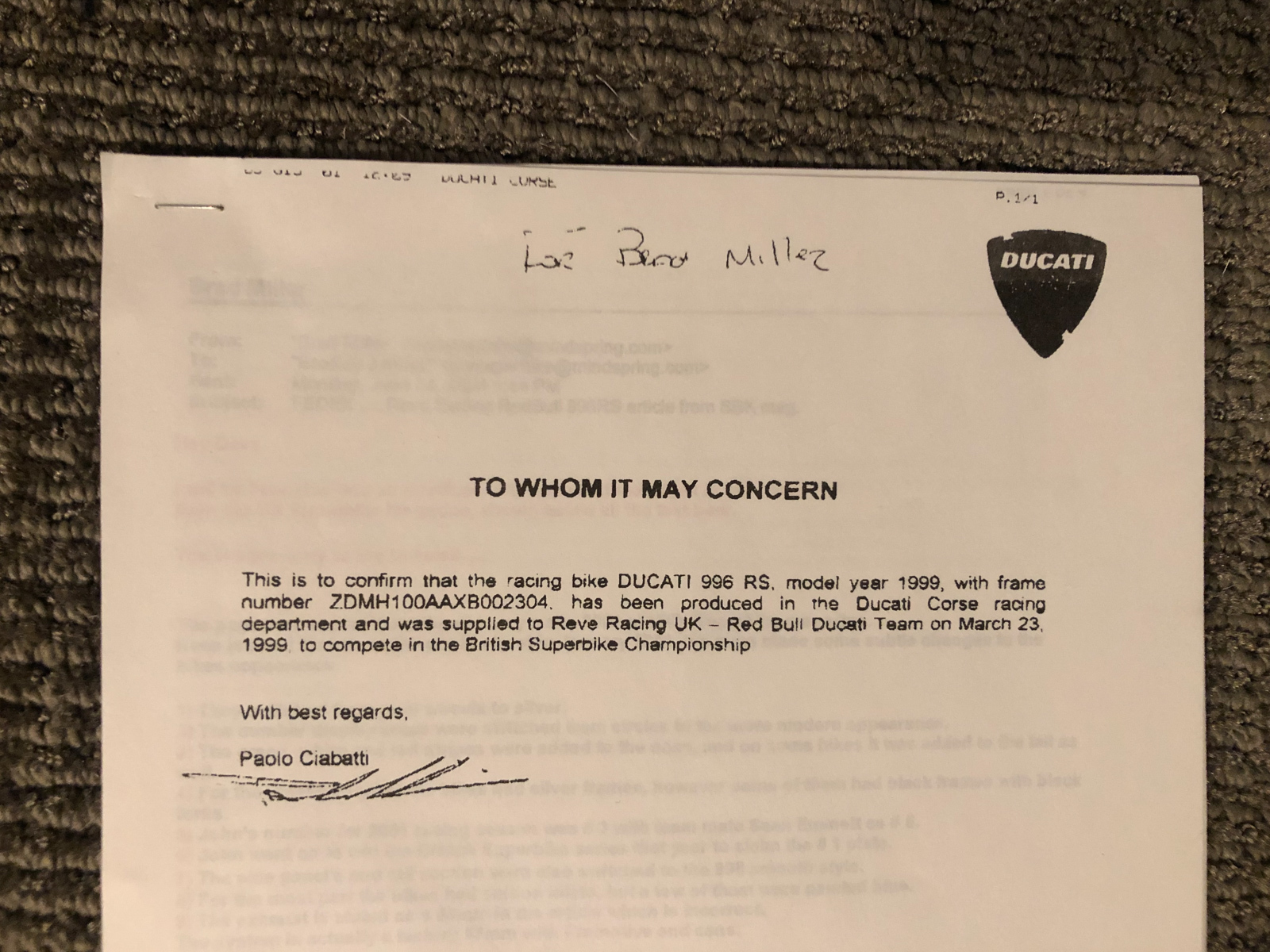 The racebikes were not used at all in 1999, and were updated to 2000-spec at the approximate cost of $16,000 before being campaigned in the 2000 season. In 2000, John Reynolds scored points in every single BSB race. In 2001, he won the entire championship with 12 podiums and 12 race wins. This bike also competed in two rounds of World Superbike in 2001 under #60 – Donington Park and Brands Hatch. After John won BSB, he switched to Rizla Suzuki.

The sale includes several historical photos over the bike’s lifespan, a 996 RS spare parts catalog, and a copy of the British magazine Superbike in which they have a wonderful comparison of several BSB racers, including a Reve Ducati 996.

Additional paperwork included in the sale suggests that some of the figures published in the Superbike were intentionally misrepresented as “teams never want to divulge the actual stats of what the bike produces” – some quotes in the article itself allude to that, such as “Reve are up to something sneaky, though, and wouldn’t take off the fuel tank for our strip-down photographs” and “the motor’s compression ratio is not something team is willing to divulge and quote a lowly 12:1“. The real compression ratio is said to be over 14:1. The article also states that peak power is 162 bhp, while the real number is 189 bhp. That would be why this bike was clocked at 202.63 miles per hour down the Bentley Straight at Snetterton. 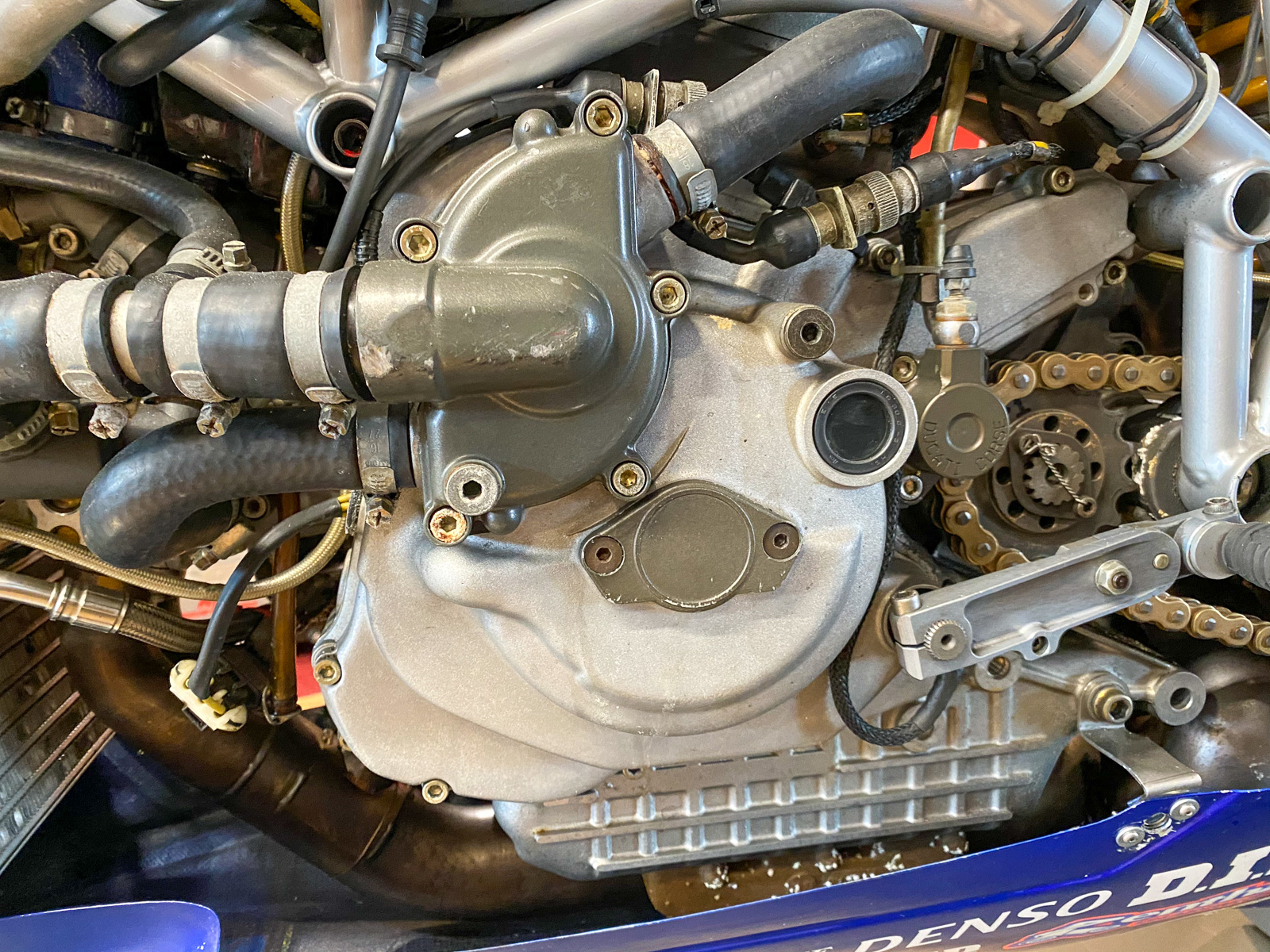 Testing for the article occurred in January of 2001, and the bikes were again updated before the 2001 race season. Changes included:

1.) Silver wheels (previously gold)
2.) Different “number plate” shapes
3.) Red/white/green stripes added to the nose (some bikes also got them on the tail)

4.) Most of the bikes had silver frames, some had black frames with black forks.
5.) John’s bike was #3, teammate Sean Emmett was #5
6.) Tail section and sidepanels switched out to the smoother bodywork of the 998.
7.) Most of the bikes had carbon inlets, some were painted blue.
8.) 57mm exhaust with Promotive cans, as opposed to the 56mm stated in the article. 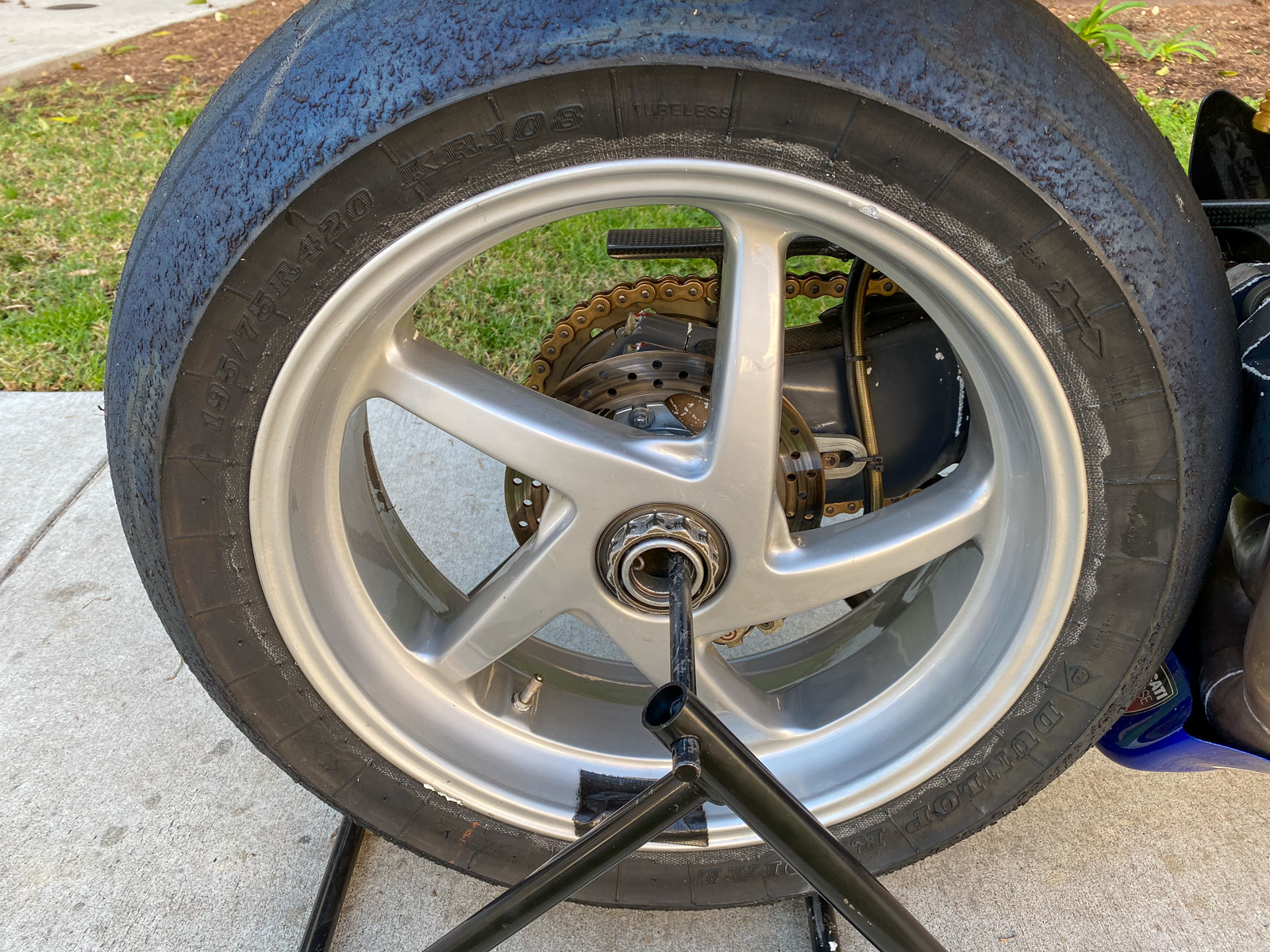 Reve Racing sold this bike to Brad Miller of Motion Ducati in 2001, and he competed with it in CCS domestically alongside a Red Bull-liveried 998RS. This 996RS was Brad’s go-to bike in the 2002 and 2003 seasons. 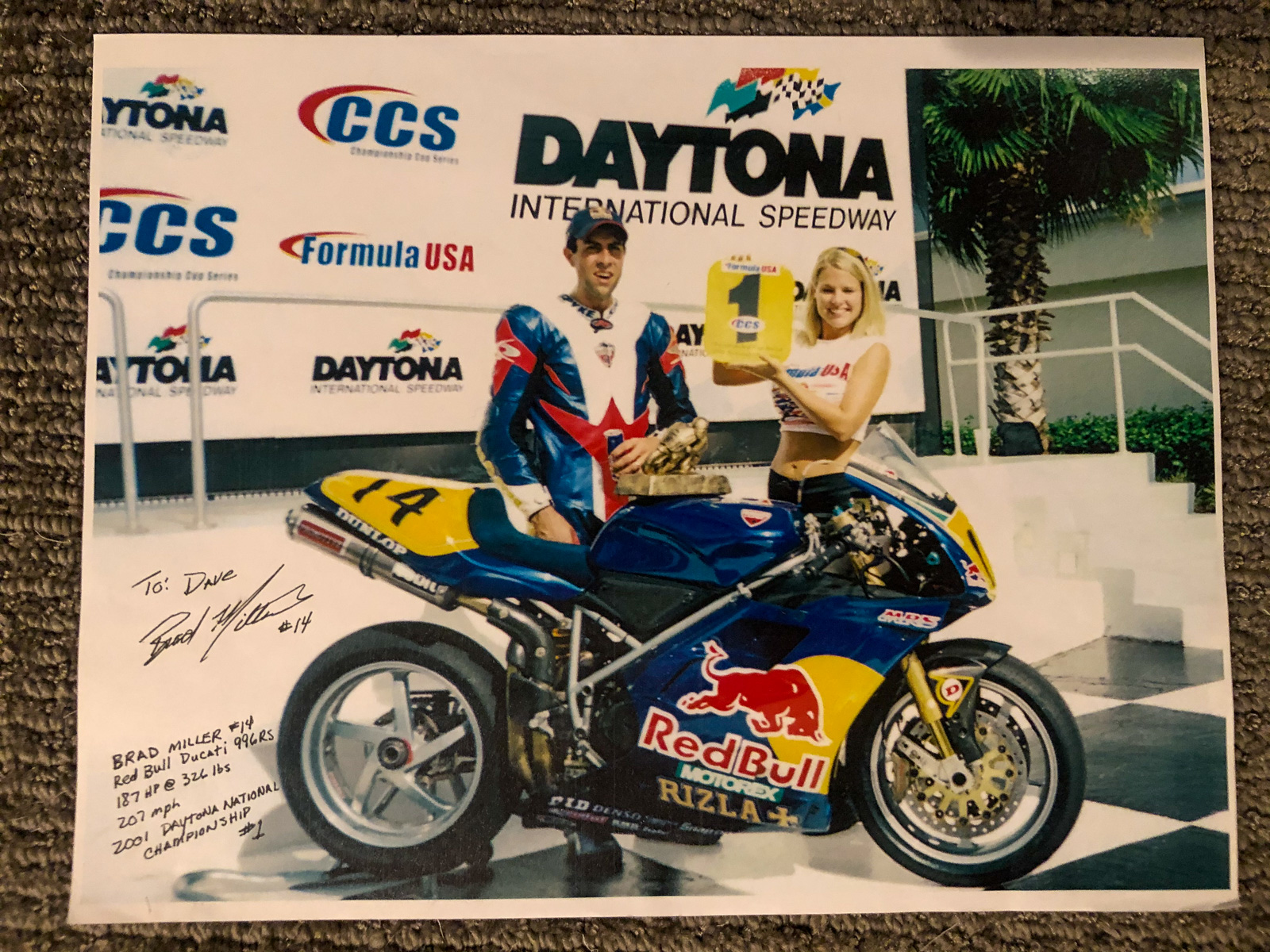 After the 2003 season, Brad sold to this Ducati to the current owner – the same one who has been offering up several zero-mile Italians as of late here on Iconic Motorbike Auctions. The owner crated it and stacked it in his collection. In preparation for this auction, he sent this RS to our Santa Monica location. When we took the bike out of the crate, the front end was completely collapsed from being tied down for quite some time as the inner plastic spring retainers had shattered. We pulled the forks, replaced the retainers, and now it sits as it should.

It is offered as-raced, and we note some pitting on the magnesium as often seen on these machines.

The sale includes a spare original 996RS engine originally built for this bike as well as a bump starter.

Please note that this bike does not have a VIN on the headstock, but we feel confident in the provenance with the supplied documentation and our conversations with Brad Miller. We’re more than happy to get you anything else you need while the bike is here in our possession to answer any questions you may have.