Additional photos of this Suzuki TL1000R are available here for your perusal.

Following the success of Ducati’s V-Twin-powered racers in the World Superbike Championship, other major manufacturers followed suit by developing their own race-bred V-Twins. Suzuki’s first attempt at a performance-driven V-Twin model came in the form of the TL1000S in 1997, though the next year the Japanese marque would follow up the half-faired 1000S with the even racier TL1000R. “The concept behind the TL1000R is simple: Build a V-Twin with the potential to win Superbike races,” explained Hiroshi Moritake, who led the TL-R project.

While the 1000S and 1000R models both shared the same engine, the R-spec was far more than just a full-faired version of its predecessor. The 1000R featured a beefy aluminum twin-spar frame based on the GSX-R750. The frame was complemented by a new braced swingarm, a standard steering damper, and a revised version of the 1000S’s notoriously finicky rotary damper spring unit with new linkages. 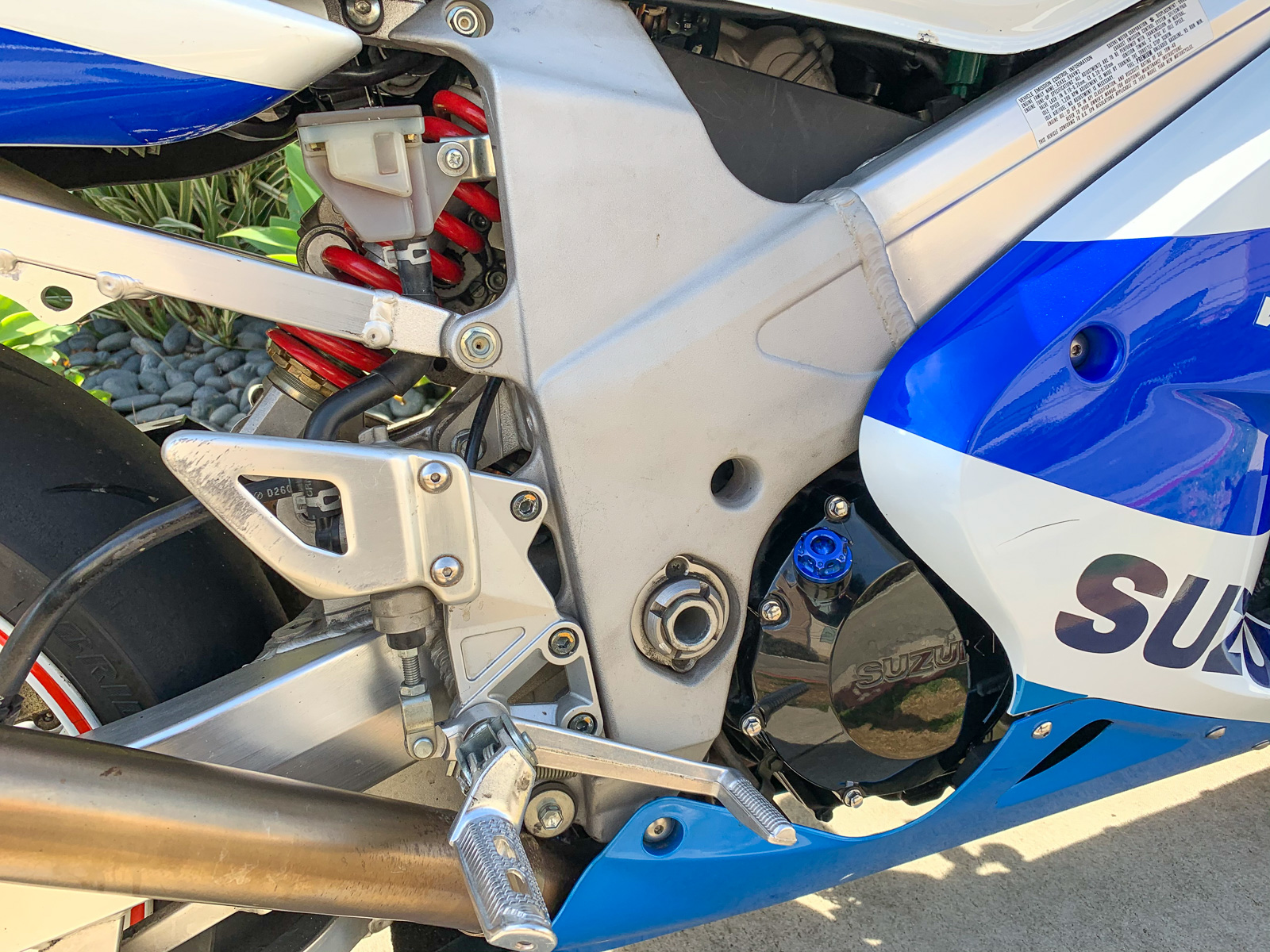 The V-Twin motor was also updated for the TLR, getting a revised ram-air-box, Mikuni electronic dual-injector throttle bodies, upgraded cams, forged pistons, beefier connecting rods, improved ignition timing, and a 1,000 rpm higher redline. The changes to the liquid-cooled, four-stroke, 996cc, 8V, DOHC, 90-degree V-Twin ultimately afforded the TLR a cool 135hp at 9,500 rpm and 78 ft-lbs of torque at 7,500 rpm. And despite the bump in performance, the V-Twin retained its reputation for bullet-proof reliability.

The Gixxer-derived chassis was paired with a set of 43mm inverted forks and a Progressive link shock, both adjustable for spring preload, rebound, and compression damping. Slowing the twin-cylinder superbike was a pair of 320mm front discs bit by six-piston calipers and a single 220mm disc with a dual-piston caliper in the rear — all provided by Tokico. 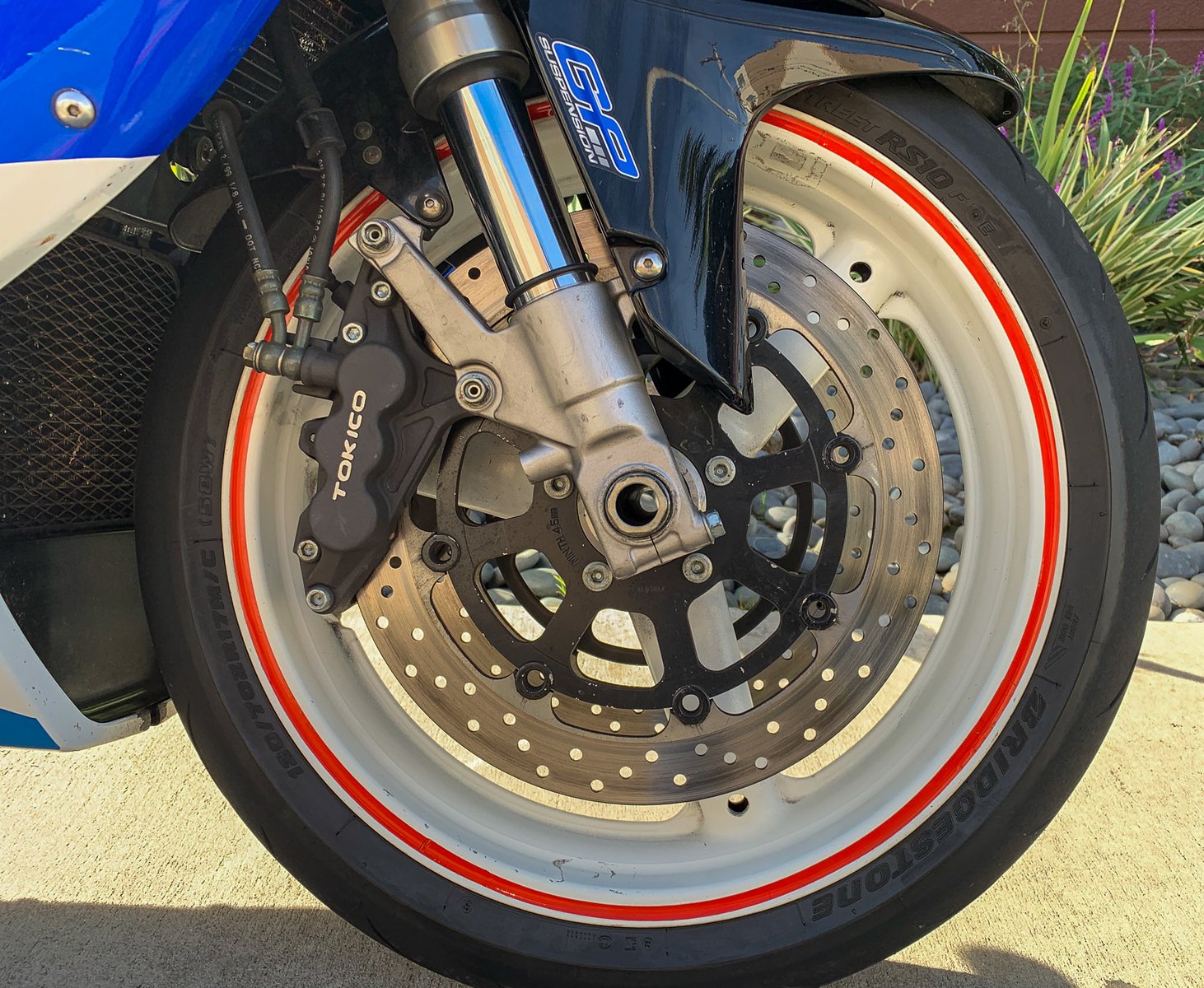 Weighing around 430 lbs dry, the TL1000R sported wind-tunnel-developed bodywork including a distinctive “shark nose” fairing, which helped the 135 hp V-Twin cut through the air and reach speeds of up to 170 mph. Suzuki also offered a myriad of trick factory race kit parts for the TLR, including upgraded internals, and a wide array of chassis adjustability such as swing-arm pivot position, ride height, and steering stem rake.

Despite Suzuki’s ambitious plans for WSBK domination, the TLR would only achieve a single race win before the company opted to revert to its four-cylinder GSX-R platform in WSBK competition. By the close of 2003, Suzuki had phased out the TLR in favor of the new SV1000(S), which still utilized a version of the TLS’s V-Twin platform. While the TLR never shaped up to be the podium-topping WSBK performer that Suzuki had hoped for, it nonetheless proved to be a stellar sport bike for the street, combining a relatively comfortable riding position with sharp cornering, solid wind protection, and a punchy, rock solid, high-revving engine.

It was acquired by the seller approximately 18 months ago from a private party in Cathedral City, California that owned it for a number of years and who had acquired the bike from a dealership in Michigan. The current owner has covered approximately 3,000 of the 19,000 miles on the odometer himself. He’s letting it go as, much like Suzuki’s WSBK team, he’s moved to a new Suzuki GSX-R1000.

The seller claims that all routine maintenance has been performed, and he has documentation for when the service was completed by professionals. There is an extensive list of upgrades:
– Power Commander III (Dyno tuned and custom mapped by Mickey Cohen Motorsports)
– K&N air filter
– complete M4 stainless steel exhaust system with carbon cans

The one mechanical issue to note is a small fuel leak from the left side of the tank. Per the seller, the fuel flange gasket is new, so it may be a loose fuel line.

There are several minor cosmetic flaws that include scuffs on the tail and the steering damper body (both have been touched up), and flaking paint on the wheels. There are also minor scrapes on most body panels and some stains under the battery door in the left fairing. You’ll also find GP Suspension stickers on the front fender. Photos of everything are included in the photo album up top. 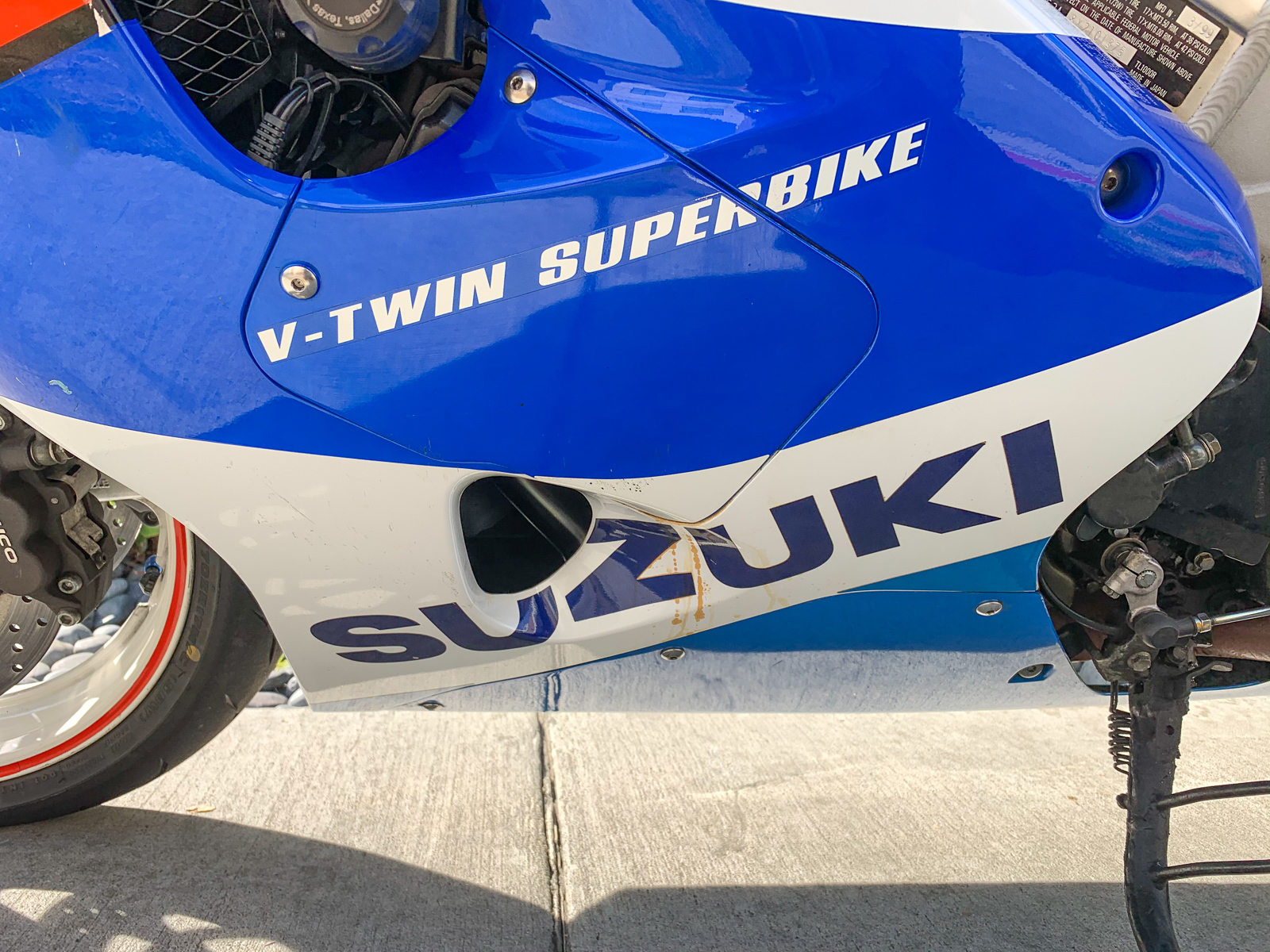 With several tasteful and high quality upgrades, this Suzuki TL1000R presents a strong case for a rider that you can enjoy on the street or track. Please note that since the photos were taken last week, the seller has renewed the tags through January 2021 in California.