Additional photos of this 2000 Bimota SB8R are available here for your perusal. 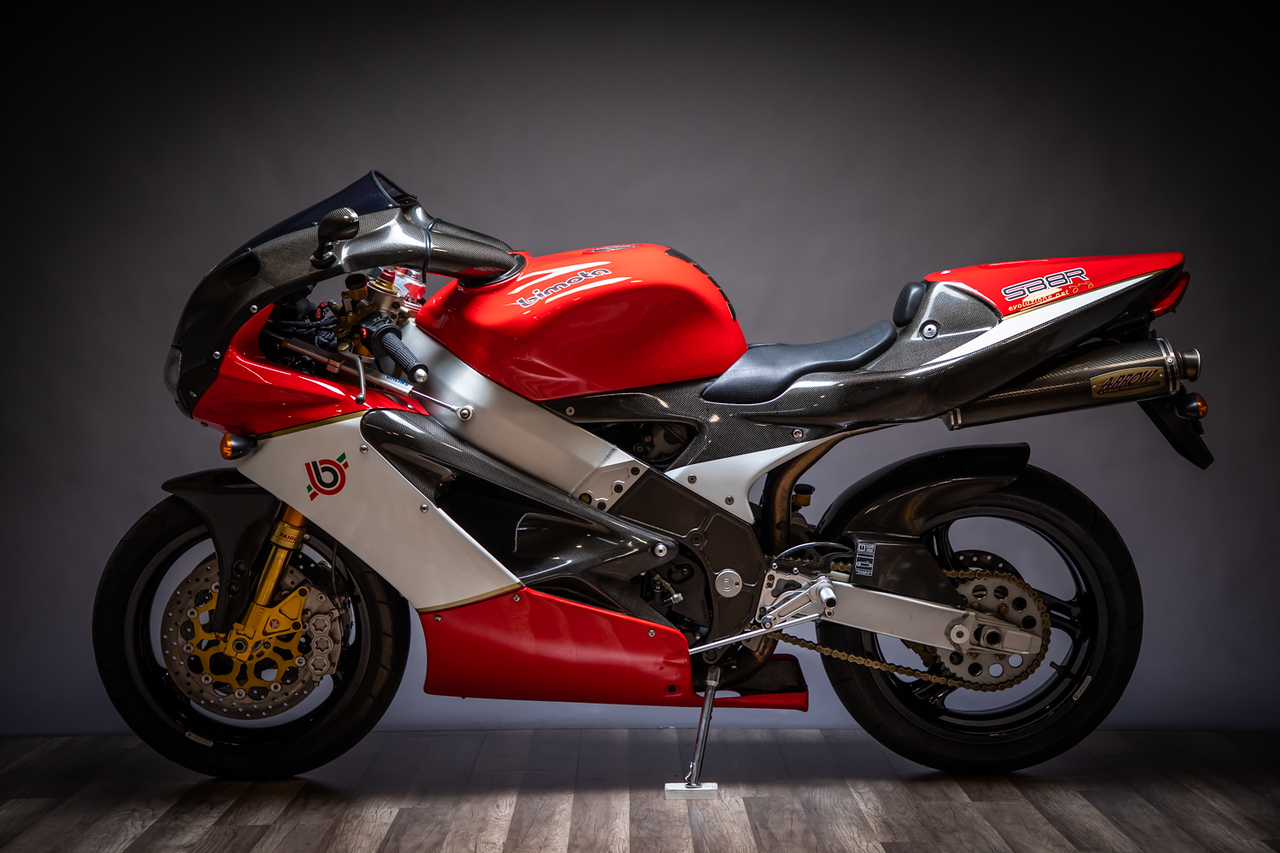 First introduced at EICMA in 1997, the Bimota SB8R was a cutting edge sport bike produced in 1999 and 2000. At the heart of the model was the liquid-cooled, 996cc, four-stroke, DOHC, 8V, 90-degree V-Twin from the Suzuki TL1000R with fuel injection, a wet-sump, and a six-speed transmission. Built by Bimota with the intentions of campaigning the Japanese V-Twin-powered two-wheeler in the 2000 WSBK Championship, the Italian outfit only produced around 150 units in order to satisfy homologation rules.

The SB8R’s crown jewel was its wildly trick chassis; an aluminum twin-spar unit with carbon fiber composite reinforcements (the first production road-bike of its kind). Looking to shave off weight from wherever possible, the engineers in Rimini decided to delete the rear subframe entirely, and instead had the rider perched on a self-supporting full carbon fiber tail section that by itself eliminated four and a half pounds of bulk. The frame also allowed for the rake to be set at either 23 or 24-degrees, thanks to a 916-style reversible steering-head insert.

The sophisticated new frame also enabled Bimota to position the rear suspension underneath the airbox, ridding the bike of the overheating problem the TLR’s rear suspension suffered from. The Bimota’s frame also remedied the Suzuki’s other main issue which was its hefty weight – a feat helped along by excessive use of carbon fiber throughout – resulting in a dry weight of less than 380 lbs dry, more than 40 lbs less than the TL1KR. Additional weight savings came in the form of 17-inch cast-aluminum Antera wheels as well. 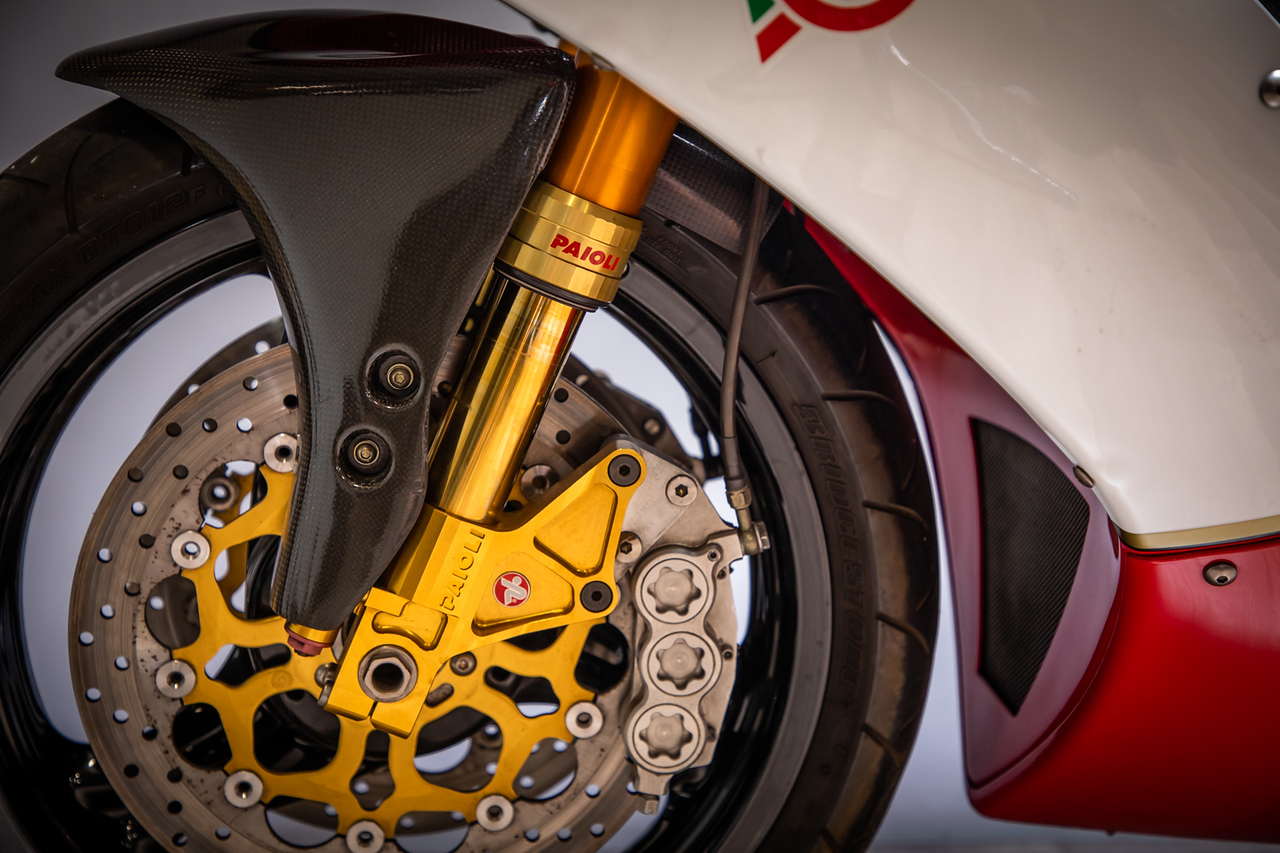 In typical Bimota fashion, the SB8R was loaded with top-shelf componentry. The suspension was comprised of 46mm inverted Paioli forks and an Ohlins rear shock, both of which were adjustable for Preload, rebound, and high/low-speed compression damping. Stopping duties went to dual 320mm discs bit by Brembo four-pot calipers aided by a single disc out back.

Bimota also lightly modified Suzuki’s engine, resulting in the V-Twin putting down 134 hp (at 9,500rpm) and 74 ft-lbs of torque (at 8,500rpm) at the rear wheel — which is roughly what the TLR made at the crank. Tipping the scales at 436.5 lbs at the curb, the SB8R was capable of achieving a top speed of around 170 mph, partially thanks to its slippery, Italian-designed bodywork. Thanks to top-of-the-line suspension and a svelte weight, the SB8R was also extremely nimble on the track. With a wheelbase of only 1,390mm (54.7”), the SB8R was shorter than not only the TL1000R, but also Yamaha’s benchmark-setting YZF-R1.

The boutique manufacturer also sold a factory race kit for the SB8R that featured magnesium triples, an Ergal steering pivot, quick-release wheels, a “potentiometer” that enabled the rider to select from one of eight different power maps, and a competition-spec Arrow exhaust system culminating in carbon fiber cans under the matching carbon tail. This particular 2000 Bimota SB8R example comes out of our private vault of exclusive museum bikes in Marina del Rey, California. With around 7,000 original miles on the clock, this specimen is in fantastic shape both inside and out, and making it even more noteworthy is its low VIN number of 18. 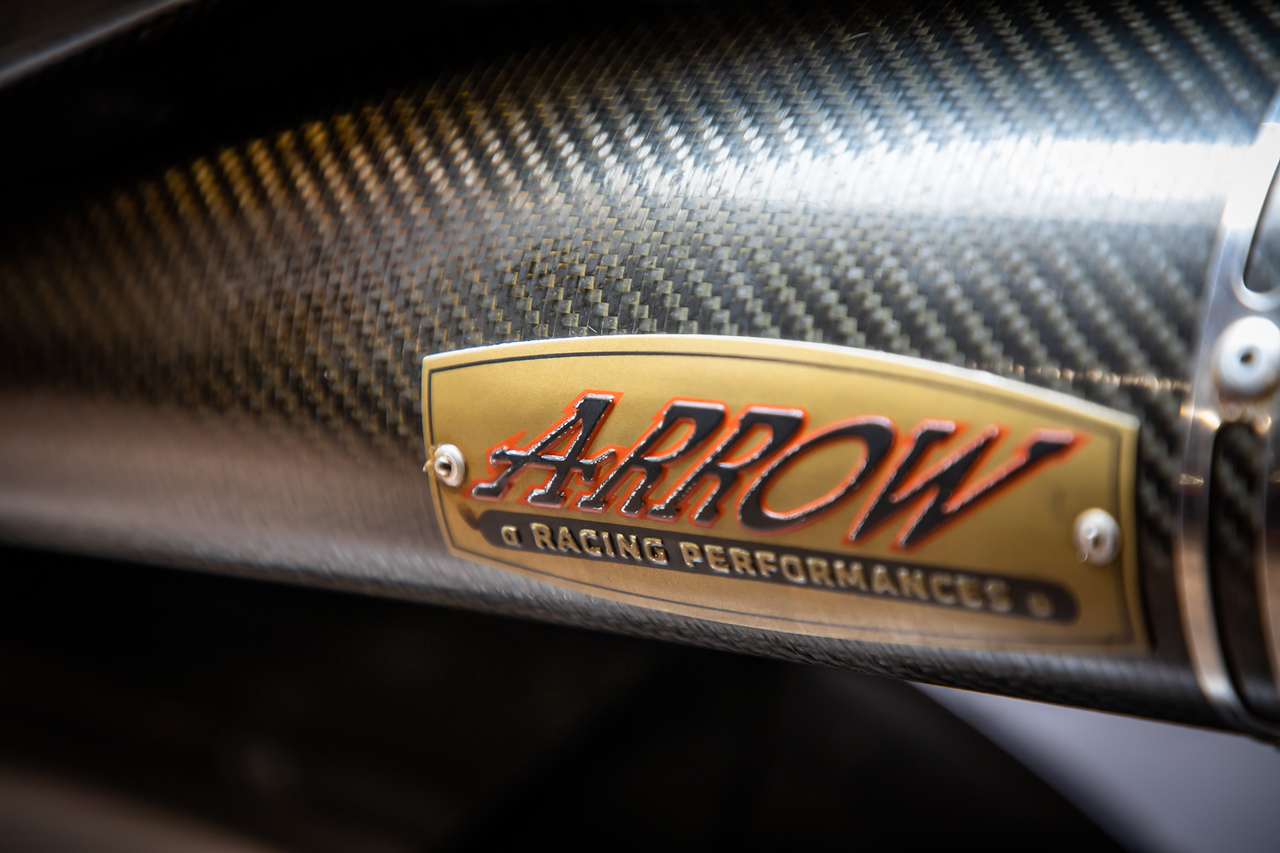 Though its largely stock and still proudly wears its race-inspired factory livery, this example has been fitted with a full Arrow exhaust system — a la the special factory race kit — and high-end six-piston ISR calipers. The stock exhaust is included. The sole issue is a scratch in one of the Bimota fairing logos.

With its wildly trick aluminum and carbon composite frame, stamped alloy swing-arm, and self-supporting carbon tail section, the SB8R wonderfully encapsulates the spirit and essence of the Bimota brand. 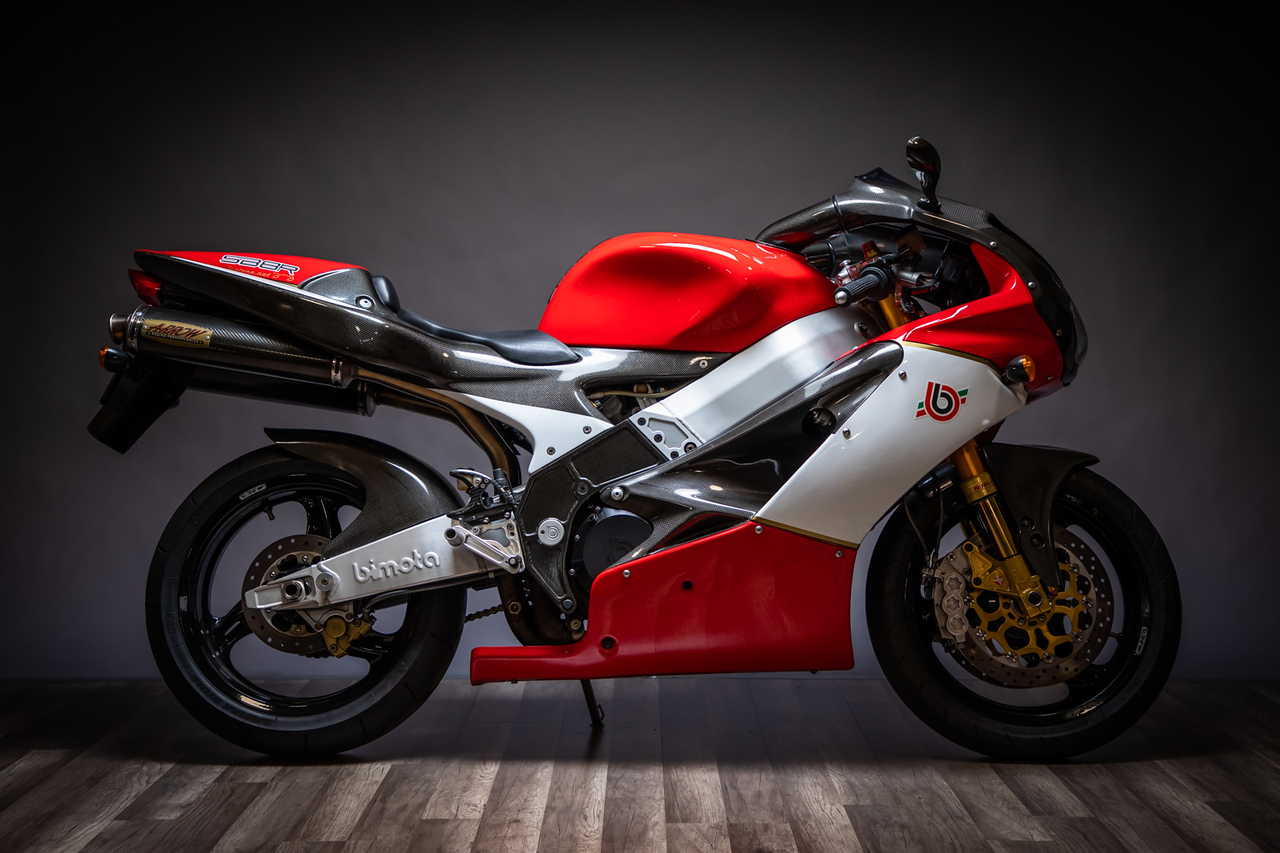