Additional photos of this 2000 Derbi GPR 50R are available here for your perusal.

Derbi’s origins began with a little bicycle workshop in the village of Mollet near Barcelona, founded in 1922 by Simeó Rabasa i Singla. The focus remained the repair and hire of bicycles until May 1944 when Rabasa formed a limited liability company named Bicycletas Rabasa with the aim of moving into manufacturing bicycles. The venture proved very successful and in 1946, supported by its profits, work began on a motorized version. More moped than motorcycle, this first model, the 48cc SRS included plunger rear suspension, and a motorcycle type gas tank and exhaust system. The SRS proved so successful it prompted a change in the company’s direction, and on November 7, 1950, the company changed its name to the Nacional Motor SA. Just prior to this, at that summer’s Barcelona Trade Fair, the company unveiled its first real motorcycle, the Derbi 250. Derbi successfully competed in Grand Prix motorcycle racing, winning 50cc world championships in 1969, 1970 and 1972. When the 50cc class was increased to an 80cc displacement in 1984, Derbi would claim four consecutive world championships between 1986 and 1989.

Which brings us to our listing of a well-preserved one owner 2000 Derbi GPR50R. These were rare but official US imports and are titled as 49cc (scooters in most states) like the foreign versions. However, US spec bikes came straight from the factory with the larger EBE075 motors and can do 70+ mph. These are more like mini sport bikes. Light, simple, yet really trick little pocket-rockets with features you wouldn’t expect as twin-spar steel frame, Showa inverted fork, rising-rate-linked Showa mono shock, front and rear disc brakes with steel-braided lines, full fairing, oil-injection, electric start, and a six-speed transmission. What other 49cc bike looks like it could fit in with big bore Ducatis?

Cosmetically the bike looks pristine with red/white Ducati 916 SPS replica paintwork, custom Cagiva-era 916 style decals, rider’s seat recovered in black genuine leather, passenger pad recovered in red/white vinyl, and Aluminum fairing fasteners used throughout. With additional mods and maintenance that add lasting value such as doppler rear shock with heavier spring, forks rebuilt and re-sprung by Superbike Suspension, billet aluminum peg bushings, new chain/sprockets, Avon Viper Stryke tires, EBC HH pads and fresh fluids all around, and a new Shorai battery. The bike is fun to ride and with the suspension upgrades will handle a full size adult. It is currently optimized for someone in the 200lbs neighborhood. The owner has the receipts for the upgraded top end, as well as the internally upgraded forks. He did the rest of the work himself except the paint.

Imperfections to note, there is a crack in the paint along the seam of the dummy tank. There is also a small nick in the paint on the right side tail-piece, but the owner has spares of both tail sides and they’re already painted. 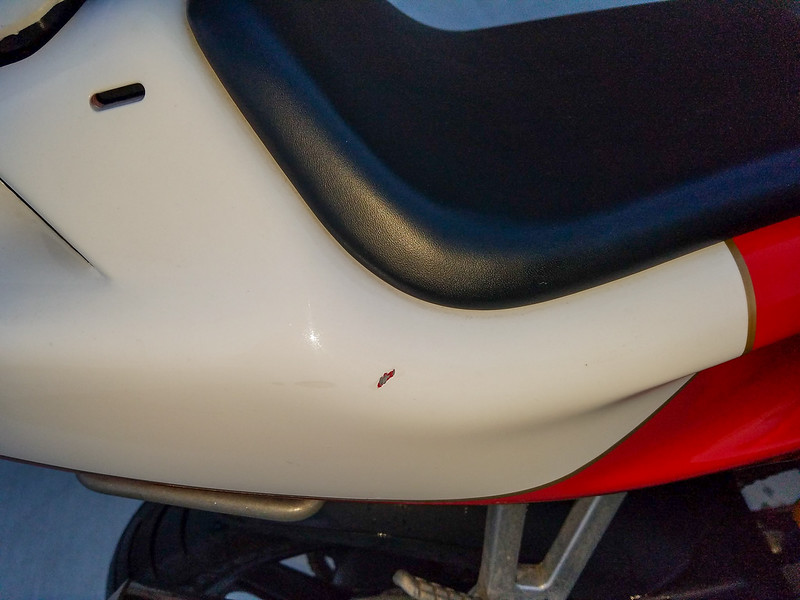 Last time the owner rode the bike this summer, the electric start suddenly stopped working. He suspected the neutral switch has a bad connection but that has not been confirmed. In the meantime, you are able to bump start it by walking, which is incredibly easy on something so small. There’s something undeniably magical about Derbi`s, and this one is sure to put a huge grin on any enthusiast`s face.

As mentioned, I’ve got both the tail pieces. I’ll try to dig through the storage and confirm other bits. I know I have a brand new OEM front fairing. I believe there’s a new OEM brake lever, a new clutch basket, the old oil pump, carb, top end (good), and original shock.

Just remembered I have a pair of mirrors and a front fairing bracket, and I probably have the original exhaust too.

Could we please get a list of the new & used parts that come with the bike? If memory serves me correctly the owner had quite a few extras at one time.
Thanks
Richard

I have all that I listed above except maybe the exhaust. It was too cold in the garage to hunt that down last night. I do have the tail pieces, new OEM front fairing, brake lever, clutch basket, old top end, oil injection pump, carb, shock, mirrors, and fairing bracket.

Thanks for these additional notes; this is quite a list of extras!

Basically saved everything I replaced (except maybe old fork internals), plus some extras I came across.

This is a cool bike! I’ll watch this one, and hope to weigh in too.