Additional photos of this Suzuki TL1000R are available here for your perusal.

Following the success of Ducati’s V-Twin-powered racers in the World Superbike Championship, other major manufacturers followed suit by developing their own race-bred V-Twins. Suzuki’s first attempt at a performance-driven V-Twin model came in the form of the TL1000S in 1997, though the next year the Japanese marque would follow up the half-faired 1000S with the even racier TL1000R. “The concept behind the TL1000R is simple: Build a V-Twin with the potential to win Superbike races,” explained Hiroshi Moritake, who led the TL-R project.

While the 1000S and 1000R models both shared the same engine, the R-spec was far more than just a full-faired version of its predecessor. The 1000R featured a beefy aluminum twin-spar frame based on the GSX-R750. The frame was complemented by a new braced swingarm, a standard steering damper, and a revised version of the 1000S’s notoriously finicky rotary damper spring unit with new linkages.

The V-Twin motor was also updated for the TLR, getting a revised ram-air-box, Mikuni electronic dual-injector throttle bodies, upgraded cams, forged pistons, beefier connecting rods, improved ignition timing, and a 1,000 rpm higher redline. The changes to the liquid-cooled, four-stroke, 996cc, 8V, DOHC, 90-degree V-Twin ultimately afforded the TLR a cool 135hp at 9,500 rpm and 78 ft-lbs of torque at 7,500 rpm. And despite the bump in performance, the V-Twin retained its reputation for bullet-proof reliability. The Gixxer-derived chassis was paired with a set of 43mm inverted forks and a Progressive link shock, both adjustable for spring preload, rebound, and compression damping. Slowing the twin-cylinder superbike was a pair of 320mm front discs bit by six-piston calipers and a single 220mm disc with a dual-piston caliper in the rear — all provided by Tokico.

Weighing around 430 lbs dry, the TL1000R sported wind-tunnel-developed bodywork including a distinctive “shark nose” fairing, which helped the 135 hp V-Twin cut through the air and reach speeds of up to 170 mph. Suzuki also offered a myriad of trick factory race kit parts for the TLR, including upgraded internals, and a wide array of chassis adjustability such as swing-arm pivot position, ride height, and steering stem rake. 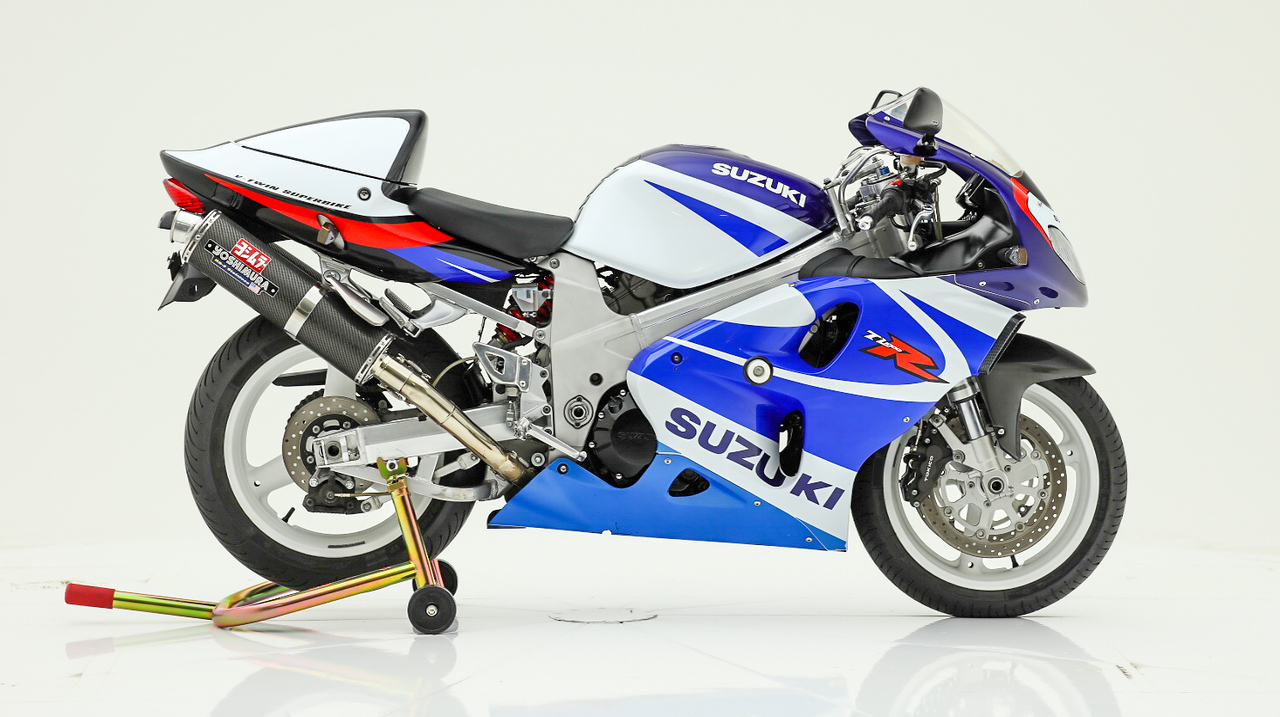 Built in November of 1999, this example is VIN: JS1VT52AXY2101430. It was originally purchased from a dealership in Edmonton, Alberta.

The seller (who is the third owner) acquired it approximately seven years ago from a private party in Sundre, Alberta. During that time he covered approximately 3,500 miles. The odometer shows 14,567 kilometers (9,051 miles).

Modifications:
When the seller first acquired it, he noted that “the previous owner had his own vision of “custom”. I turned it back to stock as much as possible but did leave some of the period correct features on the bike. The carbon fiber look alike signals (which we all thought were awesome in high school) I left – the previous owner tinted those as well as the headlight slightly. Vision at night is still very good so no worries there.” 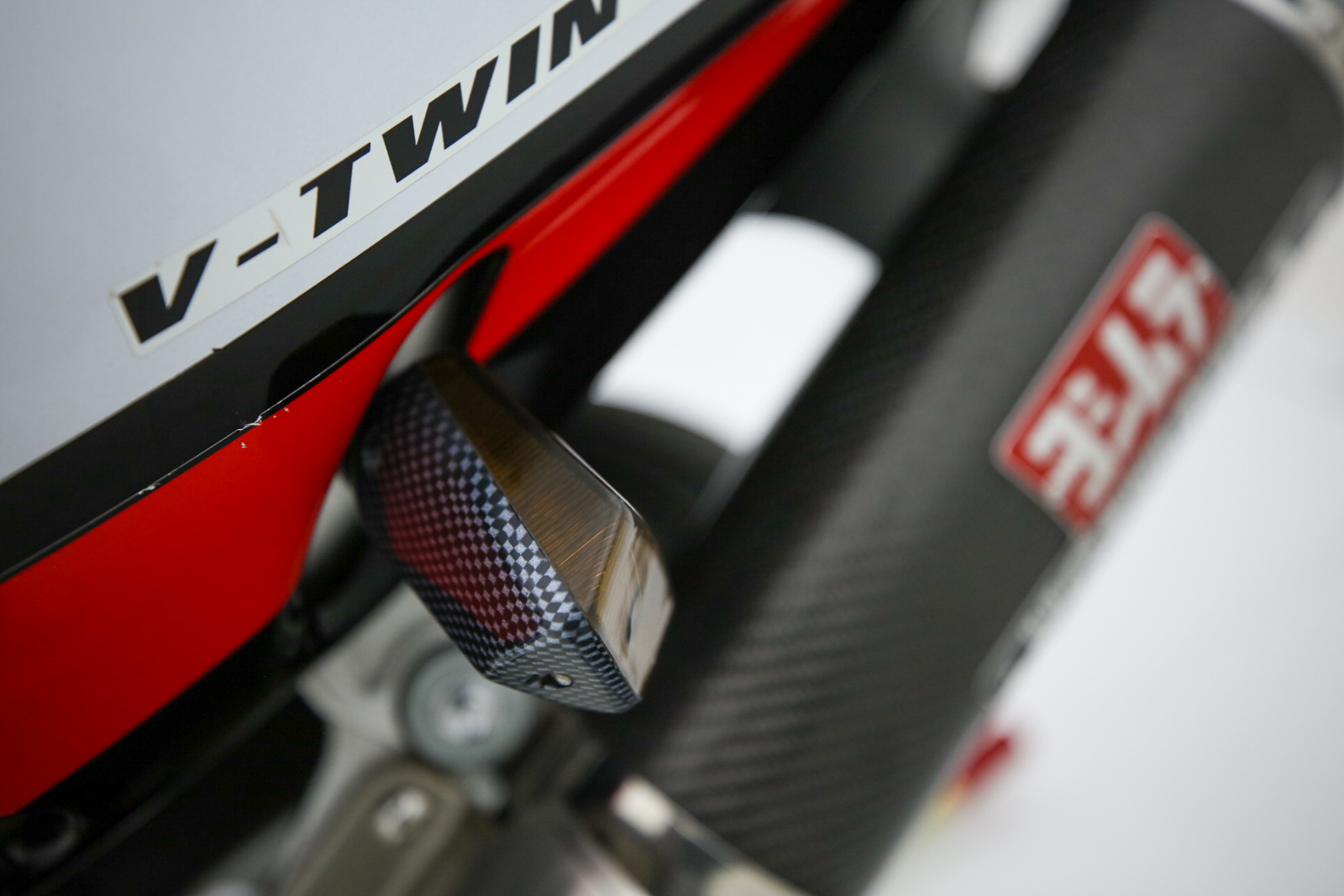 “It has chrome bar end weights and he polished the fairing stay too, which I also left. White frame sliders were also kept.”

“Mechanically, it has a carbon fiber Yoshimura RS-3 full exhaust and a BMC Air filter. The bike came with a Power Commander PC1 installed but it did not run that great and throttle performance was lacking, so I removed it and it was a million times better.”

“I removed the wheels and had them painted egg shell white. At this time also installed new bearings and rubber as it still had original Dunlop 207’s with a DOT date of 2000!”

It is also quipped with a carbon fiber front fender and steel braided brake lines.

“I had to re-order a lot of factory decals and find some parts on eBay to get it where it is today. It does come with a passenger seat and tool kit but no manual. Also the rear fender was cut and clear tail light lens installed so all that had to be replaced as well. I did manage to find a license plate light but did not hook it up as I didn’t require it.” 2/23 Update: The seller has fixed the license plate light. He also just flushed the brake fluid and changed the oil.

“I geared the bike down a bit by going up two teeth in the rear when I replaced the chain and sprockets about 3000km ago and installed a SpeedoHealer v4 to keep the mileage 100% accurate. I did perform the work myself which is why I added some before pictures. I started my career as a Motorcycle Technician before moving to Automotive and working for Lamborghini and Porsche.”

“As far as the flaws with the bike, they are all listed in the pictures. I don’t think it was ever laid down but perhaps a garage mishap. The right mirror has a small scratch in it. The right fairing has a crack in it by the screw mount. There is a very small dent in the right down-pipe of the exhaust and a small scratch on the top left part of the tank. Not sure what happened to the swing arm on the bottom right looks like someone tried to polish out a scratch maybe and the bottom fairing has a crack in it by the header pipe.”

“The bike is really fun to ride and sounds amazing! Hopefully the next owner will enjoy it as much as I do.” 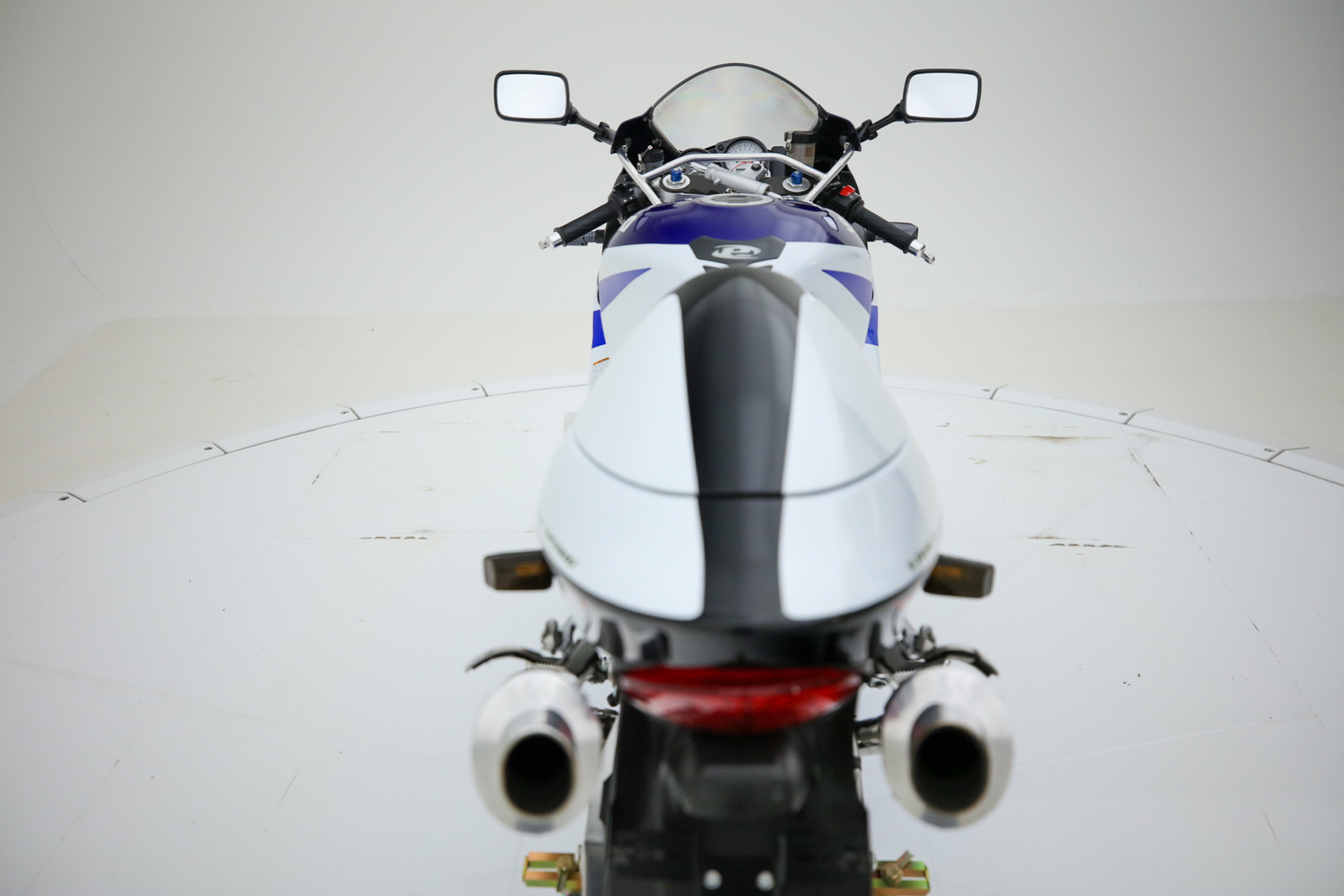 Currently located in Calgary, Alberta, this TL-R is offered on a clean Alberta title. Have any TL-R stories or questions about this listing? let us know in the comments below!

After the auction ended, the seller accepted an offer of $5,350 including buyer fees.