Additional photos of this 2001 Honda CBR929RR Erion Racing are available here for your perusal. Please let us know if you require any additional images!

In 1992, Honda raised the bar in the sport bike sector when it debuted the lightweight and powerful CBR900RR. Designed by Tadao Baba, the 900 was designed to offer the power of an open-class superbike in a svelte 600-sized package. The 893cc in-line four made 124 hp, 65 ft-lbs of torque, and offered a top-speed of 160 mph, all while tipping the scales at around 450 lbs wet.

The RR set a new benchmark in the industry, and Honda enjoyed its years on top with the 900. But everything changed in 1998 when Yamaha released the first R1. Seemingly overnight, the tuning fork company had not only caught up with Big Red, but leap-frogged the firm. The R1 was the new king and the RR was old news. Honda once again enlisted the help of Tadao, who began working on an answer to Yamaha’s liter-sized superbike, and in 2000 unveiled the successor to the 900RR with the CBR929RR. According to Baba, the 929 was actually slated for release in 2002, but after the launch of the R1, Honda fast-tracked the model and managed to debut it a full two years earlier than initially scheduled.

Far from a warmed-over, slightly bored-out version of its predecessor, the 929 was an all-new model. In fact, the only pieces that were interchangeable from the outgoing model were the countershaft sprocket and clutch plates – everything else was completely novel. At the heart of the 929 was an all-new over square engine that made some major advancements over the first Fireblade. Thanks to a cleverly-designed high-flowing cylinder head and a bevy of trick lightweight internals, the 929 produced significantly more power than the 900 at higher RPM. The 929 also featured Honda’s PGM-FI (Programmable digital electronic fuel injection) and 40mm Keihin throttle bodies — with one injector per cylinder — developed with Honda specifically for the 929.

The package also included the firm’s HTEV (Honda Titanium Exhaust Valves), as well as a flapper valve in the airbox to bolster mid-range power. The liquid-cooled, four-stroke, DOHC, 929cc, four-cylinder engine put down 152 hp at 10,750 rpm and 76.1 ft-lbs of torque at 9,000 rpm — a major jump over the first double-R. Admittedly, the Honda was a little down on power compared to the Yamaha, however, the RR more than made up for it in the corners. 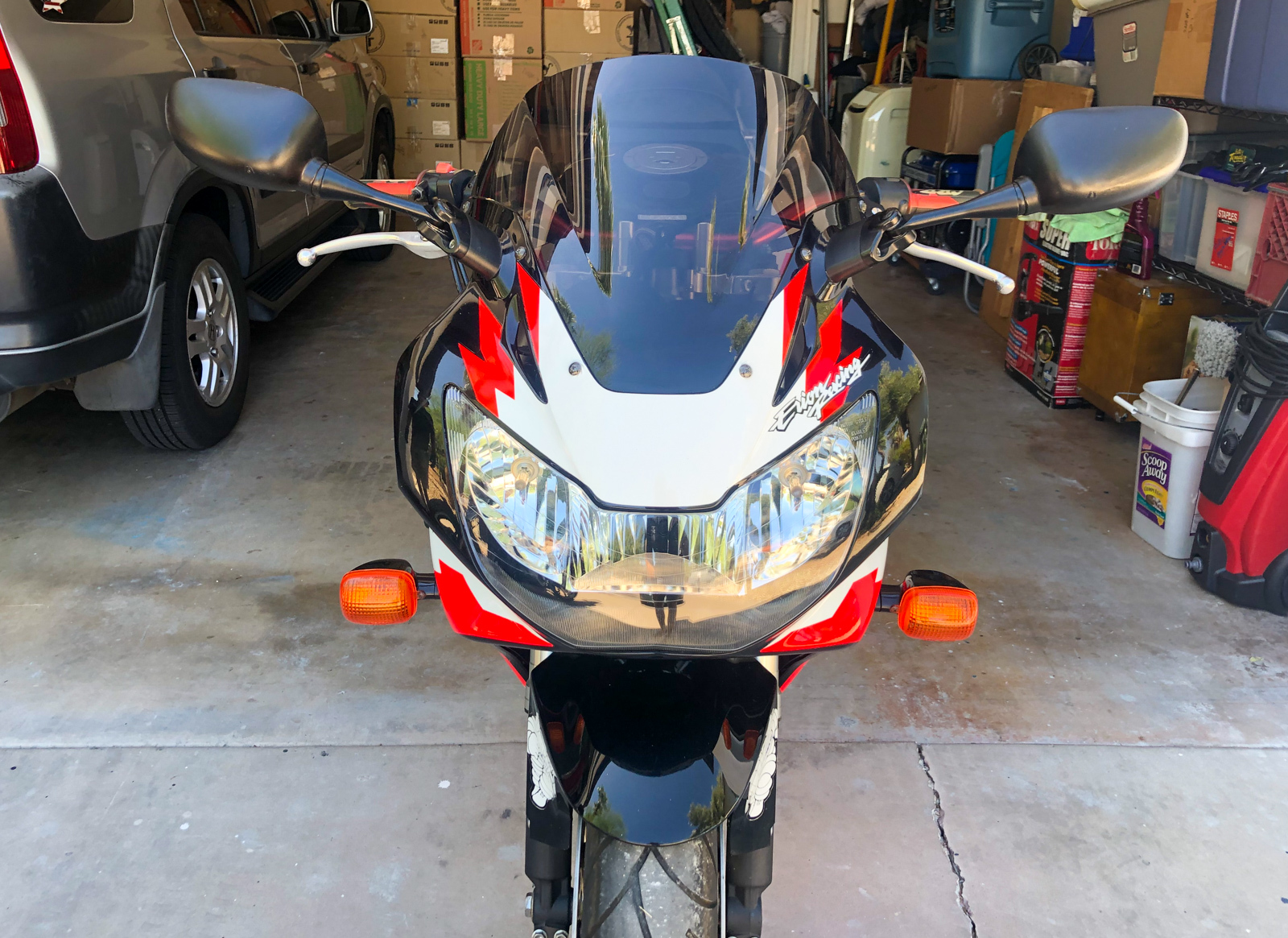 The 929 offered excellent handling, largely thanks to its new “pivot-less” frame design. Gone was the old perimeter structure, and in its place was a twin-spar aluminum unit which utilized the powertrain as a stressed member and mounting point for the swingarm and backbone. Because the swingarm pivot was positioned in the engine case, the swingarm – which like the frame was both lighter and more rigid than the outgoing model’s — was able to be stretched by 20mm even though the wheelbase was 5mm shorter.

While the original 900RR featured a front end designed to look like an inverted unit, the 929 featured an actual pair of upside-down forks; a 43mm HMAS (Honda Multi-Action System) set that was fully adjustable, just like the piggyback-reservoir-equipped monoshock. Stopping power came from dual 330mm discs pinched by four-pot Nissin calipers, and as Sport Rider put it, they “refuse to fade”. Another major change on the 929 was its 17-inch front-wheel.

Though it was only produced for two years prior to being replaced by the CBR954RR, the 929 did receive a few minor updates such as a revised ECU for 2001. That same year, Big Red also introduced several new liveries for the 929, including a limited edition Erion Racing version to celebrate the team’s ample competition success. Founded by AMA National titleholder and former racer, Kevin Erion, Erion Racing is an American race team with a whopping 14 AMA National Championships under its belt. The team utilizes Hondas and managed to win four consecutive titles in the Formula Xtreme series from 1997 through 2000 (and then again in 2006 and 2007). Erion also lays claim to two SuperTeams championships, multiple AMA 600 supersport titles, amongst many other impressive feats, such as a perfect season in 1999 in Formula Xtreme, winning all nine of the year’s races.

With Dan Kyle of Kyle Racing fame (also former Two Brothers Racing crew chief and two-time AMA Tuner of the Year recipient) serving as Erion’s lead mechanic, the team become a major force to be reckoned with. Erion loved Honda’s bikes, and Honda loved seeing Erion win race after race on their machines. “When you are fortunate enough to align yourself with a company such as Honda you can count on the quality and performance of the machines,” stated Erion. “It’s our job to get the most out of the support we receive, and that takes a concerted effort by everyone on our team.”

This CBR929RR (VIN: JH2SC44461M100190) is located in Phoenix, Arizona, and it’s been lightly modified with an aftermarket triple clamp holding ABM handlebars, stainless steel braided brake lines for the front brake, and a Micron exhaust. All the original parts are included in the sale.

All of the original pre-liter-sized CBR RR models have become increasingly sought after, slowly but surely obtaining collectors status. Of all the 929 bikes, the Erion Editon is undeniably the one you want, harkening back to a golden age of American superbike competition. Whether it’s the next addition to your stable, a race-themed display piece, or a regular rider, you really can’t go wrong with this one.