Additional photos for this Furia are available here for your perusal. Please let us know if you require any additional photographs! 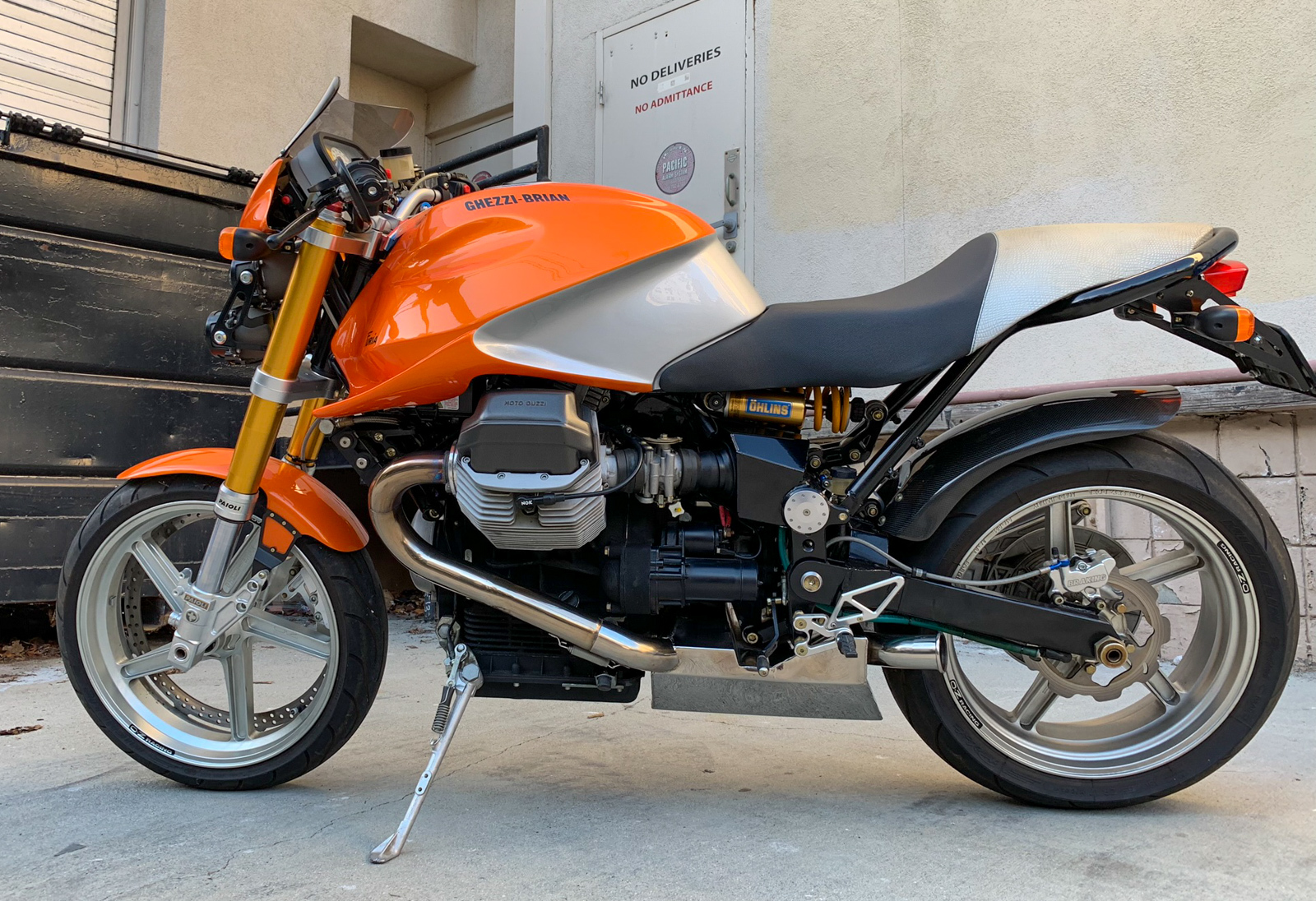 Founded in 1995 by Giuseppe Ghezzi and Bruno “Brian” Saturno, Ghezzi-Brian is a boutique Italian outfit that produces high-performance Moto Guzzi-based models using a wealth of knowledge gained from racing the longitudinally-mounted V-Twins. G-B is not unlike an Italian Buell, only sexier, more exotic, and manufactured in minute numbers.

G-B developed a hopped-up Guzzi-based racer that won the 1996 Italian SuperTwin Championship. That machine ultimately became the basis of the small firm’s debut model, the SuperTwin 1100 (or ST1100). The bike was powered by the V11’s air-cooled, 1,064cc V-Twin, though it featured a balanced flywheel, five-speed gearbox, and a bespoke full exhaust system that helped it to make a cool 94hp at 8,250rpm.

What really made the SuperTwin shine, however, was its highly-developed chassis. The steel single-beam chassis utilized the engine as a stressed member and internally housed the air-box. G-B also penned and fashioned its own mono-shocked swing-arm for the machine, and a clever design and linkage allowed for a surprisingly short wheelbase at just 55.3” — less than that of an R1 of the same era.

After the success of the SuperTwin, G-B decided to release a stripped-down naked version of the exclusive Italian exotic. Dubbed the “Furia” (Italian for “Fury”), the street-fighter featured the same powertrain and chassis as its predecessor, though was even lighter and more fleet-footed. The Furia got a set of upside-down 41mm Paioli forks slotted in custom triples, an Ohlins shock, and a set of forged aluminum alloy OZ wheels — the front of which holds a massive, Buell-style, rim-mounted 420mm disc pinched by a four-piston caliper from Italian outfit, Braking. 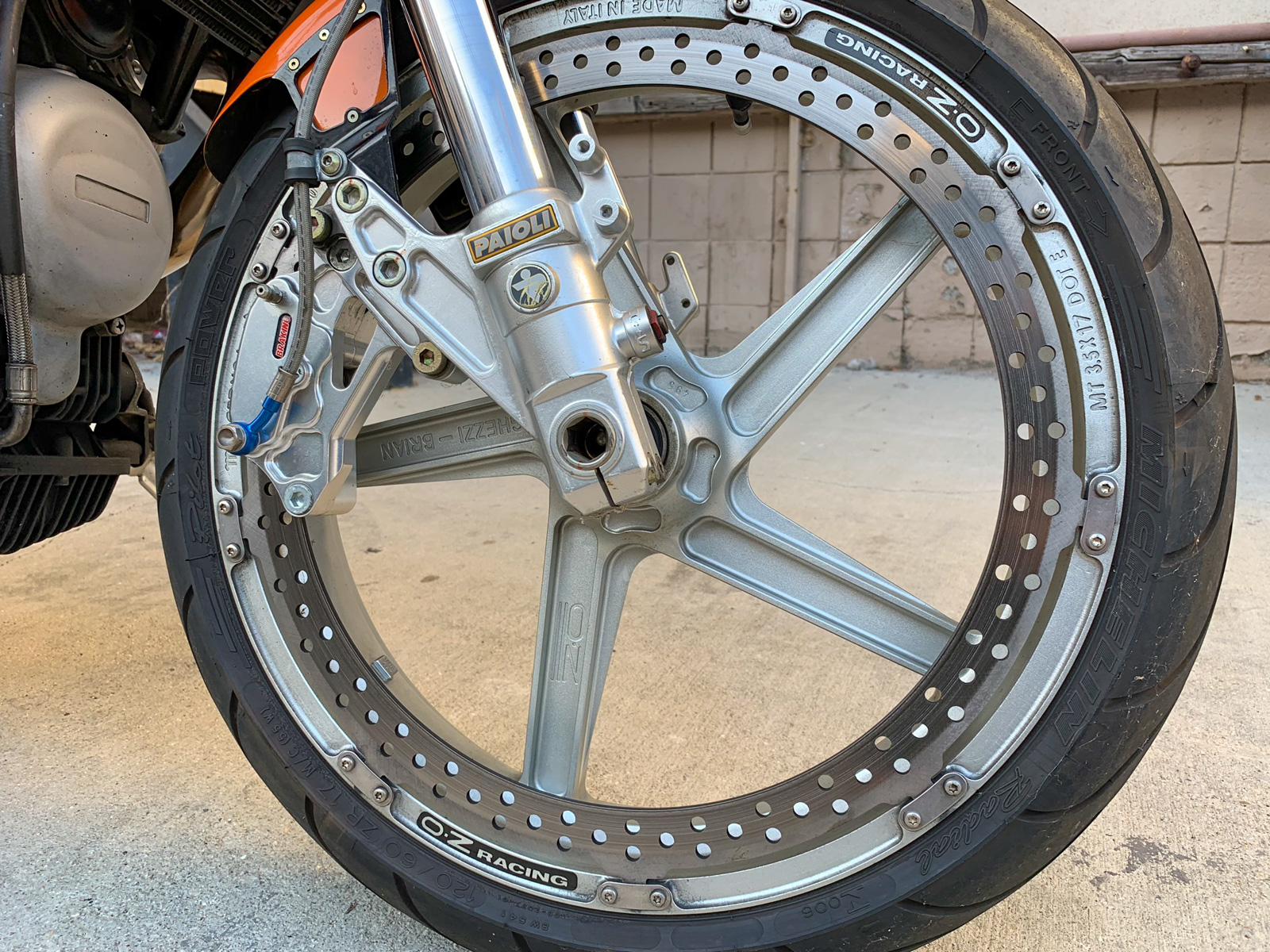 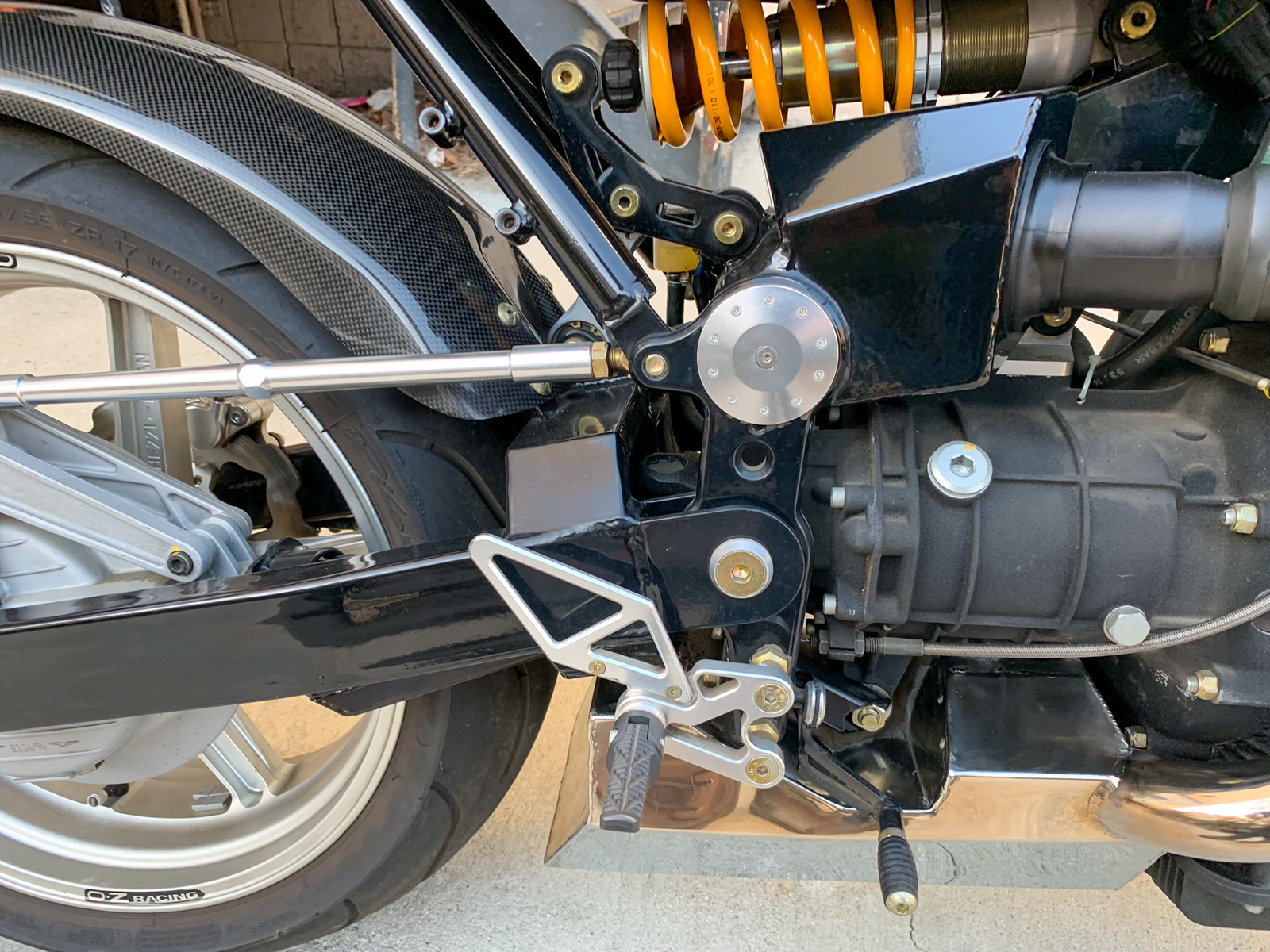 The Furia’s light weight, compounded by the capable chassis and 59.3 ft-lbs of torque (at 3,500 rpm) made it an incredibly agile yet powerful bike (not just “for
a Guzzi”). Its impressive power-to-weight-ratio also afforded the thing a top speed of 135 mph. At the height of production, G-B was only building a few units every month, making Furia’s very rare finds, especially on US shores.

This particular 2002 Ghezzi-Brian Furia (VIN: ZA9STW000P2G51013) was originally imported to Texas from its native Italy. The bike has been well cared for and with just 4,847 kilometers (3,011 miles) on the clock, this elite two-wheeler remains in great condition both inside and out. The current seller — who acquired the bike in 2005 — is offering the Furia with extra mirrors, fender, windscreen, and a nearly-impossible-to-find additional set of painted blue bodywork. 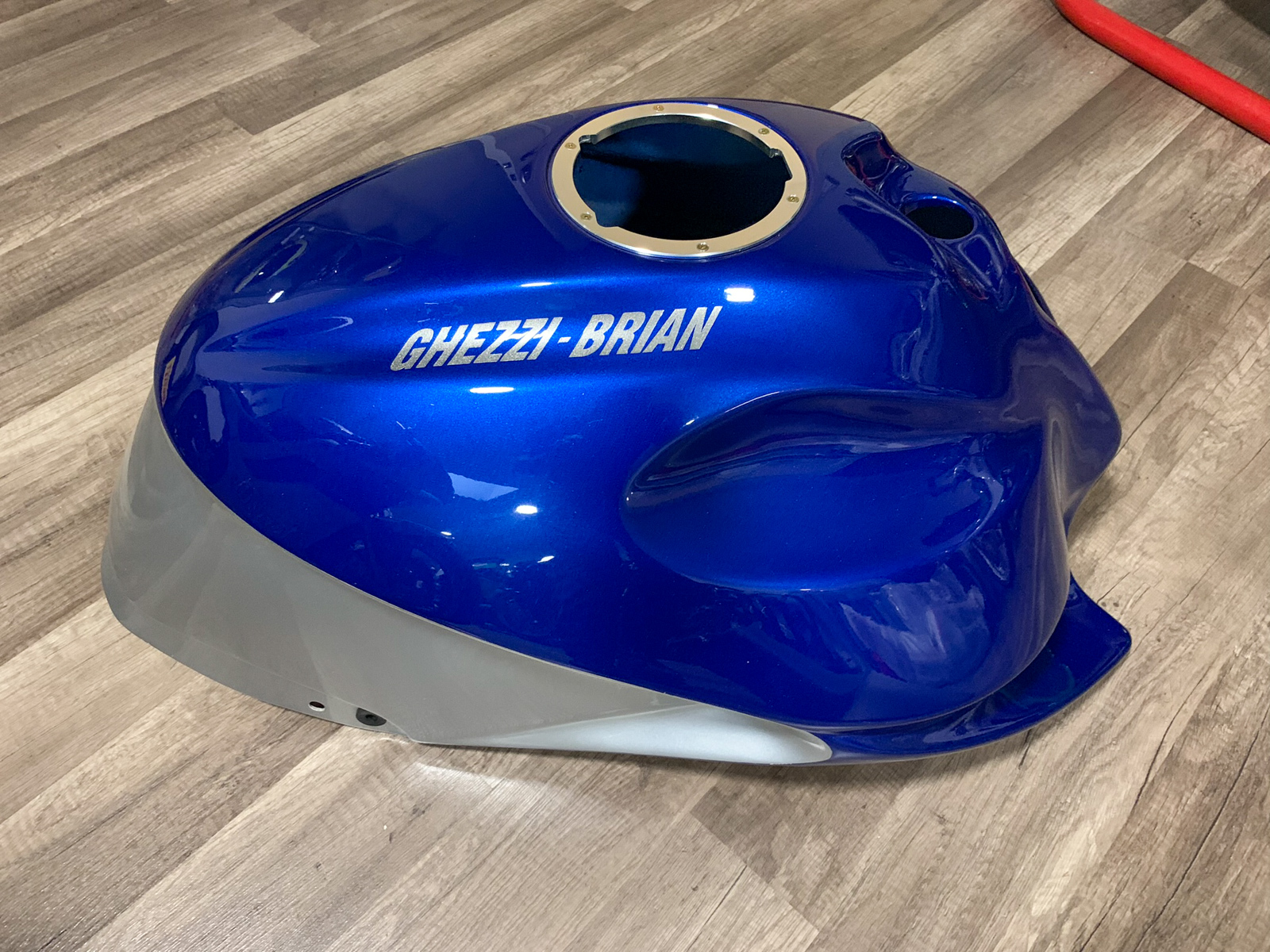 The Furia is more than just another motorcycle, it’s the epitome of rolling exotica, the embodiment of pushing the envelope, the result of scrutinizing over every gram of weight, and the passion project of a pair of world-class experts made available to an elite and lucky few. While most people don’t think of Moto Guzzis as being high-performance, flickable track weapons and canyon carvers, most people haven’t heard the name Ghezzi-Brian. 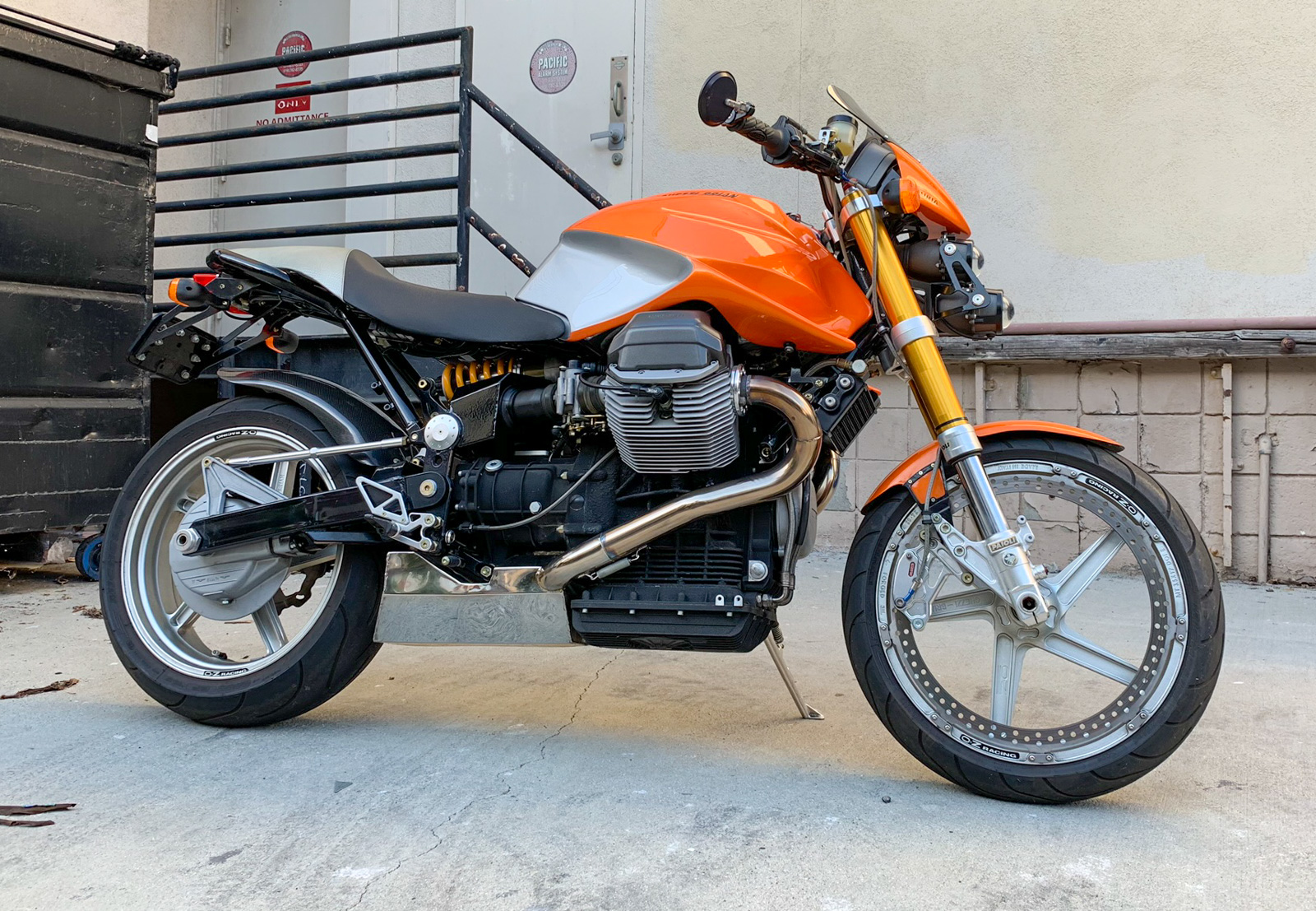