Additional photos of this Graves Yamaha R7/R1 are available here for your perusal. 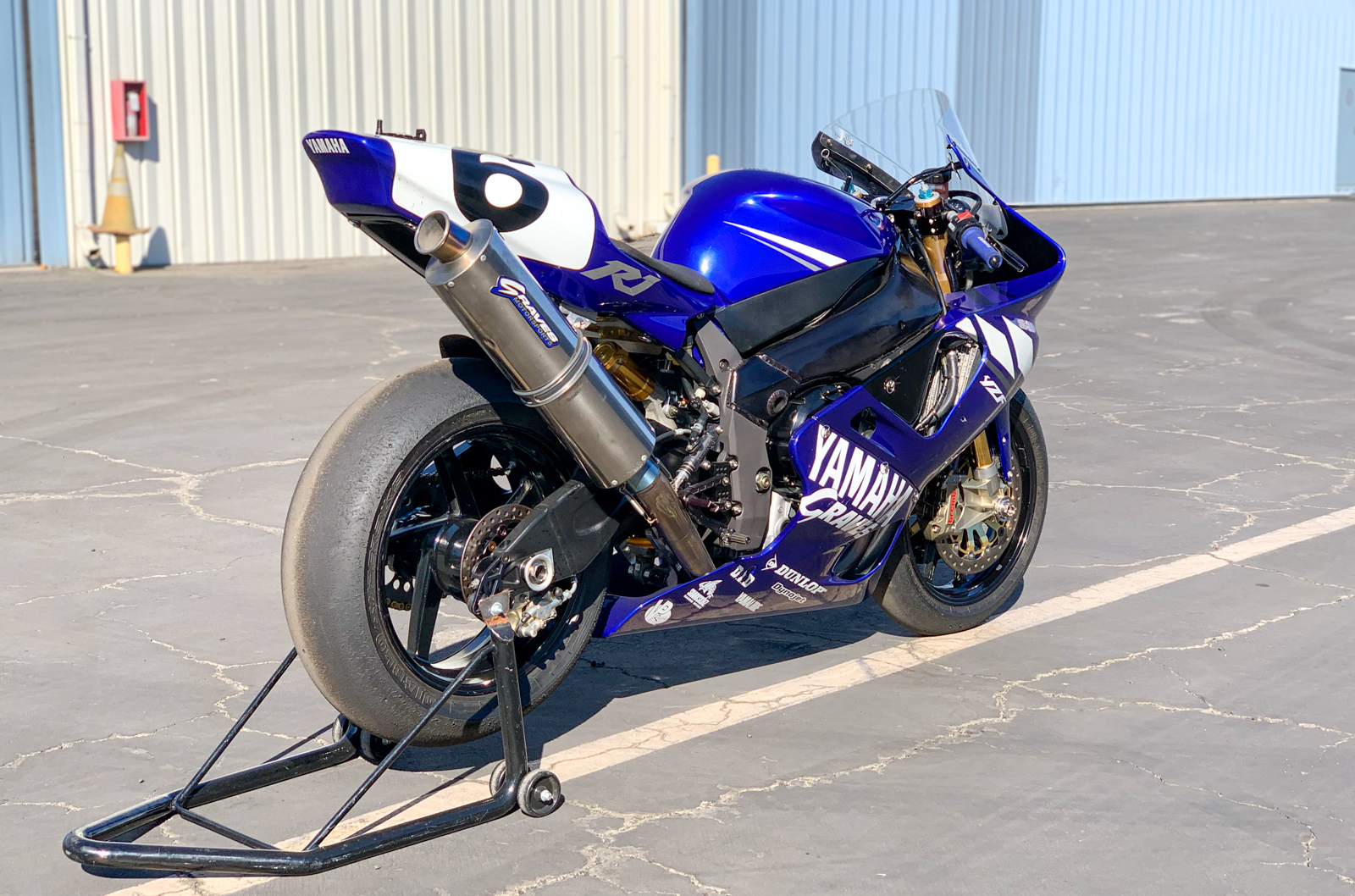 We try hard to provide our own detailed listings here at Iconic Motorbike Auctions, but every once in a while a seller tells the story better than we ever could. This is one of those times, so we’re going to leave the description to the previous owner – our buddy Pete B in Connecticut: 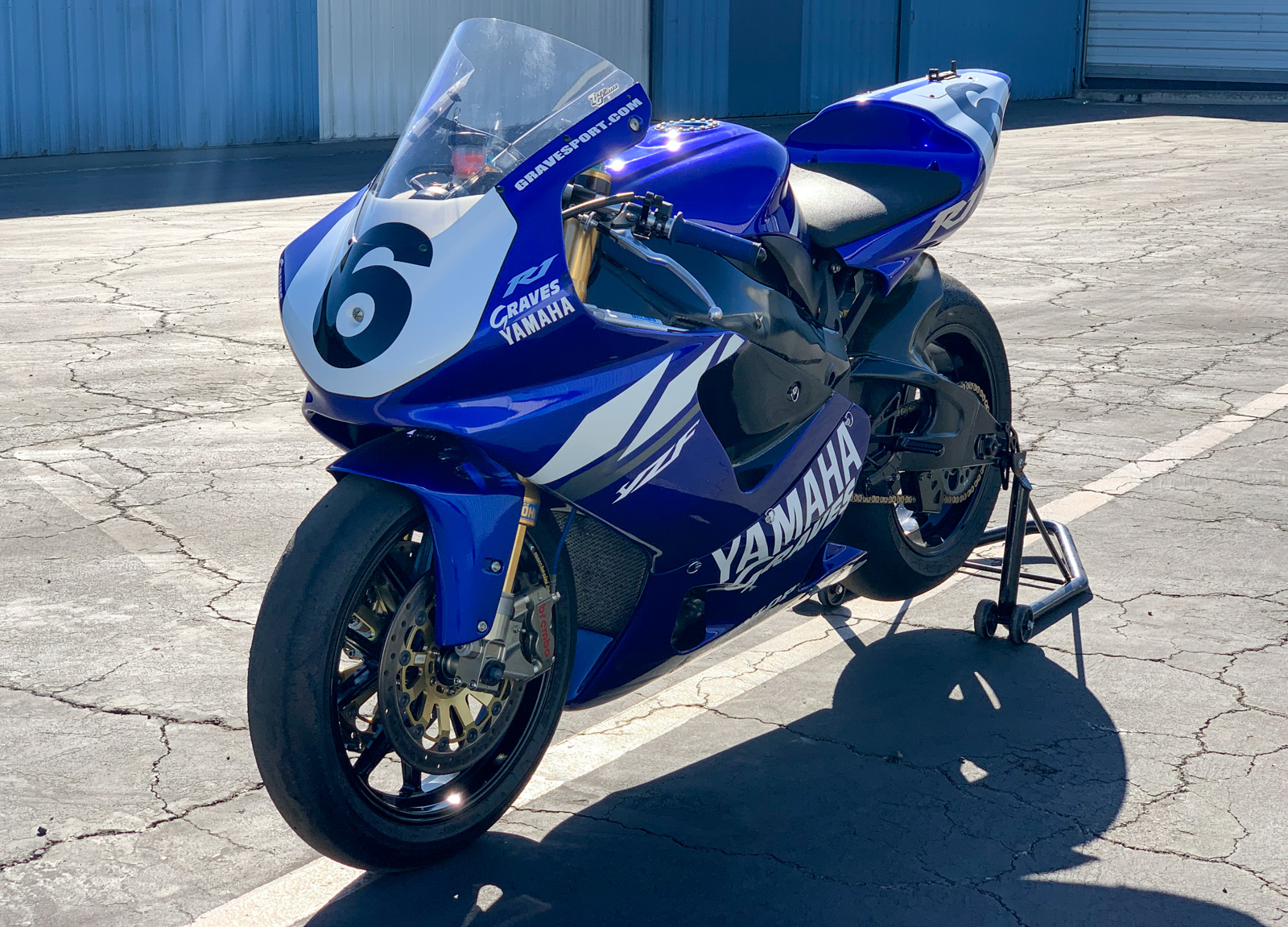 Sometimes cheating isn’t really cheating. In early 2002, Chuck Graves (with the full support of Factory Yamaha) decided that the new AMA Formula Extreme Championship would be a nice addition to the trophy shelf. Yamaha supplied Graves Motorsports with one of its beautiful jewel like R7’s that it had hanging around the race shop. The power mad series of Formula Extreme allowed you to basically run any bike you wanted as long as it was homologated for use in the United States. The general rule stated that you had to start off with a street bike…and you could then modify it as much as you wanted! However, the underlying rule required that at least 50% of the original model’s frame must be intact…so crafty Chuck Graves and his merry crew of mad scientists went about creating the R7/1. 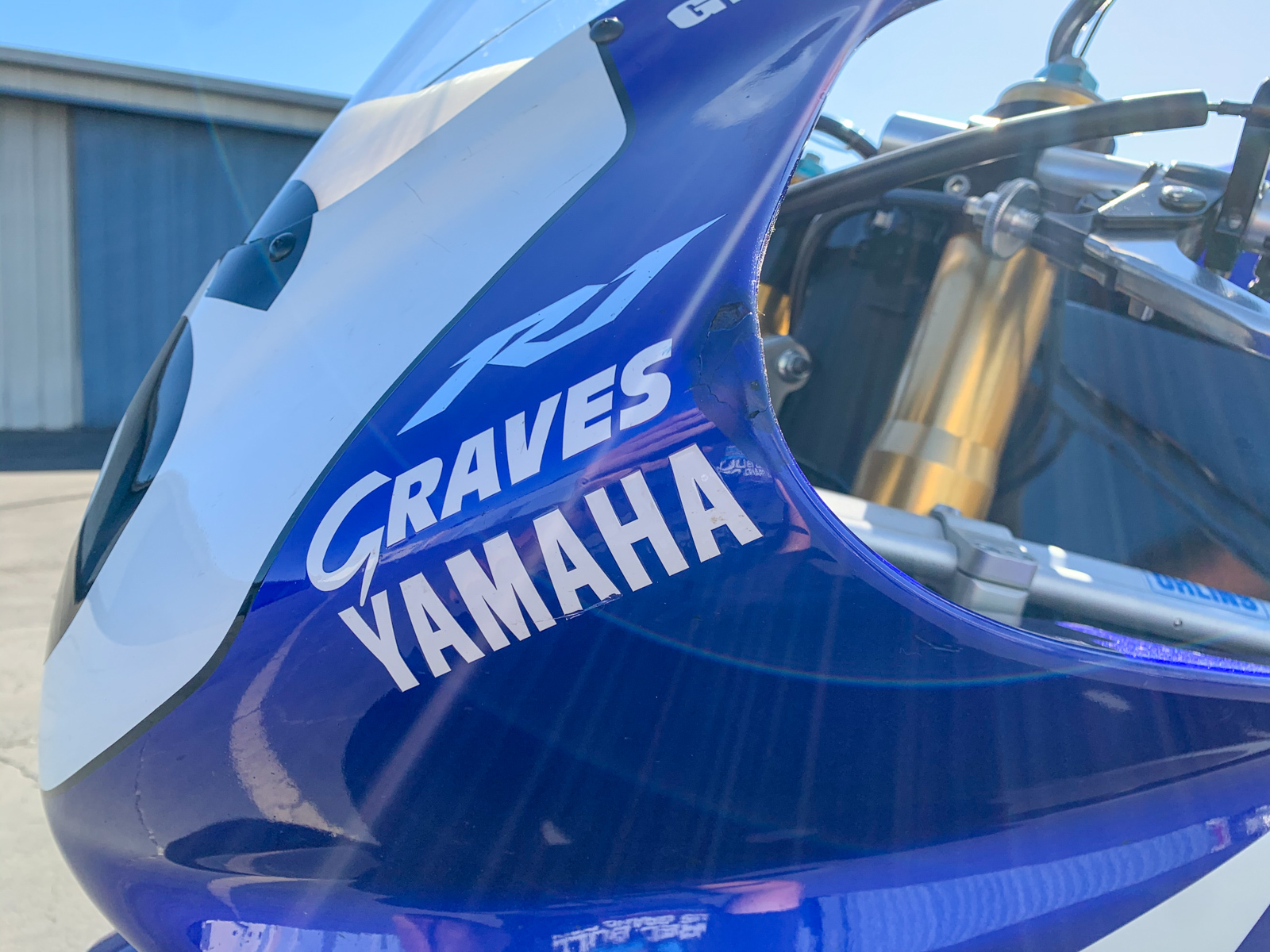 This bike was the marriage of the sweet handling superbike package of the R7 OW-02 and a monster 195 rwhp 1,078cc R1 power plant. The result was the finest handling, fastest FX bike on the grid. Graves rider Damon Buckmaster started the season by absolutely smoking the competition, winning the first race at California Speedway by an absurd 19.6 seconds. Proving it was no fluke, Buckmaster won the next two rounds at Sears Point and Road Atlanta, opening up a healthy 23-point lead over second place. The top teams decided to protest the Graves creation because the R7 was never homologated for use in the USA. Being a limited production factory special, it was only produced in 1999-2000 for a total of 500 units worldwide. Chuck and crew found themselves in a tough spot. 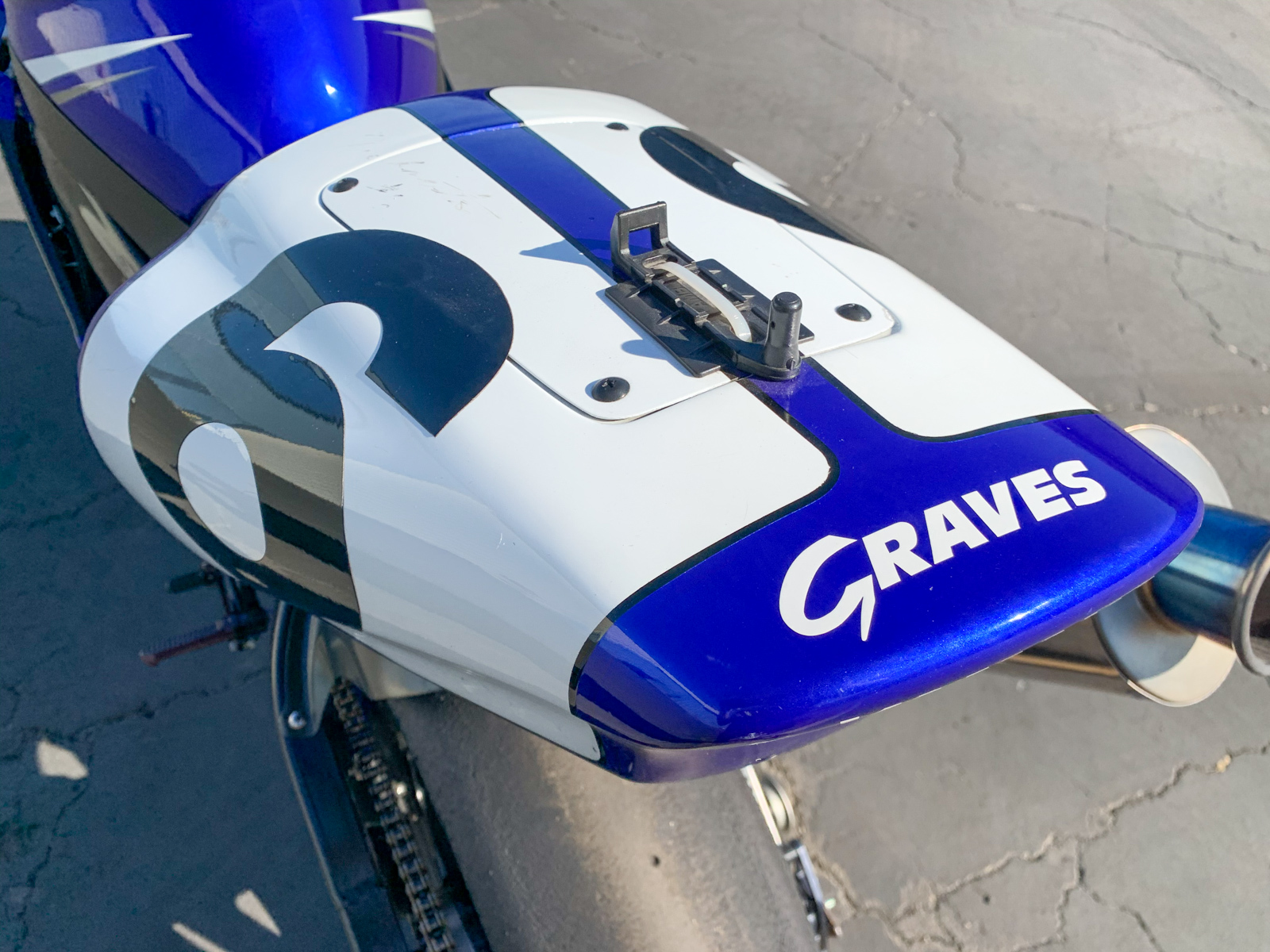 After the protest, the AMA decided that the R7/1 was not in the spirit of the rules. They allowed the team to keep the points they had already earned, but forbade the R7/1 from racing the rest of the season in its current guise. So Graves went about making the the R7/1 “conform” to the rule book. I have many factory race bikes that are essentially one-off frames, motors, etc that all “conformed” to the rules of the time. Those just kinda bent a steering neck here or there, used “unobtanium” parts but generally looked like the production model. What Graves and his boys came back to the grid with next week was nothing short of masterful manipulation of rules and engineering. They basically covered the existing R7 frame with about 40% the frame rails of a production R1. This allowed the tank to be changed to a stock R1 and then they added a R1 tail section. The skillful addition allowed the team an impressive season that had Buckmaster in first place going into the season finale at VIR. Sadly, Bucky’s bike came down with some engine trouble and he was only able to cross the finish line in 21st place, losing the championship in the process. 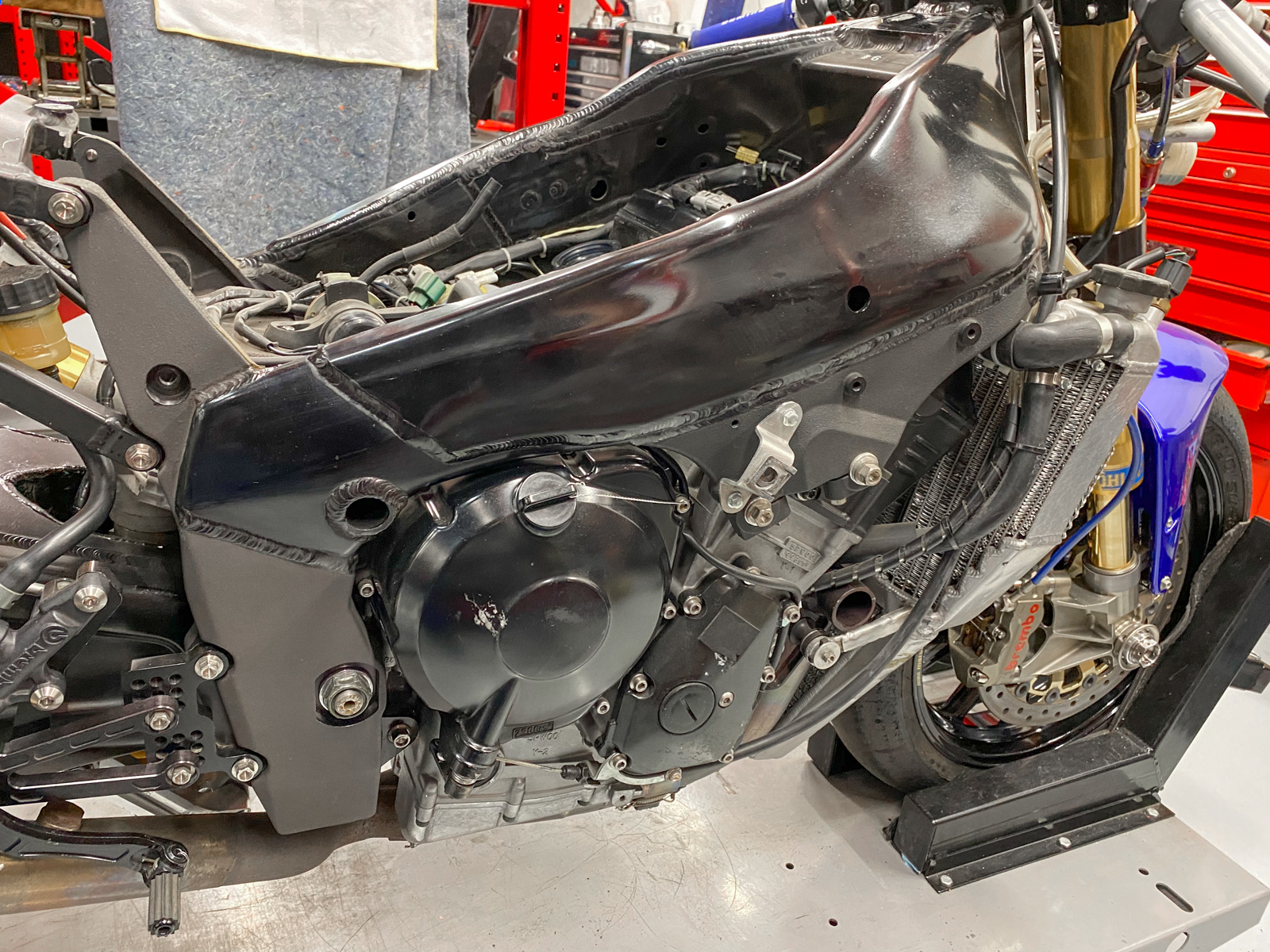 The reason why this bike was so successful is because it handled better than anything else on the grid by a far margin thanks to the extreme bracing of the frame. The front end of the R7/1 is as close to perfection as you can get. The rear speaks to the rider’s throttle input like no other bike I have EVER ridden. I can back this thing into a corner full on the front brakes so smoothly it’s almost telepathic. The front fork is a rare FACTORY Ohlins 46mm USD with magnesium lowers. These jewels are clamped in place by a massive Graves adjustable billet triple tree.

The front brakes are GP-spec Brembo Endurance series with titanium pucks. They are connected to the Brembo radial master cylinder via quick disconnect aircraft style dry brake stainless steel lines. The rear is suspended by a factory Ohlins one-off shock that was originally designed for a Formula One Ferrari. I just had it refreshed and the technicians at Ohlins were asking me how I got my hands on it, as they have never seen one released from their facility. They refreshed it and grudgingly sent it back to me. The frame is really just a R7 factory unit with extreme bracing over the top third of it from the headstock to the mid spar. The rest is all YEC FACTORY kit stuff: swingers, quick change spindles, etc., all from the 8 Hrs of Suzuka YEC R7.

Things really get interesting when we finally get to the motor, as the Graves boys built a true metal giant. Yes, the R1-based 1,078cc, 41mm Keihin fed, carbon ram airbox unit made honking horsepower – over 195 at the rear wheel. But this isn’t a light switch ride that’s ready to flick you into orbit the minute you twist the throttle..far from it. It’s just a wicked smooth progression of power that starts down low and just keeps going on forever. Its a power that is not present in today’s “electronic” bikes. The carburetion is absolutely spot on. No hiccups…just pull, pull, pull. It takes a expert rider to truly wring this thing’s neck but it is extremely forgiving.

Buckmaster signed the tail section, though it has faded with time.

Pete had this bike sitting on display in a large collection for quite some time. As you may know, our Olly had a long career with Graves – he worked there for 15 years and not only wrenched on R7s but owned one or two himself. So there was no one better to bring this back to life. He went through the carbs, checked it out mechanically, cleaned out the old gas from the tank and gave it a very nice detail.

We at Iconic Motorbike Auctions love this bike because it’s a monument of how teams and manufacturers were doing whatever necessary to win back in the day. Now it’s your chance for an incredible track day weapon! 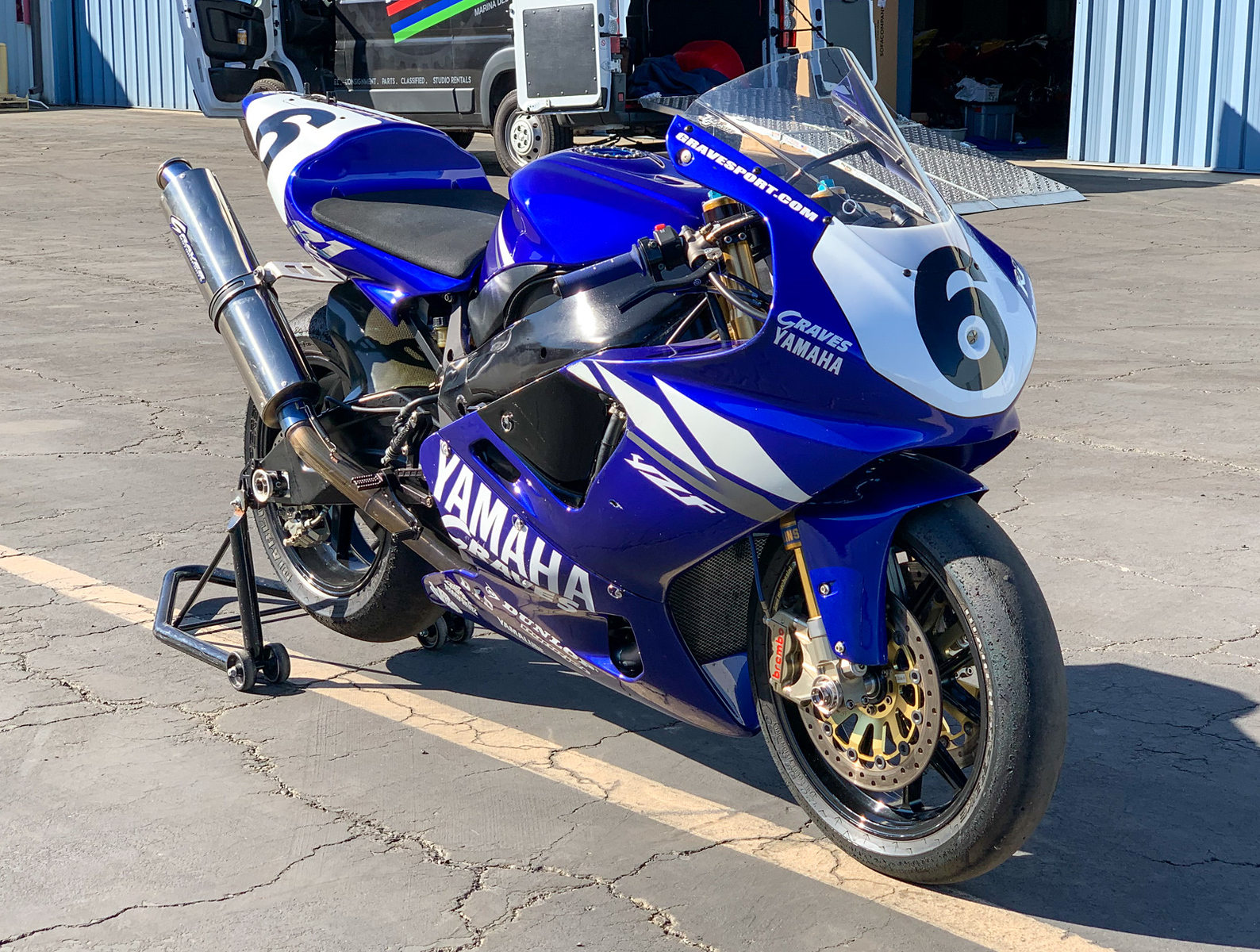