Additional photos of this RSV1000R Nera are available here for your perusal. 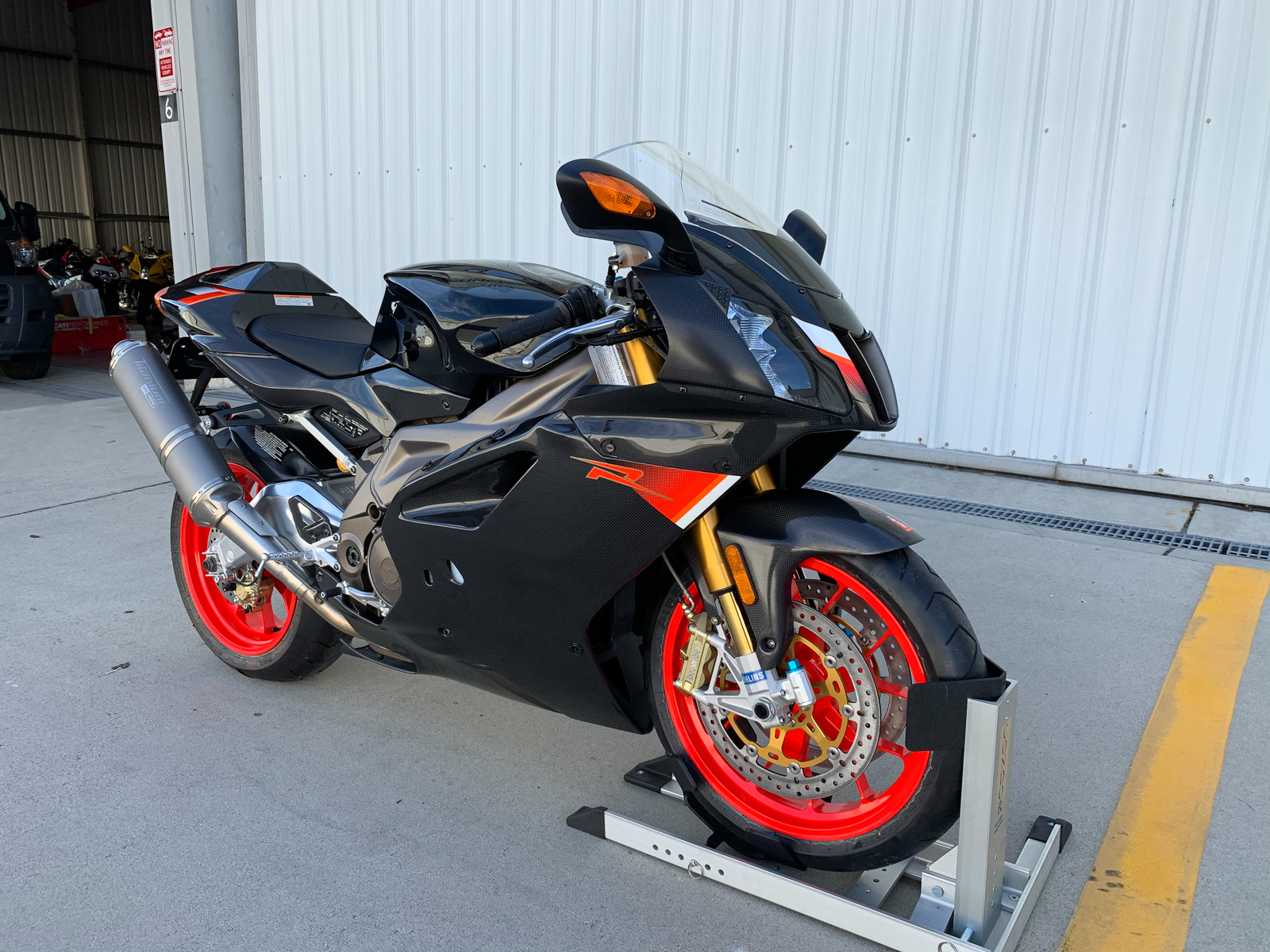 In the early 2000s, Aprilia decided to launch the “Dream Series” of motorcycles and scooters – limited edition variants of their already-impressive machines. At the time, the Italian firm’s highest performing bike was the RSV1000R, so that’s what they used for the platform of the first Dream Series motorcycle – the Nera. Per Robert Pandya, Aprilia USA’s Promotions Manager: “Our Dream Series machines have been designed for the most discriminating enthusiast…while the series will expand into other model lines, it was natural for the RSV 1000 Nera to be the premier edition.”

The biggest visual difference between the Nera and the RSV is the beautiful full set of carbon fiber body panels, though the limited run of bikes came with magnesium OZ wheels, a full titanium exhaust from Akrapovic, and even titanium nuts, bolts, and fasteners – all of which helped to remove over 30 pounds of weight.

According to Motorcyclist, actor (and eventual host of Top Gear) Matt LeBlanc got the first Nera that came to the US. The article also explains that Nera buyers were provided with perks like a trip to a 2004 MotoGP race and the option of a personalized tour of Aprilia’s headquarters in Noale, Italy.

Inside the 60-degree V-twin engine, which Aprilia dubbed the ‘V60 Magnesium +’, the Nera featured magnesium covers, titanium nuts and bolts, 57mm throttle bodies and pistons with a molybdenum disulphide surfacing to reduce friction. 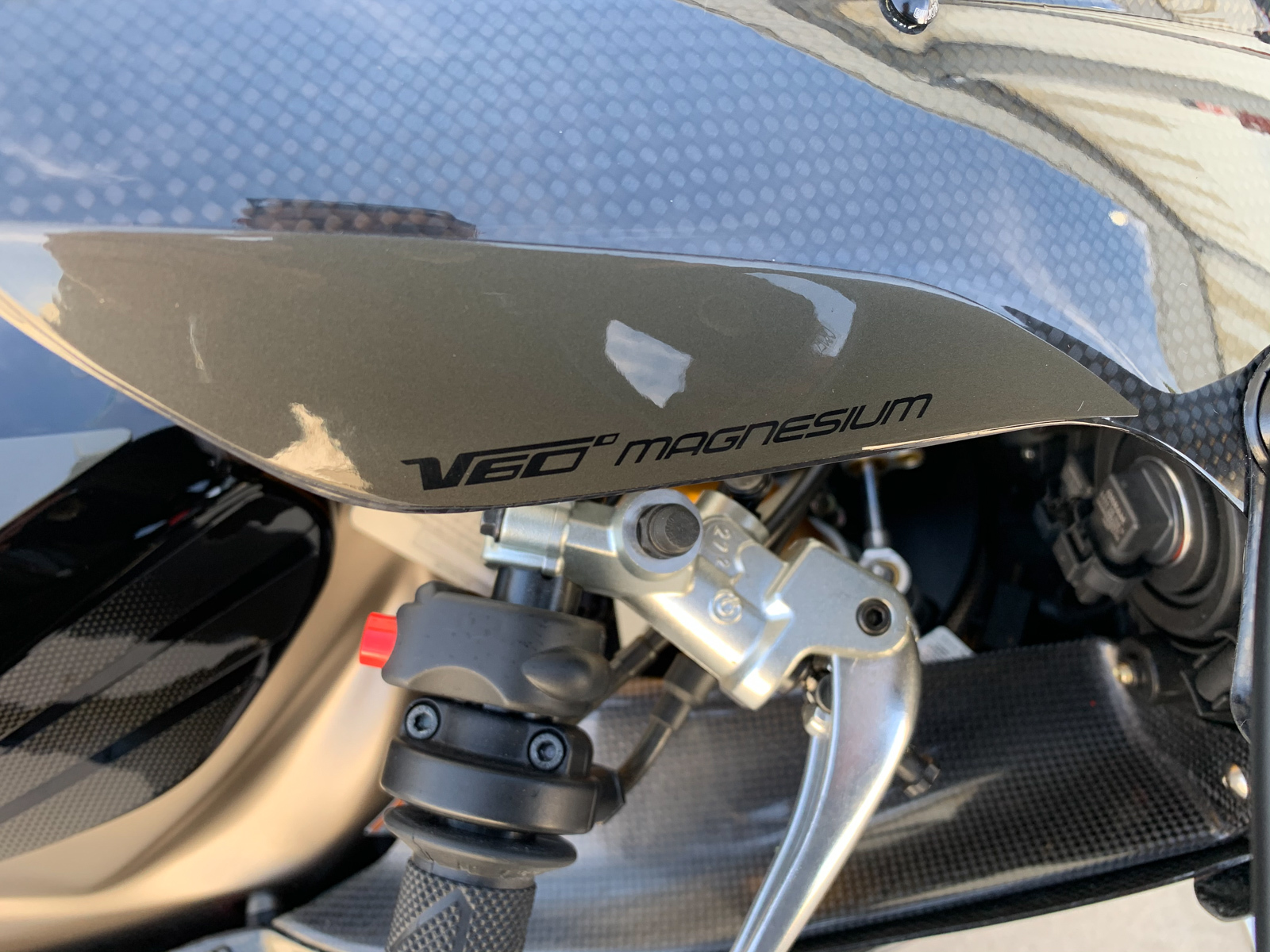 The net result was ~140 horsepower, and thanks to the Nera’s light 386 lb claimed weight it felt like even more. To match this extra go, Aprilia also uprated the Nera with the first radial master cylinder seen on a production bike, which was added to the RSV’s standard radial Brembo brake setup.

All of this glory didn’t come cheap – MSRP in the US was approximately $40,000. Unfortunately for Aprilia, the Dream Series didn’t take off, and the Nera was the first and last of them. 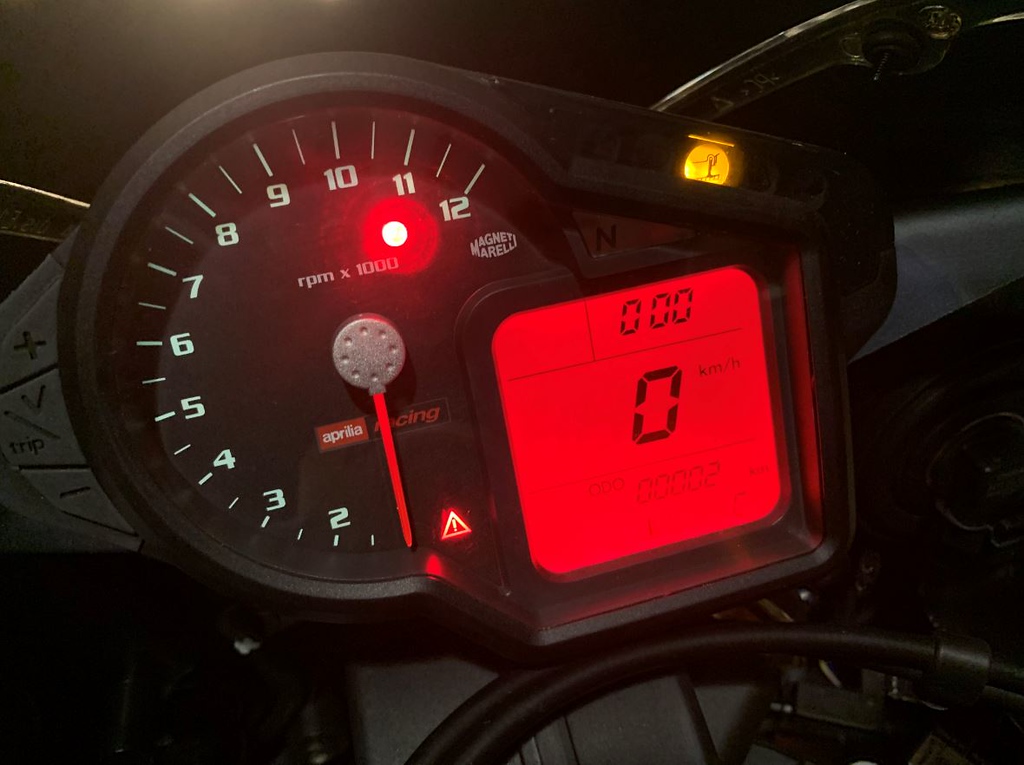 This Nera (VIN: ZD4RRC0274S000026) has just two kilometers on the odometer, and it’s offered with on the MSO as it’s never been titled or registered. The MSO is made out to Detroit Eurocycles in Eastpointe, Michigan (no longer in business), and it interestingly says that the model is a “RSV 1000 Dream”. 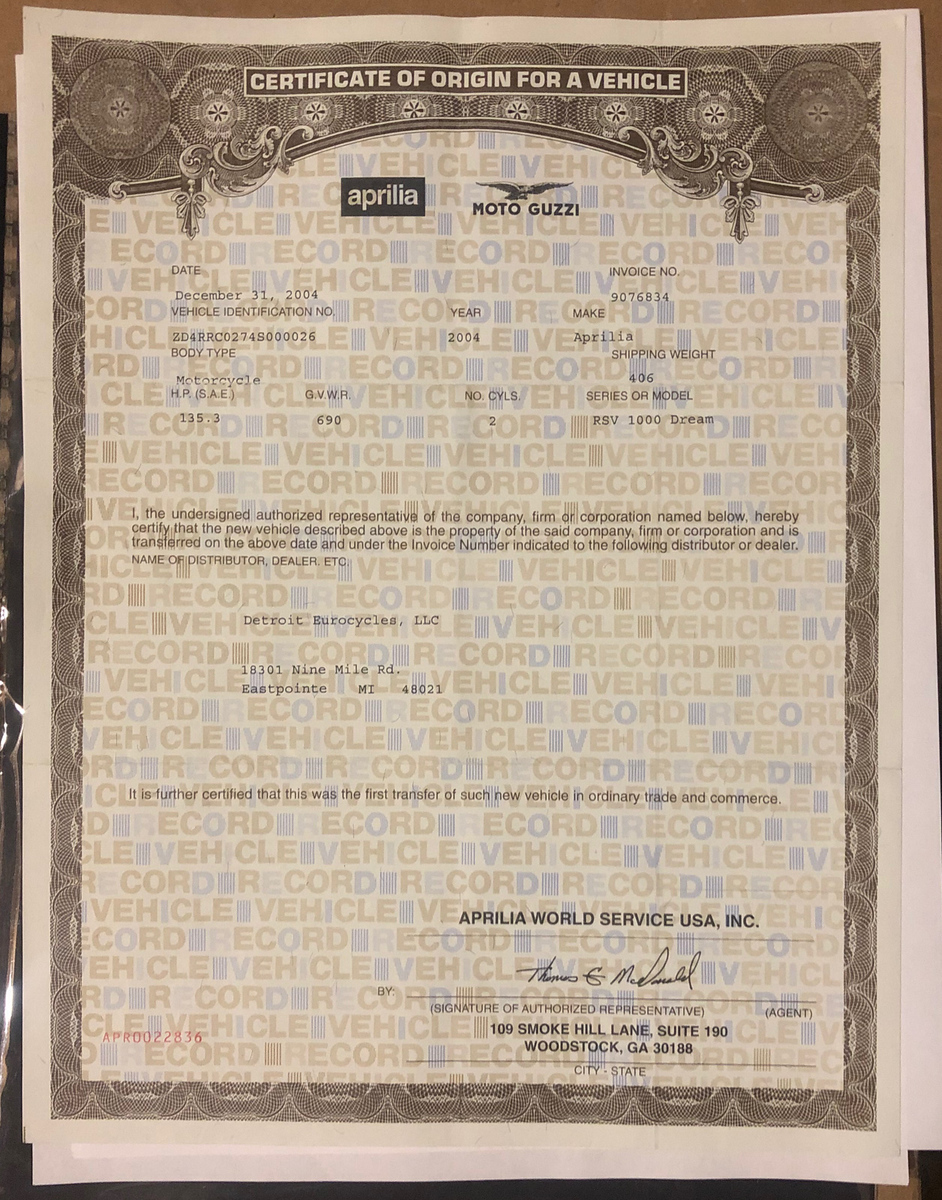 Beyond that, all we know is that it has spent its life in a collection and that the sale includes 2 keys and the Aprilia Racing Akrapovic exhaust. 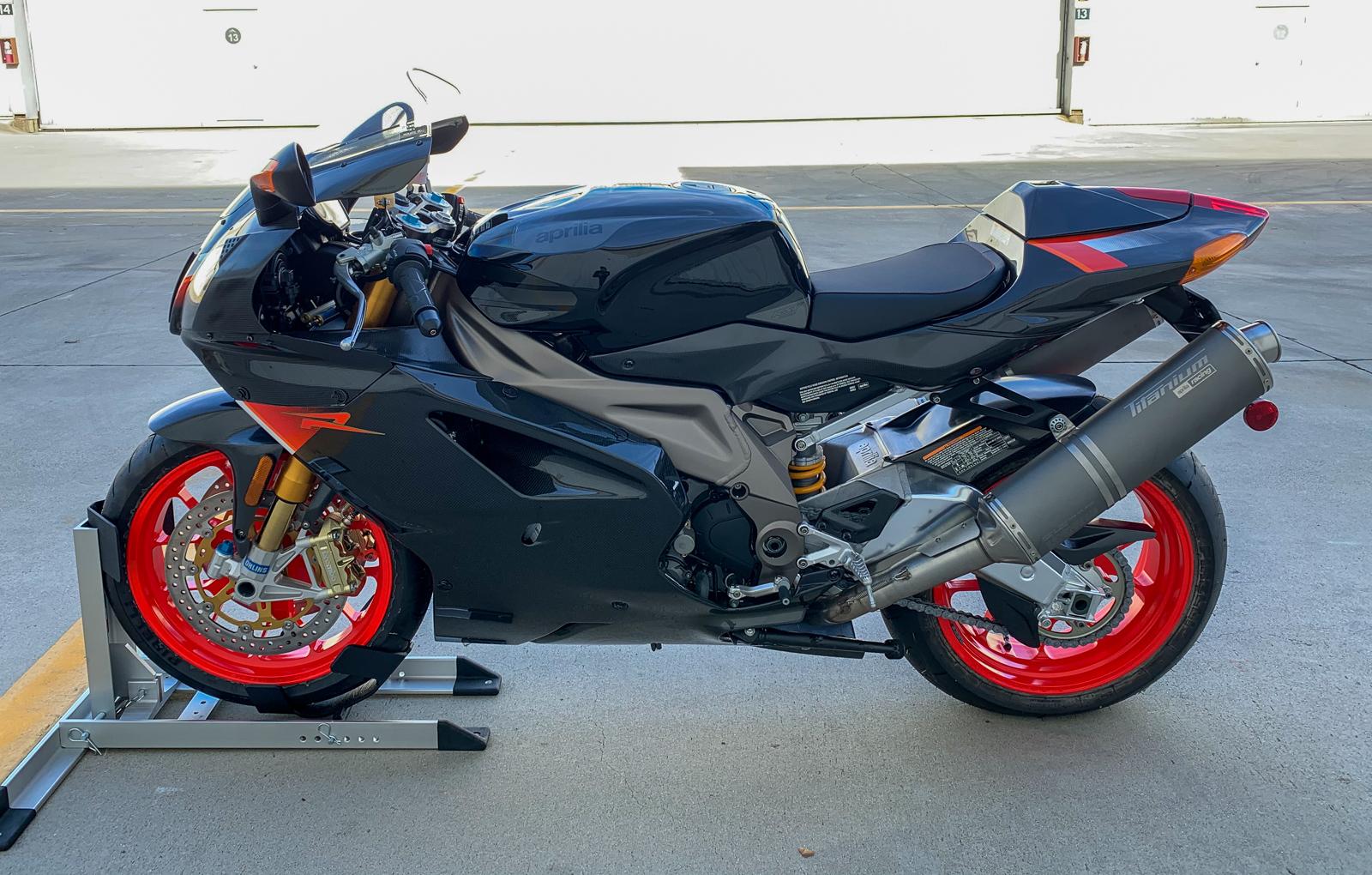 Some questions for you guys… 1) Please clarify if the swingarm recall was carried out? You can read more here: https://www.apriliaforum.com/forums/showthread.php?97870-How-do-I-know-if-my-RSVR-has-the-updated-swingarm. 2) Was the Dash warrantied? Early 2004 RSV bikes have a problem where it resets itself back to 0 km’s/miles. 3) Does the ‘Aprilia Racing Akrapovic exhaust’ include the carbon fiber exhaust hangers, which is part of the exhaust upgrade? 4) Speaking of the Akrapovic racing exhaust, is the ECU software update included? 5) Assumption is Shoes are Original, e.g., 16 years old? 6) Lastly, the following is a clarification for IMA and is not to take anything away… Read more »

EvoluzioneCorse – thanks for your questions! 1. The owner of the bike sourced all the bikes through a broker and really has minimal info. Assume the recall was NOT handled. 2. The bike was crated and stored from NEW so once again, it likely it was not changed out. 3. The photos show the entire bike and the parts that come with it, what you see is what you get…wish there was more! 4. Same as above. 5. Yes, if you’re going to ride, will most certainly need new shoes. 6. Correct, but we’re sorry to say there are no… Read more »