Click here for an CycleVIN Motorcycle History Report on this Bimota DB6 Delirio. Additional photos are available here for your perusal.

One of the better model names in Bimota history, the DB6 Delirio is a naked standard that was part of Bimota’s rebirth once Roberto Comini acquired the firm in 2003. 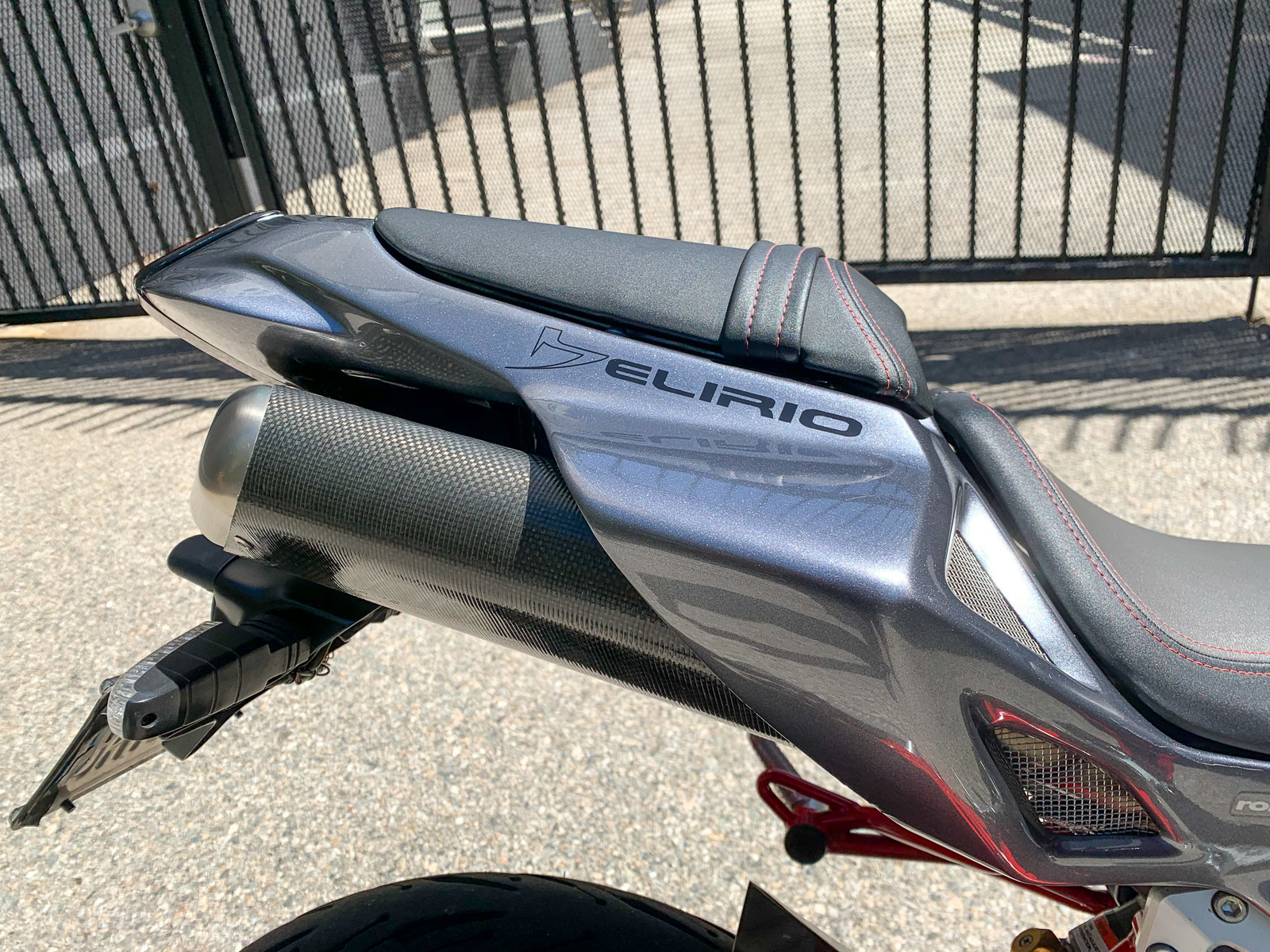 It was the “cheapest” Bimota in the lineup, though it’s hard to call any bike cheap when the MSRP was over $30,000. For that money, you got Ducati’s dual-spark air-cooled V-Twin, good for 90 horsepower and 70 pound-feet of torque.

You also got styling unlike any other Bimota. For more information, check out this review from Visor Down.

This example (VIN: ZESD699237R000038) was accepted as a trade-in by our neighbors at Bartel’s Harley-Davidson, so the history is not well-known, but it runs well and simply needs a new owner to keep enjoying it! The previous owner had a loan on it but the bike has been paid off – Bartel’s is waiting for the title from the bank and will have it in their possession shortly.

9/17 Update: the previous owner has kindly left a comment with more information about this Bimota!
“I purchased this DB6 Delirio from a friend (the 2nd owner) who also has the 1100cc DB6R version and both he and I are meticulous re: maintenance and careful yet “spirited” riders. I have not bombed around pulling wheelies on this bike in like some Superduke owners I know with their bikes. It’s not that I couldn’t but I had wanted this model for a very long time. So why sell it you ask? Well I decided I wanted something different and if I could have kept it, I would have done just that.

Re: the mileage, the original dash cluster went wonky on my friend and Bimota at the time “offered” to sell an updated version. The catch was the price and the entire new chassis harness required, hence the very nice digital and programmable Micro-3 dash. The mileage prior to dash replacement was 3,056. When I bought it, the new dash showed 1,715 for a total actual mileage of 4,771. When I started this process of selling/buying, I believe I had 7,683 total miles and by the time I traded it in, it was around 8,000. It’s easy, just add the current indicates mileage to 3,056 and “Bob’s your uncle”.

This is a very rare, super fun bike to ride and I guarantee you won’t see one very often if at all.”

The one cosmetic flaw we note is the taillight lens, the top of which has been cracked and glued.

Otherwise, it’s a nice example of a rare Italian! Got any DB6 stories or questions about this listing? Let us know in the comments below!

After the auction ended, the high bidder and seller agreed on a price of $10,000 including buyer’s fee. Congratulations!

Has this upcoming year’s registration been paid? I see the tags expired in August.

So I am the recent/prior owner and I thought I’d fill in some details to assist my friends at Iconic and Bartel’s…even if this post gets long winded. I purchased this DB6 Delirio from a friend (the 2nd owner) who also has the 1100cc DB6R version and both he and I are meticulous re: maintenance and careful yet “spirited” riders. I have not bombed around pulling wheelies on this bike like some Superduke owners I know with their bikes. It’s not that I couldn’t but I had wanted this model for a very long time and would not abuse it.… Read more »

Thank you so much for this. We’ve updated the listing to include your information – we sincerely appreciate it!

Curious if there is any service history on this bike? I think at its mileage it’s due for the first big service.

Happy to answer anyone’s questions about riding these. I have 10,000+ miles on mine.

I notice a non-original dash. Do you know if the indicated miles on the new dash are correct, total miles?

Seller has both dashes. Adds up to about 8500-8000 total miles. I know this bike as it’s local. I will warrant that he’s correct in mileage estimate

Thanks for your question – the listing has been updated to reflect Adam’s answer.

Thanks guys for the mileage clarification

Thanks for your question, however we do not reveal reserves while an auction is live.