Click here for an CycleVIN Motorcycle History Report on this 2007 Ducati SportClassic 1000 Special Edition. Additional photos are available here for your perusal.

In 2007, Ducati released a limited edition of just 100 SportClassics exclusively for the North American market. Called the Special Edition, it combined modern tech with traditionally-inspired design that was designed to remind Ducati fans of the 1978 900SS Darmah with its classic black and gold paint scheme. 90 were sold in the US, and 10 were sold in Canada.

The Special Edition is one of the rarest modern Ducatis, and they were sold as Monopostos with an identification plaque on the triple trees. Other modifications to make this bike unique included spoked wire wheels, twin muffler shotgun exhaust, and one Ohlins shock (as opposed to the dual shocks of the other SportClassics) to make room for said exhaust.

Here’s the seller’s story:
“I purchased this 2007 Ducati Sport 1000 SE #93/100 in October of 2013 while I worked prototyping vehicles at Tesla Design in Hawthorne, California. The bike was originally listed on eBay, I believe we finished the sale there as well. The bike was located in Brooklyn and the odometer showed 2,881 miles, owned by a chef who was pursuing new ventures. The seller had a good relationship with the Ducati dealer in SOHO, who knew the bike well, so I called the dealership to verify that the bike was real. The seller shipped the bike across the country via U-Ship, the keys and title showed up a few days before the bike arrived in a horse trailer!

The worst flaw in the paint is a scrape in the right side swing arm near the exhaust. The previous owner tipped the bike over, the paint scrape was not repaired but the Termignoni exhaust muffler was replaced. 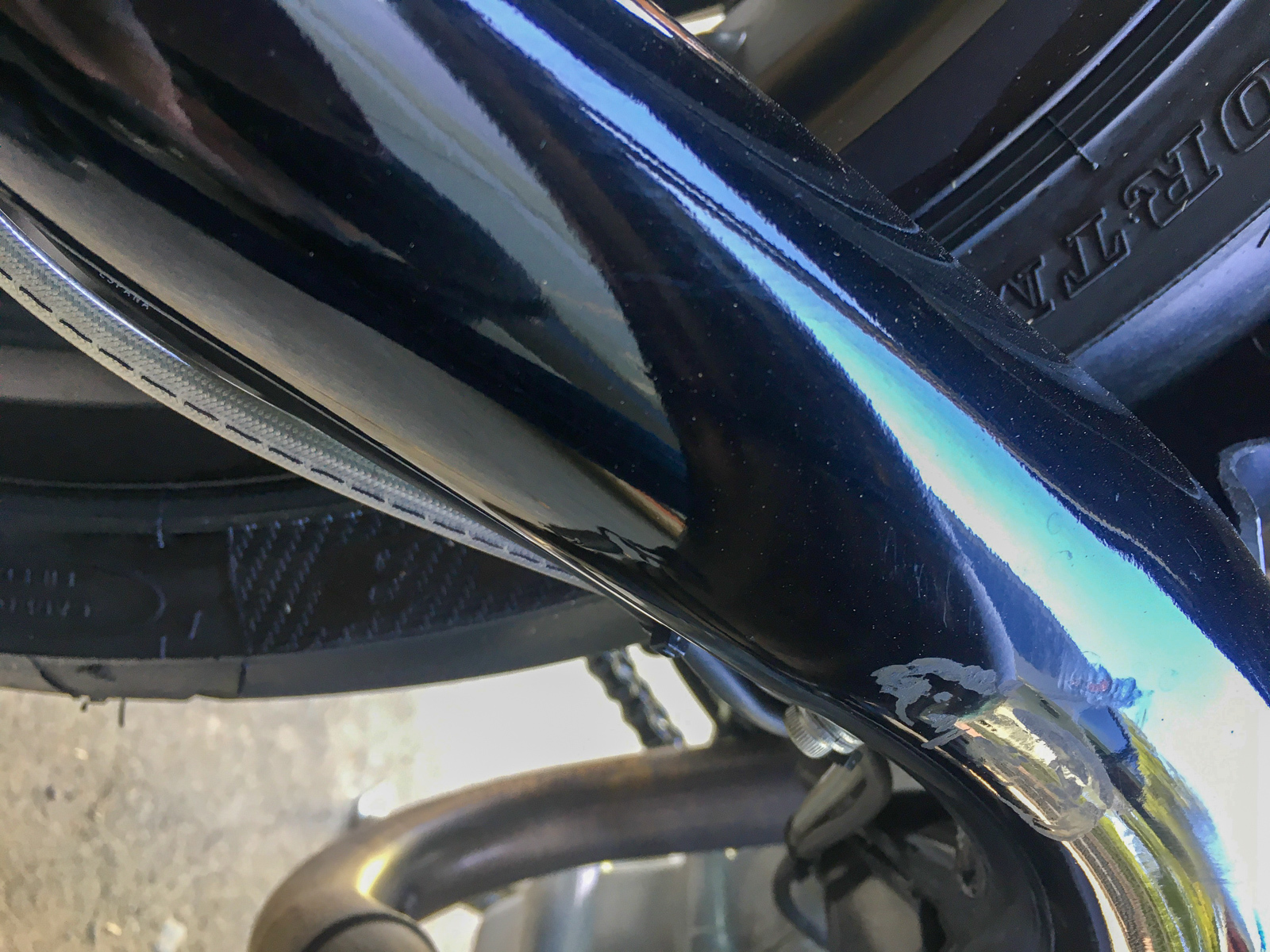 The bike has always been stored covered in my garage (indoor cover included).

While stored during the last year, the fuel pump seized. I replaced the fuel pump and associated fuel system rubber parts: fuel filler o-ring, fuel flange o-ring, vent hoses and quick disconnect fuel fittings with clamps. In tandem with this work, I flushed the fuel injectors to insure the fuel system was at its best. These used parts can be included as the buyer may have interest in their replacement. In 2018, the tank was professionally coated using Rhino 9700, sourced from Aircraft Spruce.

Some of the chrome has corrosion, mainly on the cam covers on each side of the engine.

The fork caps are peeling chrome plating, not an uncommon sight on these motorcycles. I have cleaned corrosion off of mounting hardware where maintenance was completed.

Included is a Google spreadsheet detailing the parts that came equipped to the bike, parts installed under my care and the current maintenance completed. I had A&S Motorcycles in Sacramento, California install new timing belts, check and adjust the valves and sync the throttles. I didn’t complete this work because purchasing the special tools required could equal the cost of getting the service completed at a Ducati dealer. A benefit of having this service done at A&S Motorcycles is that they get to see the bike in person, complete a full inspection and recommend repairs. The throttle sync was recommended due to a slightly erratic idle speed. A&S Motorcycles completed these repairs after my maintenance repairs, so the inspection represents the Ducati dealership’s assessment of the bikes most up to date condition. Side note: the bike low oil temp warning turns off after roughly 5 min of warm-up on a cold start:
https://www.youtube.com/watch?v=pFus45YXbQY&feature=youtu.be

This Ducati Sport 1000 SE has neat parts that I have never seen equipped to a Sport 1000. I sourced Alpina STS tubeless wheels from JC/PAK Bikes in Pasadena, California. The wheels are mounted with Dunlop SportMax Q3 tires with less than 50 miles on them. I believe the spoked wheels respect the original design, reduce rotating weight and add remarkable gold anodizing. 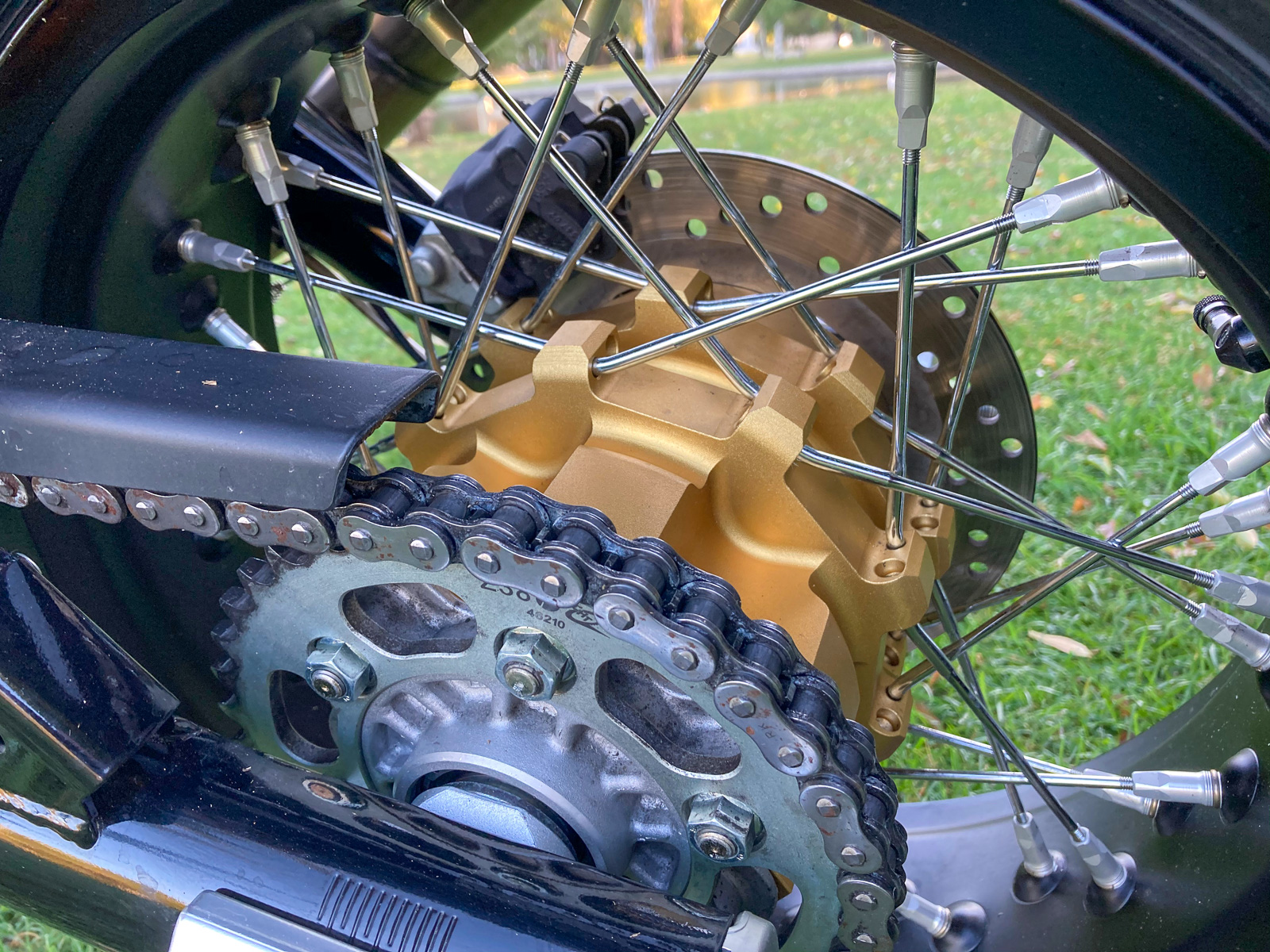 I installed Rizoma Reverse Retro mirrors to fix the loose fitting OEM mirrors. The Ohlins side mount steering damper was equipped when I purchased the bike.” 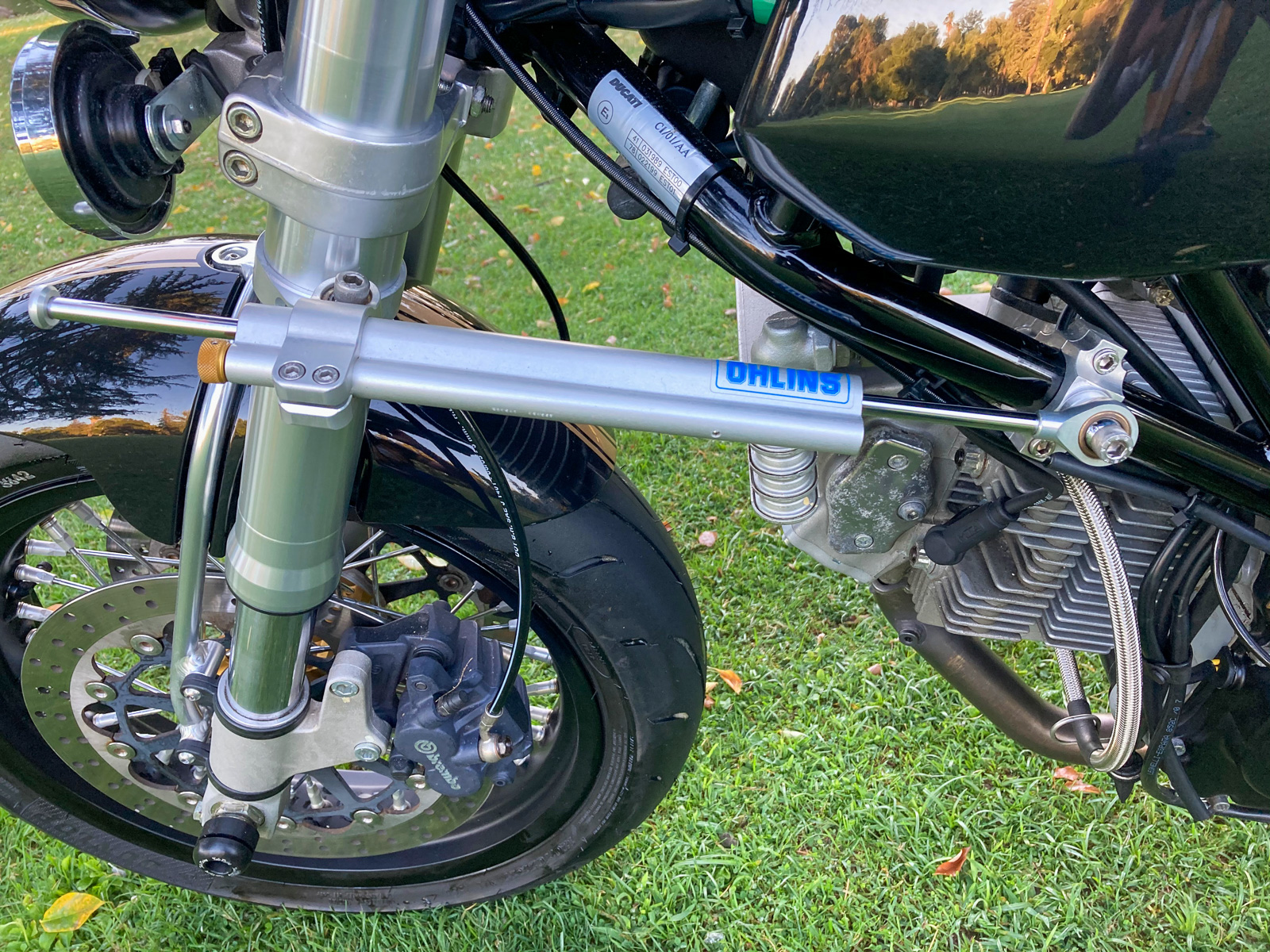 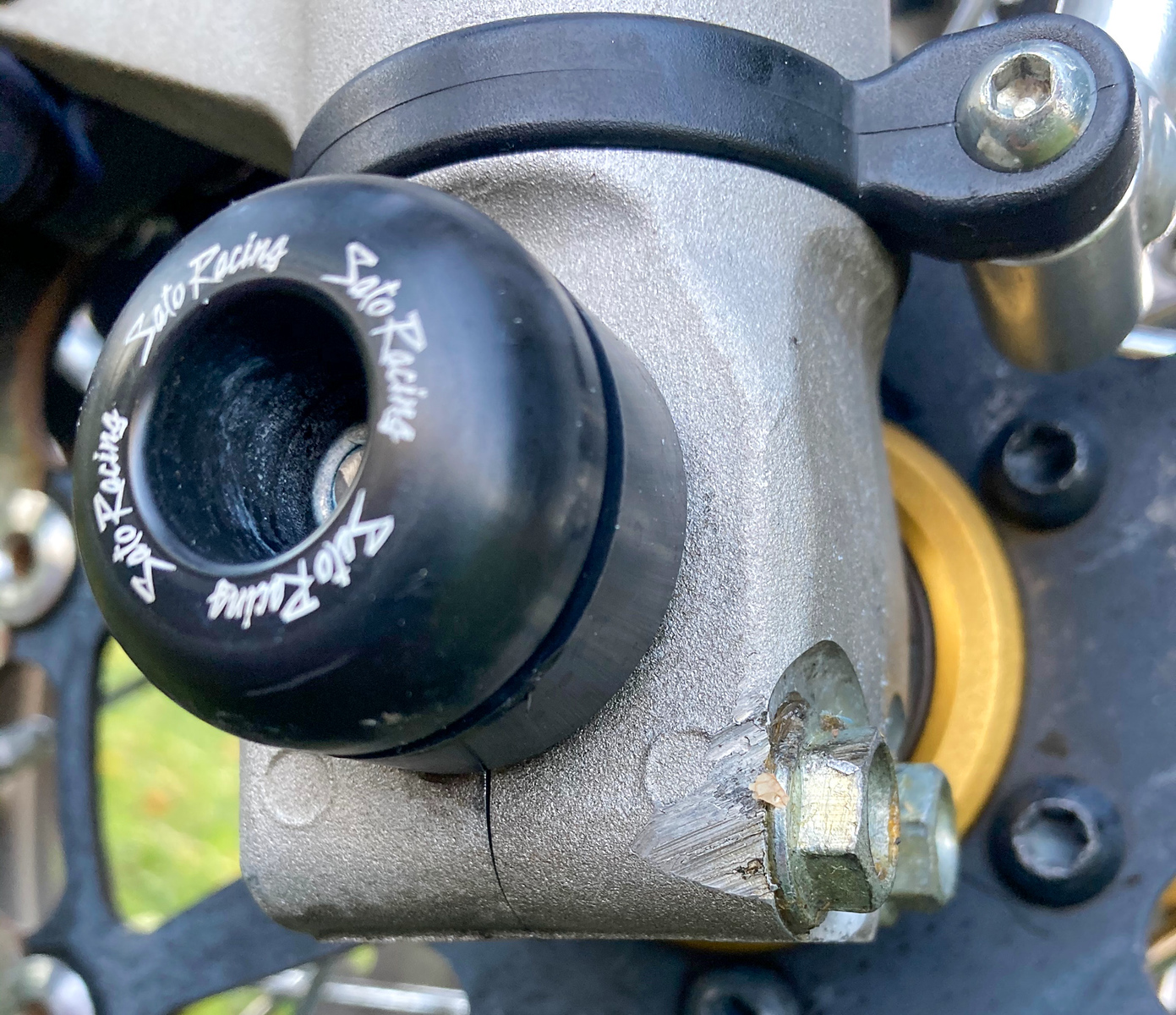 There are minor scratches on the Dart flyscreen as well as the seat cowl, front mud guard, and right side of the fuel tank – the seller includes photos of all cosmetic blemishes in the album up top.

It also includes the OEM seat, rear sets, and wheels, the last of which have some rash.

The seller concludes: “The bike has all maintenance completed, needs nothing, and is ready to ride. I’ve spent my career making stuff. My professional career has consisted as a BMW Master Technician, Tesla Integration & Prototyping and my career continues with electrical engineering and integration work in Sacramento and LA/Hawthorne. That said, I’ve completed much of the work on the bike. I have a strict view on quality and proper procedure. All work has been completed with OEM technical repair manuals, proper torques, recommended chemicals, OEM parts or the best aftermarket parts. I love Ducati motorbike designs, but the Sport Classic / Sport 1000 SE strikes a chord in me that few other bikes can. I’m living in Sacramento and riding my Husqvarna FE350 daily and off-road regularly. This Ducati Sport 1000 doesn’t fit my current lifestyle; and at the moment, I’m not in a position where I need any collectible vehicles. By only adding 270 miles (3,151 miles total) to the bike in nearly 7 years, I have been a great steward of this bike for the next potential owner.” If you have any questions, let us know in the comments below!